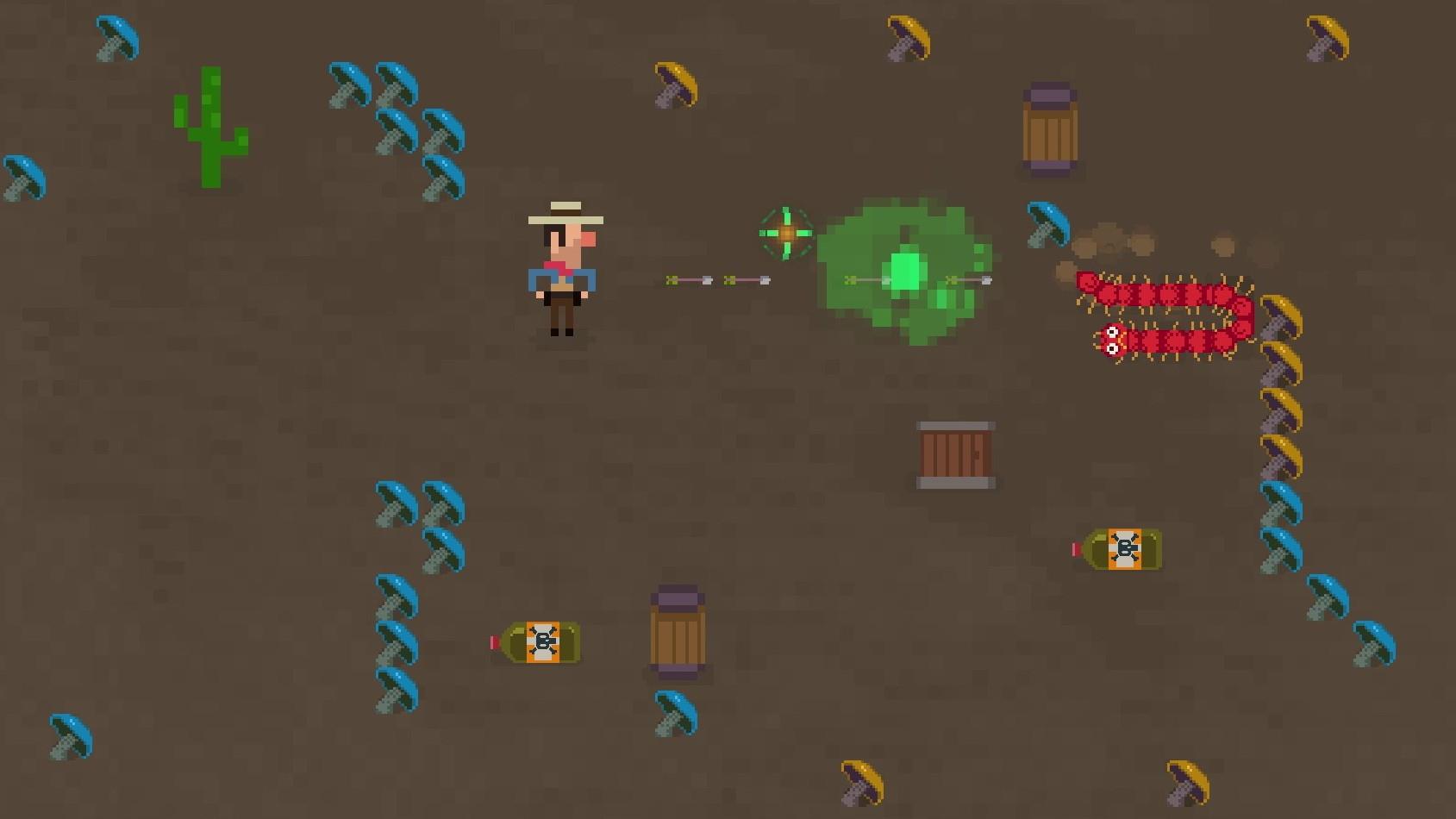 I have stated in many reviews that Atari makes some of the most difficult games ever made. The company has been on a roll with it's Recharged series of it's old arcade and Atari 2600 games, which takes that stunning difficulty, modernizes it, then turns it up to 11. The history behind these games is that the programmers used the resources available to them, and still made competitive and challenging masterpieces. Some would tell you "it's all we had", but it was much more than that. With a control stick and a button, you could drive cars and tanks, fly airplanes and spaceships, rescue humans, slay dragons, and pick up jewels. And of course, there were some games you would shake your head and fist at, but you kept going, because there was no way this game was going to defeat you. Now, in 2022, the programmers have more resources, and the level is up to 15. Welcome to Atari Mania!

Atari Mania is developed by Illogika, and the story goes like this: You are the Caretaker, and you are on your way to work your shift at the famous Atari Vault. Your job is simple. Make sure the characters, or "performers", report to their games when needed. The Caretaker loves his job, and he loves being there every day. But on this day, the performers are starting to panic. Pete from the game Outlaw greets you as your shift begins. You find that Milli of Millipede is not in its game, and you have to gather Milli and get it back into its game. When you follow Milli back into the other room, you see it being swallowed by dead pixels. And they have taken on their own characteristics. These are your main enemies, and you find out that Bentley the Bear from Crystal Castles is behind this whole thing. He is tired of performing for "us", and he has decided that he will destroy the Atari Vault, unplug all games, and free the performers from it's forthcoming unplugging.

The game kicks you off in a top down view, you controlling The Caretaker, and talking to other characters. You also pick up two items out the gate. A broom, to sweep up dust, and a magnet to move metal things. You also find a poster, which doubles as a Atari 2600 cover, Video Olympics. Right away, the game teaches you that you will use these items in the vault, and collect the posters/video game covers. The items are important for the progression of the game, and the game is very efficient in making you recognize that. As soon as you get an item, the descriptor tells you what to do next. It's a pretty fun throwback to see the covers of these games. For instance, the cover of Millipede shows the antagonist, and it shows the protagonist is indeed an archer, and I was today years old when I discovered that. The covers are a hint of things to come. More on the minigame madness later.

Now, back to the dead pixels. Again, they are here to destroy the vault. And this is the first and last time I will say it: Atari Mania WILL remind you of Wario Ware. Hands down. Except, these are Atari games.  And instead of playing mini games at super speed, some of the Atari mini-games are longer and more drawn out. When you come in contact with a pixel, they give a little background of what they are, and why they are antagonizing, before the mini-games start. The minigames usually cover three full Atari 2600 games per session. This particular session has 10 levels. The first 3 levels are always a quick demo of each game. Millipede, Swordquest, and Video Olympics are first. The game will give you instructions before you start each game; these are goals you must achieve within a time limit to move forward. For instance, the instructions are to shoot down a Millipede, so you shoot down a Millipede, and voila, success. Video Olympics may have you play pong for a bit and win, while Swordquest will have you point and click the item you need.

Imagine for a second that you are playing one of the hardest games ever, and then you have to speed run it. That's what this is. You play pong, and you have to score within 20 seconds. Or you have to lead your track runner to a certain place within 15 seconds. After the first three levels, they start MIXING UP THE GAMES! The fourth level may have you use a pong paddle to block shots from killing the Millipede, or it may have you run the track star to an item in an Swordquest level.

These can be stressful if you let them, and sometimes the instructions aren't obvious. Read them carefully before hitting the button. You have a certain amount of lives to complete each session. So for this first, you'll have 5 lives to complete ten levels. If you beat a level, you advance to the next. If you fail a level, you still advance, but you lose a life. If you lose all your lives, it's game over, but Atari Mania only kicks you back out to the vault. Keep in mind, you will fail. These are Atari games, after all. If you do get to the end of a session, it becomes a boss level, where all three games may be featured to take down the boss. This is the meat and potatoes of the game. The mania, if you will. 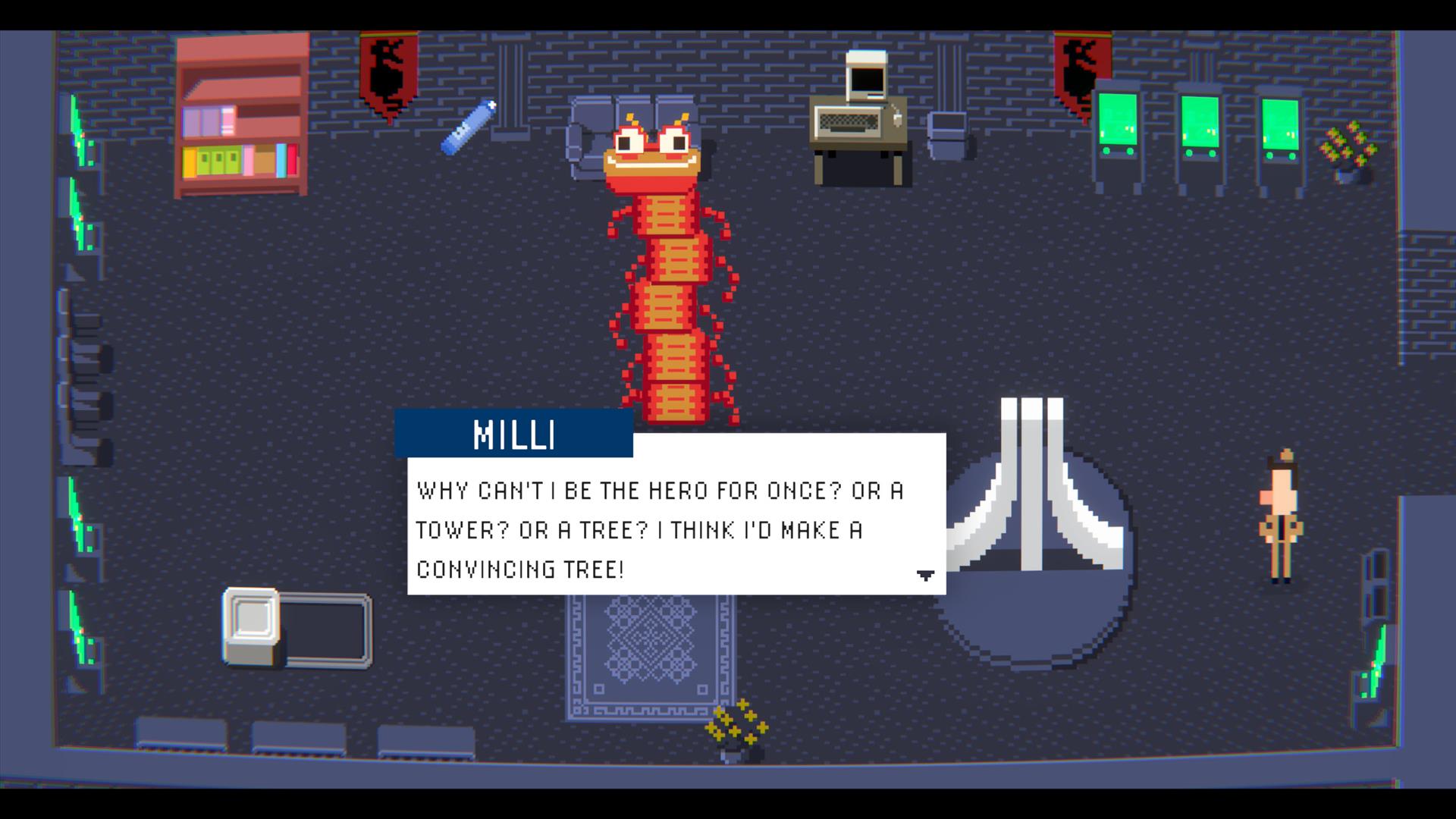 With the boss destroyed, you are kicked back into the vault, and given some back and forth with the character you just saved, and the cameos here give a lot of charm to the game. The caretaker also takes pride in his very VERY bad jokes, and even warns you that they don't get better. Then you will receive another item for your sub screen. These items will help you navigate through the vault, and let you into places that you couldn't get before. You may use a grappling hook to pull something, or a wrench to turn on a bridge. There are so many things you can do in the vault, and so many characters to talk to. The posters are neat, because when you zoom into some of them, you can tell they've seen better days. The coolest thing about the vault is that you can complete most of the puzzles without the item you need, and then once you get that item, you just go back and add it to the puzzle without doubling back too much. Pour something in the pipes you arranged earlier, and there's a new path. There are keys, levers, switches, dark places, and more. The vault is full of puzzles and nostalgia. You have to find all the dead pixel bosses, while tracking down Bentley, and get more of that sweet, sweet story. 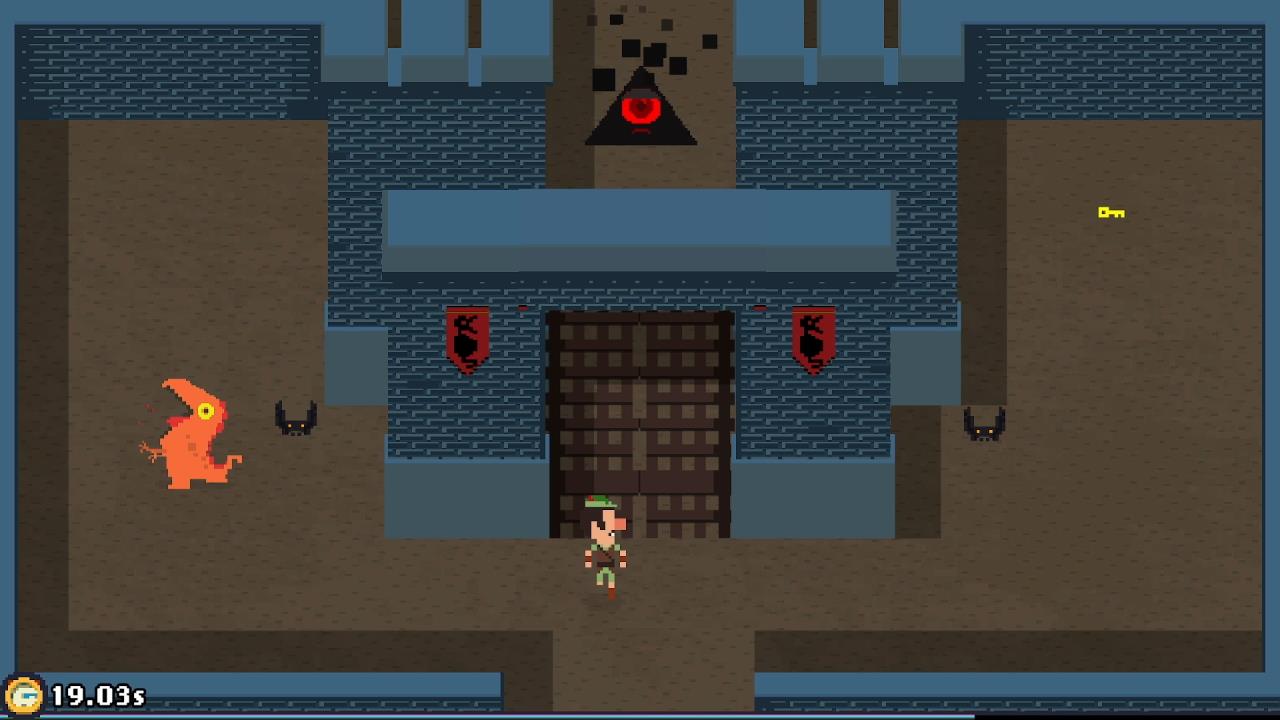 There are over 150 mini games total. And you may not see all of them in one session. If you do fail, and restart, you will not get the same mini games every time. The only thing that stays the same is the boss, and the boss is the hardest one. If you fail at the boss, it pushes you back 1-3 spaces, and makes you play those minigames all over again, except they're not the same either. It is pretty cool to see these 2600 games in a updated, but still retro aesthetic. Fop instance, I finally know what the demons in Demons to Diamonds were supposed to look like. The buildings in Missile command all look different, and stand out, and Gravitar is here, too (Ugh).

The controls are a little wonky at first, as there is a slight delay with all button pushes and controller movement. Yes, just like the 2600 games. Just know that if you shoot at an alien, or eject a parachute pilot from a plane, it will not come out instantly. And hit boxes? Forget about your hit boxes. Atari doesn't care about your stankin' hitboxes. If an enemy wants to hit you via explosion from across the screen, it's going to happen. Fail. In big, red, obnoxious lettering, because you moved ever so slightly to the left, and the gunman from Outlaw shot you in the face. There is a bit of luck here too, sometimes in mid panic. Also, the tank controls (up to move forward), and a button press to accelerate or blast off in your ship, are completely gone. If you want your tank to go down, go down. If you want your asteroids ship to shoot an asteroid, best of luck to ya. And here's a Easter egg. With Pete, shoot the "1". Thank me later. 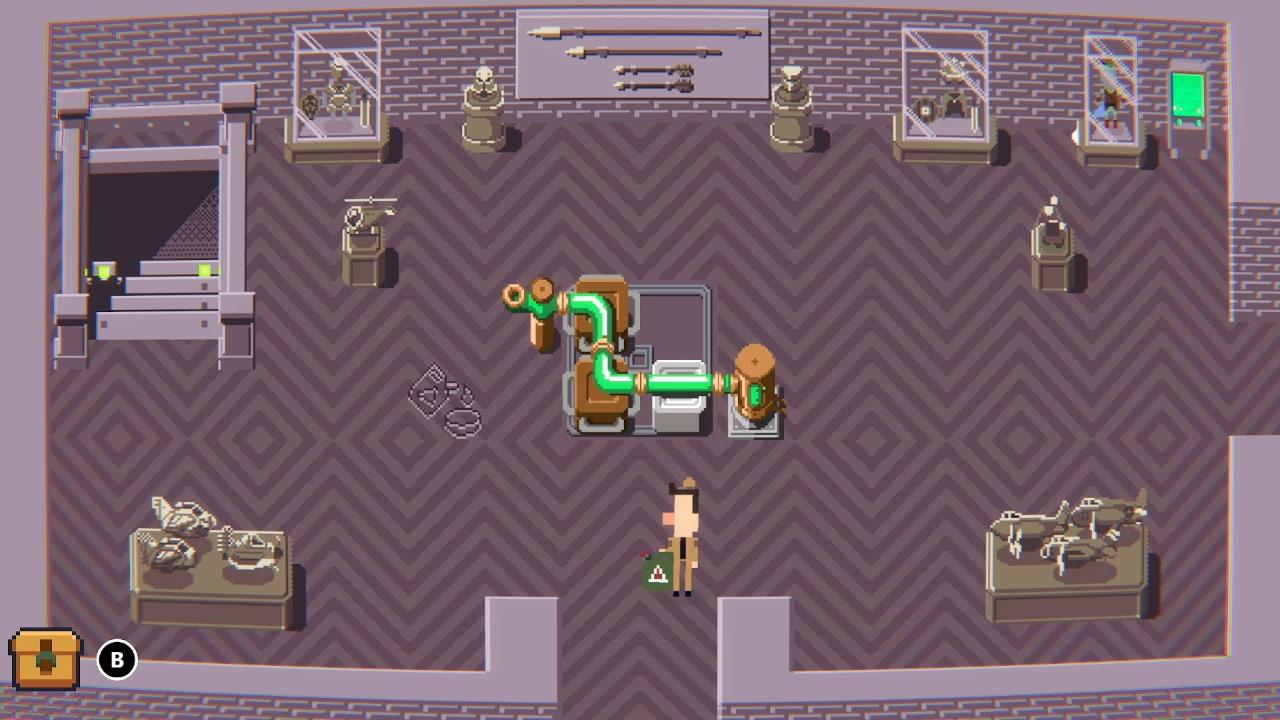 To add to the collection, you can also find game manuals, and these are found via the mice in the walls. If you grab a piece of cheese, you can go to any mouse and play it's version of minigame madness. These are hard, but they're only mini games based on the universe of the game manual you're looking for. You will sometimes have one life to beat four levels in a session, and I believe one of the instructions was "play pong and don't get scored on for 60 seconds". You have 25 game covers, so that means 25 game manuals. And they aren't easy in the slightest. There are also mini arcades that appear once you beat a boss. These have longer sessions, and they inform you from the outset that you're playing for fun. From what I understand, I got nothing for doing these, but I didn't get through all of them.

You will use all your items, all of the time. You will play through every game, and you will lose A LOT. The game isn't that long, and you will spend most of your time trying to make it to the final boss with no or very little lives lost. Even after the credits rolled, I was only at 75%, but it felt good, even though I knew those mice are the reason it wasn't a 100 piece. I also don't know what happens if I 100% it, but I'm sure I will soon. I enjoyed all the reimagining of these 2600 games, and even went back to one of my old Atari compilations to play the less familiar ones. I had never played Adventure, and Haunted House still scares me. It's those eyes.

Atari Mania is not going to have an issue finding its own audience. There are gamers out there who are historians and will get a kick out of it. With 150+ minigames, and some very challenging unlockable items, it will keep you busy. These are the hardest Atari games rolled up into one charming, nostalgic mini-game extravaganza. Grab this one if you like that good ol' Atari pain.