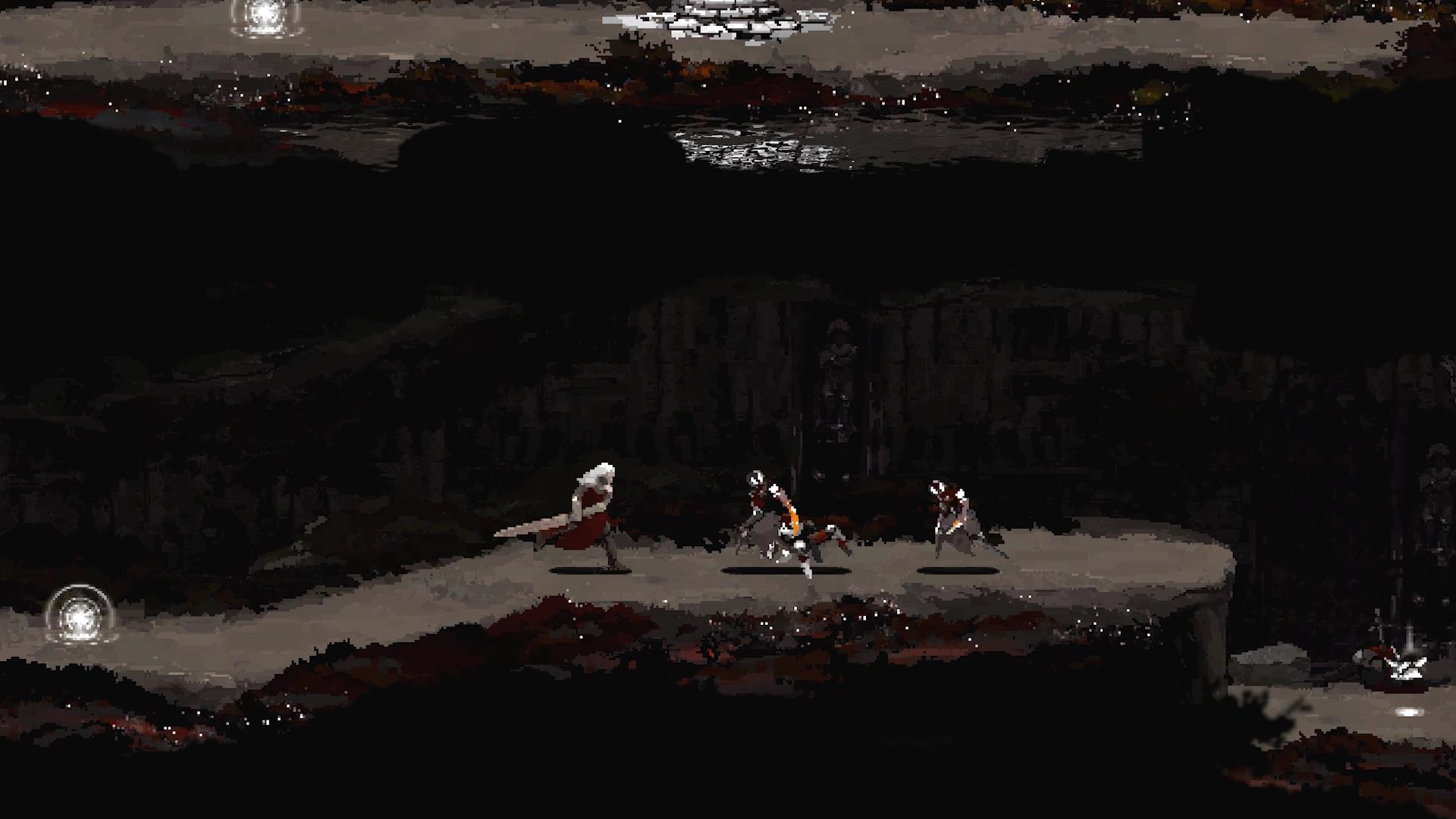 Metroidvania: (Compound word of Metroid and Castlevania) A genre of game that is usually side scrolling, with some basic but upgradable weapons. You upgrade these weapons by finding them in game, or buying them with in-game currency. There are characters within said game, some memorable, who are important to the story and plot of the game. Again, these characters can be found throughout, or introduced to you in the beginning. And for those of you reading, thinking "Why is he explaining this?", this isn't for you. With all that out the way, Humble Games and Black Mermaid recently released their new 2D side scrolling adventure, Moonscars.

Moonscars starts you off with a cutscene surrounding The Sculptor, and his talking cat, Etilag, explaining that he (The Sculptor, not the cat) has been able to create clay copies of human beings, with bone powder and ichor (def. GREEK MYTHOLOGY - the fluid that flows like blood in the veins of the gods). These creations are exact copies of their human counterparts, with the exception of having any feelings or emotions. However, they eventually go mad and either die and are recreated, or "cleft" and try to kill their human counterparts. Grey Irma is ones of these "Claybornes", and she is the one who you begin your story with. She was one of 7 pristine claybornes, but she is now 1 of 5, and she is looking for answers, which is something Claybornes aren't meant to do. You get all that? I may be wrong, because I was super confused. More on that later. 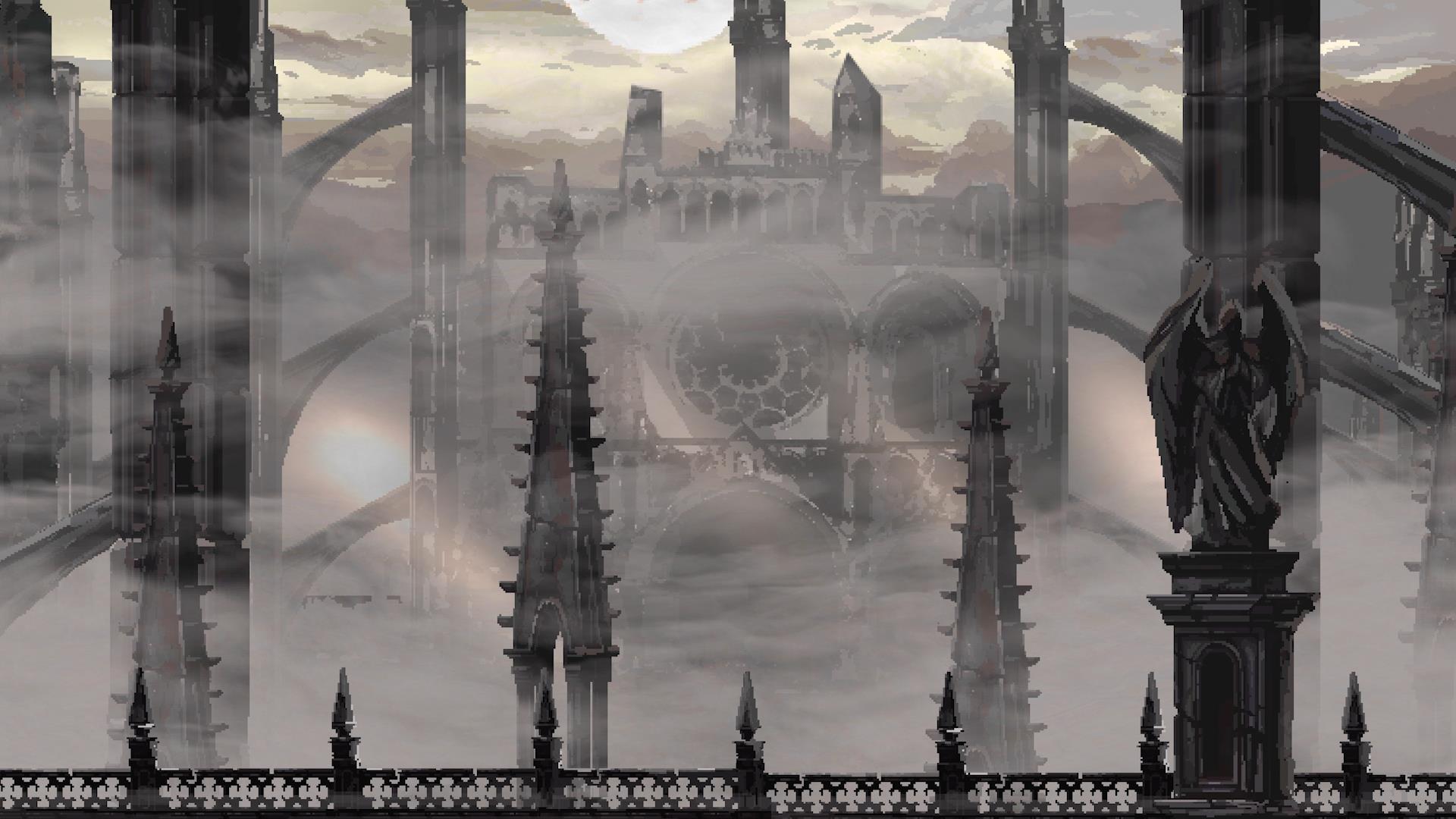 Grey Irma knows a lot in the game right out the gate. She is armed with a sword, which can do a nice three hit combo with three taps of a button. You can also hold the button for a more powerful, yet slow slash, and this pushes enemies back. She has a dash, which comes with a bit of invincibility at start up. Her jump is short, but she can easily grab a hold of things above her if they are within her reach. This includes platforms, and different chains and ladders throughout the area. She can traverse up walls too, just smacking the jump button against them. She also has a parry, which works half the time, because it has to be perfect. This parry is coupled with an automatic counter, and it also pushes back. Even with all this, she can use the environment to destroy the evil and ENDLESS Claybornes, pushing them into spikes, or making stalactites fall from the ceiling. Irma is just a 'mould' though. She's not the real Irma, and so therefore, she cannot take a punch. Four hits, and it's all over. And those hits come quick from multiple directions.

Fear not, for Irma has even more offense available. The first comes via a learning tree of witchery. Throughout the game, enemies will drop bone powder upon. You can also find this stuff just laying around throughout the game. Every time you encounter a dark mirror, you can access this learning tree. You have two slots for witchery, and you can use a magic stone for starters, but you can get all the way up to a level three doppleganger, who will beat down all your enemies for you. The learning starts off cheap, but gets rather expensive as the game goes on, but using these are worth it. They use up ichor, and you can regain ichor by defeating enemies. There are some places you cannot reach without using witchery, and there are enemies who are much easier without witchery. Use it as often as you like. Ichor also allows you to refill your life at anytime. You can't move during this process, and you are not invincible, so don't be afraid to run away from monsters, and start fresh.

Every enemy you defeat adds to a progress bar at the top right of the screen. When that bar fills up, you get a choice between three boons. These could instantly refill your life, or make the process of regaining life faster. You can also up the chance of critical hits. You can have up to five boons running at a time, and these help you immensely. Eventually, you will receive a special attack, which has a super slow start up, but comes with ridiculous attributes. The hammer stuns, the sword chips away at enemies health. These sometimes even come with bonus health and ichor, and you only get one. You can relearn one in the mirror menu with the game's second currency, glands. 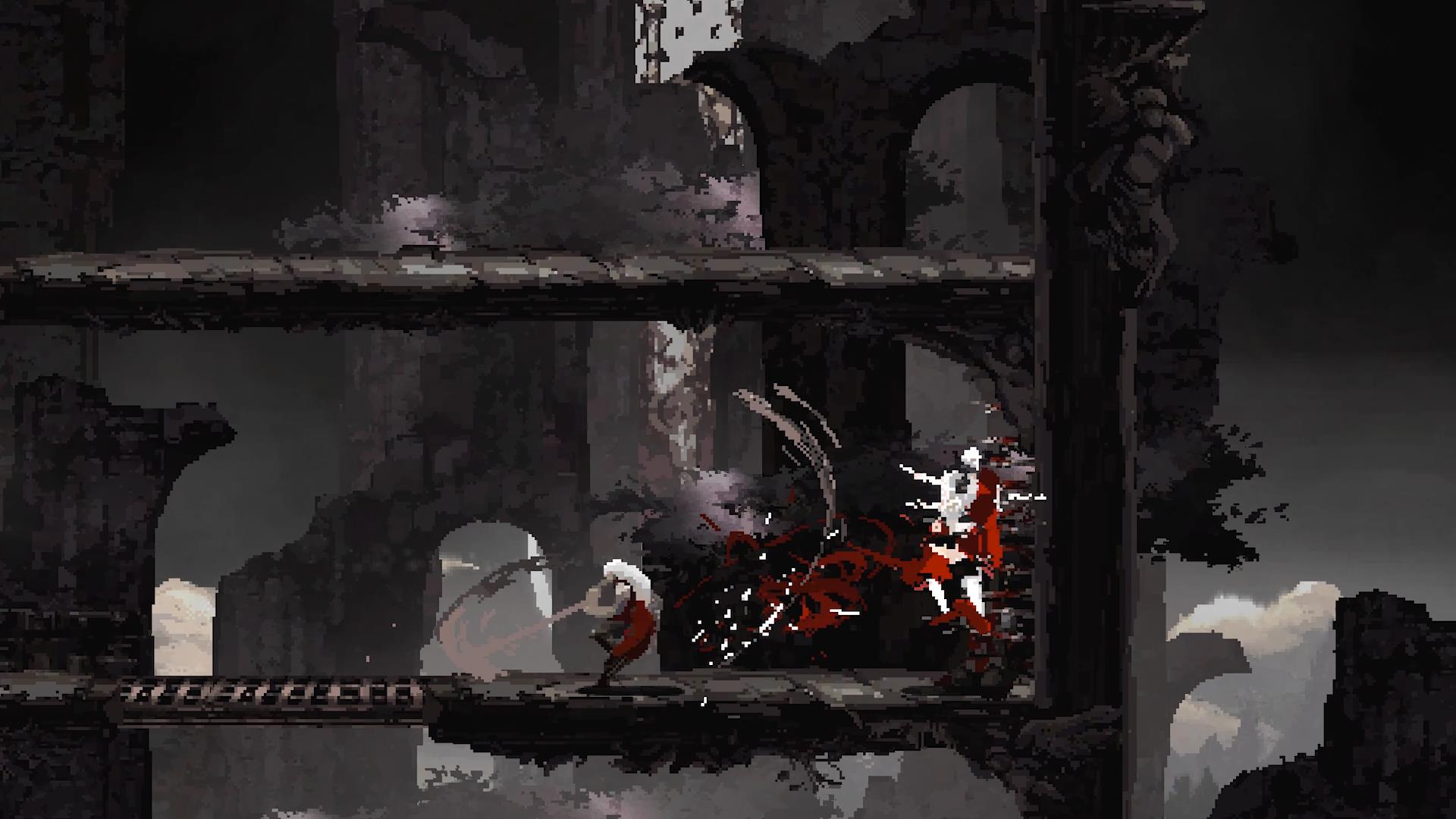 Glands are also found through out the game, and rarely are dropped by enemies. You can use these glands to purchase attachable boons from different characters from the game, or use them to make enemies drop more bone powder, or even glands. Use these glands wisely though, because each time you die, the moon becomes "hungry". All enemies are now more powerful, offensively and defensively, and the only way to quell this, is to offer a gland in a ritual to the moon priestess. The upside to this, is that every kill nets you more in game currency, but at the cost of pretty much everything else, and with the added kills by an "red" version of an enemy. Once the moon priestess is pleased, then it's back to normal, instead of dying in two hits. And yes, I also can't believe I typed all that in a video game review. It's...a lot.

The aforementioned dark mirrors are scattered throughout the game. They are usually next to a character who will move the story like along, positioned right before you enter the mirro. Within these mirrors is the Mould Workshop. The workshop is where the characters you meet in game eventually end up. You can buy different attributes from them, such as a double dash, or a critical chance increase. They also sometimes tell you what to do next.

While adventuring, you'll come across "memories" of what Irma did before she became a clayborne, and you can sell these memories to the characters in the workshop for bone powder. The dark mirrors also give you access to your witchery tree, moon ritual, special weapon switch, and you can warp to any dark mirror you have reconstructed. Anytime you reconstruct a dark mirror, not only do you lose all your boons, but a doppleganger of you is created, and it wants the same thing as you do. And it will kill you to get it. When this happens, you lose your special weapon, and its defeat is the only way to get it back. The best part is that the game saves automatically, and only, here. When you perish (not if, when), you reappear at the last mirror you came in contact with. Find them all, and trust me, you need these. 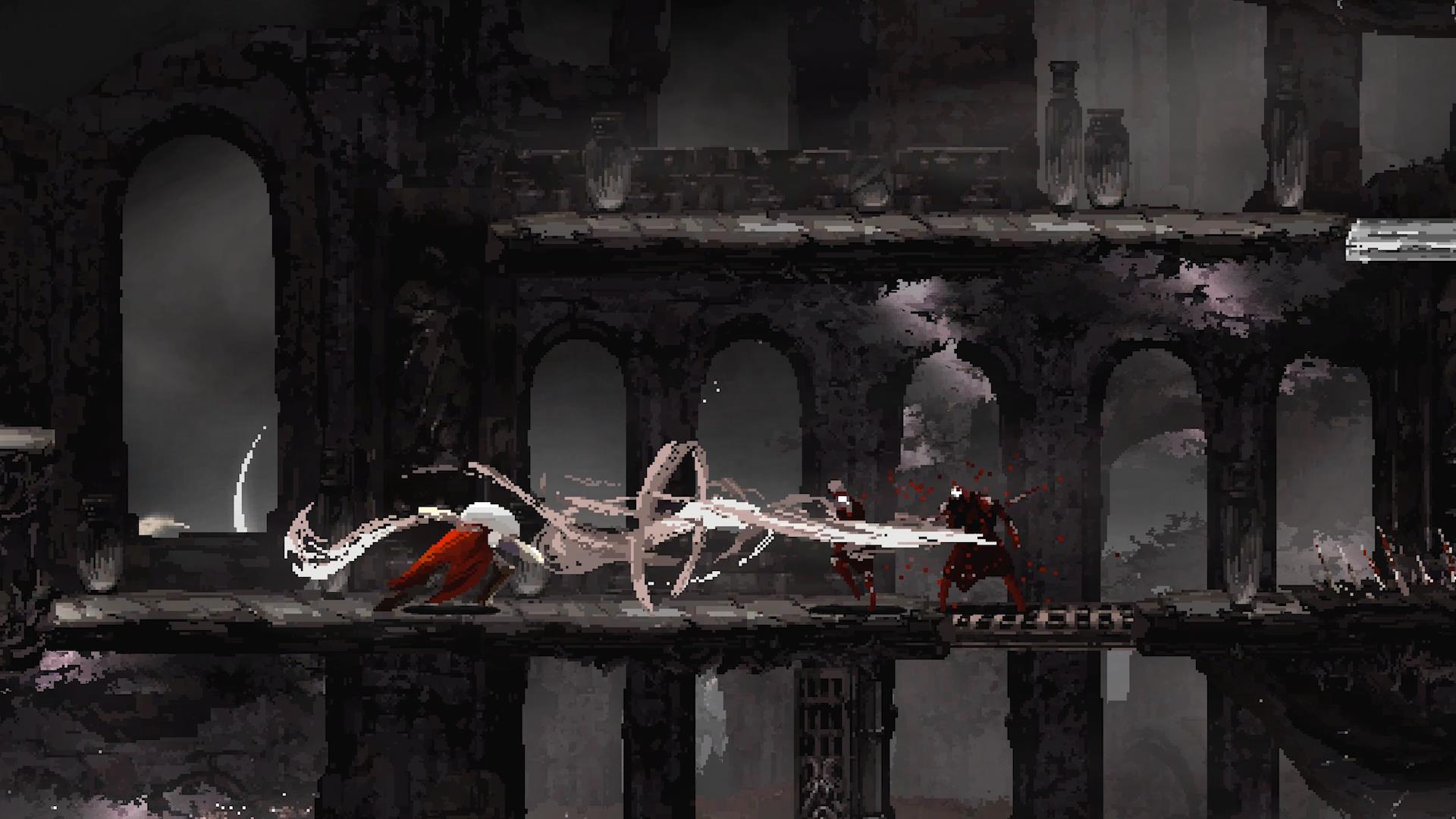 The pause menu is where you'll find all your purchased and attachable attributes, your unlocked witchery spells, your current info including what bonuses you have, and the map. You can have three attributes at a time. Some of them you cannot stack, because the game wants you to die and learn. Some of them are disposable, and you lose them when (not if) you die. You can attach two witchery spells, one for each trigger, and though they also take a little to start up, it is absolutely necessary that you have two powerful ones. The map is crucial to this game, though it reminds me of someone drawing a Metroid 1 map on graph paper. You can zoom, but to little avail. You can mark up to 5 points on the map, but I never used this feature. It also doesn't necessarily tell you where to go, which is where the fourth tab comes in. Your key items usually contain a key with a descriptor like "This is a key to the far west side in Earth bowels". So if you get lost in the riddles, check your key items. Thank me later for this, as it happens a lot.

Some people are going to compare this game to a Soulsbourne type. For those of you not in the know, a Soulsborne games are long, very difficult, and you die a lot. I don't know if it's a fair distinction, as Moonscars can be tough, and you do die a lot, but not unfairly, nor do you necessarily die after chipping away at one of the few bosses in the game because you got hit by a straight up attack. My defeats came because I didn't refill my life nn time, or I hit the wrong witchery. I may have missed a perfect parry. 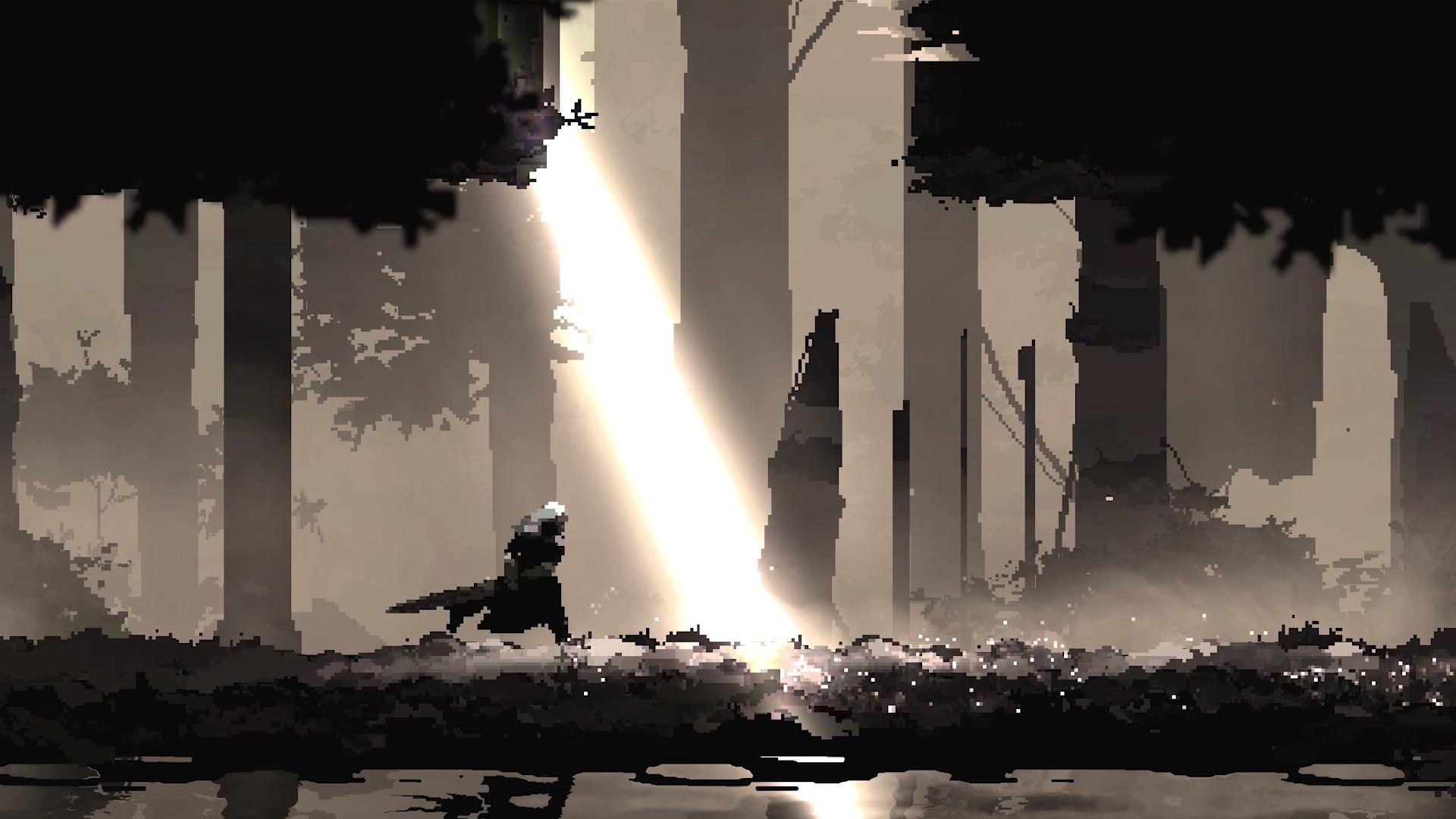 With the right attributes, and boons, the game's biggest challenge is trudging through the map. You will go through an area and make it to a locked door. You can then drop down, or go above, and go around, and unlock the door from the other side. Or, once you make enough progress, doors that weren't open before just open, and there's a platform that wasn't there before. You will quadruple back through the map often, and with that comes repetition. You will fight the same monsters a lot. And some of them are cheap. Some of them have armor. For me, it was slash, slash, slash, dodge, slash, special, witchery, dodge, and slash, over and over. There will be a sequence, even with all Irma's moves at your arsenal. The hungry blood moon thing is pretty unforgiving, too. All the enemies, including the bosses, get offensive and defensive buffs. And if you don't have glands, death comes early.

The story that tries to move you along does very little. The characters here all seem like they despise you, and I didn't care for them, because I don't think I was supposed to. Irma is the only character in the game I have any feeling for at all, and between her, the cat, the voiceless "First One", and all of her dopplegangers (who also have an aimless anger about them), the story gets very convoluted. It doesn't help that I have to go back into an area twice, only for a character to ask Irma "Don't you get it now?" Seriously, everyone seems to talk in riddles to Irma, and at one point, she even utters "I'm more confused now."  Me too, Irma. Me too.

If you've played any other Metroidvania game, you can easily pass this one up. It means well, and Grey Irma is a beast, but with a convoluted story and characters you will never care about, dying over and over is probably the best part of the game. Beautiful game. Questionable story. "Every death makes you stronger." goes the tagline. I question where the strength actually goes. Slash, slash, dodge.