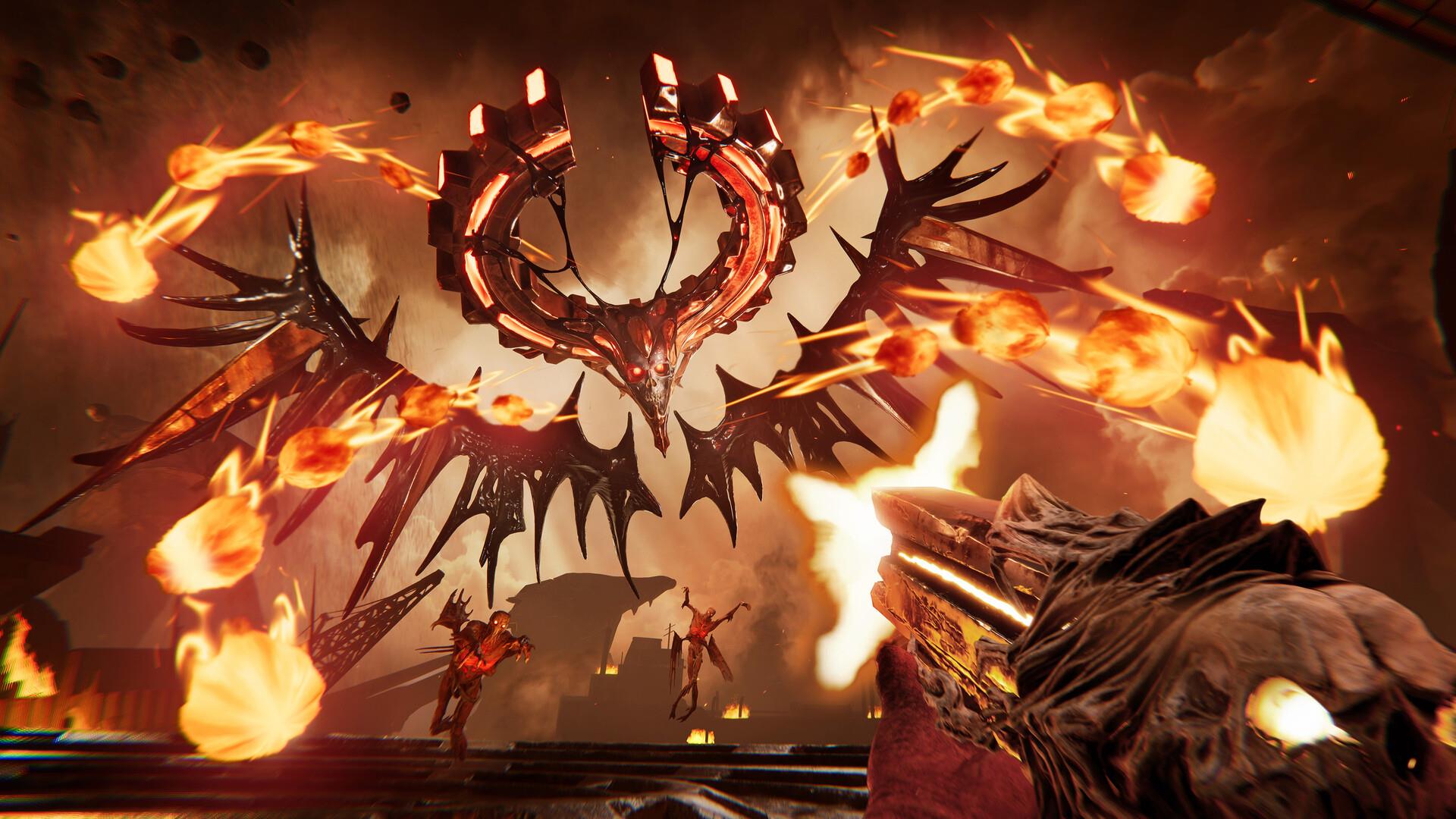 Without a doubt, Doom is one of the most – if not the most – influential first person shooters of all time, as a multitude of games have tried to follow in its footsteps. Hear me out: take what you love about music games such as Guitar Hero or Rock Band and combine it with the visceral demon killing of Doom. The result is the monstrosity Metal Hellsinger, the newest rhythm-based shooter from Stockholm developers The Outsiders. This game is a no-brainer if you’re into heavy metal music and fast paced shooting, but may come off as daunting for those new to the genre due to repetitive gameplay and a difficult learning curve.

You play as a humanoid entity known as The Unknown, who has been banished to the depths of Hell and must fight her way out to reclaim her voice, which she lost along the way. The game is narrated by industry veteran Troy Baker, who plays a magical skull named Paz. Paz acts as both a weapon, albeit a weak one, and a companion, being the only one with a voice to tell The Unknown’s story. You make your way through eight levels of Hell, facing different aspects of a greater being called The Red Judge. It’s a minimalistic plot that tells a competent story, but it’s clear that the narrative takes a backseat compared to the actual gameplay. 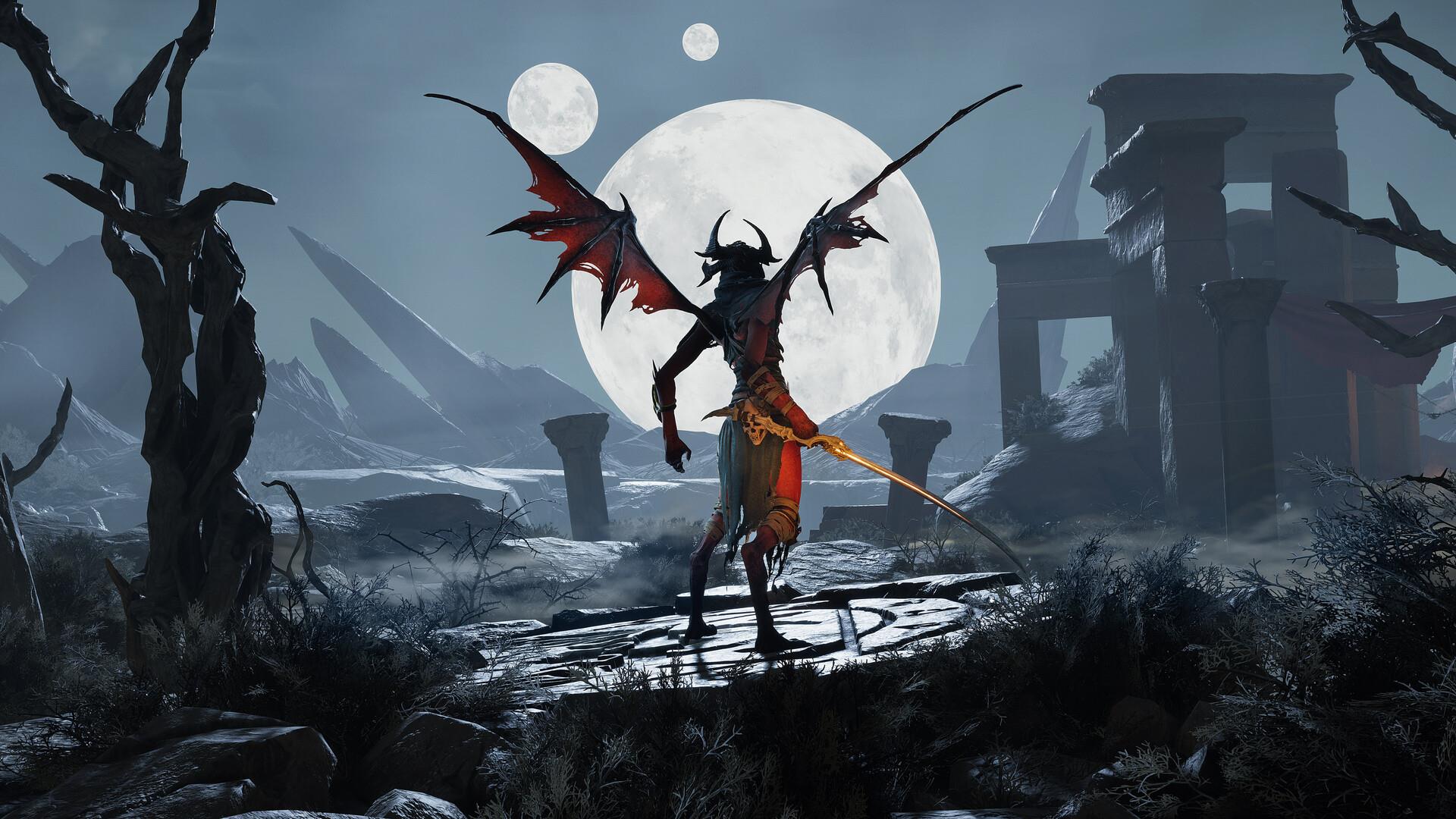 Music and shooting are the main driving elements of Metal Hellsinger, given it’s a rhythm based shooter. Your in-game reticle acts as a metronome and everything you do, from shooting and reloading to dodging and dashing, must match the beat of the song. The more in sync you are with the tune of the music, the higher your fury multiplier is. The higher your multiplier is, the more damage you do and the more points you earn. Reach the highest multiplier level, which is x16, and you unlock the vocals on the track. Drop below that threshold and the vocals will disappear. This is an excellent and immersive approach to motivating the player to learn the systems and play better. Obviously this is a far better treat for those who are into this genre of music, but even someone who isn’t  wouldn’t be able to deny how pumped up the songs make you feel. Not to mention the developers got some insane heavy metal bands to collaborate on the soundtrack of the game, including singers from System of a Down, Arch Enemy, and Dark Tranquility.

Every stage features a different area of Hell, but unfortunately most environments look like a reskin or recoloring of one another. Most if not all levels are extremely linear with no exploration to be done, but just waves and groups of enemies to dispatch. Health crystals and multiplier coins scatter the environments for you to pick up, much as in a typical Doom title. A different version of The Red Judge serves as the boss at the end of every stage, but fights end up being the same, with slight variations. It’s a huge disappointment that the developers didn’t create more bosses to fight as they are usually the most exciting aspect for a game of this nature. There is, however, a healthy demon variety, ranging from shield wielding brutes to acid spitting flies. It also got kind of annoying that The Red Judge frequently became untargetable and spawned in mob monsters just to prolong the fight. Each level ends with an arcade-esque results screen breaking down your overall score, with a global leaderboard to compete in as well. 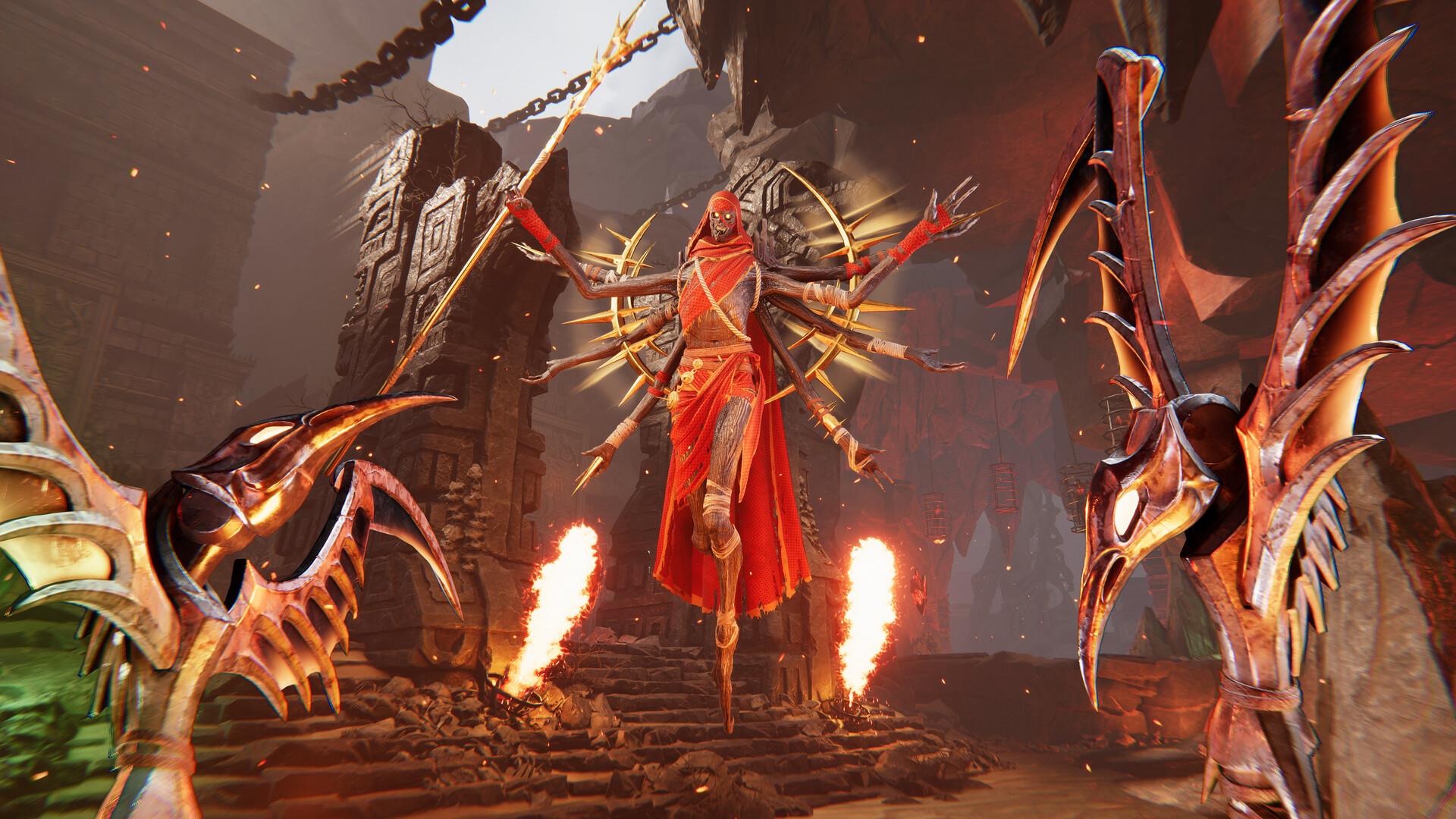 There are six different weapons to choose from, each obtained as you progress the main levels, and operating with its own rhythm. You start off with a default sword named Terminus and your trusty skull companion Paz, who acts as a weak pistol and can shoot fireballs at decent range. You eventually obtain a shotgun named Persephone, dual pistols called The Hounds, an explosive crossbow named Vulcan, and a pair of hand scythes called Hellcrow. Terminus and Paz are always equipped but you can only take two of the remaining weapons as part of your loadout per stage. The tempo and rhythm of the eight clip shotgun will differ vastly from the two arrow crossbow, so you must experiment and learn to adapt to each weapon's tempo and beat. Every weapon also offers a perfect reload that can be performed if you press the reload button on beat in addition to a special ultimate move that builds up as you use it. Staggered enemies start flashing orange, much like modern day Doom titles, and allow you to perform an execution that rewards you with some health back. Even performing this action requires you to press a button on the beat; otherwise the enemy will become unstaggered and come back to life.

Metal Hellsinger is a hard game, even on the easiest difficulty, especially for someone who might not have had experience playing rhythm games before. No shame, but I played on Lamb difficulty (the easiest of three total difficulty levels), and found myself dying and needing to retry multiple times! Outside of progressing the main story, you can also partake in torment challenges, which reward you with sigils to equip in your loadout that provide special bonuses. These challenges are just as hard, if not harder than the main game as they require you to perform certain tasks within a time frame, such as only killing enemies with your weapon’s ultimate in 35 seconds. I recommend attempting all of the torment stages first to get the sigils before going onto the next main stage, especially if you are playing on a harder difficulty. 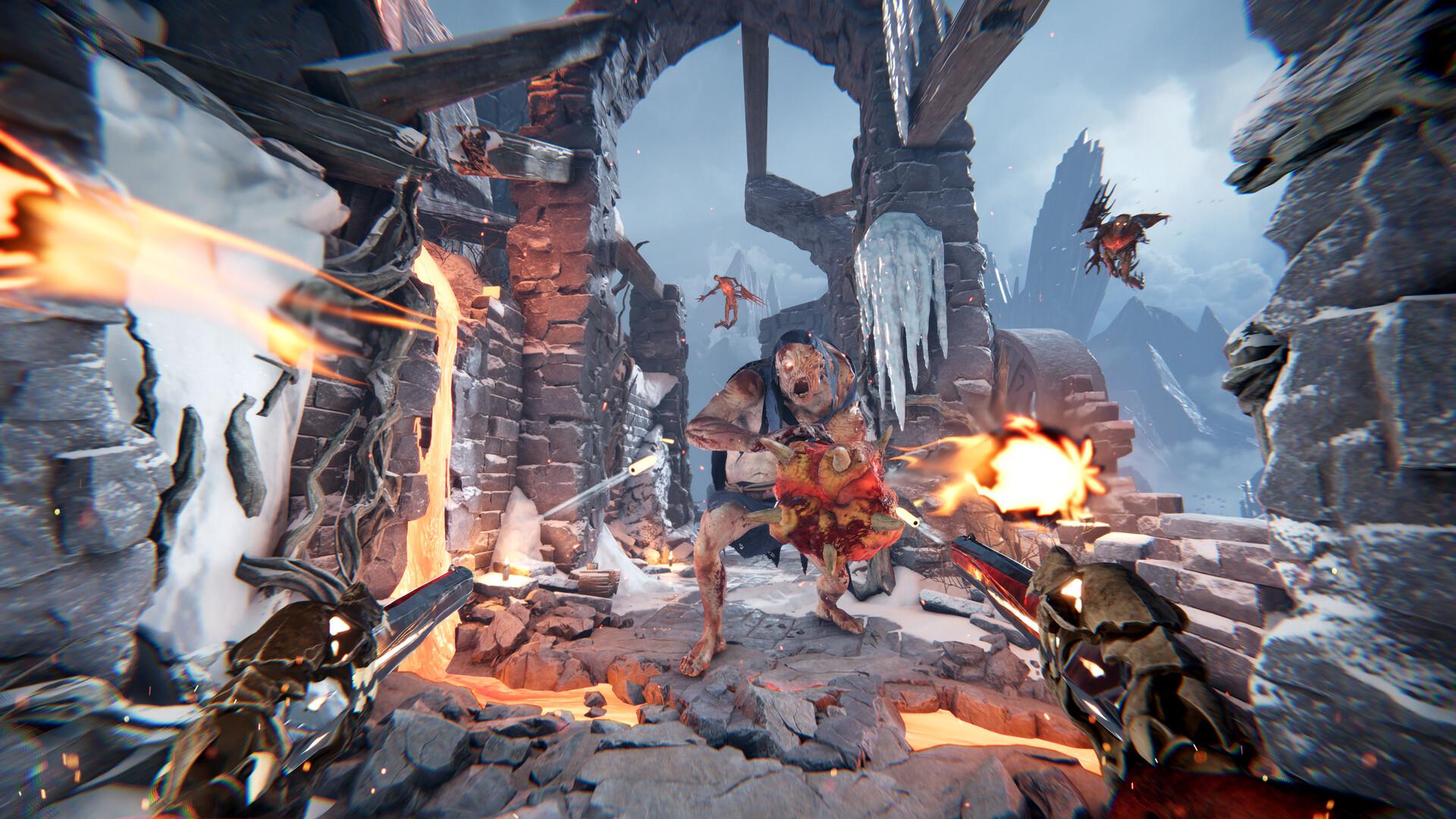 There’s great production and replay value here, especially if you take into consideration the crisp and animated graphics for a non AAA game, from weapon and enemy design to the environmental details and layouts. Metal Hellsinger is a title that begs to be replayed, whether that is to achieve a better score and climb the leaderboards, attempt a harder difficulty, or just rock out to the banger soundtrack while shooting some demon baddies. It’s a game that I undoubtedly struggled with, but feel motivated and inspired to practice and get better. Unfortunately, there is a bit of concern for variety, including stages, bosses, weapon types, and just overall content. Here’s to hoping the developers have more planned in the future.

The Outsiders did a fantastic job blending together heavy metal music with fast paced shooting. It’s not everyday you see a game that seamlessly combines the likes of Doom with gameplay elements of Rock Band. We need more games like Metal Hellsinger in the gaming industry, as it takes its gameplay inspirations and creates something new and unique.

Metal Hellsinger is a refreshing take on traditional demon killing, Doom shooting, and rhythm based heavy death metal music. It features some truly immersive and satisfying gameplay mechanics, especially when you click with the beat and blow off demon heads while rocking out to the beat of System of a Down. However, the game’s difficult learning curve and lack of variety may be off putting to some.