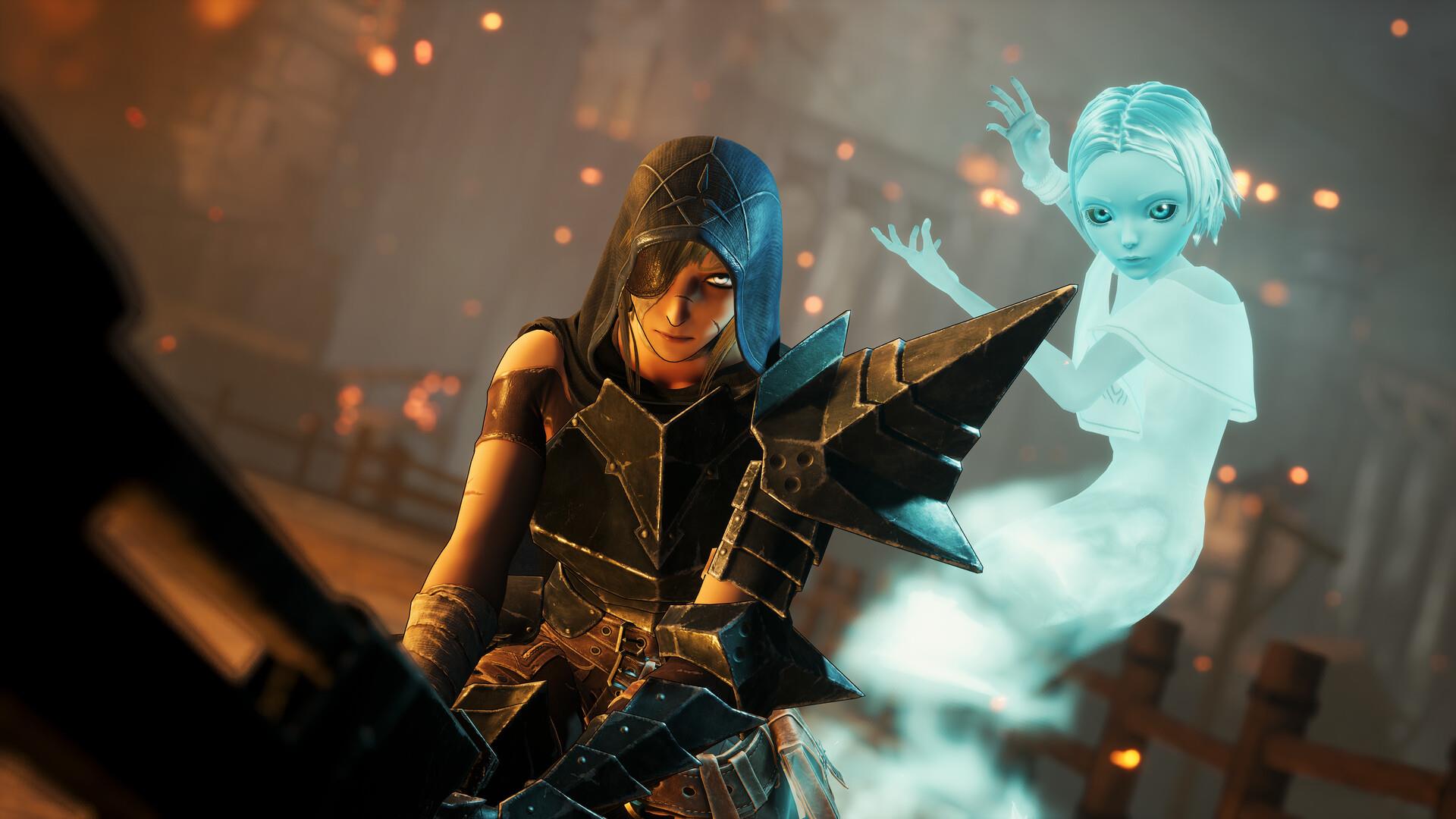 Don’t be fooled by the name alone; Reply Game Studio’s newest project Soulstice is not a Souls-like game, but instead one that draws heavy inspiration from the likes of old school God of War and the Devil May Cry series. Soulstice is a hack and slash, coming-of-age dark fantasy action role playing game where you play as Briar and Lute, sisters who have been soul-bound into a creature known as a Chimera. The development team manages to create a great dynamic between an in-depth combat system and an engaging narrative, but ultimately bogs the game down with dragged out levels and repetitive gameplay.

Chimeras are entities consisting of two souls: one that inhabits a physical body, and one that is bound to the other via the form of a shade. These soldiers are sent by the Order of the Ashen Blade to investigate an anomaly that has transcended and left a huge tear in the sky. Not much about the world and backstory is established directly, as much of the narrative is left as a mystery. The story slowly unfolds as you progress through each chapter of the game, with lore dumps consisting of dialogue heavy cutscenes and flashback memories. You meet many characters along the way, each with their own agendas and motivations. The relationship between the two sisters is also naturally developed. Briar acts as the more stubborn and headstrong one while Lute acts as the more worrisome and supportive one. 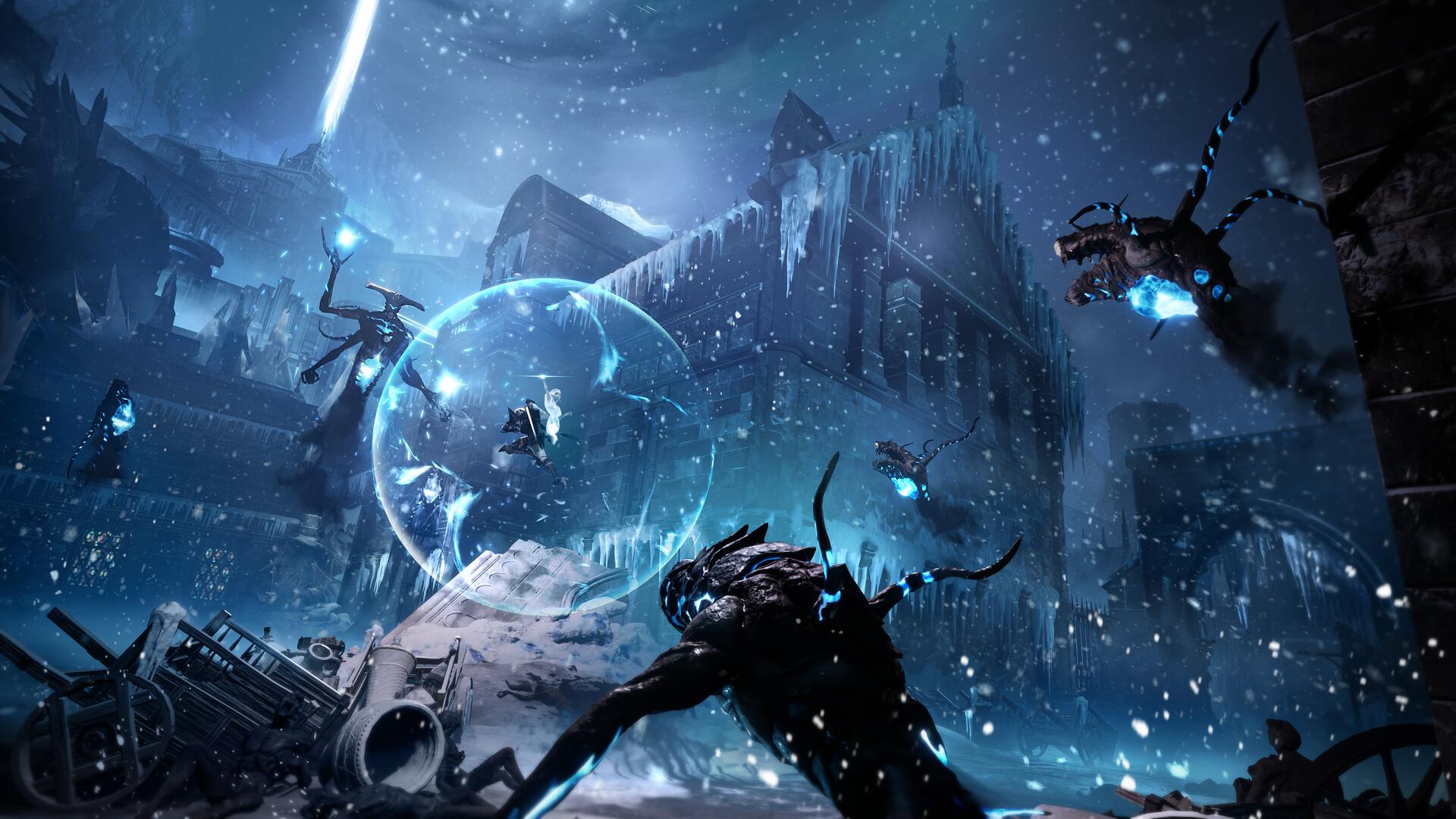 Most games of this nature treat the story as an afterthought but the developers here do a decent job of cohesively weaving together a tale of twists and turns. The only complaint, if any, is that the game is unnecessarily prolonged. Soulstice has you treading multiple versions of the same environment, facing the same enemies over and over again before the next piece of the story is unveiled. Much of the important narrative pieces are also kept a secret on purpose, with characters such as The Observer being blatantly vague repeatedly before revealing more information. This wouldn’t be too much of an issue if there were more environmental and enemy variety, but the game suffers immensely from reusing assets.

Where Soulstice shines the most is the combat and exploration. Soulstice pays homage to its old school inspirations with its unique take on angles. Outside of combat, the camera point of view almost becomes a static two dimensional side scrolling affair, but becomes a dynamic free flowing three dimensional one when engaging in battle. It took a while to get used to, but this design choice brilliantly feeds into level layouts, including hidden item placements and puzzle locations. The camera can make you feel a bit claustrophobic during combat though and work against you, so just keep that in mind. 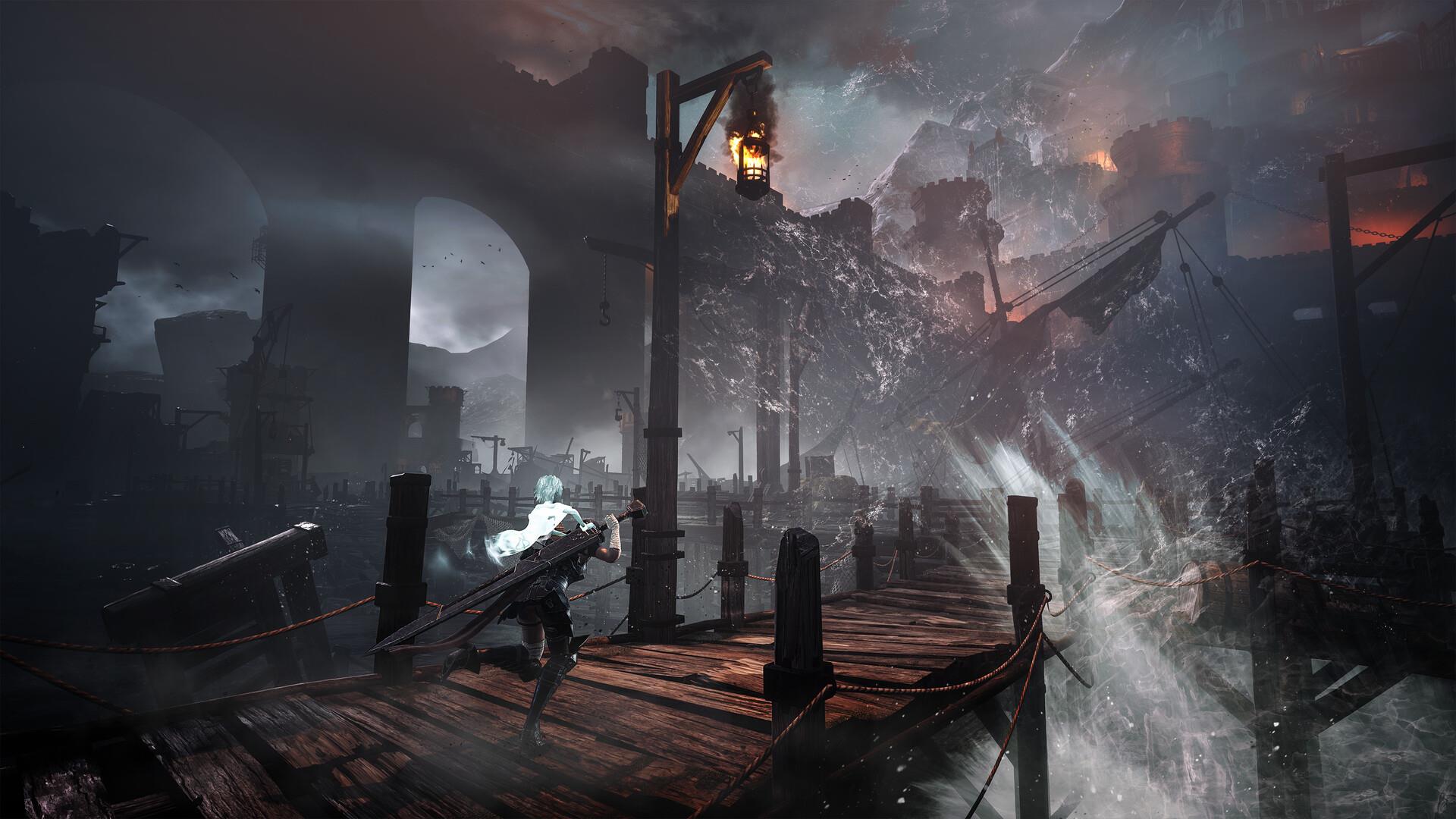 As mentioned earlier, you take control of both Briar and Lute, simultaneously. Briar can attack with her gigantic Berserk-inspired sword alongside an arsenal of secondary weapons, including a bow and a fist. Different weapon combos and skills can be unlocked in a vast skill tree as you gain a particular currency. Lute, on the other hand, acts as a utility character, occasionally shooting enemies with beams of light, but mainly taking the role of your shield. She must react to different enemy types by activating various energy fields in order to allow Briar to gain the upper hand. Perform well in battle and your unity level increases, which when maxed allows you to perform a powerful synergy attack. You eventually unlock a berserk state that results as the Chimera attempting to transcend, or become lost to the darkness. You must play as Lute if this occurs to try and save Briar from becoming insane. This dual dynamic is excellently interwoven into the combat and ultimately makes fighting an engaging affair that requires deep knowledge of each system in order to succeed.

Boss fights are even more of a spectacular sight, as each requires a fundamental understanding of every single combat mechanic in order to succeed. This includes, but is not limited to: switching between Lute’s energy fields or utilizing Briar’s various weapons to hit different weak points. Button mashing won’t get you far, even in the easiest difficulty, so it’s recommended that you learn these various fundamentals from the get go. Combo inputs are equally important to memorize as they are satisfying to pull off! Unfortunately, bosses come at a premium, as you won’t be seeing one at the end of every chapter considering how dragged out Soulstice is. The first boss encounter happens at the very end of chapter three with the second one not occurring until several other chapters later. The game does, however, change up the rhythm of things by inserting puzzles, chase sequences, and challenges throughout. For the most part, expect to traverse through copy pasted environments, fight a group of spawned enemies, and repeat. 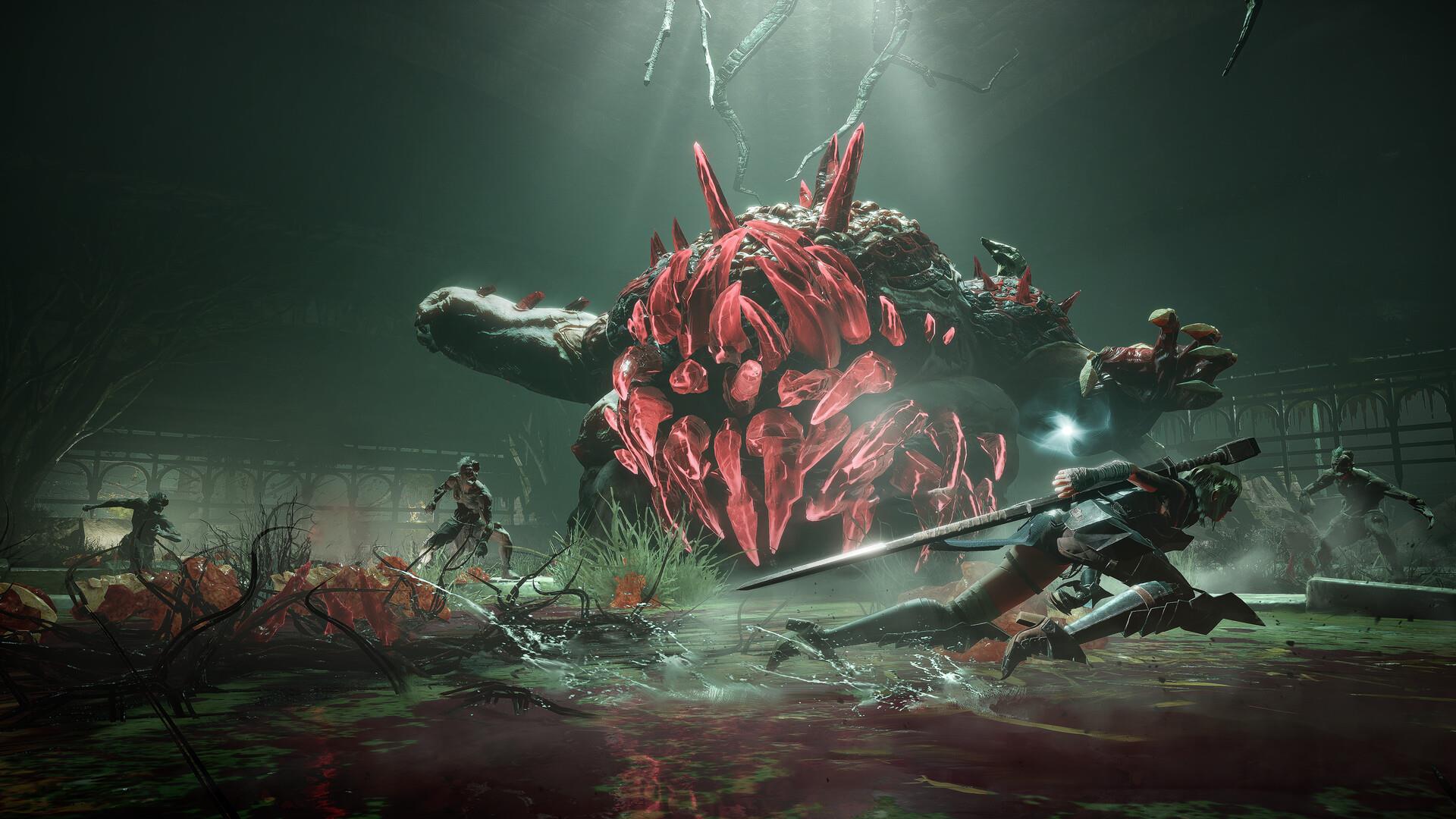 Environmental puzzles often require Lute to activate her energy fields in order to progress; she might need to use her blue field to materialize platforms or red field to destroy crystal nodes. There’s a bit of platforming involved, but nothing ever too hard. The one element that ultimately broke immersion during exploration was the inability to jump over a fence, railing, or edge. Briar can double jump, and oftentimes the game blocks her off with an invisible wall even if it’s something as simple as jumping off a ledge instead of taking the stairs down. The game also lacks variety in the puzzle department, as the same ones are used over and over again and get repetitive and tedious. You are rewarded for going off the beaten path with the occasional health upgrade or consumable, but nothing too out of the ordinary. Neither Briar nor Lute can be customized and weapons are automatically gained upon progressing through the story. It would’ve been nice if we could equip different armor or equip different attachments to weapons. Exploring may also lead you to a challenge orb, which presents a different requirement each time, such as performing a certain number of perfect parries or only defeating enemies within a circle. These challenges can get quite tough but completing them rewards you handsomely.

Every combat encounter ends with a score, consisting of a breakdown of ratings between combat, time, and damage taken. Master those flashy momentous combos and execute your enemies with finesse if you want to get the best rating. Five difficulties are offered: Human, Initiate, Knight, Chimera and Transcended, with the last two being locked until the previous one is completed. There’s quite a lot of replayability here, especially for those looking to get a Diamond rating for each chapter or completing the game on the highest difficulty. But again, considering how unnecessarily long the game is, I don’t see myself revisiting the game a second time. 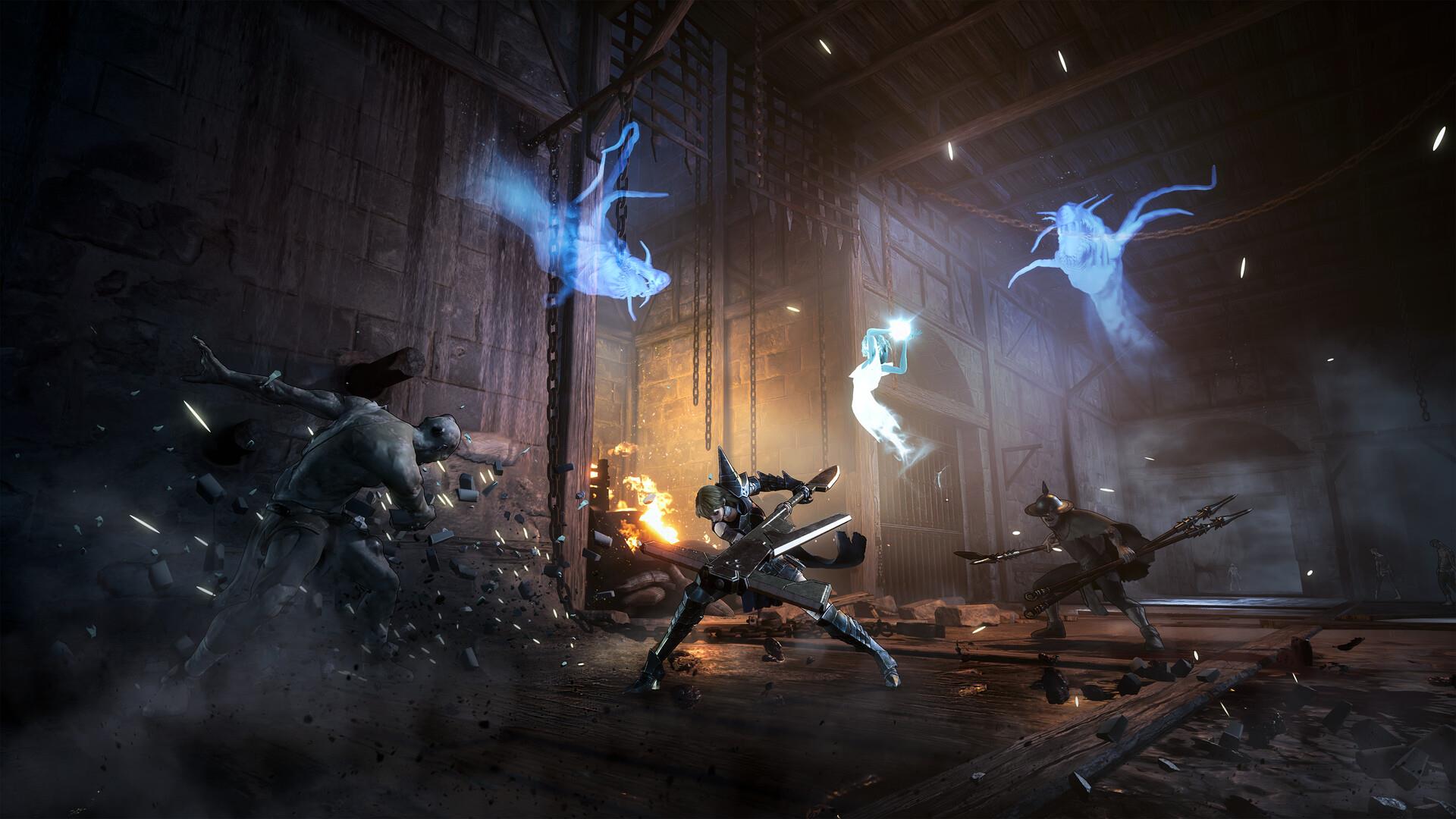 There’s nothing inherently wrong with Soulstice, as I ran into no bugs or performance issues during my time with it on the PlayStation 5. It’s a gorgeous game, featuring crisp graphics along with a competent voice cast and bopping soundtrack. Fast paced electronic beats accompany you as you string together flashy combos against your enemies. It’s evident that this game has a well fleshed out combat system, and tons of content, but something about it just didn’t click with me. Nonetheless, I think fans of the genre will still have a blast with it.

Soulstice is a solid, albeit unnecessarily dragged out, hack-and-slash action role playing game that features a great cast of characters and an engaging narrative. There’s a ton of replayability and a high skill ceiling to achieve, but the lack of variety in gameplay elements and wonky camera angles keep it from being truly amazing.