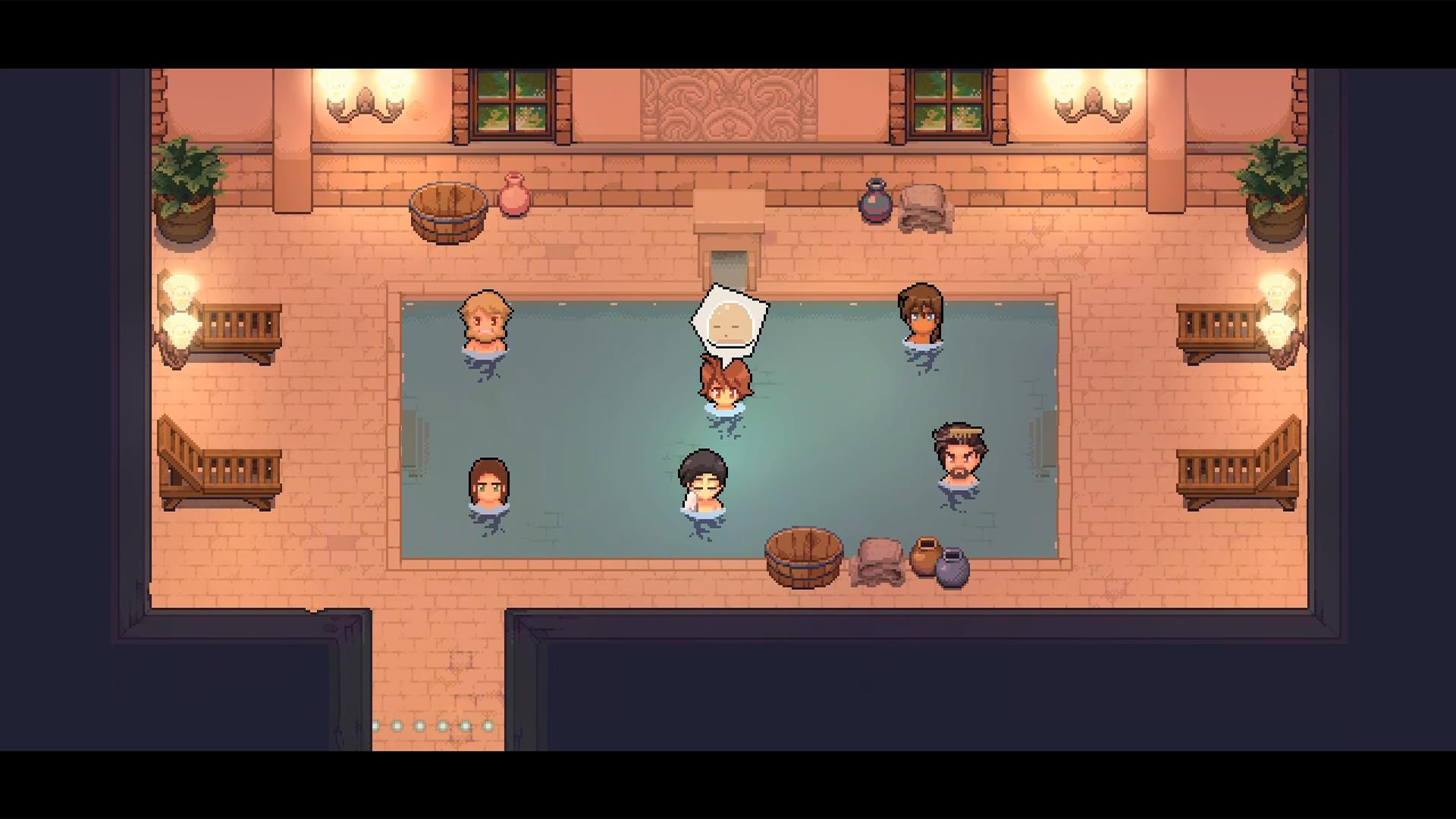 Written by Elliot Hilderbrand on 9/22/2022 for SWI
More On: Potion Permit

Life sims are making a comeback. Maybe they never left, but they sure keep coming. I have no evidence, but I feel as though they are taking over on the Switch. At the time of this review, Nintendo recently held a Direct where they showed off five upcoming life sim-style games. I want to try them all. There’s something about getting into a rhythm of farming, foraging, and homemaking that lets me put on some music or a podcast in the background and spends days, or months, in-game transforming my little world into something grand.

Potion Permit, the new life sim from developer MassHive Media, focuses on a town named Moonbury. Moonbury doesn’t care for outsiders, especially those from the capital or those with a medical background. You happen to be both. But the mayor of Moonbury, whose name oddly enough is Meyer, has a sick child, and the local witch doctor hasn’t been able to find a cure. He’s decided to contact the Medical Association; they dispatch you to help cure his daughter. It doesn’t take long for you to cure her so easily and quickly that the mayor now wants you to stick around; help mend tensions between the capital and the town, and continue to care for the townspeople. They happen to hate you, and it’s not a quick fix. 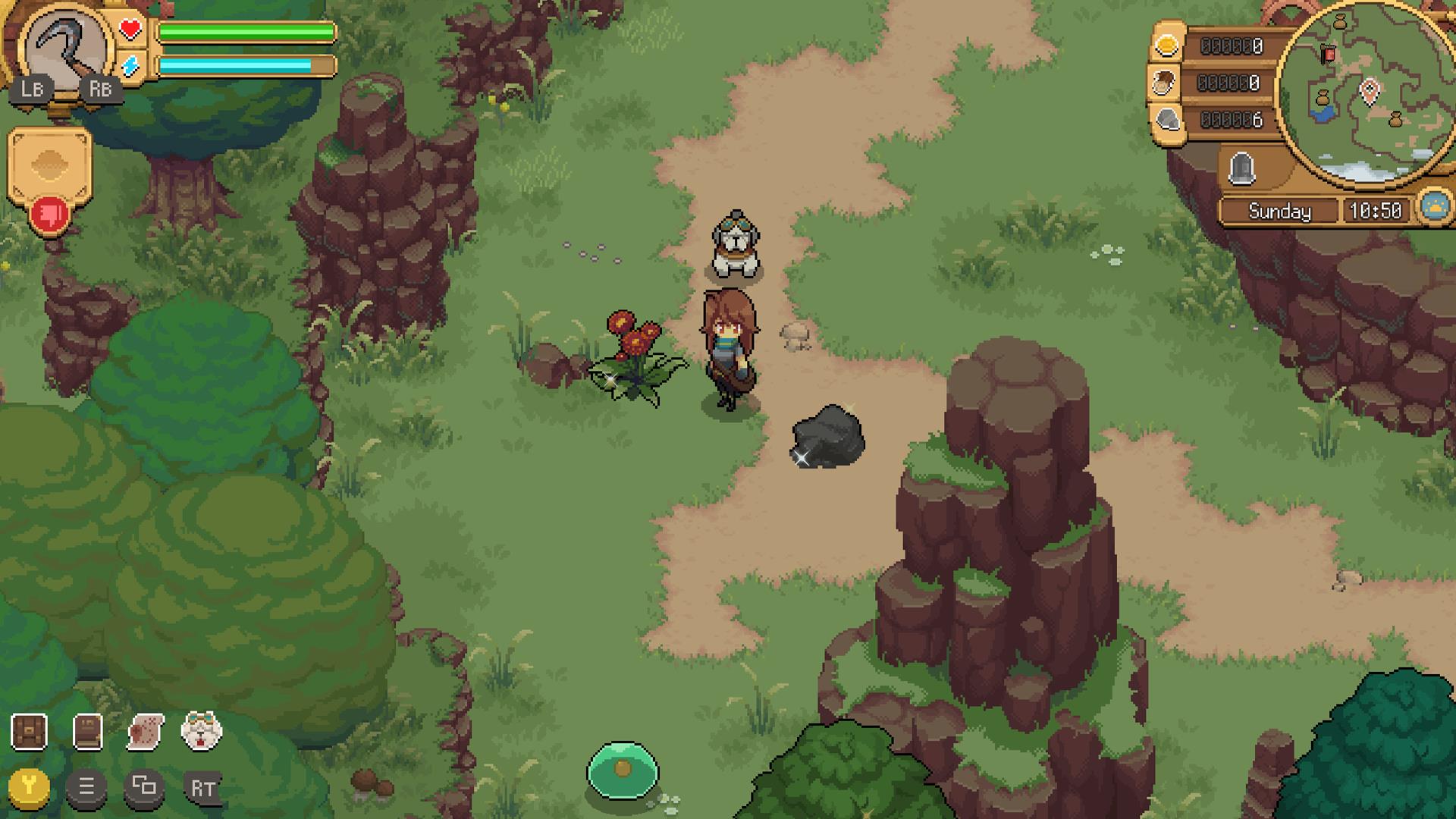 I love how Potion Permit does a great job of making you feel unwelcome in a town. At the start no one will give you the time of day; some choose to ignore you, while others are told not to talk to you. If you hurt one of them, even on accident, they all dislike you, taking longer to build the trust up. They are a fickle bunch of people. I started to think the capital was right to cut off contact with these people; they seem very set in their ways. The witch doctor, in particular, could care less that you saved the mayor's daughter, even though he had spent weeks trying to find a cure for her sickness.

There are no farms to tend to in Potion Permit, only patients. The first step in the main gameplay loop is to identify what’s ailing them. This is done through a rhythm mini-game; the better the timing, the better the eventual outcome. Once you know what is wrong, you need to search for ingredients to put into your cauldron. This is where the foraging for materials and fighting of monsters come in. You travel throughout the island looking for specific herbs or monsters to help make your positions. Forming the potion is another mini-game; this one involves the materials you just foraged. Each potion has a unique shape, like a puzzle piece. You then put the puzzle together using the allowed materials. None of the mini-games are very hard. I solved them all on the first attempt, never having a disaster on my hands. As you progress, the games become a little more complex, but that feels like it comes much later in the cycle. 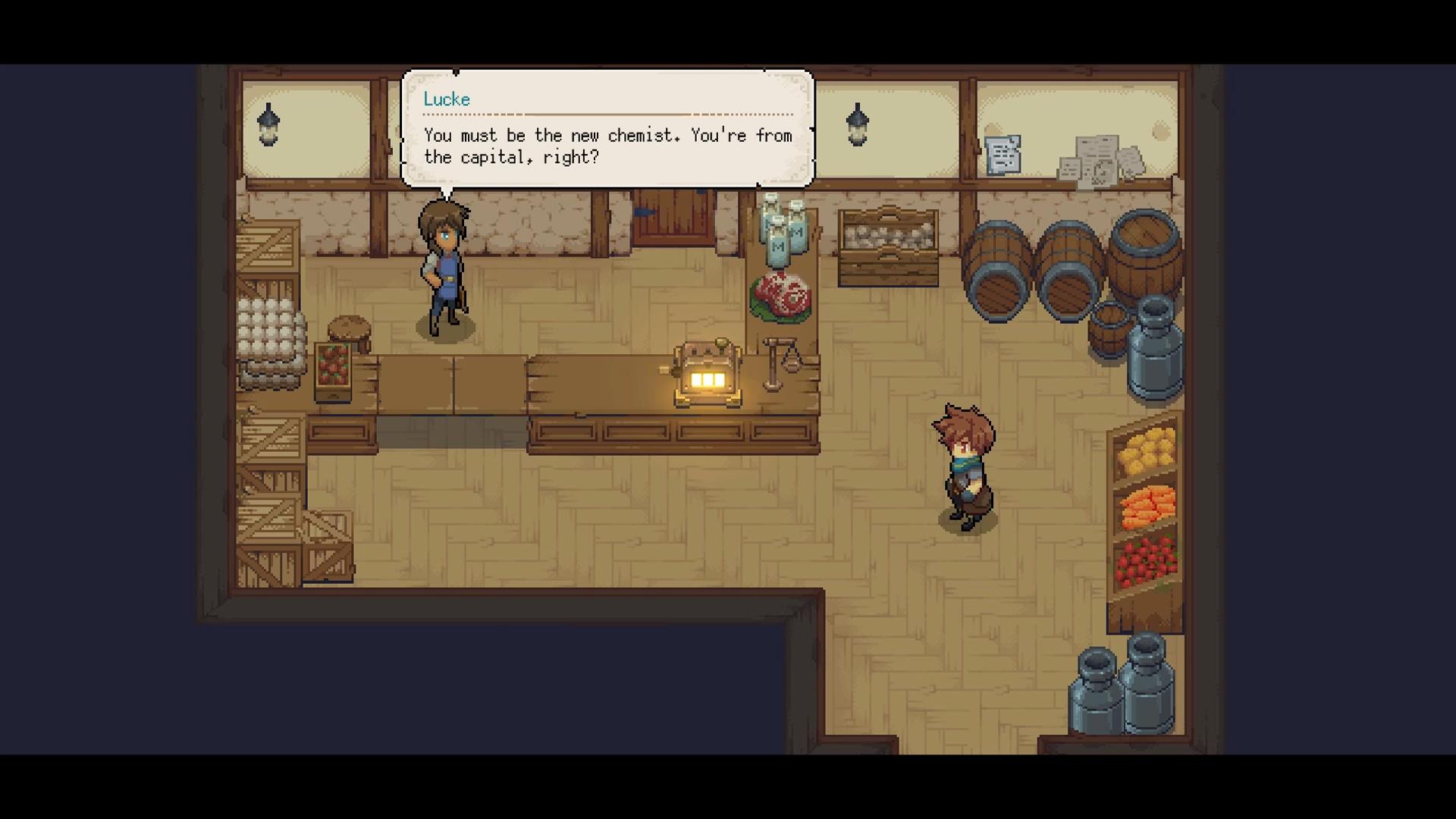 Not all of these elements are thrown at you at the start. It is a slow but welcome process. Eventually, you can start to work on other gameplay elements, transforming your house into a home, or take up hobbies, like fishing, to help kill some time. Most of my days started by taking care of any life-endangered patients or seeing any new ones that have arrived in the night. Then I would head out to talk to neighbors, pet my dog, or check on the town’s message boards for any new quests. Potion Permit allowed me breathing room to explore what interested me while keeping me tied to taking care of the townsfolk.

While farming is out in Potion Permit, there are plenty of other gameplay mechanics that you find in most life-sim style games. Combat is ok; it feels standard. There is no new take on swinging a weapon. You swing, you dodge, and you eventually slay your enemy. This is not a combat-heavy life sim. Questing feels like the main driving force of the game, but never feels like the quests take place on a grand scale;  you are mostly focused on small town affairs. You find yourself checking one of the message boards in town; it gives you a hint of where you may want to visit. You check the boards out, and bam, quest time. Most quests deal with growing the relationships you have with residents, another significant element to Potion Permit. Farming is usually my go-to chore in life sims to get into, I did not feel like I was missing out on being able to farm.

You can gift items, well item (singular), Moon Gloves. It’s the only gifting item in-game. You earn through completing tasks. Everyone loves a nice pair of moon gloves, no need for flowers, or baking, no need to make sure this person does not like a particular item. It feels a little tacked on, like the developers forgot to include gifting as a way to raise friendship levels. So, you know, Moon Gloves for everyone.

You can romance, but the options feel light compared to other life sims. It’s also not a huge focus until much later in friendship cycles. As someone who has never really gotten into finding a partner in a life sim game, I liked that it never felt like the central focus or major selling point of Potion Permit. I can see how some may feel like it was also tacked on, like gifting, but again, I never thought "I can’t wait to try and romance this NPC". You are the chemist brought to the island to care for the inhabitants; if you fall in love while there then so be it. 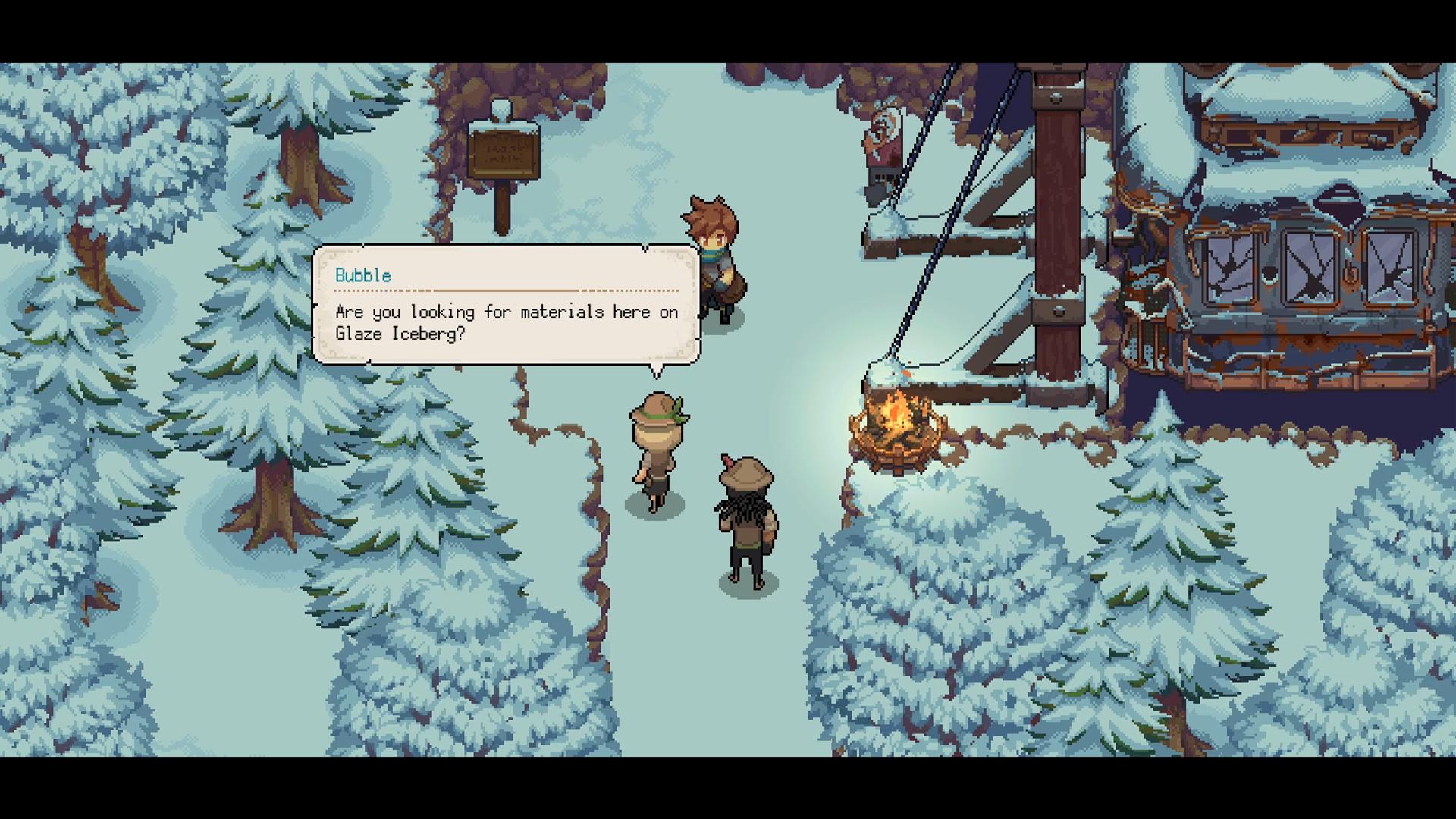 The biggest fault I had with Potion Permit was the in-game sounds. Your character does a lot of walking, and unfortunately, every step sounds the same. The noise generated from walking isn’t loud at first. It took about five minutes of being able to control my character to learn I hated the noise generated while walking. The more I walked, the louder it felt in my head. At times it was the only noise being made in-game, and it repeats constantly, until it is beyond annoying. I find that I play most of my life sim games with a pair of headphones on, listening to a podcast or music, so in the end it didn’t bother me much. 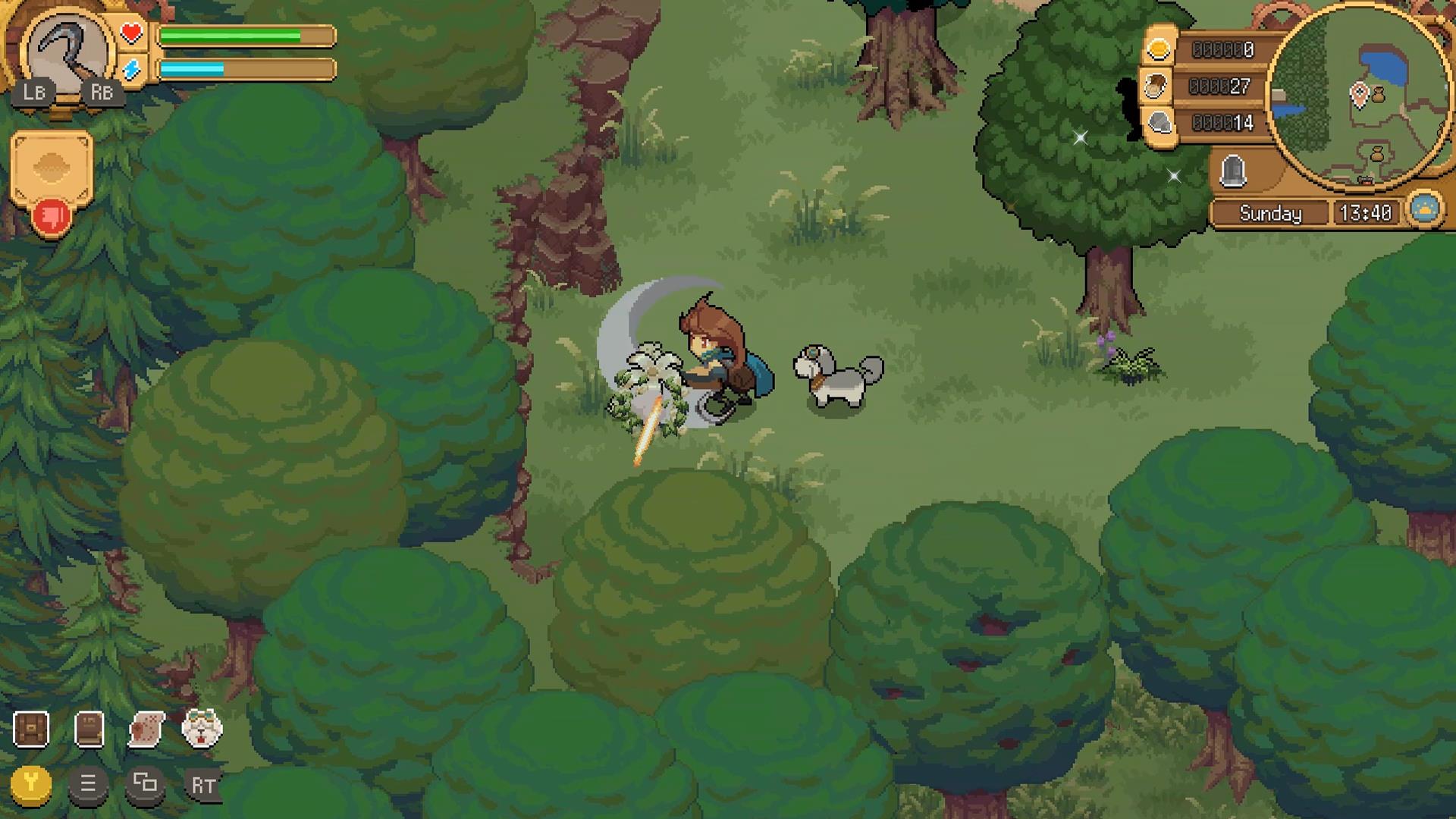 Those negative elements feel minor in the grand scheme of Potion Permit. The simple truth is I had a lot of fun while playing. Potion Permit has a lot of great elements to it. For one, the pixel art is gorgeous from the get-go. The attention to detail, especially when entering someone’s home in-game, drew my attention. All NPCs that have homes have a unique setup in their home that fits them. The fast travel option is excellent too. I love being able to move in between the places I wanted to go, and the load times were short as well so I didn’t do much waiting when I traveled.

The real issue with Potion Permit is that it feels too easy. I never struggled to get any task done. I never felt behind the eight-ball. There are minor hiccups that life sim fans may encounter. The romance options are not huge, and you gift everyone the same singular item. And farming, a typical staple of the genre is nowhere to be seen. While some may gripe about those elements, what Potion Permit choses to focus on works well. A beautiful game, filled with fun mini-games and life-sim elements. I found myself wanting to play one more in-game day every time I sat down to play. 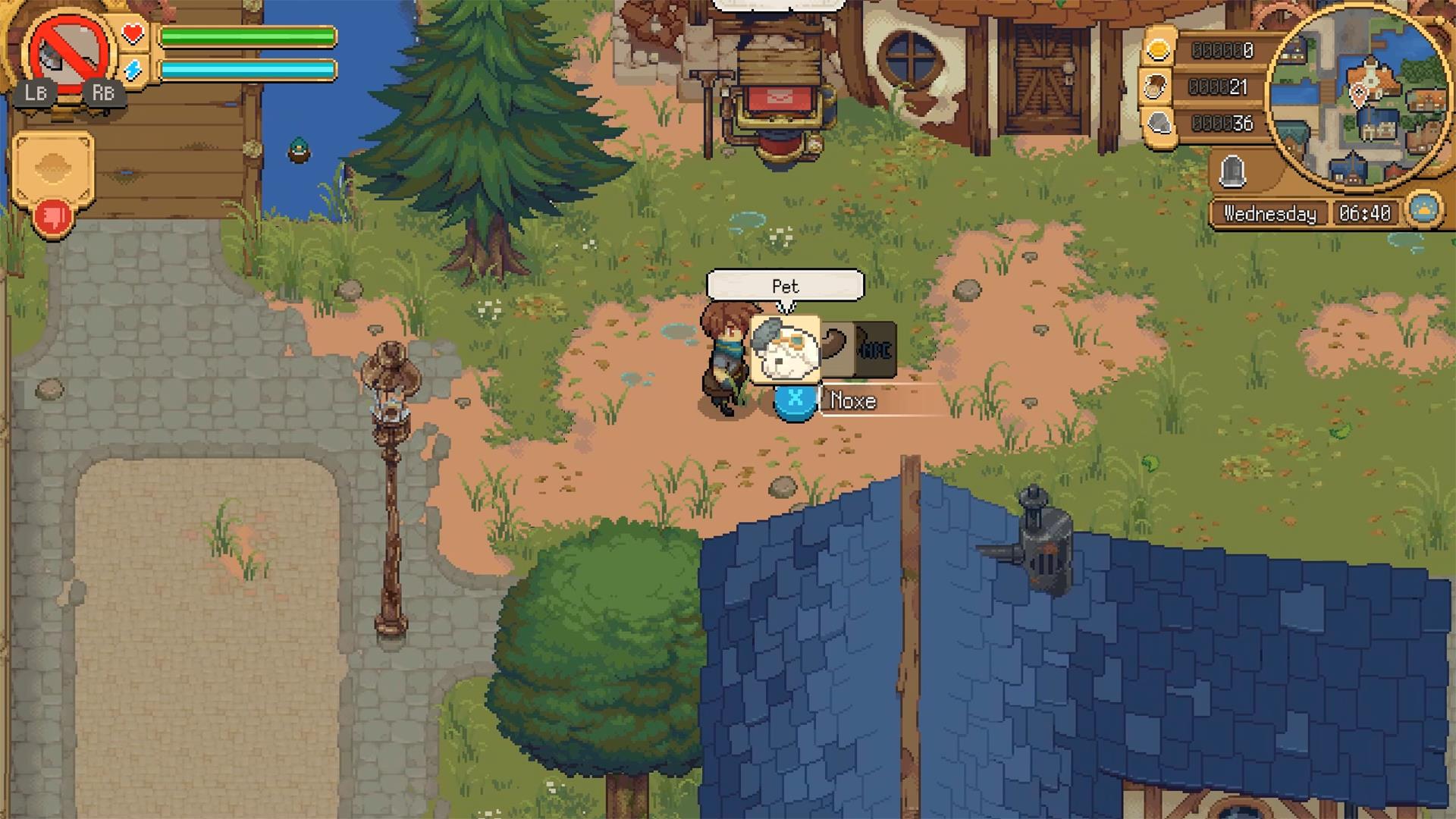 Potion Permit has you go from unwelcomed guest to belle of the ball. This doesn’t feel like other life-sim game in a couple of ways. The handful of mini-games, the romancing, and the gifting feel different, in some good - and sometimes only decent - ways. The pixel art looks great, and load times on the Switch were a breeze. I would have liked more of an overall challenge; the game never feels hard or very difficult. Potion Permit works best when throwing on some headphones and listening to a podcast.