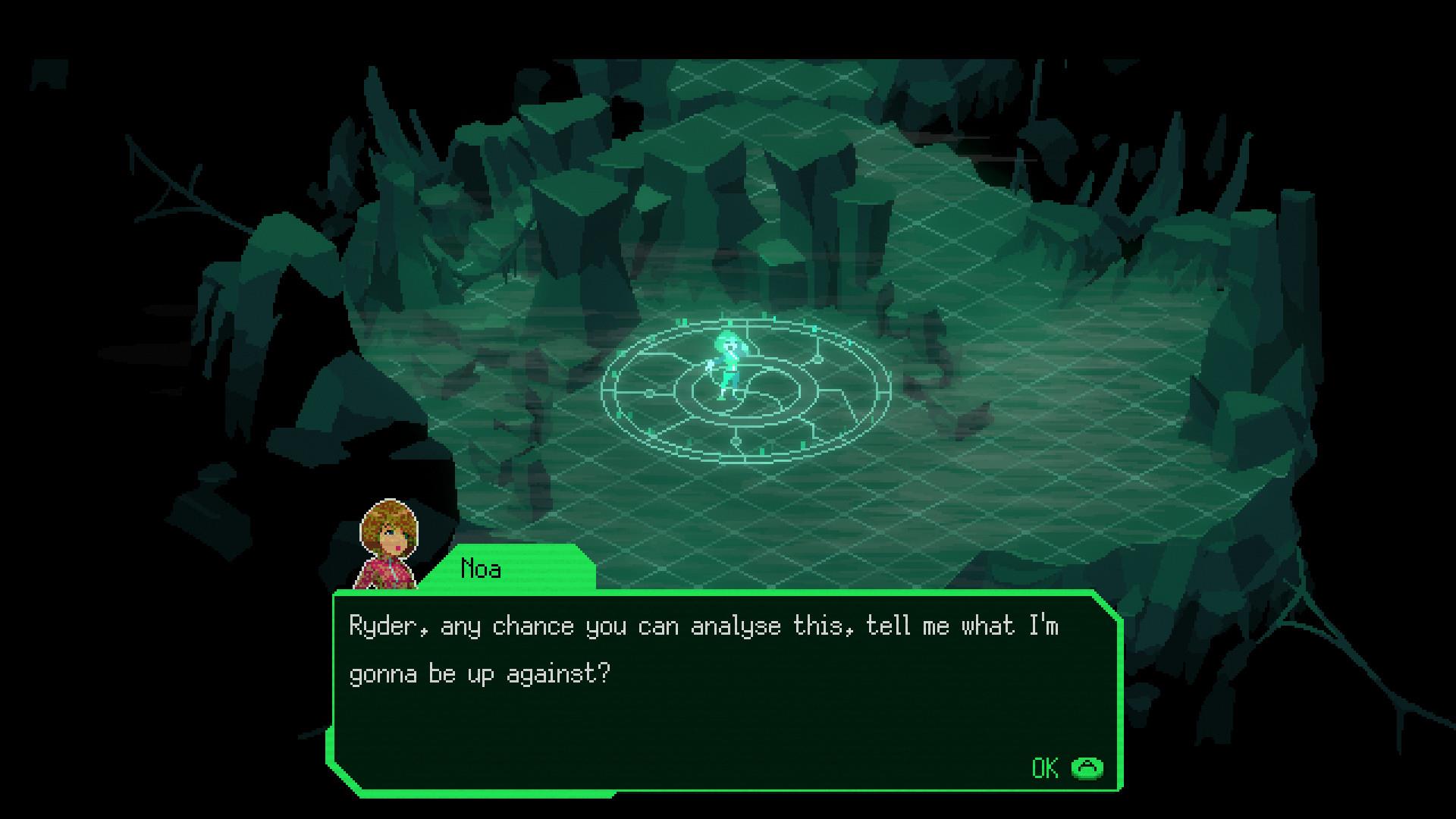 I felt a little trepidation booting up Jack Move for the first time last week. I had played and enjoyed the demo a few months back, but I wasn’t sure that I was ready to take on a 40-50 hour JRPG, no matter how much I head enjoyed the brief time I had previously spent in the game. Well, I needn’t have worried, because Jack Move offered me all of the JRPG goodness I was looking for in an eight-to-ten hour package, leaving me very satisfied with the entire experience.

Jack Move very successfully captures the look and feel of an SNES-era JRPG. While the game does offer some visuals that those 16-bit machines might have struggled to deliver, Jack Move feels like it has been lifted right out of that era of gaming. I was reminded immediately of the SNES version of Shadowrun. Fans of that game, Chrono Trigger, and Final Fantasy VI will feel right at home here, and will likely experience the same rush of nostalgia that I did.

I can’t help but feel that this was a game made specifically for me and folks of my generation – those that find themselves a little bewildered at current Final Fantasy games, taking refuge instead in turned-based games like Bravely Default against the onslaught of more action-oriented RPG fare. Sure, I like the new stuff, but they don’t often make them like this anymore, and the developers at So Romantic seem to understand that gaping hole in the gaming ecosphere.

Jack Move tells the story of Noa, a street-smart hacker in a cyberpunk world where governments have retreated in the face of monolithic corporations. Noa and her friend and partner-in-crime Ryder scrape out a living pulling heists-for-hire with her Deck, sneaking into places and stealing valuable information to be sold on the black market. When Noa’s estranged father gets caught up and arrested by one of the corporations, she and Ryder reluctantly initiate a rescue operation, eventually uncovering some pretty big secrets. 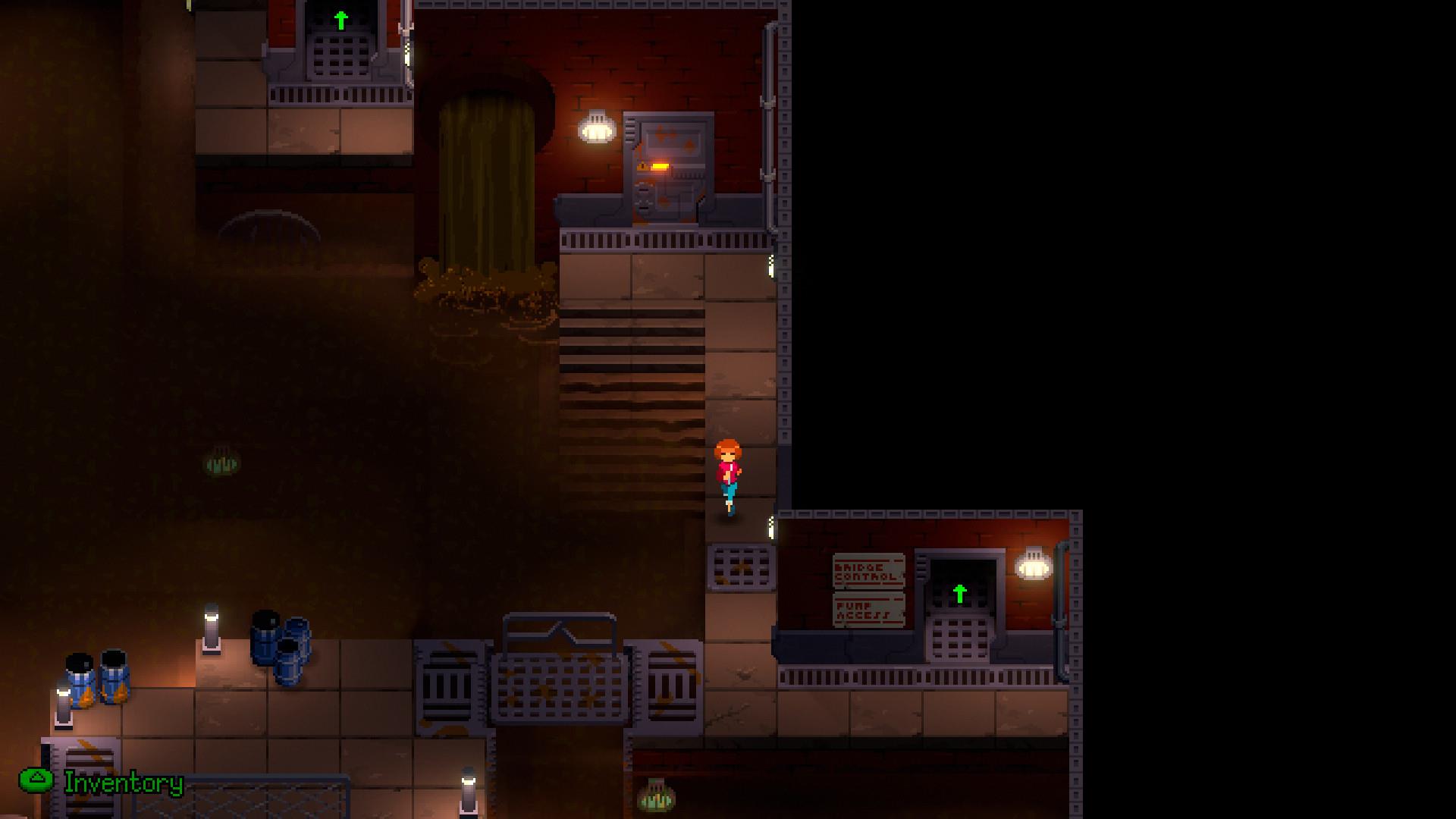 Jack Move is a reminder of how 16-bit games created worlds and characters that felt fully fleshed-out using the broadest of strokes. While the character interaction is etched out through brief text conversations, So Romantic still manages to convey some pretty deep and complex relationships between the main characters, harkening back to the stories told in the era of cartridges and six-button controllers. The pixel-art world is nicely detailed, again revealing the way talented artists can paint a complete picture in a viewer’s head, regardless of the medium.

Of course, a JRPG hinges on its battle system, and Jack Move has a banger. On the surface, the turn-based combat plays out much the way you would expect it to. Players have a menu of possible moves down on the lower left, and the turn order is clearly shown on the upper right. Noa takes turns slinging attacks at her enemies while trying to survive whatever they throw at her. 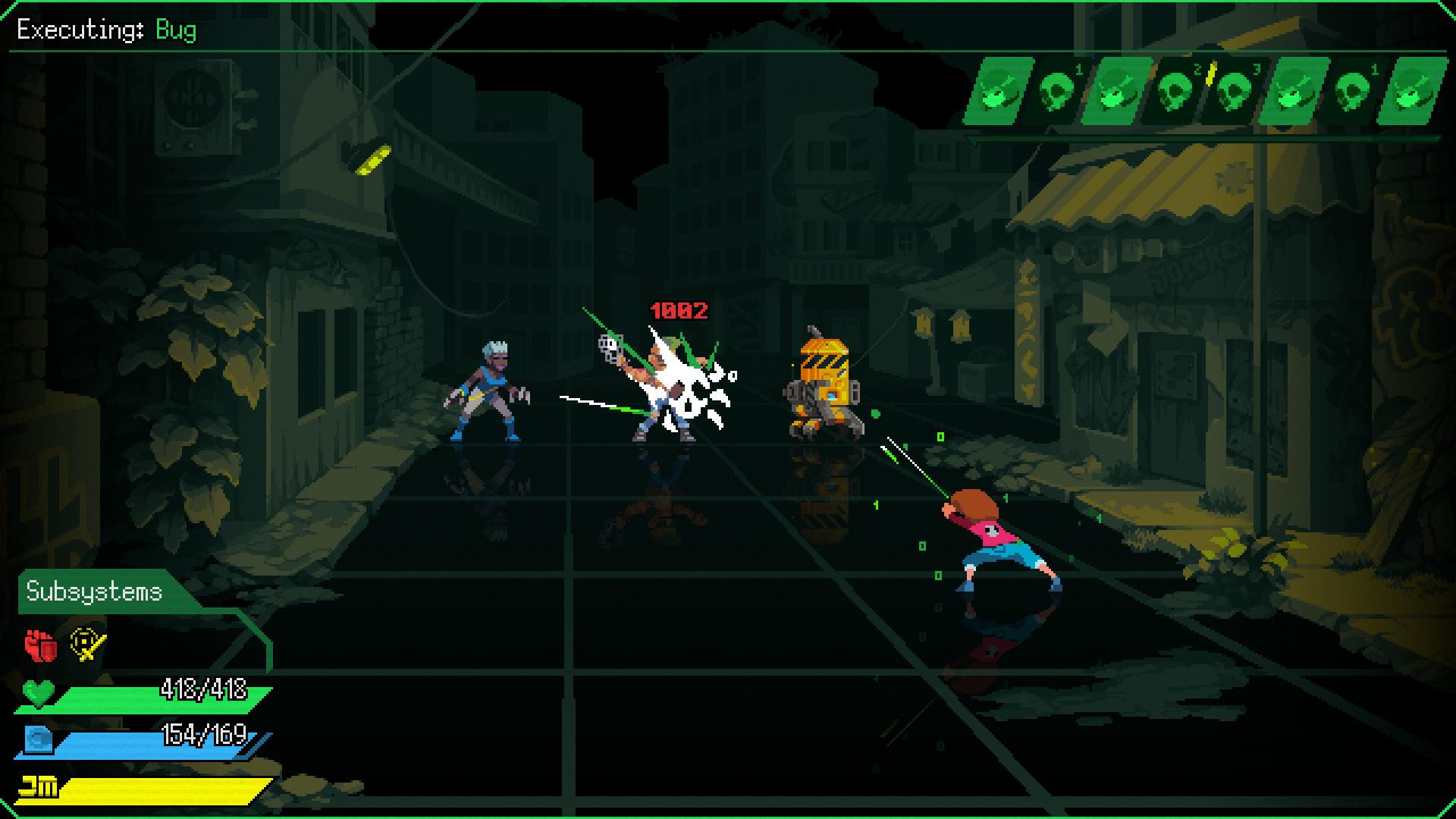 Down a little deeper, though, is a complex and flexible battle system that players can use to devastate enemies if they put the effort into learning the ropes. As a character in a cyberpunk game, Noa has a lot of upgrades at her disposal. She can upgrade her hardware with modules that can do automatic tasks (stuff like auto-counters and crit boosts) and can also upgrade her RAM to slot in more software abilities (it’s best to think of software abilities as spells – heals and attacks).

The game’s enemies come in three categories, Wetware, Electroware, and Cyberware. Each of Noa’s software attacks can do damage to any of these enemy types, but most of them specialize in one enemy type in particular, delivering an extra burst of damage if you line things up correctly. The entire system is color coded in the UI, so you can easily tell what type of enemy you are facing off against. Every piece of software in the game levels up as you use it, resulting in some annihilation-level strikes when you use a fully-leveled attack correctly. 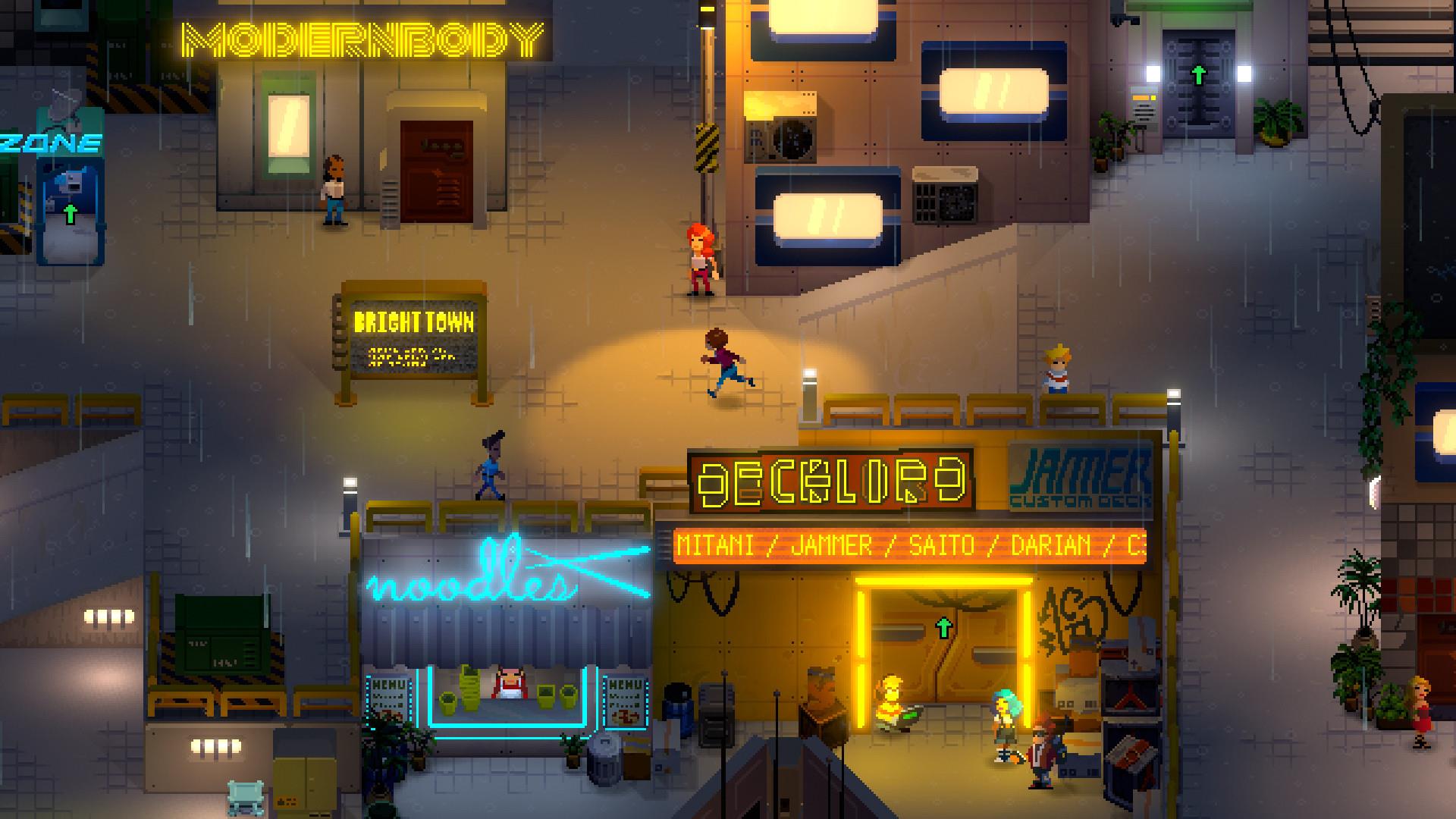 Noa also has “Jack Moves”, which are ultimates that slowly build up to be dropped on unsuspecting enemies. These feel similar to summons in Final Fantasy, but can be used far more frequently. Jack Moves are extremely powerful; I beat the second boss in the game with one button click by dropping a Jack Move on him and his party.

There is a ton of interesting hardware and software upgrades to which Noa has access right from the start of the game, but they all cost a fair amount of money. Luckily, Jack Move is tuned to allow for some easy grinding for cash and XP. I suppose that it is possible to play Jack Move without grinding, but as soon as an area that allowed it opened up, I went hardcore and spent a couple of hours turning Noa into a wrecking ball, providing her with a mountain of software and hardware options to mess around with. I am, after all, a product of my generation. We grind. 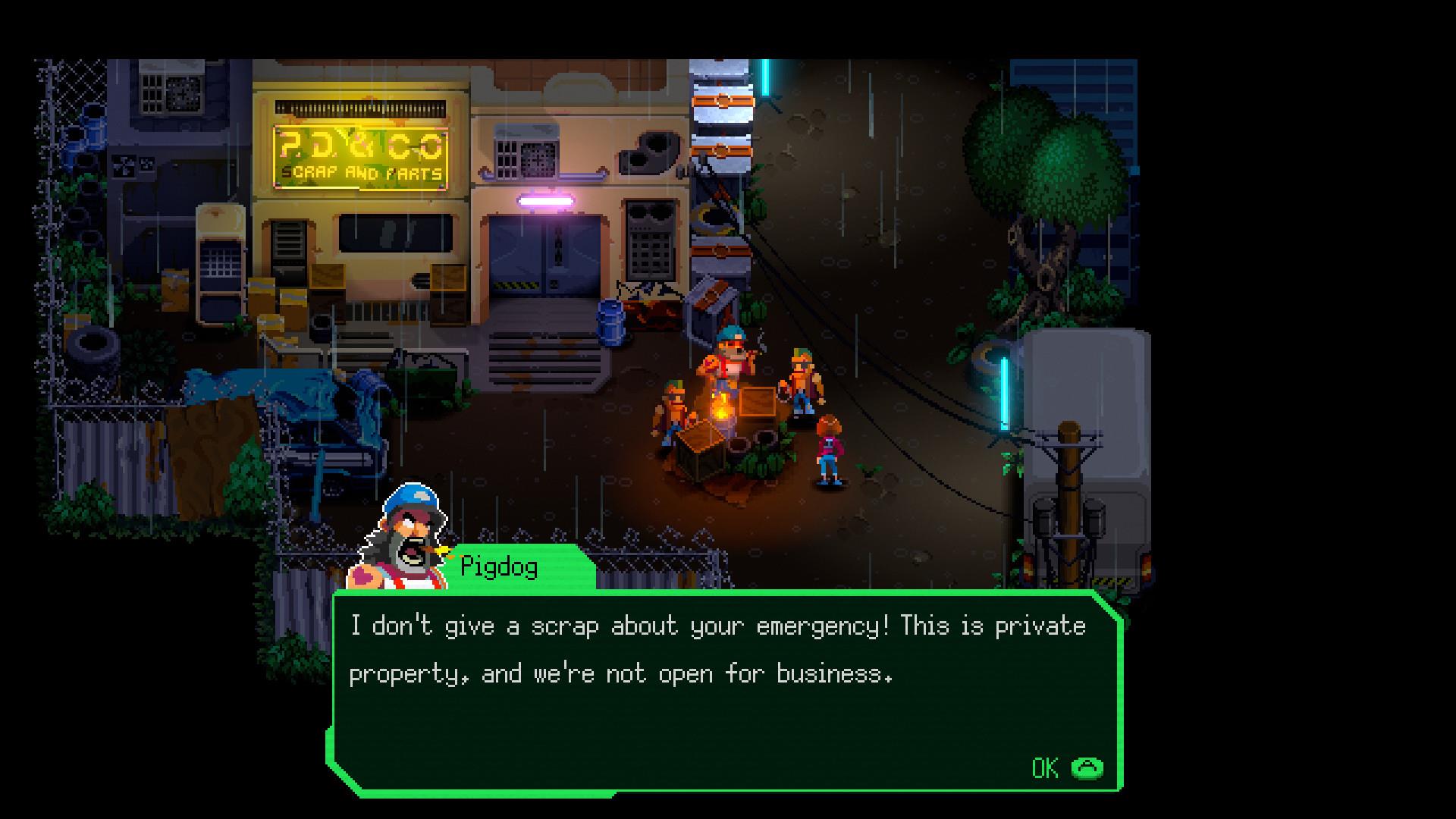 In a brilliant touch, players can adjust the level of random encounters in the pause menu. You can turn them off entirely, or for players like me, crank them up to the point where you can’t walk four steps without fighting some chumps. I added at least two or three hours to the run time of Jack Move just running around in circles. The game eventually caught up with me, but I was way out in front of the curve for a while.

I don’t want to say too much more about Jack Move. As the game is so brief, I think it is best to let players discover the pleasures of Jack Move on their own. But as someone that spent hundreds of hours building up my characters in 16-bit RPGs, I can say that this game has my full endorsement. As I get older, I appreciate brief games more and more, and Jack Move is a perfect example. In a genre that typically stretches on for days, Jack Move is short, sweet, and to the point. It is a sign of the developer’s full understanding of what players love about turn-based RPGs that Jack Move leaves the player feeling as satisfied as some much longer games. I can’t wait to see what So Romantic does next.

Jack Move is an abbreviated JRPG that feels as satisfying as some of the longest classics in the genre. With a great, nuanced battle system and a well-developed cyberpunk world, Jack Move shows that you don’t need 50 hours to deliver a great story with memorable characters. This is a game for fans of the 16-bit era of JRPGs, who should not hesitate to pull the trigger.