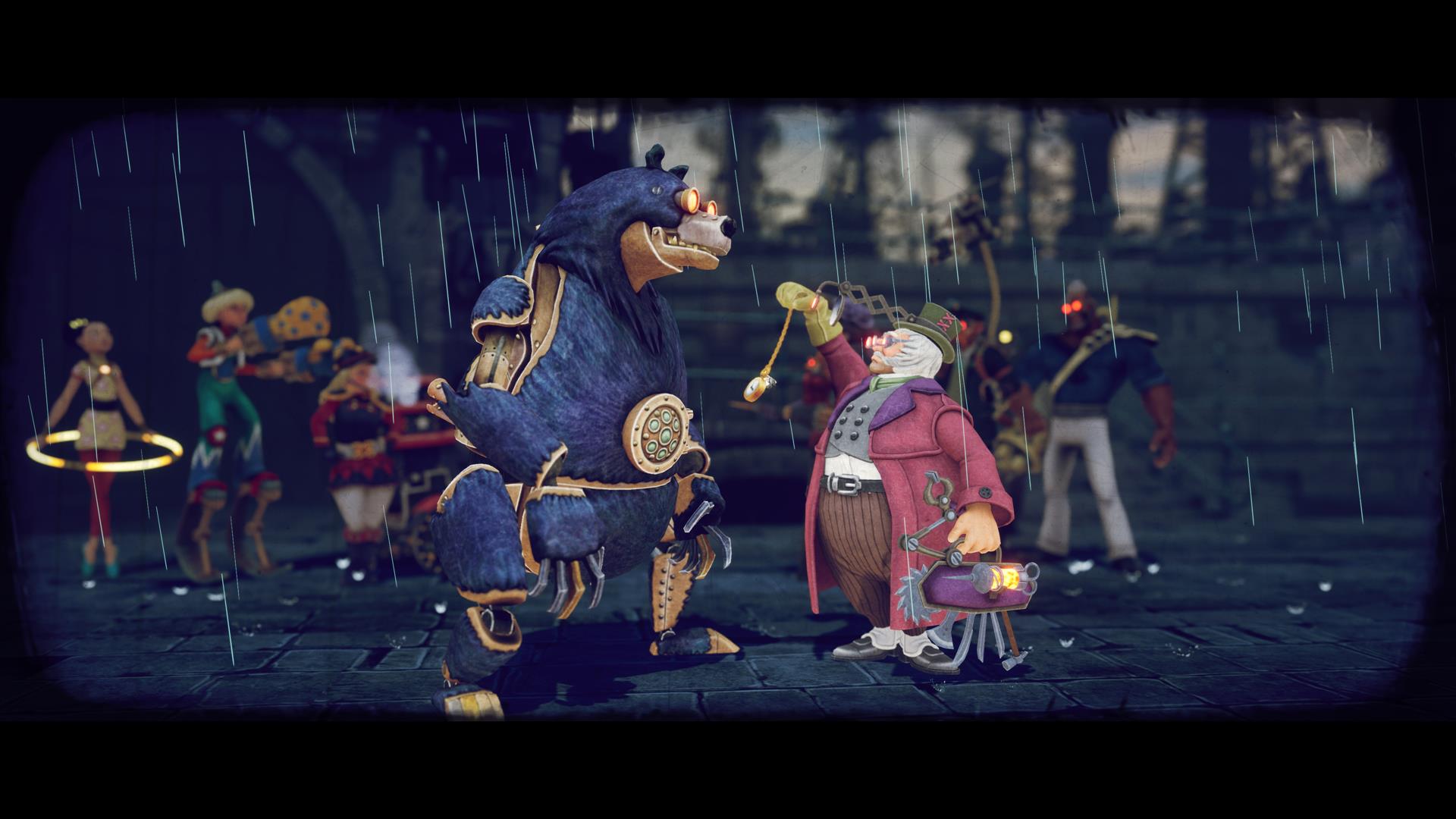 Circus Electrique is a new game from Zen Studios and Saber Interactive that – like a high-flying circus act – defies description. There is a battle system that follows many of the conventions of turn-based RPGs, but I would hesitate to classify it as such. Elements of management games are present, with a strategic minigame that has players planning and executing circus performances that feels almost like a deck-builder. There is exploration, and a variety of finances and resources to manage, and a lot of care and nurturing is needed to keep your performers happy and healthy.

There are so many systems at work in Circus Electrique that it can at first feel completely overwhelming to new players. You may have seen a lot of this stuff before, but I doubt you’ve seen it stitched together in quite this way. Indeed, the game and interface are so unique and complex that the game pauses periodically to ask the player if they are keeping up. Really. 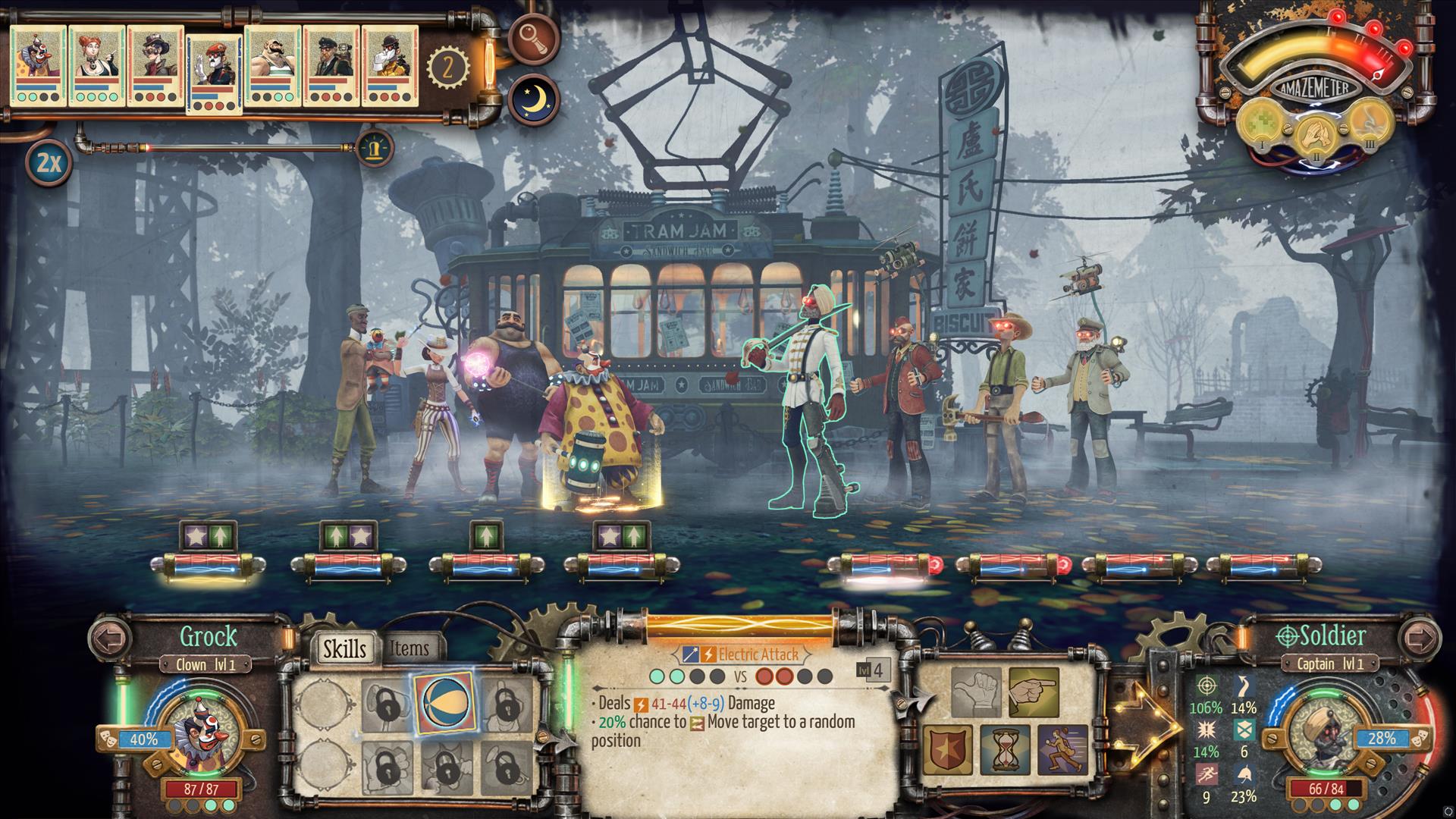 Though Circus Electrique does a good job of slowly introducing its various concepts, it is still possible to get lost. But stick with this game until you slide into its groove, and you will find yourself happily spending hours fiddling around with its various controls and widgets. There is so much to do that it takes a while before it all clicks, but once it does, it’s just a matter of taking a step back to see how elegantly all of the different elements in Circus Electrique fit together. It is a jigsaw puzzle of a game, but damned if it doesn’t make a very satisfying picture once it comes into focus.

There is a steampunk story in Circus Electrique, taking place in early 1900’s London. The super-short version is this: the populace has started going berserk, and some of the only folks not impacted are circus performers. Led by an intrepid young reporter and her pet Lion, the circus-folk set out on expeditions into London via a Slay the Spire-style map, taking down violent uprisings and trying to figure out what has made everyone go crazy. Cut scenes are played out via spare slideshow-style art, but are fully voiced with quality performances. But all of this story is just backdrop to give a bit of structure to the game’s many systems, which contain a ton of mechanics which – if not entirely new – I’ve not encountered in a game before. 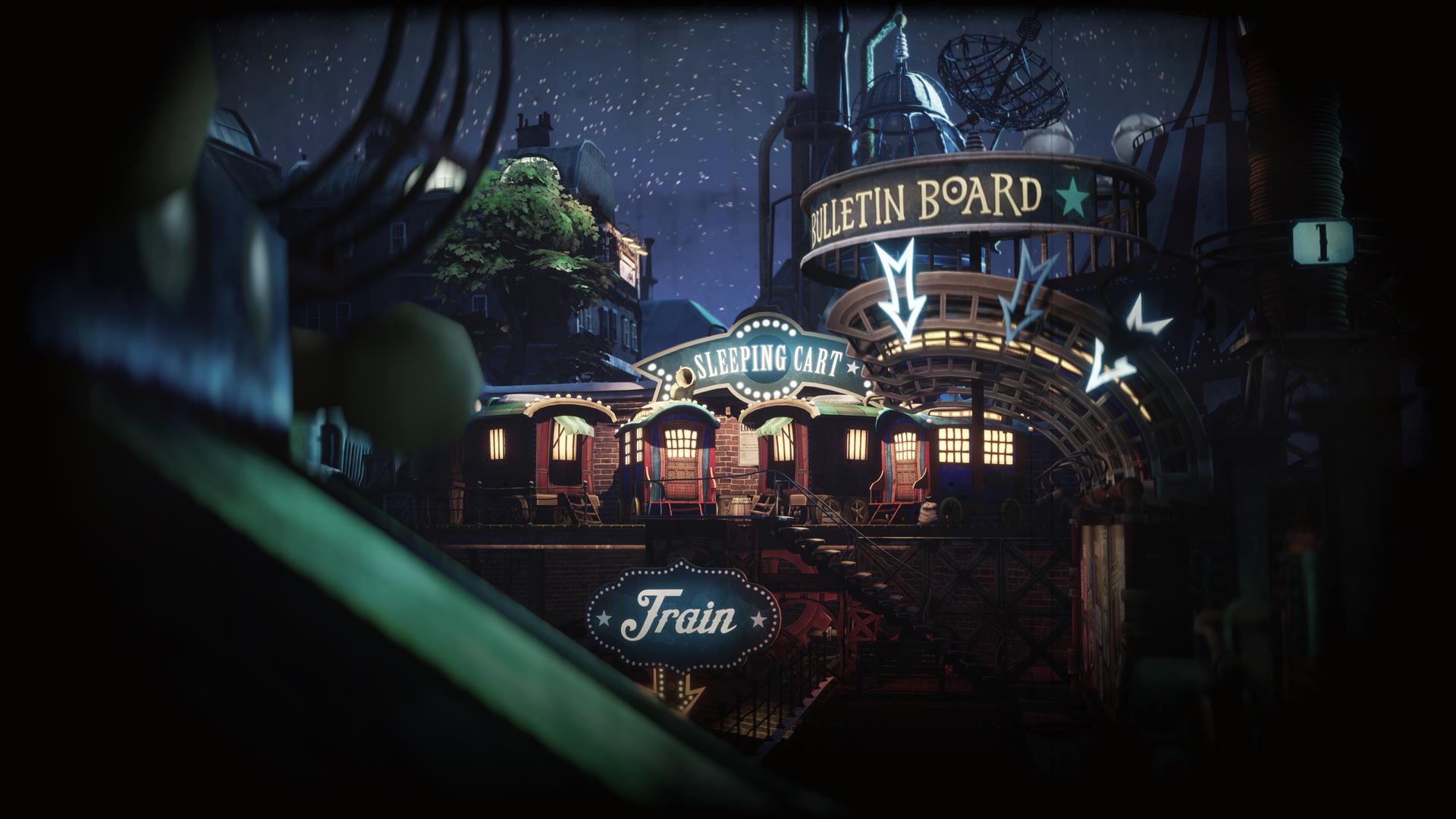 Take the combat, for example. Players roll into a battle with four characters in their line-up, each of which has six powers at their disposal. Each character has two primary ways to get hurt – health and devotion. Health is just what you think it is, but devotion is more like “how into this circus/battle life is this snake charmer, really?”. Taking hits and performing poorly can sink a character’s devotion. In practical terms, if a character’s devotion sinks too low, they will simply bail on the battle and run away into the night.

Characters’ six powers each have different impact, and they must be read carefully, because they aren’t always the same. Two clowns, for example, could have slightly different powers. Some powers do damage to health, some hurt an enemy’s devotion, some do damage at the detriment to your own devotion, some buff your whole party. And most insidiously, some powers change characters’ position in the lineup, which is far more impactful than some might expect. 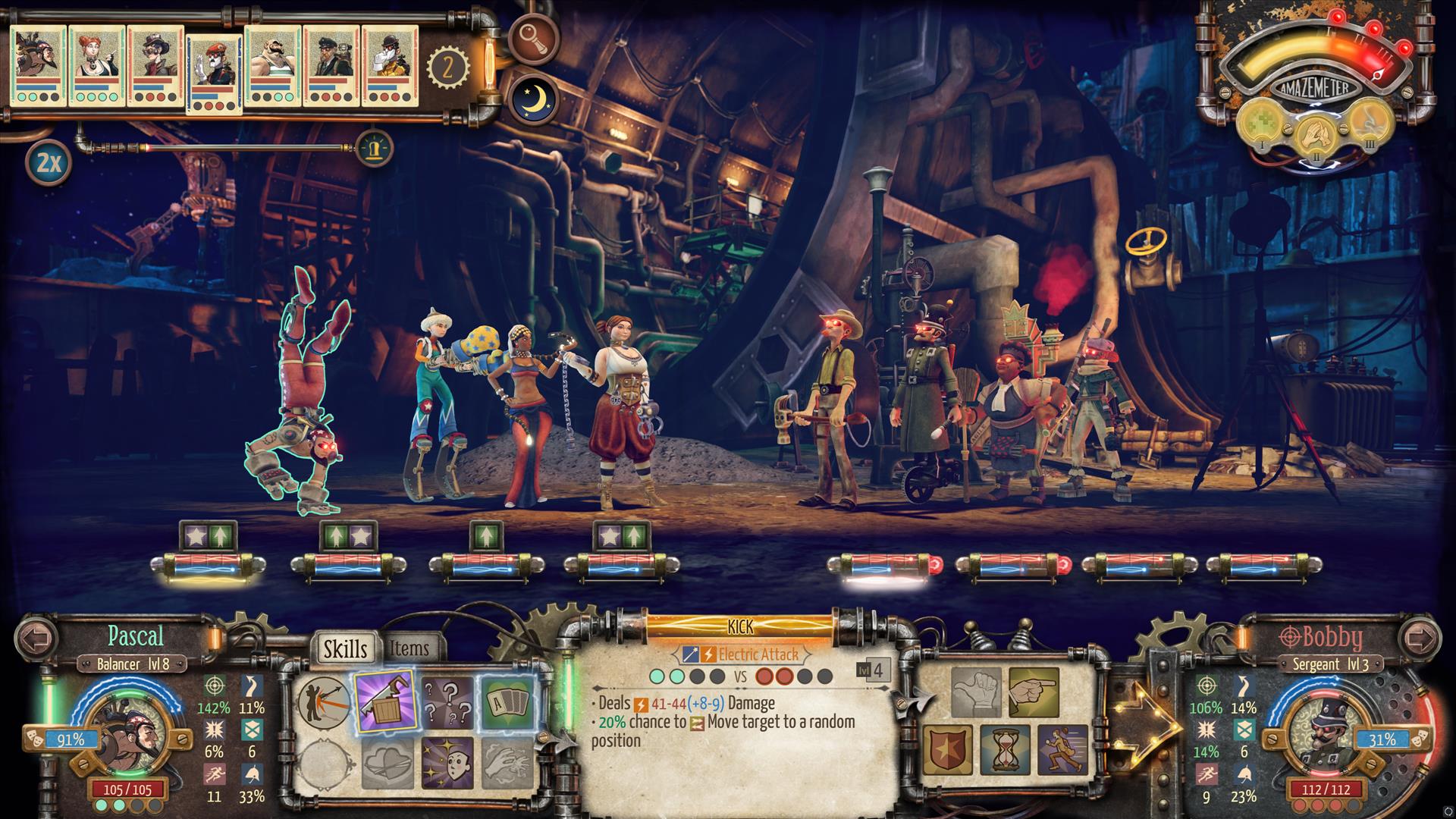 This is because certain powers are only available when a character is in a specific position. Clowns, for example, should be in one of the front two spaces for the majority of their attacks to fire. If they get sent to the back of the pack, most of their stuff won’t work. Support characters are far more effective in the back, but they do have one or two powerful attacks that can only be triggered from the front. Managing your position is key, as is managing the position of your enemies. Grabbing the guy from the back and yanking him up to the front can throw your enemies into utter disarray.

Did I mention that each character’s powers must be leveled up individually? And that they rely on certain materials to level? And that you have to complete circus performances to earn those materials? And that characters performing in the circus can’t participate in battle? And that performing in the circus is one of the only sure ways to raise a character’s devotion, so you have to take your strongest guys out of the lineup to have them perform? Yeah, it’s a lot.

Let’s talk about the performance minigame. Circus Electrique is played in “days”, so every day you can do one performance and fight one battle. At the end of the battle, you learn how the performance went and get rewards for both. Then you start a new day. 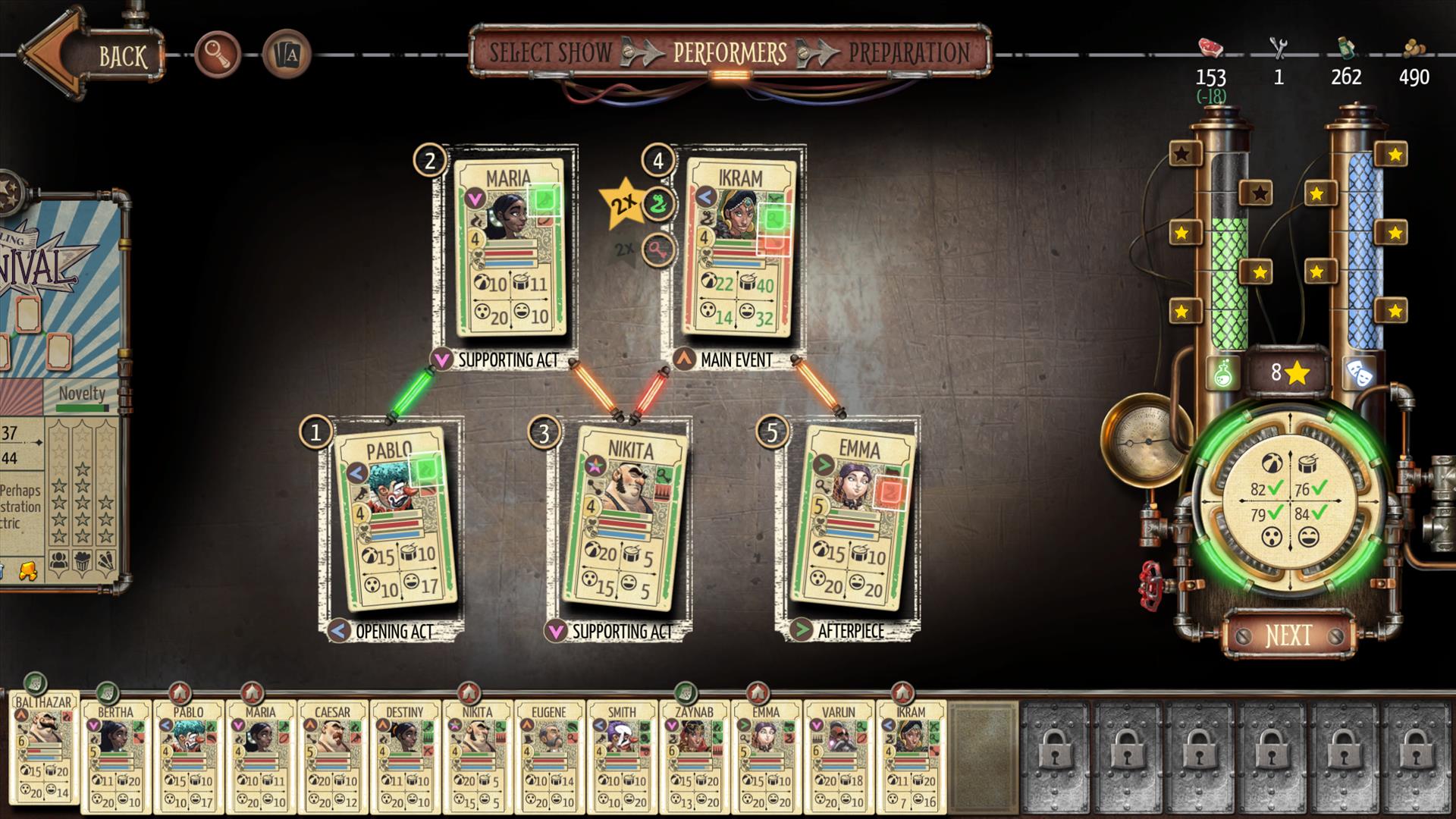 Performances are played out through several templates. There is the show for country bumpkins, the horror show, the mystical show, the afternoon matinee, and so on. Each of these templates calls for a different set of performers. Some are openers, some are headliners, some are closers, and there are a few very valuable performers around that can do it all. So, say you have a show that calls for two openers, a headliner, and a closer. You would think you could just pick some performers and plug them in there. But no, each performer has their own specialty. You can’t just take a closer and have them open the show. It won’t go well.

So you’ve got to put your folks in the correct position. Fine. But, sad times, that particular Fire Eater you chose only likes to work with clowns. And your headliner is a Strongman. They won’t work together well, and the show will suffer. You need to pull one or the other and substitute in some folks that will get along. You have to find the right people and put them in the correct positions next to performers they actually enjoy if you want the thing to go well. It is, once again, mad complex, but very satisfying when you figure it out and pull off a successful show. 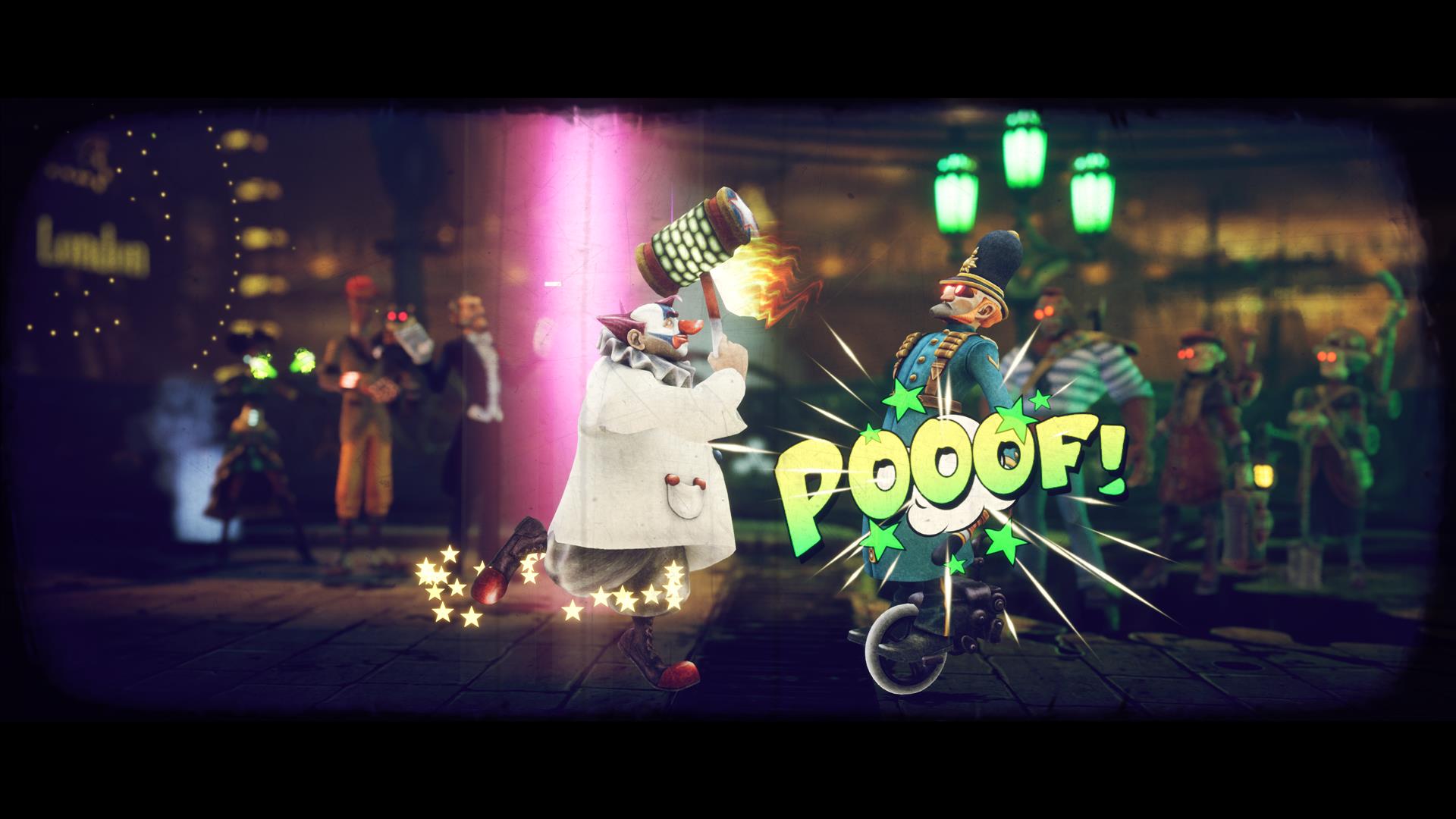 Luckily, Circus Electrique is not a game that hurries the player through the decision-making process. Players are free to tinker around with all of the widgets in the game for as long as they like, and no decisions are final. There have been times that I put someone in the circus show, and then realize that I would rather take them into battle, so I pull them out and substitute someone else. To do this, you need a pretty strong stable of performers. Luckily, you can hire new folks as often as needed, which also helps out because death is permanent in Circus Electrique. If they go down in battle, they are gone for good.

There are a ton of other interfaces that unlock as the game progresses, each with its own benefits to the player – places where you can create items to help you out, places to let your characters rest and recover devotion, all sorts of widgets to fiddle with in between excursions. And one by one, they all slide into place to make a cohesive – though admittedly complex – whole. 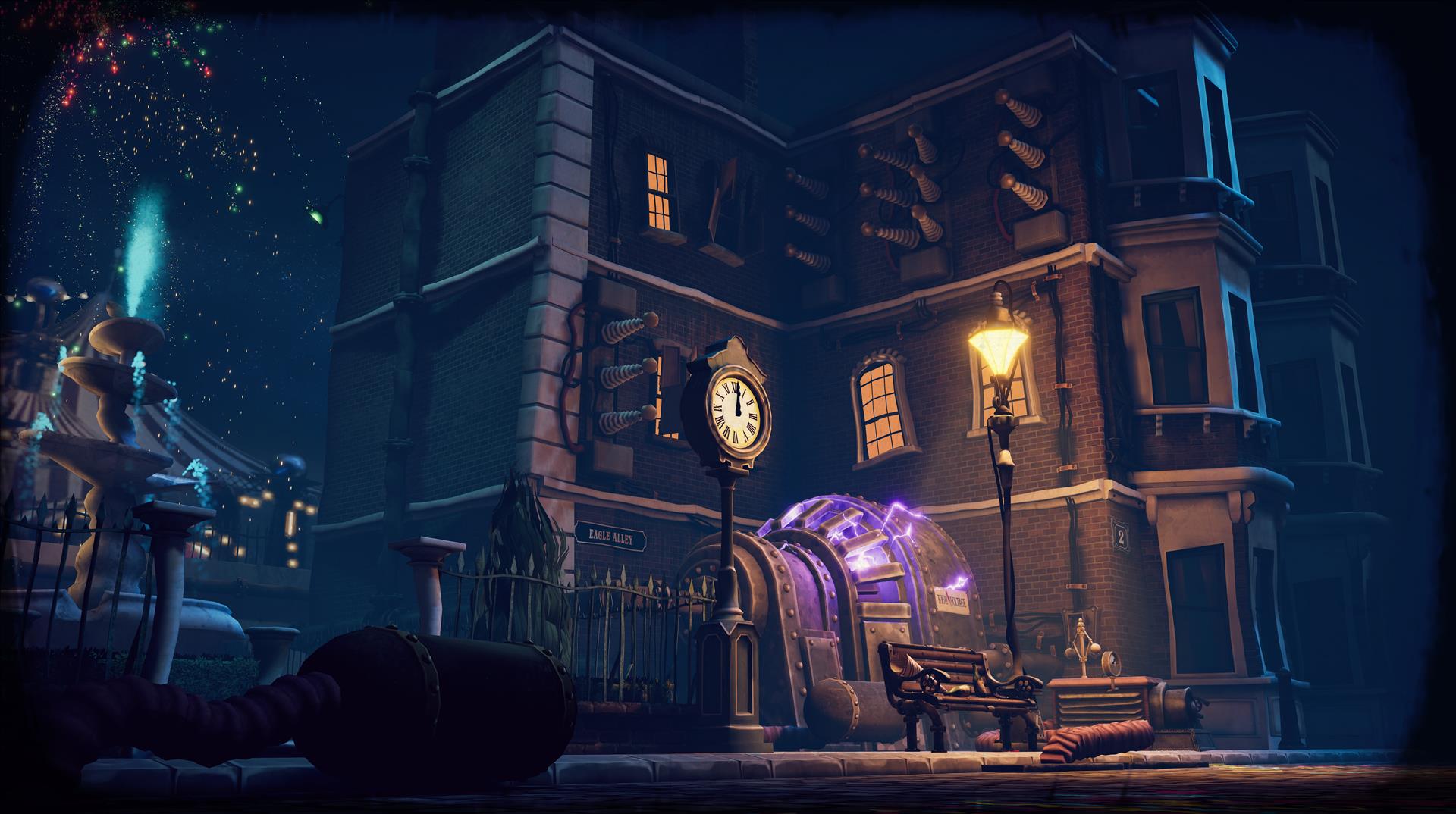 I would recommend Circus Electrique for turn-based RPG fans that are looking for something a little deeper than the norm. While the story elements are light, the systems and mechanics are complex and rewarding. Go into this one with the mindset that you are going to take your time and experiment with the interface, and don’t try to rush things. Before long, you’ll be pulled into Circus Electrique, and hours will melt away.

Circus Electrique is complex and daunting at first glance. But when approached with an unhurried mindset, this RPG/management hybrid can be deeply rewarding. While the steampunk story elements are a bit light, the game more than makes up for it with strategic gameplay mechanics that I simply haven’t encountered elsewhere. If you can settle in for the long haul, you will find yourself swept up in this rich and unique experience.