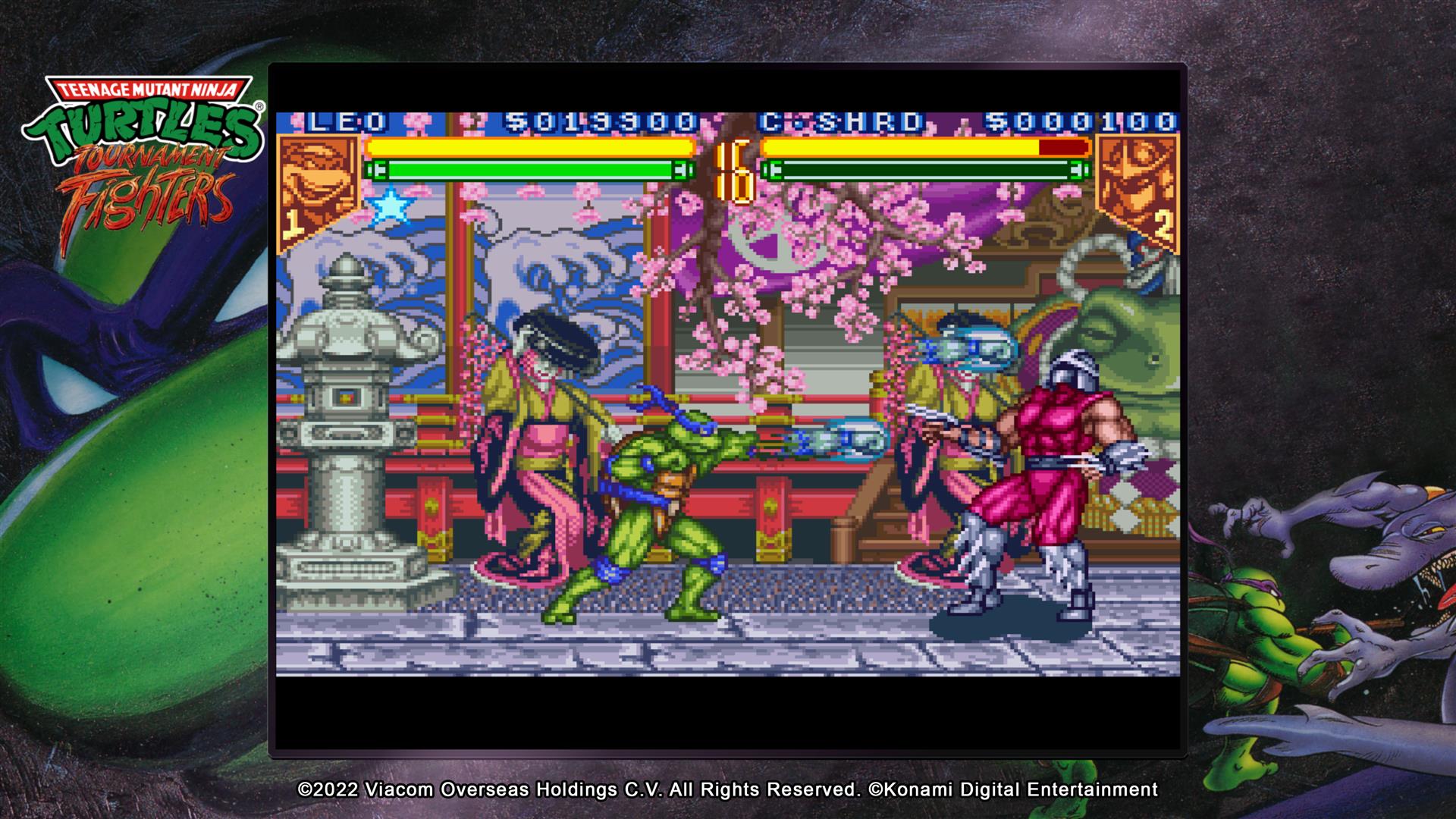 Written by Joseph Moorer on 8/31/2022 for PS5
More On: Teenage Mutant Ninja Turtles: The Cowabunga Collection

1989, In Columbus, Ohio, there is a roller rink I used to frequent as a kid. It's called United Skates of America. And besides having the best music and roller skaters in town, it also had video games. One in particular was the ever popular Teenage Mutant Ninja Turtles arcade game by Konami. This four player cabinet was massive, and it cost $0.25 to play. You would get two lives total (thanks dip switches), and you would be served the foot soldier beating of a lifetime. Teenage Mutant Ninja Turtles was based off the cartoon series, so all the familiar lines of dialogue and evil Shredder laughs were here. Running back to my mom to ask for money was a thing, and five whole dollars later, I only got to level 3. Sometimes I was just stuck watching the attract mode. Listening to the clangs and punches. This is it. I declared it one of my favorite games of all time. 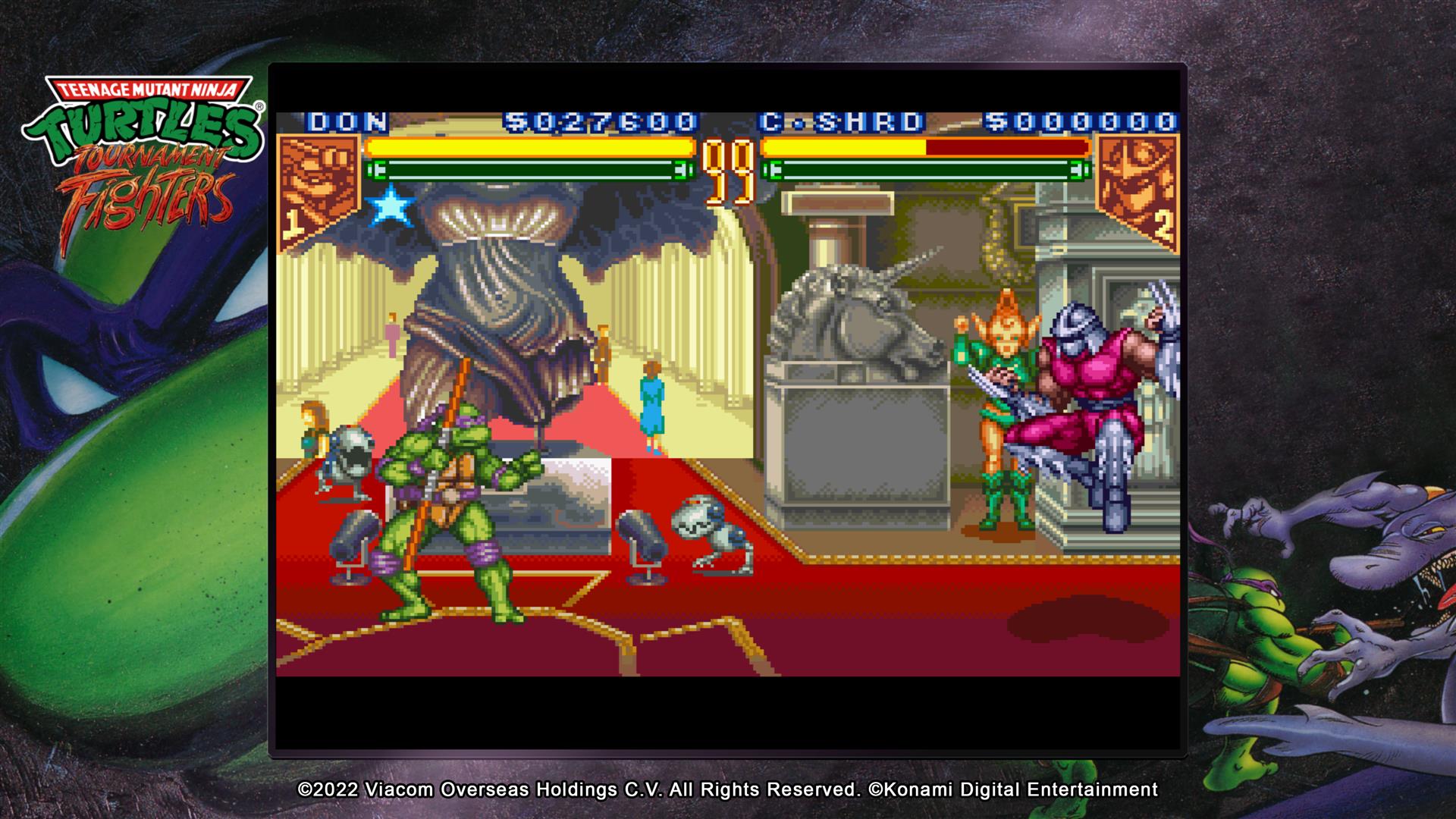 The home version came out for the NES, but it wasn't the same, even though it was all we had. It wasn't until 2004 that people could play this particular game at home, but only within another TMNT game. Years later, the game appeared on Xbox360, with online and couch play up to four players. Even Arcade 1up released a 2 player mini version, and a 3/4 scale 4 player cabinet. Now, here we are, in 2022, with not only a full playable arcade perfect home version of the game, but TWELVE others, in Konami's latest release Teenage Mutant Ninja Turtles: The Cowabunga Collection.

I'll start by saying this. In my opinion, these are PERFECT versions of the games from their respective platforms. TMNT Arcade plays, and sounds just like I remember. The winners don't do drugs advertisement shows up. And yes, the "Pizza Power" song is here, in full. The NES game (Ultra) has all the respawn, flicker, and slowdown of the original game. The Gameboy titles aren't enhanced and in color, they're in black and white. The Genesis titles have all the gritty sounding voices and music. They pulled no punches with these ports. They are 100% authentically here. What's even better about them is that you can get right into any of them with no load time. As soon as you choose one, you're in. Some even let you choose your turtle before the intro screen. With a touch of a button, you can also climb right out. Every sound, nothing enhanced. All of it, for better or worse, is here. I say worse, because those Gameboy games are...Gameboy games. And yes, those 1 speaker chip tune sounds are there too. If there's someone out there who does great ports, it's Konami, and Digital Eclipse. 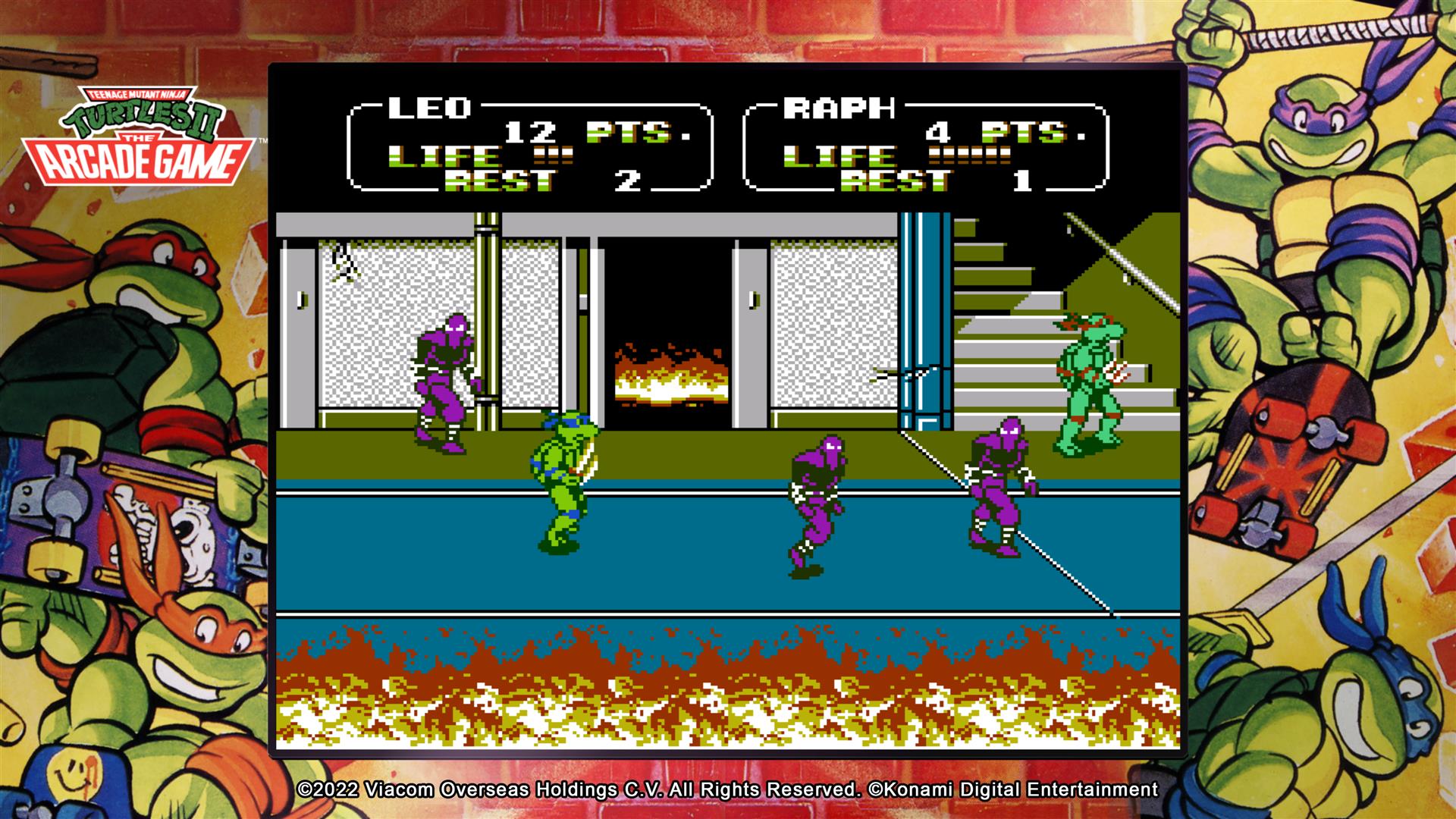 Your main menu/splash screen gives you 4 quick choices. Games is something you want to see first. When you open this, you get b-roll footage, plastered on top of TMNT comic book pages, along with some great options. You can watch a full playthrough of any game. You can play the US or Japanese versions of the game, which looks like just the titles and in game text changes. But the coolest thing here is something called Enhancements. The Enhancements menu options vary per game. In some of your side scroller games, you can choose what level to start on. In your fighting games, you can choose to unlock bosses. For those who aren't aware, NES games didn't have much memory, so if there was too much going on in the screen, either there was a flicker, or the game would slow down to a crawl. Well, with the enhancements feature, you can TURN THE FLICKER AND SLOWDOWN OFF in the NES games. There's also God mode for the arcade games, and a couple of stage select features for the Gameboy games. All this is readily available, no unlocking necessary. 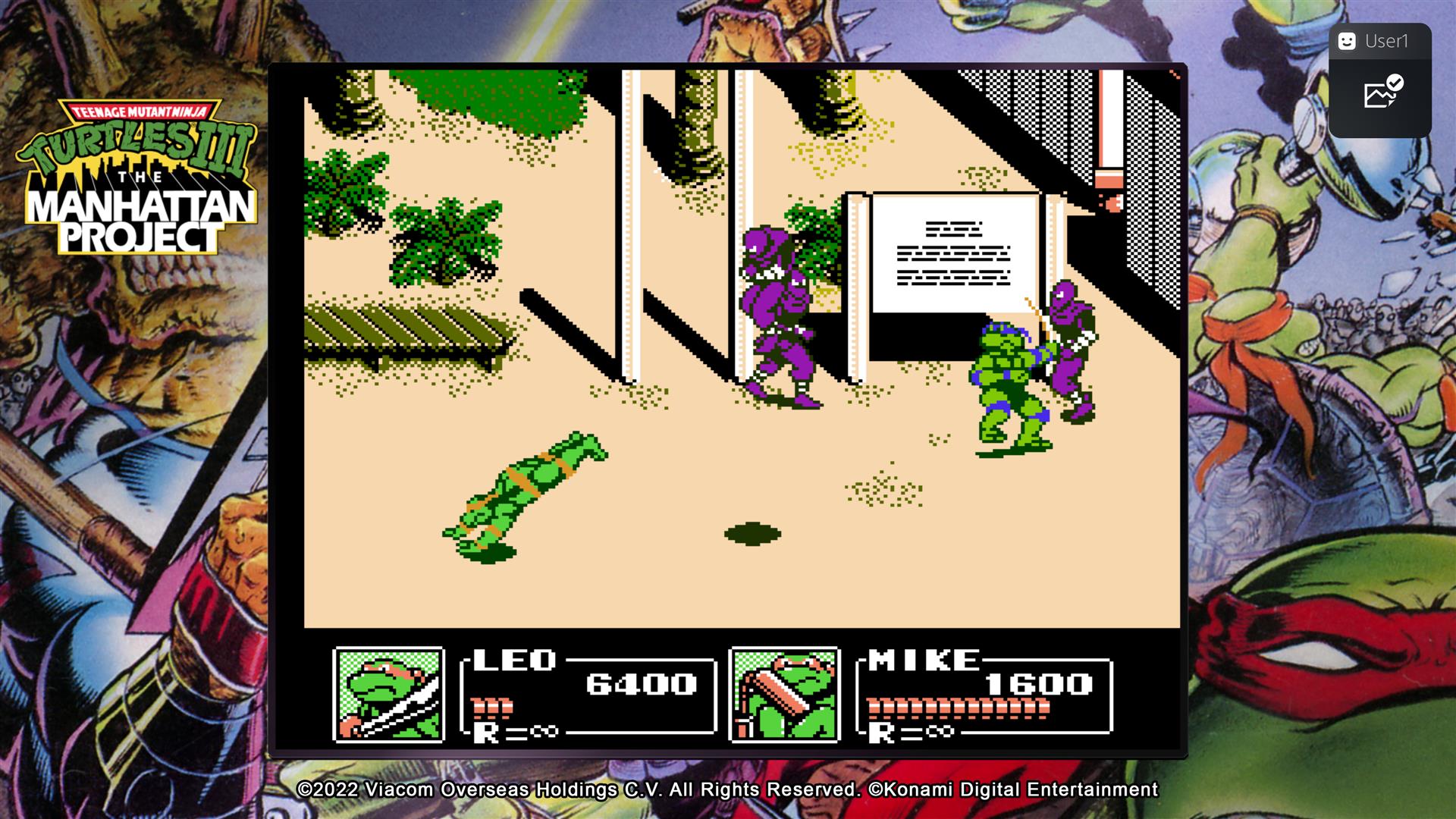 When you're in any game, at any time, you can hit the R1 button to reveal even more options. You can save and load the game at any point, seamlessly. You can remap your controls, which is great for the fighting games, or if you want to change your jump button in the arcade games. There is an option to change the screen size, between full, wide, or original. All of these games look great in 4:3, and not so much in wide screen. You then have filter options, which go from TV, LCD, Monitor, and off, and there is a box art border you can toggle on and off. Last but not least, each game has an accessible strategy guide. The strategy guide will vary per game. You may have a map for some, and a move list for the fighting games, or just some fun banter for the arcade games. This strategy guide can be zoomed in on and interacted with, with the touch of a button. There are also secret codes within these strategy guides. So if you don't want them, you probably are better off not opening these. Finally, you can quit a game at any time within this game menu.

A quick breakdown of the games for those of you who may be experiencing them for the first time. You have three categories here. Your side scrolling beat-em-ups where countless enemies come to take you and your team down. The more turtles on the screen, the more enemies you will encounter. The arcade beat-em-ups let you play four at a time, while the home versions restrict you to two. You only have your weapons, but different special items throughout the games will help you along. If you get a pizza, it refills your life. If you get a "bomb" pizza, it makes you invincible for several seconds. Then there are the one on one fighters. Those are your Street Fighter/Mortal Kombat fighting style games. There are three completely different versions of these games, even though they are titled the same, with all different characters. The SNES version is by far the favorite of mine, and the only one online. Then there are the adventure titles. You will get a different turtle, one at a time, to navigate through platform and side scrolling levels. Instead of getting "shell shocked", you are "captured", which is ok, because there are places within the game to regain your fallen brothers. The NES title is by far the toughest one of the series. 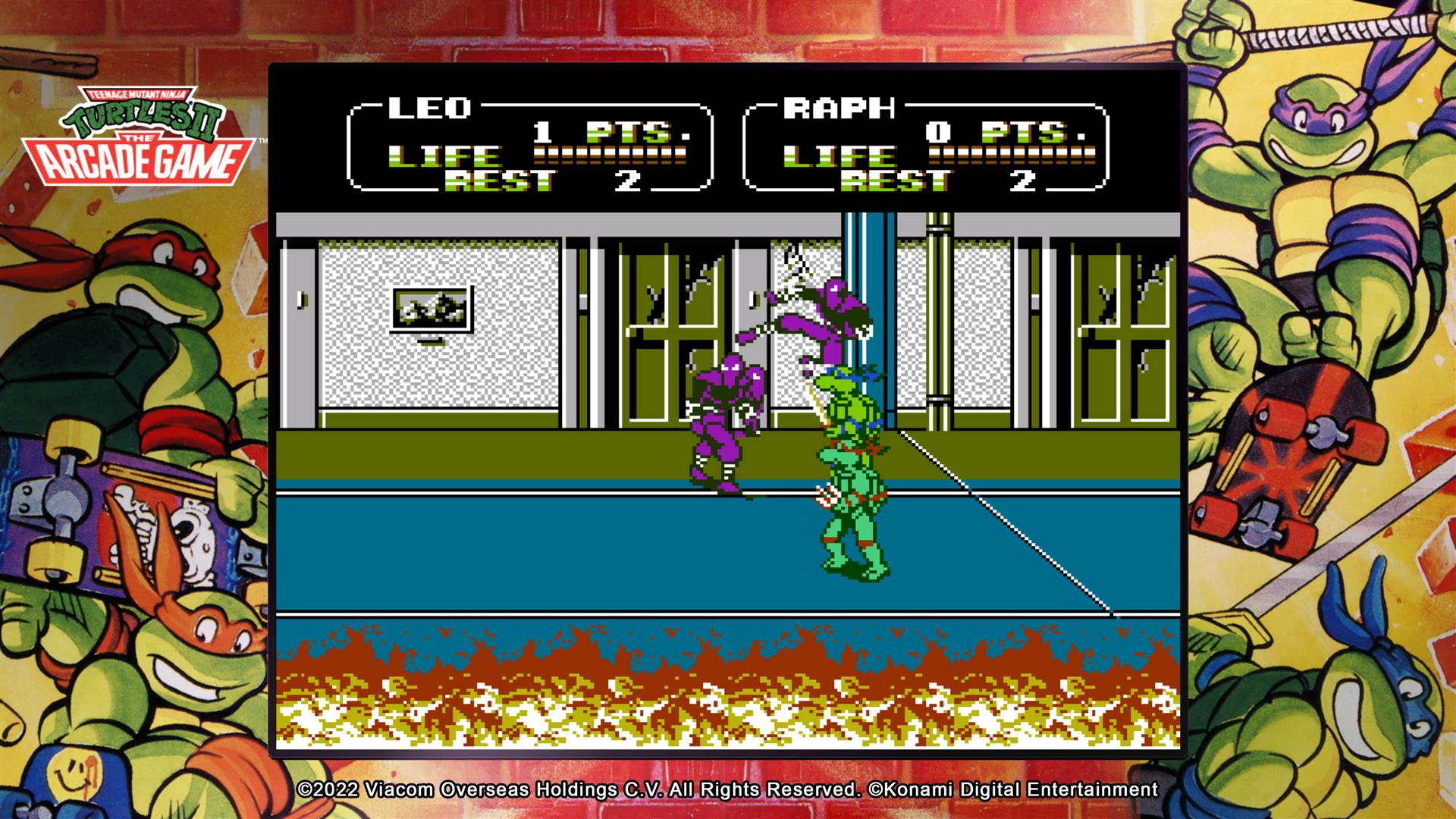 So I now have perfect versions of all thirteen games, both U.S. and Japanese versions, and if I wanted to tailor that perfection into a beautiful disaster, I can do that to. There can't possibly be more. This is the Cowabunga Collection, and this would lead us to the Turtle's Lair. This is your museum. Your gallery. Your place to go to to listen to every in-game music track. There are boxes and manuals for each game. There's a strategy guide for all 13 games. There is so much more in this gallery that I want to spoil, but I'll just sum it up like this. There are 3700+ pieces that you can fully interact with, and it is probably the other half to the selling point of this game. There is a TON of stuff here. You will do yourself a disservice if you don't go through this with white gloves, and touch every single beautiful piece of this gallery. Kudos to whomever put this together. It is a sight to see.

Now, because Konami loves you, you get to play 4 of these games online. The Arcade beat-em-ups, The Hyperstone Heist, and the SNES version of Tournament Fighters. You can create your own lobby, or join any of them that are already available. When creating your own lobby, you can set it to public or private, and you can choose to have people join while the game is in progress. You can also set a frame delay, in case you think someone else will be using slower internet. Online games of Tournament Fighters ran with very little lag, if any. 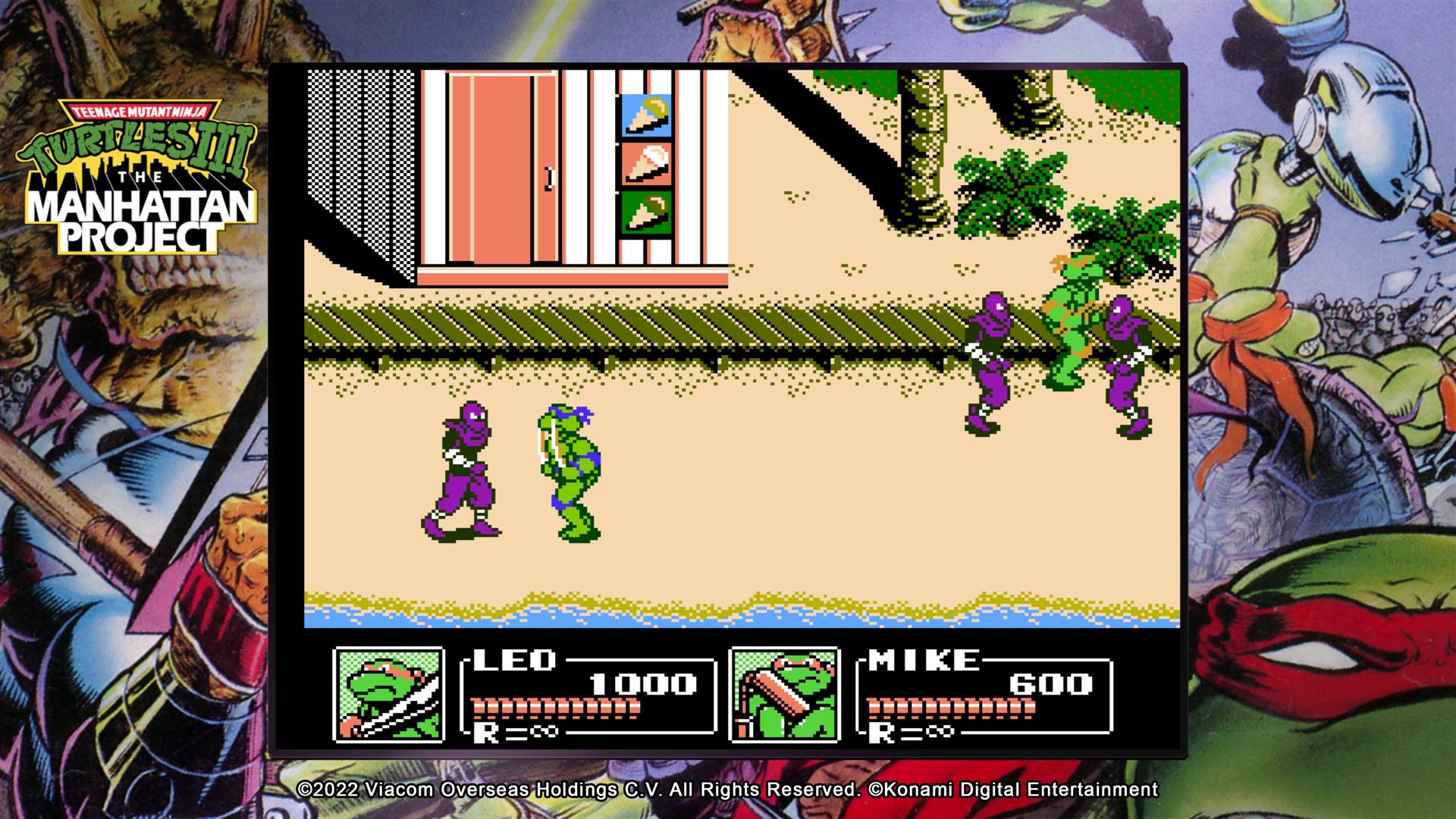 There are a few difficulties with online play. The Arcade titles were very difficult to get into. Also, if someone joins in, and just keeps giving themselves lives, but then leaves, you're stuck with that turtle for the rest of the game. And you can't progress in a side scrolling beat-em-up, if all characters on the screen aren't moving right. There also seemed to be a hiccup when random players joined the game. It stops, loads that person in, and then that person has to push start. This doesn't seem ideal, since the action is fast paced, and the stoppage could frustrate some players. This could be the day of release strain on the servers that some games see, so take this all with a grain of salt. When it works though, it's an amazing experience. Also, save yourself. Don't play with randos if you don't have to. You also have the option to drop out with the tap of a button. However, you cannot change any other settings if the lobby isn't yours. Use that for whatever it worth.

In all, this is a stunning package, possibly the best that Konami and Digital Eclipse have produced. It is beyond complete, and if you are a fan of any of these games - or the Turtles in general - you owe it to yourself to pick this up. If you need me, I'll be in the basement, pretending I'm at the roller rink.

We now live in a world where we have a brand new TMNT game, and the granddaddy of them all, with 12 of his other children. Between the Gallery, the enhancements, the different types of games, and online play, you can't beat the $40 price tag. These games will keep you busy and give you a history lesson at the same time. There's no reason to skip this collection. Konami did us proud, so go get it and play it with everyone. Your childhood deserves it.