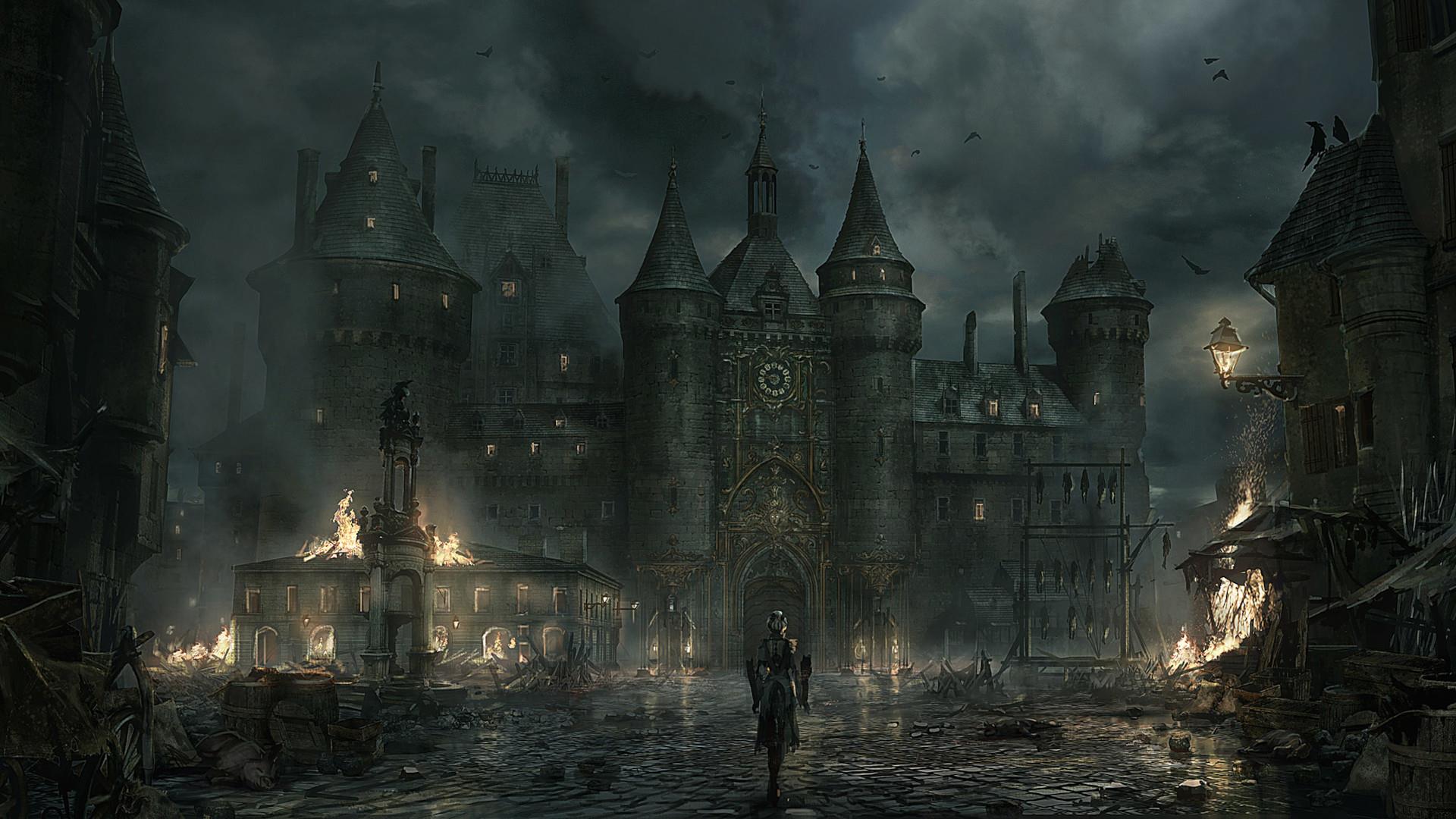 After developer Spiders gained more widespread recognition with Greedfall, the French development house has been busy cooking up Steelrising, a Soulsborne action role playing game, retelling a darker alternate version of the French Revolution. King Louis XVI has unleashed an army of mechanical automata to silence the rebellion against him, raiding the streets of Paris and killing everyone in sight. You play as Aegis, an intelligent clockwork soldier created by Jacques de Vaucanson and sent by Queen Marie Antoinette to stop the king and discover the secrets of the automats. Spiders does an exceptional job setting up the premise and challenging the player with brutal combat, but unfortunately Steelrising is eventually bogged down by various janky mechanics and quality of life concerns.

Steelrising aims to envision this part of European history with a fresh coat of steampunk, and does so extremely well with its art direction and visual presentation. The dark and gothic architecture of Paris really gives you the feeling of stepping through history itself, even though the streets are plagued with deadly clockwork tyrants instead of humans. You get to visit some iconic locations like the Louvre, the Bastille fortress, and the palace of Versailles. Even the various machine types are designed with this philosophy in mind, including some that are modeled after guillotines and centaurs. 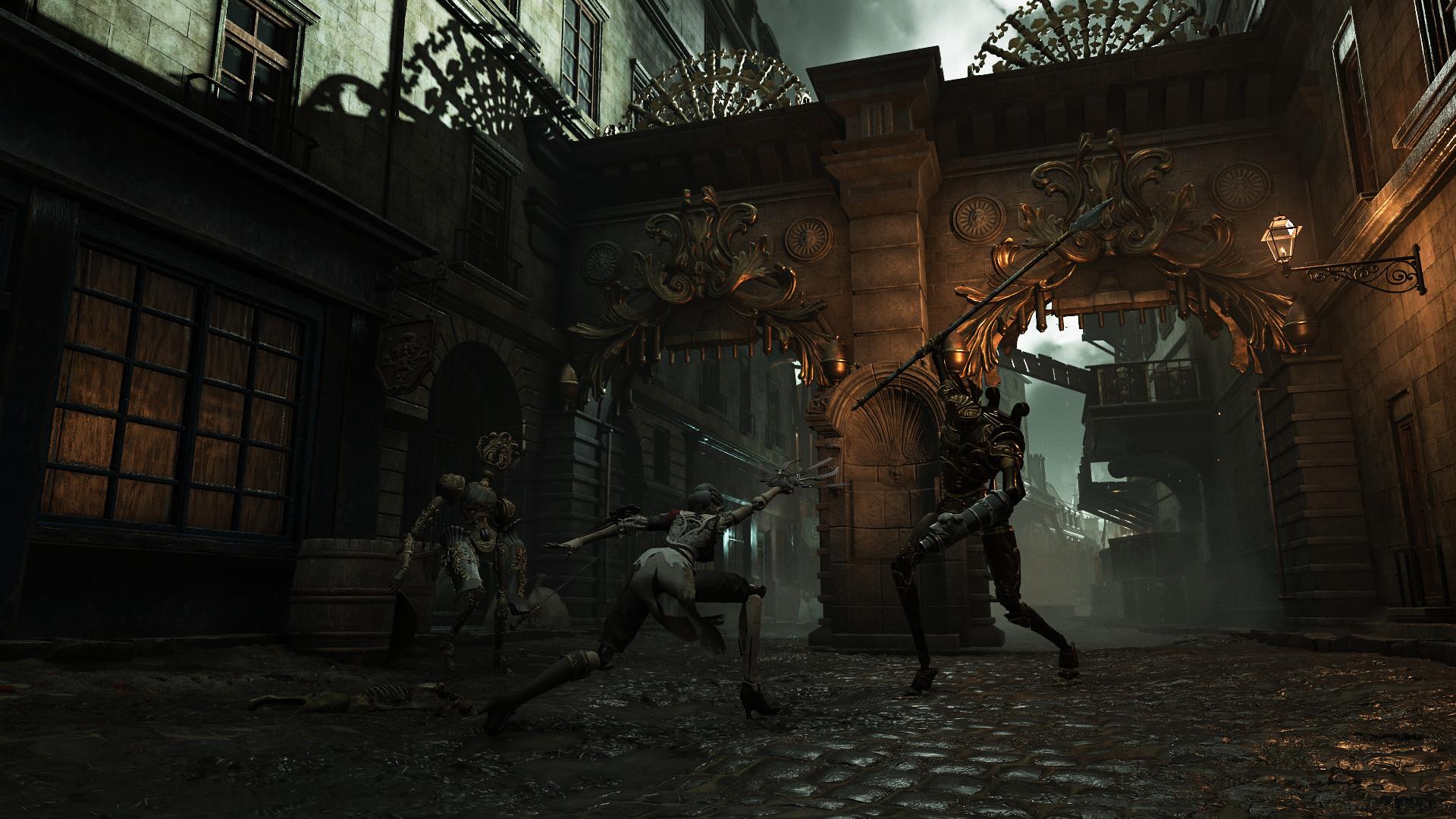 In fact, every boss is categorized like that of a chess board, where you take out the bishops, knights, and rooks first before moving onto the queen. Only after defeating the queen can you checkmate the king. I really admire the developers for choosing to stick with this theme, as not enough games nowadays exude enough originality and creativity. However, just like Greedfall, Steelrising has moments where it becomes evident that this isn’t a AAA-game. Many animations look stiff, while voice lines don’t match up with the lip sync. Although multiple different parts of Paris are visited, many of the levels look identical and copy/pasted visually. It also doesn’t help that the lighting is extremely dark in some areas to the point where it’s very difficult to see what’s on the screen.

There are staple hallmarks to a Soulsborne game and Steelrising hits all the basics. You start with designing Aegis with different hair styles and facial colors and choosing a starting class. There’s your typical bruiser class with more health and a slower weapon, an agile class with lower health but a faster weapon, and a magic elemental based class. You have a light attack, heavy attack, and charged attack, a dodge, a bonfire-like checkpoint, dropped souls upon death, and a stamina based system. Certain weapons have the ability to counterattack or block  but there is no default parry and shield.

Steelrising by no means reinvents the wheel, but does add inspiration from other titles to stand out a bit. You have the ability to jump, so that means you can perform aerial light and heavy attacks too. A fulmination meter builds up from consecutive attacks and allows you to perform a critical hit when filled. There’s a bit of stealth too, but it’s pretty half-baked, considering you can’t crouch to sneak up. By timing a button press, you can regenerate your stamina instantly with the downside of a bit of frost buildup. It’s called “rapid cooling”, and fits quite well into the theme as you overheat from performing too many actions. After all, you are a machine. 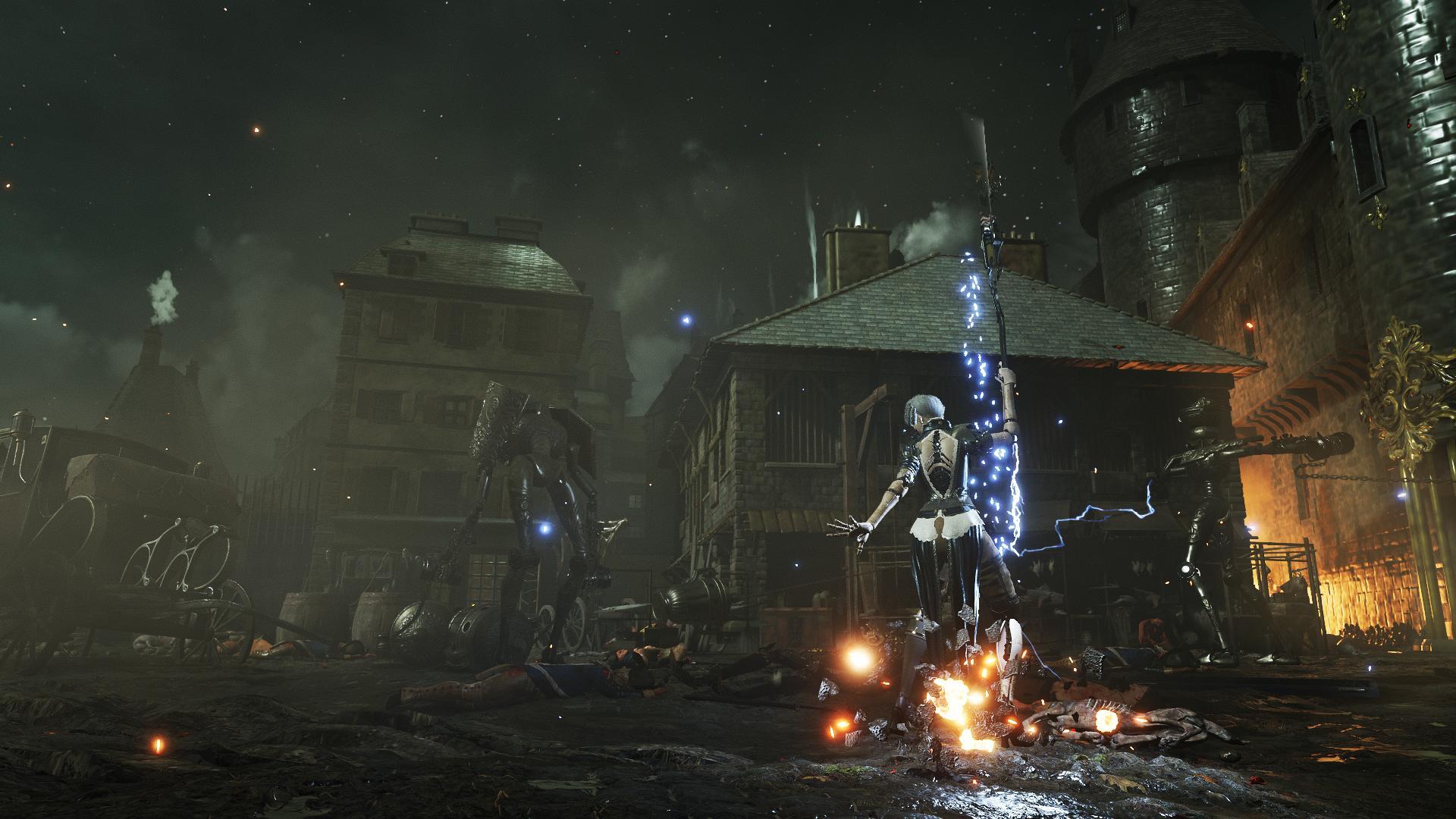 Level layouts throughout the streets of Paris are well designed, and feature large non-linear paths that promote exploration. Scattered collectibles via consumables and lore dump notes can be found along with treasure chests. Metroidvania tools such as a grappling hook and aerial dash are acquired as you progress in the game and allow you to visit previously inaccessible areas. Shortcuts from unlocking gates and doors lead you back to previous checkpoints, much like typical Souls games are designed. You can also pick up side quests from various citizens found hiding in their homes by speaking with them, similar to the premise that was set up in Yharnam from Bloodborne. What is offputting is how sometimes these NPC conversations are voice acted and sometimes they’re not. It’s as if they all should be voice acted (or not), but skipping one line of dialogue sometimes won’t trigger the next. This happened on multiple occasions and ruined any sense of immersion.

All of the aforementioned elements mesh well together for the most part, except for the combat itself. There’s nothing inherently wrong with it, other than the fact that it feels unpolished and janky. There’s no animation canceling and invincibility frames from your dodge don't always line up with an enemy’s attack. This results in combat encounters that end up being a button mash of an attack or dodge. It’s also unfortunate that all of the bosses are gigantic mechanical monstrosities, meaning that all of their attacks are well telegraphed. I was really looking forward to fighting a more mechanically sound fight with someone my own size. Steelrising is a very beginner friendly Soulsborne game because enemies don’t hit too hard and you get insanely overpowered by the end of the game without any grinding for experience needed. So even if you do get hit multiple times, you’ll likely live through it. Use the consumable grenades if you have any trouble because they are insanely powerful. Weapons and enemies definitely need a rebalance as the game is just too easy. 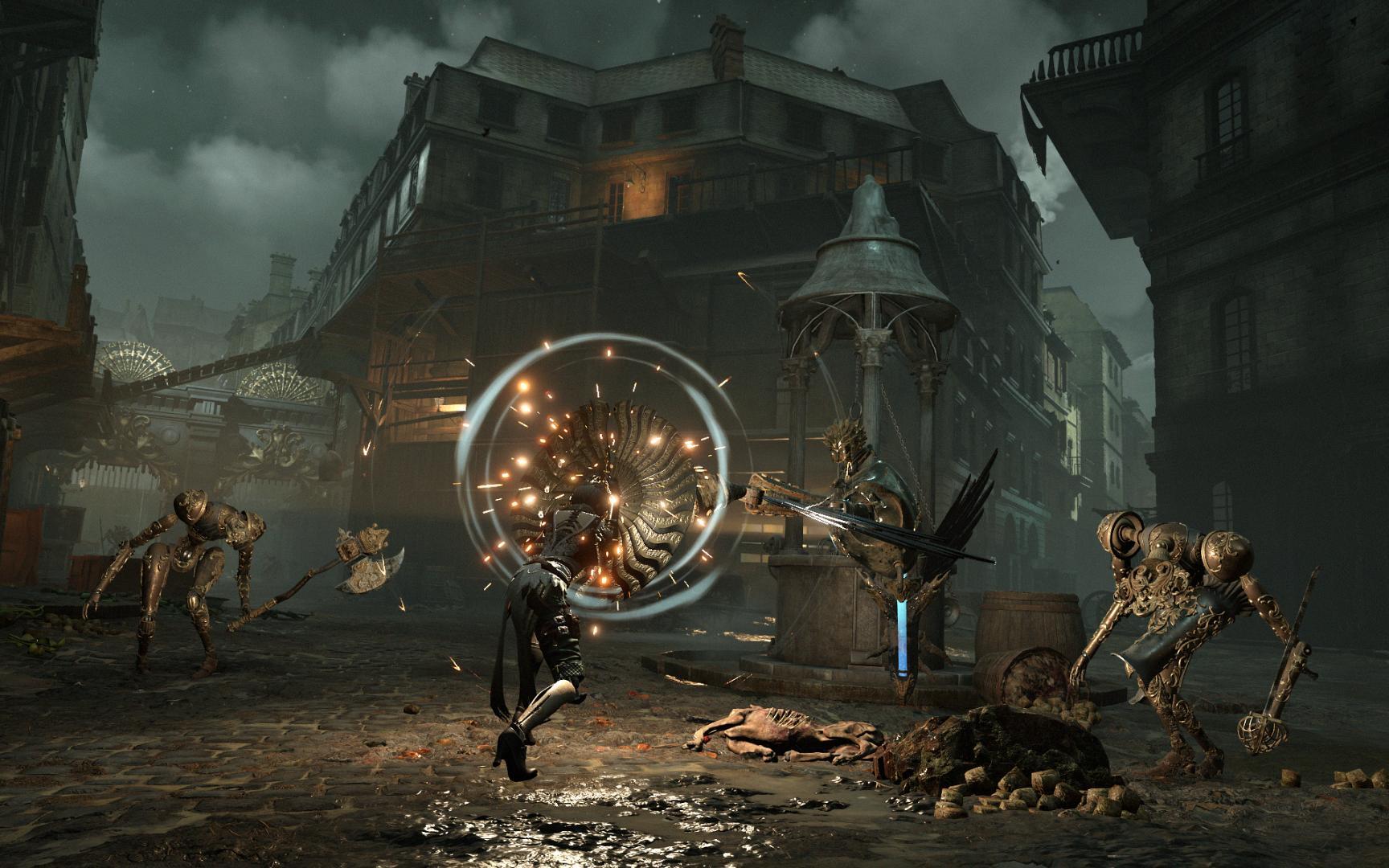 It’s perfectly understandable that Spiders do not have the budget of a AAA studio, but there are a few too many quality of life and performance issues plaguing Steelrising. Many lower budget indie games have more polish than this game has. This review was played on a PlayStation 5 and the game runs at a stable 60 frames per second in some parts, but can drop down to 30 frames per second in others with frequent freezes and stutters. The UI prompt on the screen that allows you to open a door or activate a checkpoint disappeared halfway through my playthrough, with a reboot of the game doing nothing to fix it. I was never sure if I was going the right way considering all doors look the same and most cannot be opened. This is on top of the text size on the heads up display being extremely miniscule, making it near impossible to read unless I sit right in front of the television. But perhaps the biggest mishap that put me over the edge is the fact that my save file essentially became corrupted after beating the game. There’s a prompt that says an extra save file will be created before you face the final boss so you can continue exploring afterwards, but this was completely false. No such file was created and my save file is essentially stuck in an endless loop of rolling credits and kicking me back to the main menu. It’s 2022 and it boggles my mind why games don’t allow you to manually save.

It might seem like I’ve been very critical of Steelrising with its many rough edges, but I still enjoyed my time with it. Spiders did a competent job with their take on a Soulsborne game, but as a fan of the genre who has played countless other renditions, I can’t help but see the glaring flaws in this one.

Steelrising is a beginner friendly entry into the Soulsborne genre with its fairly easy learning curve and enticing alternate history French Revolution premise. The art and visual direction are unparalleled with Spiders’ amazing depiction and design of steampunk automata, but the game is ultimately bottled down by unpolished combat, inconsistent performance, and too many quality of life issues.