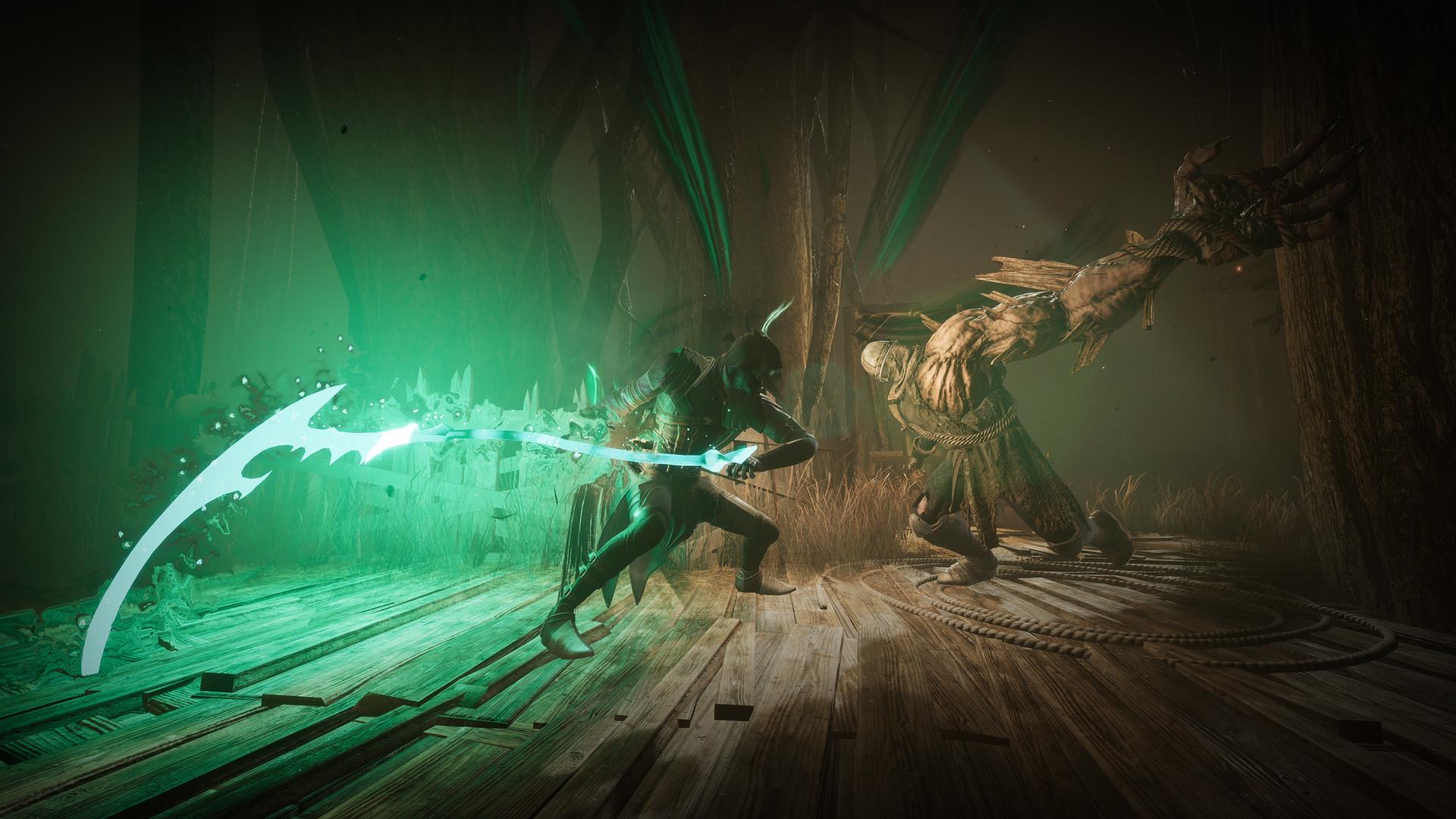 FromSoftware has undoubtedly impacted the gaming industry so much that a new genre of gaming has been born. The word Soulsborne, a mesh of Dark Souls and Bloodborne, has been thrown around so much that virtually every difficult game nowadays is called that. The market is so oversaturated with copycat flavors of FromSoftware games that it is quite difficult for smaller developers to stand out. OverBorder Studio, an indie development company from Taiwan, triumphantly succeeds in getting its foot in the door of the industry with their debut project Thymesia. Instead of choosing to be a Dark Souls clone, which most other games are, it chooses to bask in the success of Bloodborne instead. Thymesia is a brutal third person action role playing game set in a plague ridden kingdom, where you play as an individual named Corvus, as he tries to piece together his forgotten memories.

I’ll be honest. I initially had my hands on experience with Thymesia when I tried the demo for it back in May. My goodness, was it terrible. A major flaw that most Soulsborne games tend to have is the feeling of artificial difficulty. Developers think the meat and bones of creating a game of said genre is to just bump up the enemy difficulty and tune down the player’s power level. All the original games created by FromSoftware are intricately designed to be difficult, but fair. There needs to be a balance of risk and reward in order to make a great Soulsborne game. Thymesia’s demo was the very embodiment of a clone with terrible mechanics and fake difficulty. The dodge mechanic was inconsistent, the enemy hit boxes were atrocious, and the parry system was useless. You could hardly do any damage to enemies, but they can also one-shot you. So much emphasis was put on timing yet the rewards for good timing were little to none. 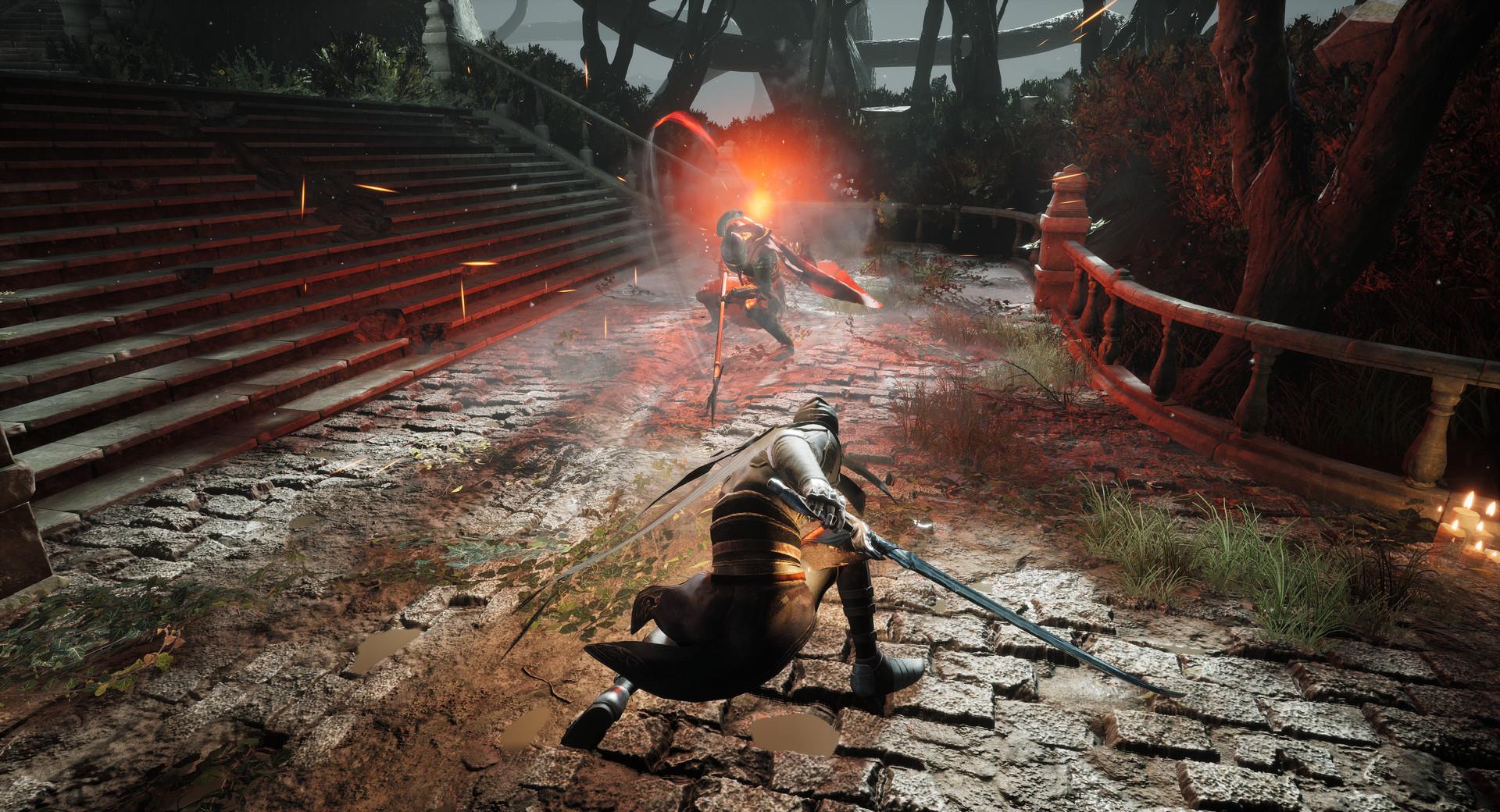 What’s interesting is that Thymesia was actually slated to release back in December 2021 but got delayed into 2022 before the now scheduled August release date. Considering the condition the game was in during the May demo, I can’t bear to imagine how the game would have fared if it had been released during its initial date. Fortunately, the developers took the constructive feedback from players during the demo to further polish and tweak the gameplay and I am glad to say that the game is now in a much better state than it was three months ago. Though the game still contains a considerable amount of jank, Thymesia introduces enough novelty into this oversaturated genre to stake a claim of its own.

Thymesia sure doesn’t shy away from its inspiration from Bloodborne – in fact, it’s been compared to that since its initial announcement. You know the whole drill: rest at bonfire equivalents called beacons, collect souls equivalents called memories to level up, if you die you drop your souls, you have one chance to pick it up again otherwise it is lost forever. The classic formula used time and time again, nothing new here. The beloved “you died” screen is replaced with a hilarious “memory interrupted” screen instead. The dark and dreary atmosphere of Thymesia is surely reminiscent of the Lovecraftian inspired themes of Bloodborne, not to mention a nameless plague that is present in both. I wouldn’t call it plagiarism but some originality in world design would be appreciated, especially in today’s gaming scene. 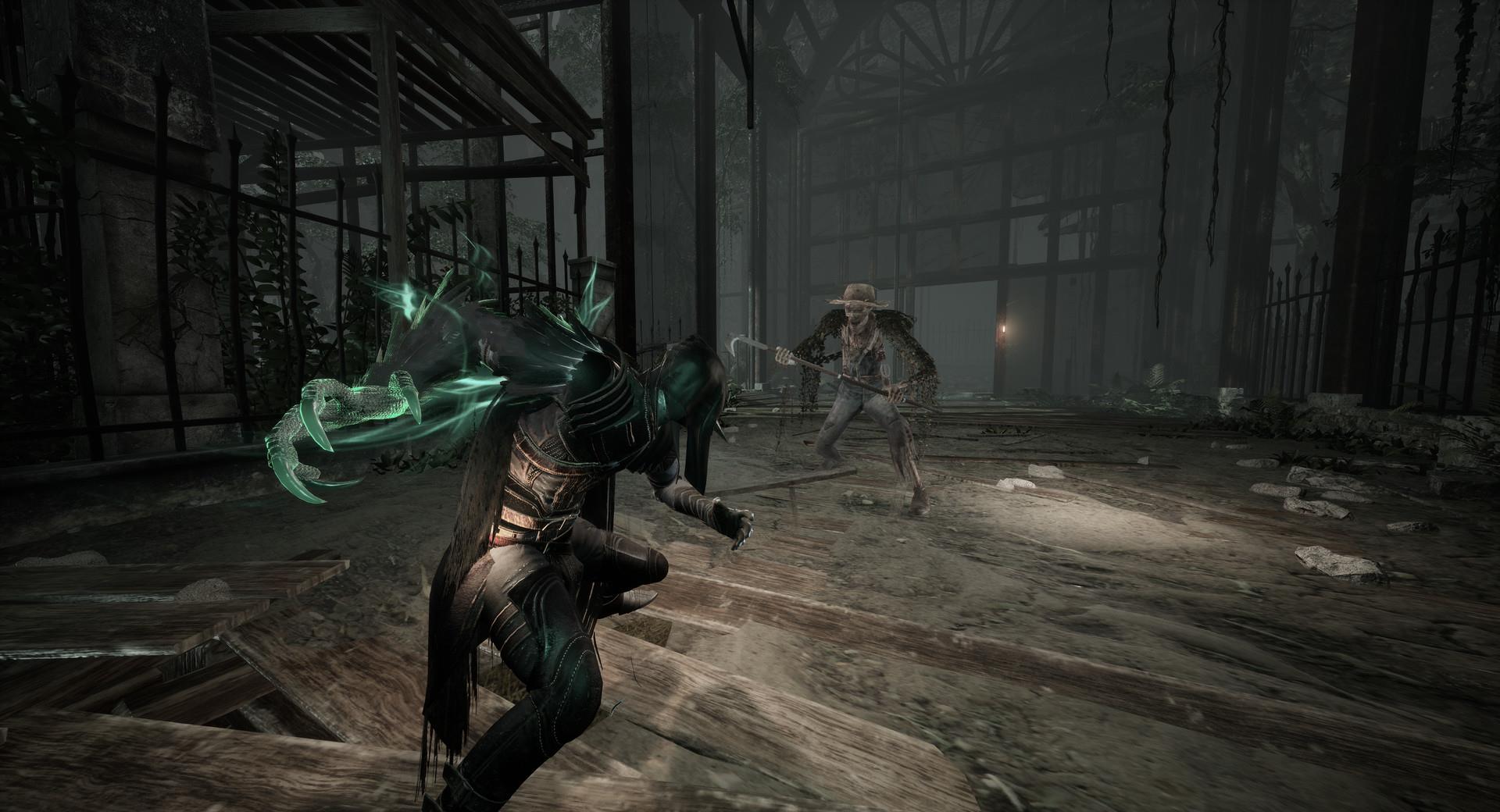 In most FromSoftware titles, the narrative takes a backseat compared to combat, and Thymesia is no different. Some mysterious sickness has befallen the lands and everyone is either in hiding or out hunting infected. Sounds quite similar to Bloodborne right?

You play as Corvus, who has lost all of his memories, and must revisit various locations in order to remember what truly happened. Thymesia isn’t a very lengthy game, featuring only three main locations. One play through took me around ten hours but expect more if you’re a completionist. After clearing a main location, side quests open up but are unfortunately reshuffles of the main location with different areas closed off. A handful of secret and optional bosses are tucked away in these side missions, and are required to achieve the various different endings to the game.

Where Thymesia actually presents something unique is in its approach to combat, and sure enough combat where that originality matters the most. There’s no stamina and no blocking, so don’t even think about using a shield of sorts. Instead, combat can be compared slightly to that of Sekiro: Shadows Die Twice. Instead of blocking, you have a parry functionality, which works as you would expect it to. However, the timing is extremely tight and the rewards are microscopically low to the point where it’s not even worth learning. While the demo’s timing was far worse, the full release’s timing isn’t much better. While most other games allow you to perform a counter attack or riposte if you parry successfully, Thymesia rewards you with the benefit of not taking damage. You do counter a little bit of damage back to the enemy if you parry successfully but it’s so miniscule that it’s barely worth doing. Unlike Sekiro, there’s no stance meter, so unsuccessful parries still result in massive damage taken. The game mitigates this a bit by allowing you to unlock a skill that reduces 60% of damage by holding the parry button, much like a block. Still, you are far better off dodging instead of parrying. 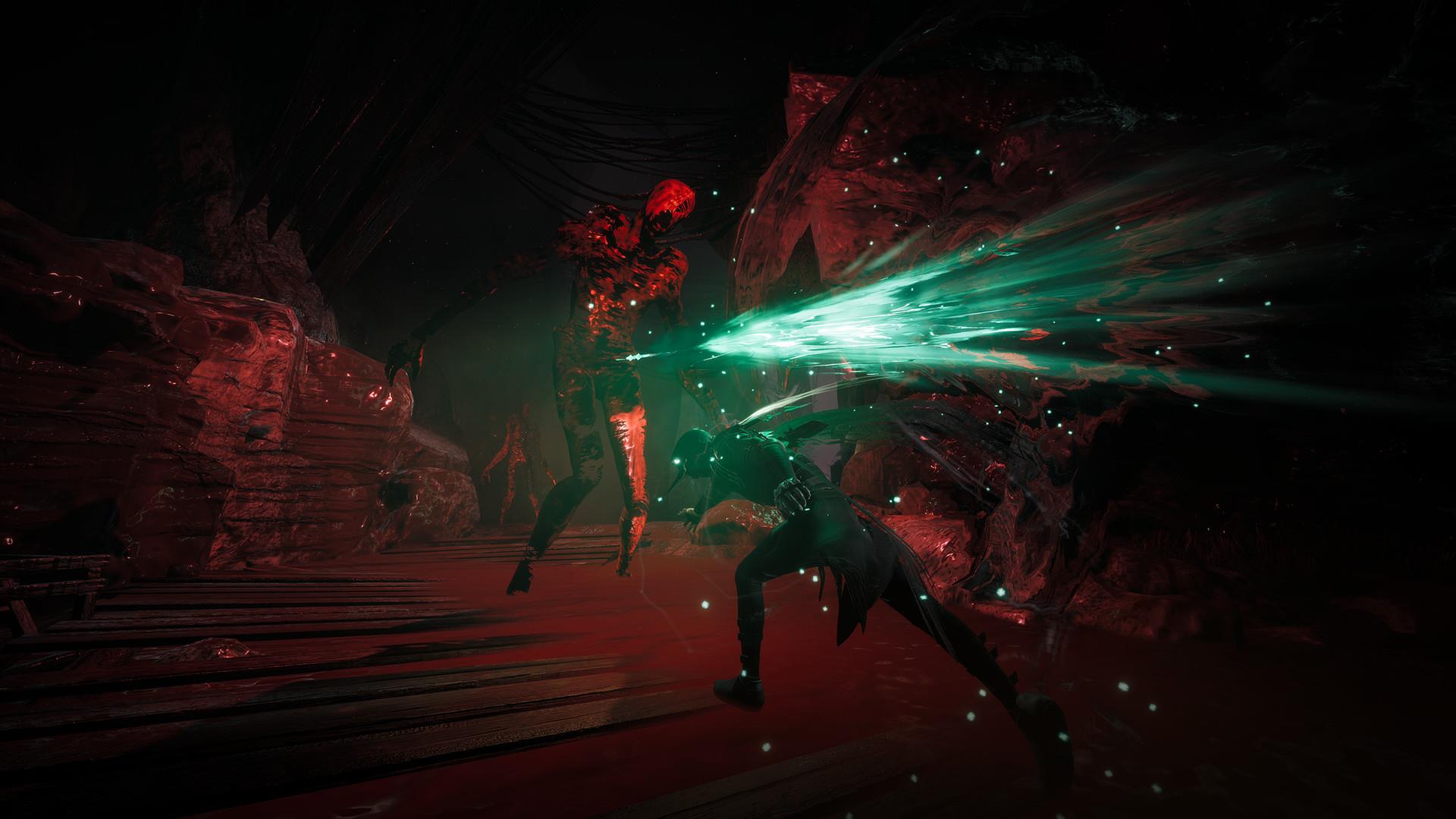 Because there’s no stamina tied to your attacks and dodges, Thymesia promotes aggressive gameplay over defensive. This is further exacerbated by the way enemy health works. There are two types of health bars on enemies, actual health represented in white and wounds represented in green. Using your saber attacks inflicts damage to the white bar, revealing a green bar underneath. If you stop attacking, then the white bar heals up to where the green bar ends. You must use your claw attacks to inflict damage on the green bar, permanently decreasing an enemy’s health. This is an excellent mechanic to promote usage of a multitude of mechanics and systems in order to succeed. There's an extremely small window for error, especially on boss battles, so most of the game’s difficulty comes from this mechanic. Unfortunately though, your own health does not work this way, making you feel cheated by the system. Your health still depletes permanently if you even get tickled by an enemy and you must rely on potions to restore it.

Thymesia actually has a second parry system that’s perhaps even more underwhelming. Enemies glow green when they are about to perform a special attack. These attacks cannot be parried regularly and must either be dodged or parried with a feather. Feathers kind of act like kunai and do some chip damage when thrown. Instead, its main mechanic is to parry and interrupt an enemy right before they execute said green attack. This parry also requires near-perfect timing and rewards you with close to nothing. Again, you are far better off dodging than trying to learn the timing on this one. That being said, there is a skill that increases the parry window at the cost of reduced damage, so there’s some merit to this overall mechanic. 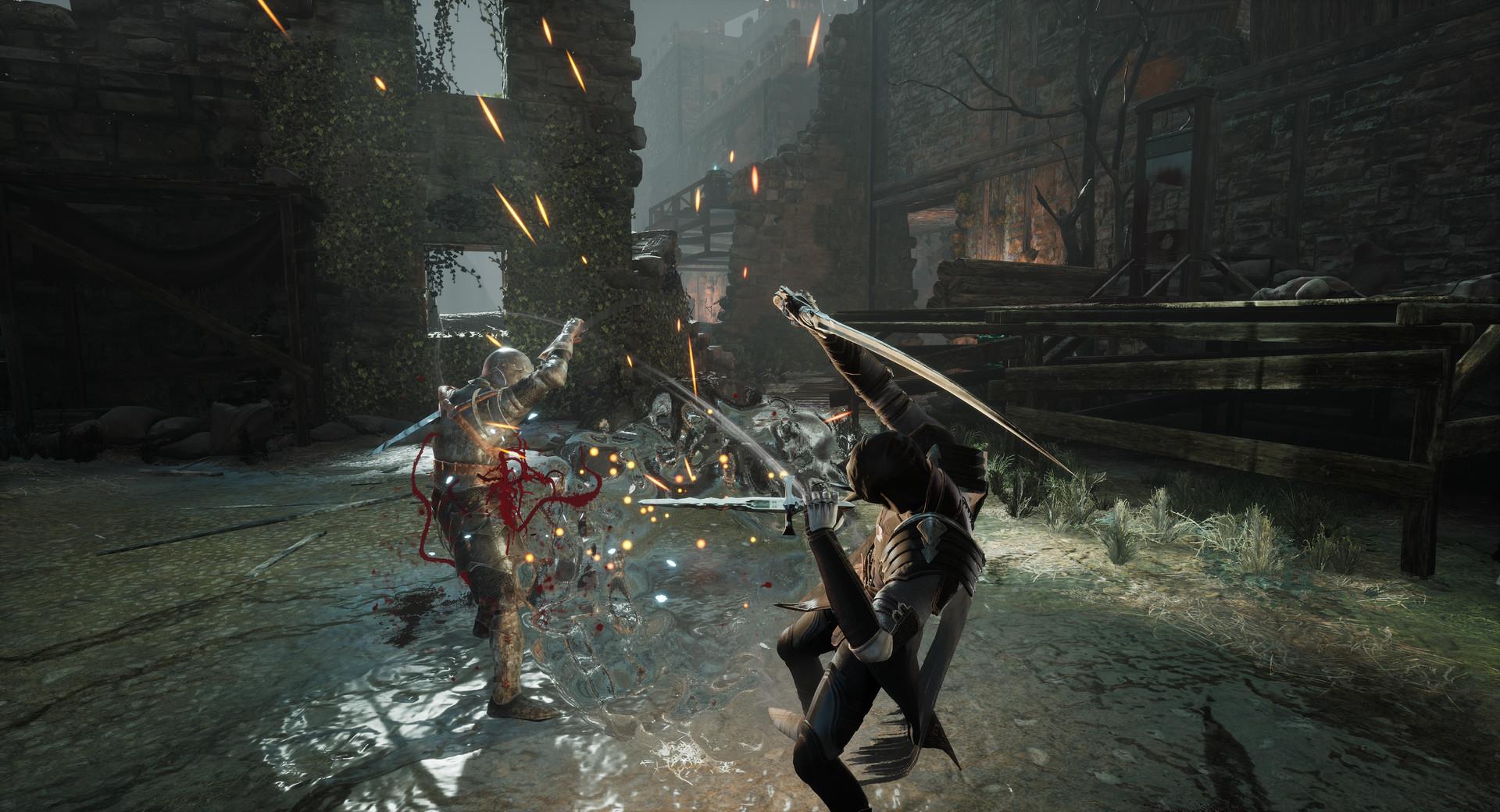 Leveling up is split between three attributes, one that increases saber damage, one that increases claw damage, and one that increases your health. It’s very simple to understand and a stripped down version of the various different confusing attributes you would expect from a FromSoftware game. Every time you level up, you gain a skill point that you can use to allocate in a multitude of trees. These vary from upgrading your dodge to recovering health from executing enemies. Depending on skill allocations, playstyles differ. I appreciate the fact that you can refund these points at any checkpoint with no consequence. This really promotes experimentation and trying out new ways to approach combat.

Perhaps where Thymesia shines the brightest is its introduction of the plague weapon system. Along your journey, you start to gain access to a multitude of weapons from the enemies you defeat. These range from spears and shields to scythes and dual blades. There are two ways to use these weapons. Droppable weapon shards can be used to permanently unlock a plague weapon for you to use at the expense of a cooldown timer and mana (called energy in this game). The other way is to reave these weapons by holding down the claw attack. This allows you to temporarily use the reaved weapon one time before you have to reave again from a different enemy. This mechanic further adds to the complexity and aggression of combat, allowing you to mix and match different weapons to your liking. 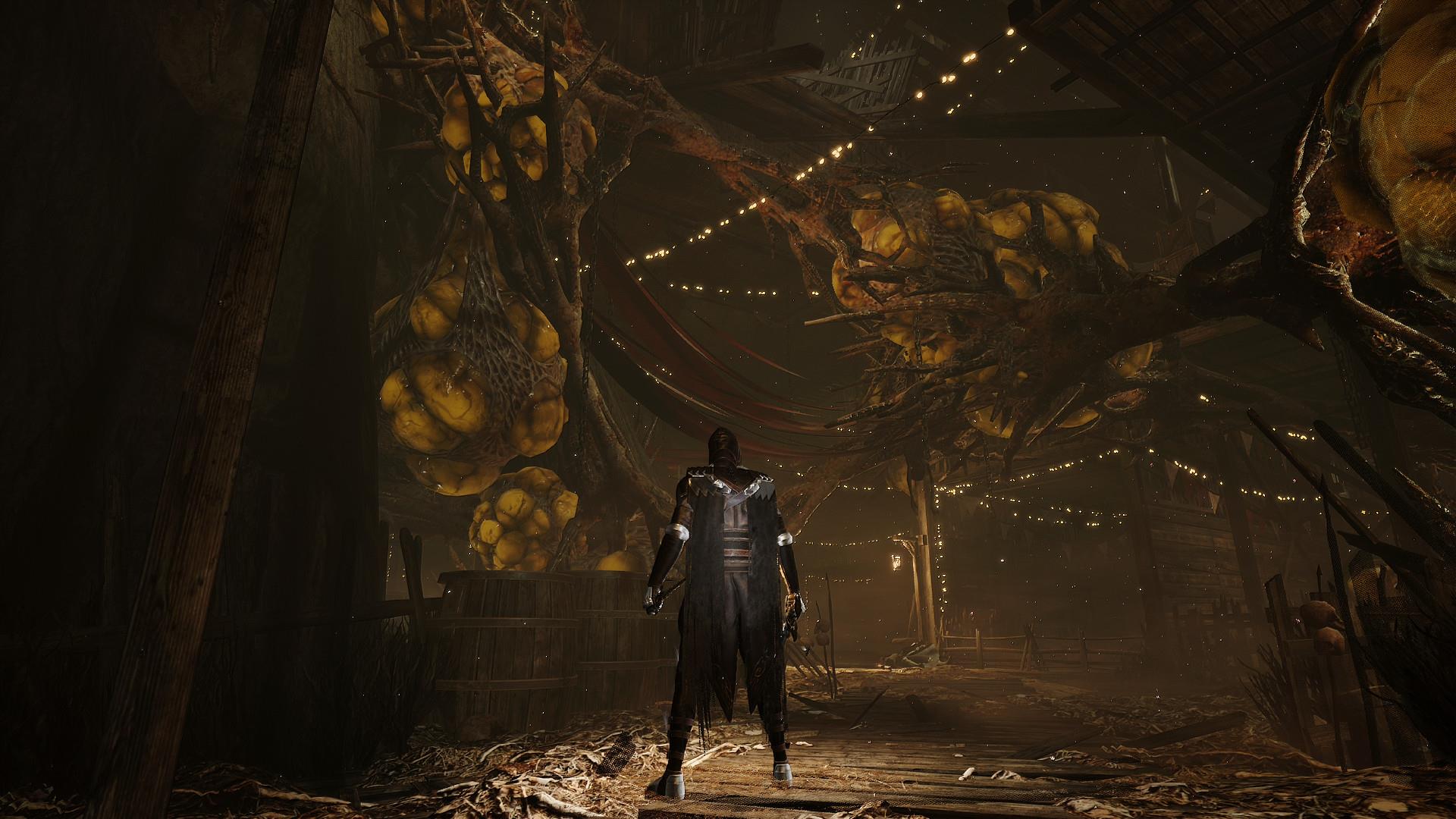 Thymesia was actually going to be exclusive to the PC at its announcement but I’m glad it’s also coming to PlayStation 5 and Xbox Series S|X for more players to enjoy. However, performance has hiccups with frequent frame drops and screen freezes. The animations aren’t smooth at all sometimes and there are clipping issues present when you interact with the environment. On top of all of this, there’s no voice acting and everything is read through text. These are merely minor gripes though, as nothing was too detrimental to the overall gameplay itself.

Thymesia is a competent third person role playing game that follows in suite to its inspirations, Dark Souls and Bloodborne. Given that it’s a low budget indie game, expect a certain degree of jankiness and clunkiness to the combat and gameplay. Nonetheless, it’s commendable that the developers took the feedback from the initial demo to improve on its shortcomings. There’s still lots of polishing to be done on this game but I have no doubt that the developers are able to achieve it. The risk and reward system revolving the parries need a heavy overhaul but the plague weapon system and dual health mechanic bring a novel twist on what otherwise is an overused formula.

Thymesia is a game that I expected to flop so hard given my initial impressions of the demo. But I am happy to say that the full release is much more polished and fleshed out thanks to OverBorder Studio diligently taking in the feedback of the players. Out of a sea of Soulsborne clones, it exudes just enough flavor to stand out thanks to the aggressive combat loop, robust plague weapon system, and dual health mechanic. Still, the two parry options, which require near perfect timing yet give little to no reward, need a complete rework. But hey, it’s a janky and clunky love letter to its big brother Bloodborne.