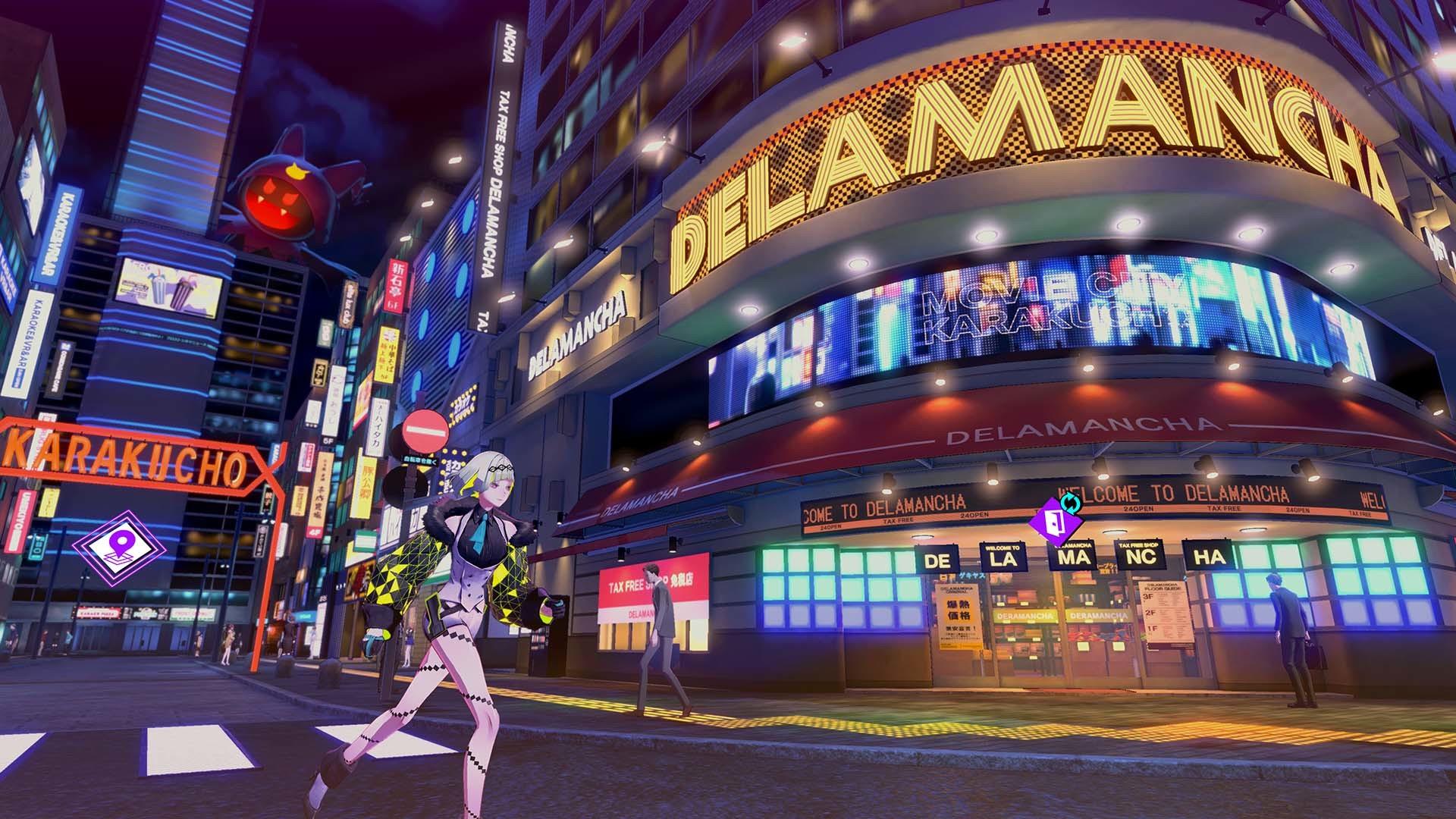 Shin Megami Tensei: Devil Summoner: Soul Hackers is a spin-off title of the mainline Megami Tensei games that were developed by Atlus back in 1997 for the Sega Saturn. It was later ported to the PlayStation 1 in 1999 and the Nintendo 3DS in 2012. The Devil Summoner spin-off series has largely been overshadowed by the mainline titles as well as the Persona series, and never gained much traction in the West. However, twenty-five years after the initial game’s release, the sequel is finally here, to the surprise of many newcomers and veteran fans alike. Soul Hackers 2, dropping the whole appended Shin Megami Tensei: Devil Summoner prefix (because that’s just a mouthful), is a Japanese turn-based role playing game featuring a brand new standalone story set in a futuristic sci-fi cyberpunk society that brings just enough of its own creativity to set itself apart from its inspirations.

You play as Ringo, an intelligent AI being born from an omnipotent super-intelligent entity known as Aion. Born alongside you is your partner Figue, who serves as a secondary but pivotal character in the overall narrative. Aion has predicted the end of the world, and has tasked you with averting the dire fate of mankind by saving the lives of two individuals who are both anticipated to die. Soul Hackers 2 takes place in a retro-future version of Japan where demons exist alongside humans, much like the relationship between creatures and humans in Pokemon. Humans capture and summon demons to fight beside them using a COMP device, hence the series name: Devil Summoner. The lives of three unrelated devil summoners, Arrow, Milady, and Saizo, intertwine after they’re recruited by Ringo and Figue. All three summoners, previously killed, are brought back to life by Ringo via a process known as Soul Hacking, hence the game’s name. You soon discover that a mysterious man known as Iron Mask is carrying out these murders in search for a powerful source known as Covenants that live inside human souls. It’s a genuinely engaging story that features an excellent Japanese and English voice cast accompanied by a fittingly bopping electric soundtrack. 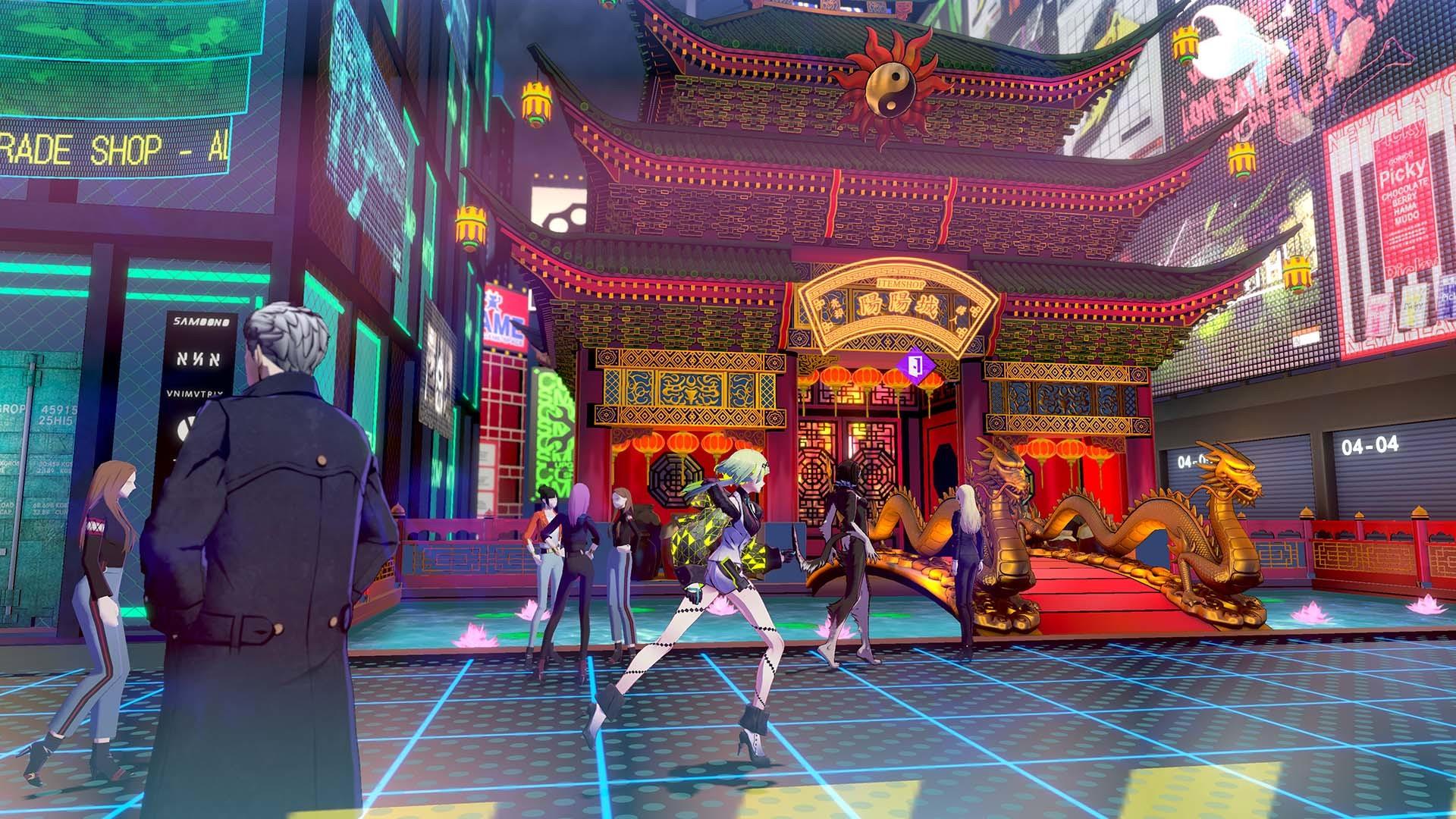 Fans of the Shin Megami Tensei series will feel right at home with the enticing narrative, dungeon exploration, gear upgrading, turn-based combat, demon negotiation, and demon fusion, among other staples of the franchise. However, Soul Hackers 2 is probably the best entry point for newcomers as it does not require any knowledge of previous franchise entries, and also takes on a more beginner-friendly approach to the Megami Tensei formula.

Demon negotiation served as an extremely frustrating pain point in many of the previous titles. The entire system came off as random and unintuitive, commonly forcing you to enter a trial and error scenario in order to get a demon to join your cause. I’m happy to say that Soul Hackers 2 alleviates this by guaranteeing demons to join your party as long as you fulfill their demand, whether that be taking your money or a random item. No longer will you have to feel robbed of your resources while the demon runs away with them. At the start of a dungeon, your party’s demons are sent on reconnaissance to scour the nooks and crannies. They can provide you with a free heal, useful consumables, and money, but most importantly, new demons to recruit. The only frustrating mechanic that I encountered was demons refusing to join my team simply because my level was too low. There were no requests I could fulfill other than grinding for experience points in optional dungeons in order to level up. 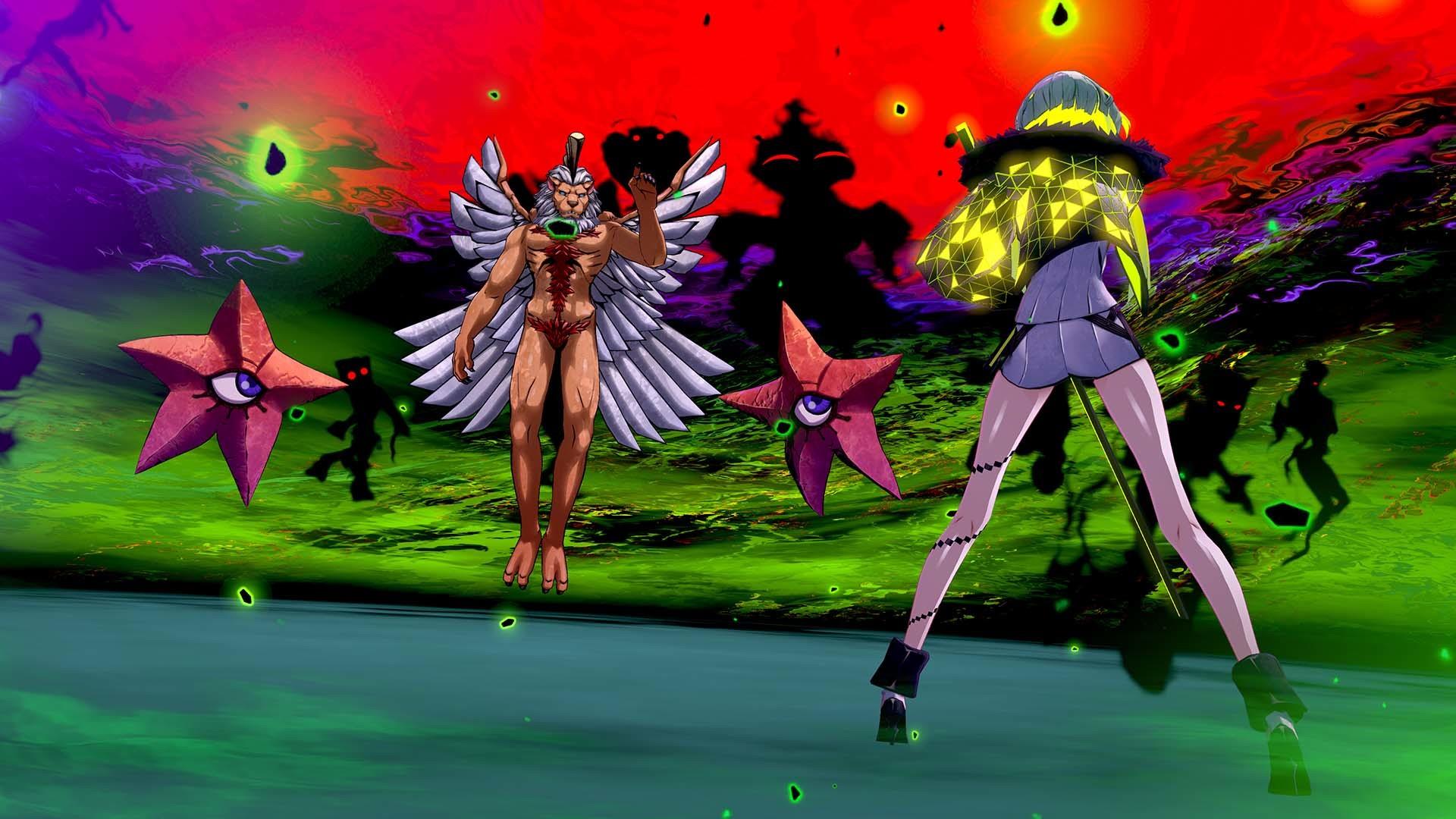 Shin Megami Tensei games are also known to be notoriously difficult, to the point where some deem them as the “Dark Souls” of Japanese role playing games. You often find yourself in situations where enemies have the ability to completely wipe out your party in one move. Though this can still happen in Soul Hackers 2 if you enter a battle unprepared, the game takes a more accessible approach, giving you the option of three difficulty levels: easy, normal, and hard. There’s even a new game plus mode that offers even more replayability. A “very hard” mode is coming as downloadable content at no extra cost for those looking for an extra challenge. Easy mode allows you to revive your party an infinite number of times, and is especially helpful for those who are unfamiliar with the combat mechanics. It’s nice to see Atlus making games more accessible for people, both in terms of gameplay and platform availability. This is the first time a Shin Megami Tensei game is launching on PC, PlayStation, and Xbox. Unfortunately, the game does force you to partake in side quests or optional dungeons, as you quickly become underleveled if you only progress the main story. Demons will refuse to join your cause and bosses will quickly wipe out your entire team.

Soul Hackers 2 strays away from the familiar Press Turn Combat System, where you can earn extra attacks or lose them if you hit an enemy weak or resist spot. Instead, characters take turns by either using physical attacks or elemental skills to exploit enemy weaknesses. Every successful exploit grants one stack of a “Sabbath” skill, which is an all out extra attack dealt on all enemies at the end of your turn. Certain demons also have special Sabbath skills that might be executed during battle. It’s important to note that enemies do not have access to the above skill if they exploit your weak spots, ultimately making the combat system in Soul Hackers 2 far less punishing than its predecessors. 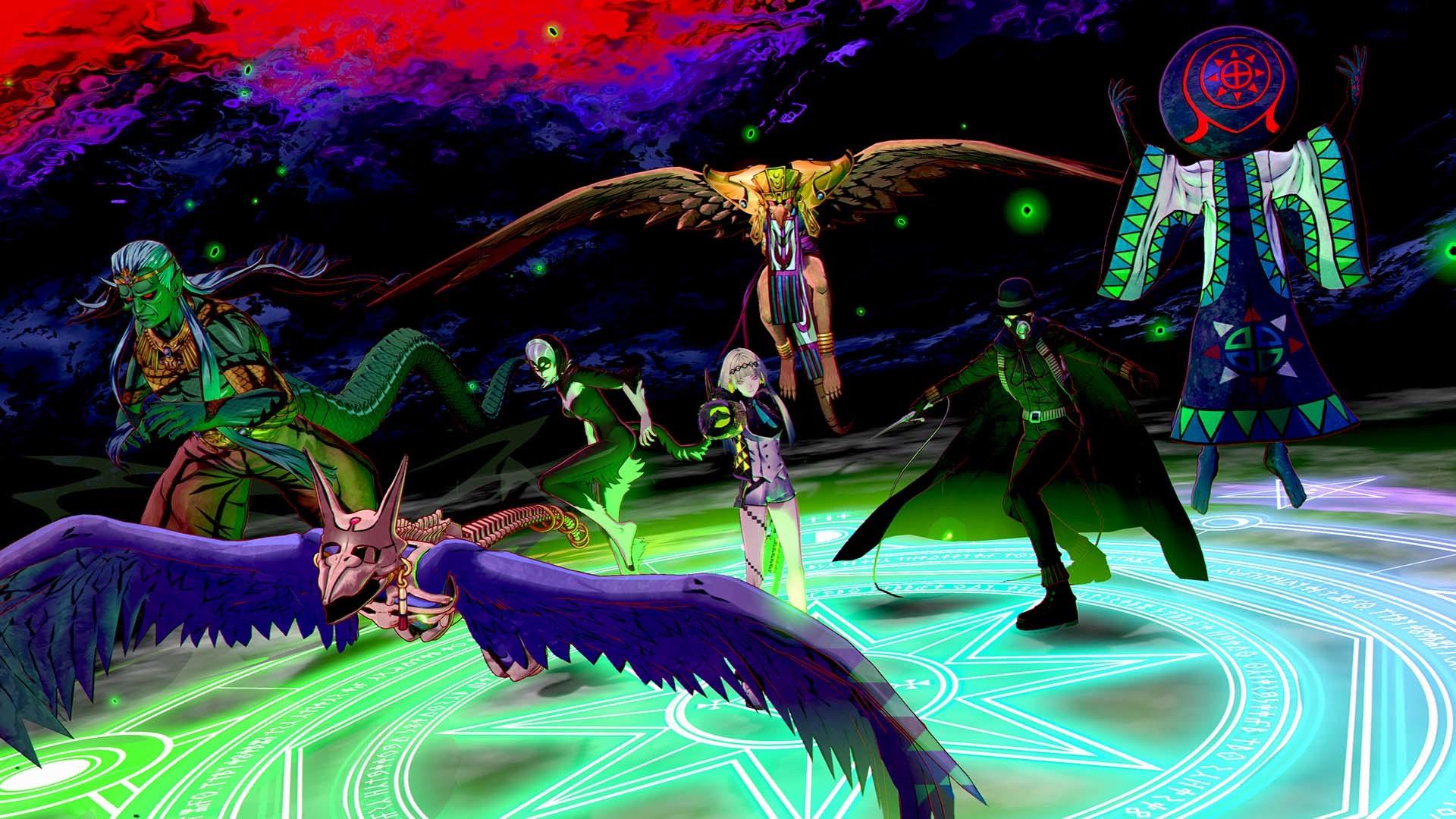 Outside of combat, you can partake in a wide array of social simulation activities with your party members, similar to mechanics found in Persona. These range from cooking meals with your friends to grabbing a drink with them at the local bar. Through time and effort, you really get to gain a better understanding of your party members while increasing your affinity with them. It’s a shame that these bond episodes are mostly presented in a visual novel style, through text boxes. These sections are also not voice acted, aside from the occasional anime grunting, so expect to be reading a lot. There is a Soul Level associated with each party member, and increasing it allows you to enter deeper into a dungeon known as the Soul Matrix. Every character, other than Ringo, has a Soul Matrix, which features unique enemies and equipment not found in the outside world. Every matrix reveals more about a character’s backstory, and rewards you with permanent skills and abilities. All in all, it’s an immersive blend of narrative building and combat, and a unique standout feature of the game.

This is the first time Atlus has brought one of their games natively on next-gen hardware, and boy does it rule. Playing Soul Hackers 2 via performance mode on the PlayStation 5 feels buttery smooth. The game runs at a steady 60 frames per second while retaining excellent graphical fidelity. Character and demon models are crisply detailed, and the cyberpunk rendition of Japan is beautifully drenched in neon color palettes. It’s an absolute shame that most of the dungeons are drab copy pasted assets of never ending corridors and empty hallways. Generic looking robot entities don’t make things better by randomly spawning in the aforementioned dungeons. It’s 2022, and we’ve seen Pokemon step it up by displaying the actual creature in the overworld before initiating combat. I would like to see Atlus follow suit by replacing these colorless blobs with the actual renditions of the demons I’m fighting. 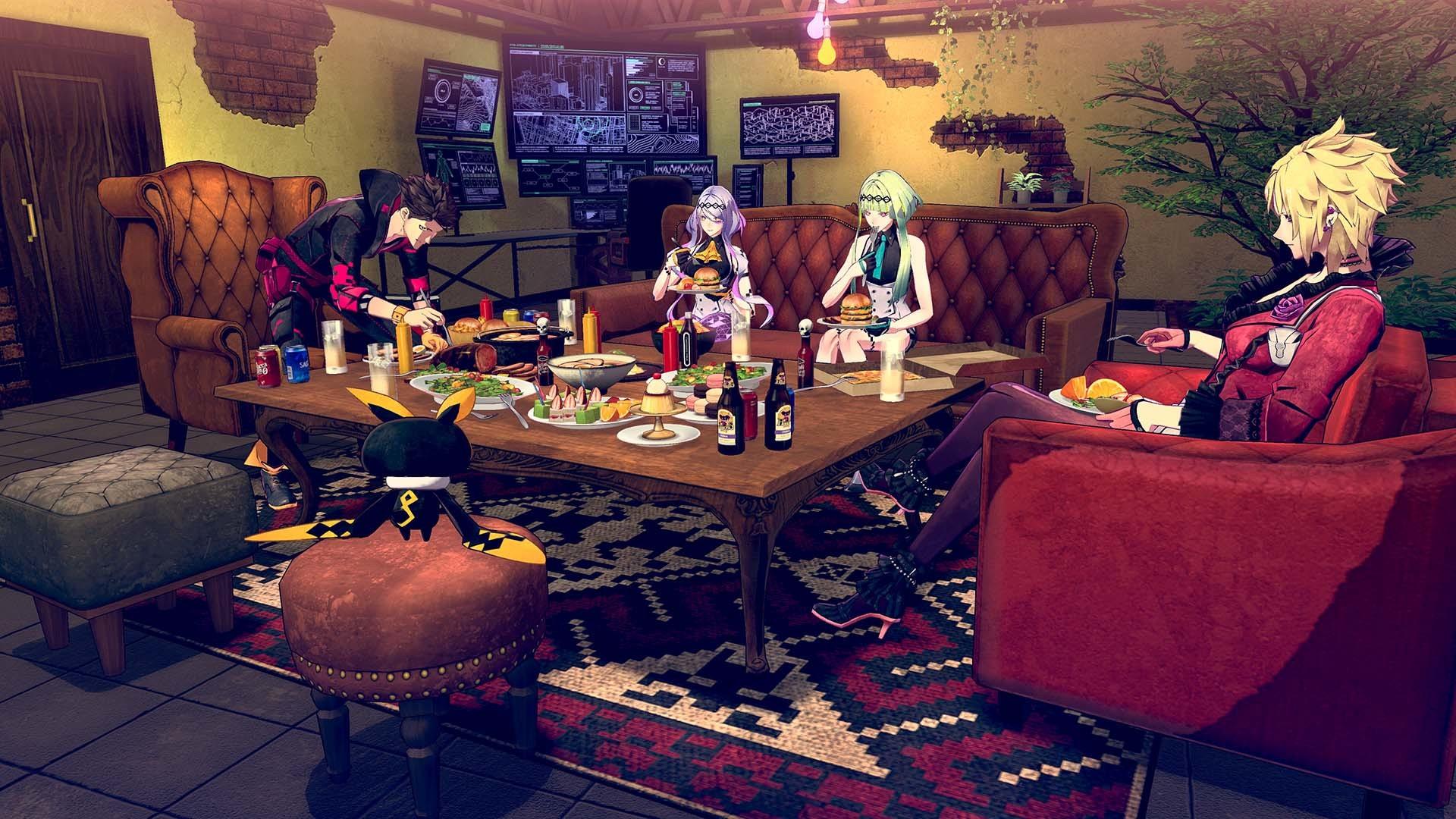 Atlus has created a game that manages to retain the difficulty of the mainline Shin Megami Tensei games and the social link elements of the Persona games, while introducing some interesting twists on pre-existing gameplay mechanics. The narrative is engaging, the world building and art direction are alluring, and the frustrating demon negotiation mechanic is finally alleviated! Soul Hackers 2 doesn’t reinvent the wheel when it comes to JRPGs, but it’s opening its doors wide open for newcomers to check out.

Soul Hackers 2 feels like a culmination of everything Atlus learned from previous iterations of its games. It’s beginner friendly enough for newcomers to join but also brings just enough challenge to entice veterans of the series. It leaves a unique mark with some genuinely creative mechanics while retaining core elements of Persona and Shin Megami Tensei, but is bogged down by some poor design choices. Painted in a fresh neon coat of cyberpunk and drenched in a deeply wrapped narrative, Soul Hackers 2 still deserves the attention of any JRPG fan.