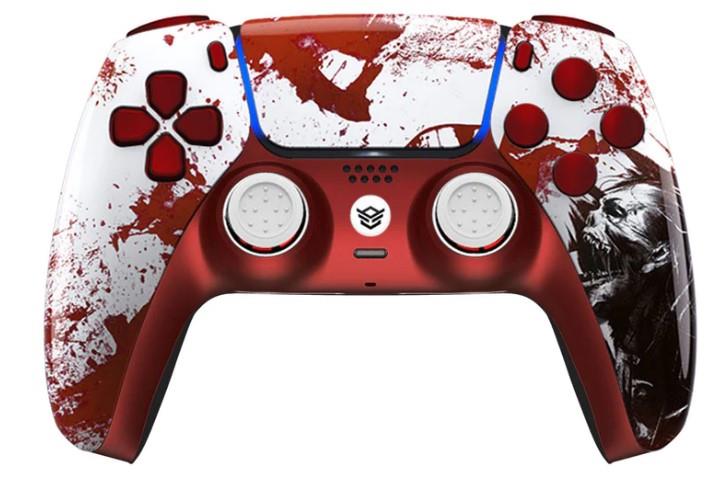 My first thought when I unboxed the Hexgaming Rival Pro Ultimate controller was “Oh my God, this is so cool looking.” The controller in my possession is the “Blood Zombie” model, and it is one of the slickest pieces of tech I’ve laid eyes on in quite some time. It’s almost as though Hexgaming reached across time and space to try to determine which controller I would love the most, peered deep into my soul, and decreed “Send him the zombie.”

The controller has a base of metallic, maroonish-red paint, which is the same coloring and texture as the D-pad, face buttons, and triggers. The front of the hand grips and the touchpad are glossy, with the coolest artwork I have seen on a controller. The background of the piece is stark white, but brilliant red blood splatters coat the surface, with a hand-drawn zombie image on the right-hand grip. The analog sticks and home button are the same bright white. It is simply the coolest damn thing. 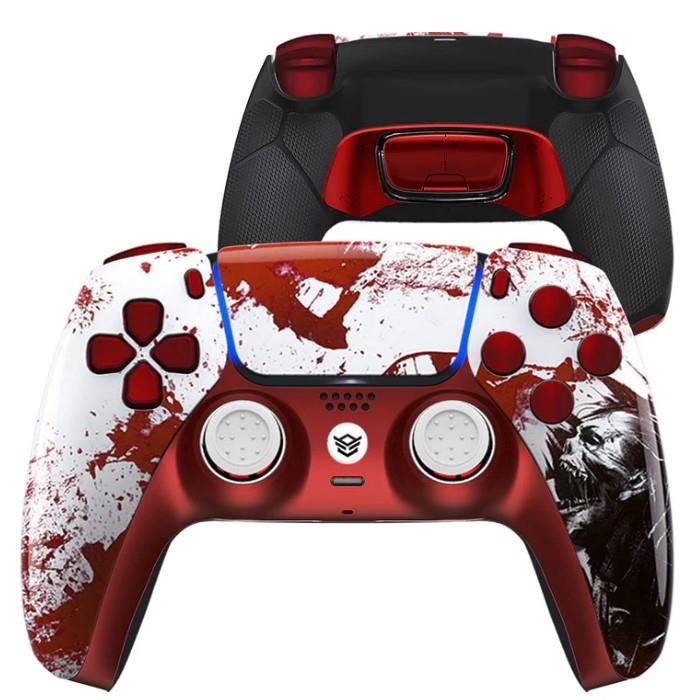 Hexgaming Pro Controllers are interesting because they aren’t trying to reinvent the wheel. They are simply looking at the wheel and saying “How can we make this wheel faster?”. So the guts of the Hexgaming Pros are actual PS5 DualSense controllers, deconstructed and put in a new shell. I imagine that a part of the rather significant cost of these controllers is carry over from those not-very-cheap DualSenses. The rest of the cost is from the very heavy modding that was done, one by one, to make these controllers as appealing as possible to a certain subset of gamer. These DualSense controllers have been Frankensteined into something very different indeed.

Make no mistake about it – this is an eSports controller. Despite the cool zombie design, you aren’t going to be playing Resident Evil or Dying Light with this thing. This is a controller that is optimized for a certain type of gameplay, and it sacrifices some of the more touted features of a DualSense in order to achieve them.

The biggest difference casual gamers will immediately notice is the range on the L2 and R2 triggers. The normal range for these triggers is 7MM – and as PS5 fans know, in the DualSense controller, they are reactive. The triggers can push back on you, even allowing different functions depending on how much pressure you put on them. Returnal, for example, has two functions mapped to a single trigger, one which fires off when you push the trigger halfway. 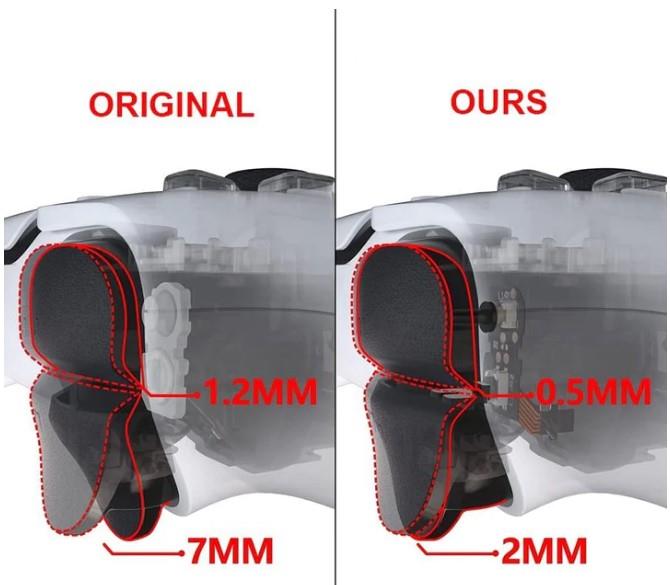 That feature is gone on this controller. The 7MM range players typically have to push through to fire a gun has been mechanically reduced to 2MM, which does wonders for twitch gamers who just want to shoot very fast. It is stunning how quickly you can fire off a full clip just by kinda vibrating your finger on the trigger.

But yes, you lose something in the trade – the adaptive nature of the DualSense Controller triggers. I played Saints Row with this controller for a while, which was an interesting experience. I loved the improvements to the shooting, but driving was an absolute nightmare. Due to the reduced range of the trigger, I was either sitting still or jamming the gas all the way down. Bottom line: this controller is for very specific games, and it should not be considered as a full replacement for a DualSense. That’s just not what this is.

This is a controller for eSports shooter gamers – those that want to be seriously competitive in games like Fortnite, Call of Duty, Apex Legends, and Rainbow Six. Players can switch out the analog sticks at will; they simply pop off the controller and can be replaced by a variety of six convex and concave sticks that come in various lengths. An explanation for laymen - having a longer stick on the right analog station helps immensely with fine-tuning your aim in shooters. 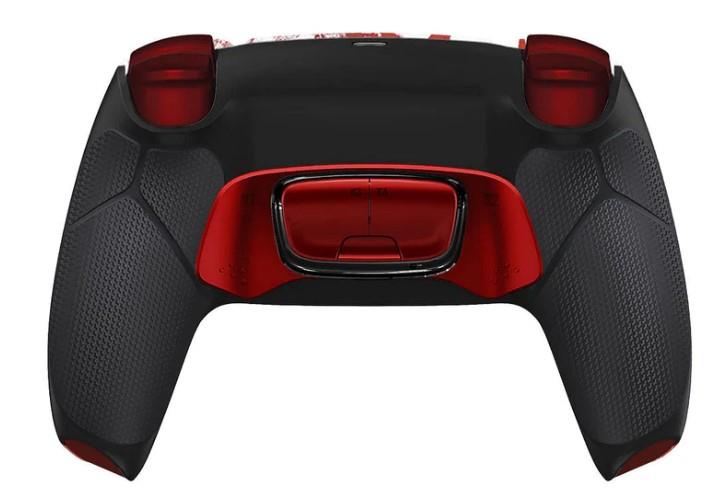 The other headline feature is the programmable buttons on the back of the controller. With the simple tap of a button, the player can map any of the face buttons to four very responsive buttons, marked K1, K2, K3, and K4. Why, you ask, would a controller with eight buttons need four more? Well, it’s all about the placement.

If one is playing a shooter, one must take their thumb off of the right analog stick to tap the Square button to reload, leaving them – for a short but measurable time – unable to aim. Mapping that button to the back allows that shooter player to reload using one of their useless, vestigial fingers that normally hang out like dead weight at the back of a controller. It’s a small advantage, but a real one. 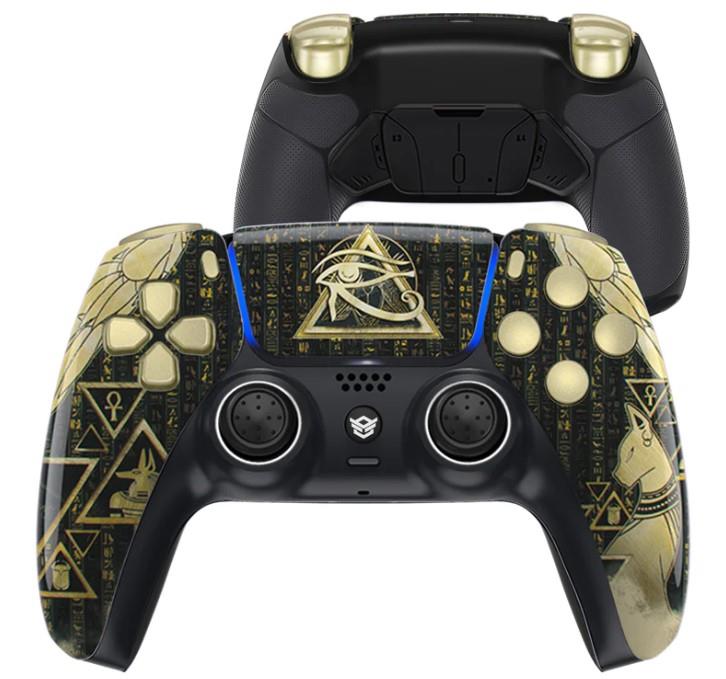 In fact, all of these advantages might seem small to gamers that don’t play competitively, but together they add up to a pretty significant gain in performance. And if performance is what you are looking for, then the $289 for this controller is a small price to pay.

As a more deliberate gamer that shies away from competitive shooters, I'm admittedly not the primary audience for the Hexgaming Pro. For perspective from a player that would love to have a controller like this in their arsenal, I turned to Aidan, my 22-year-old son. Aidan grew up on a steady diet of Call of Duty and Battlefield, and plays at a semi-pro level in Smite. He is the most gamer-ass-gamer I know, and he kept stealing the Hexgaming Pro Ultimate from the living room PlayStation where I was testing it to ferret it away up in his bedroom setup. Finally I asked him what was up. 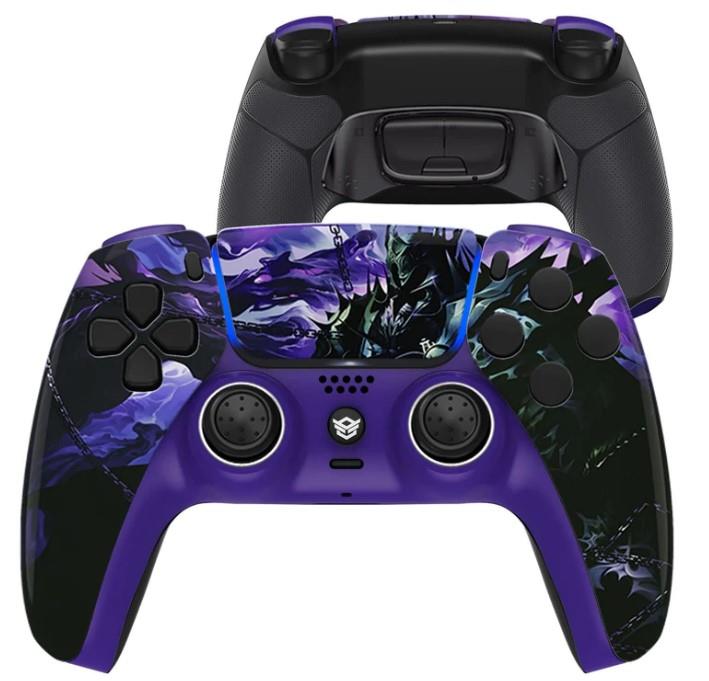 “This controller has every janky homemade mod that I made to Xbox 360 and PS4 controllers built right into it by professionals.” Growing up, Aidan was notorious for chewing up the analog sticks on his PS4 controller by slapping cheapo GameStop extenders onto them. There was talk of putting pennies somehow into the triggers of those controllers to shorten the pull needed to shoot. And as for the back buttons, well, he “just learned to contort my finger to the front of the controller so I don’t have to take my thumb off the stick.”

While Aidan agrees that the Hexgaming Pro Ultimate is not going to work for everything – “Yeah, it’s not so great for racing games” (which to be fair, is stated right on the Hexgaming website) – he pronounces it “the best he has ever seen” for anything involving shooting. He has been using it to play Destiny, Smite, and Rainbow Six Siege, and I suspect he has been showing it off to his friends as a bit of a flex. It is mighty pretty.

It should be noted that while I’m using a Pro Ultimate controller, with every feature available from Hexgaming, players can “make their own” controller on the Hexgaming website, picking an choosing which features they want to include. So, if those FastShot triggers aren’t for you, it is possible to design a Hexgaming controller custom to your own needs. You can change the color on everything, and create your own wild-looking creation. It’s actually a pretty fun little interface to mess around with. 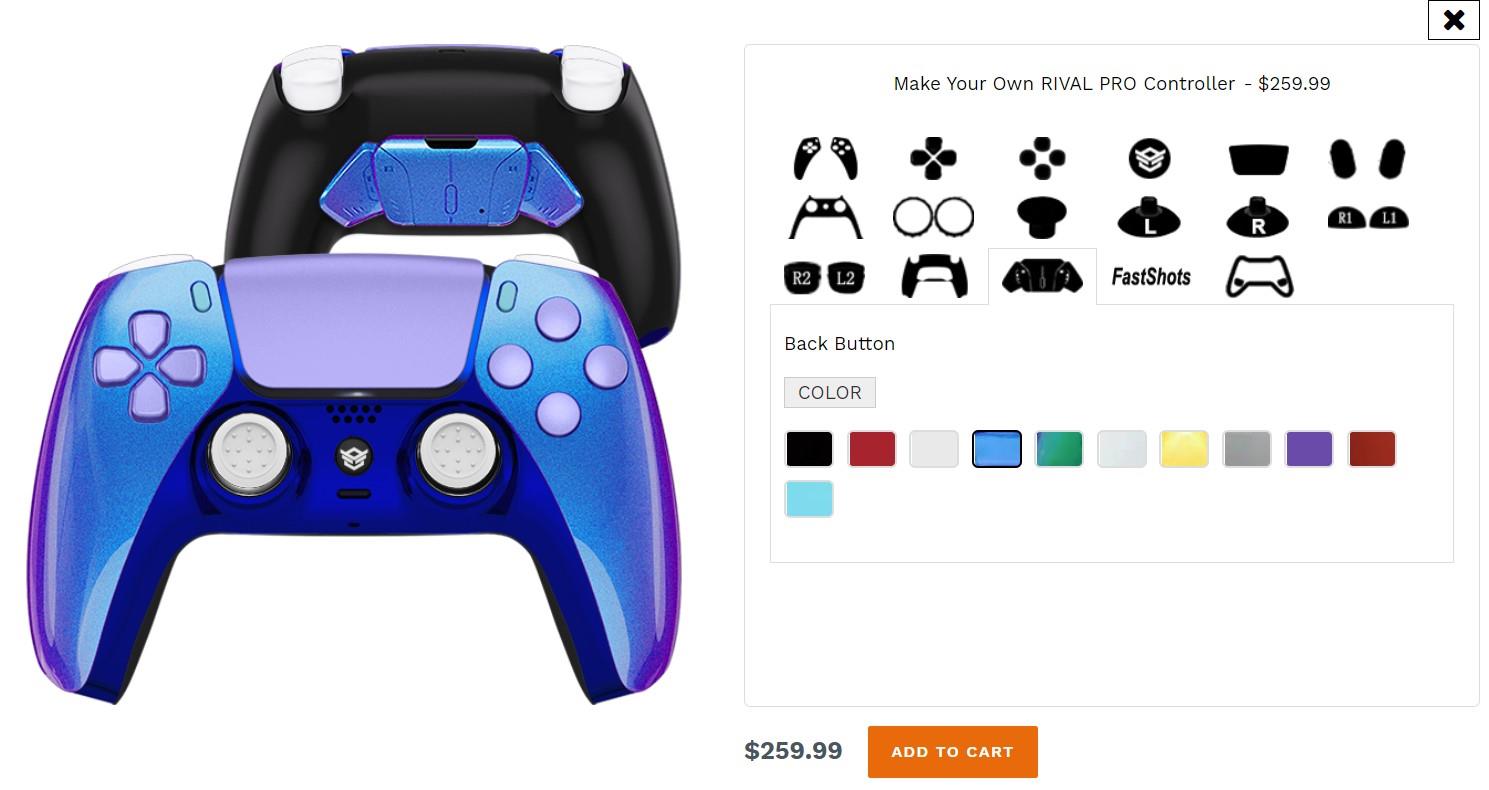 If you don’t already know why you would want any of the features on the Hexgaming Pro Ultimate controller, it is likely not a product you want to sink any money into. But for those that already understand the advantages of a product like this, rest assured that this is a very solid, very nicely put-together controller. The eye-candy is great, but the Hexgaming Pro Ultimate feels great in your hands, and is just as performant as you would expect.

Bottom line: You already know if you want this product, and you are wondering if it is well-made enough to make it worth the investment. The answer is yes.

With a variety of features that make it ideal for eSports competitive gamers, the Hexgaming Pro Ultimate Controller meets a very specific need. This will not take the place of a standard DualSense Controller for most gamers, as it removes some functionality to maximize the needs of its core audience. But for that group of shooter fans, this controller is a godsend. With a rock-solid build and some serious eye candy options, the Hexgaming Pro Ultimate Controller is a serious investment for serious gamers. 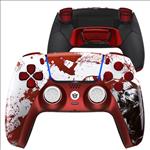