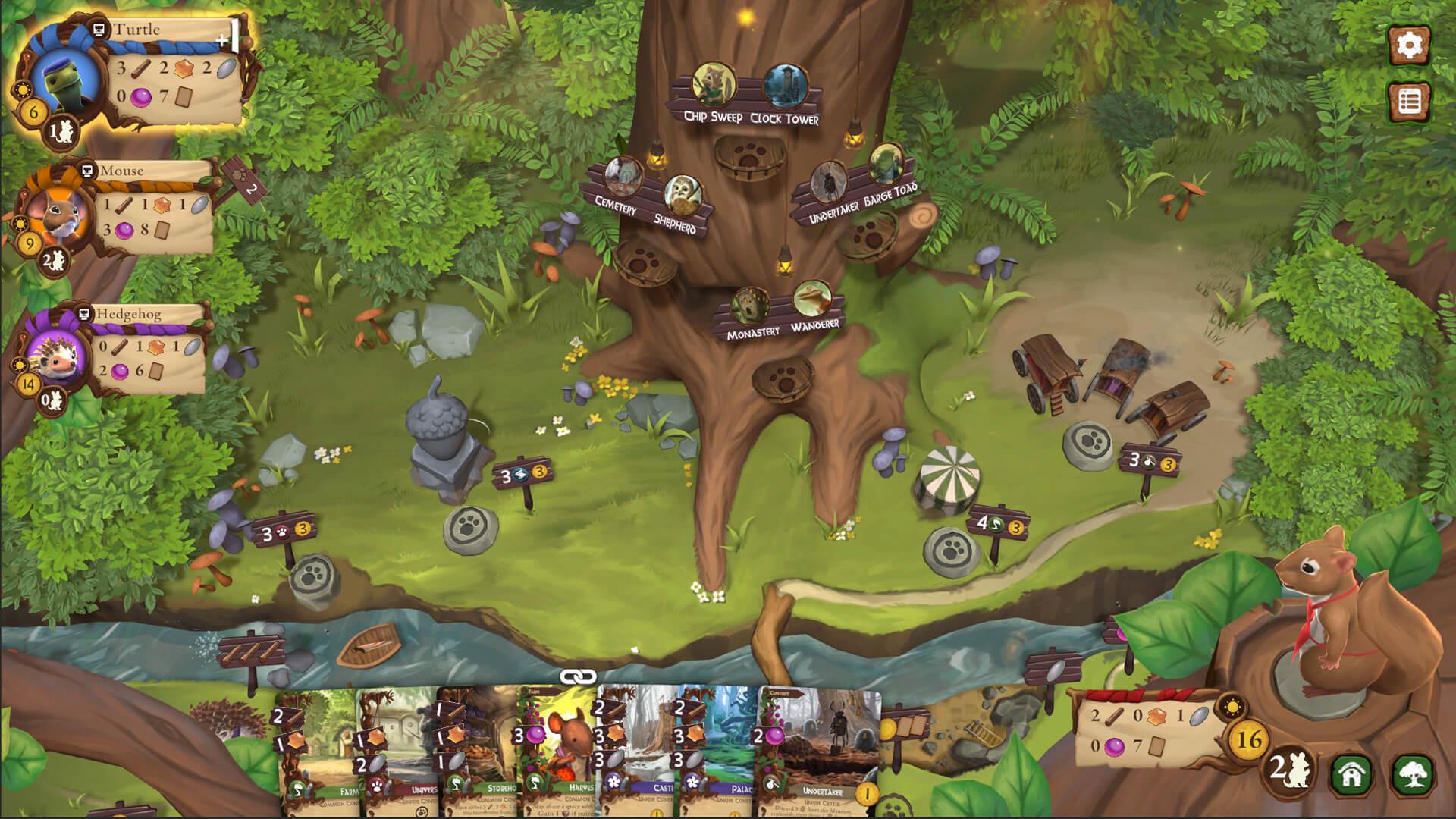 If you’ve never heard of GenCon, its tagline is “The Best Four Days in Gaming” and it’s easy to see why.  There are events and games taking place all over the Indianapolis Convention Center and surrounding hotels. Typically though the games being featured are mostly of the physical variety, with TCGs, miniatures, RPGs, and board games taking up 99% of what’s going on. There is the occasional digital presence, normally in the form of a couple of game rooms or classic arcade games lining the hallway that connects the Convention Center to Lucas Oil Stadium, but that’s typically about it. However, there is an occasional booth here and there where a publisher will have demos of digital games they’re working on and this weekend I checked out three from Dire Wolf Digital, all of them digital versions of existing games.

First up is Everdell, a city construction game that actually takes place in the forest originally published by Starling Games. The game takes place over four seasons beginning in Winter and you can have your workers go out and gather resources. These resources are then used to make various constructs and bring other woodland creatures into play. These constructs and critters can help you earn victory points and once you’ve done all you can do, it’s time to prepare for the next season and repeat the process. Once you’ve gone through all four seasons the game ends and whoever has the most victory points wins. 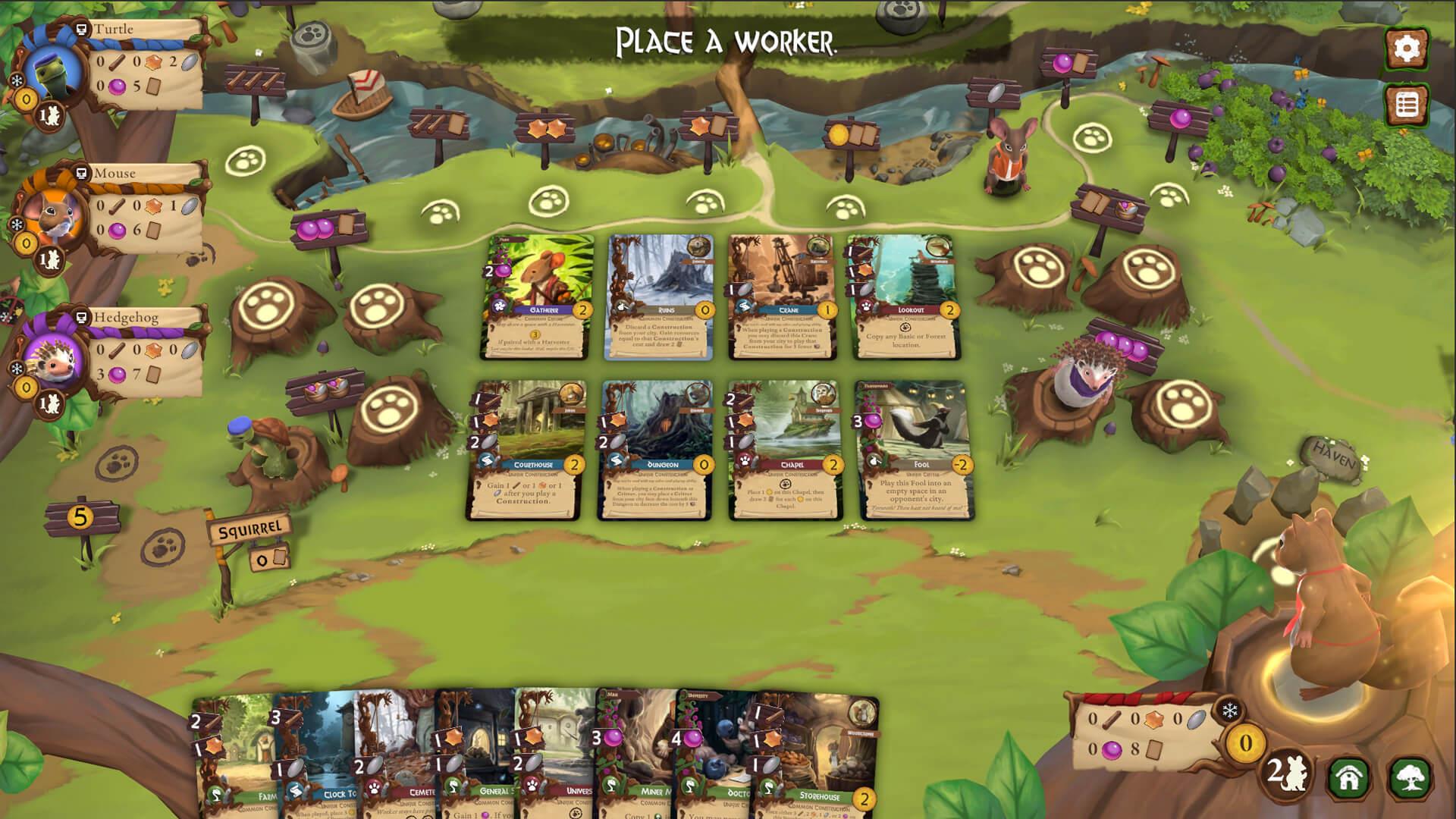 Of the three games I checked out this one definitely has the most strategy because there’s a lot more than just gaining resources and putting cards on the field. Some of the critters and constructs work together to help earn more victory points while other constructs can give points at the end of the game depending on certain conditions. I’ve never been good at resource management games like this so once the tutorial was completed I didn’t do so well. If you’d like to give Everdell a shot it’s available on Steam for $19.99, or on mobile devices for $9.99.

Next up is Wings of Glory, originally published by Ares Games, where you’ll take to the skies in strategic dogfights during WWI. Each fight has you taking on one or more enemy planes while you pilot various planes yourself, some as simple as a small plane with a single turret, while others may have a second pilot firing a turret from the rear of the plane as well as your main front turret. Each turn you’ll be able to plan your flight path by choosing three different movement options to either close in on the enemy or try to put some space between you and them. Once the plans are complete they’ll be executed simultaneously and after any movement is completed, if one plane is in range of another’s turret fire, they’ll fire upon the enemy and do a bit of damage and possibly inflict other effects like jamming the enemy’s turret or destroying the plane outright by hitting a critical spot. Once a plane takes enough damage it’ll be destroyed. 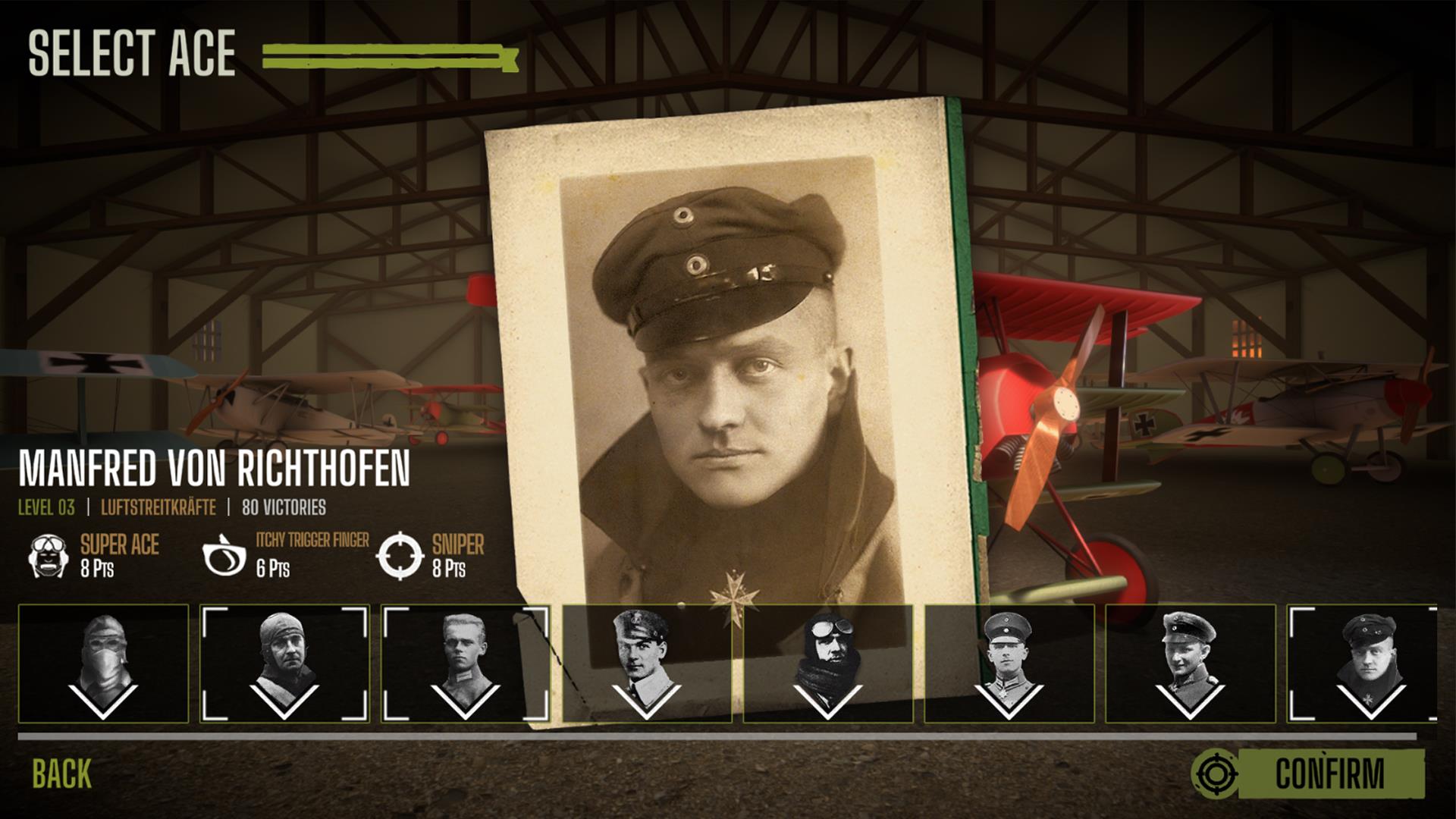 Wings of Glory also employs some strategy but this isn’t quite as difficult for me as Everdell, but still a challenge. You do have a range that you can fly as if you go outside of the main field of play you’ll lose. The challenge here is should you go directly for an attack or try to move away and put some space between you and them. This is a game that I might eventually pick up to play more of at some point. If you want to test your abilities in the skies you can check out Wings of Glory for $14.99 on Steam or $8.99 on mobile devices. 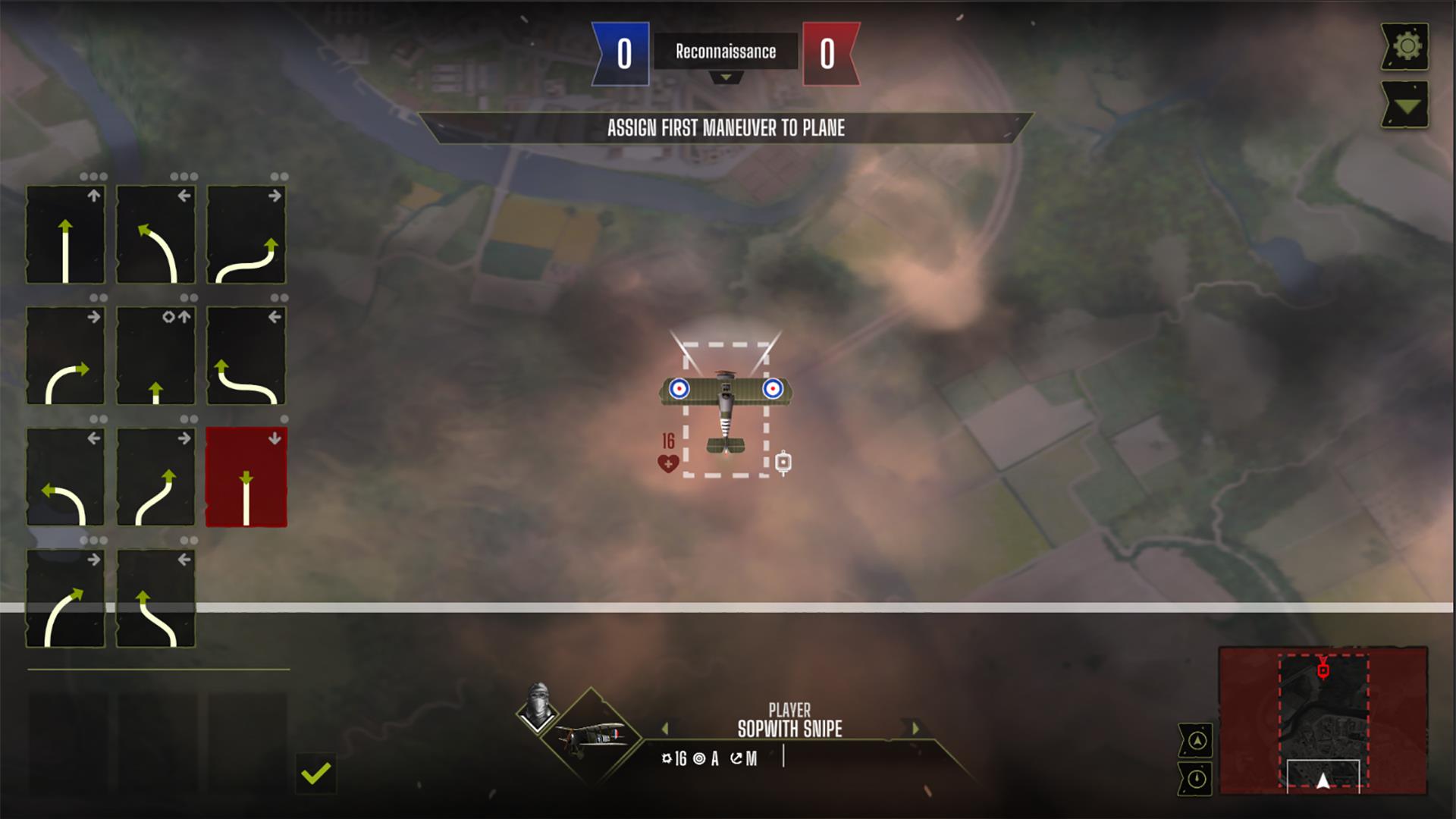 Finally we have Eternal, a digital card game that’s free to play on Steam, mobile devices, Windows, and Nintendo Switch, and originally published by Dire Wolf themselves. If you’re familiar with card games like Hearthstone then you’ll have an idea as to how Eternal works. You begin the game with a handful of cards and each turn you have a couple of options after drawing for the turn. Likely you’ll play a Sigil which acts like mana from Magic: the Gathering and provides influence you can use to play creatures and spells. Creatures that have been in play for at least a turn can attack your opponent all at once and the defending player can use any rested creatures to block (a defending creature can only block one attacking creature). The goal is to reduce your opponent’s life to zero. Sounds pretty simple except that the demo I played at GenCon doesn’t really tell you much and just throws you into the fray, only telling you how to play Sigils and other cards, but that’s it. 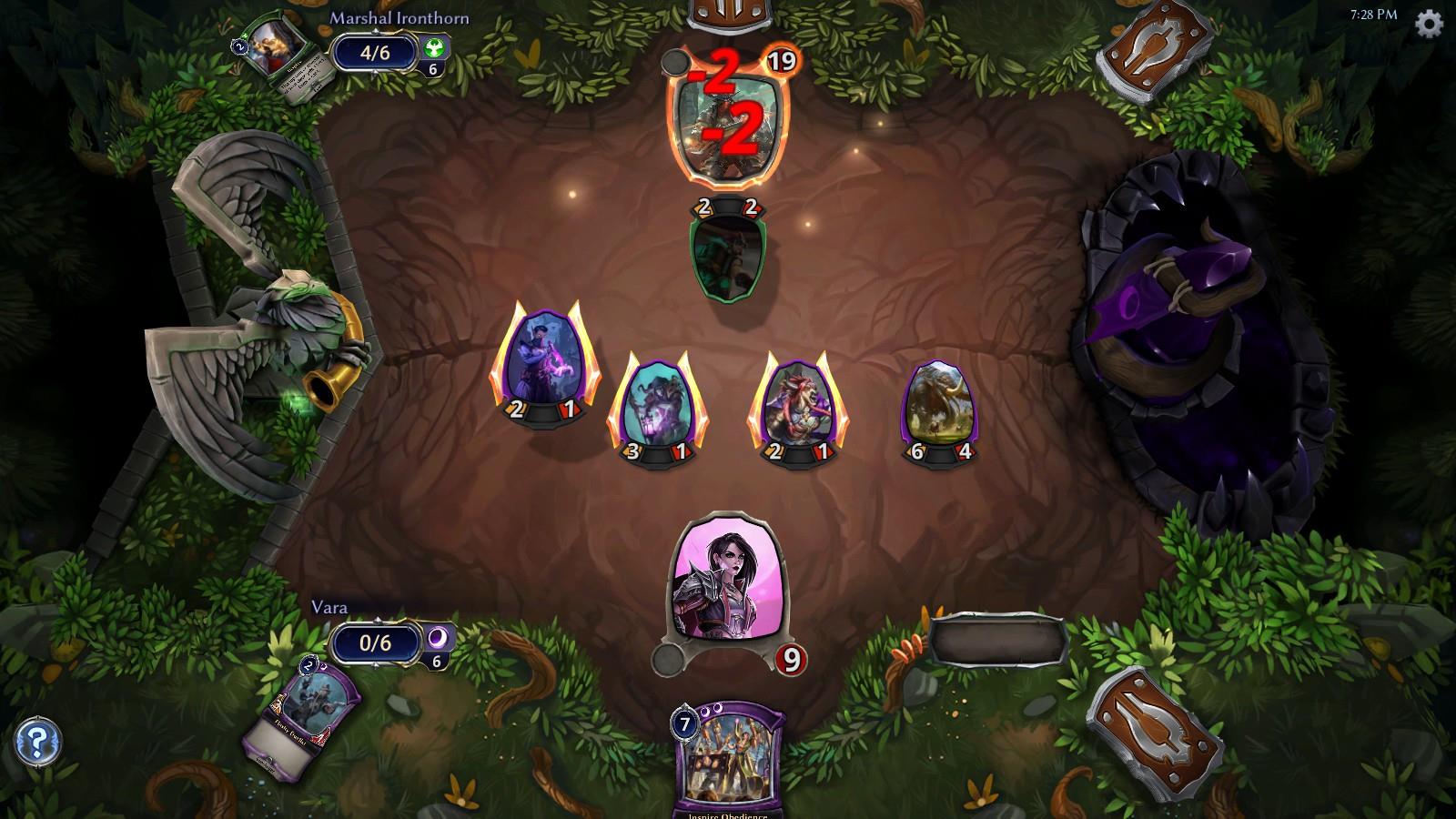 I learned the hard way that you only have one attack per turn so if you want to attack with multiple creatures, you have to choose them at the same time instead of going one at a time. The demo didn’t even tell me how to block as the cards in some games have a keyword saying they can block while here you can block with any rested creature. Thankfully the full game has a much better tutorial that walks you through a lot of the game’s mechanics. Furthermore the full game is free to download on Steam, iOS, Android, and Nintendo Switch, so if you want to check out Eternal, I highly recommend downloading it on one of those platforms. Eternal has been out for a while now and GN’s own Eric Hauter checked it out a while back thanks to Twitch Prime. Needless to say that Eternal is still going strong today with new cards and a good entry barrier for newer players. 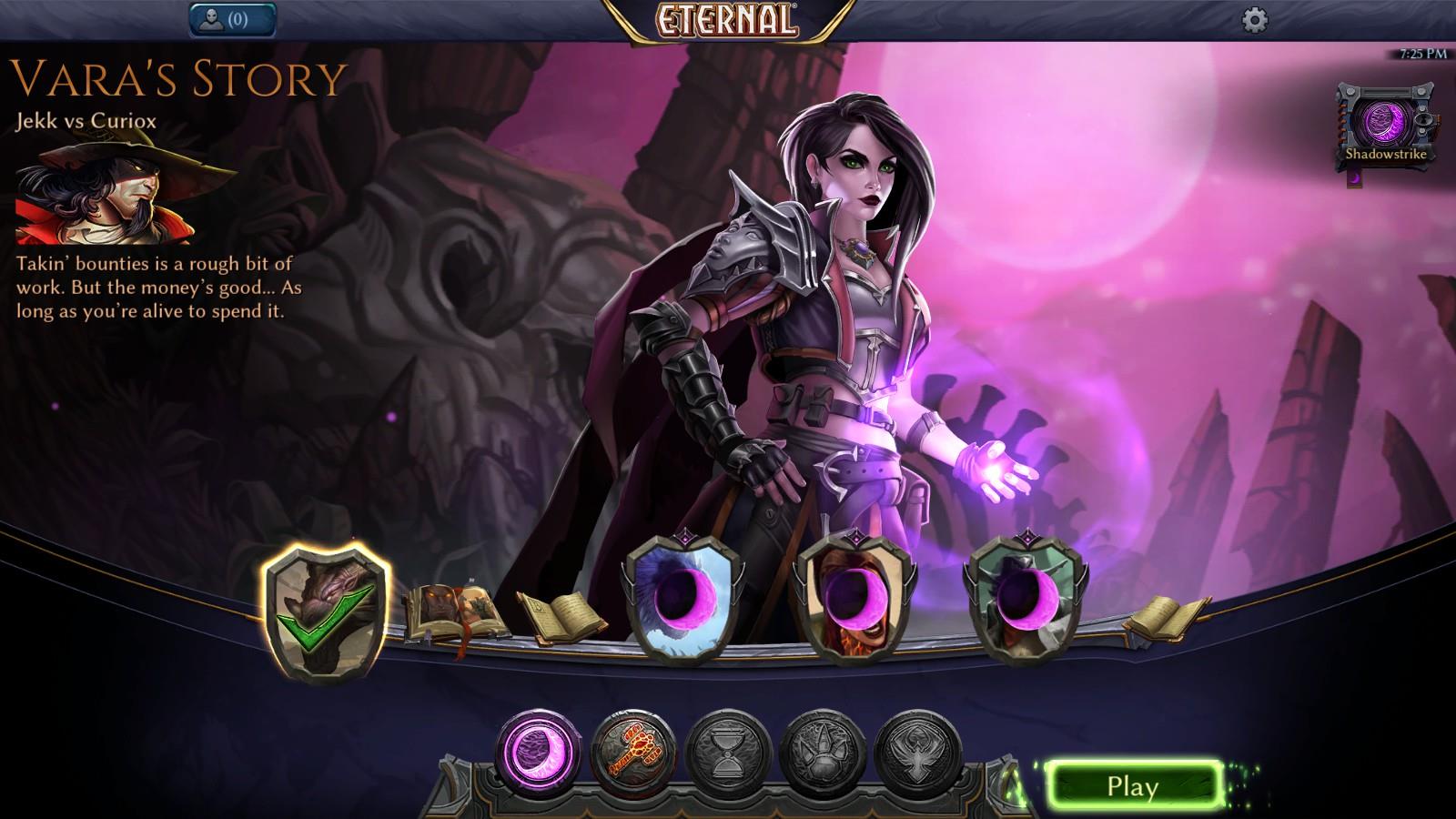 As stated earlier there isn’t typically much of a digital presence at GenCon. While a few booths may be showing off software you can use to help run your Dungeons and Dragons sessions, most of the time you’ll see companies showing off board game or card game versions of video game IPs. Kess.co is making new Mega Man and Contra board/card games while 317 Games is making Shadowgate: The Living Castle based on the recent Shadowgate remake. However, if you look around the Exhibition Hall long enough you might just come across a publisher looking to take their successful board games and enter the realm of digital entertainment.