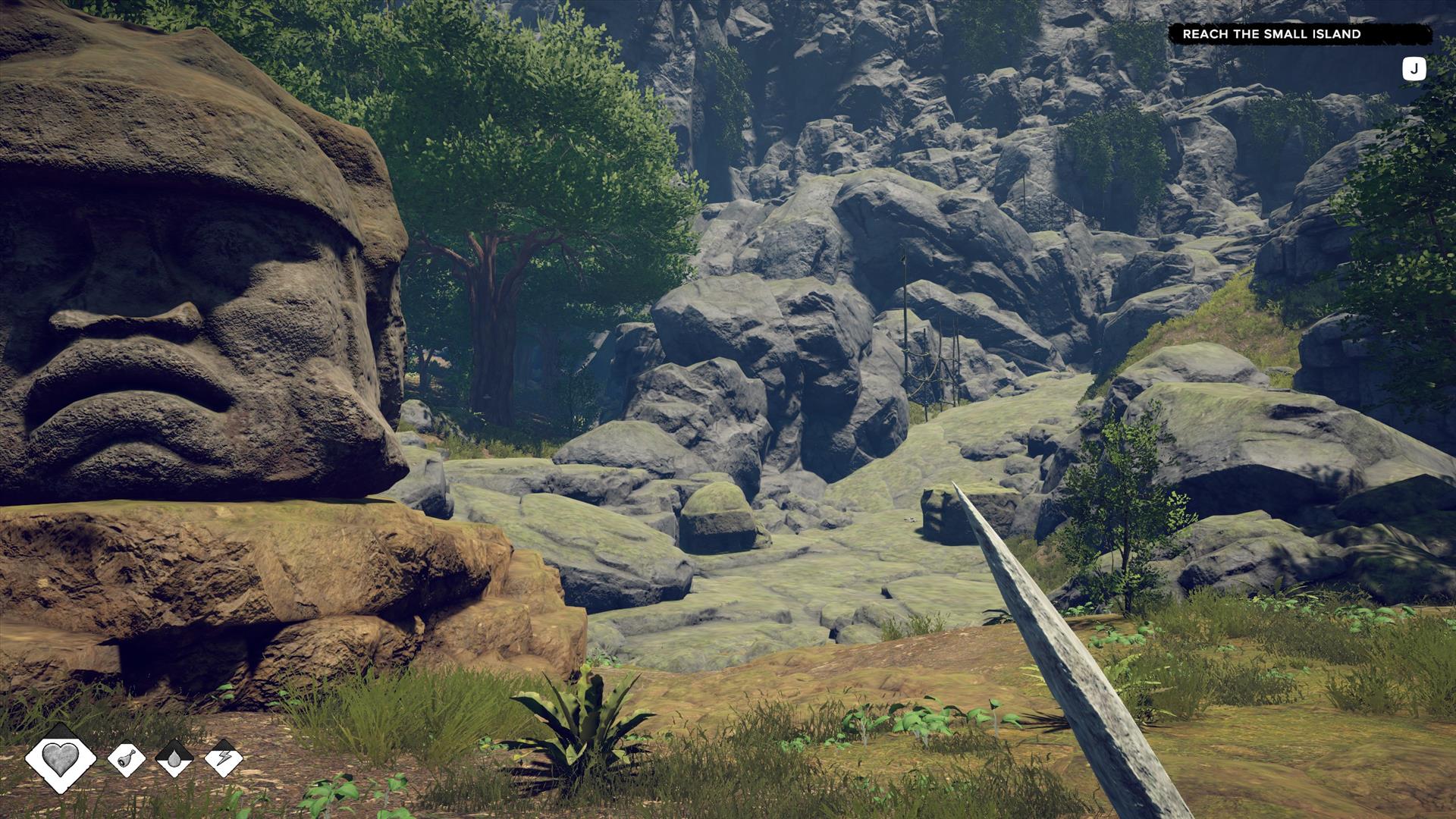 Written by Sheyne Bittner on 8/15/2022 for PC
More On: Survival: Fountain of Youth

Survival: Fountain of Youth, scheduled for release in Q1 of 2023 by Odinsoft, casts you as a crew member on an expedition for the Fountain of Youth. The game takes place in the 16th century Caribbean islands and the expedition is led by non-other than the famed explorer Juan Ponce de Leon and his three ships Santa Maria, Santiago, and Christabel. However, just like Gilligan, you quickly change roles from crew member to shipwreck survivor as a powerful storm hits and you only have minutes to choose two of nine items to take with you and flee the sinking wreckage. As your eyes open after escaping death on the sea you find yourself on an island filled with resources and dangers that will either help you survive or savagely kill you. 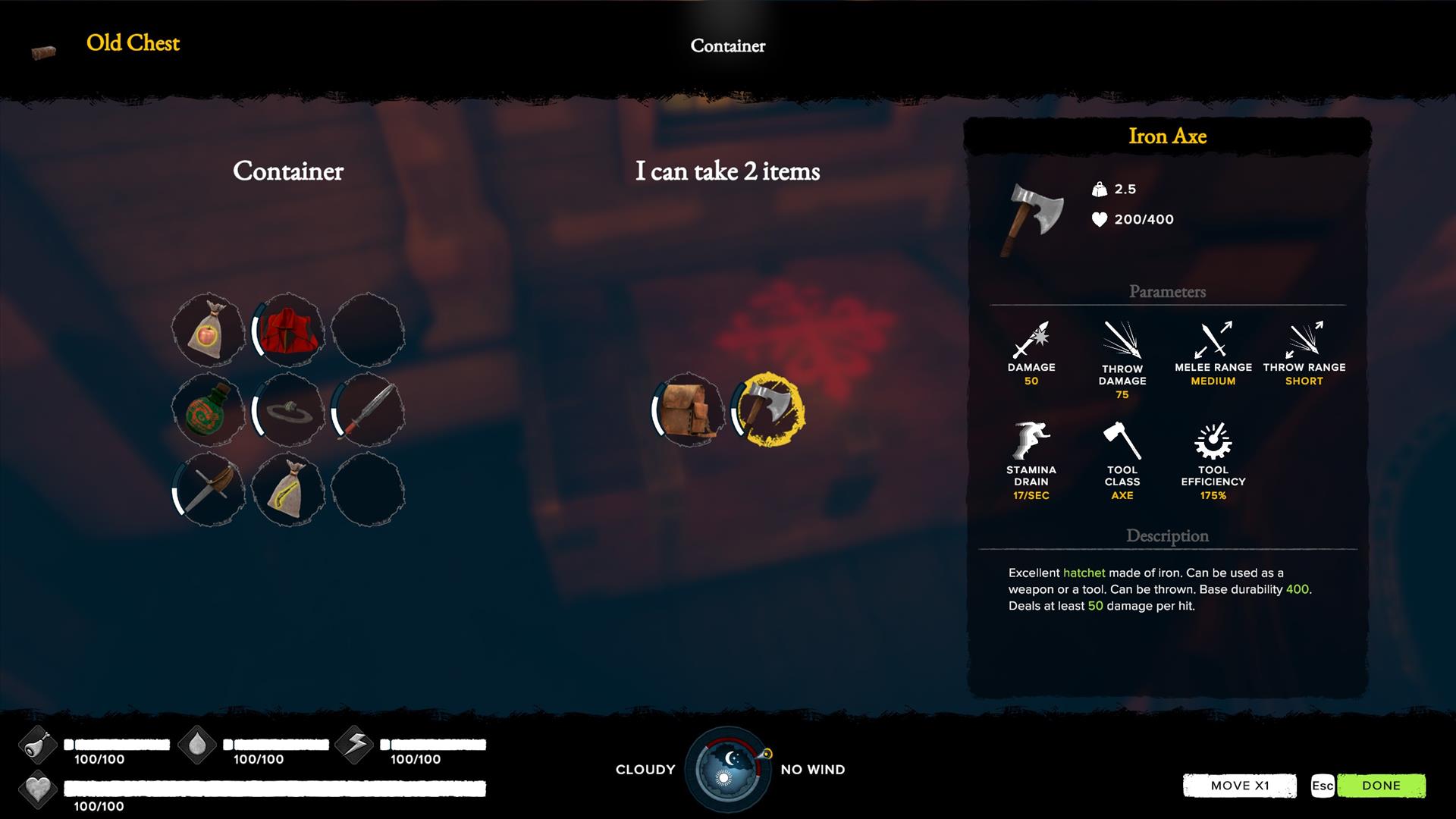 The tutorial portion of Survival begins just before the shipwreck and continues when you regain consciousness. It will teach you the basics of crafting, introduce some of the resources and food sources, and point out a few of the many dangers. The story also starts to unfold, and you learn there are secrets to discover on the islands left by an ancient civilization, secrets that could lead you to the famed Fountain of Youth.

As a survival game, Survival: Fountain of Youth is solid. You need to take it slow and put survival above trying to solve the mysteries. Gathering food and setting up a base camp out of the elements needs to be a priority. Weapons and tools will also be needed to keep you safe and alive. The crafting is extensive, and the game guides you to blueprints of what can be crafted each time you pick up a new resource. There is also a crafting tab that groups items into categories or you can go to an item in your inventory and from there see what it can be crafted into, which was very useful. You can craft clothing, weapons, tools, shelter, and many other items. Being a demo, a few items were not available, but the majority were. 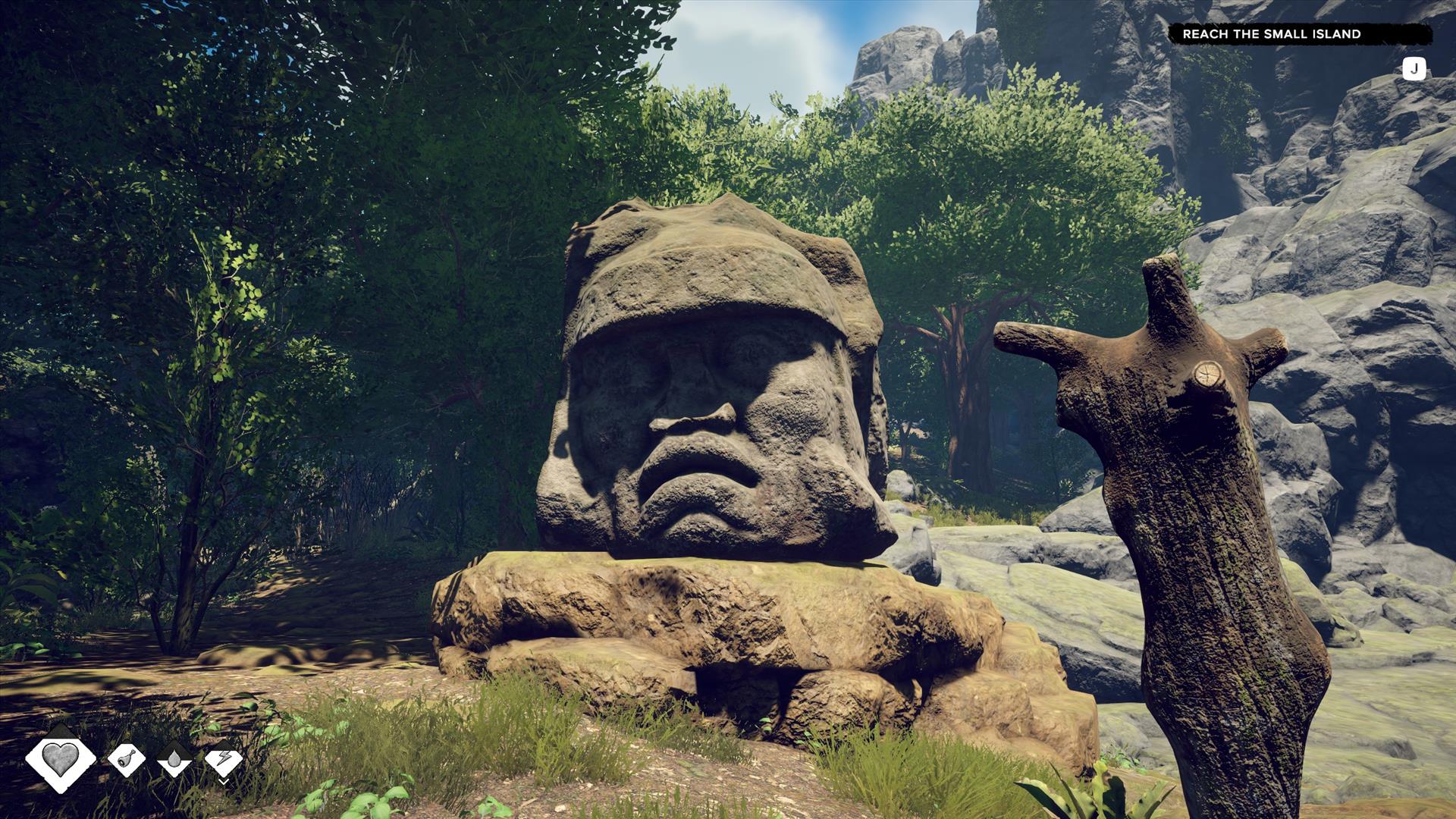 Food and water need to be gathered or hunted, and there are multiple sources of both. I managed to survive on tropical fruits and hunted a few crabs along the way as well. There are also wild chickens and turtles that can be hunted. The rest of the wildlife that I came across wanted to kill me. First, the wild dogs, then the scorpions in my cave, and as I ventured further into the jungle wild boars, snakes and harpies managed to damage and kill me multiple times. Not to mention a death resulting from running off a cliff while be chased by a boar; fall damage is real in Survival: Fountain of Youth. When you die everything in your inventory will remain at the spot you died, and you can go and retrieve it after you respawn. When you respawn, you have some of you health taken away and after 6 deaths you will have to restart, unless you have a potion to regain the lost health segments. 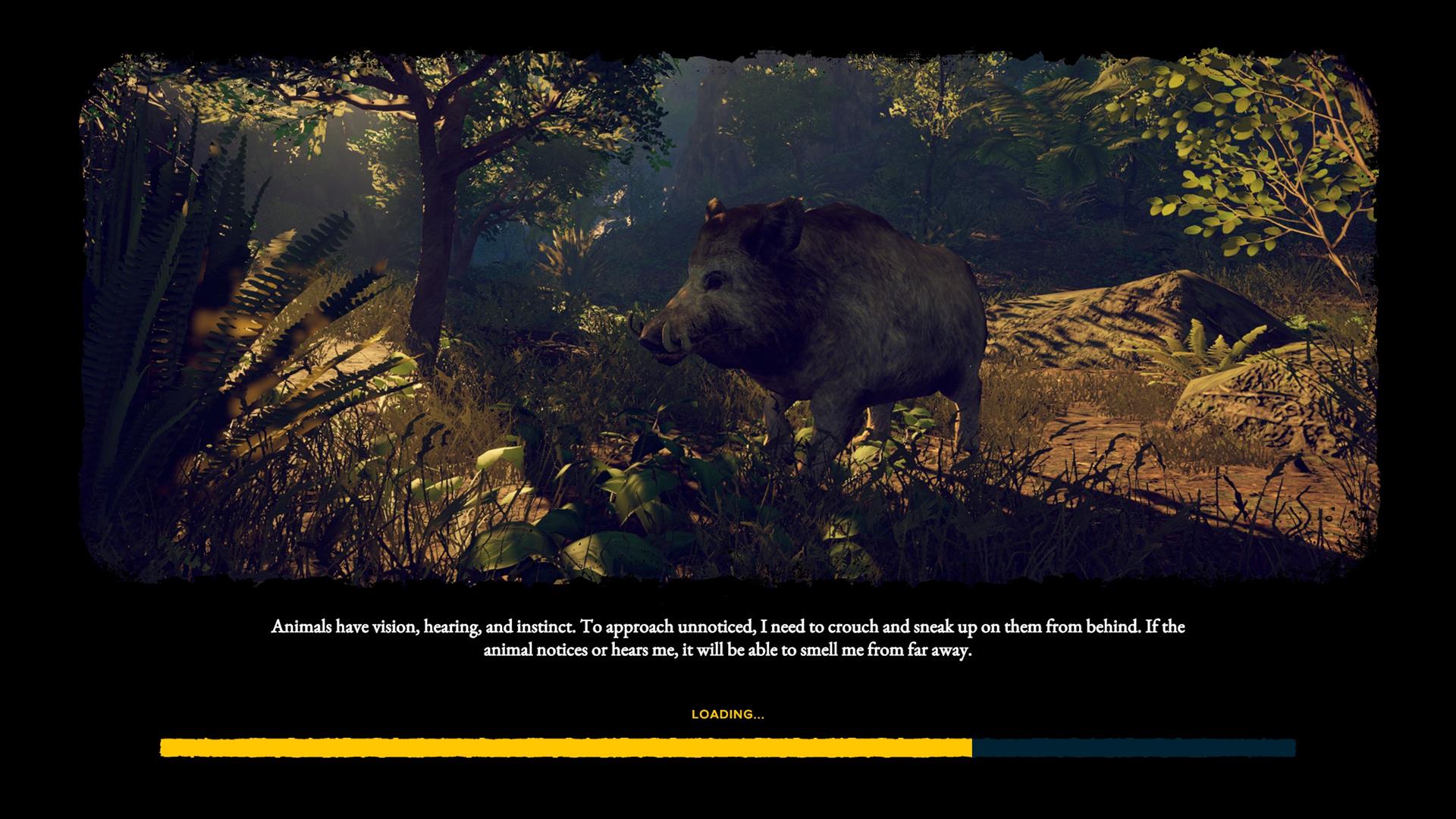 Besides the wildlife, the environment can also be your enemy in Survival: Fountain of Youth. Clothing needs to be crafted for protection from sunburn, snakes and scorpions can poison you, you can catch a cold depending on the weather, and stomach ailments can arise just from eating food. There is a progression to all the ailments, which get worse if left untreated. Luckily you can find herbs and craft salves to heal and stop their progression. Sleeping will help you regain health and energy as will some food and the special potions you find along the way. Just a little hint, watch out for mosquitos and malaria.

As you explore the starting island you cannot miss the signs of the ancient civilization that once lived here, and as you explore the ruins they left behind you will learn their lore and gain knowledge of how they survived to help you along the way. Farther into the game there will also be puzzles to solve that may lead you to treasure. Your character also has a vision skill that, when used, will highlight items and important things in the area. Remember to use this to find thrown spears or other important items. 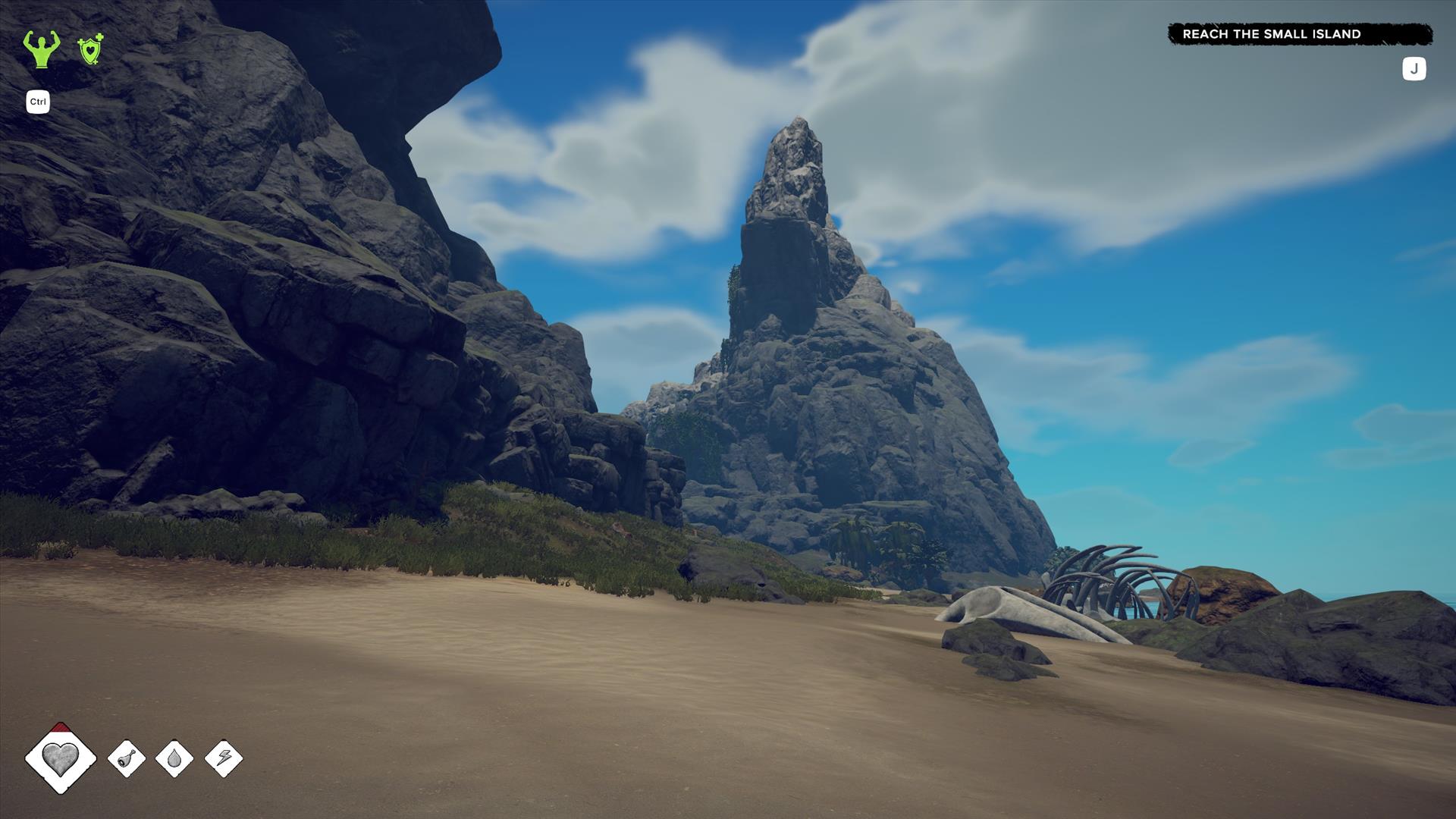 I played the demo that is available now on Steam, which is 16GB and contains a lot of content. After 5-6 hours of playing on normal difficulty and restarting once, I didn’t even reach the given objective and think it will take me much longer to get there. On my first run I quickly learned that resources are scarce and need to be used wisely. Then I found out that trying to speed run to the objective results in death. Eventually you will be able to craft a raft and leave this island for the next one in search of other survivors. The gameplay is solid, and as a survival game I would recommend this to fans of the genre and people looking for a challenge. The game is made on the Unity engine and looks pretty good. The only criticism I have is that the voice over and cut scenes are not as polished as they could be, but it did not affect my enjoyment of the game.

There is more to this game that I did not get to experience, as you will eventually build a raft and must navigate through storms and other obstacles. This should become easier as you gain skill and resources to start building actual ships. I did not see all the wildlife as there are also alligators, jackals, jaguars, and more. Plus, there is a lot of marine life, including sharks and you can craft a fishing rod to fish or venture into the sea to spear fish, harvest seaweed and find sunken treasure. I will be playing the demo until I reach the first objective at least and think most people will enjoy the challenge of Survival: Fountain of Youth while playing the demo or playing the full game when it is released. The demo is available to download from Steam now.

As a kid I always wanted to play board games and would drive my parents and brother crazy with my never ending requests for 'just one more game'. When I think back, my competitive nature stands out as the main reason for wanting to play again and again.... I wanted to WIN! So naturally, when I played Pong for the 1st time, as a 12 year old on a family vacation, I could not get enough. I needed to get a better score and bounce that pixel as it moved ever faster until I couldn't keep up. I know I just aged myself but that is Ok. I grew up when video games were just beginning to evolve, playing on all of the 1st generation consoles and spending hundreds of dollars in the arcades, that high score had to be mine. Then it was on to computer games, Oregon Trail in the computer lab at school, and some Castle Wolfenstein on the monochrome monitor too. This love of gaming never left and I never stopped playing video games. The quality, quantity and variety of games available now is astonishing and being a PC gamer, it is endless. There is nothing like it in all the entertainment world and you definitely cannot beat the cost to hour of entertainment games provide. I play games from various genres, but especially enjoy simulations, FPS and survival games.