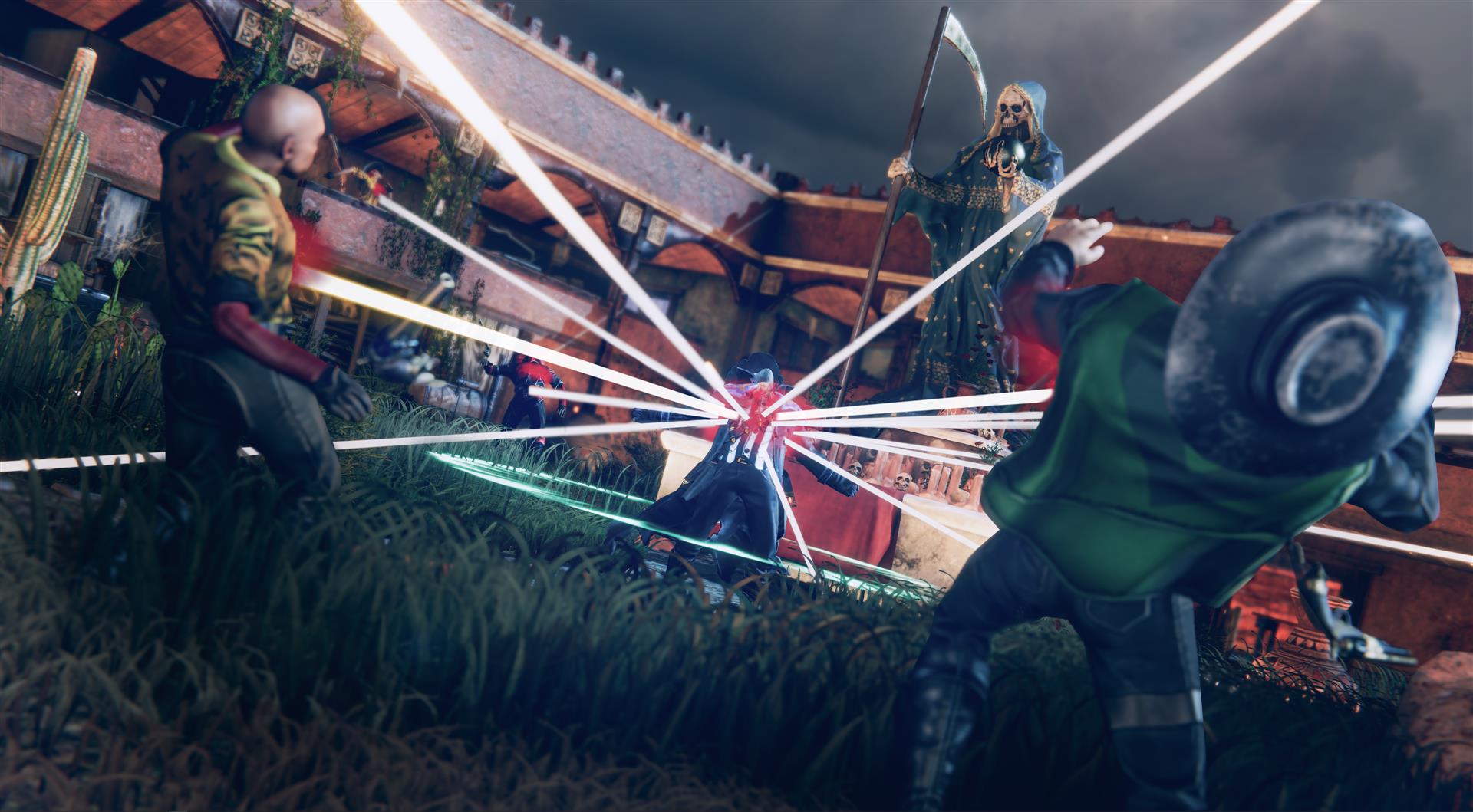 Hard West 2 has put a spell on me. In the week since I’ve been home from vacation, I’ve left Hard West 2 running non-stop on my gaming PC in the background. Whenever I’ve had a break from life, I’ve scurried back to my desk and picked up on the current battle I’ve been fighting through. I’ve loaded and reloaded battles, even some I’ve won, to try different tactics for greater success.

I’ve got like 40 save files, and I’ve not been above save-scumming, but it’s been tough to keep track of which save is which because I’ve got so many. This is a game that has me trying to achieve perfection in my strategies, a game that has me restarting or loading an old save if I miss even one of a given battle’s side objectives. My progress has been slow, but I’ve been enjoying the hell out of Hard West 2. 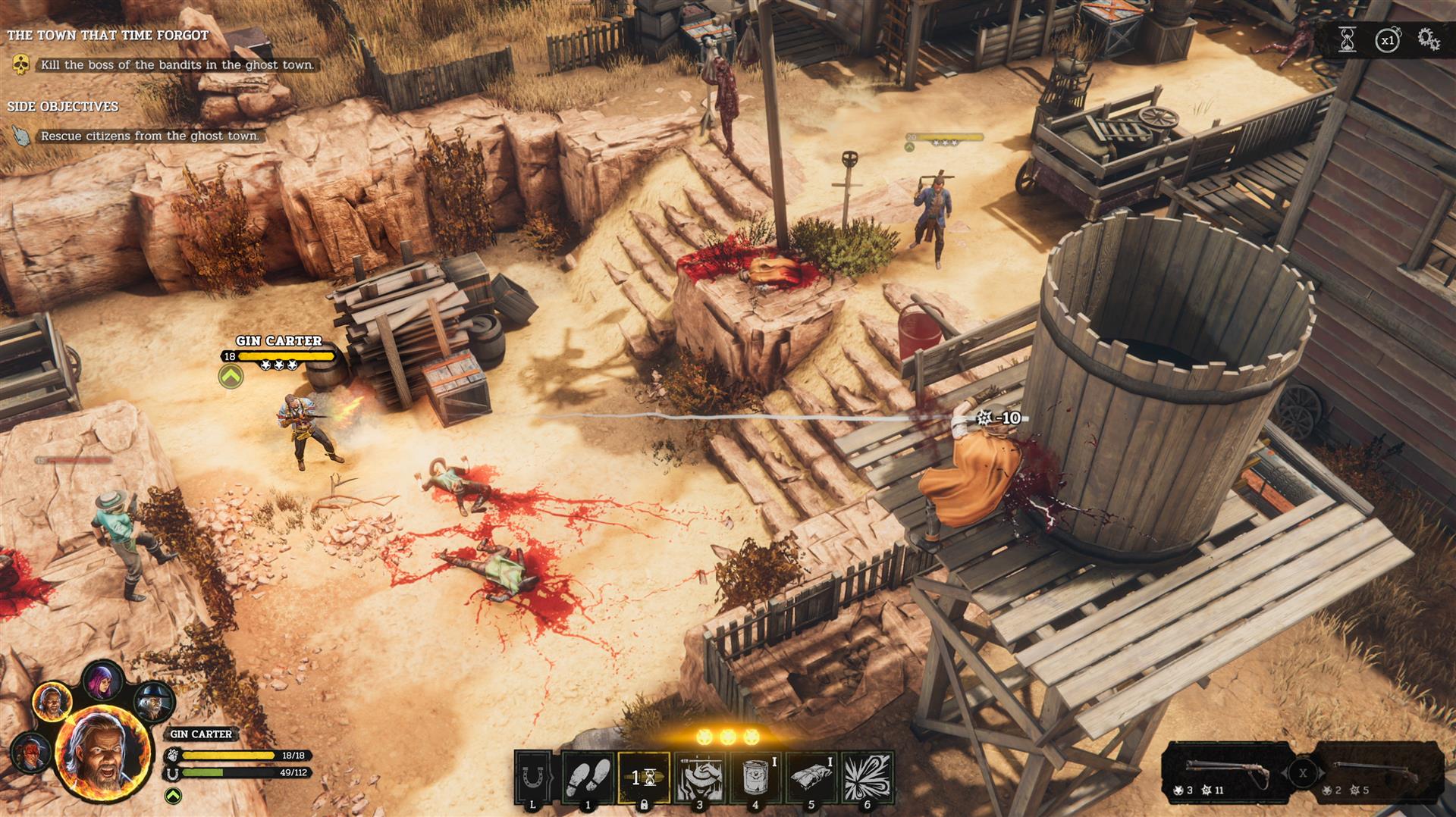 I never played the first Hard West, but I get the impression from this one that my showing up late to the party is totally fine. I can’t tell you what threads – story or otherwise – connect the two games. But if I had to guess, I would wager that beyond the setting and the fact that this is a strategy game there isn’t much that binds the two experiences. I felt completely comfortable jumping into Hard West 2 with zero knowledge of its predecessor, and the game does a fine job with tutorials to get new players up to speed.

The Weird West has been getting a lot of play as a setting in video games lately, a trend that is totally fine with me. I am quite happy to mix my cowboys with witches and zombies (in this case, revenants), thank you very much. In Hard West 2, players will be guiding a group of not-quite-heroic outlaws through an adventure in an Old West that has been afflicted with a strange, unnatural winter, bringing snow and freezing cold to desert towns in the middle of June. 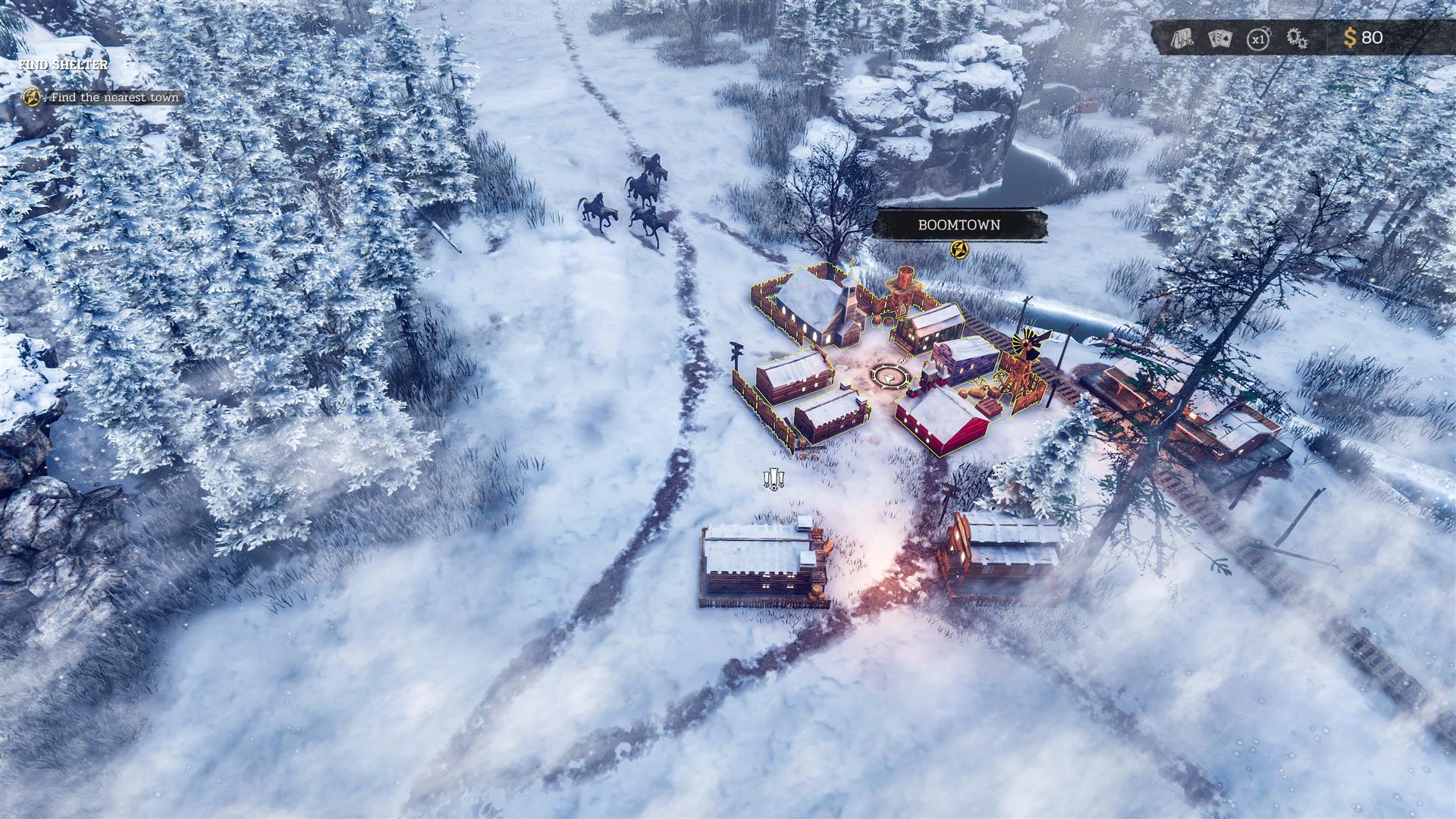 At the outset of the game, Gin Carter and his gang are attempting to rob a train – an undertaking that quickly goes off the rails, quite literally. It turns out that their target is actually some sort of mystical transport, complete with millipede legs and a demon in the engine playing engineer. Tricked into playing a hand of poker for their freedom (pro tip: never play cards with a demon), Gin and the gang lose their souls and find themselves scattered across the Hard West. Swearing revenge (and desiring the recovery of their souls), the gang regroups, picks up a few new allies, and sets out to find the demon and put things straight.

Hard West 2 plays out in two modes – as a text adventure, and as an X-Com-like strategy game. Most of the story is advanced through text conversations, which are surprisingly well-written and enjoyable. The player moves around a map, looking for locations to engage with, most of which lead to a text exchange. These encounters are fairly linear but go a good way towards establishing the characters and motivations - also providing weapons, cash, or other goodies depending on the way you resolve problems. 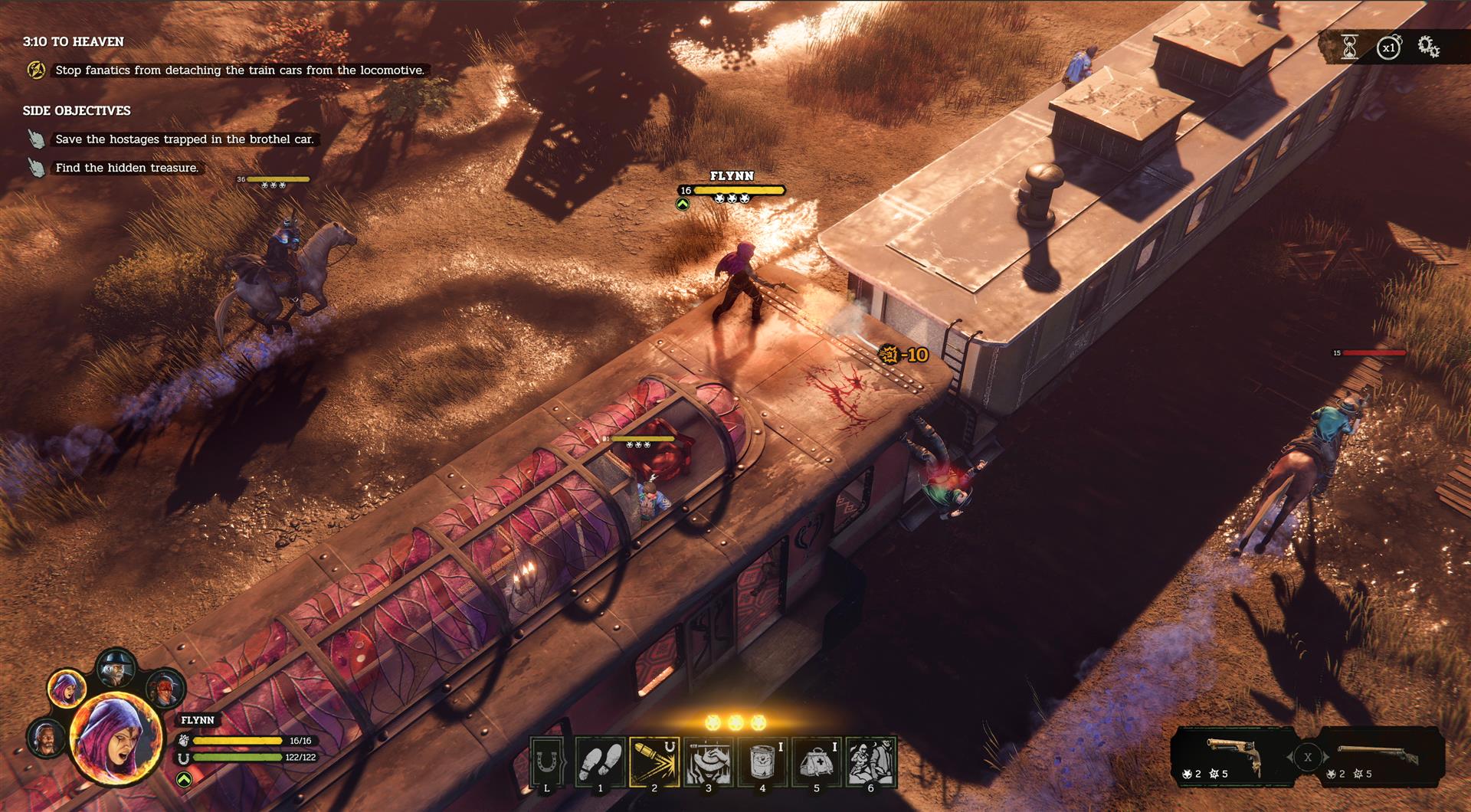 The player can also camp at any time on the overworld map, which allows time for healing (provided you have the provisions to do so) and conversation. Throughout the game, the player chooses to increase their relationships with various gang members by siding with them in disagreements. These moments aren’t punitive; the person you side against doesn’t hold a grudge. But the person you side will eventually unlock permanent perks to be used in combat, with new conversation paths unlocking as well.

But the real meat of the game is the turn-based combat system, which contains enough unusual mechanics to feel unique in the genre. The banner feature is the “Bravado” system, which allows any character to completely refill their three action points upon making a kill. This changes the usual dynamics of strategy battles, forcing the player to think about how many enemies they can take out in a single turn. 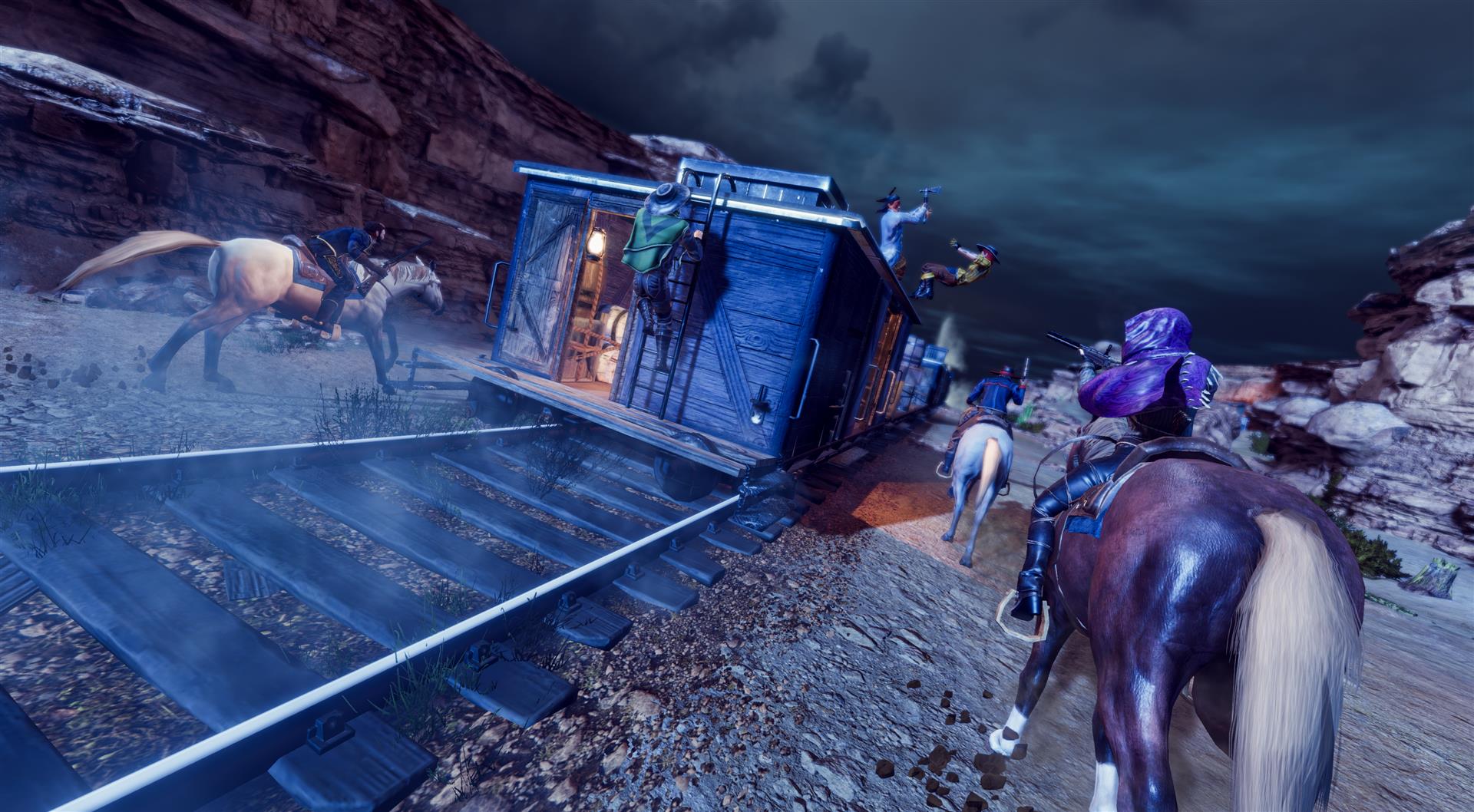 Since the player is almost always hideously outnumbered by creatures with interesting and challenging abilities, I found myself staring at the screen for minutes on end to plan my “set ‘em up and knock ‘em down” strategies. When things go well, using Bravado can result in a spectacular string of kills, leaving dead bodies in your team’s wake as they cut through an entire army. But this often requires pushing your guys out of cover, displacing repeatedly as you dash from baddie to baddie. One missed shot at the wrong moment can completely disrupt a plan, leaving characters exposed and vulnerable.

Characters also have a variety of special powers that can be activated by collecting playing cards. Create poker hands in a character’s inventory, and you can unlock abilities that strengthen your stats or allow special moves. Gin, for example, can blast a group of baddies for a focused AOE attack. But the best (and most game changing) character is Flynn – a young woman gifted with magical powers she doesn’t understand. Flynn can magically change places with any character in her line of site for just one action point, which can drag guys out of cover and leave them in the middle of the killing field while Flynn takes their place. The power of this ability is amply demonstrated in one battle, where the player faces four opponents with the same ability. Bit of a nightmare, that one. 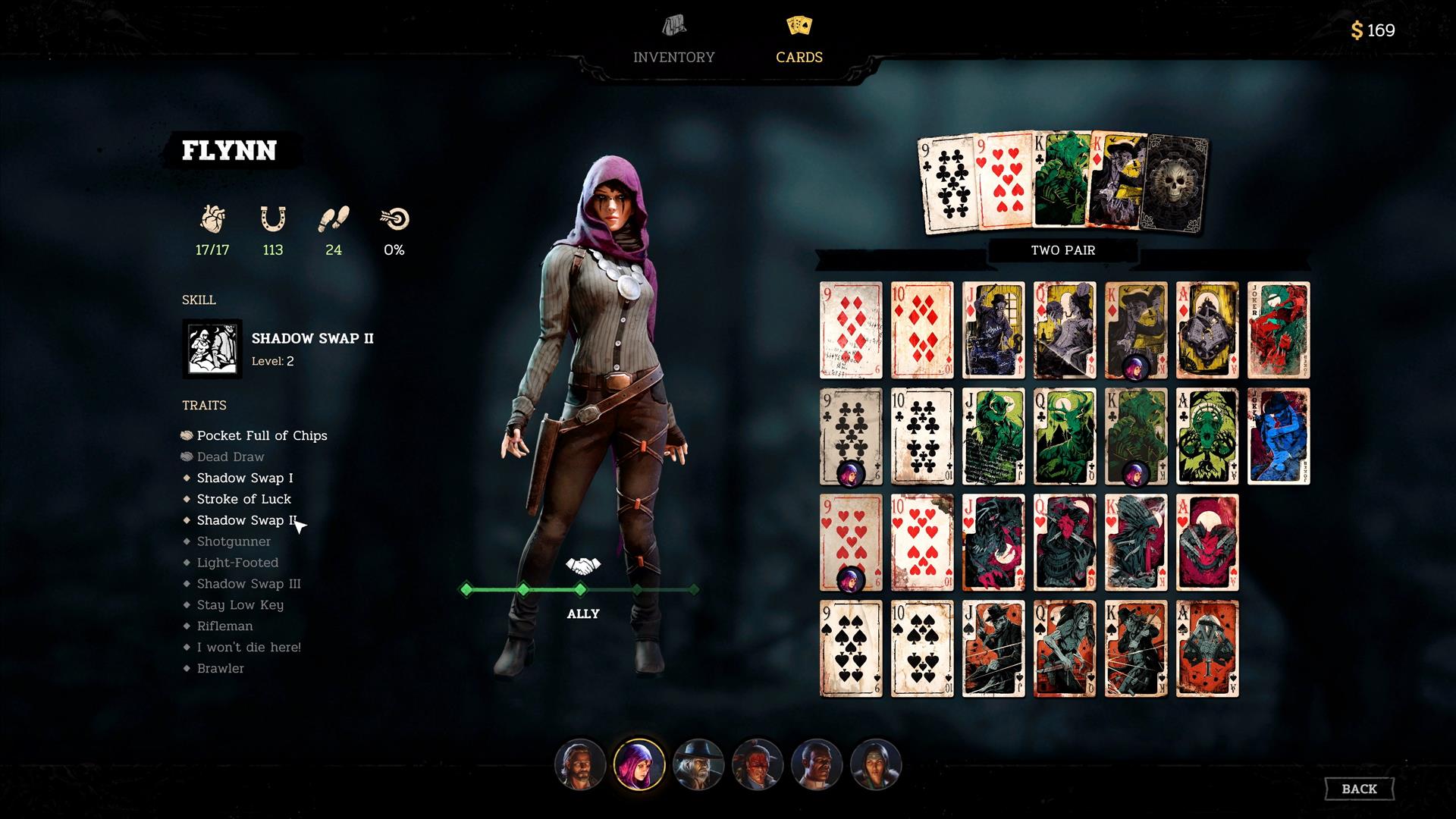 In fact, many of Hard West 2’s battles are difficult. I was skating through the first few on the default Hard difficulty, but once I got past the opening battles, I quickly retreated to Story mode. Think of it like this: on tougher difficulties, Hard West 2 might only present one way to defeat a mission, forcing the player to puzzle out the solution. On Story mode, the game can be played like other turn-based strategy games, opening things up a little and allowing for creativity. I preferred, the latter, but either is a legitimate and fun way to play. And even on the easiest difficulty, I found myself being very careful to plan my moves, as one wrong click could doom me to restarting the entire mission.

I did find that I was making those wrong clicks more often than expected. Hard West 2 has some verticality to it, with enemies often hiding in different stories of multi-level buildings. Players can supposedly select the level they want with the middle mouse button, but I frequently had a hard time figuring out where I was in relation to the bad guys. You can move around the map and rotate it with the keyboard, but I wanted a way to change the vertical angle through which I was seeing things. It was a small thing, but annoying. I also got a bit frustrated with a few moments when I couldn’t shoot folks on different levels from me, even though they were clearly in my character’s line of sight. 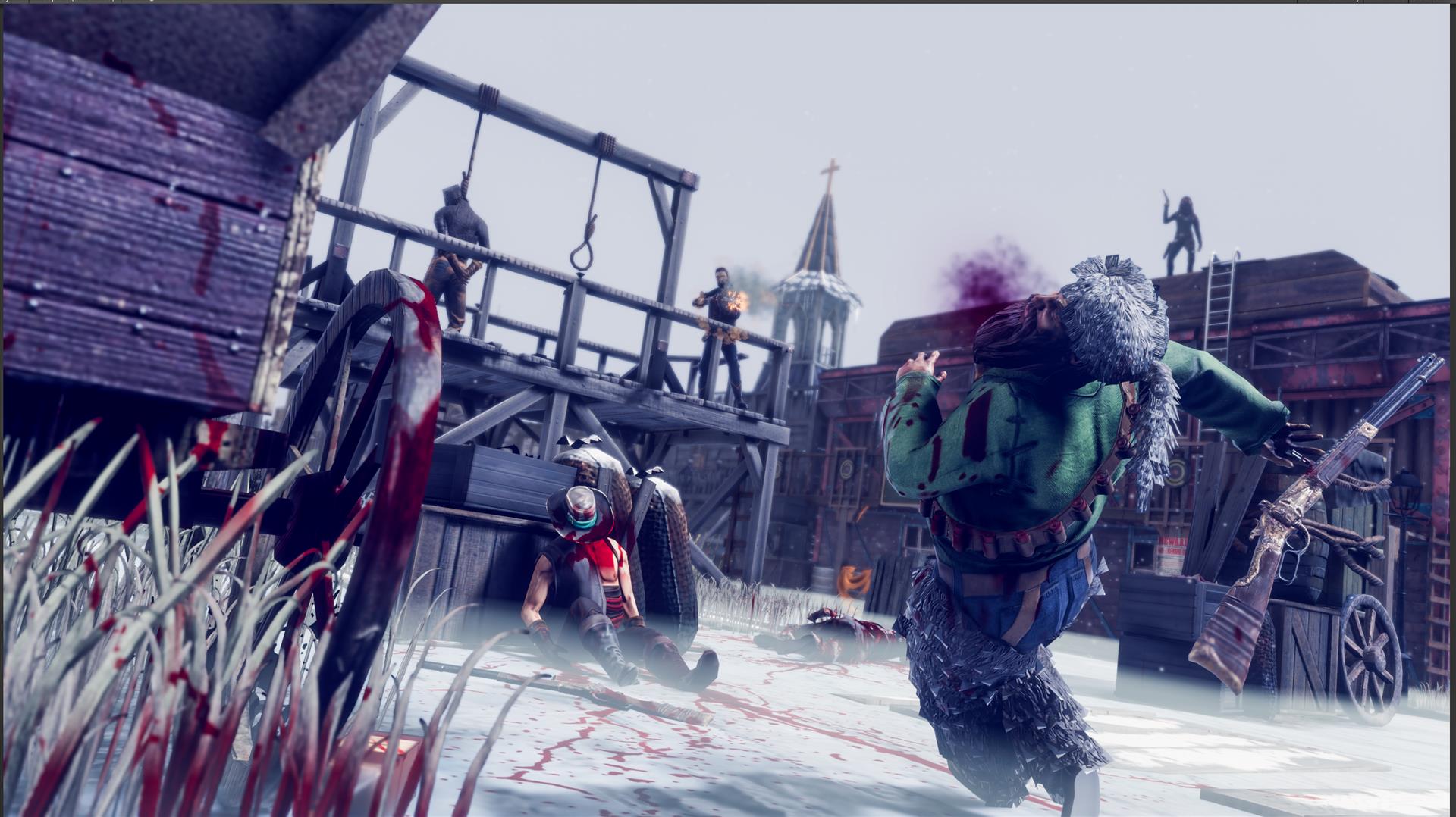 But the slightly fiddly controls are a small price to pay for the overall experience offered by Hard West 2, which is pretty fantastic. With a rollicking story, great characters, and some stand-out strategic options, this is a game that sets itself apart from and above many of its competitors. It is also very reasonably priced, so if you have any love at all for turn-based strategy, give this one a shot. You won’t be disappointed.

Hard West 2 offers a fun mix of text adventures and turn-based strategy battles, with just enough of each to keep things fresh. Awesome and unique mechanics are highlighted in a combat system that forces players outside of their "overwatch" comfort zones, allowing new tactics not seen before in games of this ilk. A bit of fiddly control work does little to tarnish the stellar gameplay. Highly recommended for fans of the genre.