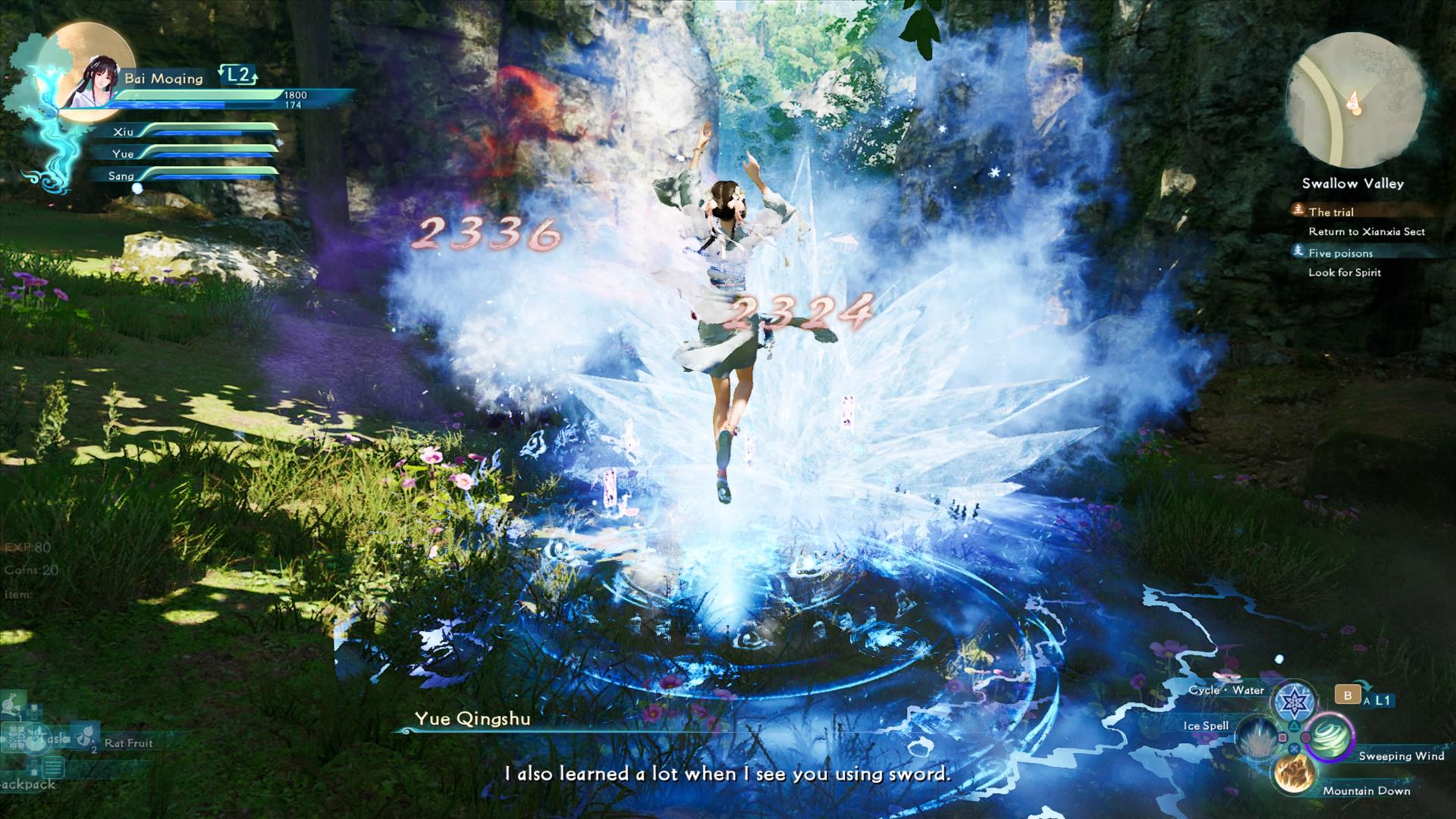 Sword and Fairy: Together Forever

In an industry overrun by Western and Japanese role playing games, it’s nice to see some representation from China as well. You may have heard of The Legend of Sword and Fairy, a long-running media franchise that dates back to 1995. The original game, which incorporated elements of wuxia and fantasy, spawned huge success in mainland China and Taiwan, and is now seeing a seventh entry in the series. Sword and Fairy 7 initially launched last October on PC, but is now getting a PlayStation-exclusive port under the name Sword and Fairy: Together Forever. Although this console port doesn’t add anything new story or gameplay wise, it improves heavily on the load times, optimization and technical issues that plagued the PC version, whilst bringing a multitude of new outfits and weapon skins.

Softstar’s latest high fantasy project that focuses heavily on Chinese mythology doesn’t require you to play the previous titles in the series, but knowing where this franchise started out will allow you to appreciate this one that much more. Together Forever is a huge step forward in almost every regard from its predecessors, featuring beautiful art styles, crisp graphics, dynamic real time combat, and excellent storytelling. That being said, this game isn’t for everyone, as it comes with a level of jank seen in many non-triple-A games and isn’t like most role playing titles. Questionable design choices along with lack of accessibility options may be unappealing for some. 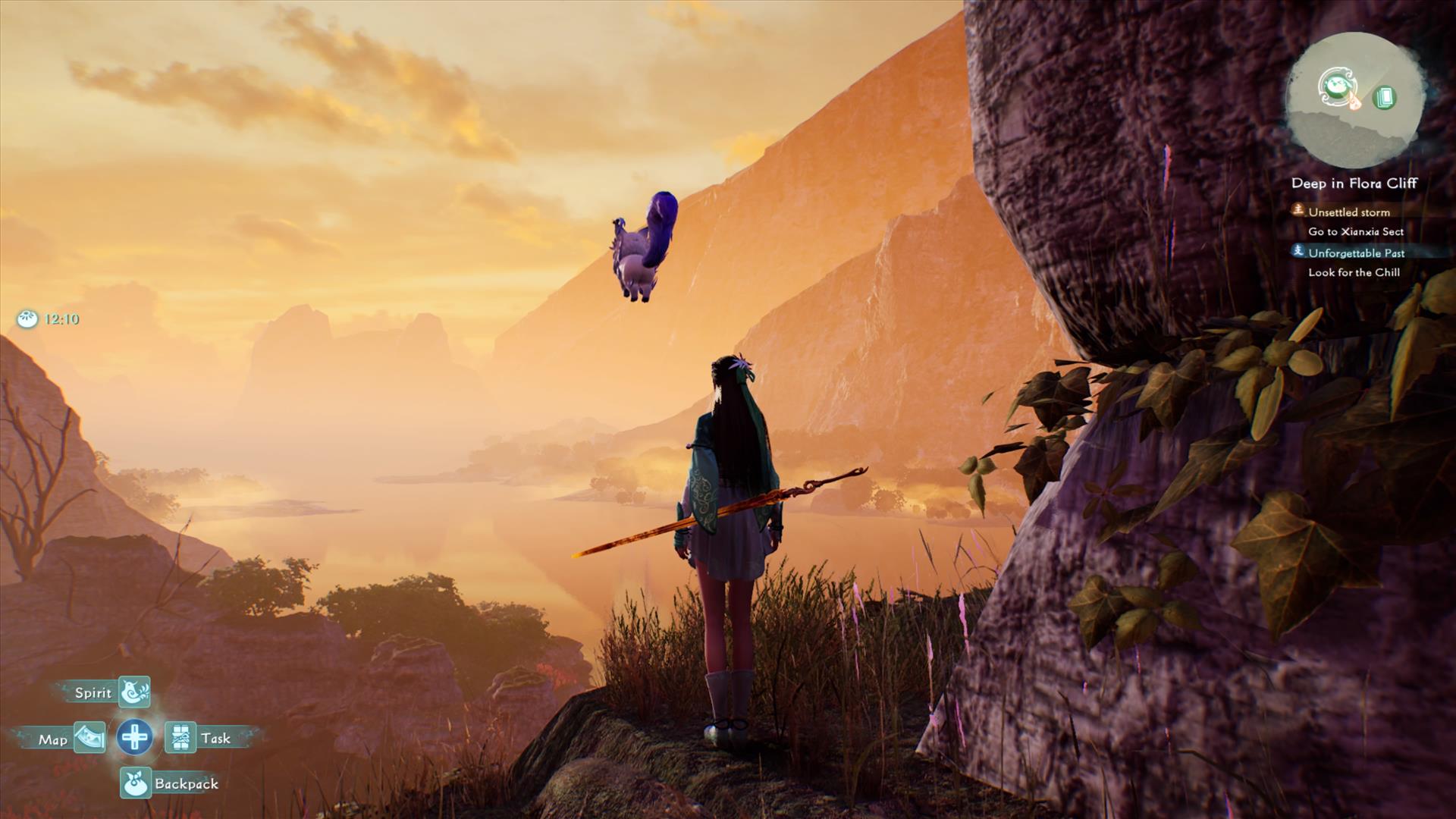 As you would expect, Together Forever plays out like a dramatized Chinese soap opera, with a political struggle unraveling between humans, deities, and demons. The deity Xiu Wu is expelled to the mortal realm after losing a battle with a powerful demon general, where he meets a human girl named Yue Qingshu. The motivation for the overarching narrative is kicked off by a divine child chosen as the reincarnation of a god who is targeted by the demons. Xiu Wu and Yue Qingshu set off on a journey to uncover the true motivations behind the deities and the demons, enlisting Bai Moqing and Sangyou into their party along the way. The story strikes a perfect balance, knowing exactly when to be lighthearted and when to be serious. It should be noted that cutscenes make up roughly half the game. These exposition dumps are essential to setting context and developing characters, but can be a turn off for those expecting more action-oriented gameplay in a role playing game. All dialogue is spoken in Chinese, but English subtitles do more than enough to help non-native speakers understand what is going on. I’m glad to see that the localization issues that were present in the PC version have been cleaned up in this one.

When this game doesn’t have you watching endless cutscenes or walking from point A to point B to trigger another one, it actually gives you some action orientated gameplay. Yes, sometimes after a cutscene, you simply walk to start another one. However, while previous Sword and Fairy games were turn-based, Together Forever features real-time exploration and combat. Levels are well designed and laid out, with villages feeling alive while open areas reward you for exploration. The occasional environmental puzzle strikes the perfect balance between brain-teasing and too easy. Boss encounters are grand and exciting, featuring unique moves and making great use of environmental objects in order to succeed. It seems like many games nowadays have adopted the mainstream favor of real-time over turn-based, but this game does come with its own depth and flavor. Every character has a dodge, light, and heavy attack. Mixing button inputs will allow you to perform different combos, while holding down the R2 button brings up a menu for your character to perform a special ability that expends mana. Summonable spirits can be recruited throughout the story, ranging from an adorable thunderbird to a ferocious ice lion. You can only control one character at a time but can switch between any on the fly while the rest of your party is AI controlled. Combat for the most part is competent, but lack of animation canceling, wonky camera angles, and janky lock-on system make it frustrating at times. 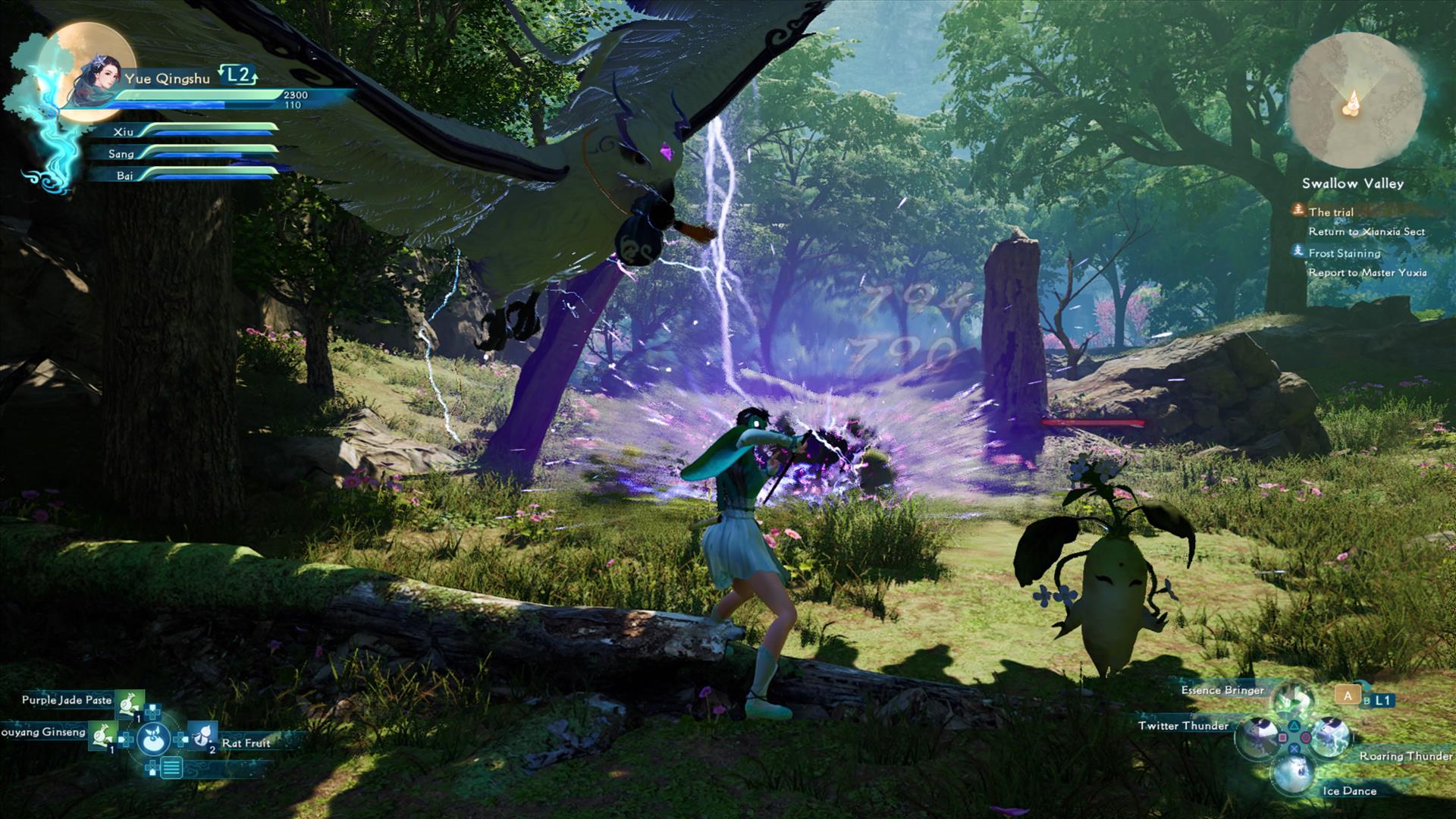 Sometimes Together Forever doesn’t feel like a role playing game at all, but instead a drawn out movie with playable sections. Your characters do gain experience points to level up and you can equip different weapons and armor for them, but the progression system seems half baked. The game’s difficulty really isn’t an issue, so there’s never a need to grind or farm, and sometimes your character's level magically jumps up as you further the narrative. It’s never made clear how to obtain different swords or outfits for your characters, so I ran through most of the game with the default ones. Your weapons can also be upgraded at the blacksmith but I never found it necessary to do so. There are side quests and mini-games aside from the main story, but never presented anything novel or interesting. Perhaps my biggest gripe with the game is the atrocious UI. On my 65 inch TV, the in-game HUD was so small that I can barely read any of it. There’s no option to resize and make it larger, or any accessibility features to make the experience more user friendly.

Together Forever excels in the visual and audio department, with graphics and music better than some I’ve experienced in bigger budget titles. The character animations are insanely smooth and detailed, and the cutscenes are well voice acted and implemented. Action heavy gameplay segments are flashy and colorful, with minimal to no frames dropped. An epic soundtrack accompanies the roughly 25 hour journey, featuring beautiful emotional piano tracks during intimate moments and compelling melodies during dramatic sequences. Given a game of this size, not every minor character found throughout the world is voice acted, and is instead text-based, but that’s totally understandable. 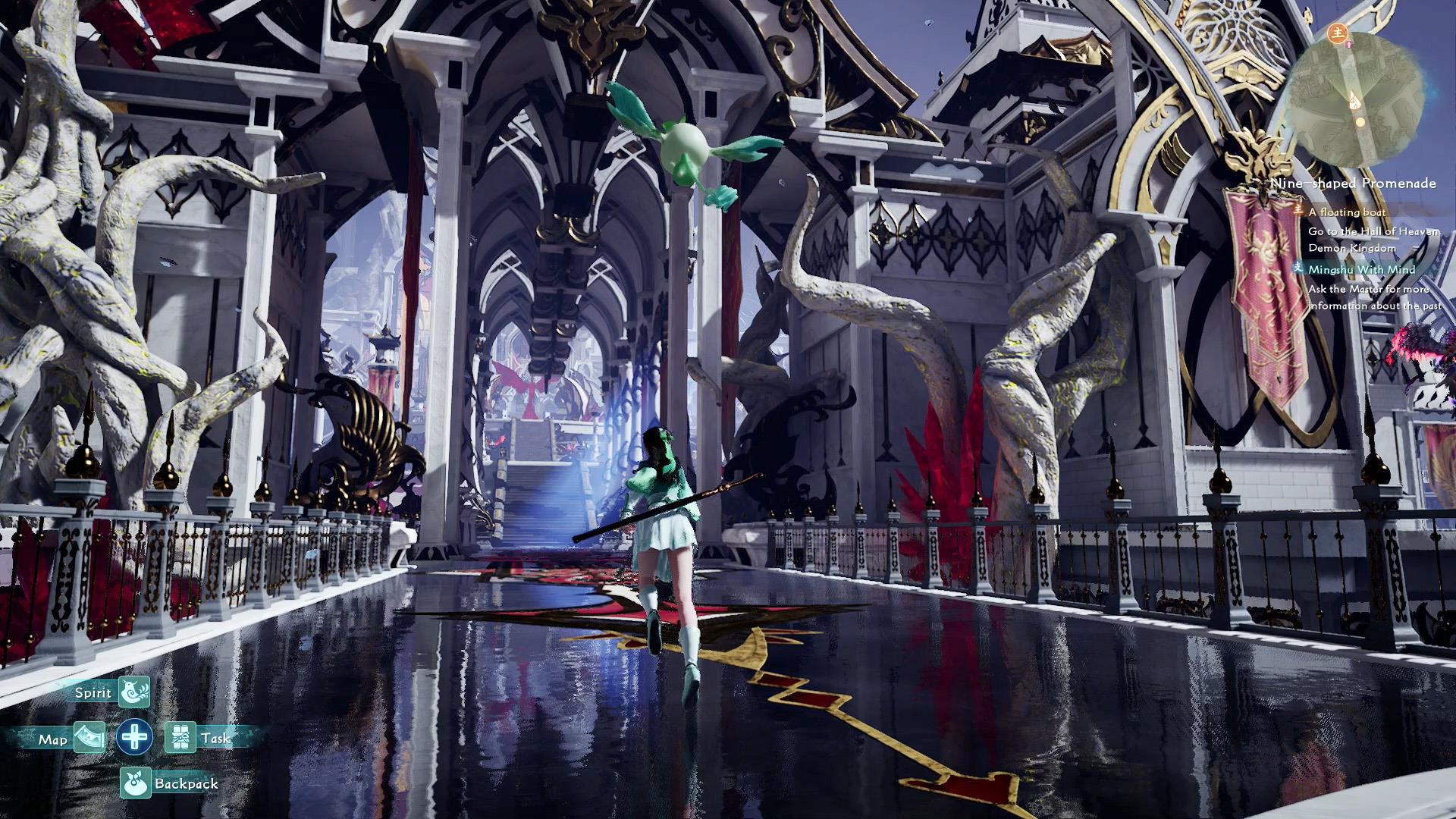 Softstar did a commendable job with the latest game in the long running Sword and Fairy series. It’s a shame that Chinese role playing games are overshadowed by the oversaturated market of Japanese role playing games, but it is nice to see developers still continuing to develop them. Together Forever is an excellent console port. It irons out many of the gripes and issues that players had, such as poor optimization and localization. Still, the game speaks to an extremely niche market, but nonetheless is worth checking out for anyone interested in Chinese mythology and action oriented games.

Sword and Fairy: Together Forever is a gorgeous and engaging Chinese high fantasy role-playing game that deserves more attention from the West. Localization and technical optimizations have been implemented since the game’s original release on PC, making this console port the best way to experience this game. The vast number of cutscenes and depth of lore may be off-putting for some, but those willing to give this title a chance will not be disappointed. Sword and Fairy is a game that should be viewed through its own lens, without the comparisons to Japanese role playing games, and only so will this franchise truly be appreciated.