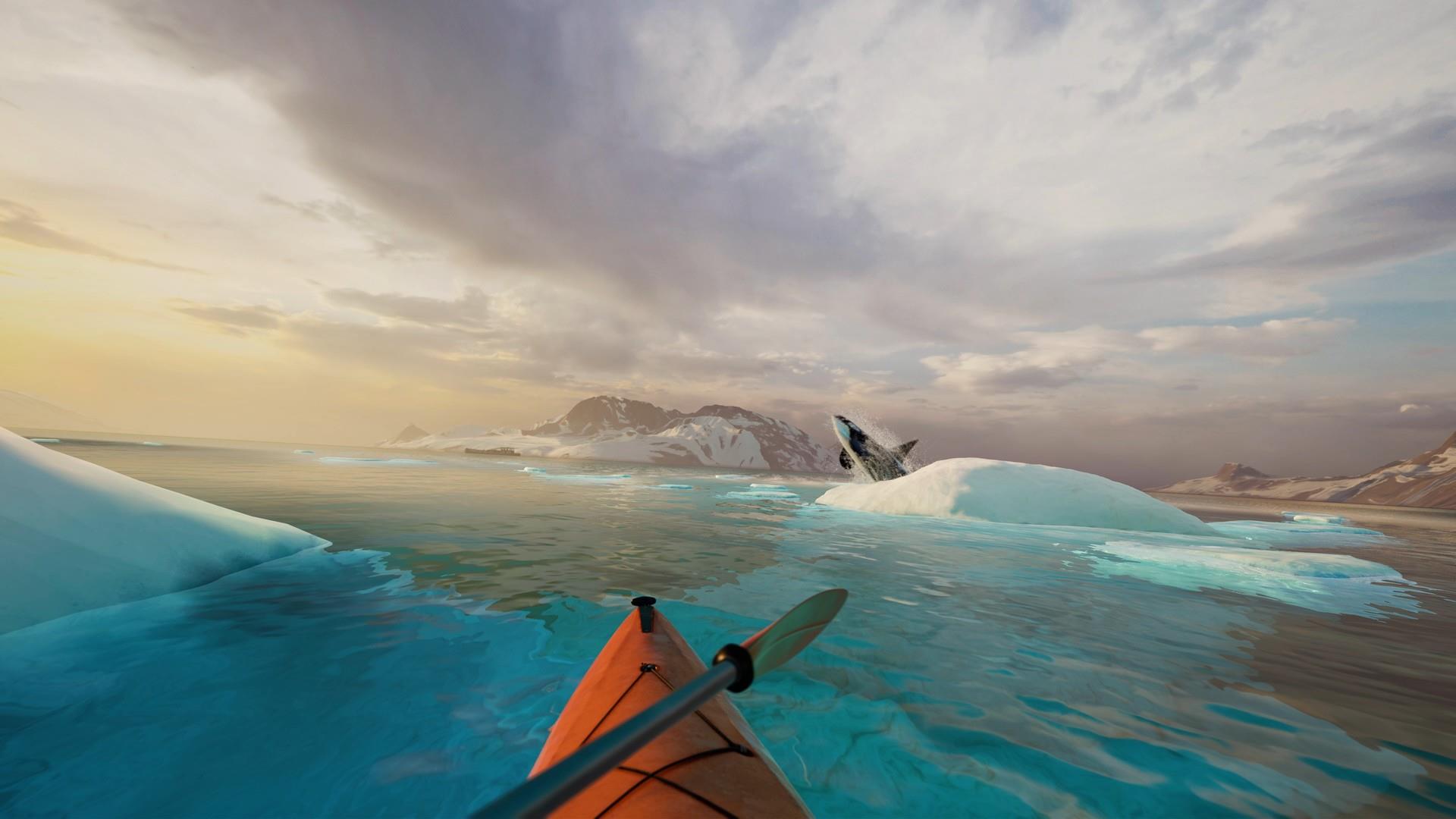 When I was a kid, if people wanted to take a small craft down a river, we hopped in a canoe; my childhood predates the current era, when every tech worker and banker has a kayak in the garage. As a boy scout in the 70s and 80s, I did spend quite a bit of time canoeing down rivers, so I have a basic understanding of how rowing works with a current. And that’s why I’m so damned impressed with Kayak VR: Mirage, a new VR title that plops the player (and their kayak) onto some of the most scenic waterways in the world.

Kayak VR is almost certainly the most realistic VR game I’ve played. By restricting itself to a very strict set of interactions – a double-sided paddle, water, and the rocks and ice surrounding your little vessel – the development team at Better Than Life were able to go deep on the physics, allowing the player to have a visceral experience that delivers everything but the spray of water in your face. 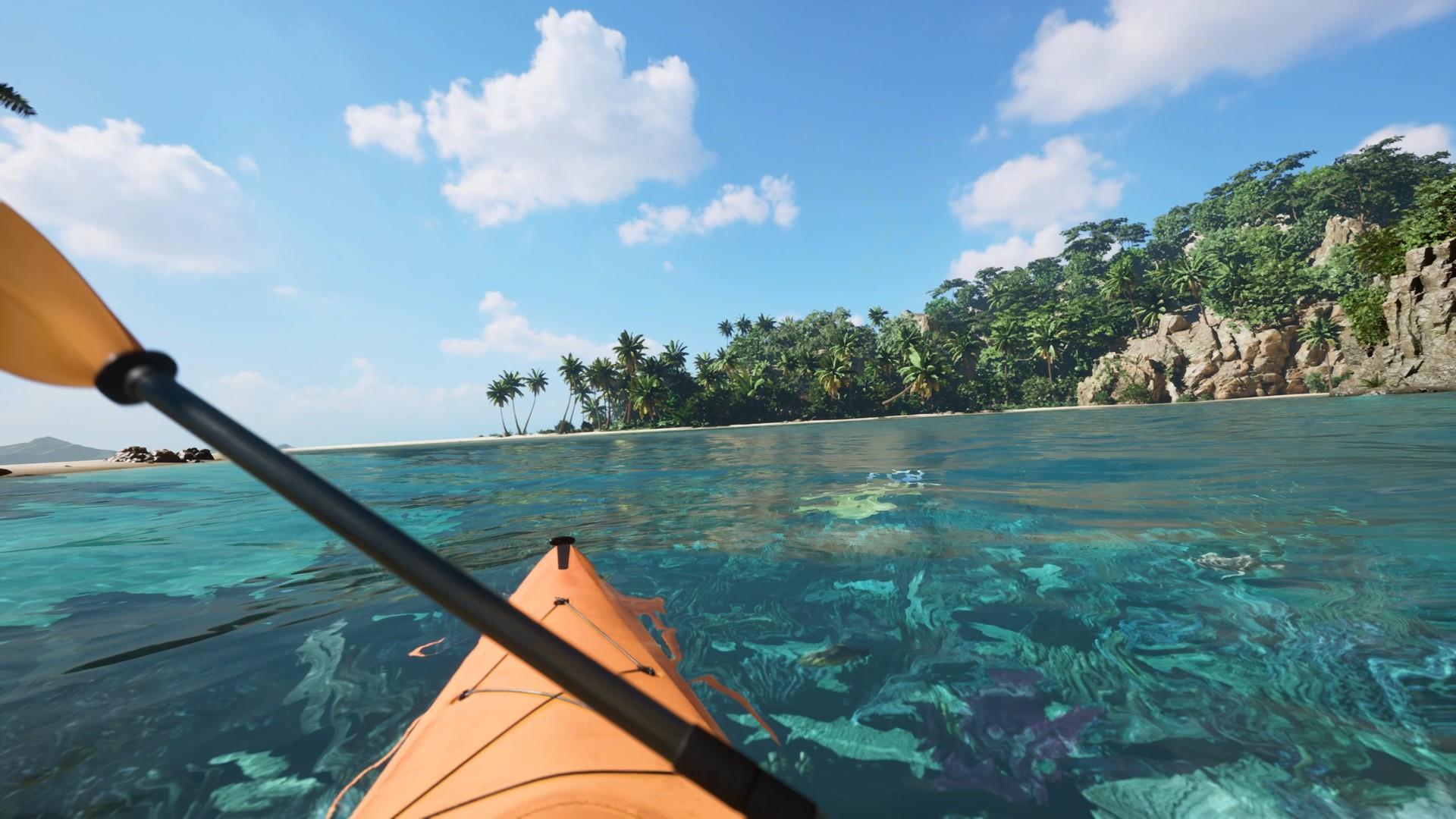 The water in this game is some of the most impressive I’ve ever seen; I spent a few minutes just plopping my paddle into the water and looking at the splashes it made and I saw nothing that looked anything less than natural. The water in Kayak VR flows exactly how you would expect it to in real life, which really sells the illusion that you are maneuvering through real waterways. Even the fish swimming around your boat seem to be in sync with the rhythm and flow of the water and rocks.

Kayak VR: Mirage is ostensibly designed as a racer, but I’ll be brutally honest here: I have almost no desire to master the racing in this game. Much credit to the folks that toiled away for endless hours getting the advanced racing features to function. I tried it out, and indeed you can race against the ghosts of your friends and other players, trying to top each other’s times asynchronously. But that is not where my interest lies, as the world of this game does nothing to inspire my competitive spirit (and I was appalled at how fast the game expected me to go, even on the easiest races). 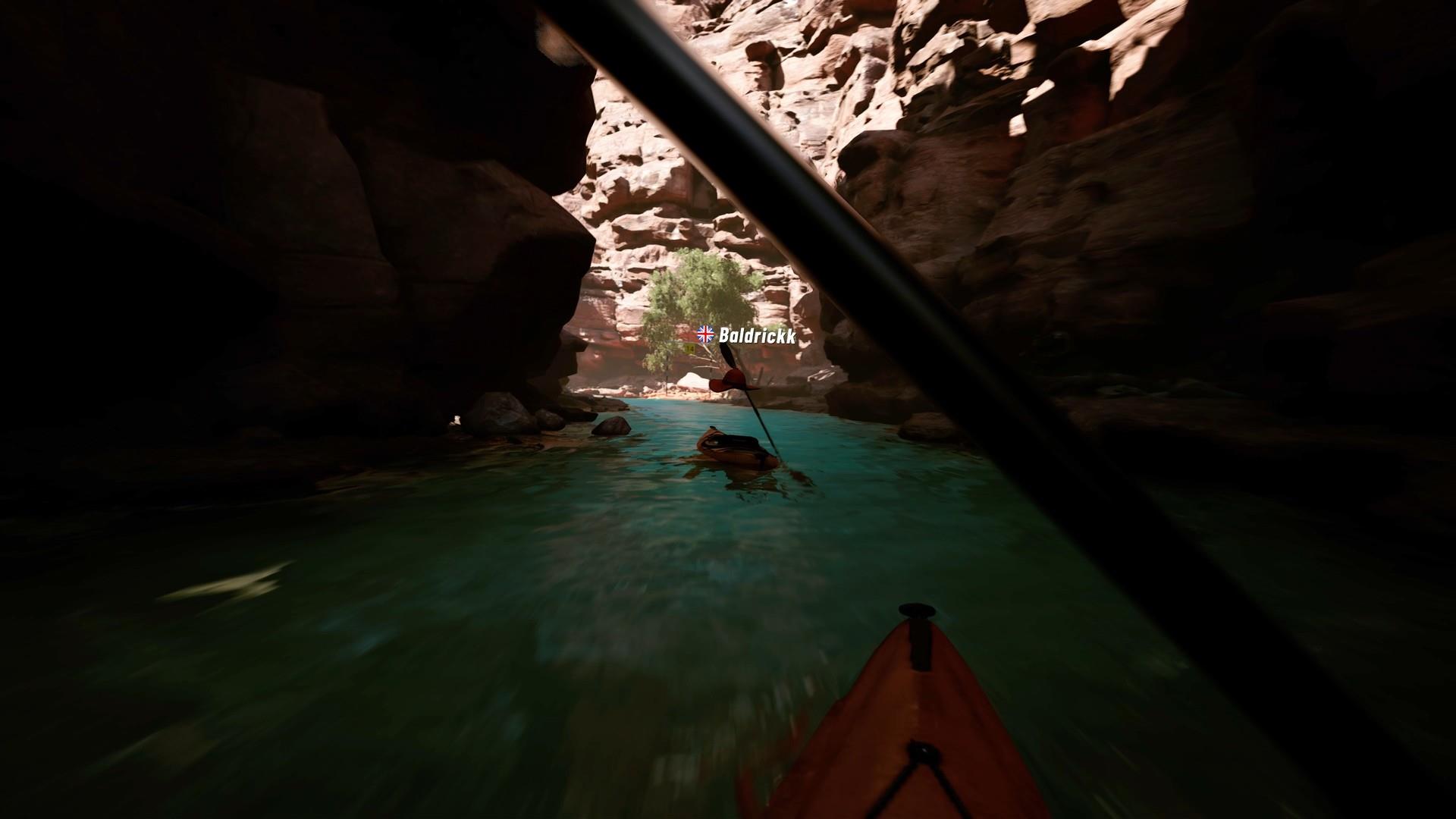 I am much more excited about paddling slowly and happily around in the beautiful environments created by this dev team, lazily creeping along at a snail’s pace and appreciating the near photo-realistic biomes at my own pace. The very first time I loaded into Kayak VR’s Costa Rica level, I immediately set out to the open sea, just to see how far I could get (spoiler: pretty far, but not far enough to reach that distant island).

I spent a good hour drifting along with the current in a canyon in Australia, just using my paddle to occasionally give myself a little forward momentum or to push off rocks when I got to close to the shore. I sat in silence in a bay in Antarctica, just bobbing on the water and looking up at the northern lights. And I made myself a little bit seasick, fighting a storm off the coast of some towering fjords, with the waves battering me about and lightning blazing across the sky. These are the experiences that sold this game for me. Let others race; I want to explore. The fact that this game allows both of these approaches speaks well to the forethought of the team behind it. 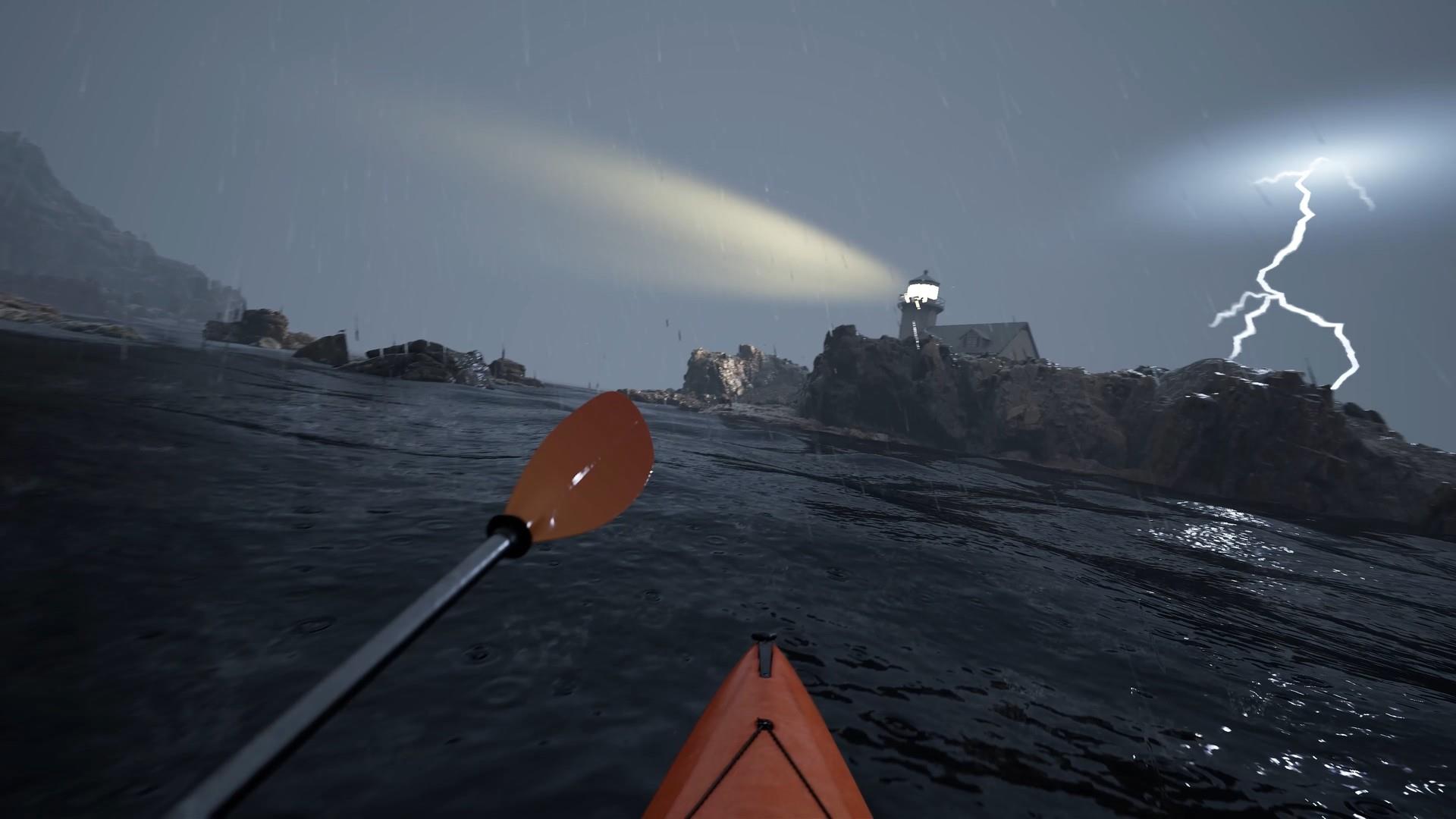 The developers took the time to add some realistic moments to the game. I laughed out loud when I tried to sail right through a log that was downed across the river at one point and bounced off of it; you actually have to duck to get under the thing. I also got a kick out of the animal life surrounding me; fish swimming along side my kayak, a dog barking on a rock, birds sailing far overhead. All of it adds to the spectacular sense of realism Kayak VR: Mirage delivers.

One look at the screenshots and trailer accompanying this review can tell you that this is a spectacular looking game, but flat images can’t really do Kayak VR justice. When you see these places in VR, they are jaw-droppingly beautiful. The development team at Better Than Life really sells the scale and wonder of these environments. This is one of those games that can showcase to non-believers just how far VR has come in the last few years. 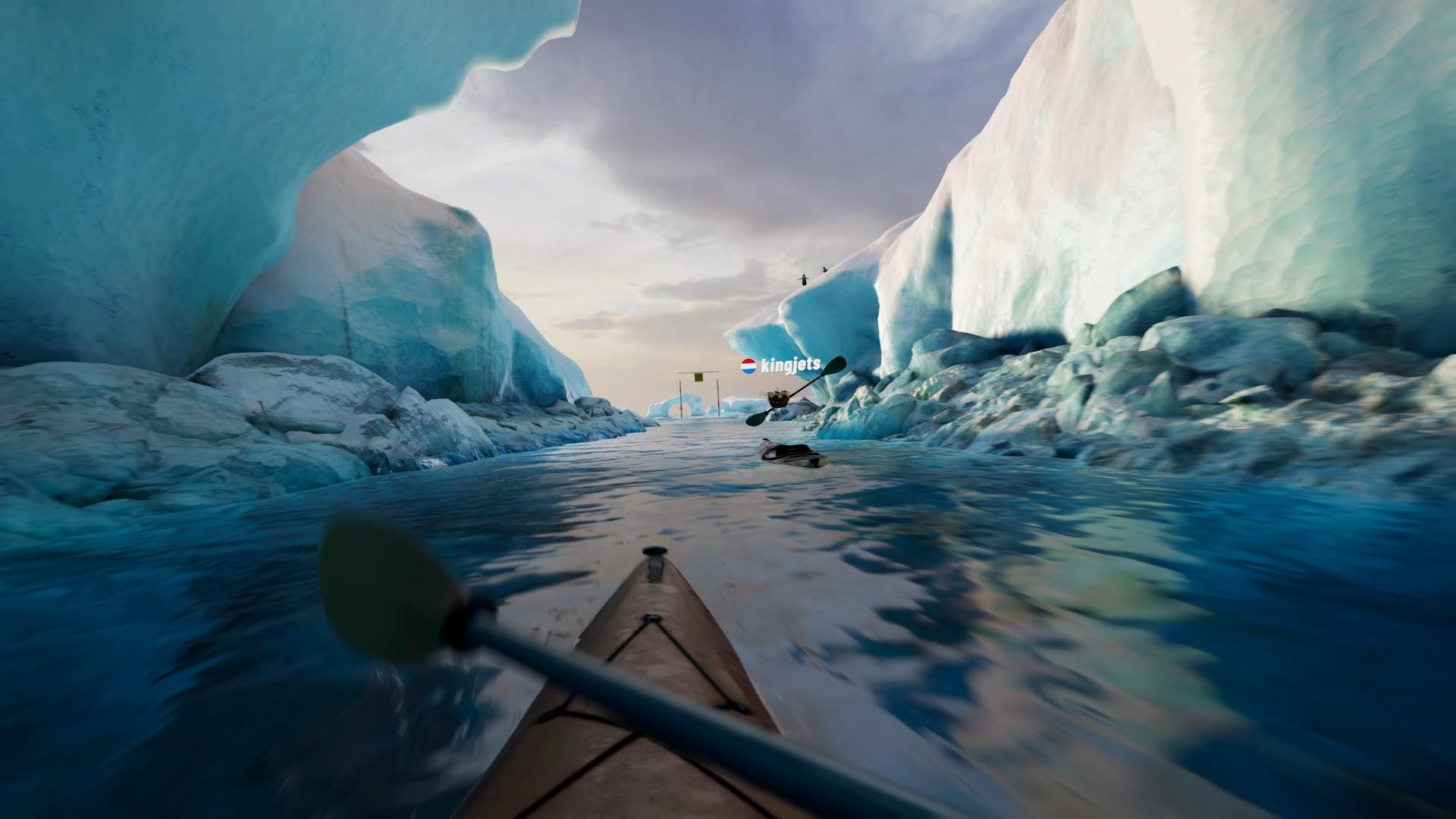 Controlling Kayak VR is beyond intuitive. Each controller represents a hand that is holding your paddle. It takes zero time before your body just starts making the rowing motion – you already know what to do before you start doing it. That said, I did find that with a little practice I was able to stabilize my motion and create deep, smooth strokes. I was a little over-energetic at first, and I found that precision worked far better for me than flapping about.

I’ve seen videos online of folks playing Kayak VR with various instruments substituting for the paddle. One guy seemed to have taped his controllers to a broomstick. Another had some sort of official-looking peripheral that locked his controllers in place. Neat stuff, but I did just fine with pantomime, moving my arms in a cycling motion and pretending I was holding a stick. Kayak VR didn’t seem to mind, and watching me gave my son a good laugh. 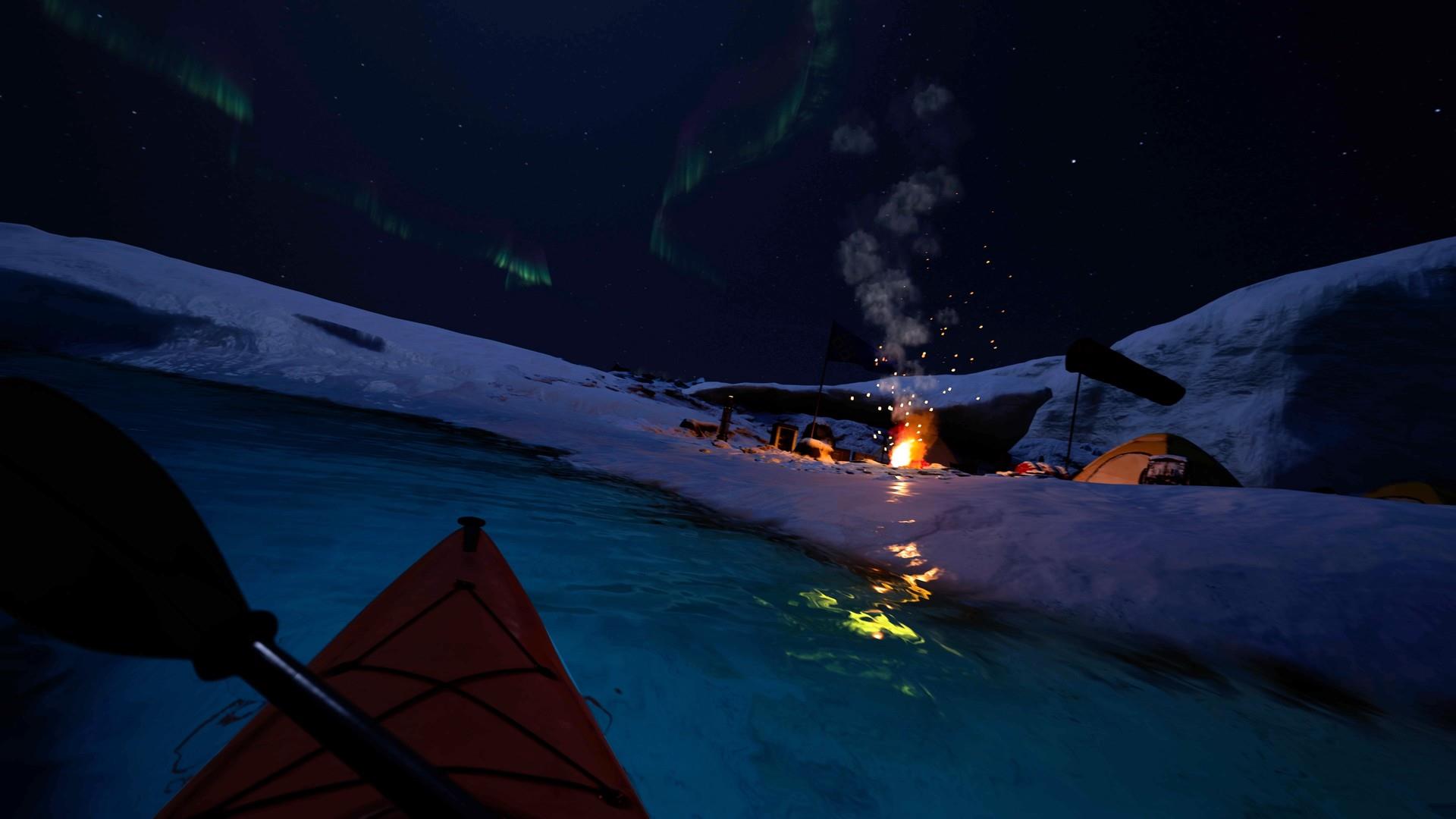 There is no question that Kayak VR delivers a pretty good workout. Not as good as actually rowing a boat, mind you, but sitting in place and constantly moving your arms in the same repeated motion will have you a little sore the next day. I found that while I tend to drift on rivers, I also tend to go hard on open water, which can actually lead to a little huffing and puffing. For someone with bad knees, any way to get exercise is pretty welcome, and I imagine that those that go hard on Kayak VR’s races will get a good workout.

In addition to the races and the free roam mode, Kayak VR also offers a nice little in-game store that allows players to trade the games currency – the number of miles you’ve rowed – for skins and funny hats to wear in multiplayer. The devs took the time to hide little challenges around the various environments that will grant you some free milage, and its fun to putter around trying to achieve them. 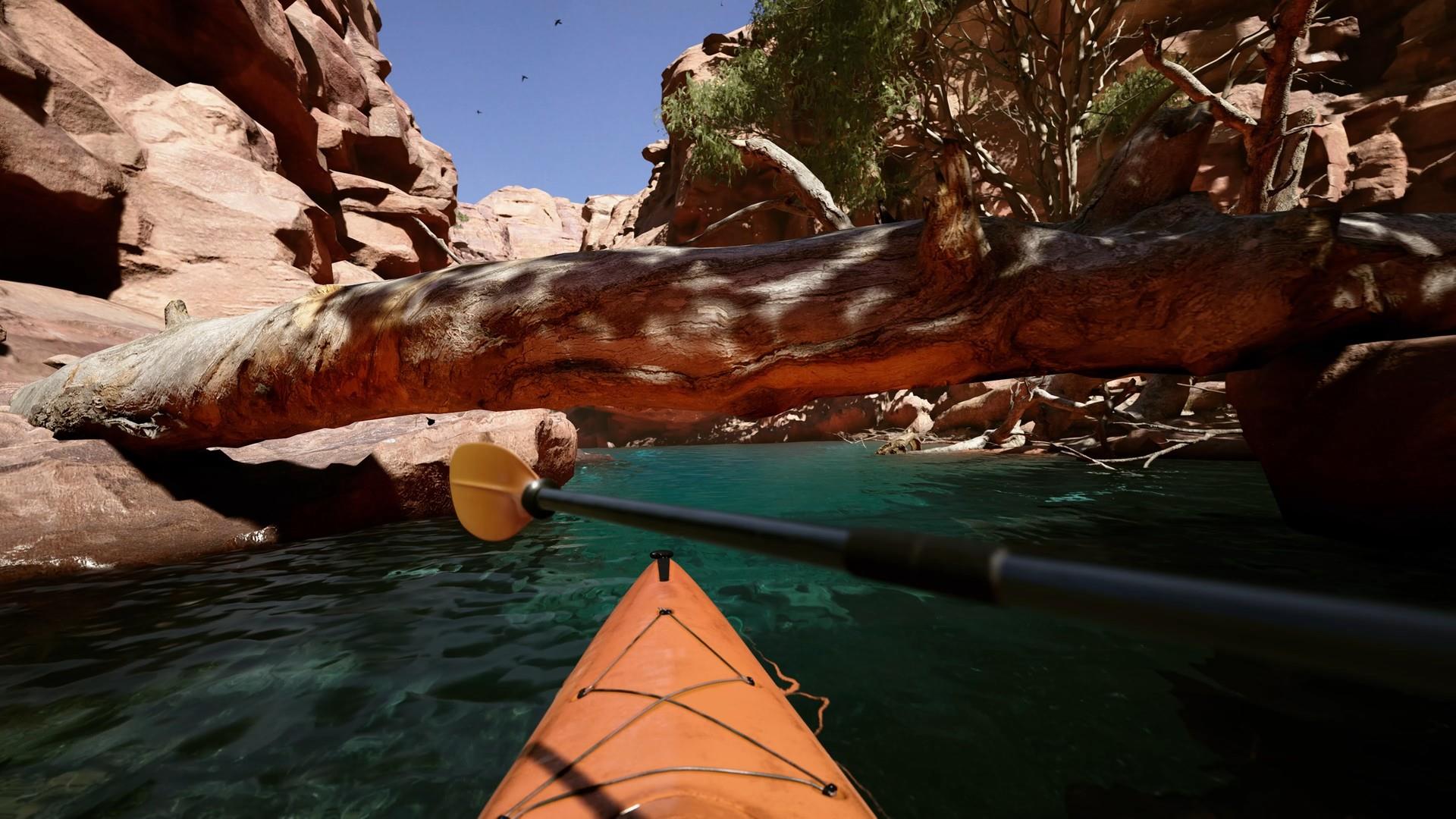 As much as I’ve been enjoying my time with Kayak VR, I do need to note that I’ve been having some technical issues with the game. I’ve experienced several crashes during loading that have forced me to shut down my Quest 2 and Steam VR. This only seems to occur after I’ve successfully loaded one environment and am trying to transition to another. I’ve also seen some pretty severe frame drops upon loading a new environment, but those seem to settle down after a few moments. As this game was developed by a very small team, I think it is appropriate to give them the benefit of the doubt when it comes to fixing things like this, but it is worth noting that the experience upon release is not without some problems. I would expect a patch in the near future, as this team is very open with their roadmap, taking user ideas and feedback into account.

I play VR games to get out of the house and experience new things; I love to visit different worlds from the privacy of my bedroom. It is a fantastic privilege to be able to hop into a kayak on my lunch break and cruise around places of natural beauty that I will never be able to visit in real life. Kayak VR has so much potential for the future, as hopefully the game is successful enough to allow the development team to create new environments to visit (and yeah, sure, race through). I can’t wait to see where this game takes me next.

Kayak VR: Mirage delivers one of the most realistic VR experiences I’ve seen, setting a new benchmark for visual fidelity and water physics. The four environments in the game feel like real places, and the control over your vessel is perhaps the best simulation I’ve experienced. While racing is available (and will appeal to many), simply exploring the environments is amazingly rewarding. Some technical issues mar the experience somewhat, but this is still a game that every person with the tech to run it should buy immediately.