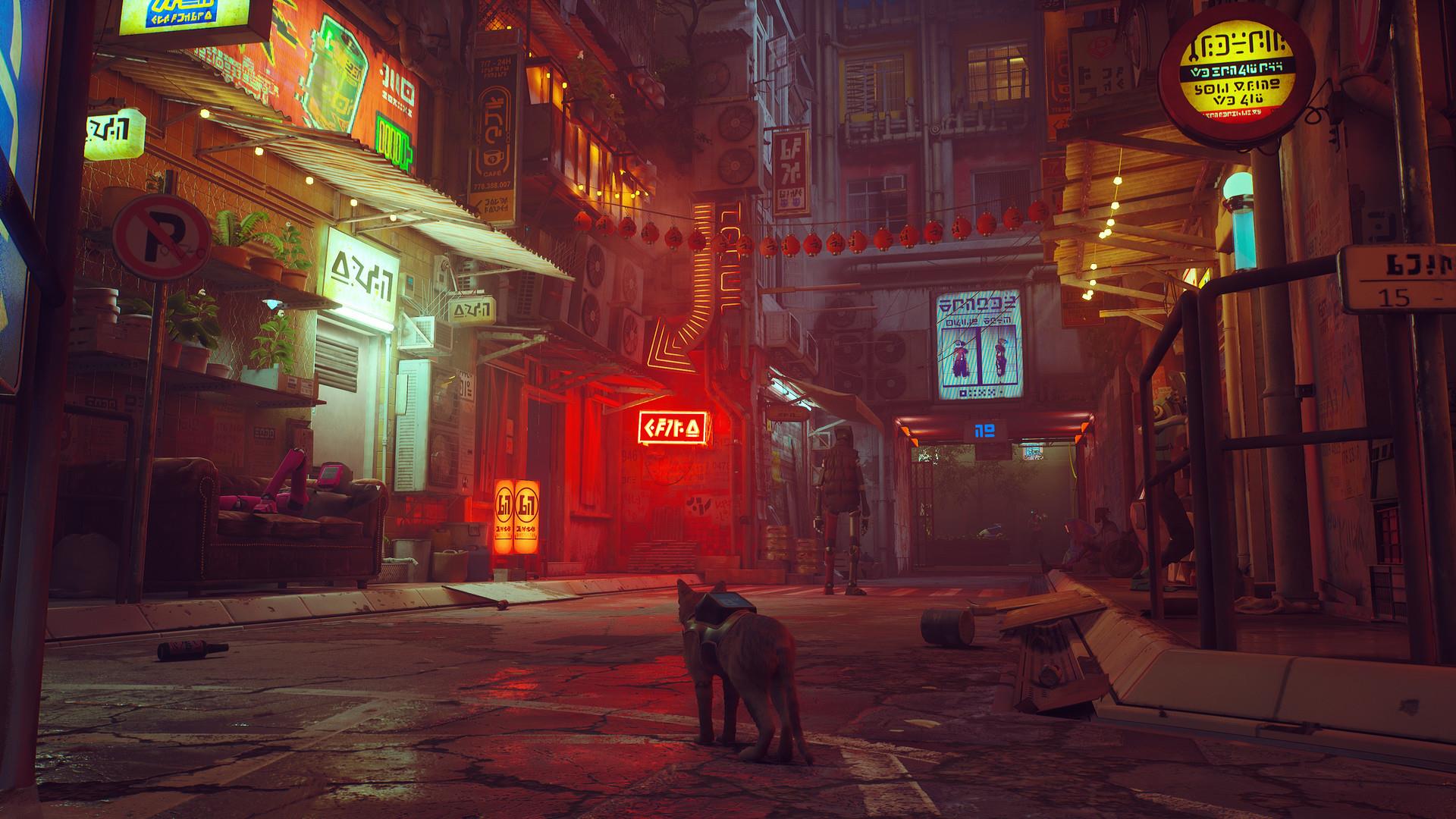 Refreshing and innovative concepts in the gaming industry have become increasingly rare, with many projects recycling ideas or taking heavy inspirations from existing titles. The up and coming catalog of indie games slightly mitigates this staleness, but one game in particular redefines expectations in the purrfect way (editor's note - Boooooo!). This is none other than Stray, the third-person adventure game where you play as a stray orange tabby trying to find its way back home in a dystopian cyberpunk city. Originally announced back in 2020 during the PlayStation 5 console reveal, the debut project from indie developer BlueTwelve Studio has been in development for the past seven years.

Stray is a game that is like no other. It is a unique experience that takes you through some visually stunning set pieces and an emotional narrative adventure, all  with you padding along in the paws of an adorable nameless feline protagonist. The journey begins with you and three other cat buddies as you go about your day, doing normal cat things. A loose pipe and a failed jump land you in a hole, separating you from your family and injuring you in the process. You awaken in a neon-soaked undercity inspired by Hong Kong’s Kowloon Walled City, with no apparent way to get back up to the surface. A typical stranger in a strange land situation, but one that dives deeper down the rabbit hole. Not to fret though, as you soon stumble upon a cute little robot drone named B-12 (an obvious easter egg referring to the developers themselves) that serves as your trusty companion for the rest of your journey.

World building is incredibly important in a game, as the world entices the player to become more invested with the intricacies and lore that surround it. BlueTwelve Studio does an excellent job with the pacing of the story, as snippets of the mystery revolving around the undercity are uncovered as you progress. Stray takes place in a post-apocalyptic society, where remnants of humankind are scattered about, but humans themselves have ceased to exist. Instead, the world is occupied by robots known as companions with computer monitors to show their facial expressions. Rat-like cyclops blob creatures known as Zurks plague the undercity, gnawing away at just about everything, and totalitarian Peacemakers and Sentinels patrol the alleyways, busting anyone that goes against the law. Where have the humans gone? Why is the city underground? There’s more to figure out than how to get back home. Stray serves up a heart-wrenching story that will pull on your emotions and force you to think about the bigger picture. Themes of friendship, betrayal, and even politics are touched upon.

The concept of playing as a cat alone is enough to make Stray stand out among other games, but it is BlueTwelve Studio’s immaculate attention to detail that truly clobbers the game out of the park. As a cat owner myself, I couldn’t help but chuckle when I discovered you could pretty much do everything a cat would do in real life: knock over delicate vases and bottles, scratch couches and walls and nap in dedicated snuggle corners. You can meow on demand with a click of a button, and hear it through the DualSense controller’s speaker. Heck, you can even rub up against the legs of the robot companions you meet along the way! Playing as an animal, or even seeing another animal, in a game can be a hit or miss, with visuals looking janky or mechanics not being accurate enough. In Stray, you genuinely feel like you are playing as a cat, right down to the habits and tendencies of these beloved four legged creatures. The one that got me the most was the big stretch after a nice long nap. 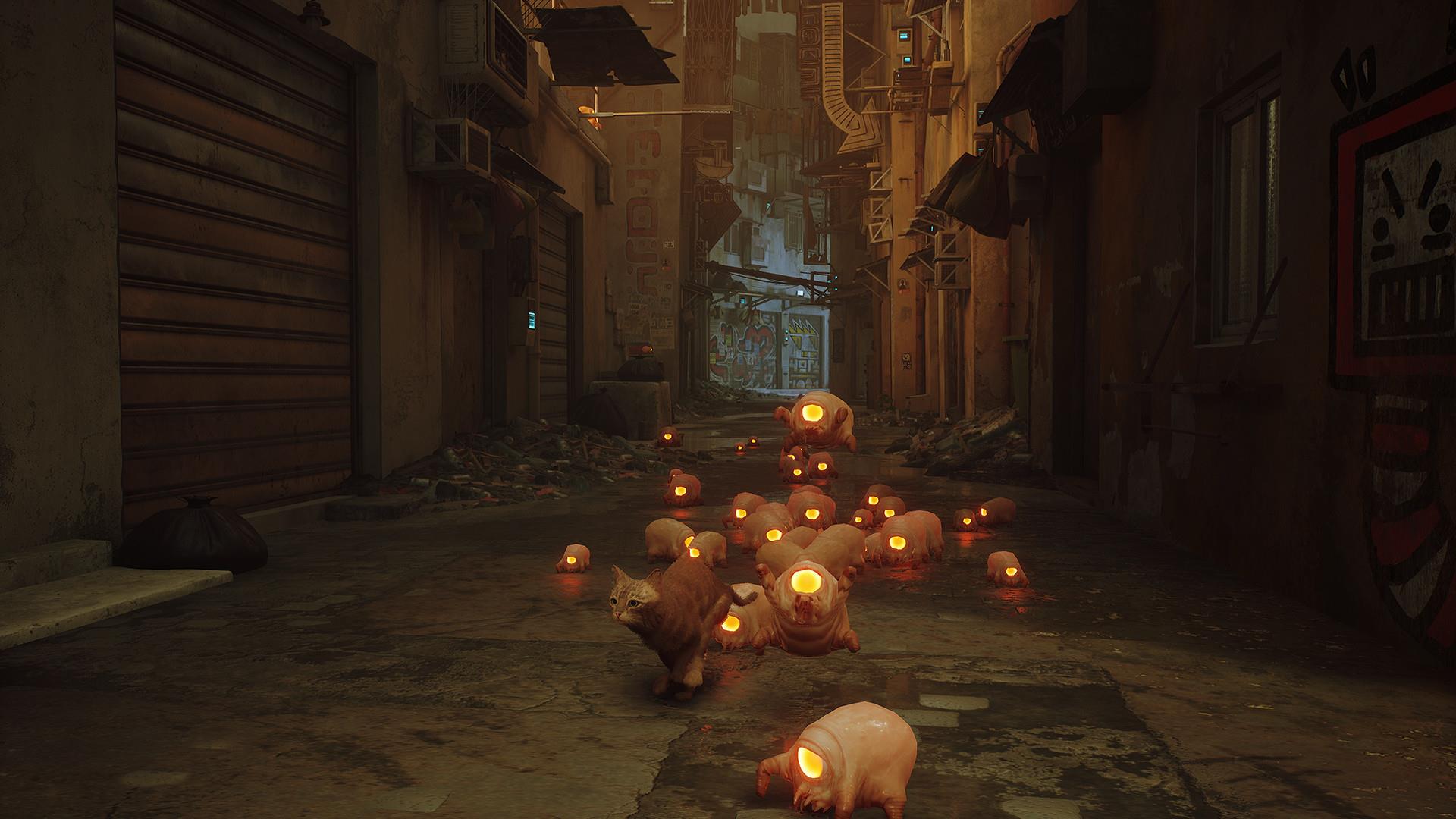 Stray is a mostly linear game with snippets of open world exploration sprinkled in. It is divided into twelve chapters, with a rough completion time of five to six hours on your first playthrough. Trophy hunters and completionists can expect more with collectibles and achievements, including one that requires you to complete the game in under two hours. It’s not a terribly long or short game, but one that finds the right balance between dragged out and rushed. The ending was a bit anticlimactic, but emotional nonetheless. I do hope that the developers continue to expand on the world that they built in Stray because it is filled to the brim with legends and stories and would be a shame if it ended here.

Another way BlueTwelve Studio nails it in the immersion department is with the gameplay mechanics. Stray’s gameplay can best be described as a mix of platforming, puzzle solving, and cat-like combat. You are running on all fours, jumping on ledges, climbing on ladders, and scratching on sofas. Puzzles often require you to think like a cat and use environmental clues around you to solve them. They were never too obtuse and achieved the right level of difficulty. One such example is one where you have to push a bucket of paint off a ledge to aggravate a resident into opening their door. It’s silly but one that really drives the point home of: “what would a cat do?” or “because you’re a cat.” Combat isn’t truly combat per-se, but there are sections containing chase sequences, stealth sequences, and luring enemies into traps. Some puzzles are multi-stepped so exploration is encouraged, but that shouldn’t be a problem because cats love to explore! 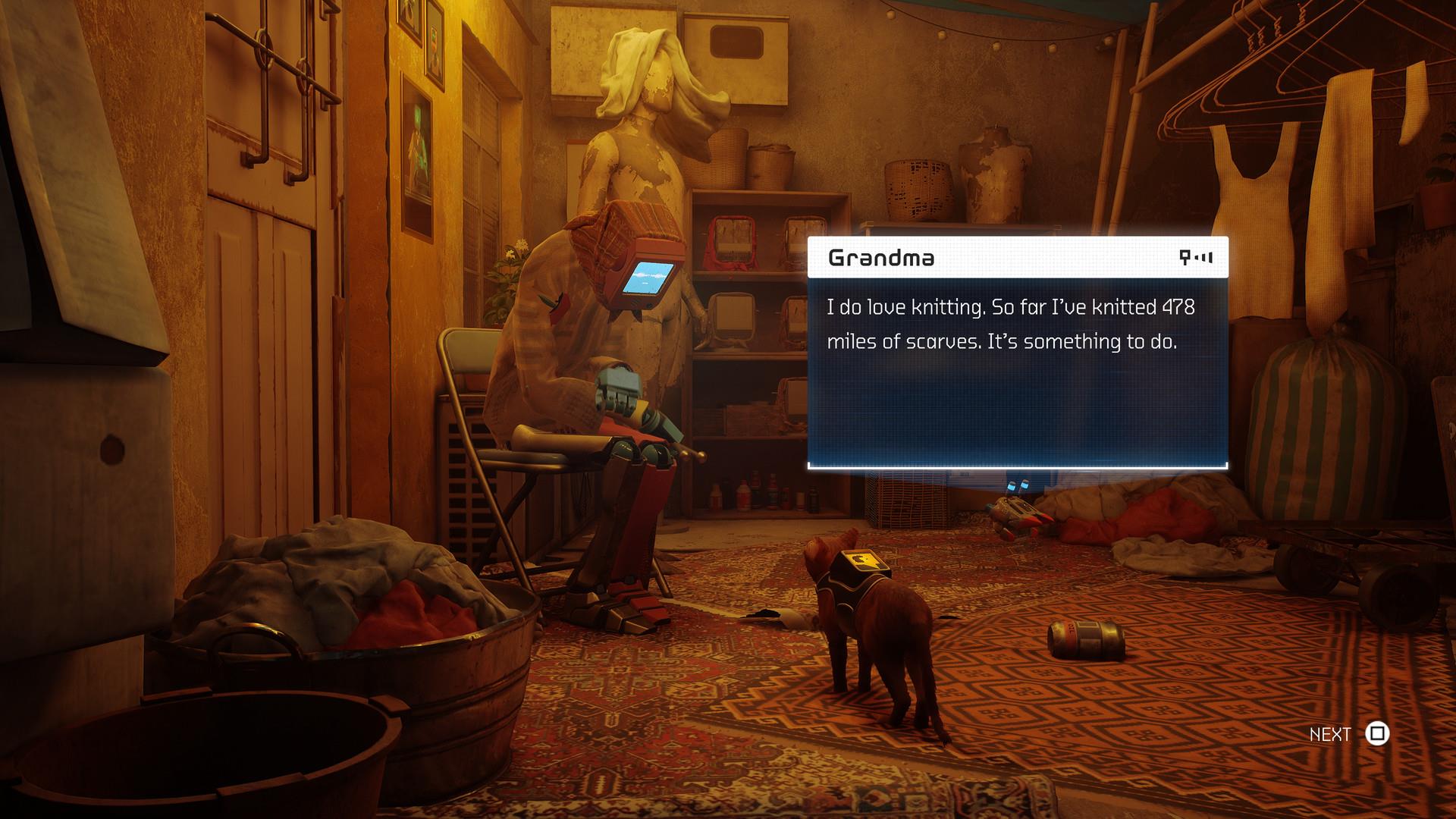 Playing Stray on the PlayStation 5 is buttery smooth, thanks to a stable 60 frames per second. There are certain sections of the game that have frame drops and random clipping issues but the game performs excellently for the most part and is entirely bug free (other than those pesky Zurks of course). Of course, it’s always appreciated that the DualSense controller features are utilized with speaker integration, rumbling, and adaptive triggers. Who doesn’t want to feel the tension in the triggers as you scratch a wall or hear the gentle purring that comes out of the controller speaker? These are small details, but they go a long way for the overall user experience. The visual and audio quality for a game of this budget is simply amazing, with highly detailed textures that are further emphasized by the neon lit streets and a soundtrack that sets the right mood in every setting. One of my favorite side activities is to snuggle up and sleep next to a robot that plays songs from music sheets I picked up.

Stray is a little gem of a game that will remain forever in the hearts and minds of those who decide to give it a chance. I know for sure it will in mine. BlueTwelve Studio managed to create an incredible world, deliver a compelling story, all from the eyes of a four legged purring machine.

Stray is more than just a cat simulator; it’s a love letter to cats and cat owners alike. It is an absolute spectacle from beginning to end, with a heart wrenching narrative and enough cat-centric puzzles to have you meowing for more. BlueTwelve Studio did an immaculate job bringing this project to life, immersing you in a dystopian world filled to the brim with mystery, all the while making you truly feel like an adorable feline. We need more games like this in the industry, ones that stand tall on their own and don’t bank on the success of their inspirations.