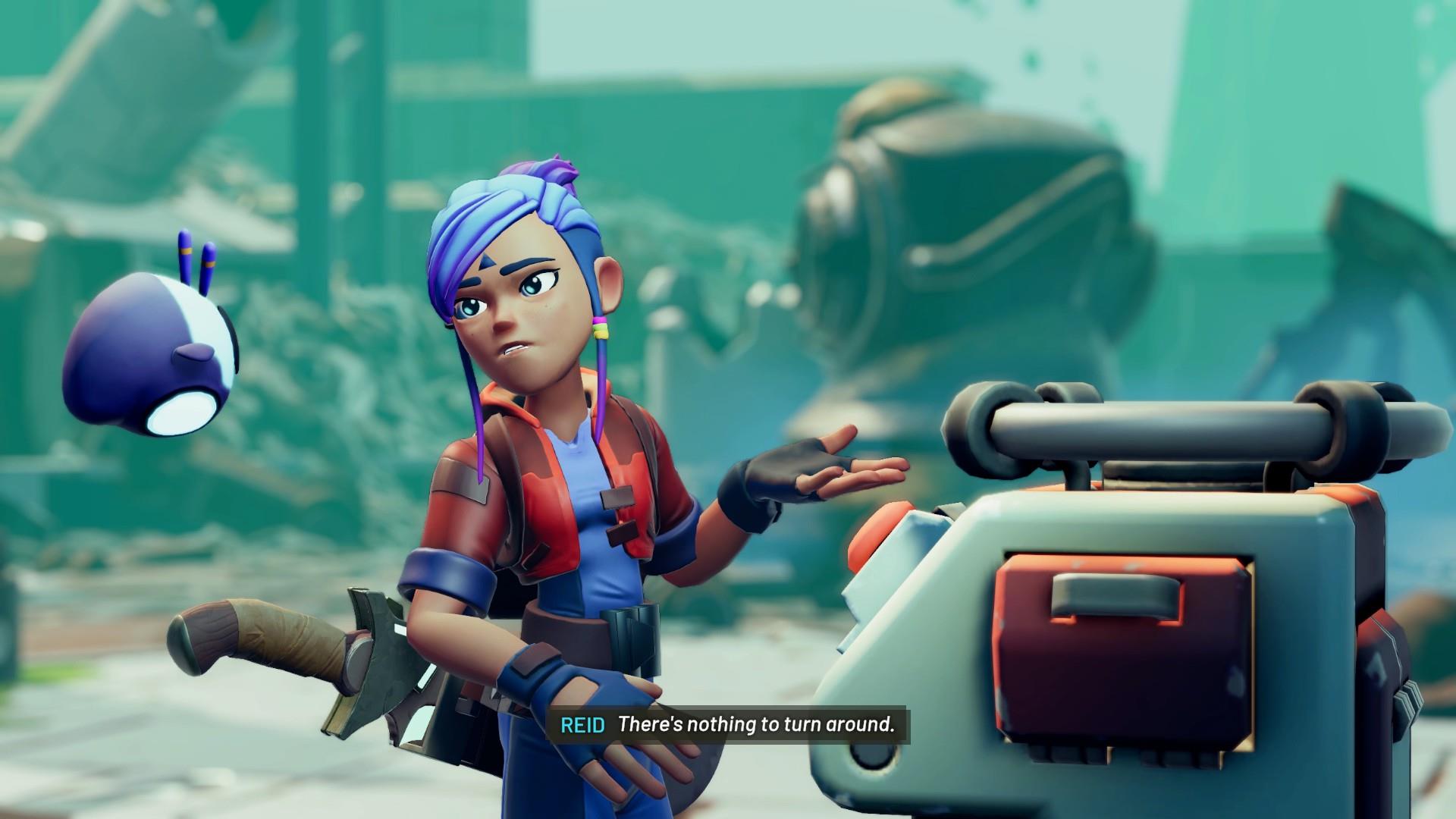 I’ve been a fan of The Legend of Zelda for around thirty years. I've always enjoyed the format of the early games - the top-down views, and the exploration of Hyrule to your hearts content, trying to uncover whatever secrets you can find. A lot of games have taken inspiration from those early titles over the years and I’ve always been a fan of games in that style. If it isn’t broke, don’t fix it. However, these days you need to do a lot more than just copy and paste what an existing game does; you need to do something else to make it stand out. 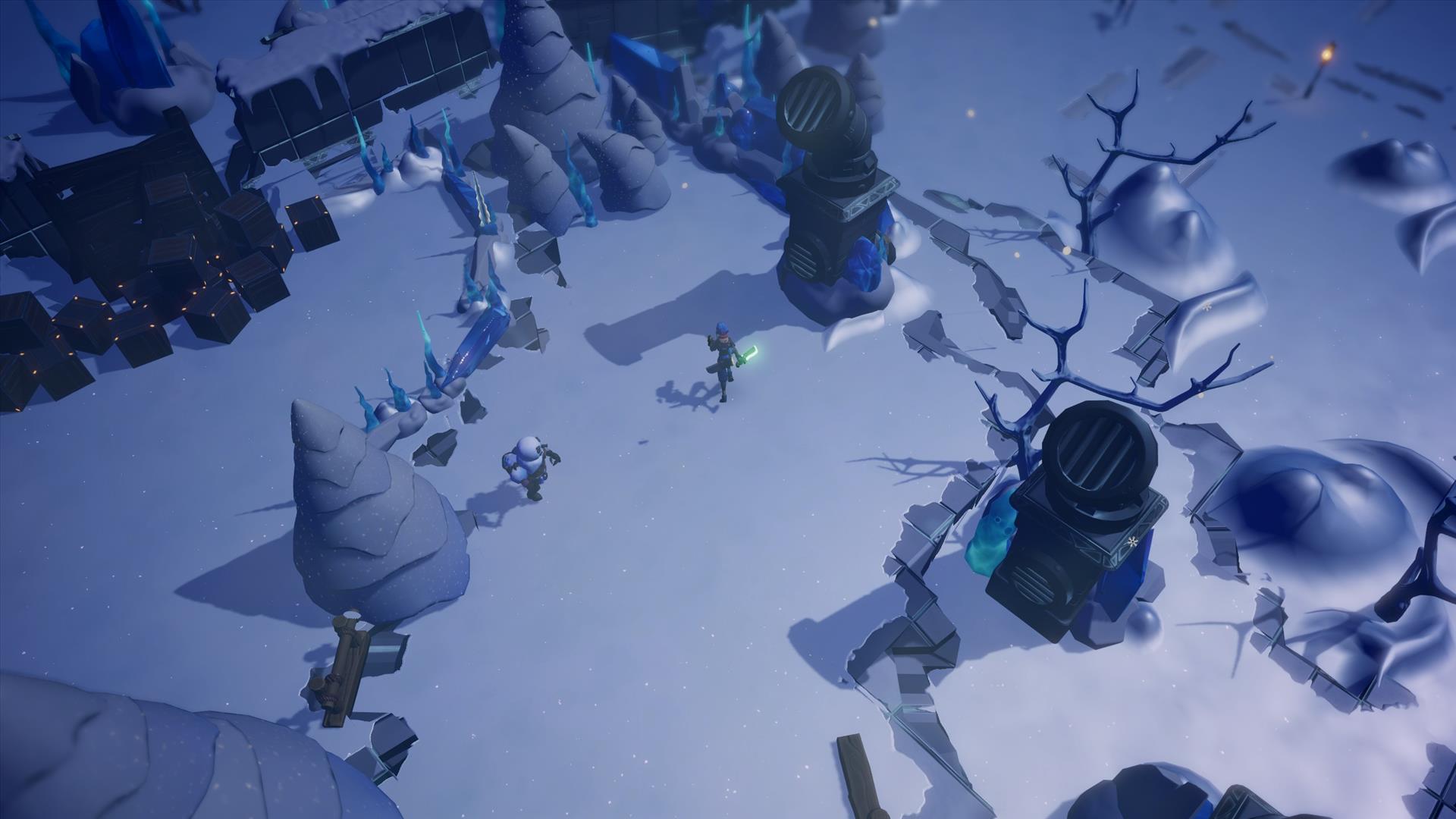 XEL begins with a young girl crashing onto a planet and having a bit of typical videogame memory loss.  A robot named Chap explains to the girl (who later is given the name of Reid so I’ll just use that for the rest of the review) what happened to her ship, and that she needs to find something called XEL.  After wandering around and finding a blade and encountering some of the not-so-friendly robotic locals, she runs into a boy named Desmond who takes her to the town of Needle Eye where she meets with the town elder. Between the two of them, the players begins to get an understanding of what XEL is and the adventure you're about to go on. 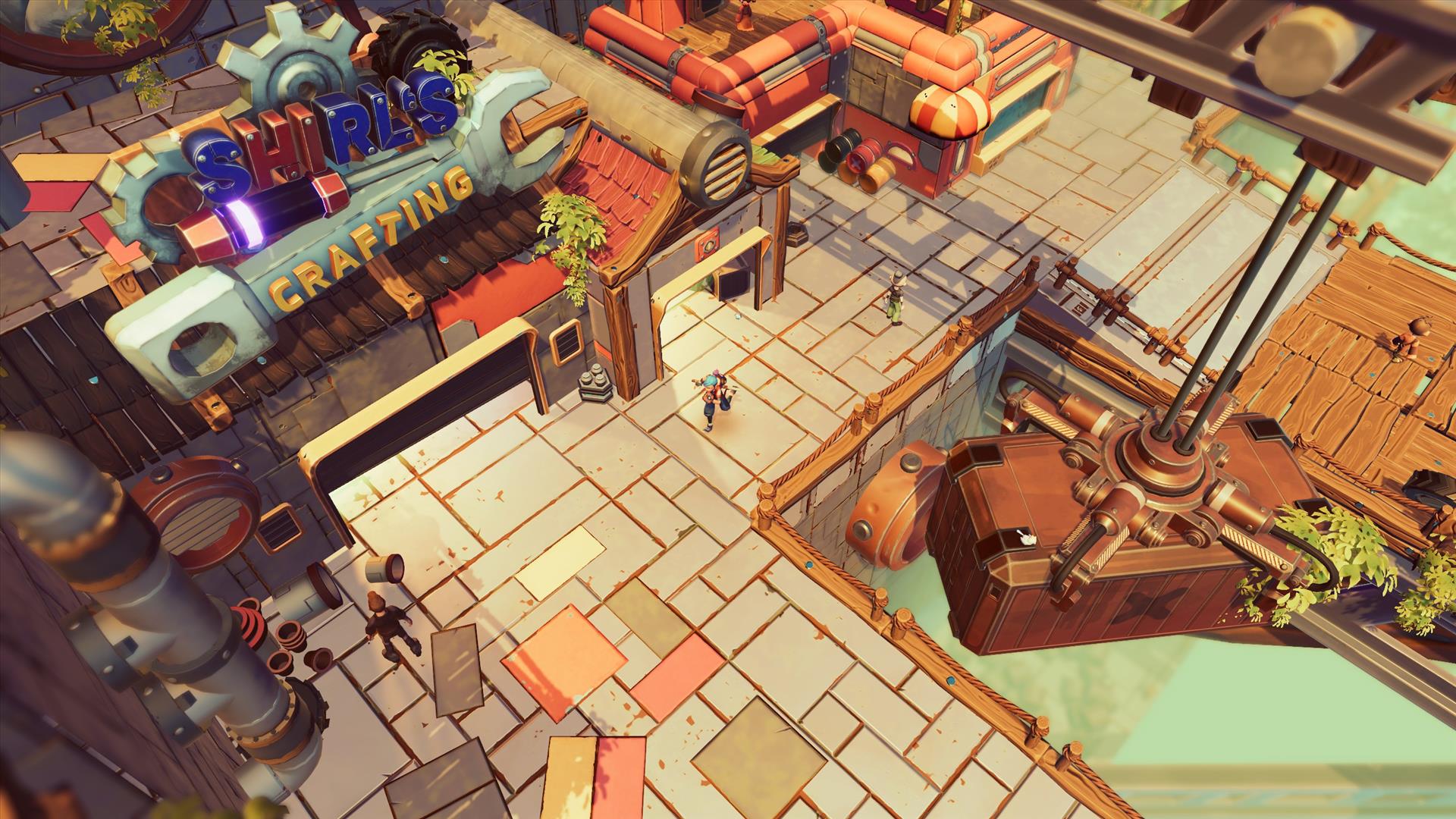 The blade you find is your only weapon for a while until you begin helping out the citizens of Needle Eye. Soon you’ll start to gain access to various inventions like the Zap Trap - which you can place on the ground to stun enemies, and the Stickyhook - which is the game’s grappling hook, allowing you to hook onto certain surfaces and enemies. You’ll also gain an ability called Time Core, which can be used in certain locations to transport yourself to that location in the past. This allows you to manipulate objects in the past to alter something in the preset and solve various puzzles. You can’t use Time Core whenever you wish though. The game will tell you when you can use it, usually when you’re near a few pink crystals floating in the air.

As you’re roaming around the various areas, you’ll come across crates to destroy and enemies to defeat, both of which can drop various items to pick up. Most of these will be random parts and scraps you can use to upgrade your gear, and circuit boards, which are XEL’s currency. Chests can also be found scattered throughout each area and can also contain various parts and circuit boards and recipes you can use to craft various items. You can also use campfires to presumably make food to heal you, but I didn’t find any recipes in my travels (they are out there, I just wasn’t looking in the right locations). 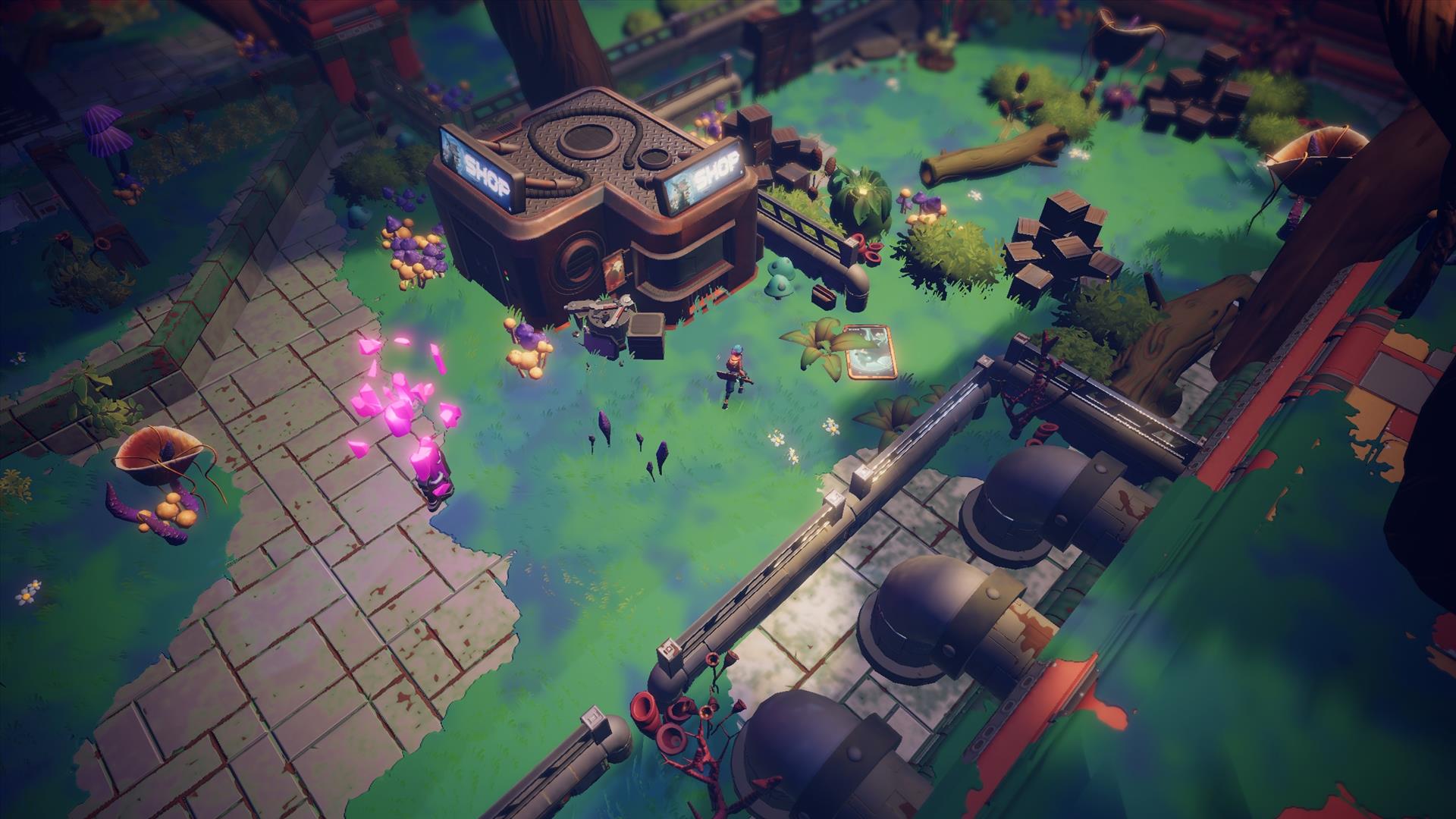 I mentioned in the intro about games taking notes from The Legend of Zelda, and the similarities here are instantly seen.  From the top-down isometric view to Chap's similarities to Navi from Ocarina of Time (though thankfully less annoying) to even having to find a sword at the start of the game and eventually finding a shield, many of the beats in this game feel very familiar. You have a dodge roll that uses a stamina wheel very similar to that of Breath of the Wild. That said, the concept of the game is good. I am perfectly fine with other games that play in a similar style to Zelda, especially if they do something to make them stand out among the rest. XEL does this in some places with the Time Core ability and the ability to use the various parts you find around XEL to create new items. 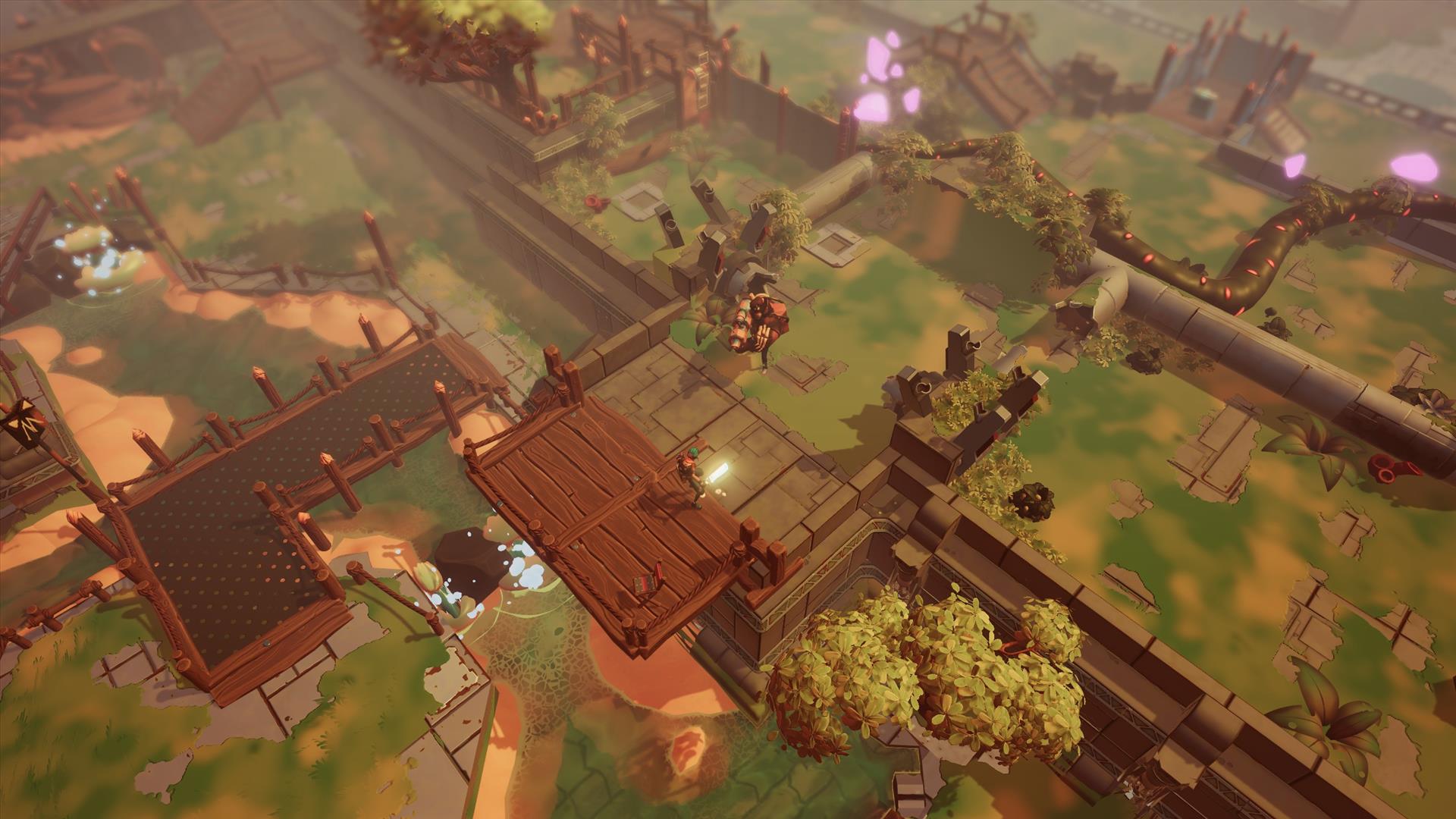 However, there is one major issue that sadly plagued me not too long after reaching Needle Eye, which isn’t too far into the game. Keep in mind that I reviewed the Nintendo Switch version so your mileage may vary on the PC, but the Switch version of XEL suffers from several bugs and performance issues. Once I started exploring the world beyond Needle Eye the framerate tended to drop quite a bit, definitely going below 30fps. It wasn’t unplayable for the most part, though I did have one moment where an enemy exploded after I killed it and my framerate plummeted so badly I had to restart from the save point. Leaving the area beforehand fixed the issue but going back dropped it again. Then when I got back to that area after reloading my save, I got shot by an enemy and the game outright crashed (thankfully this was the only crash I encountered). 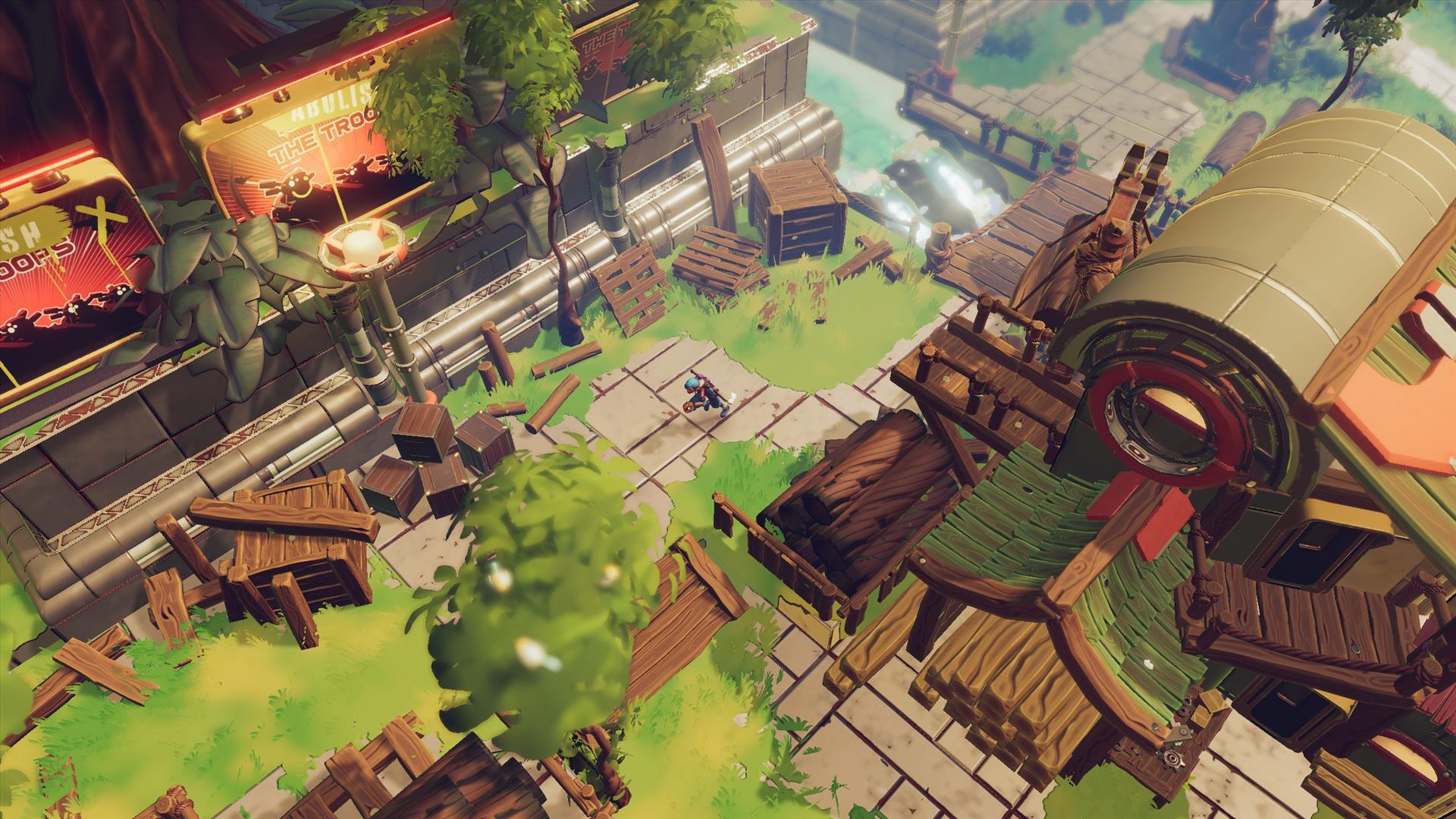 Graphically XEL looks pretty good, but there are issues there as well. There have been a few instances of trying to transition from one major area to the next, only for that next area to not load right away, causing me to accidentally fall off the map entirely and die, forcing me to reload my last save (which, for the record, you must do manually as XEL has no auto-save feature). Sometimes the character animations in cut scenes don’t match what’s being said or characters just slide out of the room instead of walking. Characters will be named “???” for quite a while after you know who they are. Some items on pick up will not properly tell you how much of that item you actually get (this is most notable with circuit boards, the game’s main currency). I’ve been softlocked out of a boss fight because I skipped a cut scene and got placed outside of the boss arena with no way to open the door. 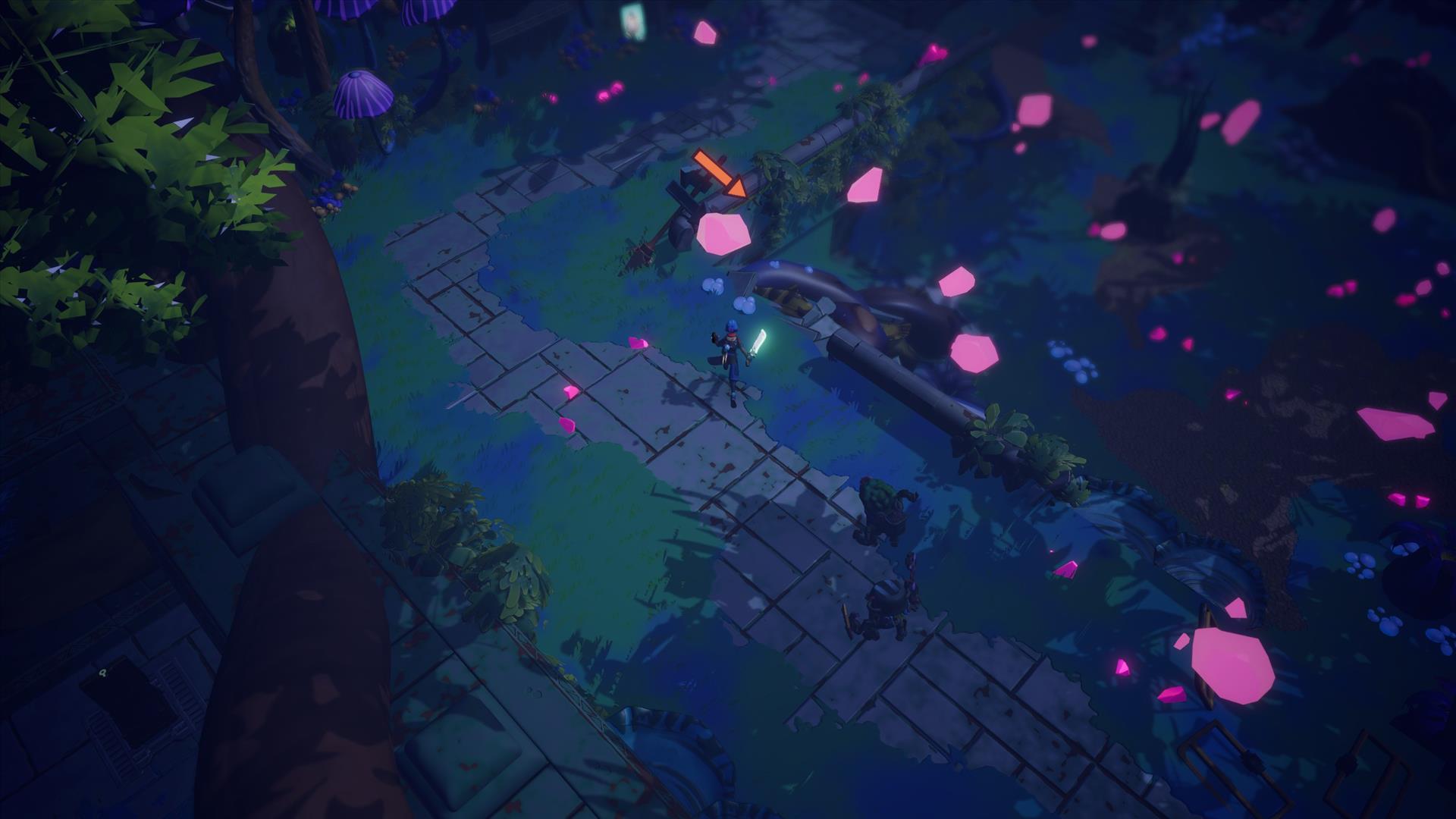 Then there are the bugs I encountered just walking around. I’ll try to move to an area on screen only to get stuck on a ledge or accidentally dodge roll somewhere I’m not supposed to. One time I even got stuck on some rubble on the ground walking under a broken bridge and I couldn’t free myself. It doesn’t help that the camera can’t be manually rotated whatsoever, which can also make things such as finding items to even fighting enemies a bit of an issue if you move behind something in the foreground and can’t see what’s hitting you. The camera is also zoomed quite far out with no way to zoom in, so a lot of times I didn’t even see enemies out in the open until I was getting shot at by them. It also doesn’t help that when fighting enemies with your blade the attack happens when you release the attack button, not when you actually press it which can take some time to get used to.

On the surface XEL looks like a good game and as someone who likes these kinds of games, I really wanted to enjoy it. The problem though is that below the surface there are a lot of bugs and technical issues that really prevent it from being an enjoyable experience. The issues prevalent in XEL sadly prevented me from completing the game, but if these issues ever get patched out at some point I’d gladly like to go back through and fully complete it. As it stands now though, it’s incredibly difficult for me to recommend XEL in its current state.

XEL looks great on the surface, but unfortunately it has too many bugs and technical issues to warrant recommending it to anyone. The framerate drops and slow-loading zone transitions alone can cause some frustrations, but add in an uncontrollable camera that is overly distant from the action, difficult to detect enemies, and terrain that is easy to get stuck to - forcing you to reload from your last save point, and you have a game that is near unplayable in its current state. Patches may resolve these issues, but as of right now XEL is too frustrating to fully enjoy.