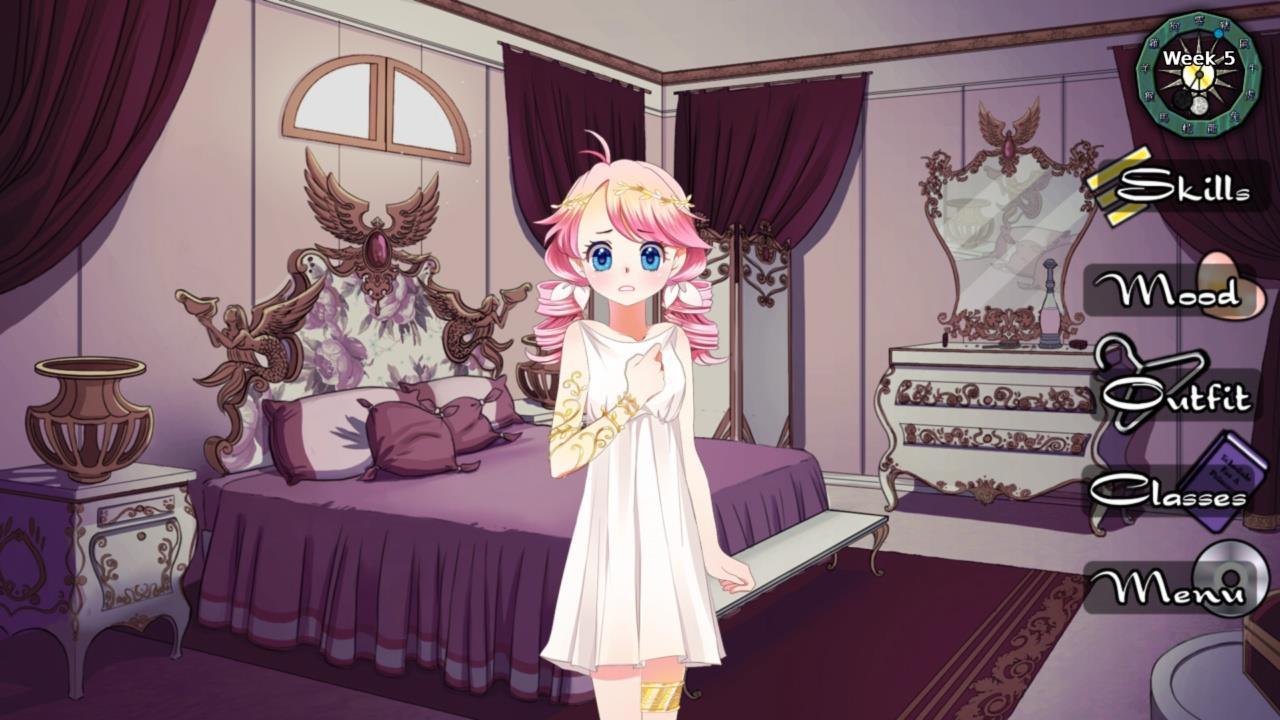 Written by Elliot Hilderbrand on 7/19/2022 for SWI
More On: Long Live the Queen

You wouldn’t think singing practice would be such a high requirement, but you’d be wrong. Same with falconry. That is the magic of Long Live the Queen. Little things that seem like something you would never need to learn them are in fact essential to staying alive.

You play as the heir to a kingdom, your mother just recently passed, and it will soon be your duty to lead your nation to a glorious new age or die trying. Long Live the Queen plays out via in-game weeks. Each week you get to make a handful of choices, and then you see them play out. For example, you pick two subjects you would like to study for the week. There are 13 to choose from, and each of the 13 has three separate class options. If you pick animal handling as one of your choices you can then decide if you want to go with horses, dogs, or falcons. Choose falcons, but also dogs. Horses are a pretty decent way to go as well. You have a scenario that then plays out, and after that comes the weekend. You can choose tasks like visiting your mother’s grave, sneak out, play with toys, attend court. Some weekend choices come and go, like seeing visiting delegates. Every choice affects your mood, and in turn, affects how your studying goes. 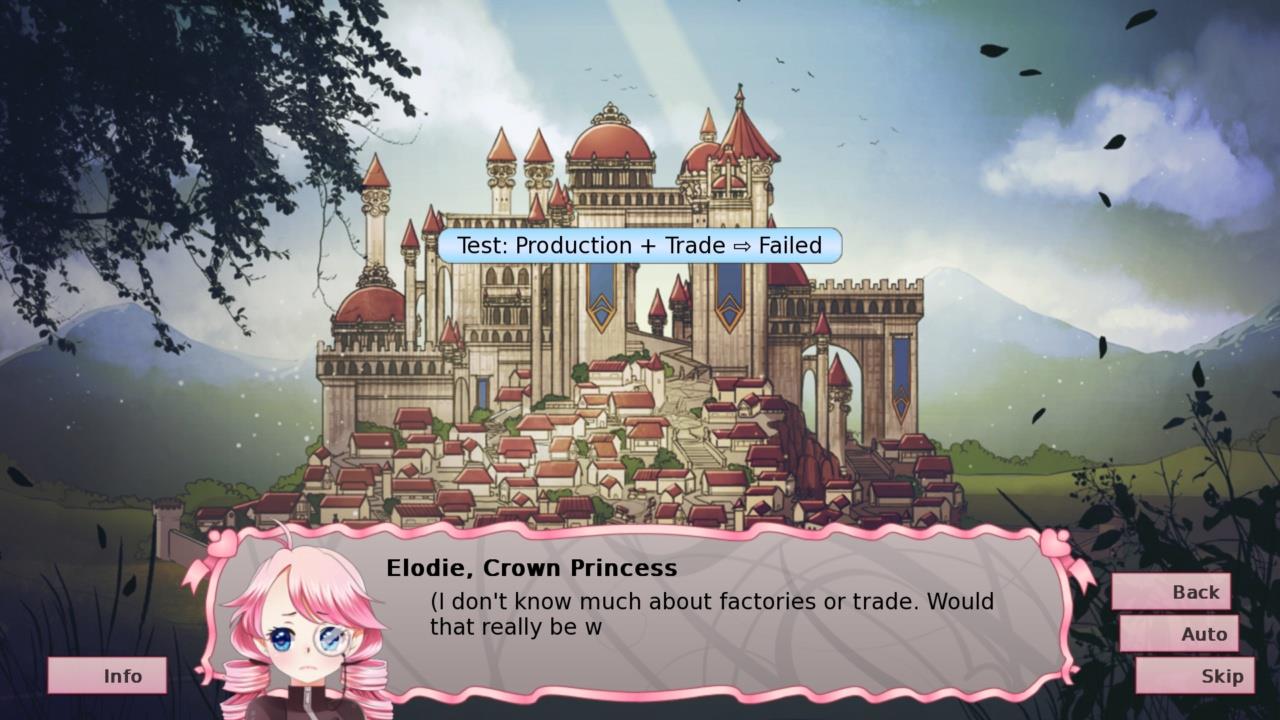 You don’t realize it, but you’re trying to not get yourself murdered. Or your kingdom seized in some coup d’etat. But I did, a lot. That’s a big part of the game. Learn from your mistakes, so that you can make them all over again, but a bit different the next time. In the beginning, it doesn’t make much sense and seems overwhelming. After all, there are only 13 subjects to choose from. Each subject has three class options as well. There are almost 40 options to choose from in terms of what to have your future queen learn. There is even more when you think about all the choices you have to make when the weekend comes. 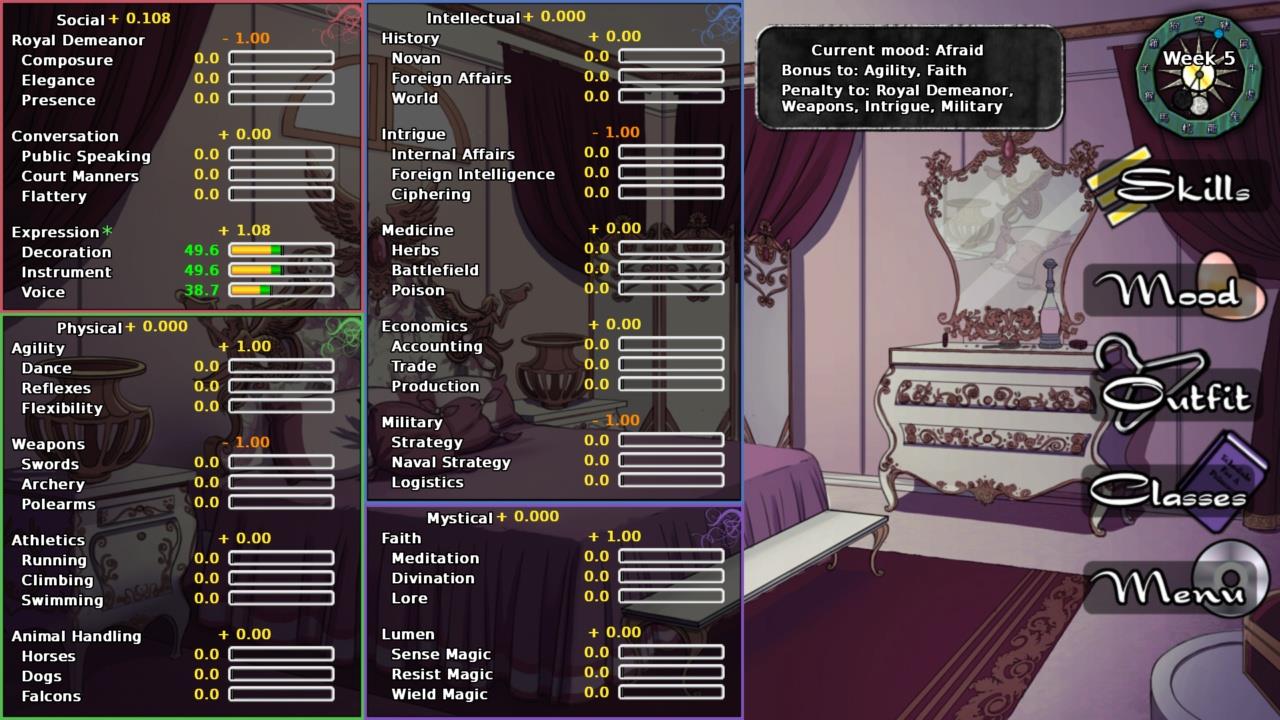 I can see how the initial overwhelmingness of Long Live the Queen could turn off a lot of people. There is a lot to take into consideration, but for me, that’s the fun. At first, I felt like I was making blind choices, and I was. But after a while, you start to get the big picture of what is happening, and choices start to make sense. It’s mind chess. You have to try and think 15 moves ahead. But the choices you make should take into account your current mood, at least on occasion. When the queen feels certain ways, that can help boost how fast you learn certain subjects. Sometimes it’s alright to feel depressed, that makes learning some subjects easier. It also doesn’t help that the art of Long Live the Queen portrays a somewhat innocent-looking game. But that is a bold face lie. Straight up. You are fighting for your life every step of the way. It’s not going well for you, ever. 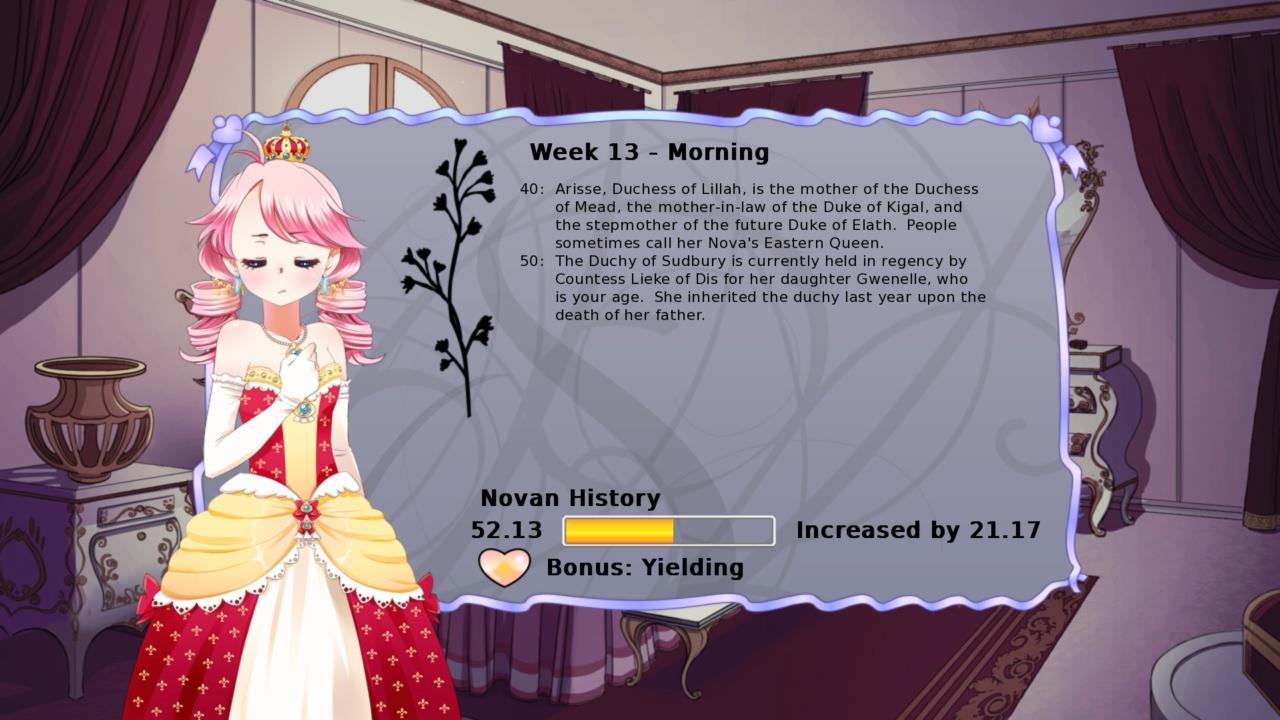 Long Live the Queen adds touchscreen controls with the Switch version. This was a great game to take the Joy-Cons off the controller, and just hold the unit in my hand as I sat on the couch and played. This was also a great game to play as a second screen experience. I could easily watch a show with my wife as I sat and played. Everything happens once I make my choices and see the fallout. If I wanted to wait a few minutes because of something happening off-screen in the real world, there were zero repercussions. This game also lends itself to being played with the sound off. The music repeats itself, never really picking up, and sounding a bit melancholy. All the dialogue is written so there was not much need for the sound to be on.

I feel that I need to impart some a few tips to make it easier on anyone that might think of trying Long Live the Queen. Learn dog handling, it comes in handy. Also learn public speaking, is very important. Don’t forget battlefield medicine, a real lifesaver. History is very, very important, both foreign and domestic. Everything. Everything is very important. And that is part of the fun too. You are not going to get everything right, there is no way. And that’s why you die by being stabbed in the back by your most loyal subjects. Or your partner-to-be poisons your food at dinner. You never see half of it coming. 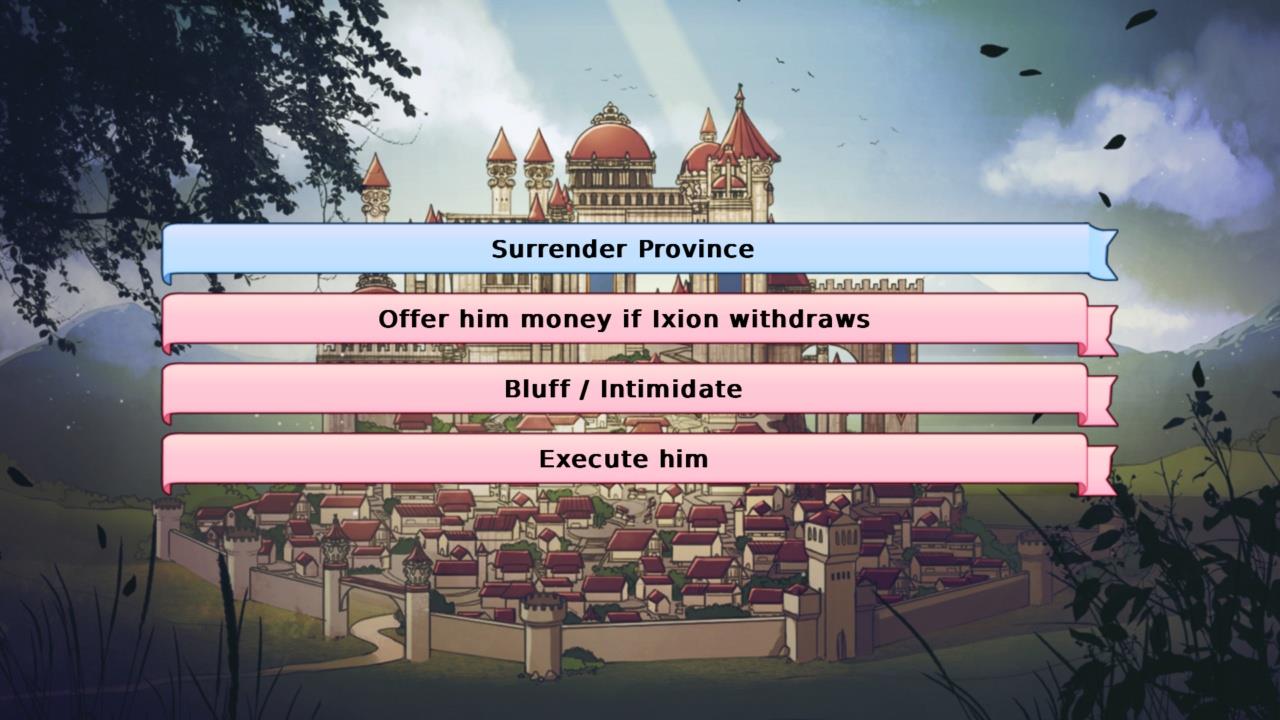 That is the eternal struggle of Long Live the Queen. The tension is picking the right subjects at the right time. Having to make the queen feel certain ways, to boost certain classes, at certain times. But you have to read the writing on the wall, to see what could be around the curve. In my first play-through ended horribly. Same with my second. Everything just comes so fast. For a game full of menus the weight of a few words can mean the downfall. I can see how this would turn people off, that was my initial thought. I kept at it though, getting better and better. I found myself wanting to go just one more week in-game before calling it on that play session. 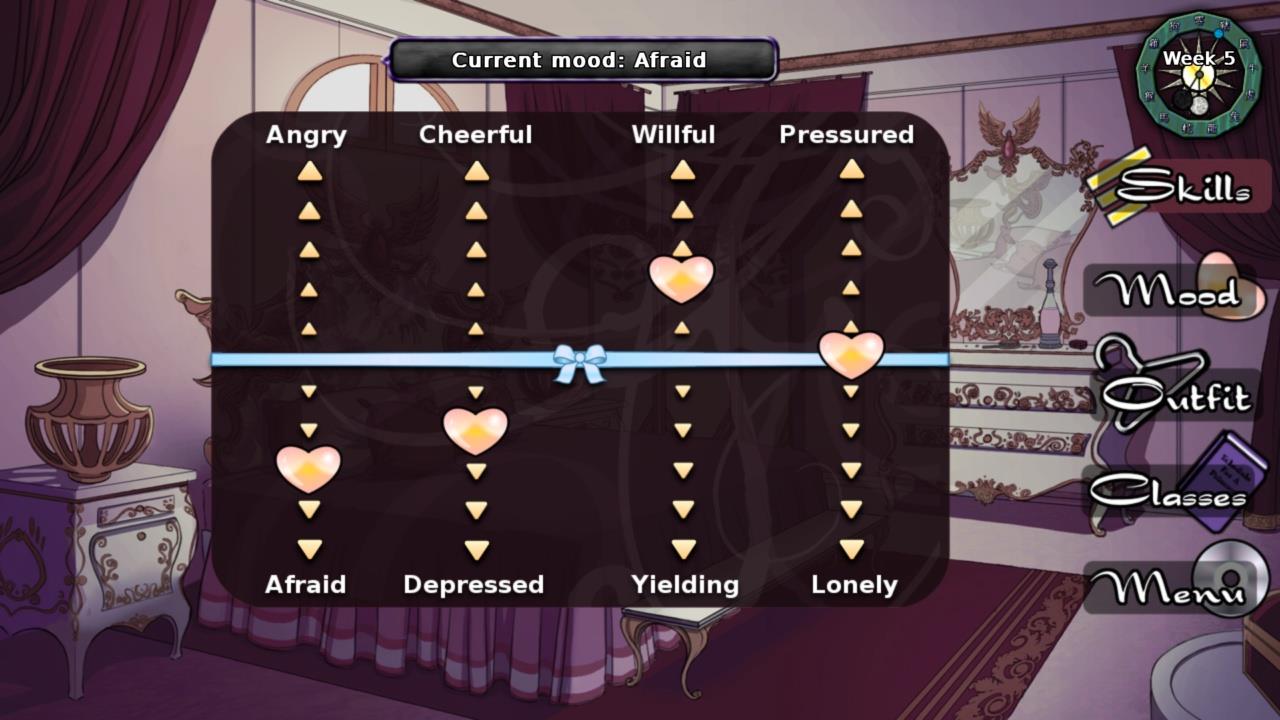 Long Live the Queen feels like an interactive story. The in-game weeks can go by quickly, and then you read the fallout of the choices. Will you fail at the task presented the following week? Probably. But there’s always next week. With enough trial and error, you can get an ending that satisfies the amount of effort you need to put in. Towards the middle of a playthrough the attempts on my life feel like a constant barrage, and a bit overwhelming.

I don’t typically find myself drawn toward visual novels or political simulators. But I found the challenge of Long Live the Queen to be worth my time. My reigns were sometimes short, my deaths painful. Excellent controls for the Switch, using either the Joy-Cons, or playing on just the touch screen was perfect. It’s hard to be queen, no one ever sees the hard work you put in, just your faults. The music leaves something to be desired, and the amount of reading could be too much for some. But if you invest the time, and learn how to play the game, Long Live the Queen becomes a game worth your time.

What’s my final piece of advice for Long Live the Queen? Shake it off and try again. Is it worth the challenge? Yes. Being successful is gratifying. But having said that, this is a menu game; navigating menus is the core mechanic. There’s also plenty of reading that is required, skipping over it makes playing this game almost pointless. The soundtrack is beyond repetitive, nearing an annoyance, but it isn’t required to play. Touch controls are fantastic, elevating this to being a great game to sit on the couch and play.