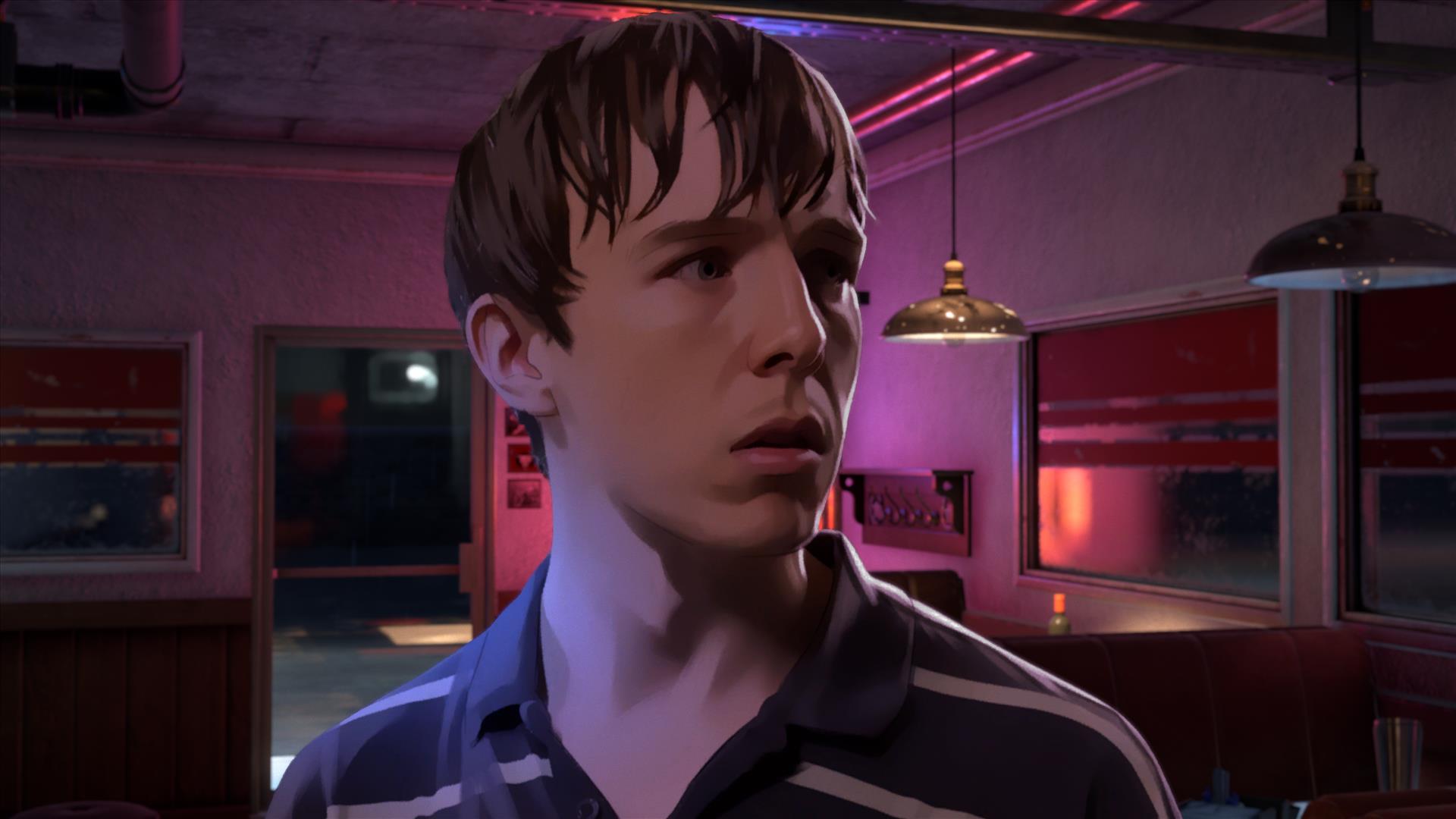 Everybody has some sort of trauma in their past. No one comes through completely clean, unless they have an extremely short life. It’s a fact of human existence that life contains moments both light and dark; the best you can do is try to focus on the good stuff, do your best to stay out of danger, and try not to let pain and grief overwhelm you. Of course, life can also seem to be meticulously balanced. There are good people hiding among the monsters, and everybody has their own history and perspective – even the bad guys.

As Dusk Falls, the new multiplayer adventure game releasing this week on Xbox and PC, goes deep on some of these ideas, depicting them through a series of tragic events that take place at a motel in the middle of the desert. Locations like this are perfect for crime stories – the mixture of isolation, random visitors passing through on the highway, and small-town characters with their own secrets and motivations combine into a cocktail almost too good for writers to resist. 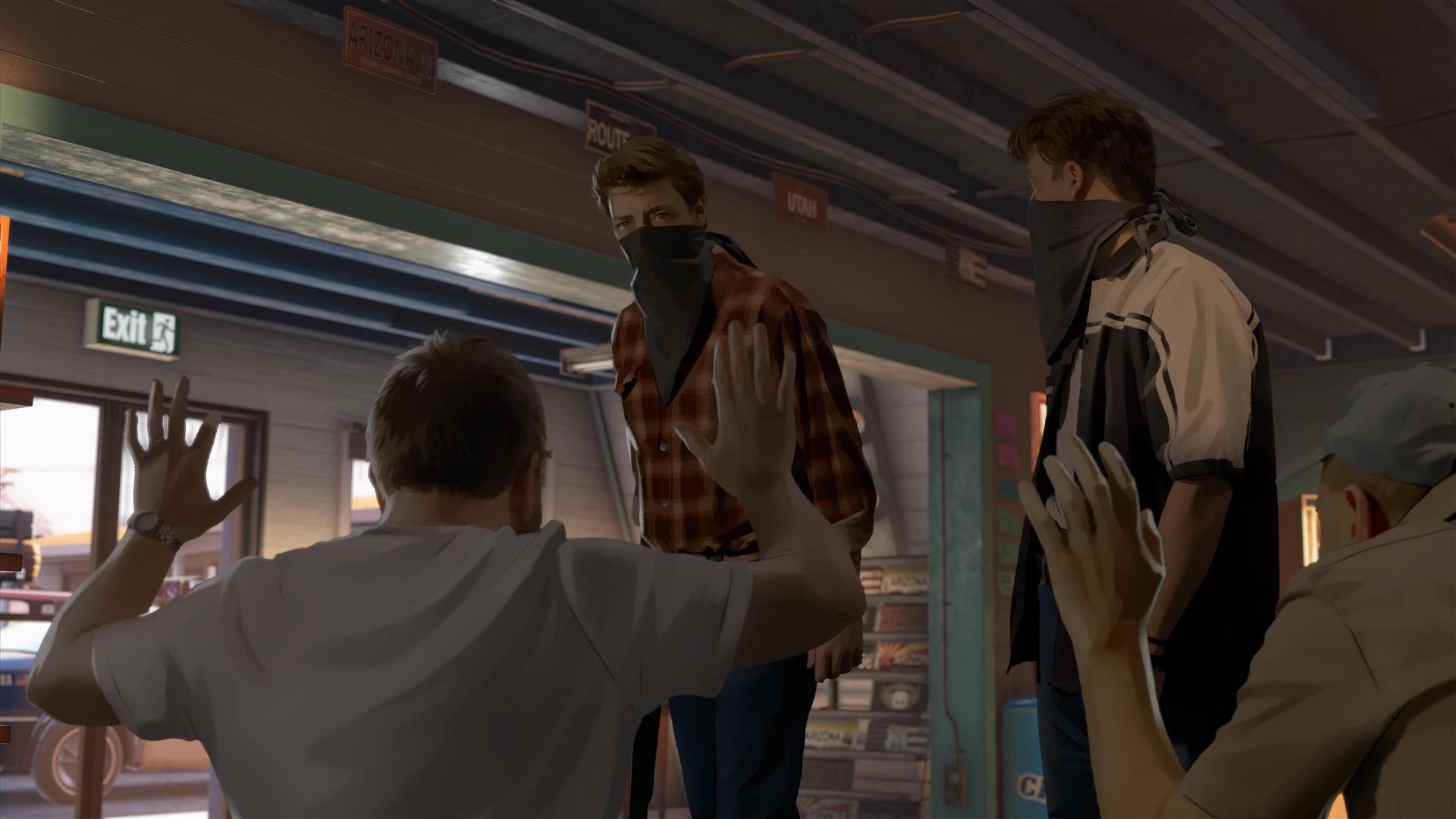 This particular story is a tale of two families (though, upon further consideration, I might bump that number up to five - this is a sprawling story) on a collision course. Both families have arrived at the Desert Dream Motel by happenstance – one broke down on the road, the other is taking shelter after a robbery gone bad. Along with the motel staff, these characters spend the game bouncing off of each other as circumstances go from bad to worse, and one night takes a series of tragic turns that will impact them all for the rest of their lives.

Hardly anyone is coming into this situation completely clean, despite appearances. There is only one innocent in the room, and it doesn’t take a whole lot of time before that innocence is shattered. How that happens is up to the player (or players), but make no mistake, damage will be done. 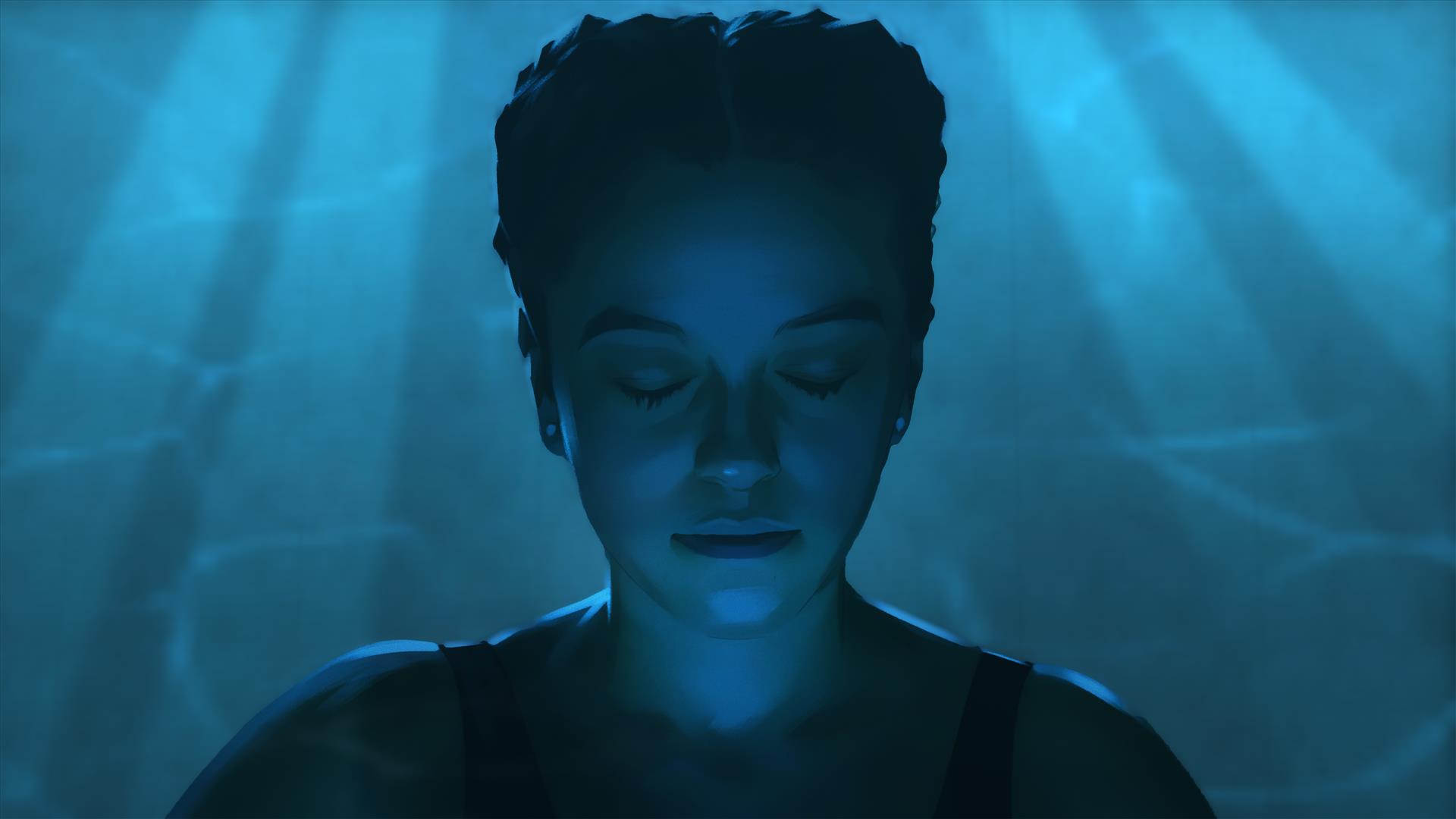 As Dusk Falls is a particularly well-written game. Like most of the better stories in this genre, it peels back like an onion, slowly revealing the secrets, history, and motivations of its characters in ways that feel organic and real. By the end of the game, you have a full understanding, and a fair amount of empathy, for most everyone involved at the Desert Dream standoff. As the game moves forward, some background characters step to the fore, and folk you thought were the focus of the game either die or fade to the back. Though a few of the characters seem to get a bit short shrifted, the game ends on a note that suggests that we haven’t seen the last of these folks, and there are still some dark secrets yet to be unearthed from the dust of the desert.

Interestingly, the motel-hostage storyline you’ve seen in the trailers for this game are only half the story. As Dusk Falls is interested in telling a hard-boiled crime tale, but it also concerns itself with the aftermath of that story; what happens to everyone after the dust has settled is just as big a part of the game as the howling mess in the motel. Like I said above, no one gets away completely clean, but in my playthrough, some came out cleaner than others. In fact, some came strolling out of the grime smelling downright rosey. 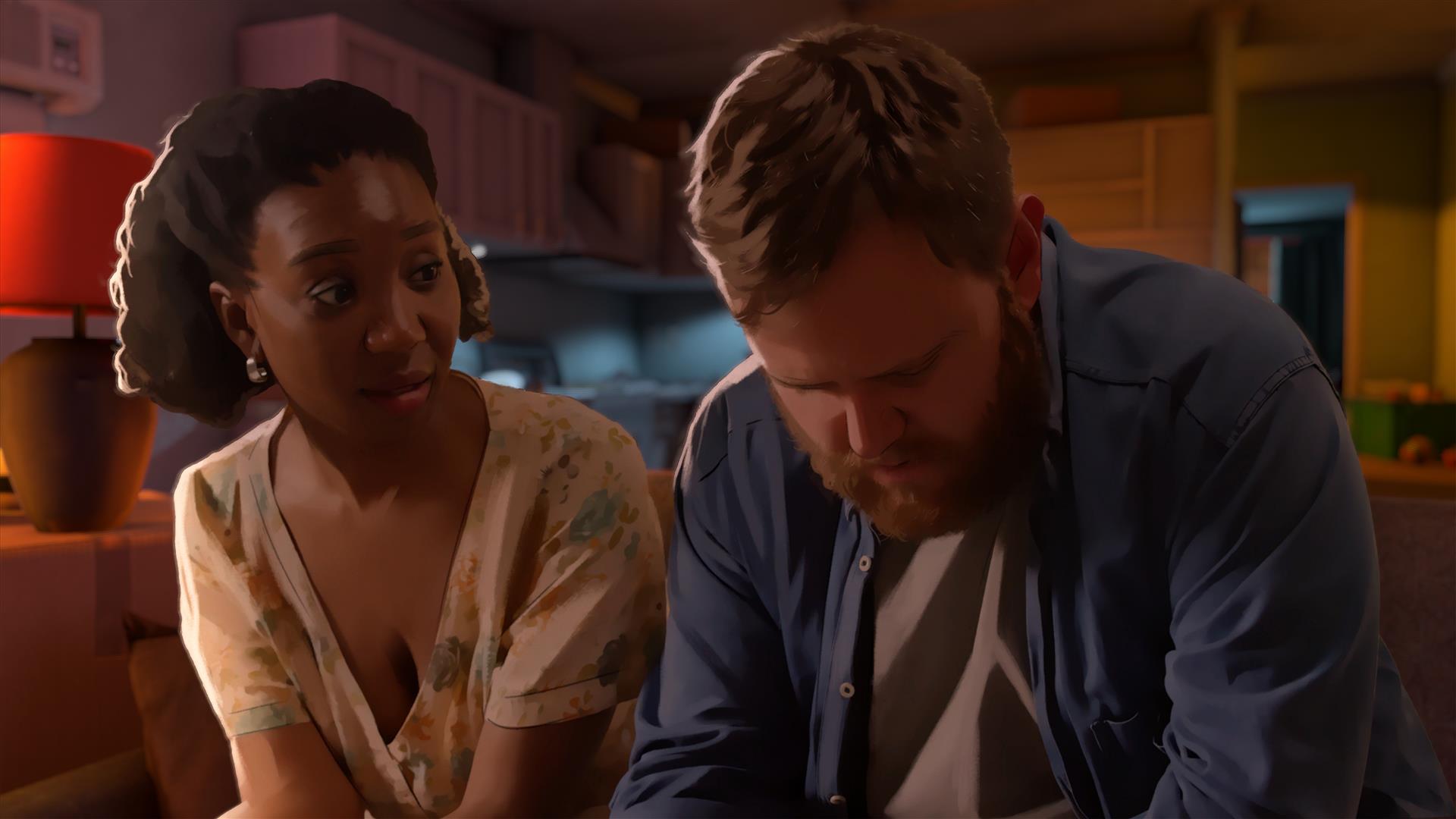 Obviously, As Dusk Falls is a narrative success. The story I saw – which will be different from the one you see - was thematically satisfying, which is one hell of an achievement for a game in this genre. At the end, I didn’t feel like the game had dropped any threads of the story. The one throughline that I thought was being ignored came flying back out of nowhere at the end to reveal that the writers were one step ahead of me the whole time.

The artwork in As Dusk Falls is extraordinary, consisting of thousands of amazing, life-like paintings. I wish I knew how the look of the game was achieved. One thing I’m certain of though – these are not just photographs blindly shoved through a filter to turn them into artwork. A human hand was needed to give each image the proper tone and lighting needed to communicate the mood of the game. Take a look at these screenshots; each image in the game is a separate work of art, and they come flying at you with a speed that makes it difficult to appreciate them. I did notice in certain segments that the images become somewhat blocky and pixelated, which is a bit disappointing in a game of this caliber that relies so heavily on its own beautiful artwork. 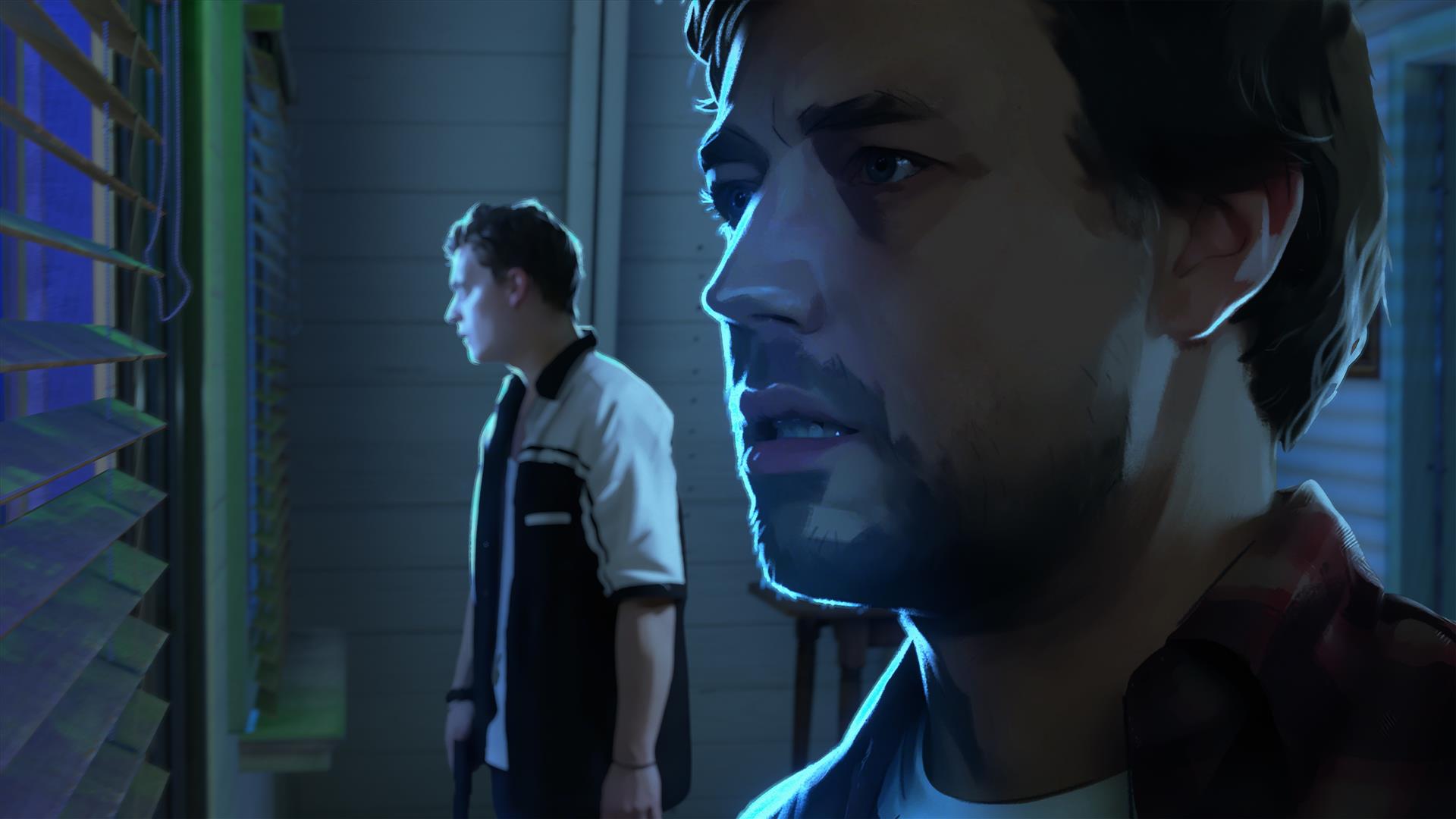 I was surprised to recognize a few of the performers in the game, but the character actors bringing As Dusk Falls to life were definitely on-hand and acting out these scenes. A quick trip to IMDB revealed that most of the characters in the game were closely modeled on the actors portraying them, which really helps sell the idea that you are looking at real people in real places. I would love to see more narrative games take this approach to artwork. As a comic-book fan, I absolutely appreciated the rapid slideshow of imagery, and quickly got lost in the story.

As Dusk Falls is made to be played in multiplayer, with up to eight players working together to make decisions. You can use a combination of controllers and phones – an intuitive app can be downloaded to your Android or iPhone and linked to the game with a quick invite code. Players work together to make decisions, most of which are on a timer. This can lead to a lot of heated discussions, as people will have very different opinions on how to proceed. Anything you can’t agree on will be solved with a vote, which can lead your story down some paths that you didn’t quite intend. 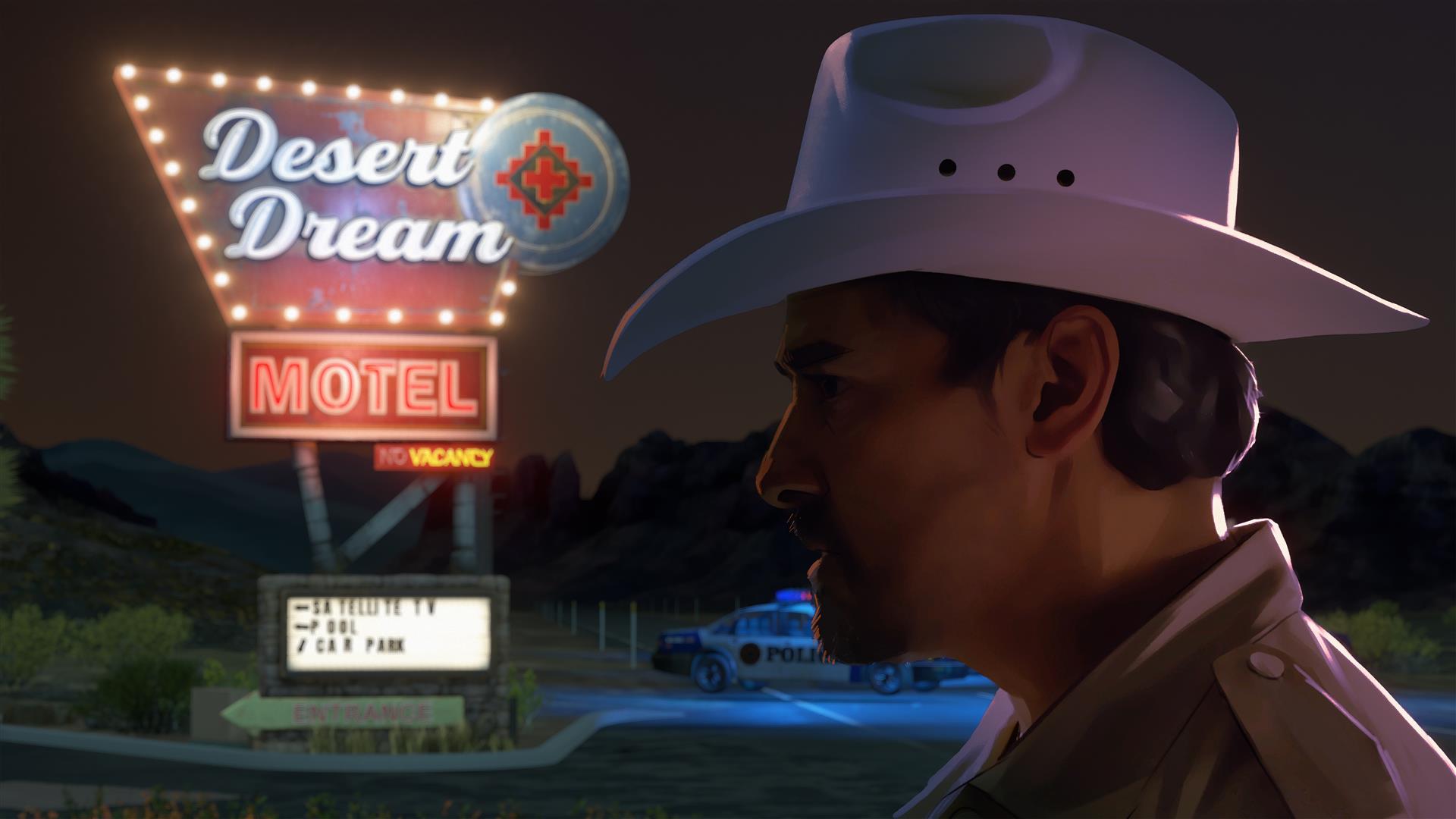 At the end of each hour-long "episode", the game gives players a report on their personality and playstyle. It's a fun mechanic, which causes a bit of hooting, even if it is difficult to take seriously. This is followed by a David Cage-style flowchart, which reveals just how far off the beaten path your chosen storyline has meandered.

Due to the multiplayer nature of the game, there isn’t a lot of exploration involved. Don’t expect any Life Is Strange town exploration, or The Quarry-style searching for hidden objects. Most of the open-ended sequences involve just a few choices; exploring a room is reduced to “open this drawer” or “look in this closet”. This allows the game to continue moving briskly and keep all the players involved, but when playing single player it does feel a bit restrictive. 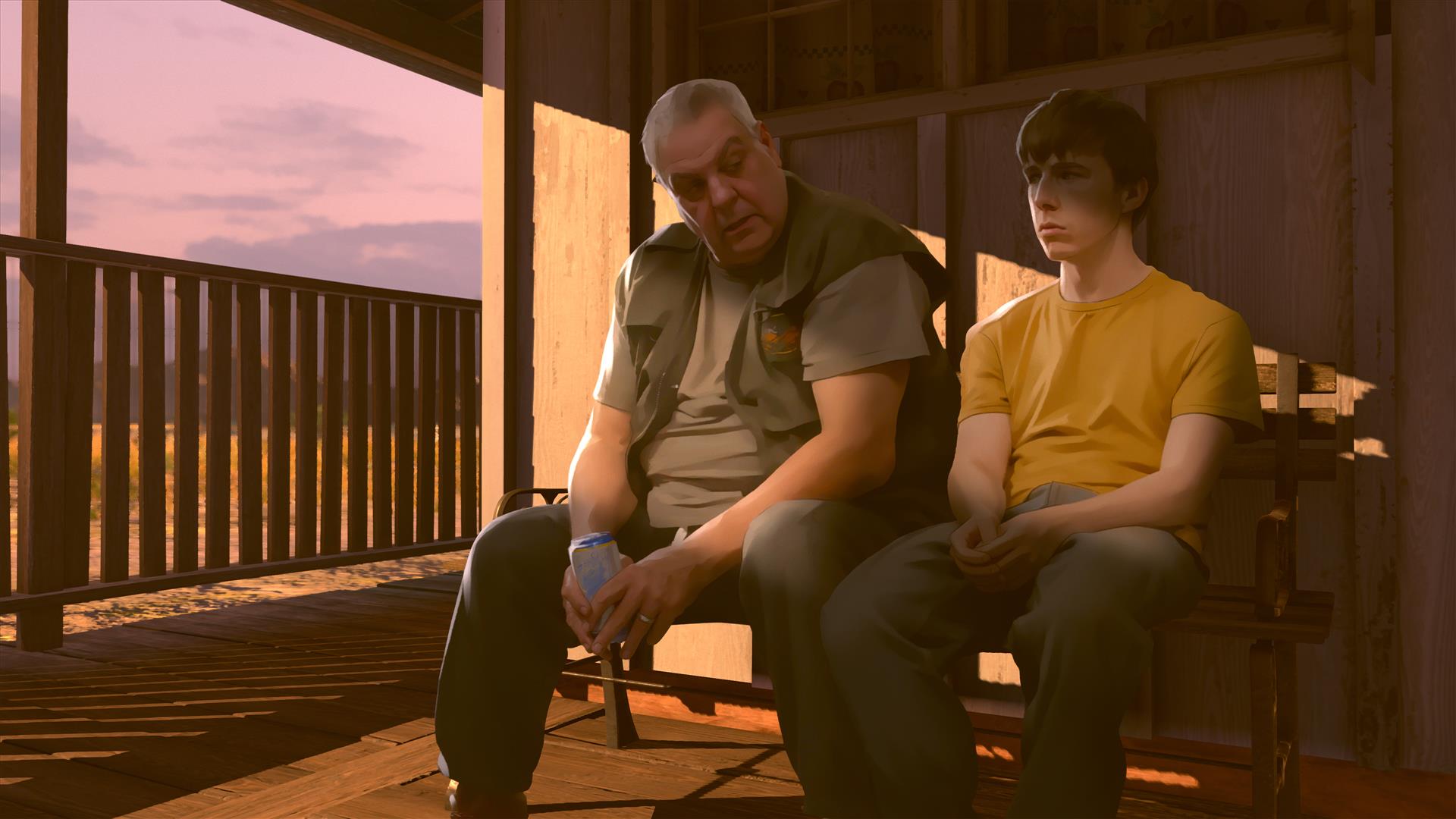 I played the first third of As Dusk Falls with a few folks I was able to put together for a night of popcorn and fun. We found that the game plays out well with multiple players, and it starts some pretty interesting conversations, leading us to pause the game to discuss. But – and this might just be me – I wanted to make decisions myself for how the game played out, so I must now confess that I gave the finger to my teammates and completed the game on my own. I’m just selfish that way. As Dusk Falls offers multiple saves, so I could have just started over again with a fresh playthrough, but I was already invested in this version of the story. Sorry friends, you must get your own copy.

I really enjoyed As Dusk Falls, and I deeply appreciate a game of this nature taking on more grounded topics. We don’t always need robots and ghosts to pull us into a good story. I’ve only played through As Dusk Falls one and a half times, so I’m not certain how much variation in the narrative is actually possible. As I often say of these games, it feels like you can take different side roads, but the destination is the same. There are situations in the game that feel inevitable, and in my second playthrough, I could feel the game inevitably driving me towards those.

But of course, that’s part of the point of stories like these; sometimes unstoppable forces and immovable objects are bound to meet. Somewhere out in space there is an asteroid hurtling towards Earth, and that’s just the way the story in this game feels. These characters are living out their destinies, and we’re just blowing the wind one way or another against a river that is gonna flow no matter what.

As Dusk Falls offers a great new take on the adventure genre, focusing on a story that feels grounded in the real world, made all the more impactful through its stellar artwork. The multiplayer works fine and is fun, but I found myself wanting to play without others. Satisfying narratively regardless of your choices, As Dusk Falls is weighty and serious, surprising with great writing, realistic characters, and plenty of twists. Highly recommended.