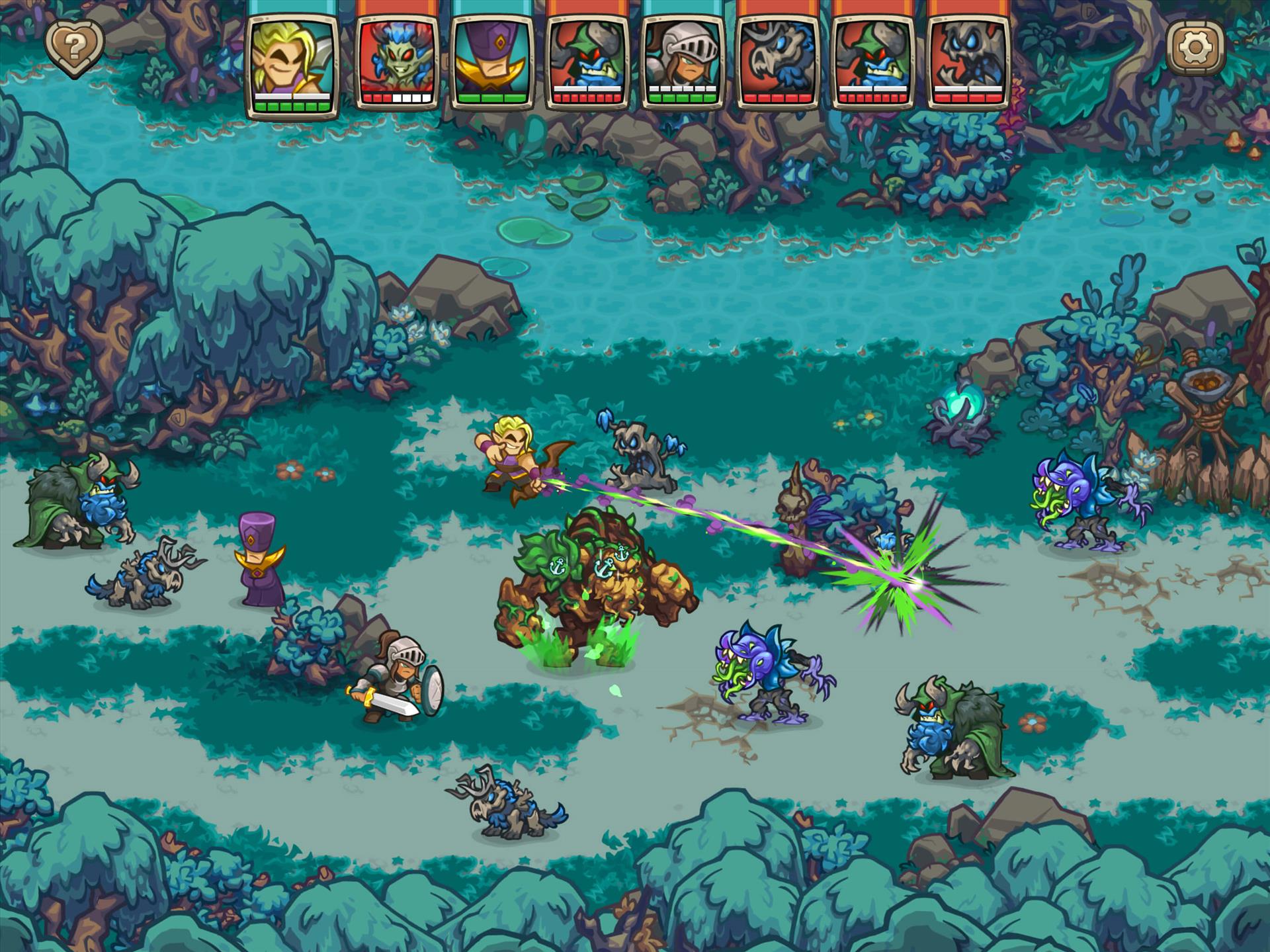 Written by Elliot Hilderbrand on 6/14/2022 for PC
More On: Legends of Kingdom Rush

The Kingdom Rush series of games typically reside firmly in the tower defense genre. With Legends of Kingdom Rush developer, Ironhide Game Studio breaks away from that mold to try its hand at strategy. Goodbye to the buildings and micro-management. Hello to the dice rolls and parties of adventurers. There’s complexity and simplicity all in the same motion. You have replayability that creates unique playthroughs, but also repetition that takes my attention away.

It took no time at all to get right into the action. Legends of Kingdom Rush spends little time building up much of a story; I blame its origin as a phone game for that. Learning how to play is just as quick. Each fight places you on a hex-based grid, and the goal is to clear the grid of the enemy units. Combat is turn-based, but moves at a brisk pace. This was where I had the most fun. Combat is simple, with a dash of complexity thrown in. The crew of adventurers you bring, and how you level them up can create certain styles of playing. I never encountered a style that didn’t work, just varying degrees of working. 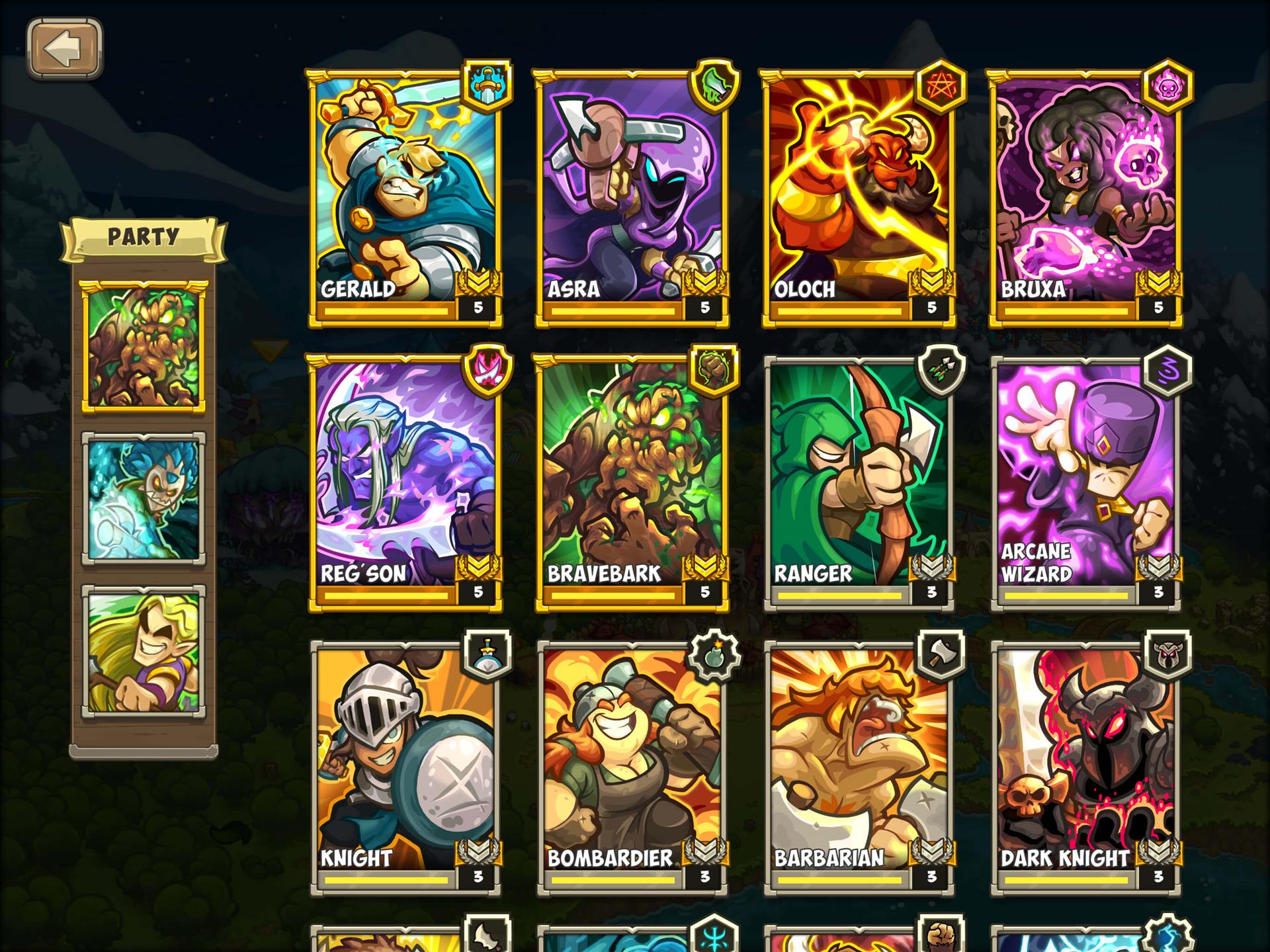 Coming up with a team to send out was also fun. You choose one of the named legendary heroes, like Gerald, the knight in shining armor. Once you’ve picked your hero you choose three class-style heroes, like a ranger or a dark knight to make up the remainder of your team. Even though they are given generic names the characters feel unique. I loved searching out new characters to add to my roster. I never used the same four units from map to map. I did find the ranged units fit better with my playstyle but they weren’t overpowering, just easier to use. I found the units to be balanced, allowing me to play how I wanted instead of having to fit a meta, which added to my enjoyment. 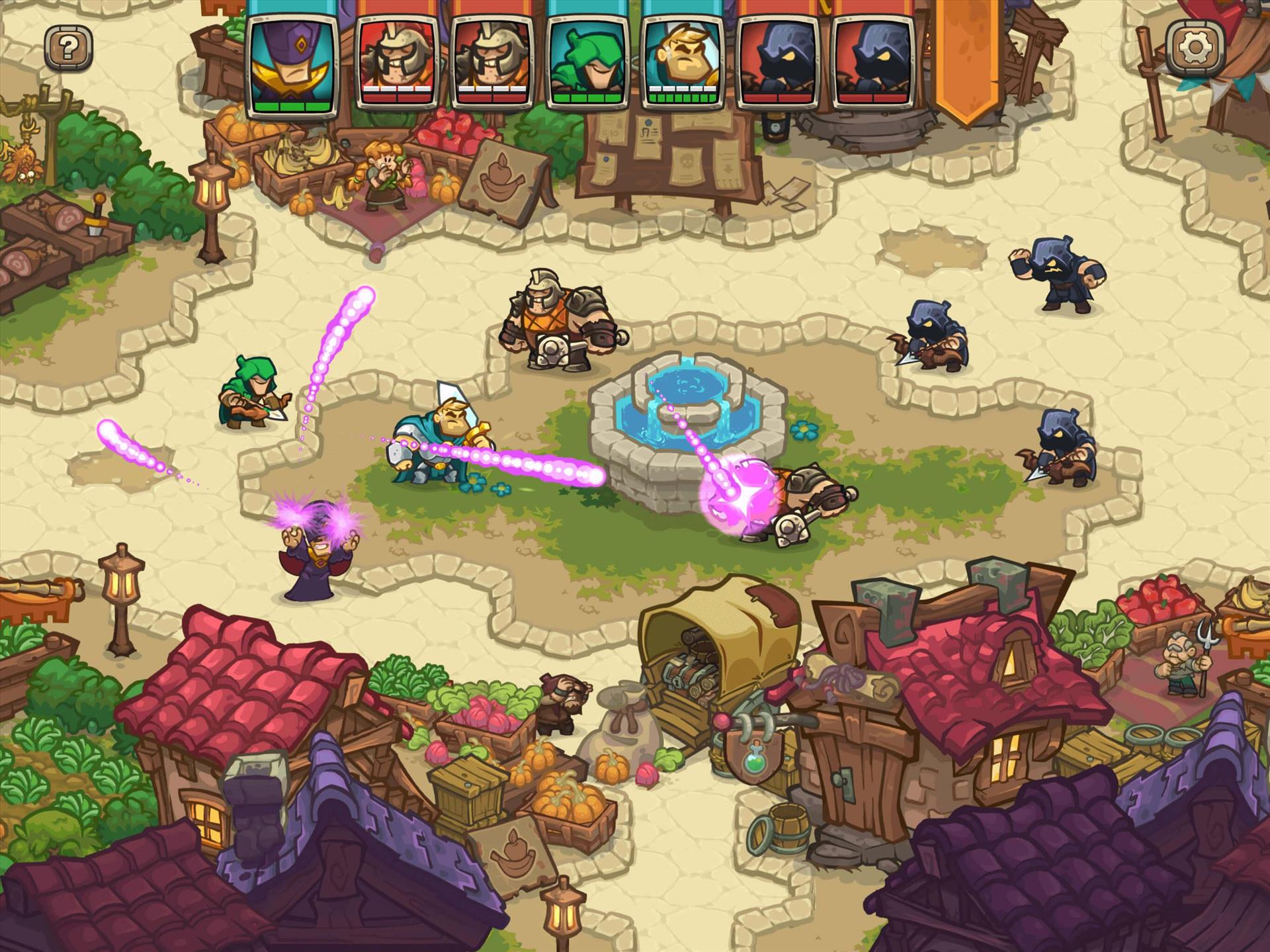 Once you have a team formed, the next step is to send them out to clear a map. The maps feel a bit like a board game. You choose the direction on the board you want to head, and as you move you have random encounters, as well as planned ones you can see on the board. You can decide which direction you want to head to get to the map’s final boss. Do you like taking the path north because it looks easier, or maybe choosing to go south because the map looks more direct, but doing so contains more battles? While making your way across the board you will stumble into random narrative events. You choose how you want to deal with the encounter, roll a die, and it plays itself out.

Maps can be cleared as fast or slow as you want. If you feel the urge you can visit every point on the map, gaining as much experience as possible, and making the final encounter as easy as possible. You could also die in the process, having to start from scratch. I didn’t feel the need to cover every square inch. Legends of Kingdom Rush has multiple difficulty settings. The harder the difficulty the more I felt I needed to clear the map in order to defeat the boss. 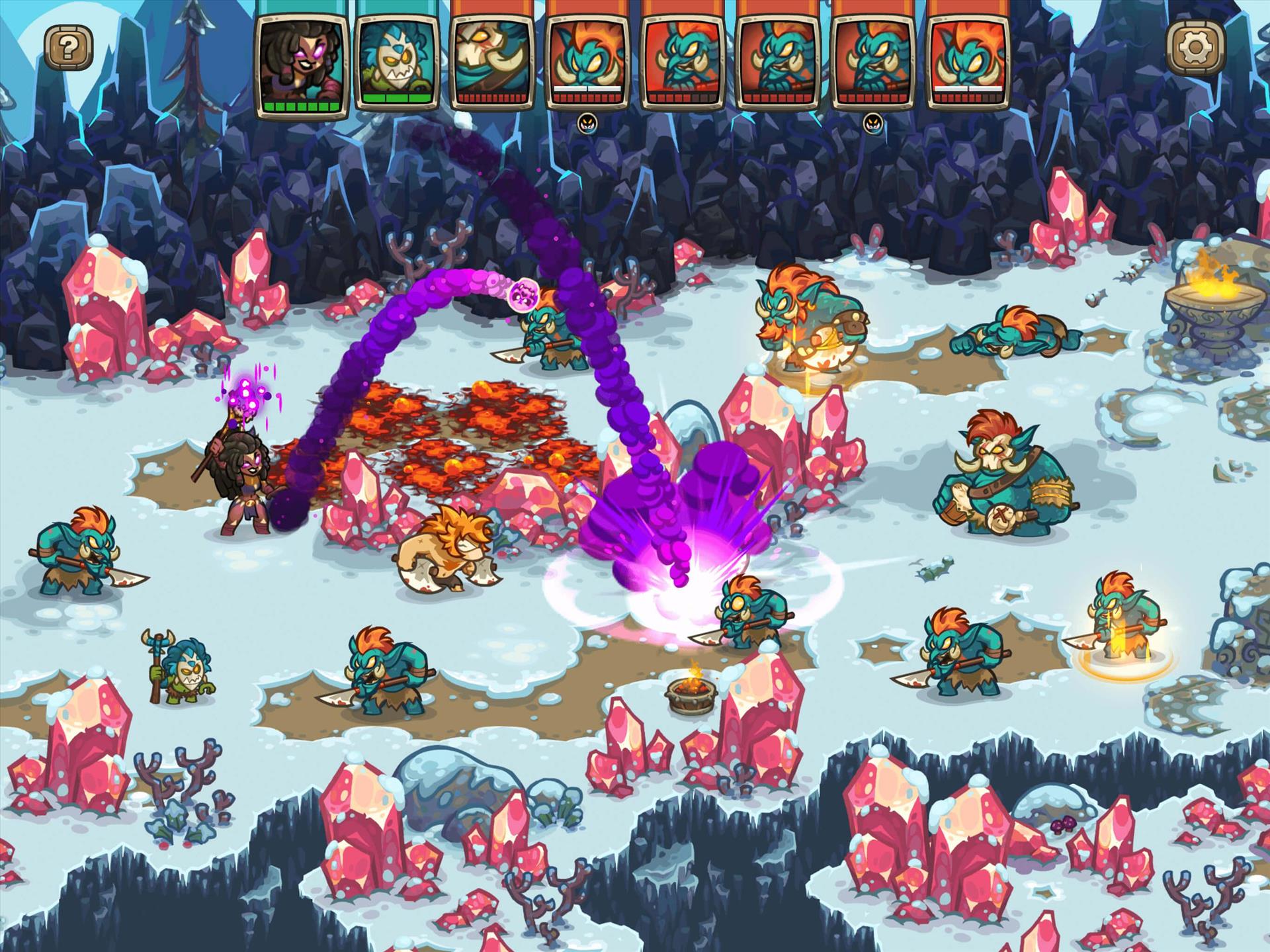 Legends of Kingdom Rush offers a lot of content to experience, most of which can’t be seen on a single playthrough. Since the scenarios change every time, if you want to see everything offered it will require a handful of runs. The experience is never truly the same from session to session. Even fights play out differently, more so when you change up the cast of characters you bring along with you.

Legends of Kingdom Rush lends itself heavily to being replayed. Each run on a map did feel different enough that I never felt bothered replaying it a few days later. While the basic design of the map doesn’t change, the group of characters you bring along can be completely different from run to run. The events that you run into, as well as the enemies you encounter change as well. Decisions will play out in an entirely new way, even if you bring along the same group you had in a previous run. 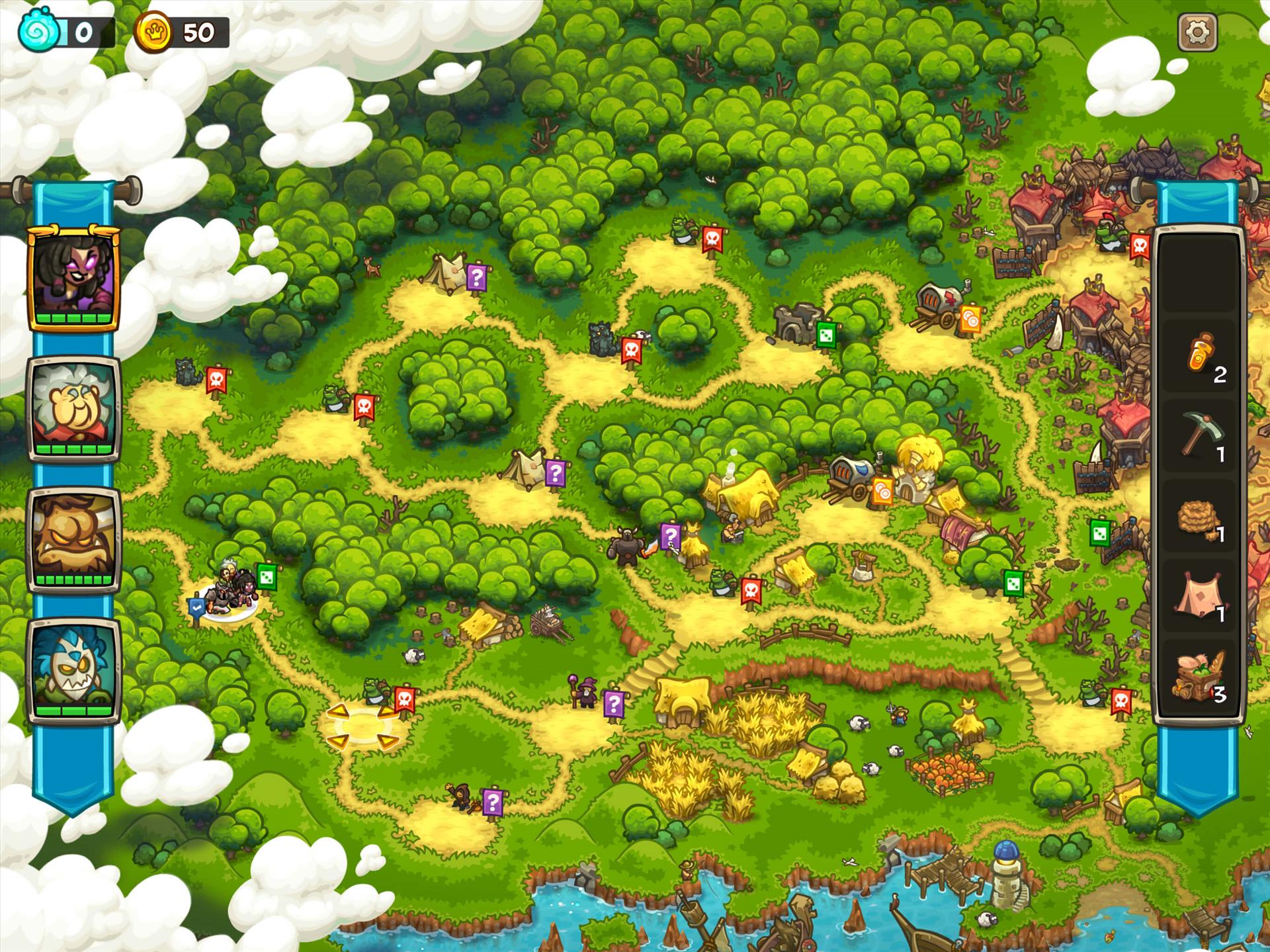 As I said earlier, Legends of Kingdom Rush got its start as an exclusive on the Apple Arcade platform, and at times it shows. I feel like I’m playing a phone game on my PC. Legends of Kingdom Rush never feels like it requires my undivided attention. I found myself turning to my second screen and watching something while I played. Even though combat turns never take too long, my attention would go elsewhere while the enemy AI would make its turn. The stakes also never felt high enough to call immediate attention to the screen.

Combat moves quickly, but never feels legendary. The weight of the world rarely hangs in the balance, and when it does I feel indifferent. There’s no grand scale. It's not that the tactical combat feels light, Legends of Kingdom Rush gets challenging on the harder levels. My issue might be with the overall length of Legends of Kingdom Rush. Maps don’t take long to clear, most of the time they can be finished in less than 30 minutes. Overall the game can be finished in a handful of hours. I understand how someone could say this game feels short when all they want to do is play through each map one time. 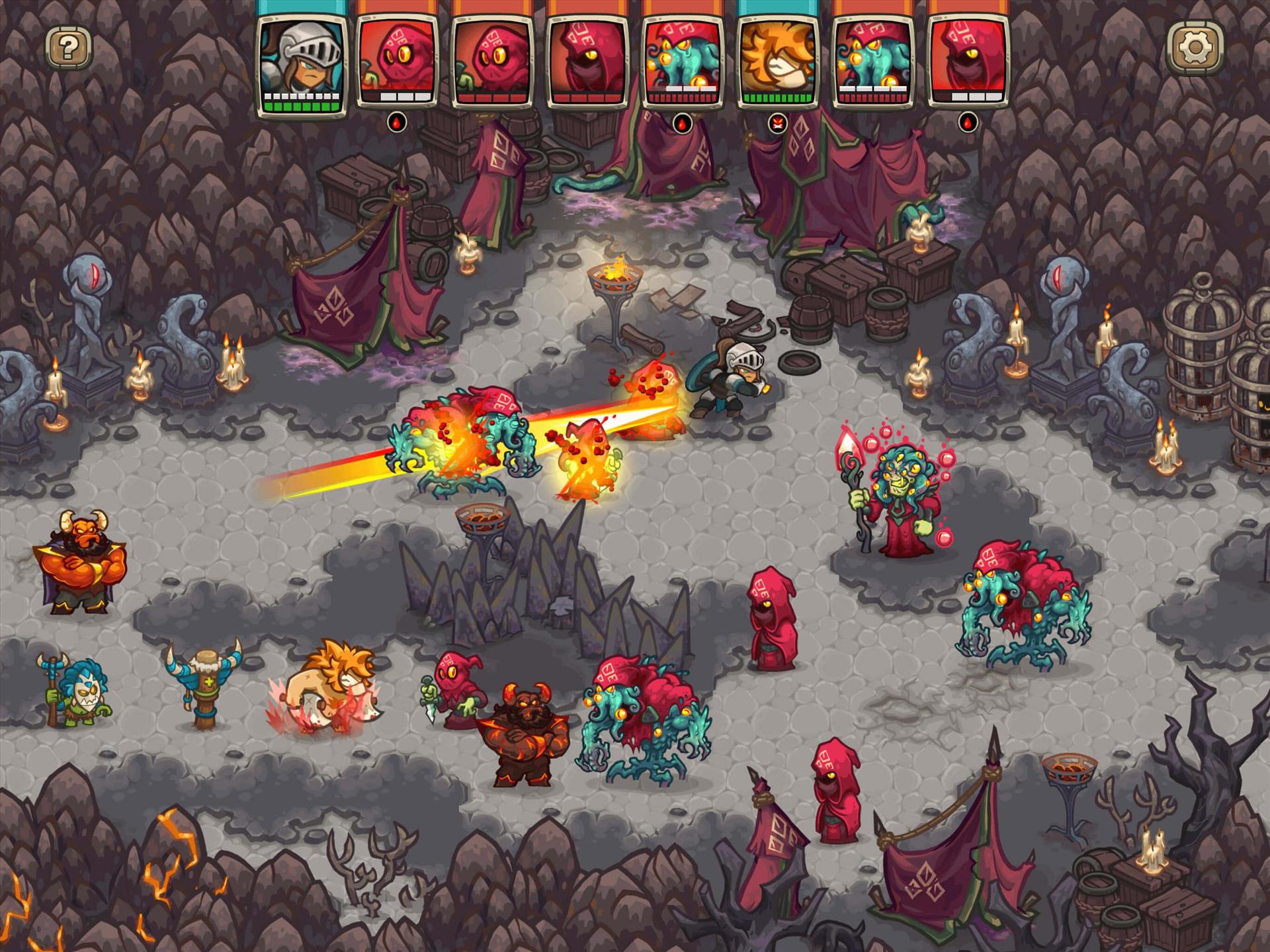 Balance within Legends of Kingdom Rush feels a little off. Ranged characters feel like they have most of the power. They might come with less health than their melee counterparts, but they are all carrying cannons. I found my melee characters running back and forth in an attempt to land hits on enemies, while my ranged characters would barely move. Early on I would try to balance my team with half and half, ranged and melee. But I quickly turned that to one melee and three ranged players. Experimenting to find a group is still part of the fun, it became which ranged fighters to bring along. 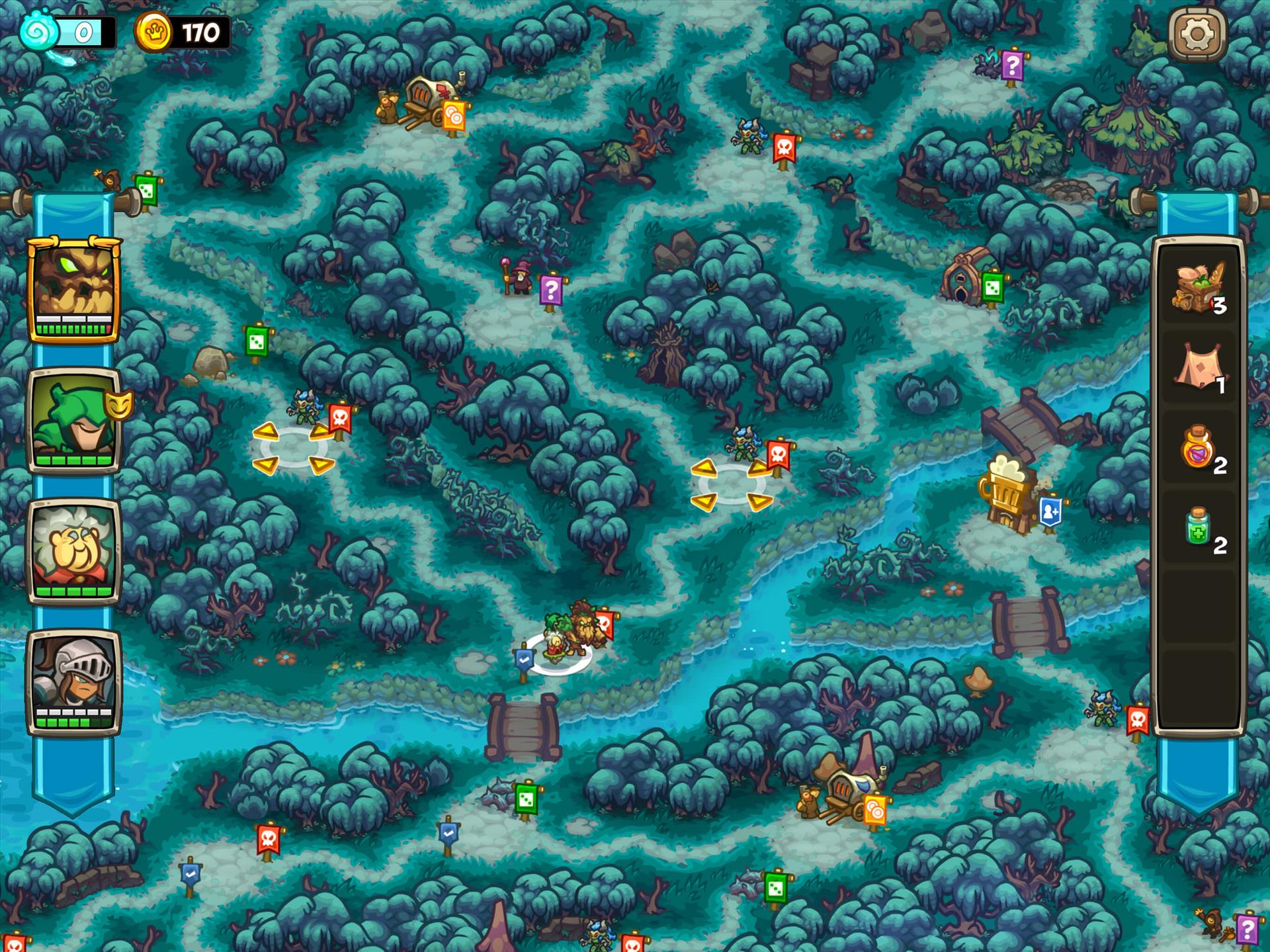 The last gameplay element that I wasn’t in love with were the items. Your team carries a small backpack that has bandages and elixirs. The pool of items you encounter seems weak, mostly different ways to heal your party. There is not much variation beyond that. I would like to have seen more items offering different affixes.

Even though Legends of Kingdom Rush began as a game on Apple Arcade, you couldn’t tell by the looks of it. The forests, mountains, and wastelands look great, even on a PC screen. Moving the game from phone to PC is not an issue when it comes to looks. But it feels like something is missing on the PC. It could be the lack of progress you make with your characters, as each time you play a new map their levels start back at one. Not much carries over from map to map. It could be the lack of rewards and items you earn in game, it doesn’t feel rewarding.

Saying that Legends of Kingdom Rush on PC doesn’t feel legendary is not to say I didn’t enjoy my time with the game. There is plenty of content to see, even through multiple playthroughs. Combat is a highlight, the AI does not let up on the harder difficulty. The leveling system, items, and dice rolls just don’t do it for me here. This is for people who want small gameplay experiences, with a lot of replayability. That being said, Legends of Kingdom Rush has a pickup and play vibe that I can dig while binge-watching tv.