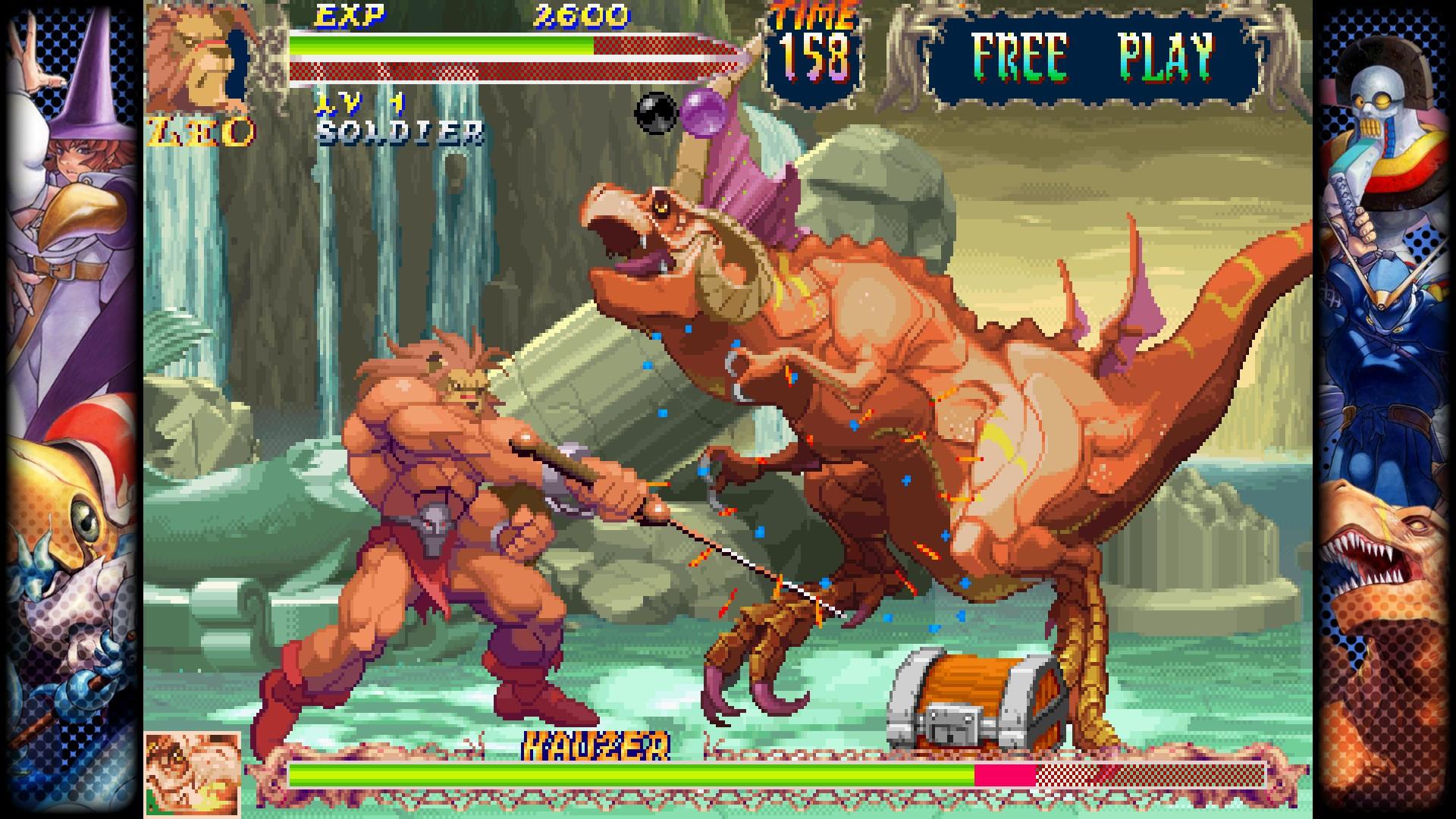 Written by Joseph Moorer on 7/2/2022 for PS4
More On: Capcom Fighting Collection

Capcom is the absolute ruler of giving you every game they've ever made, on pretty much every console you own. Their legacy content is everywhere. Capcom Arcade Stadium, for example, gave 32 arcade games all in one insane package. The Capcom Beat Em Up bundle came with 7 old school side scrolling beat 'em up games like Final Fight, and Captain Commando. Even the Street Fighter 30th Anniversary collection came with Street Fighter 1, all 5 iterations of Street Fighter 2, all three Street fighter Alphas, and all three Street Fighter III versions. Capcom wants to give you all the things, and their latest compilation is no exception. The Capcom Fighting Collection is here, and though I own most of these games via previous collections, or an Arcade 1up machine, this one surprised me. 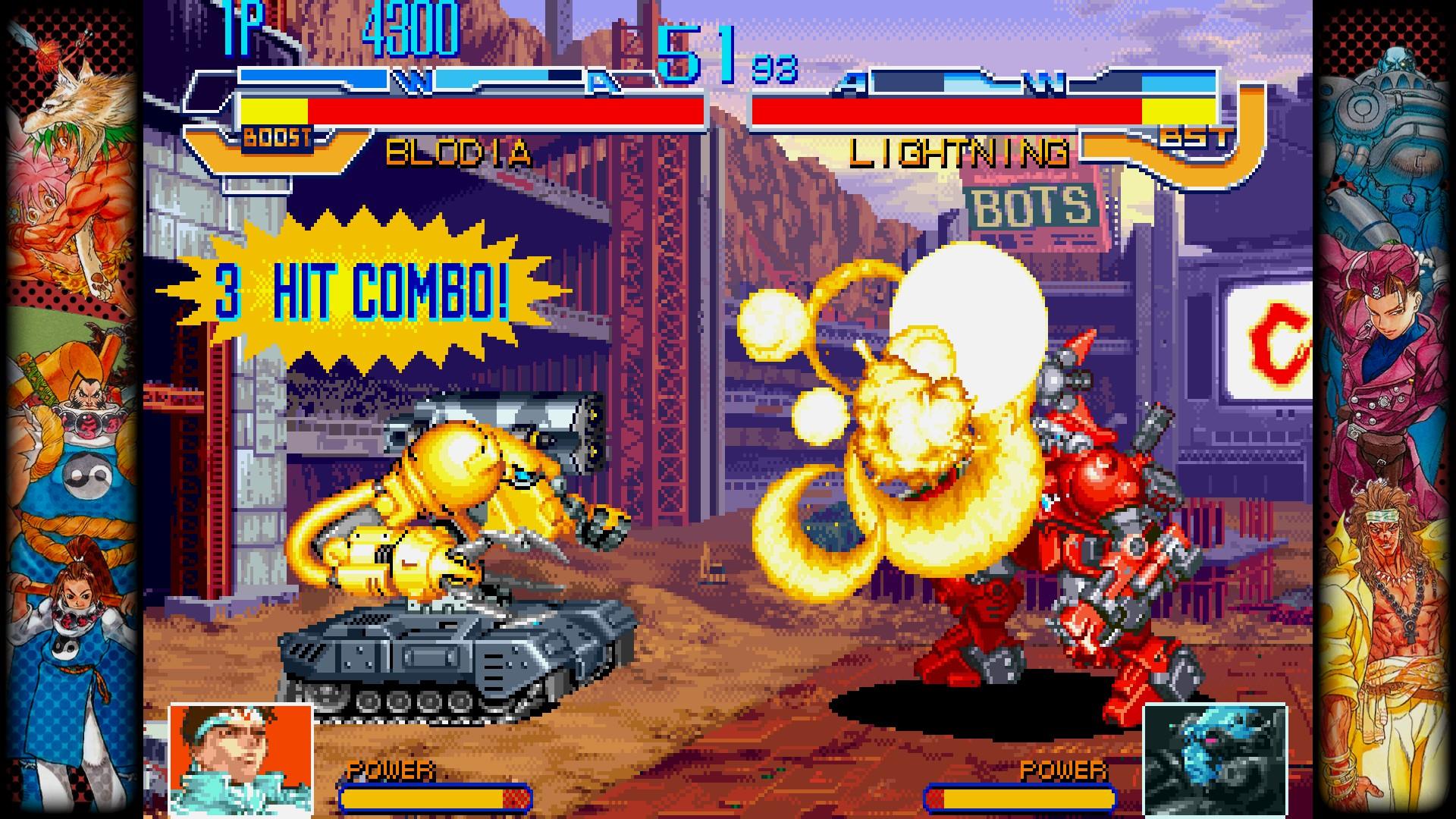 Capcom Fighting Collection gives you ten more games from it's fighting game history. When you start the game, you are greeted by The Epic Voice Guy (Jon Bailey from Honest Trailers) as he provides introductions and voice work for every single game in the collection. It's the first thing that stands out and makes this different. The menu music keeps the game going, and it contains little sound bites from each game mixed into the beat, as if someone went all the way in with their MPC board. 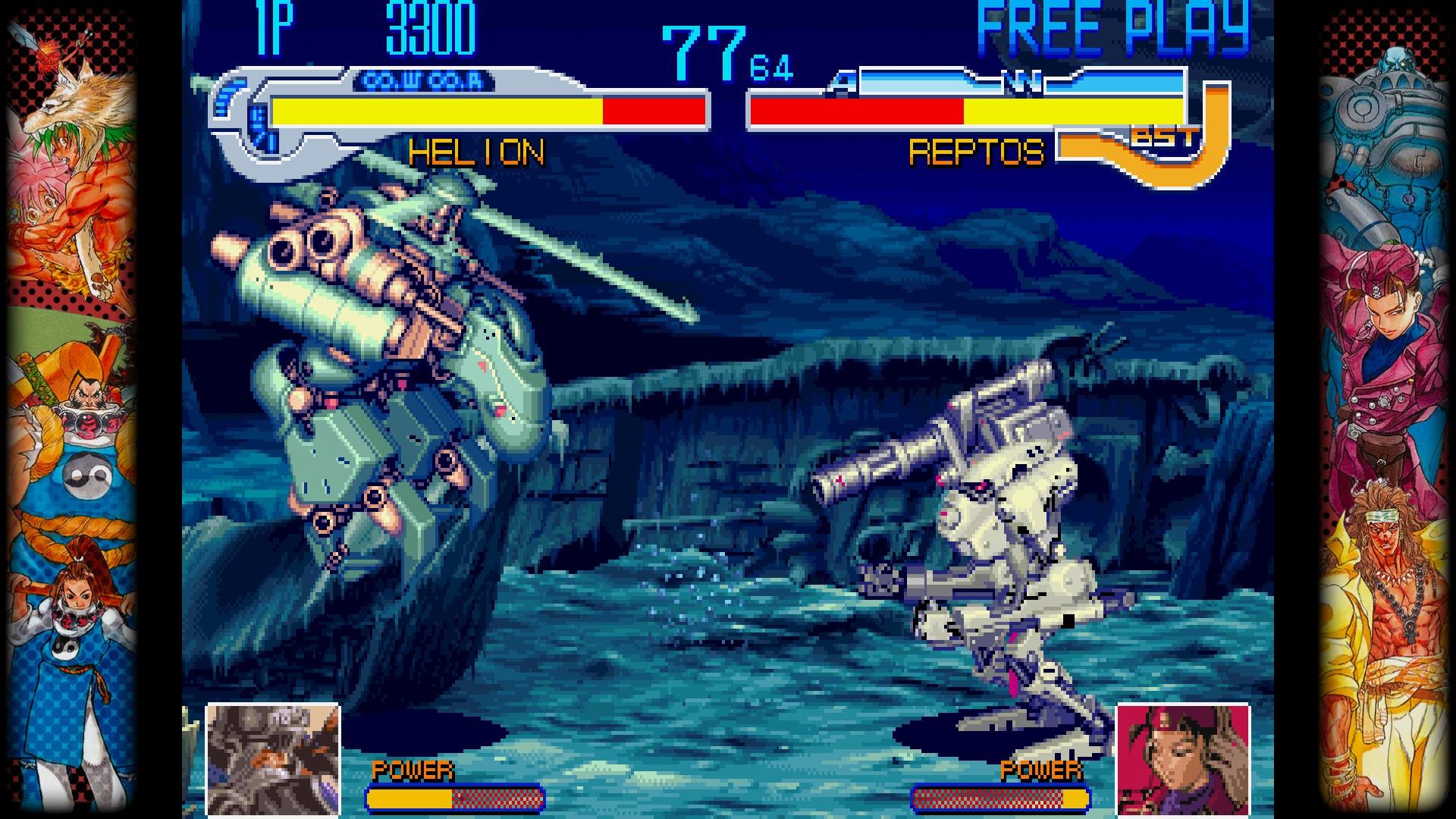 Capcom Fighting Collection's customizable options are pretty good, as you can change the volume of the sound effects, music, announcer, or the overall game. You can even change the "here comes a new challenger" jingle, which is different for each game. You can also change the online connection of your opponent. You keep this at "any", and those with the slowest connection will be able to challenge you. And that can be a little frustrating - no fault of Capcom's. You can change the button delay as well; that feature comes with the rollback netcode. It defaults at 4, but I pulled it down to 3. This is totally up to you, and don't let the internet bully you setting it where they thing you should. This choice is yours and yours alone. Furthermore, you have language options, and you can change your main system buttons. Even if you want a button to add credits. Free play is the way, by the way. Inserting coins is so yesterday.

The game also has a full museum. This consists of art and storyboards from all 10 games, and the overall Capcom Fighting Collection. Not only do you get artwork from the past, but you get a lot of commissioned fan art as well. You also get EVERY musical track from all the games. All of them. All the ending music. All the stage music. Intro and player selection music. It's all here for no reason at all, other than to bask in it's glory. An achievement system, called Fighter Awards also comes with this compilation. This is basically a board of achievements per game, which seems more beneficial for Switch users than anything else. Different missions and win streaks are a good chunk of these, but you know, achievements to me are like a participation award. I digress. The Museum is a nice touch. 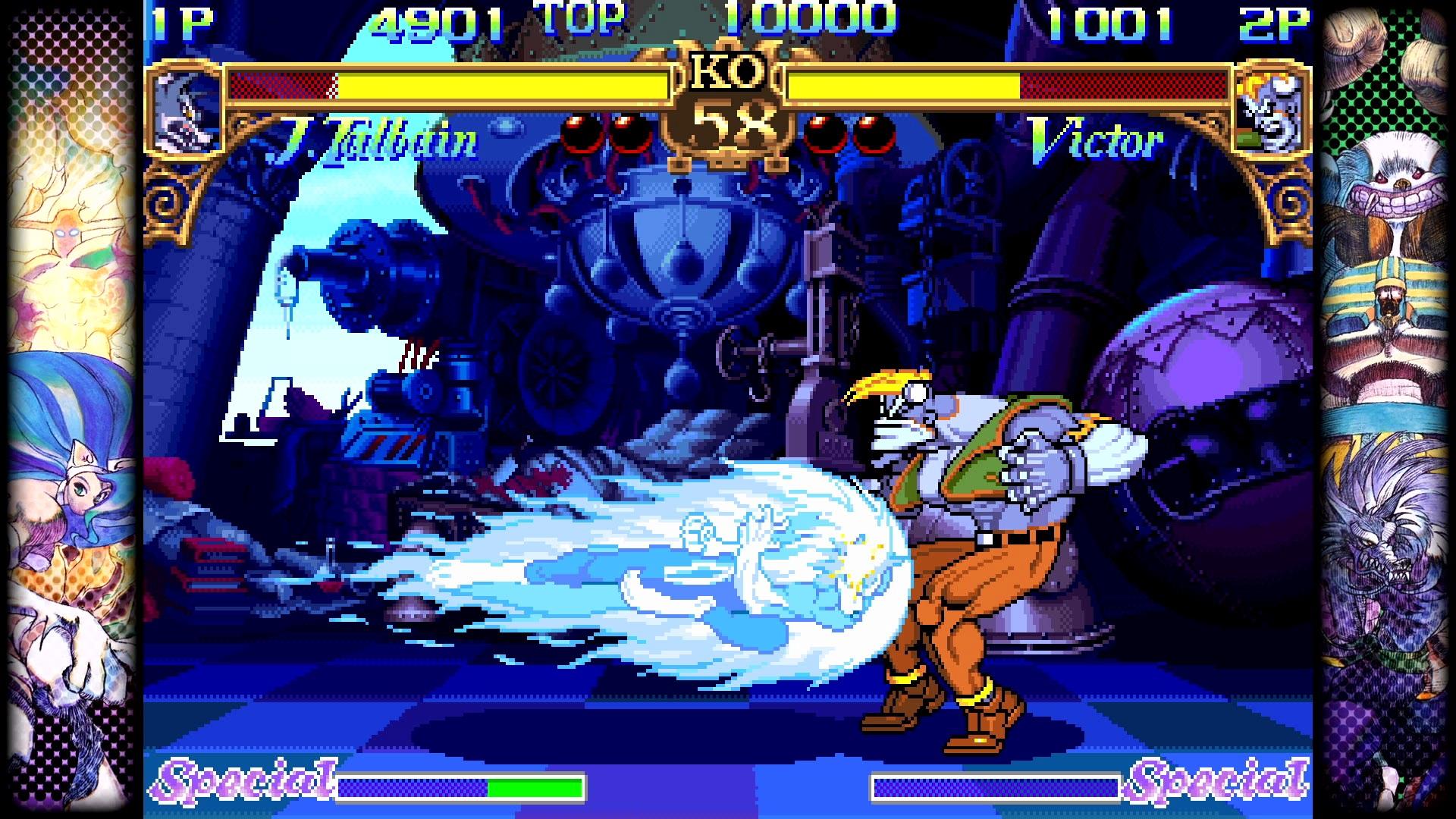 You have access to every game out the gate. Not only that, but you have every game in both USA and Japanese versions. There are subtle differences between games, such as names of characters in games, and even the titles. The mechanics of each game (I believe) are the same, but I'm sure most of the fighting game community prefer the Japanese versions of these games. Warzard (Red Earth) has it's first home release, and Vampire Hunter 2: Darkstalkers Revenge, and Vampire Savior 2: The Lord of Vampire are released in the USA for the first time in this collection. There are your typical scanline filters for each game, and you can even change the size of the screen from 4:3 to a 16:9 if you so choose. You can also customize your buttons. You can even map some of the most complicated button combinations to one button. (I'm looking at you, Darkstalkers). All the commands to each character per game are readily available with the push of a start button. The shining moment here is that all of these games come with a training mode, so you can learn all the things, or learn some things you didn't know. Once you get online, though, anything you don't retain will show, quickly.

The online mode is the absolute coolest thing about this whole collection. You can do casual matches, ranked matches, and custom matches. Custom matches lets you set up a private room and invite people to play you 1v1. You can customize it all the way down to the match count. There is rollback netcode for every game. When you choose ranked or casual match, you can choose which game or games you would like to be challenged in. If you want to only be challenged in Hyper Street Fighter II: Anniversary Edition (really the full name), you can do so, but if you want to be challenged in all the games, you can do that too.

The matchmaking is absolutely seamless. You can choose to wait in an in game mode, or even the museum. If you're in game, and you get challenged, it returns you right back to the start of the fight you were previously in, and puts you right back in the queue. You fight everyone in a best of three series, and the ranking points seem very fair. You can choose to fight people cross-region, and you can even avoid those who mapped a one button special to their controller, so you don't just get the raging demon every time you fight an Akuma (Gouki). 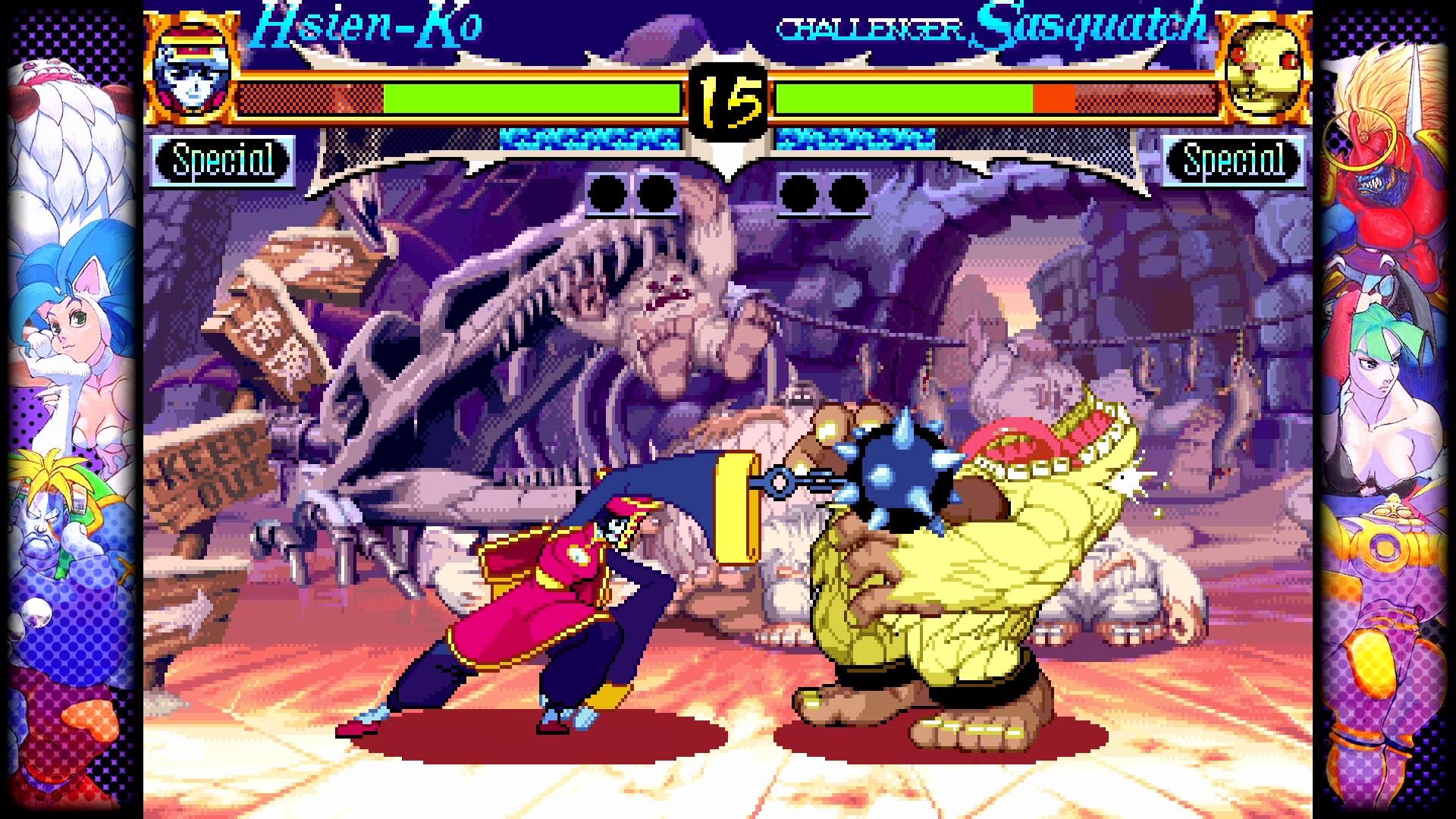 Some of these games have been released ten times over, with the exception of the mech fighting game Cyberbots, and RPG type fighter Red Earth. The Darkstalkers 5 game collection seems like a lot here, but perhaps Capcom is seeing if there's an interest in the series again. The differences in the three 1997 Darkstalkers games are primarily character-based. There may be a new move or two sprinkled in there. Pocket Fighter, or the super long USA name Super Gem Fighter Mini Mix was amazing when it released for the Playstation 1 years ago, and it still is here. Super Puzzle Fighter II: Turbo is what happens when you mix a pinch of Puyo Puyo with Street Fighter, and the characters here in both games contain chibi versions of your favorite characters. 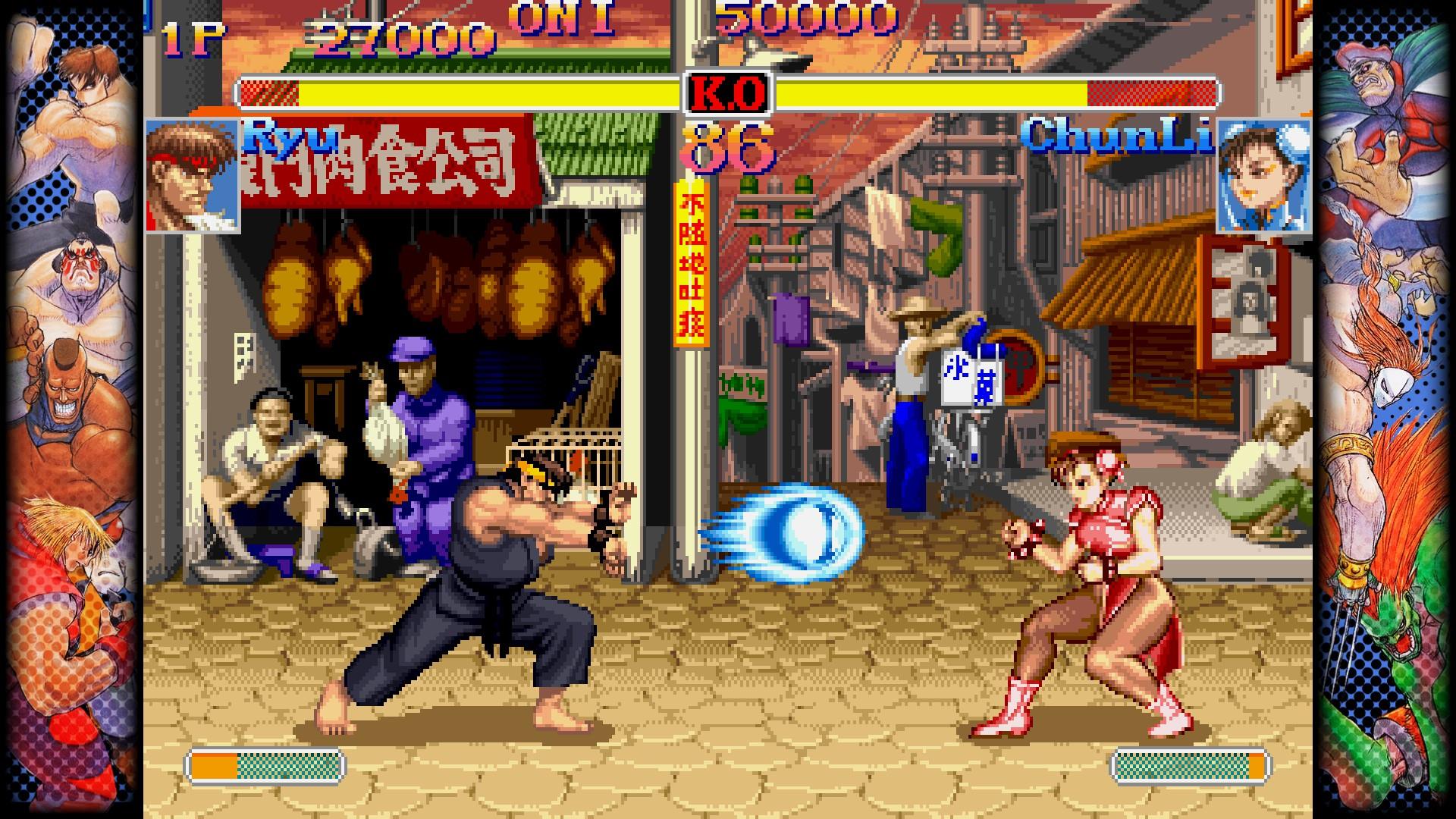 This is a great collection for completionists, and though I do have these games scattered all over my house in various forms, it's great to have them all together in one place. Veterans will find plenty of value here (particularly with the first-time releases, and with the tutorials included, the collection is a great way for folks new to Capcom's stable of games to see what all the fuss is about.

There are definitely some quality of life improvements to these games. The never-before-released games are super cool. This collection is a little pricey, but with the music, museum, rollback netcode, and internet features, I totally understand why. If you've been playing these games forever like I have, then you may pass this up. But if you want to see where it all started, plus see what other fighting games Capcom dipped their toes into, the collection is for you. Good luck climbing the ranks though- the old school gamers and the FGC are waiting for you at the top.