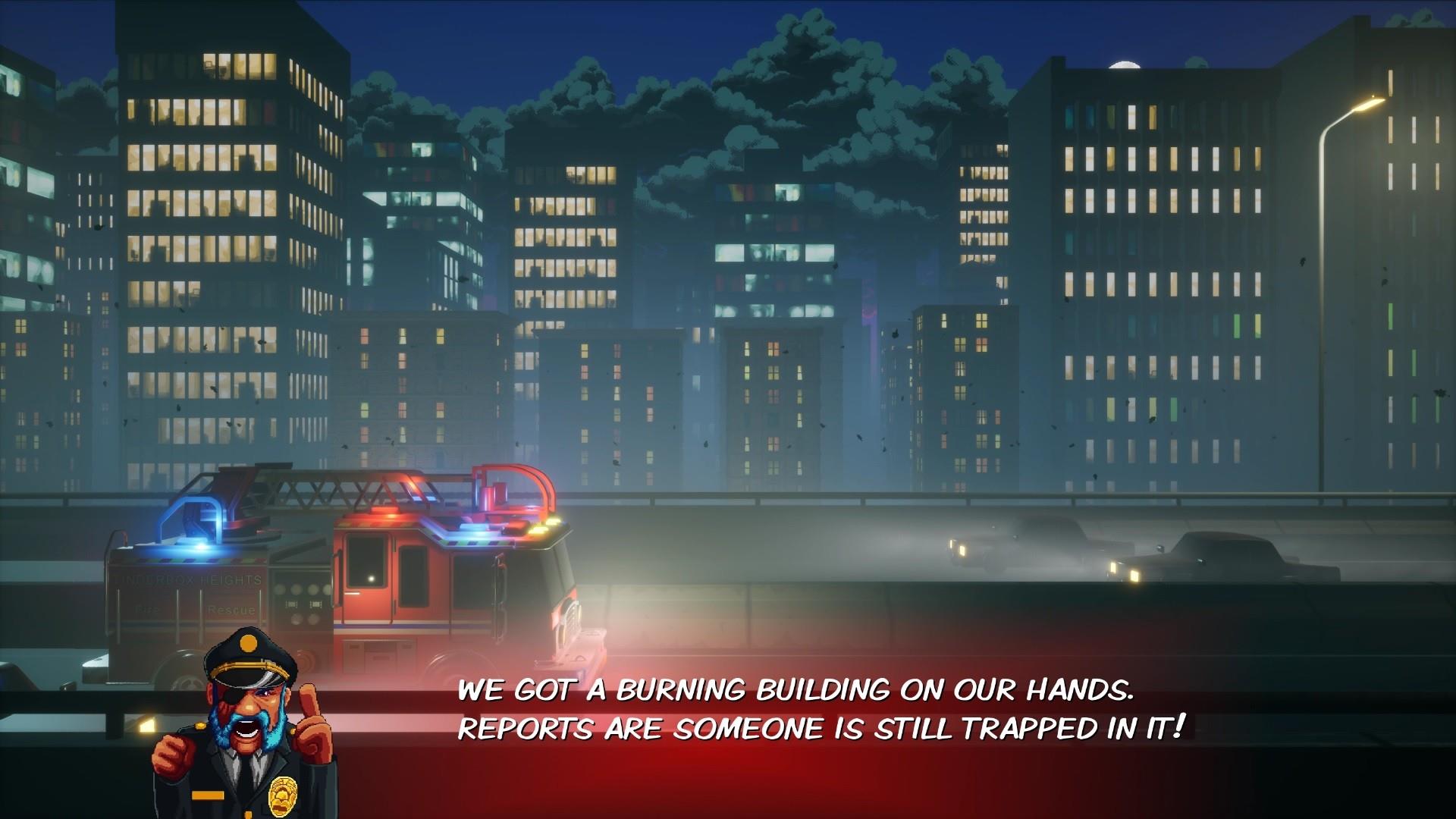 Firegirl: Hack 'n Splash Rescue DX looks like it could have been released during the prime era of the Super Nintendo. The music, pixel art, and dialogue are all cut from the same cloth as an old-school SNES title. It gives off a welcoming retro spark that Firegirl is desperate to deliver. They say where there’s smoke, there’s fire. Unfortunately the fire here is one that is frequently left on your doorstep by the neighbor kids who just want to see you stomp it out. Firegirl: Hack 'n Splash Rescue DX struggles to give itself a proper identity. Is it a Metroidvania that doesn’t provide a map? Perhaps a platformer with platforms that are sometimes impossible to reach? Or could it strive to be a Roguelike whose map changes in the middle of a run? 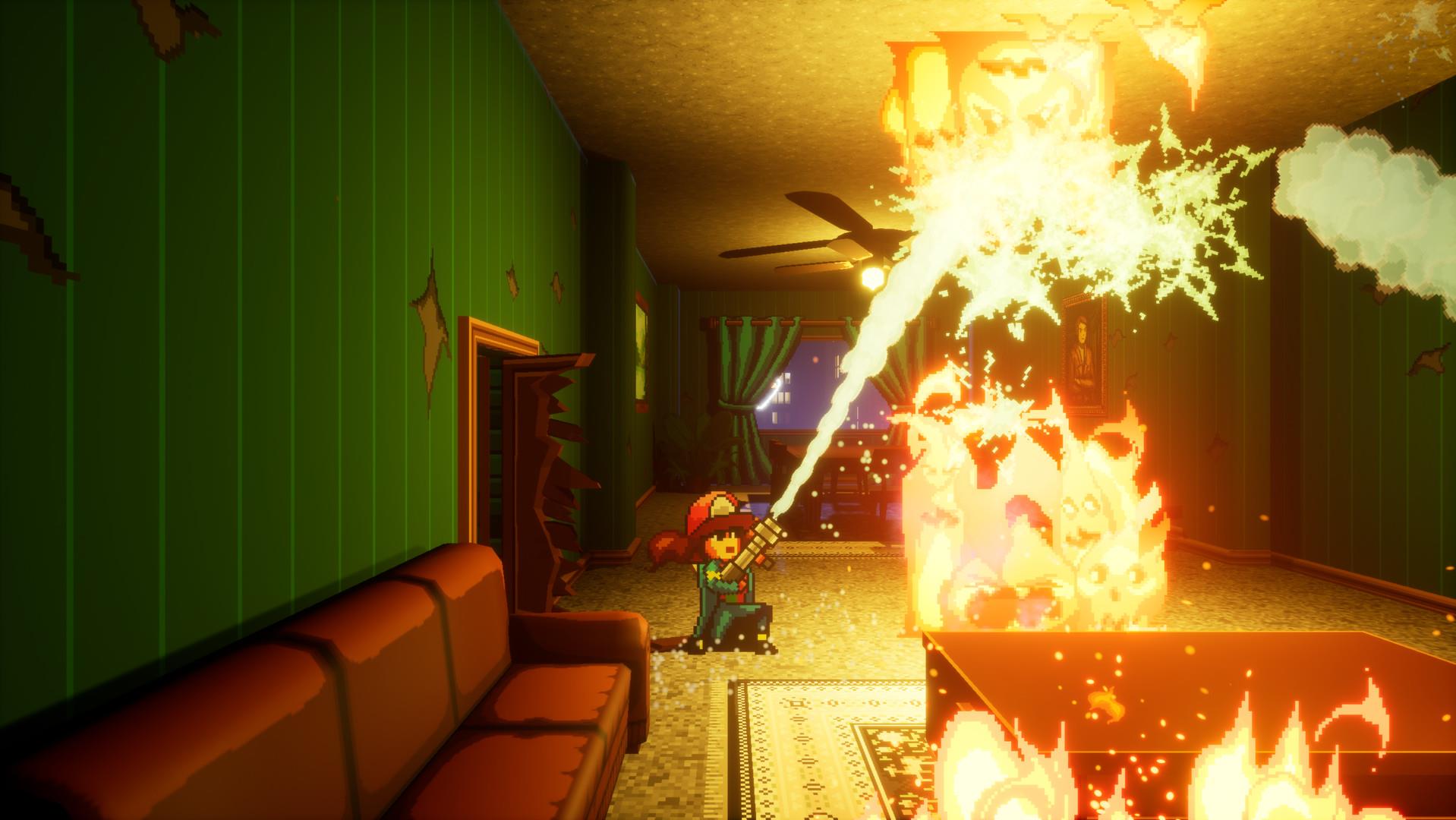 Each mission in Firegirl: Hack 'n Splash Rescue DX involves showing up to a fire, already in progress, and attempting to save all the animals and people trapped within. Once you’ve hit your quota, escape becomes your next priority. But you can not simply go back the way you came. You’ll use the tools of a firefighter to find an exit. You can use your axe to tear through most non-fire related problems, like a stack of wood conveniently in your way, or a door that is just asking to be bashed in. When you come across fire, or fire demons, use your hose. The hose can also help boost your jumps to help reach new levels; it’ll even cushion your fall as you try to jump to safety.

Missions don’t take long to complete; a single mission takes less than five minutes. There’s a countdown clock that starts at the beginning of each mission, telling you how much time you have to clear that run. Early on I had very little success completing a mission. I would die, or run out of water in my hose, not able to fully complete the goal of that run. In fact, it took me five missions before I was able to finish one. Runs are procedurally generated, so they’re never completely the same, but I honestly could not tell. Every burning building looked identical to the next. Eventually you get caves, and moving trains, which look great. But for the most part I felt as though I was constantly fighting the same fire. 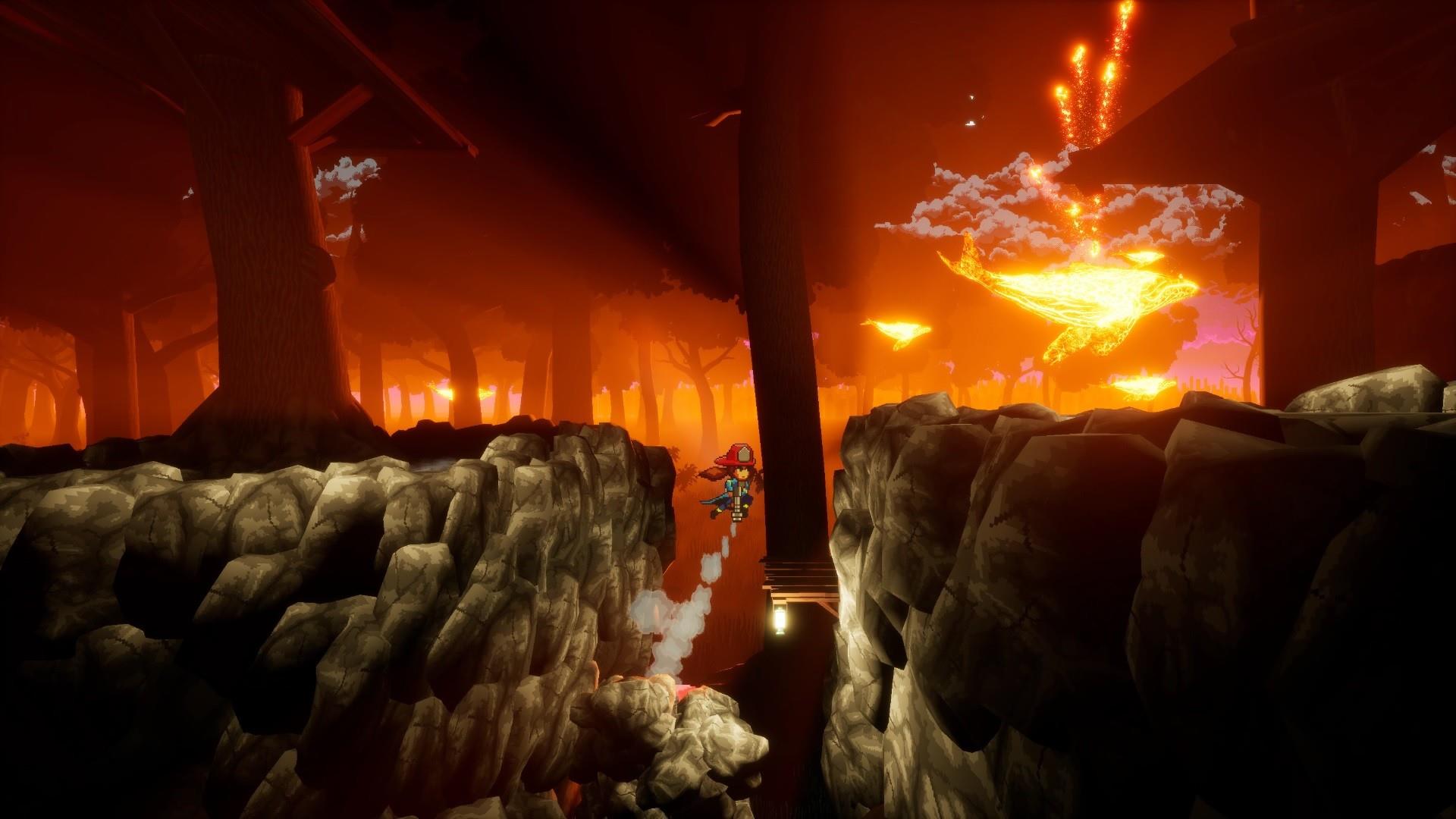 Firegirl: Hack 'n Splash Rescue DX looks great. In fact, I was drawn to the game because of the art style. The mix of 2-D characters put onto a 3-D backdrop sells me instantly. The retro look goes well with all the other retro elements Firegirl presents. The sprite art of Firegirl is on point too. However, once you get going you begin to feel a terrible backdraft. Often in the game it becomes difficult to see. Firegirl: Hack 'n Splash Rescue DX is meant to be played at a fast pace. You need to hurry and look for survivors, and then get out as soon as you can. I found it hard to locate the correct direction to go, getting stuck in areas, or running out of water in my hose that was needed to jump to the proper location. It feels as though the camera needs to pan further out to get a wider view of the situation. This also led to a handful of what I felt were cheap deaths.

Controls are another obstacle to overcome. General movement is about the only thing Firegirl gets right here. I need to take my axe out and smash a door in to continue on when I’m in trouble. I can push the button to tell her to take a swing at something, but she takes her time in doing so. Trying to hurry doesn’t help when you have to swing your axe to continue forward. The time between pushing the button on my controller and when I actually swing my axe is simply too long. If I’m being chased by a firebat (a bat on fire) the bat will catch up to me before I can break through the door to move on. 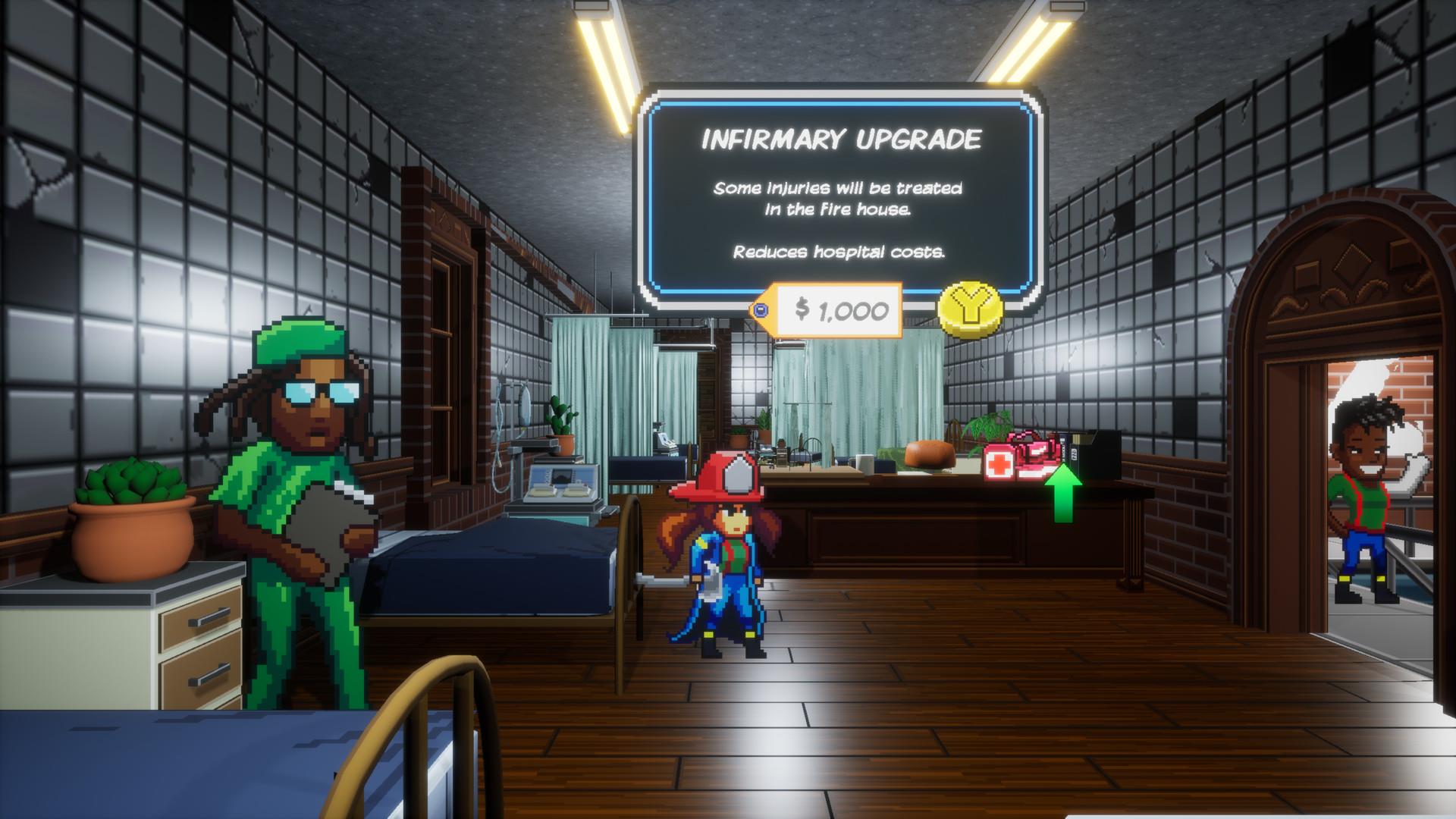 The other control issue is with your hose. The main tool for fighting fires and moving up and down platforms annoys me like no other. In order to get to an area that is higher up than a standard jump, I need to use my hose to shoot me up. In order to get the jump to work I need to get a running start - if not, I just hover over the area wasting water. The problem with the running start comes back to the screen issue. I need to be able to see further away. I would try to take a running start, only to encounter a wall as soon as I would jump. The hose also is horrible as a tool to fight fire and fire demons. When you use the hose it stays in that exact location the next time you use it. If I was attacking a flame directly above me, and a few seconds later need to fight one directly in front of me, the hose is still pointed to the sky. I now have to slowly lower the hose to aim it in front of me before using it. I also have a pressure gage that slowly goes down as I use the hose, meaning I can get stuck in a situation where I have to use my hose to jump to the next platform, the hose flames out on me in times of desperation. 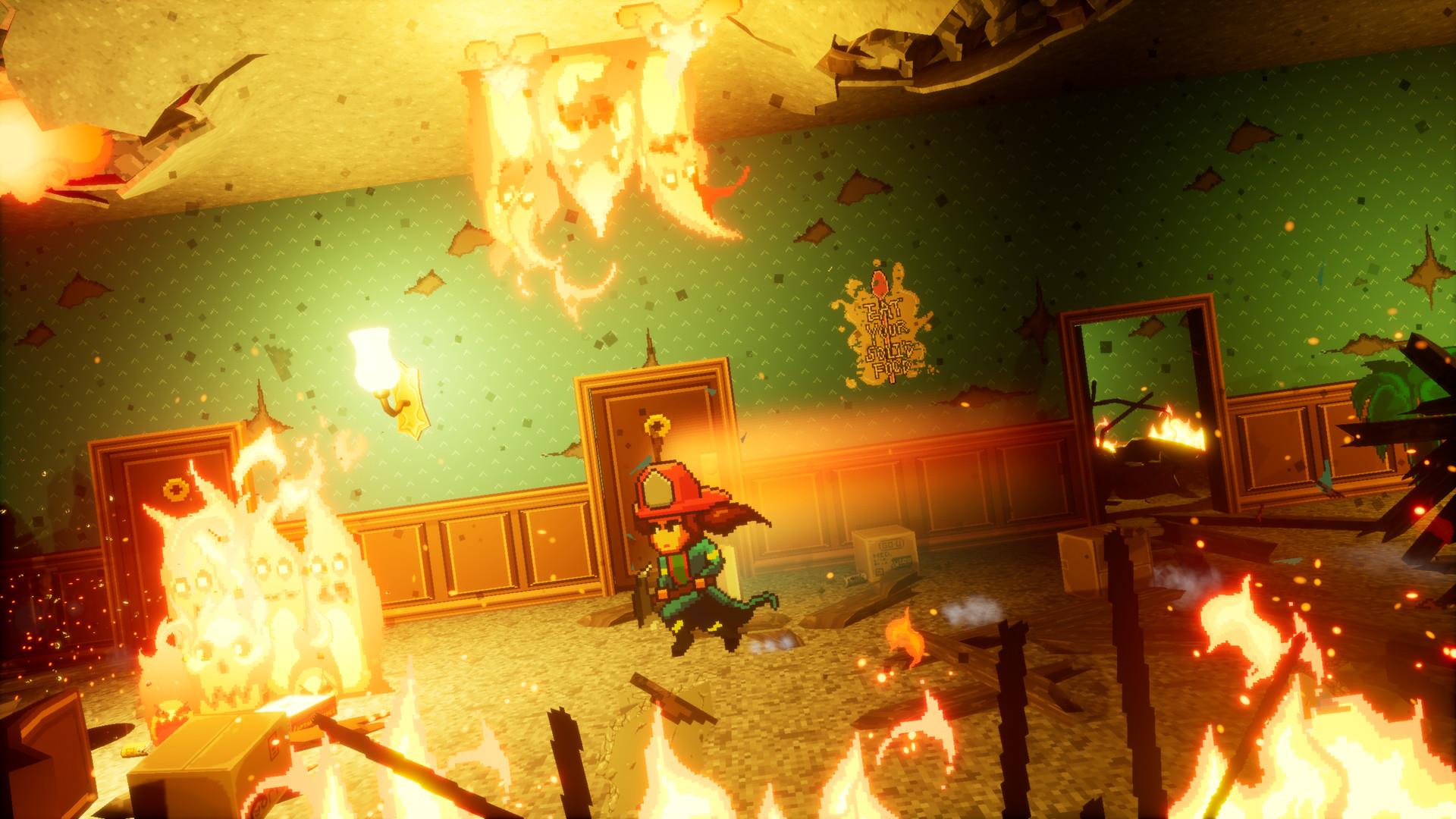 Firegirl: Hack 'n Splash Rescue DX doesn’t know what genre it wants to belong to, not sticking with one long enough to come to a decision. It’s closest to a platformer. But at times when I have to platform I simply cannot, due to not having enough pressure in my hose to make a jump. It wants to be a roguelike as well, but doesn’t follow many of the established roguelike rules. It also bills itself as a Metroidvania. But there is no map, and very little back tracking on missions. Not leaning into one genre enough and only taking small elements from each make Firegirl feel repetitive quickly. Tacking on a story that has no twists or turns to speak of makes it feel like a bit of a chore after a short time. The flame is bright at the onset of the game, but quite a bit dimmer after a handful of hours.

There is a reason you’re not supposed to judge a book by its cover. At first glance Firegirl: Hack 'n Splash Rescue DX gives off the vibe I’m looking for. A great retro vibe with 2D-HD and a soundtrack to match. But once you start turning the pages on the game you notice all the shortcomings. A predictable story, platforming that feels impossible, and the repetition. The biggest issue of all is controls that don’t respond when you need them to. I easily became frustrated and bored with Firegirl: Hack 'n Splash Rescue DX.

Firegirl: Hack 'n Splash Rescue DX is kindling; easily combustible and not much else. A platformer that makes platforming impossible at times. It also wants to borrow from roguelikes and Metroidvanias, but ends up taking all the wrong elements from them. Firegirl feels repetitive well before it should, including a camera that frustrates and leads to cheap deaths. The art of Firegirl is excellent. The 2D-HD made me feel like I was sitting in the living room of my parents house and I was nine years old again. But that’s nothing more than smoke and mirrors.