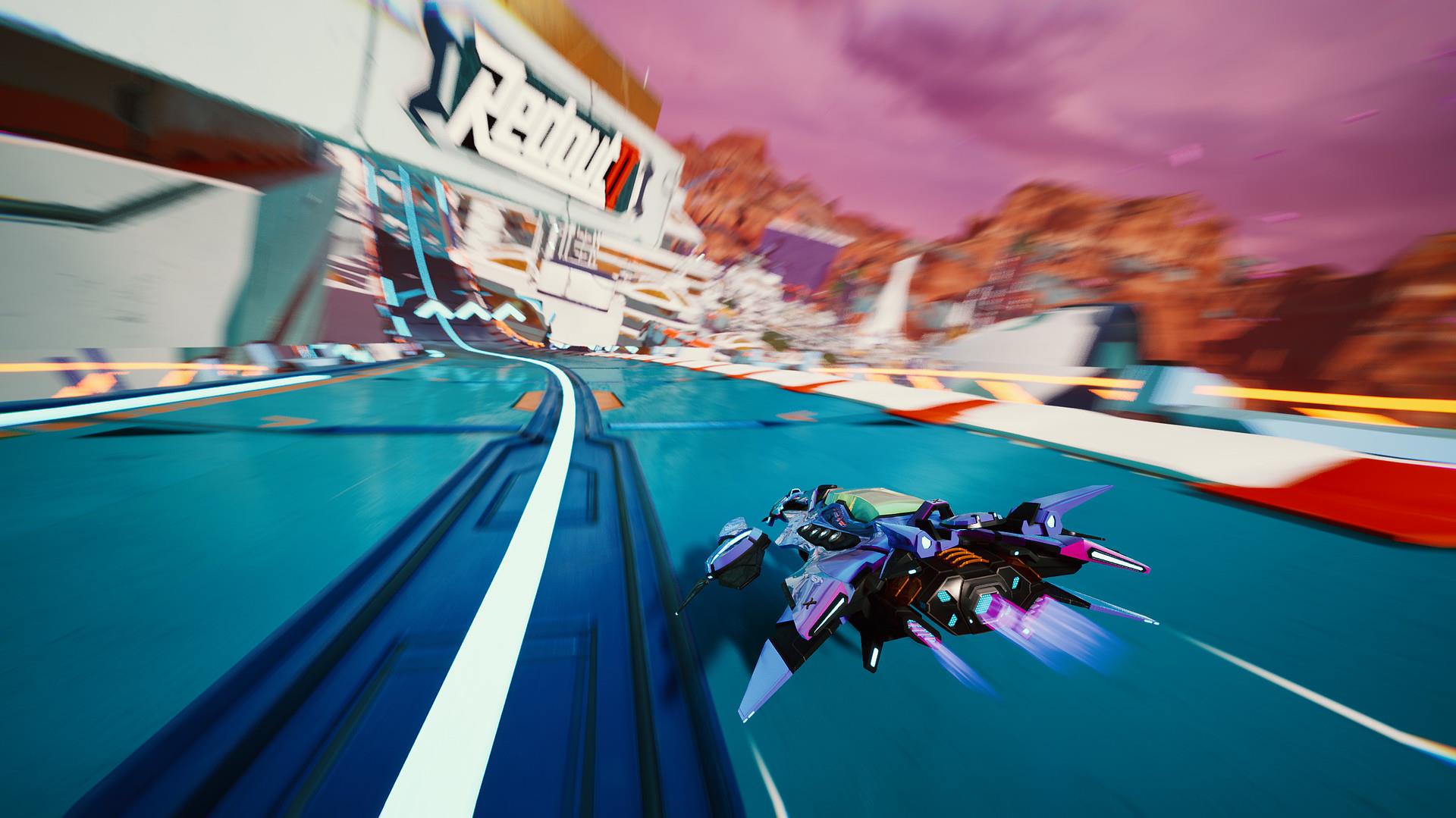 Anything futuristic and visually aesthetically pleasing always manages to catch my eye, and that is exactly what Redout 2 did with its simplistic yet sophisticated depiction of advanced racing technologies. There’s definitely a lack of racing simulation games in today’s day and age, let alone games that pay homage to old school futuristic racing games. Redout 2 is the newest anti-gravity high-speed racing simulator from developer 34BigThings. It is a direct sequel to 2016’s Redout and a tribute to classic arcade racing games such as F-Zero and Wipeout. The game more than delivers its promise on hyper fast racing in a cyberpunk-ish world, but falls short on just about everything else.

Redout 2 differs from most racing games in the sense that there is no drifting, but instead both analog sticks are used to control both turning, strafing, and pitching. Strafing on the right analog stick leans your vehicle left and right whereas pitching leans it up and down. Unlimited boosts are a thing, but it comes at a cost to your ship’s health. You must master strafing tight corners and pitching vertical dips, in addition to efficiently boosting to preserve your ship’s vitality in order to achieve the fastest possible scores. Given that the nature of this game revolves around speed, the difficulty curve is exceptionally higher than other racing games. Slowing down, crashing, or flying off the track pretty much guarantees a loss against the AI. 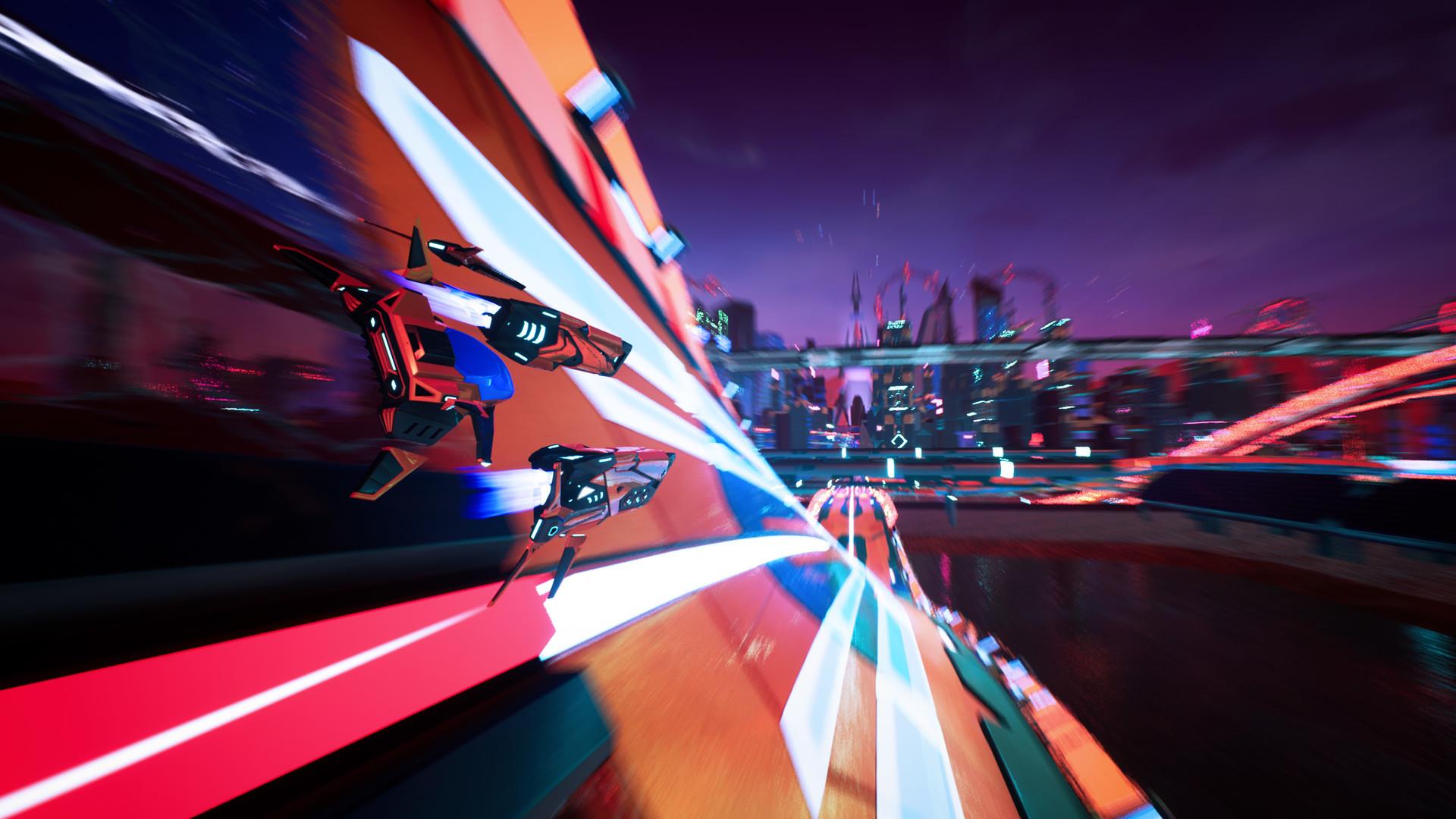 Accessibility options in today’s gaming industry are more and more prevalent, but Redout 2 contains little to none of these concessions. The twin stick mechanic is janky, and a slight mis-shift will cause your ship to hit the rails or off the track completely. I’m not someone who has a lot of extensive experience in racing games, let alone high speed anti-gravity ones. Most of the game, even the multiplayer, is locked behind a mandatory tutorial section. The enemy AI drives far too perfectly, even on the easiest difficulty, and some of the time requirements for certain modes are unreasonably hard. I’m sure the game will be extremely satisfying once everything comes together for players, but I reckon the game just isn’t fun in the journey to master everything.

The campaign of Redout 2 is undoubtedly a beefy one, but contains more or less the same activities on repeat, so prepare for things to get stale faster than the vehicles themselves. You start off in the Trials, which are freakishly difficult to get past, especially the speed one. The Trials are essentially the game’s tutorial, and once you get past this section, you are launched into B League and make your way to the SRRL Invitational. For a newcomer that hasn’t played the first Redout, I have no idea what SRRL stands for, and the game makes little to no effort to fill the player in on its lore and backstory. If you must know what SRRL stands for, I googled it, and it’s Solar RedOut Racing League. No idea what that means or what it entails, but sounds cool! 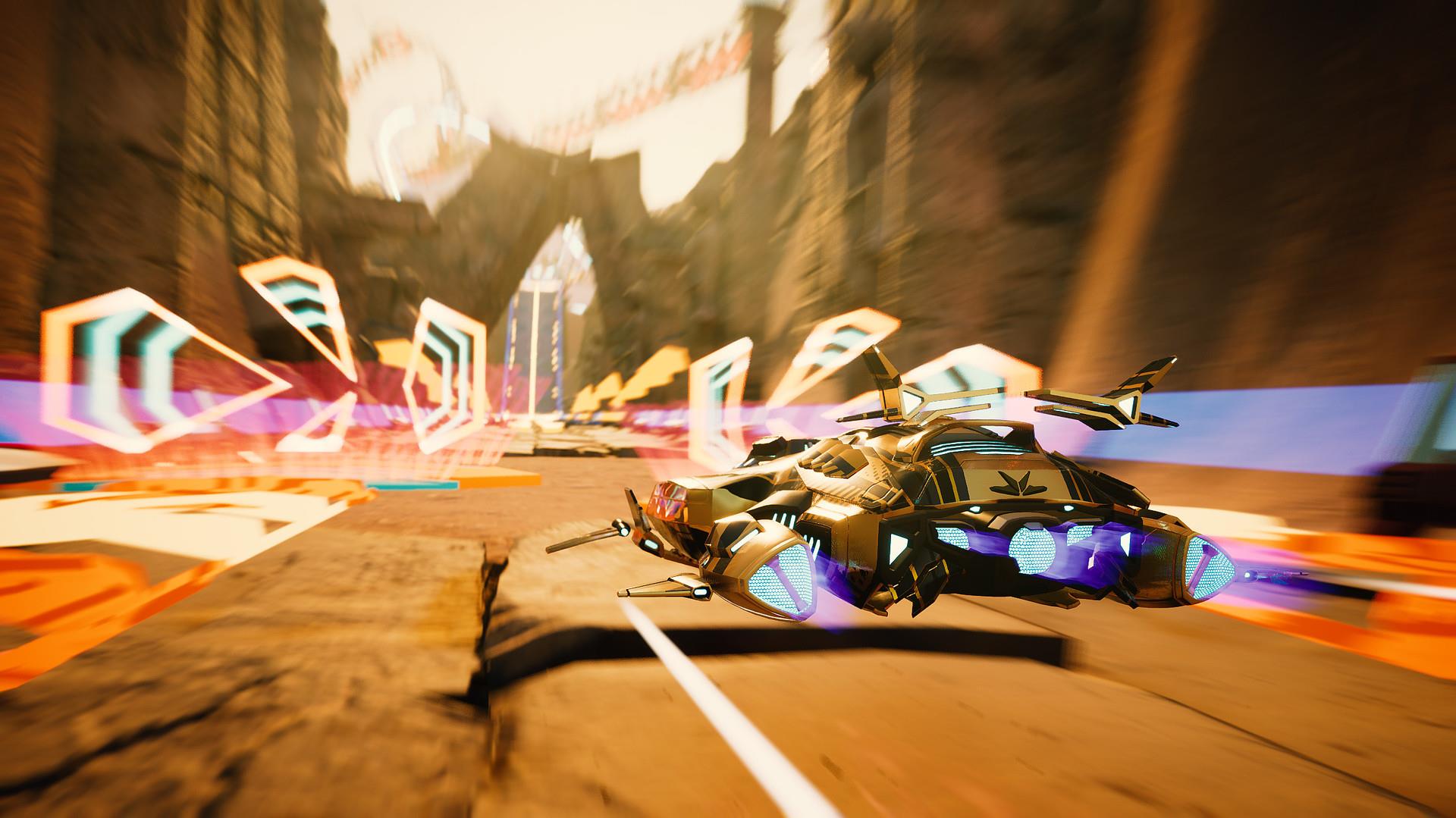 There are six modes featured: Time Attack, Race, Arena Race. Last Man Standing, Speed, and Boss. Most of them are self explanatory and unfortunately don’t differ too much from one another. You rinse and repeat a variety of them in each career League until you get promoted to the next. Redout 2 does contain ten distinct locations with seventy two total tracks to race in. I will say that the race tracks are extraordinary, portraying futuristic versions of real life locations such as Tokyo and Cairo. Each location is pristine and aesthetic in its own way, serving up a cinematic experience just as much as a racing one.

Customization and ship variety are also dissatisfying, considering you start off with one ship, and can only upgrade different parts of said ship instead of unlocking new ones. There’s no cash or in game currency to buy better parts, and the only way to get better gear is to complete events. This further exacerbates the repetitive nature of the career mode. The same concept goes for cosmetic options, as color schemes and components can only be unlocked through cycling through career events. Upgrade paths are extremely linear, and quite frankly, boring because none of them make a substantial difference in my vehicle’s performance. 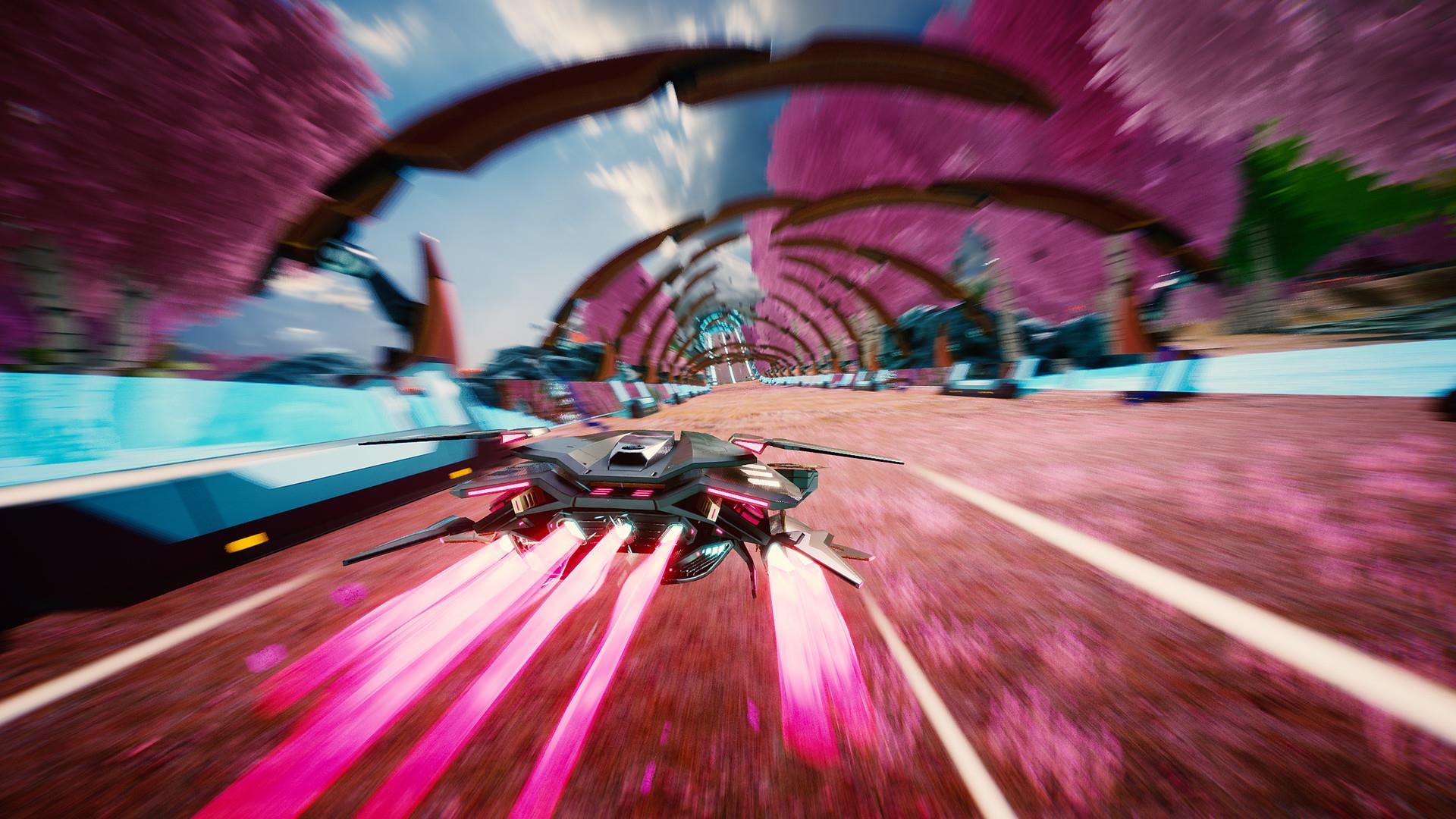 It’s a huge disappointment that this game does not include a local/couch co-op option. At launch, Redout 2 only has random online multiplayer matchmaking. Ranked player versus player races, seasonal challenges, and community modes are all unavailable until further notice. At times, this game feels like an incomplete project that was haphazardly shipped out to meet a deadline. Online matchmaking takes an absurd amount of time to actually find other players, and you can’t even host games to customize settings. The maps and modes are completely randomized. The times that I was matched to an online session were with only one other player, so don’t even expect to race against a full roster of eleven other players online. The player base just isn’t there.

I almost blacked out playing Redout 2 due to the bugging out of the menu screens. The game’s HDR implementation is probably the worst I’ve ever seen in a game. The introduction cinematic is completely oversaturated with colors to the point where it burns my eyes to look at. Everything in the actual game looks washed out and pale. This is absolutely unacceptable in the full release of a game. There has been no communication from the developers on fixing this in a patch, and the only temporary solution I could find was disabling HDR from within the PlayStation 5’s settings, not even the game settings itself.

Redout 2 is not a game I recommend for newcomers of the series or even the genre. Unhelpful and unintuitive tutorial sections paired with insane difficulty spikes make it extremely off putting and frustrating to say the least. I do, however, appreciate the developers filling a niche genre for simulation racing veterans.

Redout 2 is a game that looks amazingly sleek and fun through pictures, descriptions, and videos. The facade is dropped when you actually play the game for yourself, and find a slew of poor design choices, unnecessary difficulty curves, incomplete features, and repetitive gameplay. This doesn’t even include the atrociously implemented HDR that burned my eyes and gave me a headache. Even if you’re a fan of the genre, I recommend sticking with the first Redout until this sequel is heavily patched or discounted.