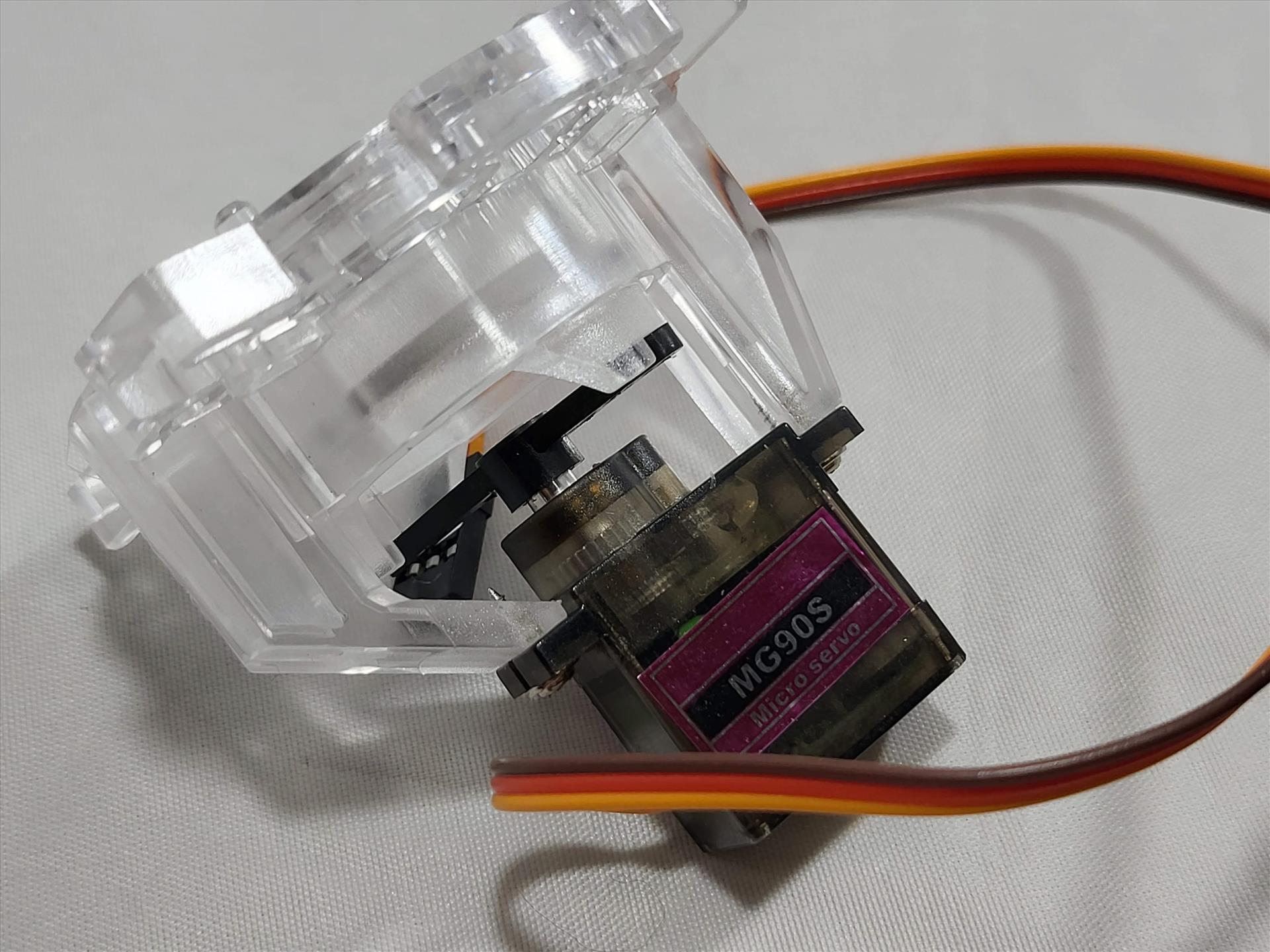 Having spent the better part of 2020 building an arcade cabinet, I was looking for ways to improve the experience of playing old arcade games. One thing that bugged me was the way 4-way games like Pac-Man, Donkey Kong, and Burger Time were really hard to play with an 8-way directional joystick. You'd miss moves pretty easily with an 8-way joystick causing you to die pretty quickly.

Sanwa joysticks have a nice little gate on the bottom where you can switch between 4 and 8 way operations. You just have to take it off, rotate it, and stick it back on. It’s not a hard process, but it can be super annoying, even with my setup where I can flip up the control panel to access the wiring underneath. 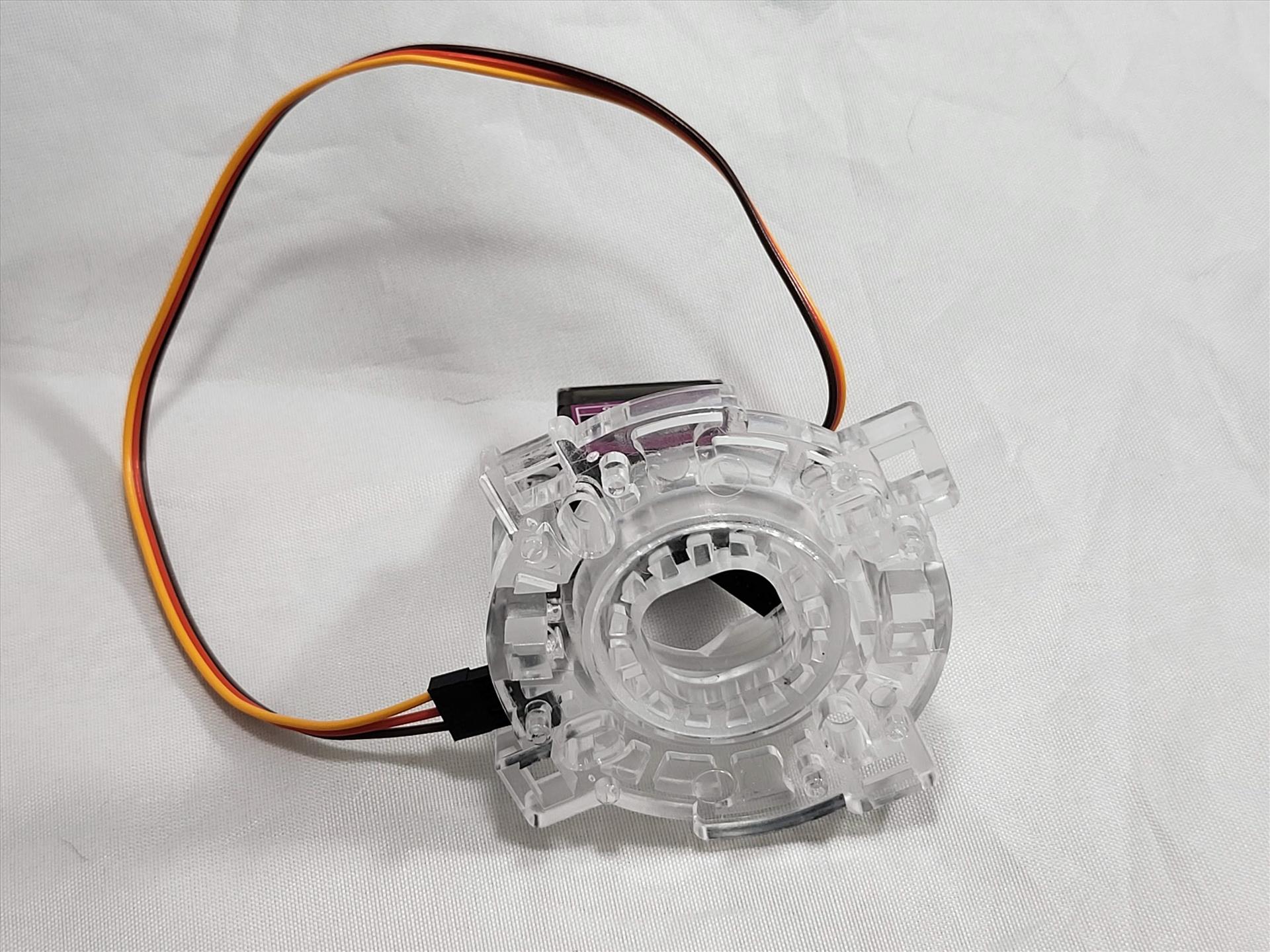 There have been a few places that offer mechanical ways to switch between 4 and 8 way operations, but one that caught my eye was developed by Stefan Burger. It consisted of a small servo that turned a gate, and it was controlled by a small control board plugged into a USB port. I tried contacting Stefan a while back to purchase a pair, but he told me he was going to partner with someone to try and get these on the mass market easier.

Enter the Glen’s Retro Show and Thunderstick to produce and sell the TOS GRS Switchable 4-to-8-Way Restrictor for Sanwa Joystick. The setup comes in two packages, one with the control board, servo gate, dual button, mounting pegs, and wires, as well as one without the control board. The reason you can buy a package without the control board is that the board can control four servos, so if you already have the all-in-one kit, you can just get the extension kits and plug them into the single board. The extension kit also features a Y-cable if you want to plug the button into a joystick encoder.

Setup is super simple. Just take the restrictor gate off your current Sanwa joystick, stick the GRS Switchable one on, plug in the wires, and connect the control board to your PC or Raspberry Pi via USB. On Windows, there’s a program you’ll need to use to fine tune the gates as they’ll most likely be a little out of alignment when you put them on. I had to adjust both of mine and what I found to work was getting the 4 way working, and then for the 8 way, adding or taking away 50 degrees, depending on what the first number is. For example, if it’s working really well on a 4 way setup of 25 degrees, set the 8 way to 75 degrees. If it’s working at say 78 degrees for 4 way operation, set the 8 way to 28 degrees. I had to adjust both of mine before they both worked really well, as - if it’s not at the right rotation - you’ll miss the diagonal presses pretty easily. The settings are saved on the controller board so you can adjust them and not have to run the program again for it to work. 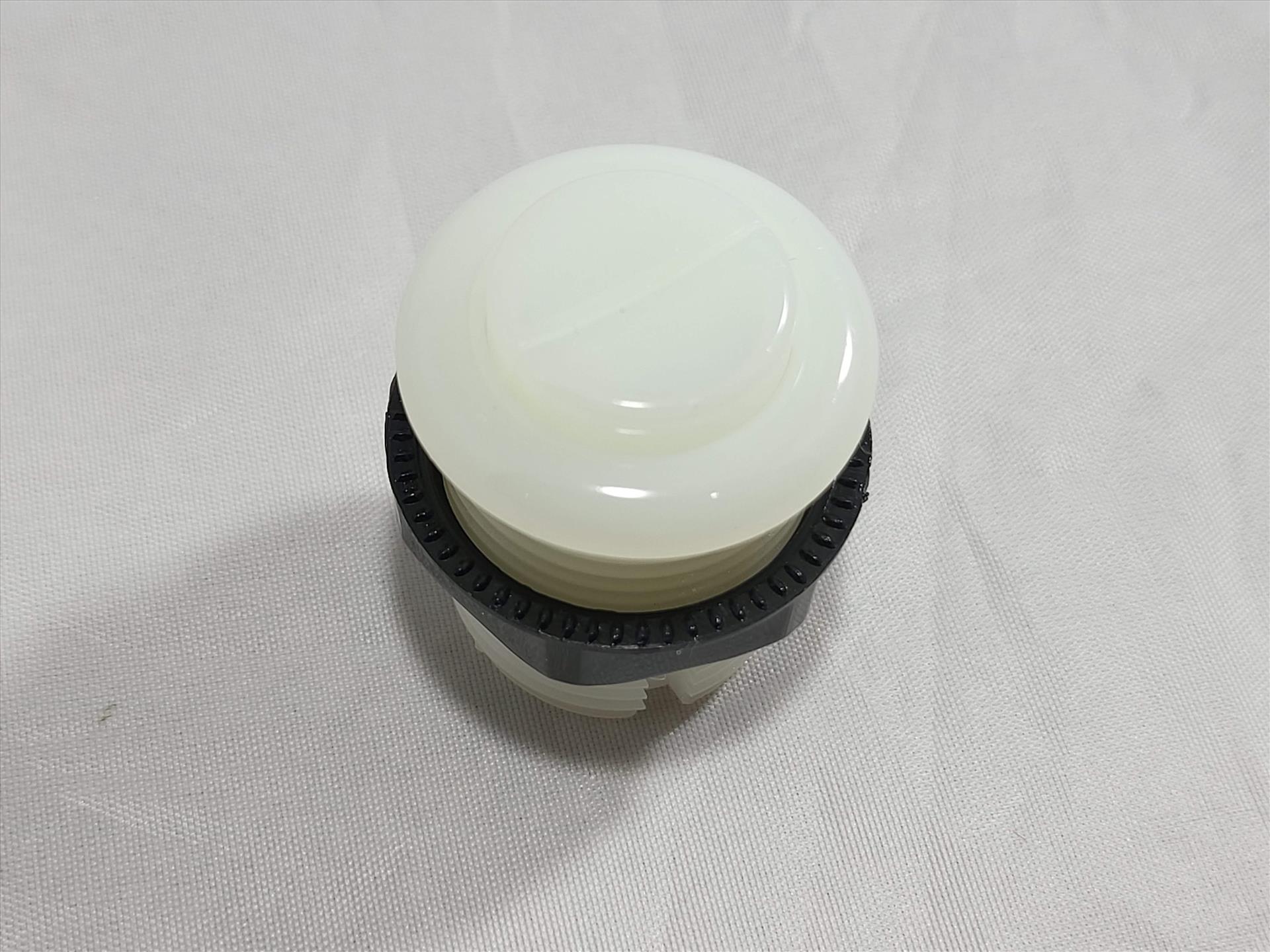 Be warned though, as the servos do extend a good amount from underneath the sticks. It’s roughly 1 ⅞” inches below the restrictor plate that you’ll need some free room for these to sit in. You might have to drill some holes to allow the servos some room to sit when your control panel is in place. Luckily, I didn’t have to do anything in my arcade machine I picked up from Microcenter, other than compensate for the fact that the second player joystick did push a little into one of the front facing buttons. It took a little finagling, but I was finally able to get everything to sit flush.

The plastic for the gate is very strong and feels very durable. When playing with the gates in various positions, they never moved or slipped. It feels like they are meant to last. I was pushing hard on my play through of some of the 4-way games and never felt the gate budge. Same when switching over to 8-way and playing fighting games that have multiple joystick inputs for special moves.

You can manually switch the gates with the included button or use software to do it, which can really be pretty slick. Let’s talk about the button first. The package comes with a split arcade size button where you can press one half or the other half to switch the gates. The reason GRS included this is that you can take out say one of your player select buttons and replace it with the gate switcher to do the manual gate switching. The button has a customizable RGB LED to give you a visual cue of what position the gates are on. It comes with a default of blue being set to 4-way while red is set to 8-way. Using the included program, you can change the color scheme to whatever you want though. As mentioned before, you can setup Launchbox to launch a command line utility to switch the direction of the gates. I had it so going into a game that used 4-way directional controls, it would rotate the plate to 4-way and once you exit the game, it would switch back to 8-way. If you have all your games setup, you could theoretically not even need the button, but I would suggest to keep it handy in case the command line doesn't fire or you find yourself in a game that didn't switch and would like to switch it.

If you do replace one of the coin buttons or player start buttons, you can use another dual button and set them to do the coin or player start as well. If you have two switches, you’ll have two buttons to use so you can keep all the functionality of your control panel without having to make another hole for more buttons. I went ahead and replaced one second player coin button because I never used it.

Switching from 4-way to 8-way and vice versa is really, really quick. It probably takes a half second or so to switch, and the response after pushing the button is almost instantaneous. You’ll hear the little servo motor activate when it happens. There is a pretty satisfying audible sound when it does, and you’ll definitely feel the difference once it happens.

The instructions come with information on how to use the Switchable 4-to-8-Way Restrictor on Windows or Raspberry Pi,. What’s nice is that there are instructions on how to modify Launchbox to automatically switch the gates based on the game you play. It utilizes a command line utility that Thunderstick provides, and having it automatically switch depending on the game is really slick. Kudos to GRS, Thunderstick ,and Stefan for providing instructions on how to do this easily.

Your experience with how well these work will depend on the quality of your Sanwa joystick. I had some LED Sanwa clones that I wasn't able to use because I couldn’t get the gates off easily, and I snapped one of arms when trying. I also had some EG Start sticks I bought from Amazon laying around and I could never get the 8-way to work well. I’d be missing diagonals really easily and no matter how I tried to fine tune the gates, I couldn’t get it to constantly actuate one or more of the diagonal movements on the controller.

I finally picked up legitimate Sanwa sticks and popped the Switchable 4-to-8-Way Restrictor on. Right off the bat, it all worked. I did have the right settings, but the EG Start sticks just weren't a good enough quality to work correctly. So the moral of the story is, if these aren’t working well for you, it could be the Sanwa clones you have in your arcade. After putting these on real Sanwa sticks, I was incredibly happy with the performance. All the 4-way games were so much nicer to play with and I wasn’t missing moves. Going from say Pac-Man to Street Fighter II, I had Launchbox set it to 8-way automatically, and I was able to pull off multiple uppercuts in a row with Ryu with ease. 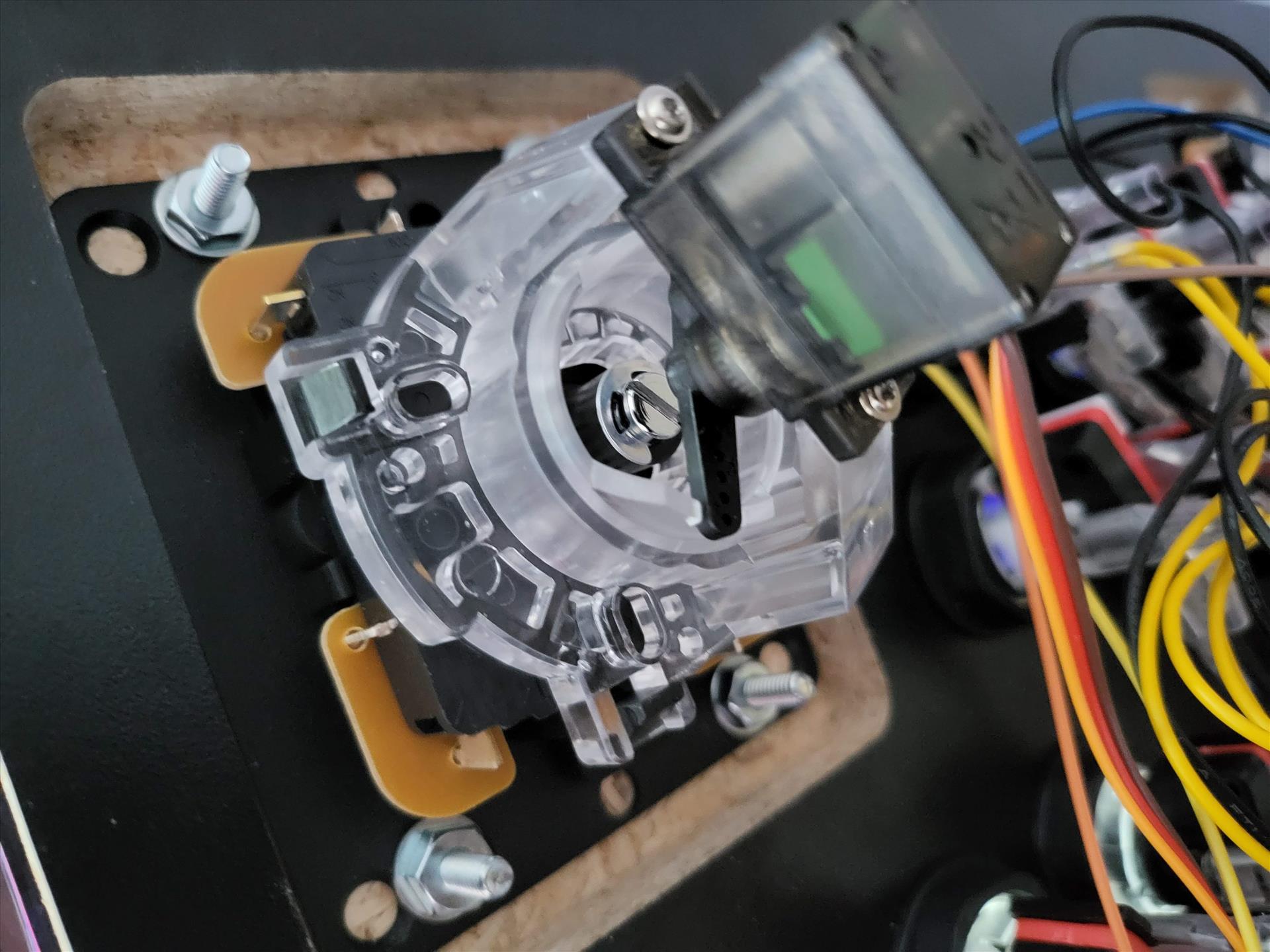 For those with other types of joysticks, there’s hope that GRS will be releasing different types of gates for the servos to work with. In this example, they show off a prototype of a gate that’s designed to work with their Tron style joystick. I would like to see a new Sanwa gate design that doesn’t extend as much as current ones, but it’s good to see the one for the Tron joystick have a lower profile.

The All-in-One kit is normally $35 but at the time of this article being published, they had a sale running for $30. The extension kit normally goes for $20, but at this time it is selling for $17. So for two players, you can grab a nice kit for $47 plus shipping. For around $50, you’ll be able to automatically control the Sanwa gate positions for better gaming experience based on the game being played. It’s a pretty simple yet effective solution so long as you have the room in your control panel to do so.

If you have the room and don't want to buy new sticks, the TOS GRS Switchable 4-to-8-Way Restrictor is a great product to retro-fit your arcade sticks, allowing for easy switching between the two operations. Control manually or with the command line, it's a not too expensive to get your sticks to feel correct in old school games.