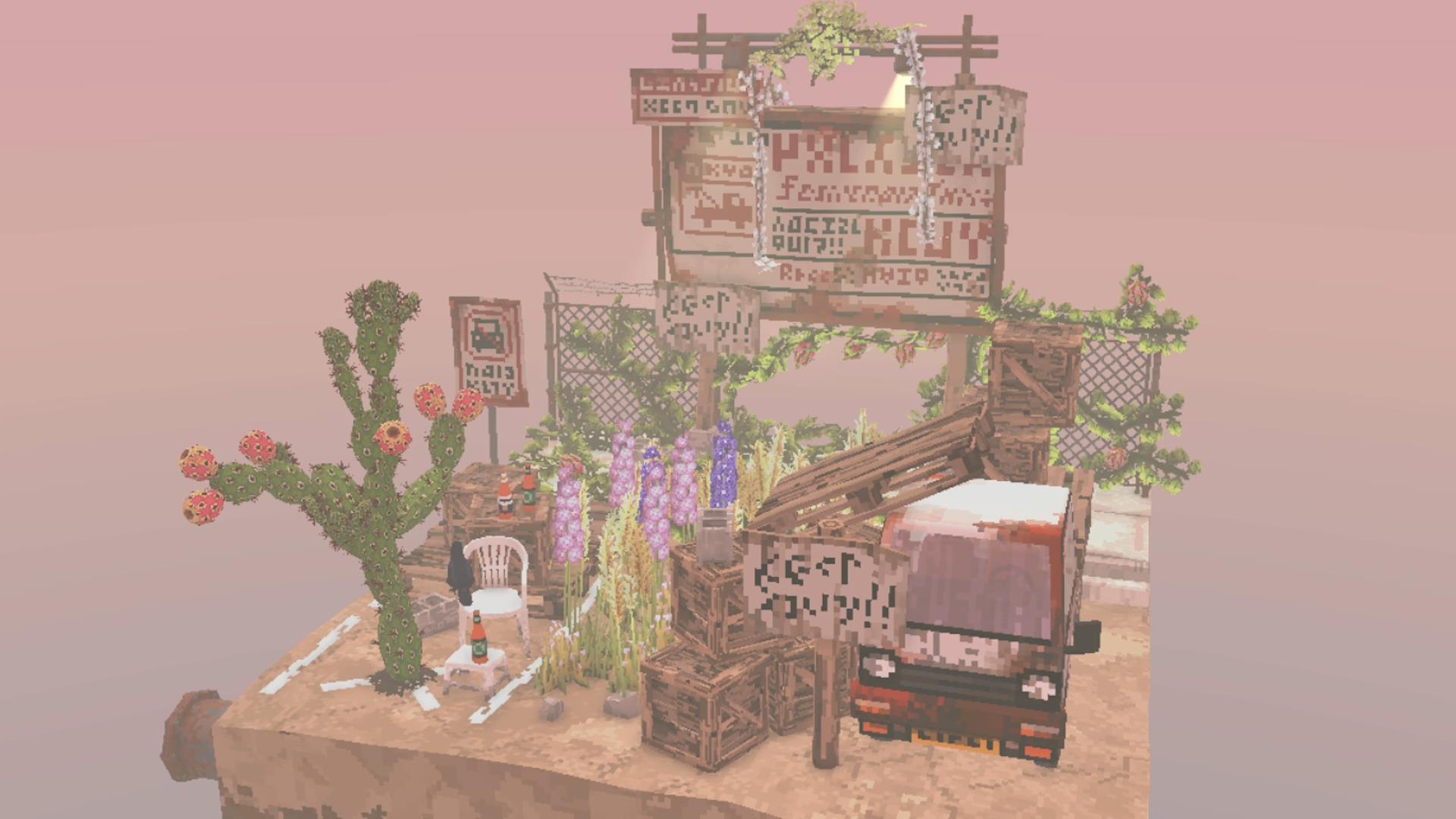 “Don’t tell me, show me.” You hear the refrain over and over again in game criticism. Don’t rely on tutorials when you can design things in such a way that a player can learn by doing. Avoid exposition when a story can be told environmentally. Don’t stop the action in the game to teach me which buttons to tap – just show me a simple HUD and let me figure it out. Yeah, that’s what people think they want.

But what if a game commits to these design rules so stringently that the game passes through some hazy barrier of comprehension and becomes obtuse? Can a game attempt to show (rather than tell) to such an extent that the player is left bewildered, no matter how simple the core mechanics are? I’m not certain, but I do believe that Cloud Gardens – as simple as the core gameplay loop is - comes close that mystical realm of unknowable gameplay. 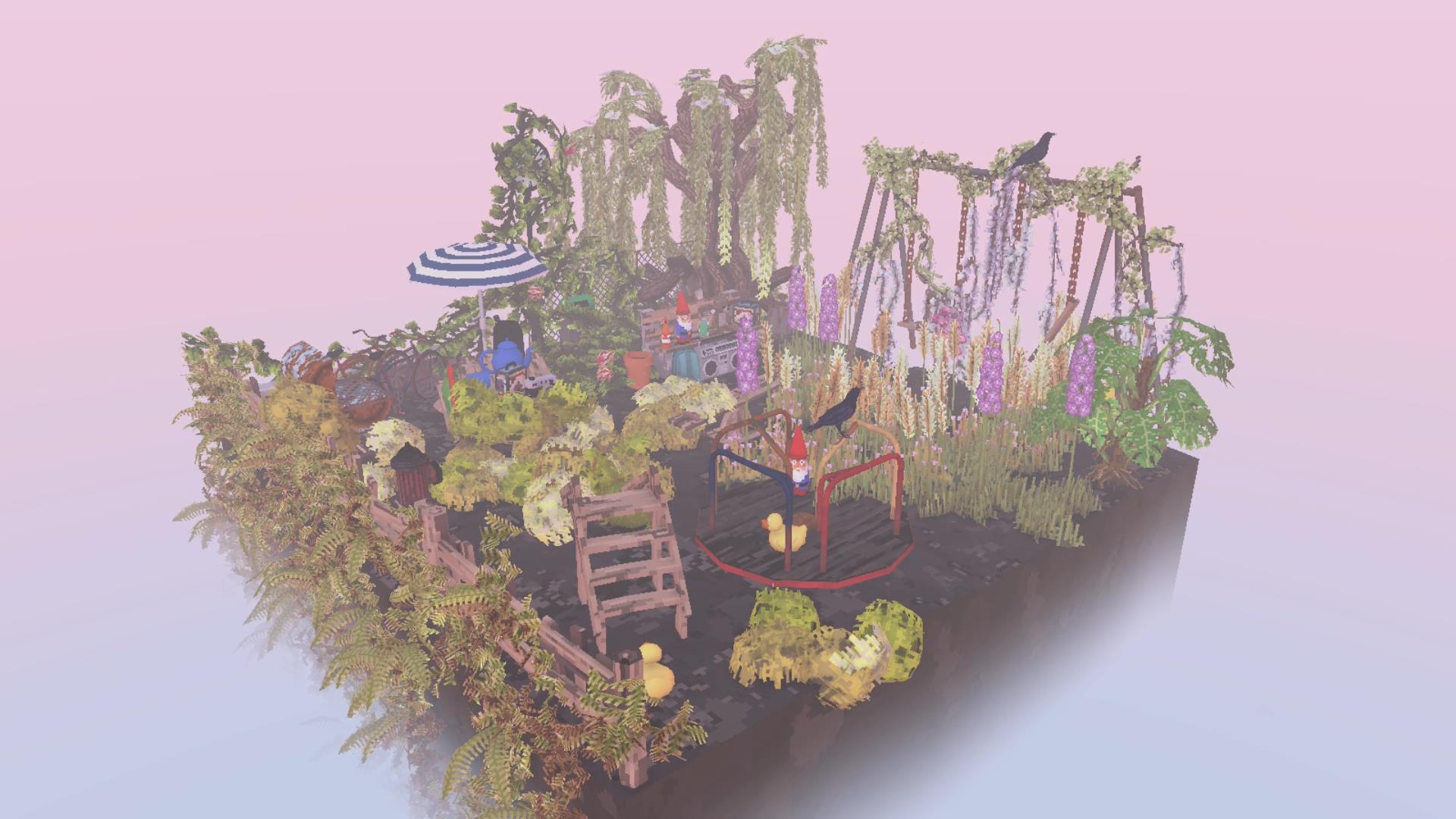 Cloud Gardens is one of those “chill experience” games, almost more of a toy than a game. I’m not the sort of player that needs a huge narrative thrust to push me forward through a game, so I was excited for Cloud Gardens. But as time went on and I got further into the game, I felt myself wondering more and more about just what I was supposed to be doing.

The core loop of Cloud Gardens is simple. Players start with a small pixel-art diorama depicting a tiny sliver of a post-apocalyptic world. Or maybe it’s just an abandoned city. Hell, it could just be the parking lot at an old factory. Either way, people used to preside here, and they clearly don’t anymore. The little slices of land in Cloud Gardens are occupied now only by birds. 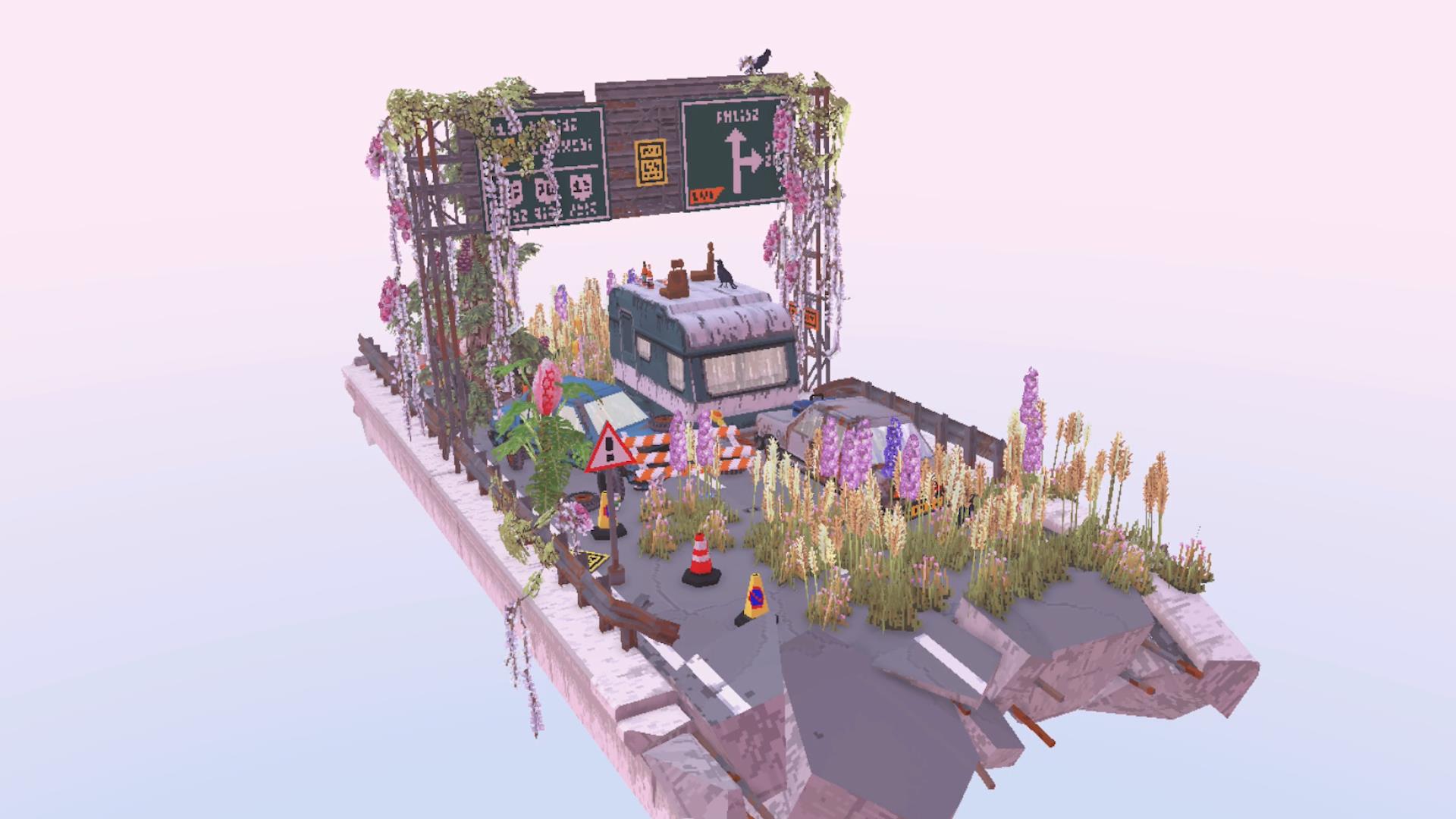 Street signs, abandoned vehicles, and highway overpasses seem to make up the primary motifs at work here. The dioramas are really quite cool, with a dreamy, hazy quality to them. It’s fun to rotate them around the first time you see them, taking in the little details.

Players have two primary ways to interact with the world; they can plant seeds, or they can lay down junk. The player starts with a couple of seed types at their disposal, though the game quickly provides more. Different seed types can be planted in different places; some can be plopped right into the dirt, whereas others thrive when draped from structures. The seeds sprout a little when planted, but the real way to get them to grow is to lay down trash near them. 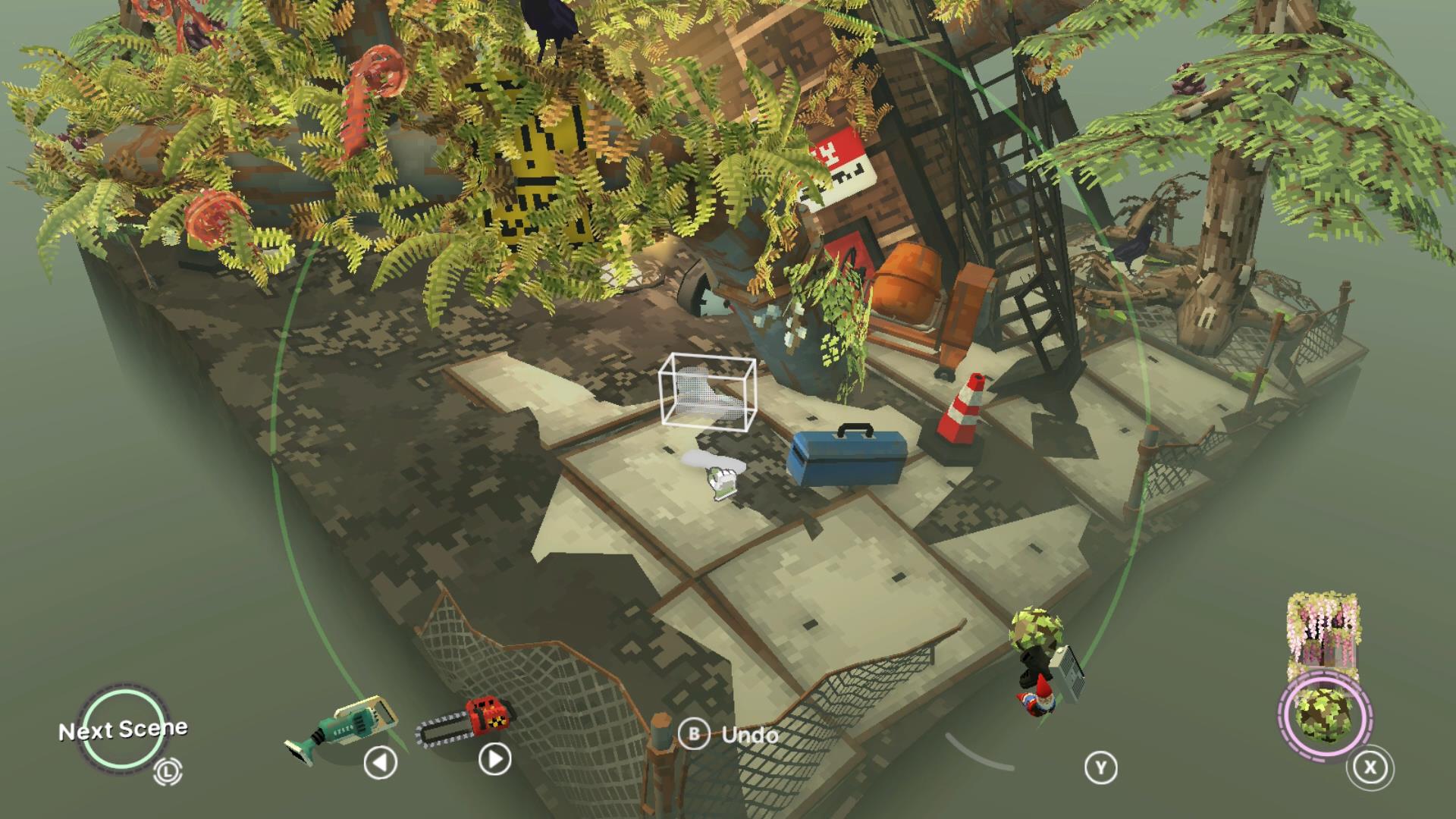 The game provides a jumble of garbage to the player, anything from suitcases and backpacks to street signs to rusted out cars, which can be selected item by item and dropped near (but not on) the plants, which causes them to flourish and bloom. Once they bloom, the player can collect the flowers to create more seeds. Plant those seeds, lay more trash, grow more plants, until the game decides that you are done and moves you on to the next diorama.

A little meter with a percentage in it tells you how close you are to completing your current project, though it all seems a little arbitrary. I watched the meter tick up and down between 89% and 92% yesterday afternoon while I sat and did nothing but move a suitcase two inches back and forth. A few other tools are provided – a vacuum allows you to suck up blooms when there are so many that you don’t want to click them one by one to harvest them, and an unusable chainsaw lets you hack back unwieldy growth, though I have no idea why you would ever want to do that. 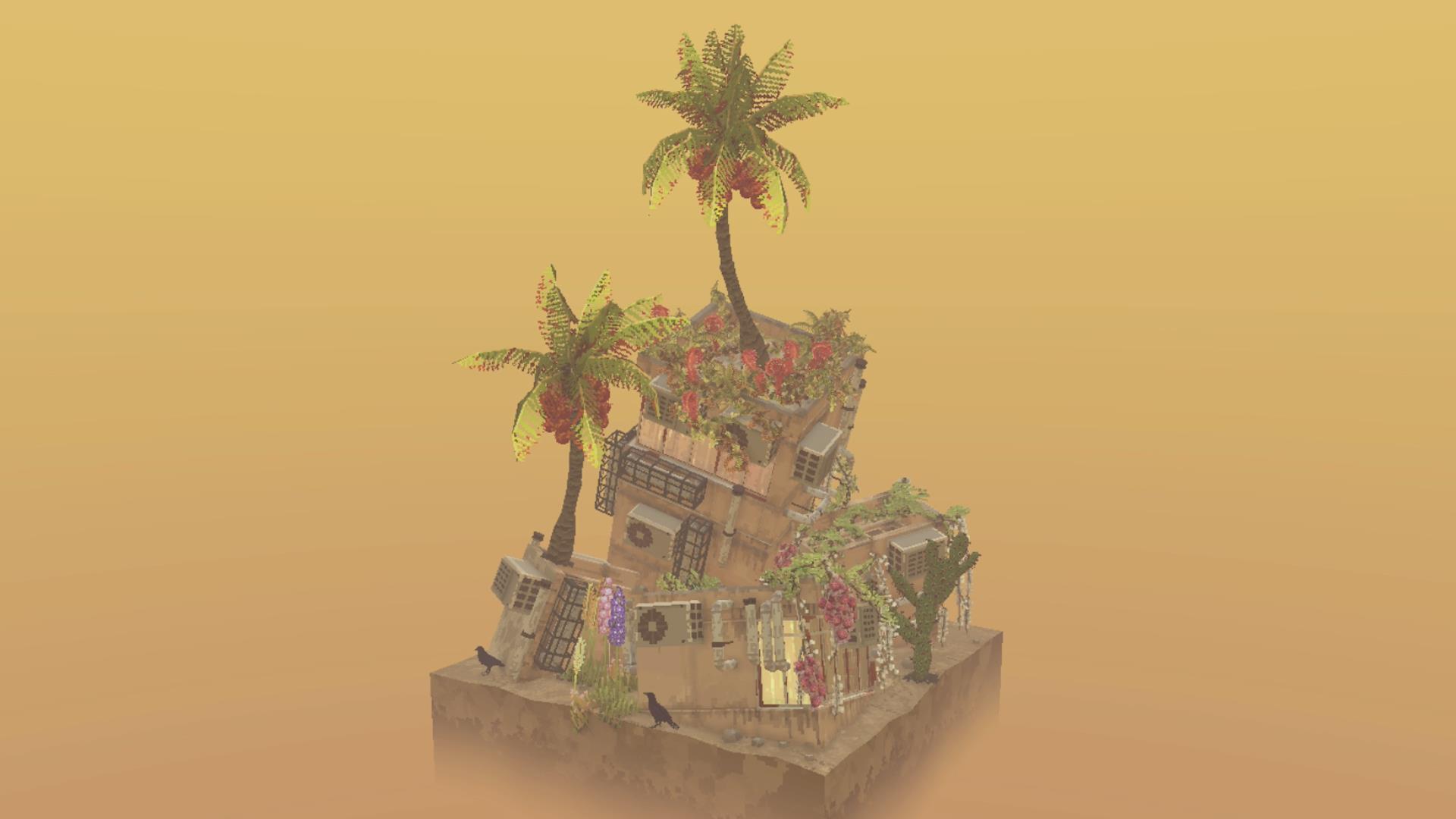 The chainsaw is a microcosm for another issue I had with Cloud Garden. Overall, the controls feel clunky and imprecise. You use the trigger buttons to zoom and shrink the scene, the R1 and L1 buttons to spin items, and the A button to place things. But I could never quite be sure where I was putting items. The reticle that appears on the ground seems to have a mind of its own, disappearing and reappearing depending on the stuff already laying around. Often, my items would just plop down and fall off the map, or worse, it would land on the very plants I was trying to grow and smash them to oblivion. I could never quite seem to find the right angle to see exactly what I wanted, or to precisely place my items.

As per my opening paragraphs, none of this is clearly stated to the player in Cloud Garden. You just pick up the controller and start messing around with the game. At first I found the lack of direction charming, and I enjoyed meticulously laying down street cones and grass, creating pleasant little scenes to complete the game’s goals. But before long, frustration set in. I found myself “chilling” less, and “angrily shifting the same backpack all over the place to try to get the last 2% to click on the meter” more. 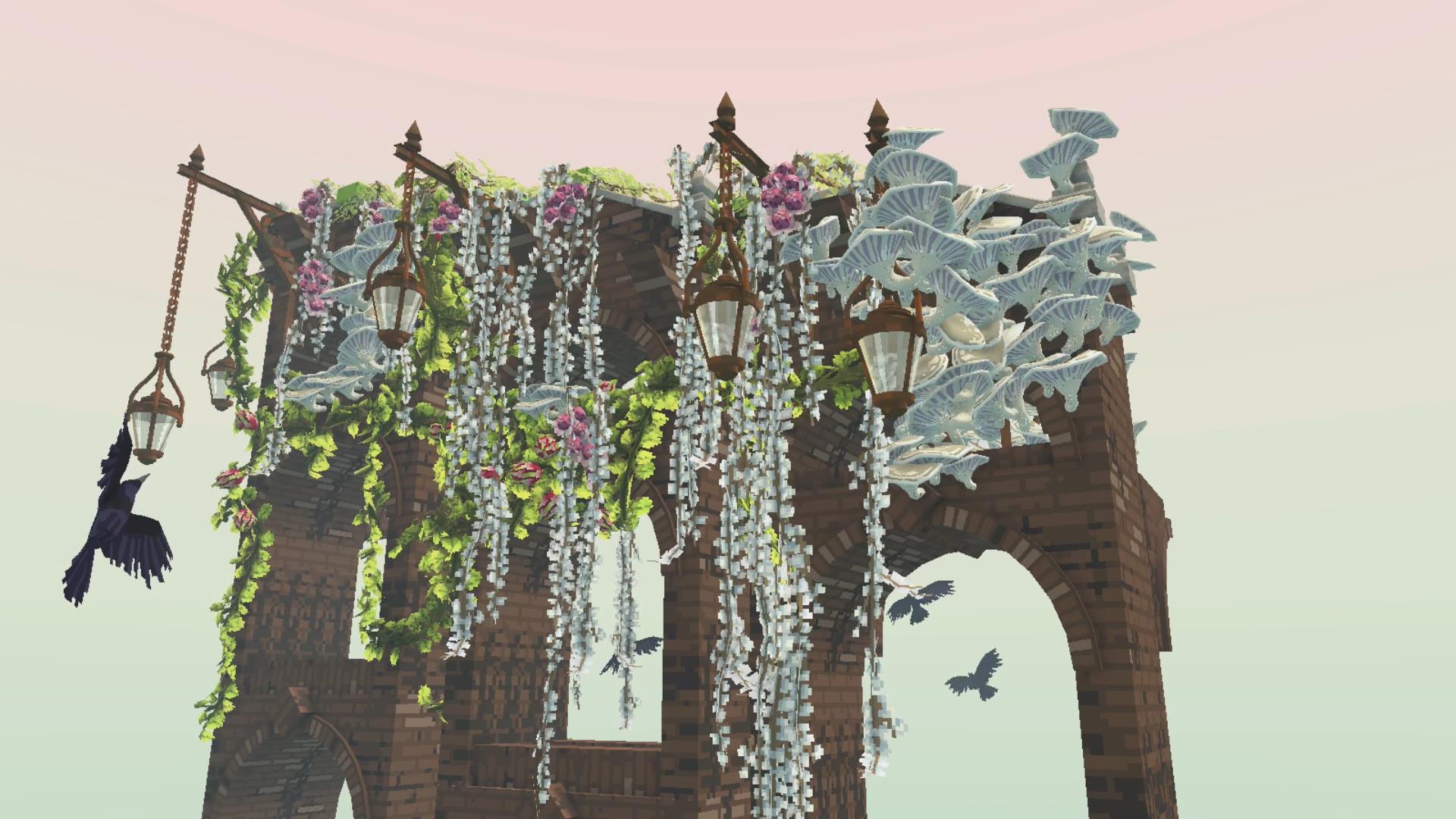 The problem is, since no parameters on completing levels are clearly stated, it is tough to know what to do sometimes. On occasion, the camera will pull out from a small diorama upon completion to show that it was actually a small piece of a larger scene, which never fails to make me moan a little. If I had known that the scene was actually larger, I would have thrown stuff around a little less haphazardly. On several occasions, I felt like I was just dropping tire after tire into the same junk pile, not creating any thing pretty or nice, but just making a crap heap to try to get my plants to grow a bit more.

As the player moves through the campaign, more and more items are unlocked for use in “Creative Mode”. Creative Mode allows the player access to hundreds of items, with which they can create their own dioramas. This mode is actually pretty creative and cool, and I can see certain players with an artistic bent fiddling around for hours, making their own little The Last of Us cityscapes. But the above-mentioned control issues do hinder this mode, making it a little too fiddley for me to enjoy. 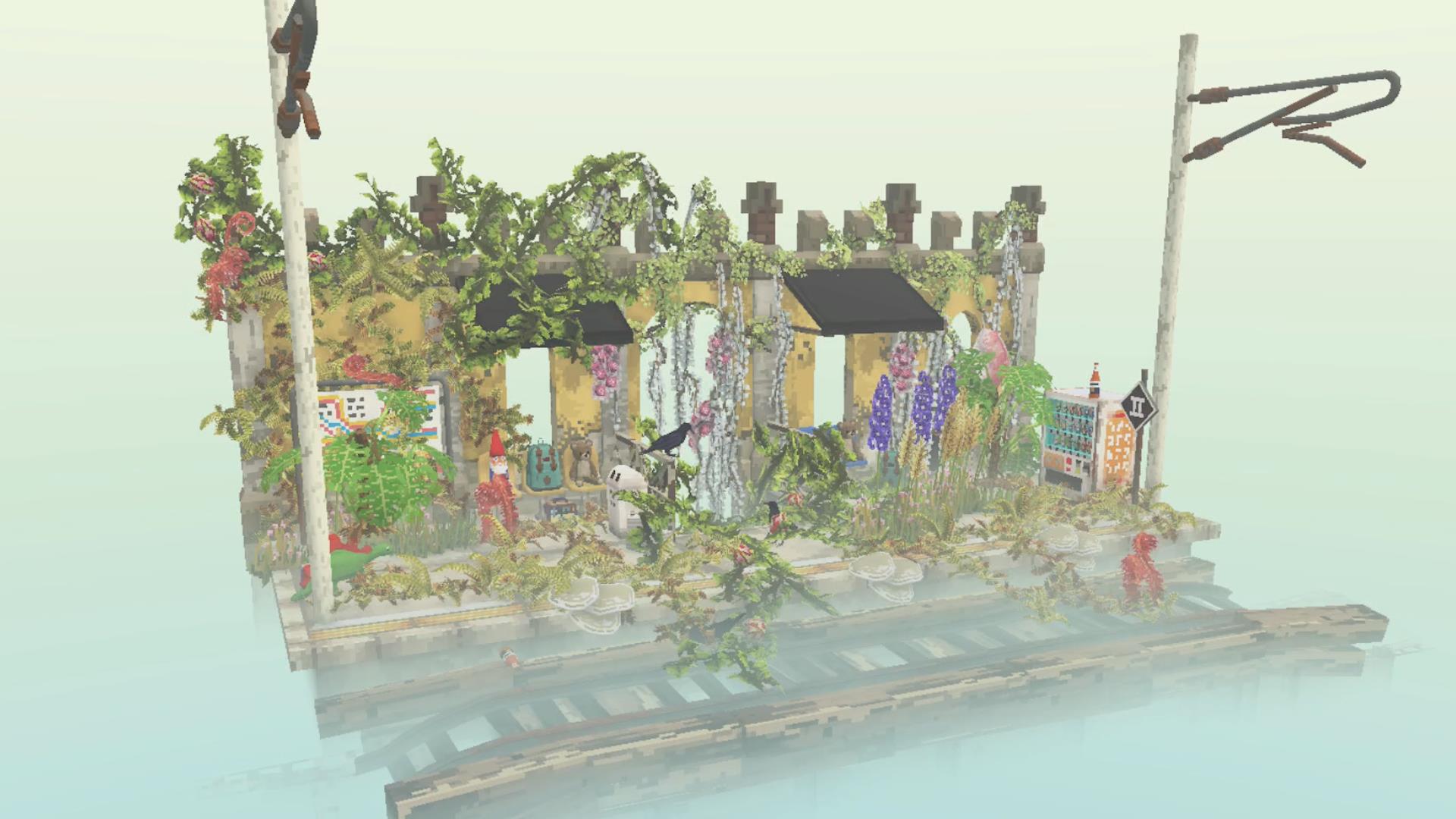 There is something going on here thematically that I feel a lot of people will appreciate. Something about the interaction between man and nature, and which side will eventually win the push and pull of that not-so-eternal battle. But much like I was unable to precisely place my street cones and baggage, Cloud Gardens doesn’t quite stick the landing.

While I can’t fault Cloud Gardens for its cool visuals or interesting themes, those things are ultimately lost to fiddley controls and a somewhat obtuse gameplay loop. Many players will likely enjoy the creative side of this game, but others will be left wondering why they are trashing up perfectly nice scenes.