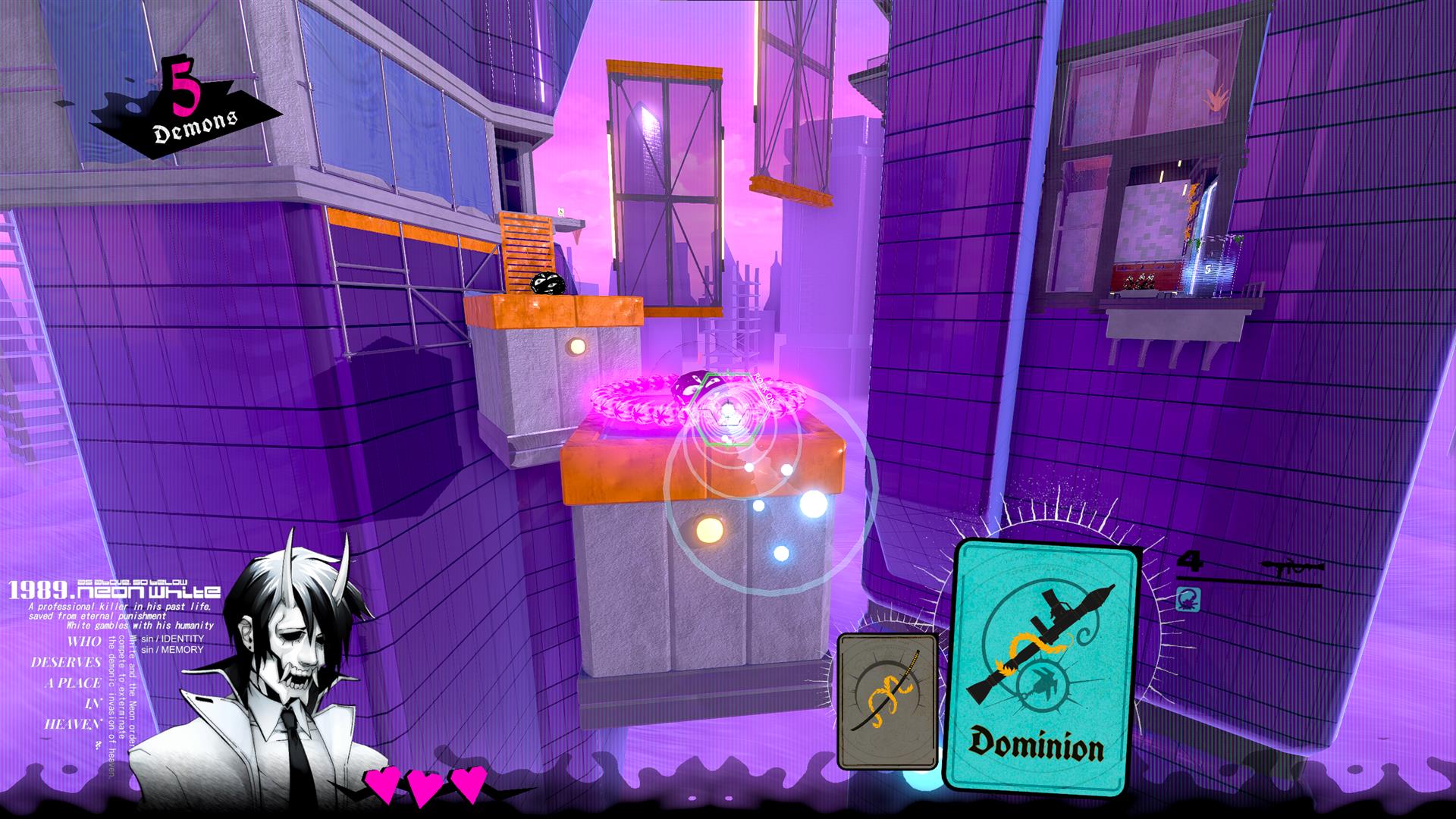 Written by Elliot Hilderbrand on 6/15/2022 for SWI
More On: Neon White

In Neon White you play as the titular character, who has died under mysterious circumstances, and has been brought back and thrown into a demon hunting competition. If after 10 days you’ve hunted down more demons than anyone else in the competition, you win a chance to stay in Heaven for the next year. Standing in your way is an eccentric cast of characters who also want to win. A best friend who may or may not have backstabbed you in life. There’s also the sister-like friend, the mysterious previous lover, and the silent, muscular antagonist. 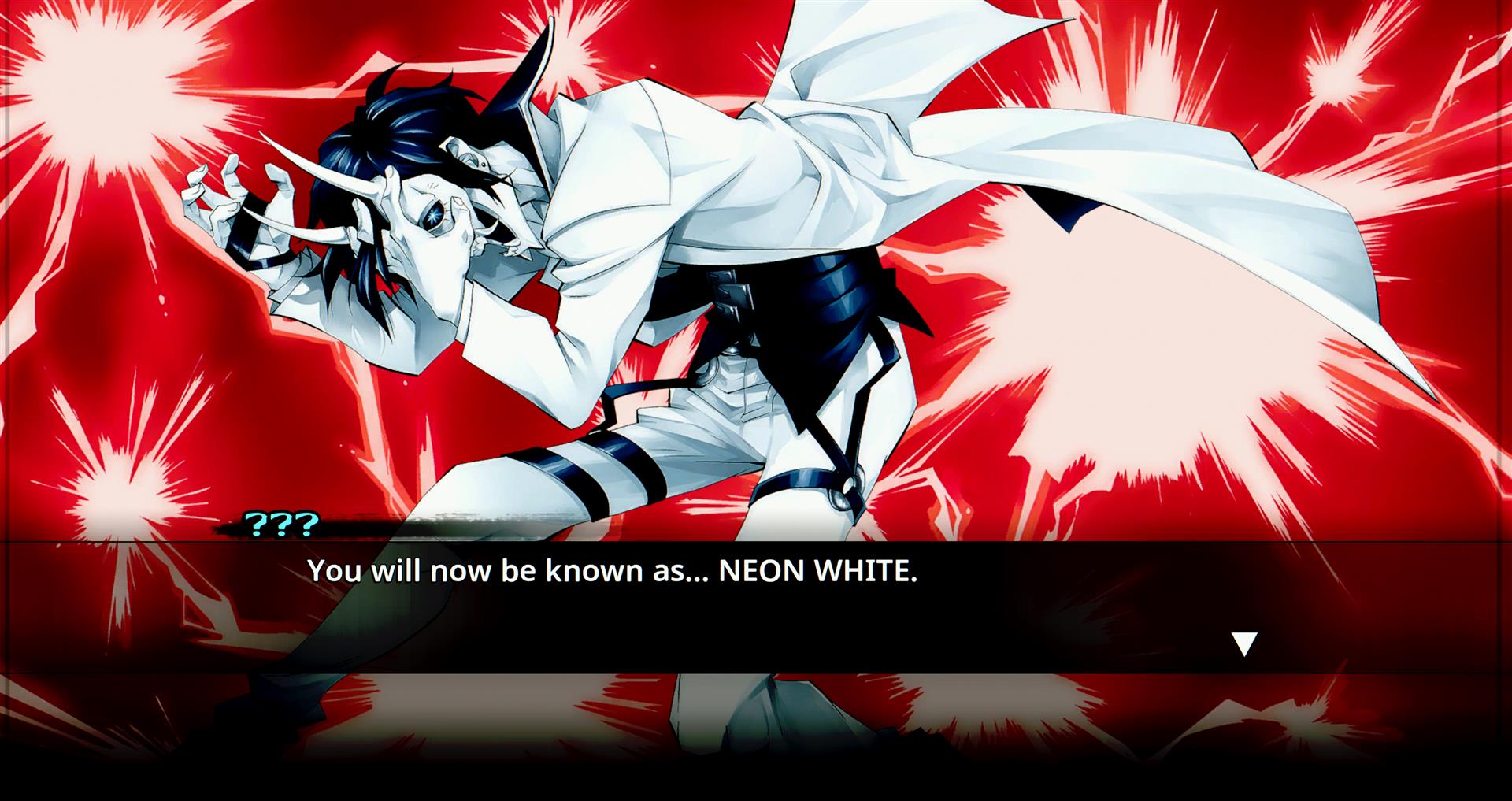 Neon White plays out over a 10 day period. Each day brings a new set of stages to clear. In order to advance to the next mission on the following day, you need to clear enough stages on either ace or gold to have a low enough score to unlock the next day. If your score isn’t low enough you’ll need to replay stages until your score clears the bar. Every now and then during your daily set of missions, you’ll get a cutaway scene with one of the side characters. Some character development is shown, but overall that part of Neon White feels hollow.

The visual novel part of Neon White feels a bit tagged on. Each person's story is interesting enough, but overall the narrative doesn’t do much to move the needle for me. In order to achieve any real advancement with the characters you need to find gifts that are hidden throughout the stages. Each stage has one, and requires replaying said stage to get to, requiring a little bit of thought. Once you have a gift you can then give it to one of the several other Neons, which will unlock a small dialogue with them. I focused on Neon Red, her relationship with White seemed the most interesting, but still predictable. 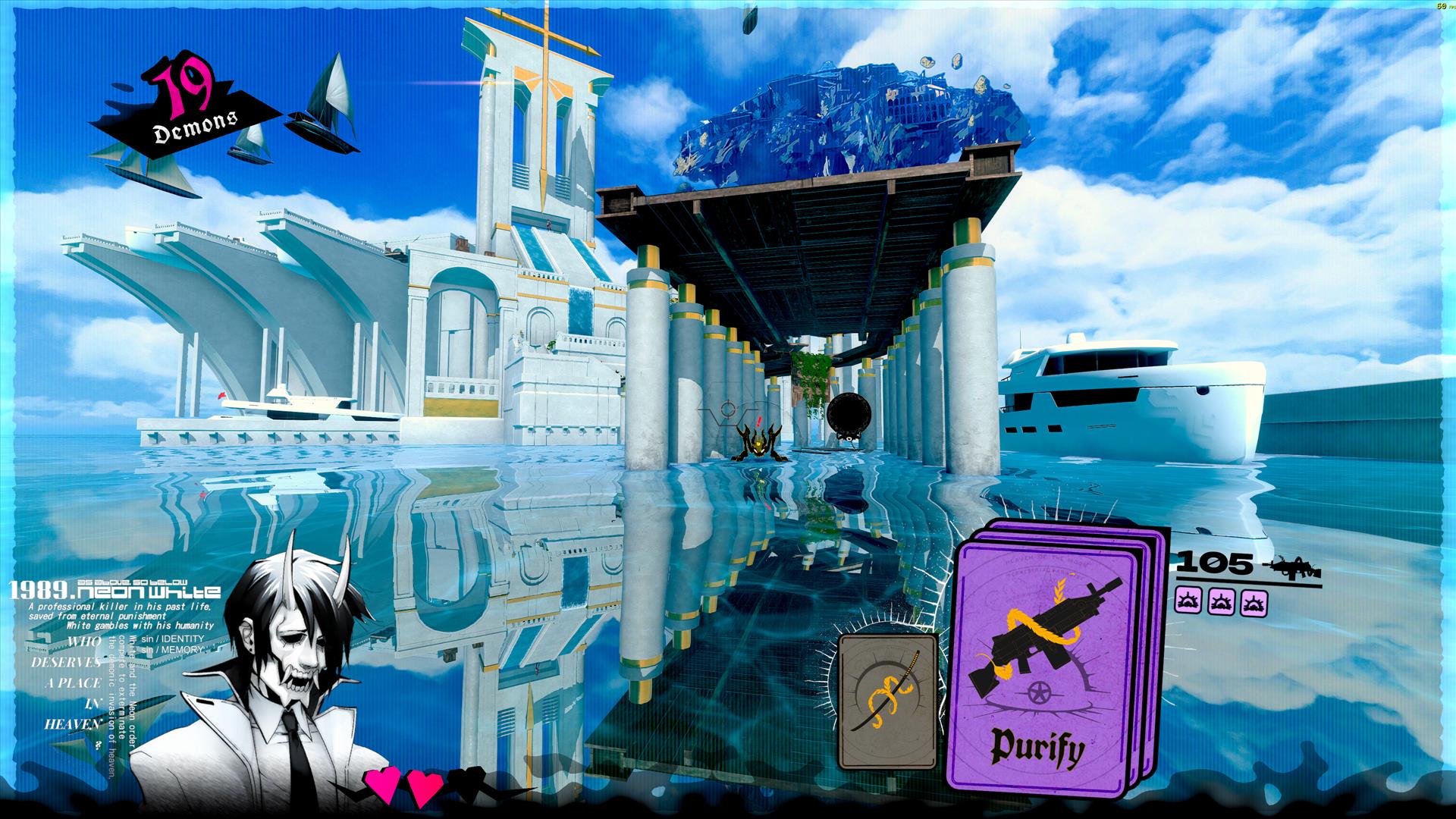 Like most FPS style games, understanding the moves in Neon White was simple. Clearing the stage under the time limit was not - especially since you need to clear out the demons in a certain amount of time to receive credit. Besides being a FPS there is also a heavy emphasis on platforming. Jump, slide, double jump, smash through gates, everything you expect in platforming. The last big gameplay aspect are the weapon cards. You pick them up as you run a stage. They function as weapons, handguns, bazookas, sub-machine guns. They also have a secondary function. Some weapons allow for a double jump, or to dash through a wall, punch through the floor to the next level. It becomes a balancing act; use your weapon as an actual weapon, or bust through that wall to make the run go faster, meaning you now have to use your melee weapon to take on the next demon. 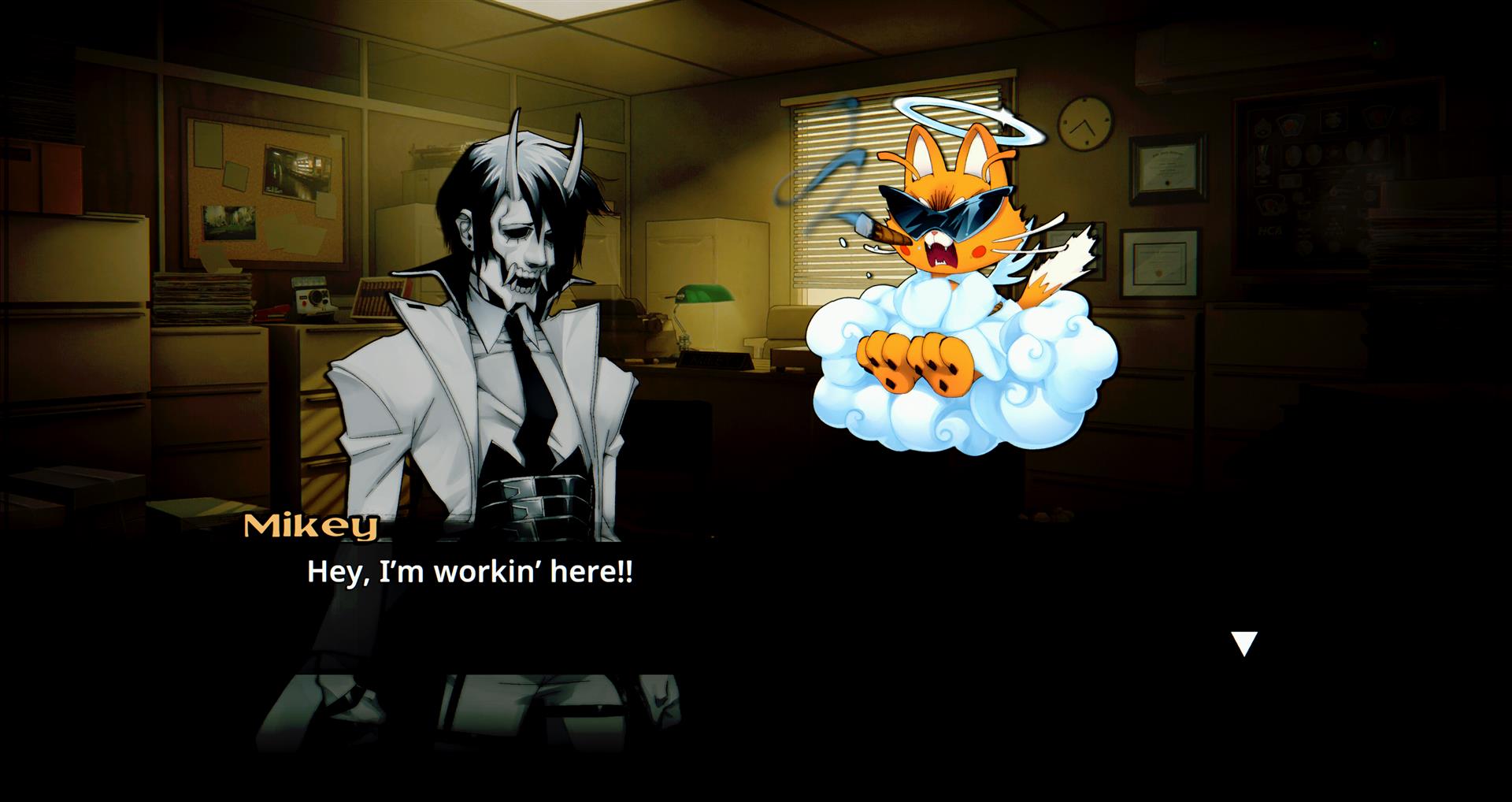 I’m not usually into speed run-style games, but Neon White is so welcoming from the beginning it was hard not to become hooked after a half hour. It wasn’t long before I felt hooked. Trying to ace the stage became an addiction. Getting gold on a stage felt like a tease, receiving a silver or bronze an insult. It also helps that the game is easy on the eyes. In the early stages Neon White starts out with blues and whites. Eventually, as you progress more and more colors get introduced. By the end the world in which you are playing in feels colorful.

Like I said, watching a run come together is rewarding. When I come close to acing a level I find myself replaying it until I do. Every time I did something wrong I was usually able to learn from it. When I had screwed up some moves I almost instantly knew what I had done. Luckily restarting stages was quick and easy. The load times never bothered me, being nearly instant at times. Neon White is fast, and it’s also frantic. But at the same time the game is controlled. I never felt like the stage was being cheap, it never felt impossible to beat under the time limit.

Levels don’t necessarily get harder, some get longer, or more challenging, or just flat out different. They can also range in time. Some can be done in as little as 10 seconds, a few can take a couple of minutes. But clearing the demons on a stage as quickly as possible is key. The faster you clear, the better the ranking you have. In order to lower your score you need to either get a gold or ace the stage. Anything else doesn’t do much for you. In order to unlock the next day's set of missions you need to beat a set score. On day one I did not meet the score, and had to go back and replay a few levels until my score was lowered.

Replay is the name of the game with Neon White. In order to unlock the hidden gift in each stage you need to complete the stage in a certain time. In order to get the lowest score you have to ace the stage, sometimes taking anywhere from a few tries, to being next to impossible. I was able to ace most of the stages if I kept at it long enough. I did have a handful that eluded me though. The ones I could never ace always felt like I was missing some key shortcut, or having poor aim, where I would be required to get a headshot to make it to the end goal in time. 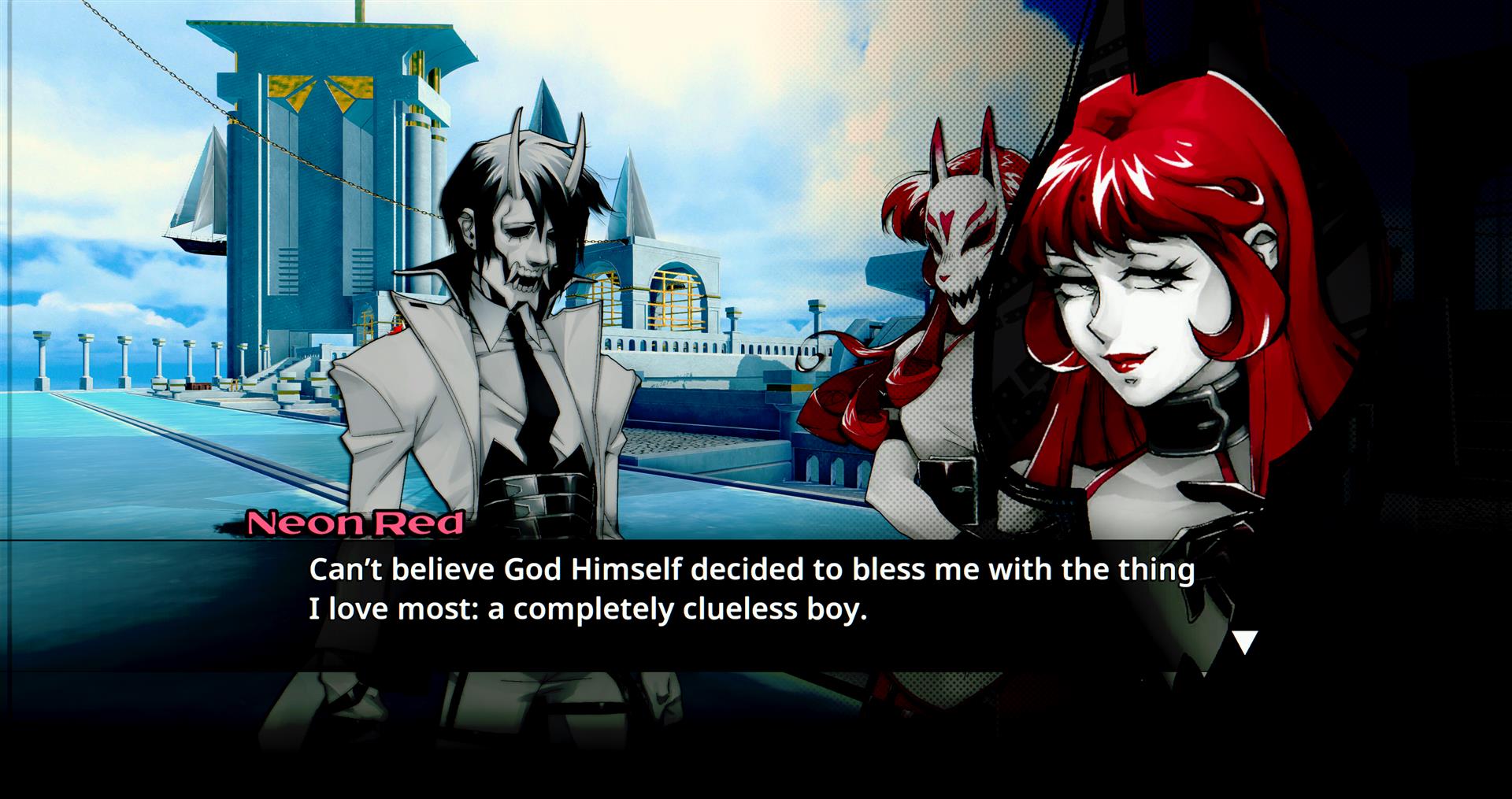 Weapons are cool, but the secondary move they can do is the more important aspect. Each weapon has a unique ability that allows you to discard the weapon to perform the special move. Specials could be as simple as giving you a double jump, or a quick dash towards whatever direction you are facing. They can become complex as well. A punch towards the ground that destroys everything near you, a bomb you have to place to not only take out a demon or two, but it also needs to send you up to the next floor to continue on the stage.

The visual novel part of Neon White never kept my attention for very long. But I am going to chalk that up to just not being heavily into the anime genre. I watched some growing up; as an adult, I’ll watch something here or there that I hear about. But overall it just isn’t a genre I pay a lot of attention to. The story of Neon White feels like it was made for people who are into the medium. The story is cheesy, and it makes no apologies for it. It also felt a little predictable. Oh no, you were best friends until one of you betrayed the other in some type of misunderstanding. 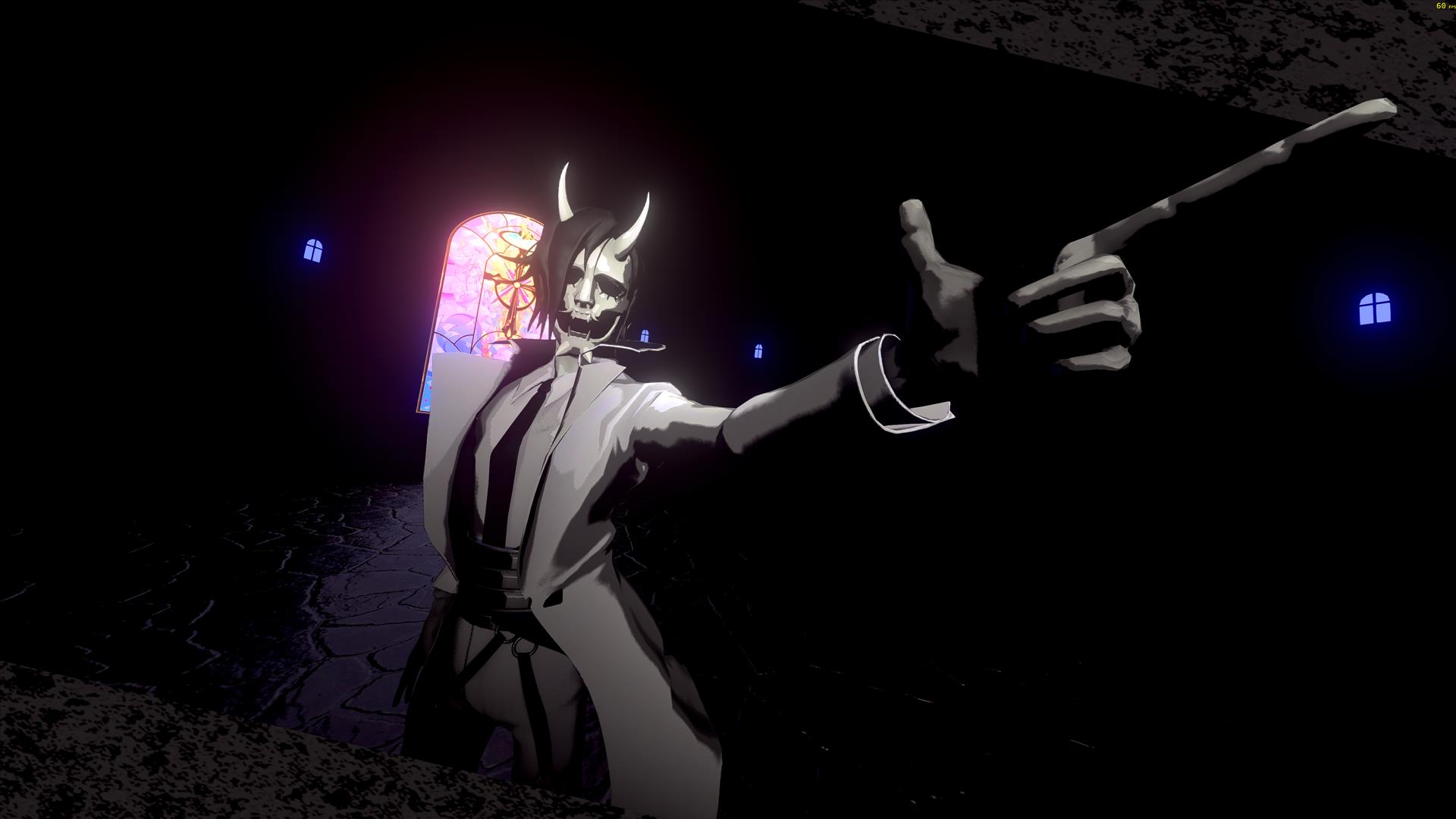 The biggest let down for me was the music. It’s a little too intense, never really meshing with the style of gameplay. Neon White is fast, intense, and methodical. The soundtrack is intense, and pretty fast, but feels completely forgettable. In a few cutscenes it matches, but when I’m on a stage it feels more like a distraction, never finding the right symmetry with the gameplay.

But that is a small quibble. Neon White has that one more run feel I find myself saying for 15 minutes before finally stopping. It’s wildly addicting to master a stage in under ten seconds. The gameplay is simple to understand, and the weapon cards slowly become more crazy and zany as the game progresses. Load times are excellent, and having to replay a level takes only a few seconds to load back up. I found myself playing for longer and longer periods of time every time I picked up Neon White.

Sitting down for even ten minutes with Neon White makes me feel like I’ve gotten a lot of playing time in. Stages are fast, and replaying them when things don’t go your way doesn’t feel like a drag. The addictive nature of Neon White meant I was going back to the same stages again and again until I was able to ace them. The story isn’t for me, and feels predictable, but I can see how it might hit the right crowd. The easy to learn gameplay, with the unique weapon cards made for an experience I couldn't get enough of.