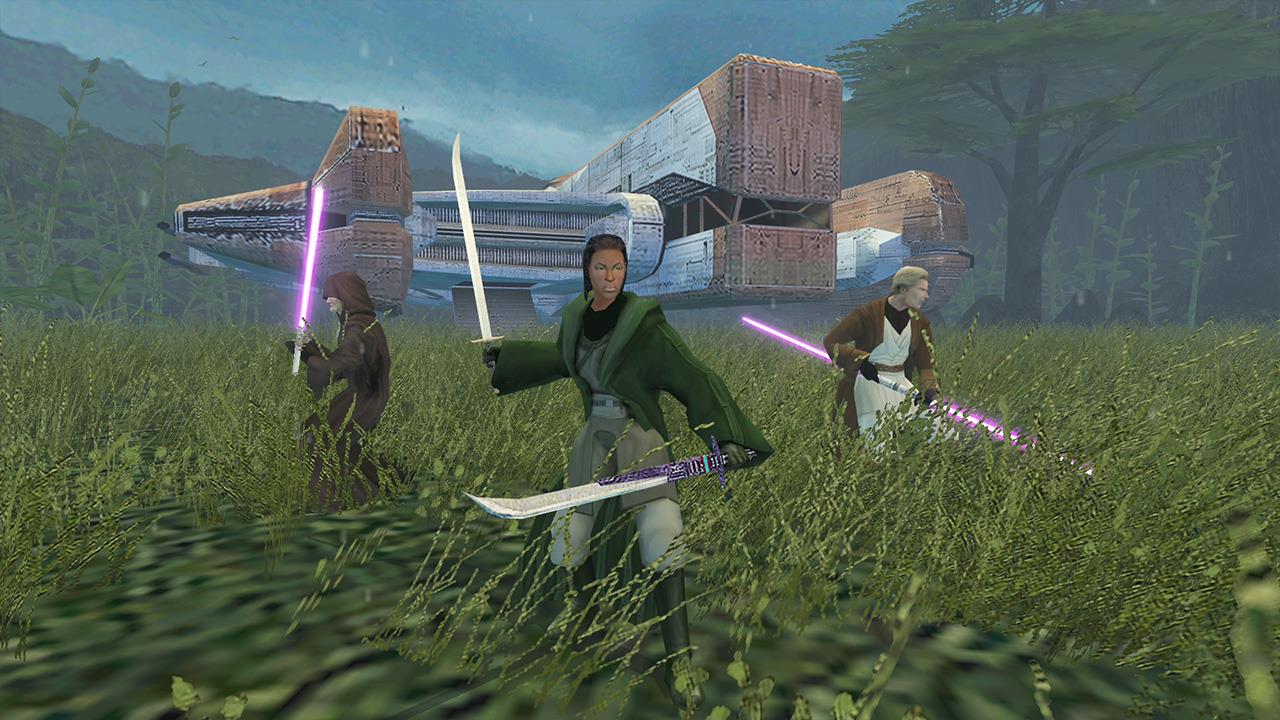 Written by Elliot Hilderbrand on 6/8/2022 for SWI
More On: Star Wars: Knights of the Old Republic II

Every four or five years I think to myself that we’re living in a Star Wars heyday. Whether it’s a new film trilogy, tv series, or video game, I love how Star Wars finds a way to stay relevant. When I think back to the last handful of years and the releases the franchise has gotten I realize we’re probably in the middle of one right now. And then when a publisher like Aspyr continues to bring older games back for newer consoles it becomes icing on the cake.

Aspyr has been in charge of bringing many of the older Star Wars classics to new consoles. So far they’ve brought Jedi Knight: Jedi Academy, Jedi Knight II: Jedi Outcast, Star Wars Republic Commando, Star Wars: Knights of the Old Republic, and Star Wars the Force Unleashed. And they’ve just done it again with Star Wars: Knights of the Old Republic II: the Sith Lords. I’ve been fortunate to get my hands on most of the titles, and so far I haven’t been let down with the quality of these older titles running on newer systems. 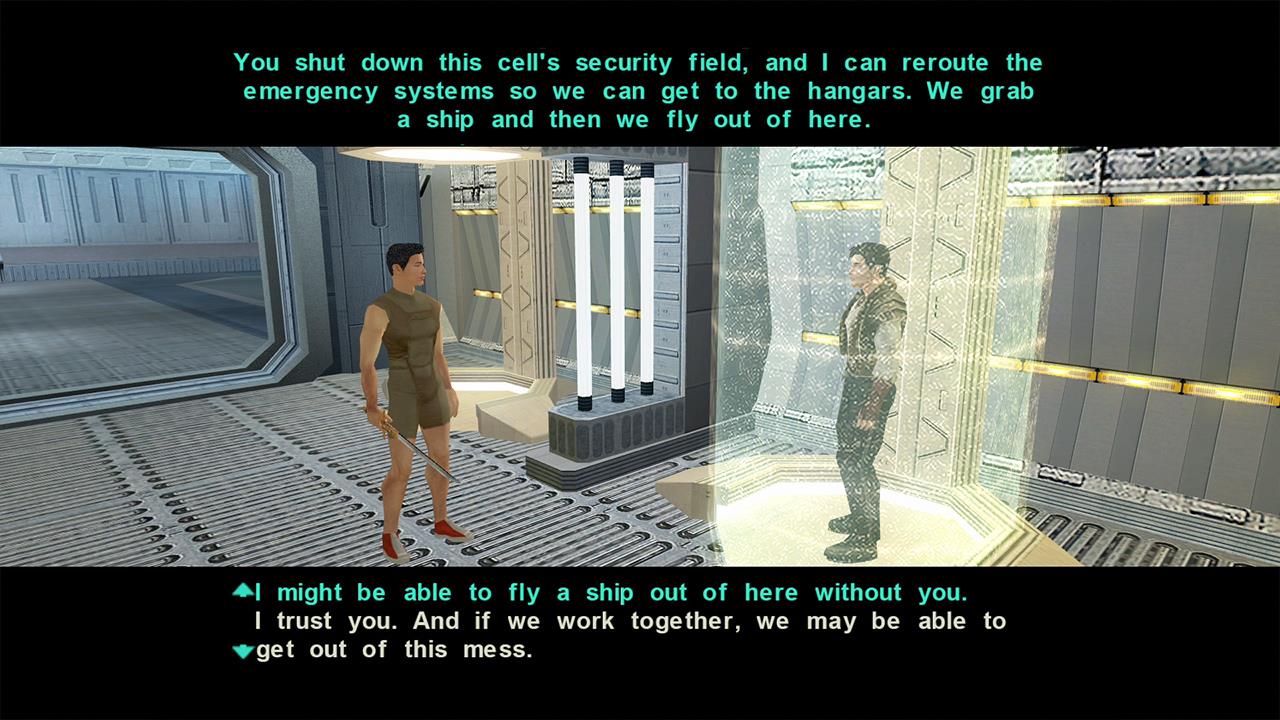 Star Wars: Knights of the Old Republic II: the Sith Lords takes me back to my college days. I was in high school when the sequel originally came out, but at the time it was one of those games I was always going to get to, but never did. It wasn’t until a few years later, as a freshman in college that I finally engaged. I was on spring break, and instead of going anywhere for that week my roommate and I hunkered down in our dorm room and played through KOTOR II.

I had rose colored glasses when it comes to Sith Lords. When it comes to playing an updated version of a game I enjoyed from years ago I’m always a bit hesitant to re-experience the game. Will the story hold up on a repeat playthrough? Will the gameplay feel outdated? Can I have as much fun as I did originally? I was surprised to find that I didn’t have an issue with any of those elements.

The only downside to the story of Sith Lords is how similar it is to the original Knights of the Old Republic. When the two games were originally released there was almost a year and a half between the two. More than enough time to forget enough of the plot that Sith Lords didn’t feel like a copy. You’re a Jedi, or you used to be, and for some mysterious reason you have lost your connection to the force. Now you need to go from planet to planet, and reconnect with the force, and those who have a connection to the force. Once you’re about three quarters of the way into the game you are hit with a crazy plot twist. Then you spend the rest of the game dealing with this new twist. That is not to say it’s a bad story, in fact, I believe the story to Sith Lords holds up a little better than its predecessor. 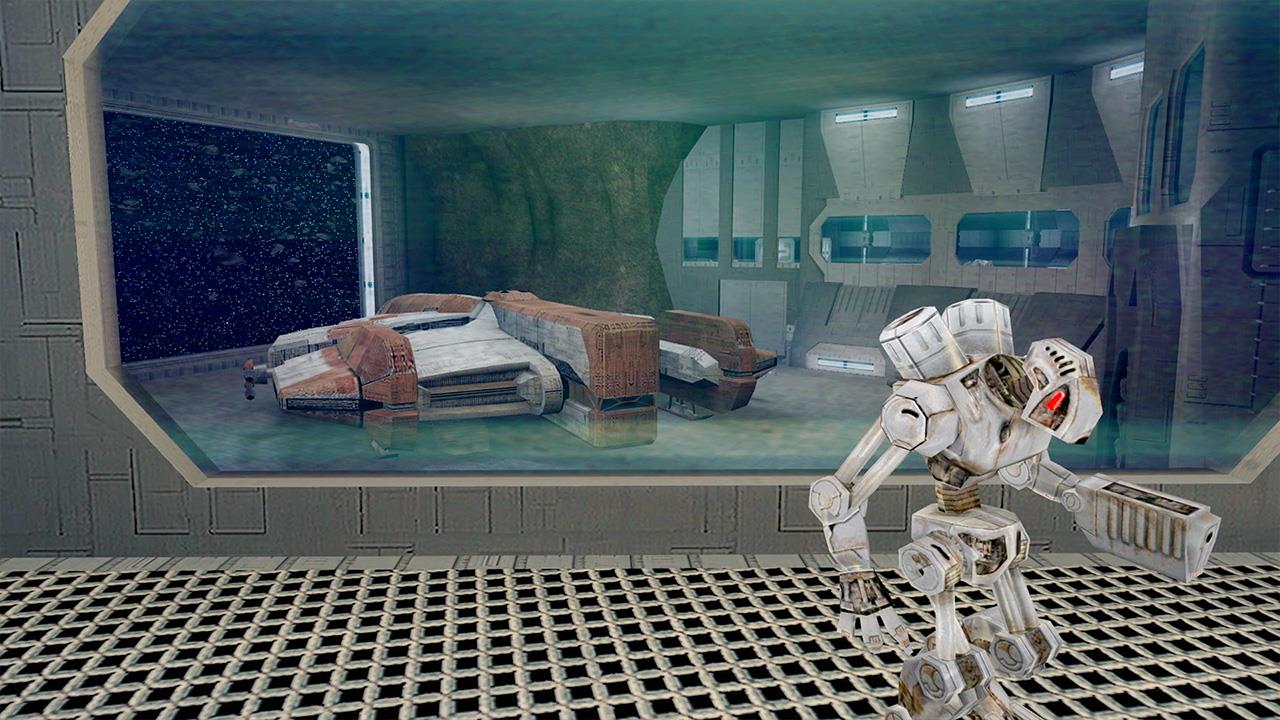 Where the first Knights of the Old Republic really showed that a video game could allow you to make choices that had in-game consequences, Sith Lords took that gameplay element to the next step. A great example is that you can choose to help free or call for aid from the Jedi you seek out. Or you can kill them. Conflicts in Sith Lords also change people throughout the game’s story. What you say, who you say it to, as well as who is around you when you say things matter. You choose which people to save, sometimes adding them to your team, and which to kill, never to be seen again.

I also love this cast of characters that surround your character in Star Wars: Knights of the Old Republic II: the Sith Lords. A couple of familiar faces from the first entry into the series either make an appearance or can possibly join your party, like everyone’s favorite hobo murder robot HK-47. New party members like Kreia, whose mysterious Jedi past was my favorite part of the story to unravel. It wasn’t just the characters that can join your party that I enjoyed. The villains, Darth Nihilus and Darth Sion are some of the best developed and coolest looking Sith in the entire Star Wars expanded universe. 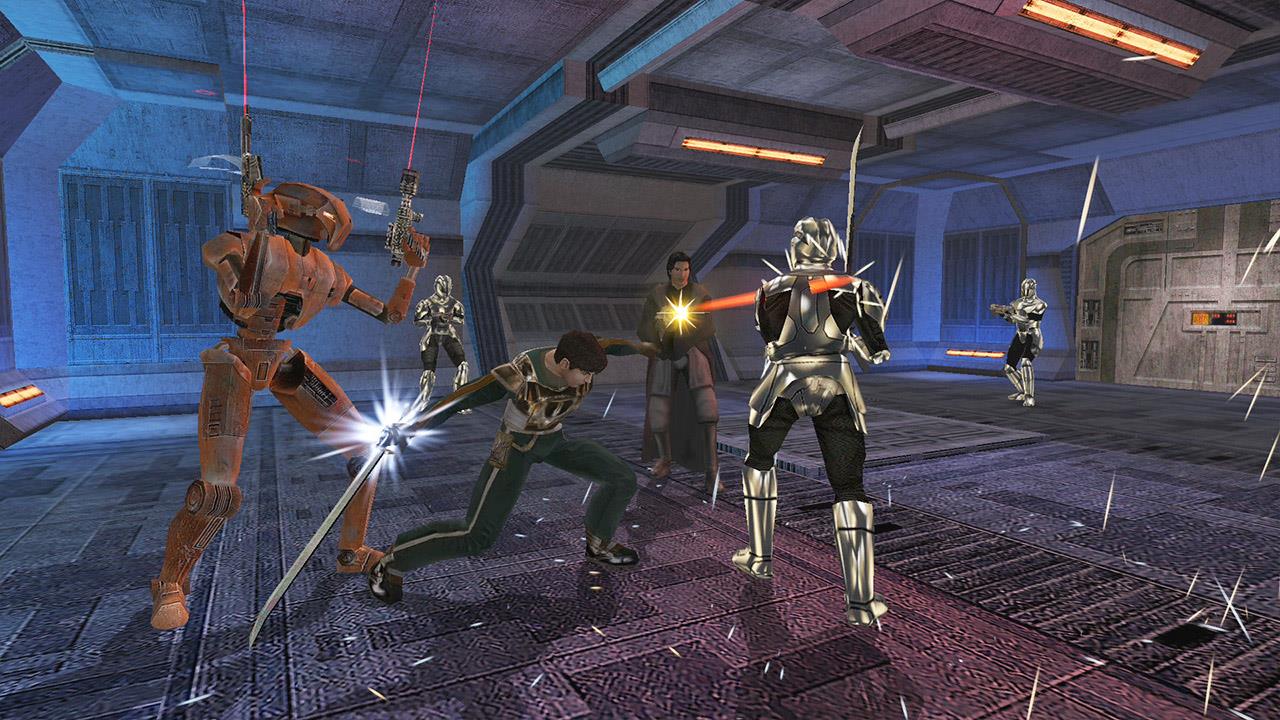 Along with the great characters comes the excellent locations of Sith Lords. Some planets like Korriban and Dantooine, which made appearances in the first title, are back for the sequel. They’ve been improved, or rather have grown some scars of war. The same is true for the Ebon Hawk, the ship you traveled around in during the original Knights of the Old Republic. There are also plenty of new planets to explore. Just like the original, each one feels different from the last; I never felt like I was about to explore a filler planet.

If, like me, you’ve played Star Wars: Knights of the Old Republic II: the Sith Lords before, there is still new content you may not have seen before. Aspyr has restored some previously created DLC that didn’t make the original cut of the game. That includes extra dialogue and a revamped ending. The only issue is that this will come out after the launch, so I have not experienced it to say how it plays out. But it gives me another reason to play again, which is something that I am interested in. There is plenty to see and experience in Sith Lords - my playthrough took more than 30 hours. There are elements I couldn’t the first time because of the choices I had to make. Choosing to play as the other side of the force would provide different cutscenes, and different paths. 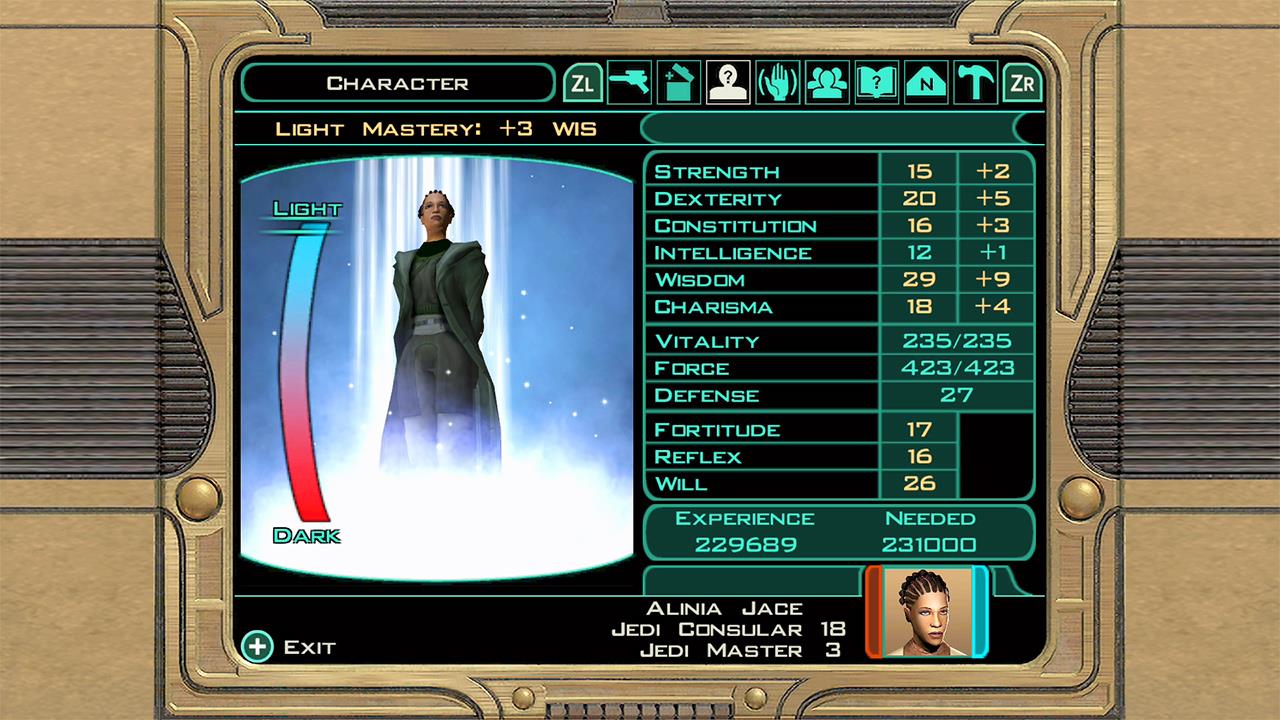 Not everything is sunshine and rainbows when it comes to Sith Lords. The UI feels a little clunky. Having to use the ZL and ZR bumpers and the L and R feels slow. Having to constantly go to the menu in order to equip a new shield because the one you have been using has run out gets annoying. The map feels small, and I find it hard to see where you are trying to go. Overall the menus just feel dusty, like something I would have used back in 2004, around the time Sith Lords was originally released.

There is not much holding Star Wars: Knights of the Old Republic II: the Sith Lords back. Some old school UI and menus was about all that took me out from having a good time. The twist in the story isn’t as drastic as that in the first title, while still feeling like a Star Wars story. Sith Lords does improve on the original in many ways. The choices you make mean more than they did in the original. Playing as someone on the light side of the force is harder to do. After all, doing the right thing isn’t always the easy thing to do. But going to the dark side is just as fun. Nothing like using some force lighting to take down a pile of enemies. Sith Lords took the genre in the right direction for RPGs in the genre. 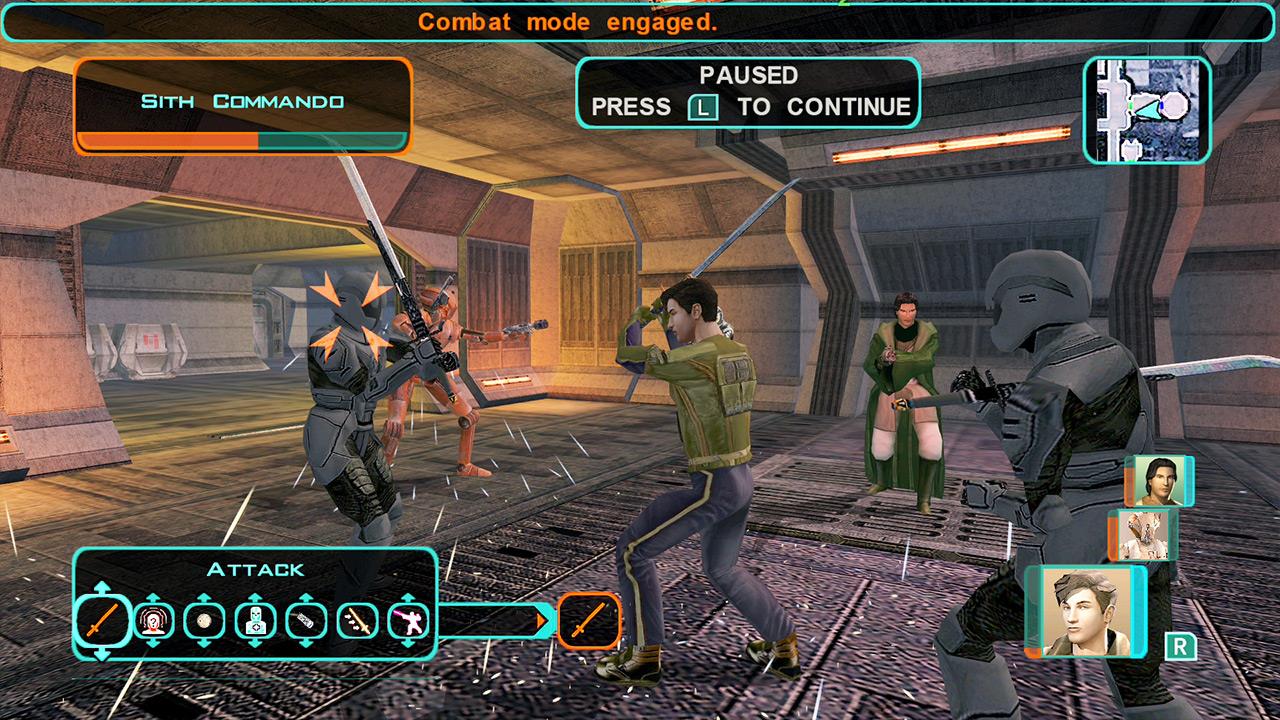 Star Wars: Knights of the Old Republic II: the Sith Lords expands upon the ground-breaking original. Story choices change depending on who you put into your party at the time. Conversations that take place between party NPCs can also get spicy, depending on who you bring along. Sith Lords does lean on some traditional Star Wars tropes a little harder than I would like, and the menus and UI are a bit dusty. Though I was afraid my rose colored glasses wouldn’t hold up, I fell in love with these unique characters once again.