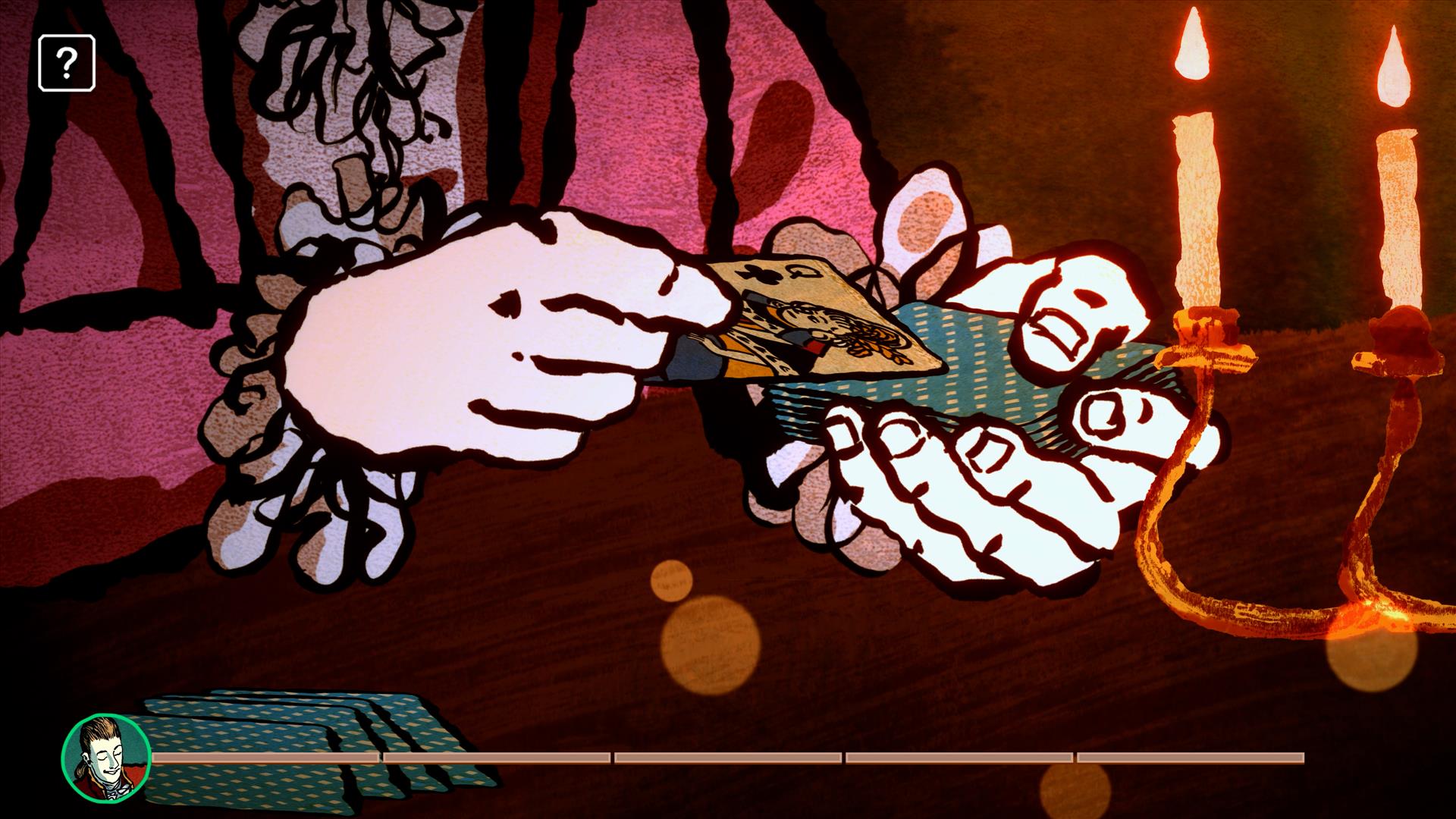 Written by Elliot Hilderbrand on 6/2/2022 for PC
More On: Card Shark

One day while working in a pub you serve a gentleman, Comte de Saint-Germain. He teaches you a card trick, one that the two of you will use that evening to swindle some unexpecting people out of their hard earned coin. Turns out the first schmuck you chose is the wrong schmuck to choose. When the schmuck notices you cheating him out of his money he draws a pistol. While arguing a tussle ensues around you, Saint-Germain, and the pub owner. The pub owner, who has been supporting you, is mistakenly shot by the schmuck. As the schmuck gets away, all Saint-Germain has to say about the matter is, “That’s unfortunate.” You’re a mute, so you don’t have much to say. It’s not meant to be funny, but I actually found myself laughing out loud during the first five minutes of Card Shark.

The two of you make your escape and you go on to join Saint-Germain’s caravan, pulling card tricks wherever you go. Saint-Germain, and by proxy you, is drawn into a political conspiracy and scandal called the "twelve bottles of milk". While that may sound exciting, it is a slow flop, the river is drawn out, and by the turn I didn’t really care. Card humor, who would have thought? While I enjoyed the story, it took longer to unfold than I wanted, as it never feels at the forefront of Card Shark. Instead, Card Shar was about learning as many new tricks as I could, and then implementing them at the next stop we made. 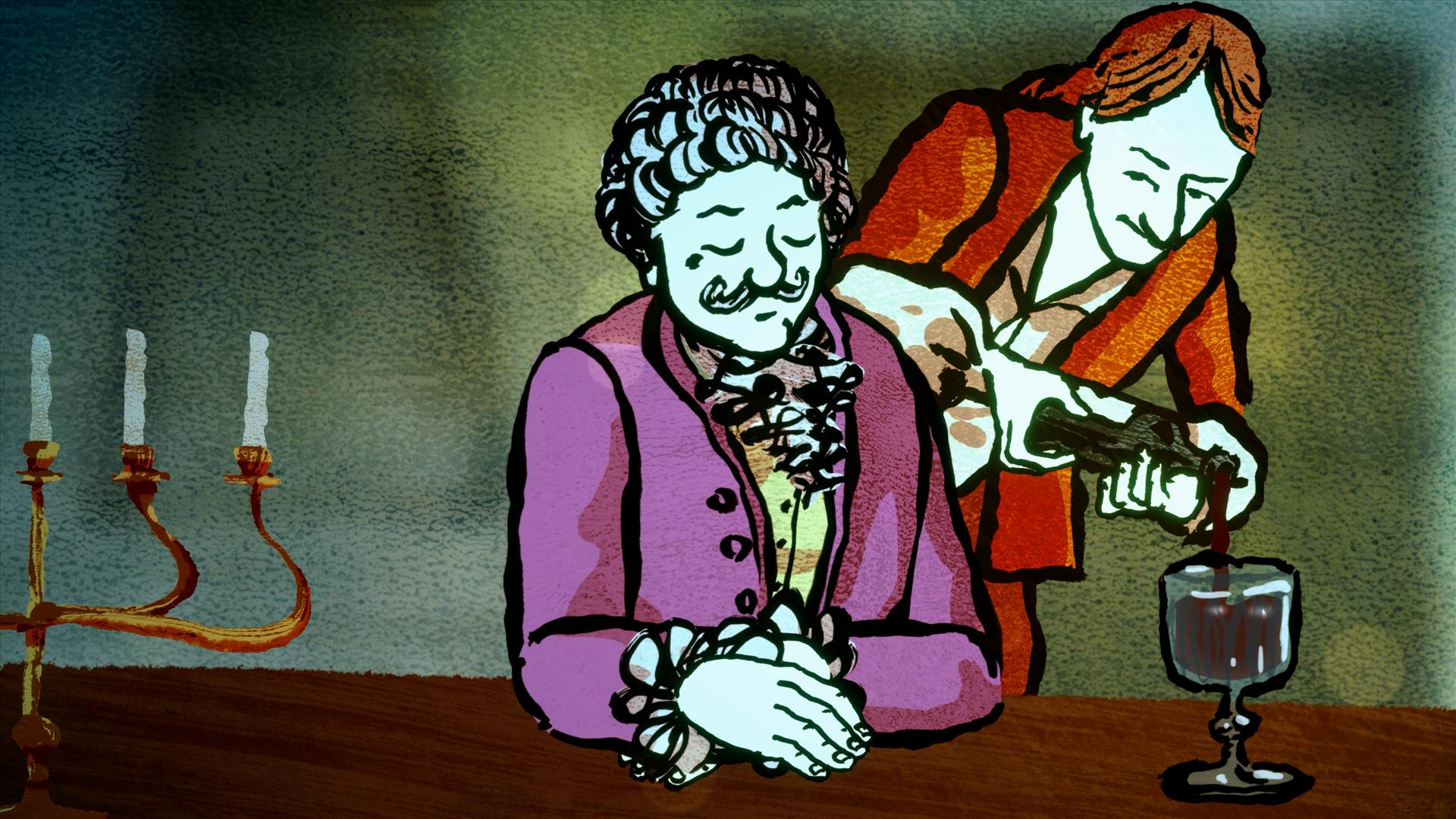 You never play any of the card games you’re trying to cheat at. Instead, while heading to your new location Saint-Germain teaches you a new trick that you’ll pull this time. There are 28 tricks to learn. Some, like three card monte, are unique. Others just build off from previously learned mechanics. The tricks themselves start off simple, and gain in complexity. It’s best to think of them as minigames. The more tricks you learn the more complex they get, and longer tricks take more time to complete. 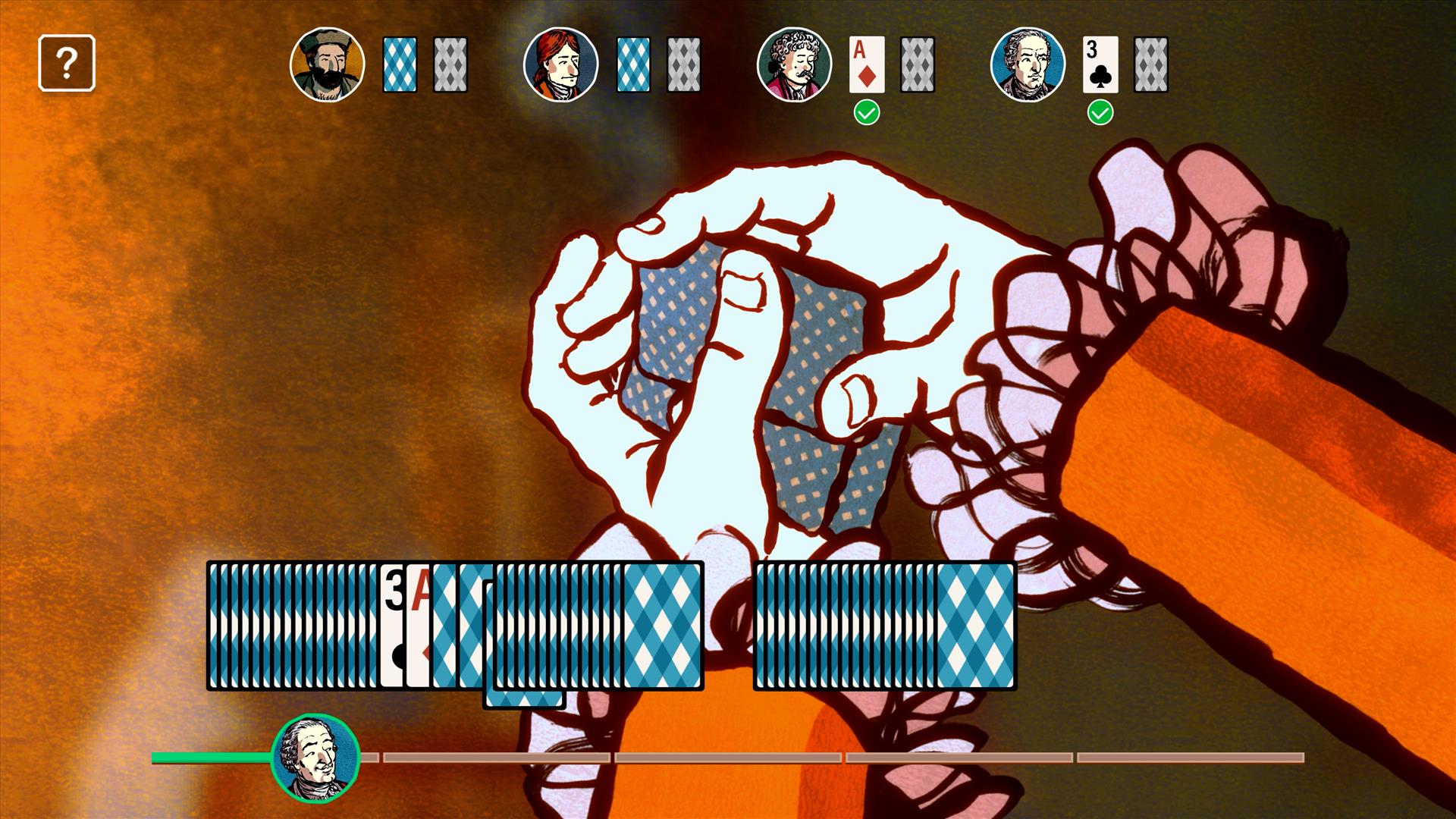 While performing the tricks a meter shows how likely it is that the person you are trying to dupe is on to you. The more complex the trick, the more time it takes, and the higher the likelihood of being caught. Getting caught can lead to jail time, or even worse, death. If you become un-alived, Death himself finds you amusing, and after a game of cards sends you back up to try again. If you play in the hardest difficulty though death is permanent.

There is always the possibility of jail or death, but the stakes never feel meaningful. At worst, I have to go back to a previously saved spot and start from there. Early on I was caught cheating, and sent to jail. The next scene was someone bailing me out of jail, only for me to return to the same café where I was arrested in the following scene. I performed the same trick, on the same guests, this time successfully, and moved on to the next scene. Zero repercussions. The illusion of the game world being a real world was broken pretty easily. 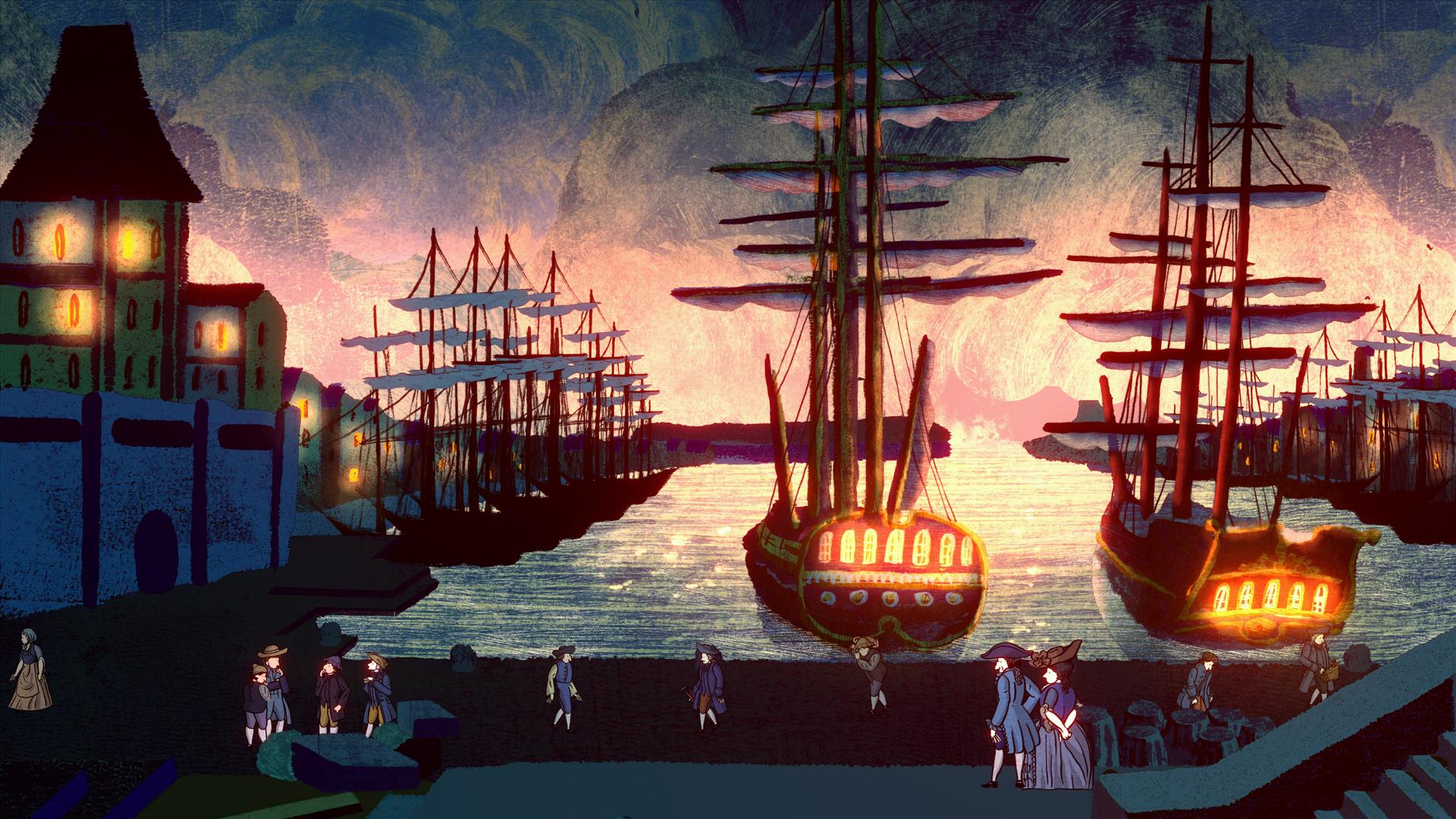 I find that the world of Card Shark is a world full of morons. If it takes me anywhere from twenty to forty seconds to stack a deck of cards, and it goes unnoticed, ya’ll in trouble. That’s not even the worst part. A handful of the tricks require my character to stand up from the table, fill someone’s cup with wine, then walk to the back to grab another bottle, where I stack a second deck of cards. I then come back to the table, and then swap out the real deck for the one I just stacked. I go on to repeat the process several times in one scene alone. All unnoticed. Perhaps everyone in the 18th century was just stupid. They were wearing powdered wigs after all. 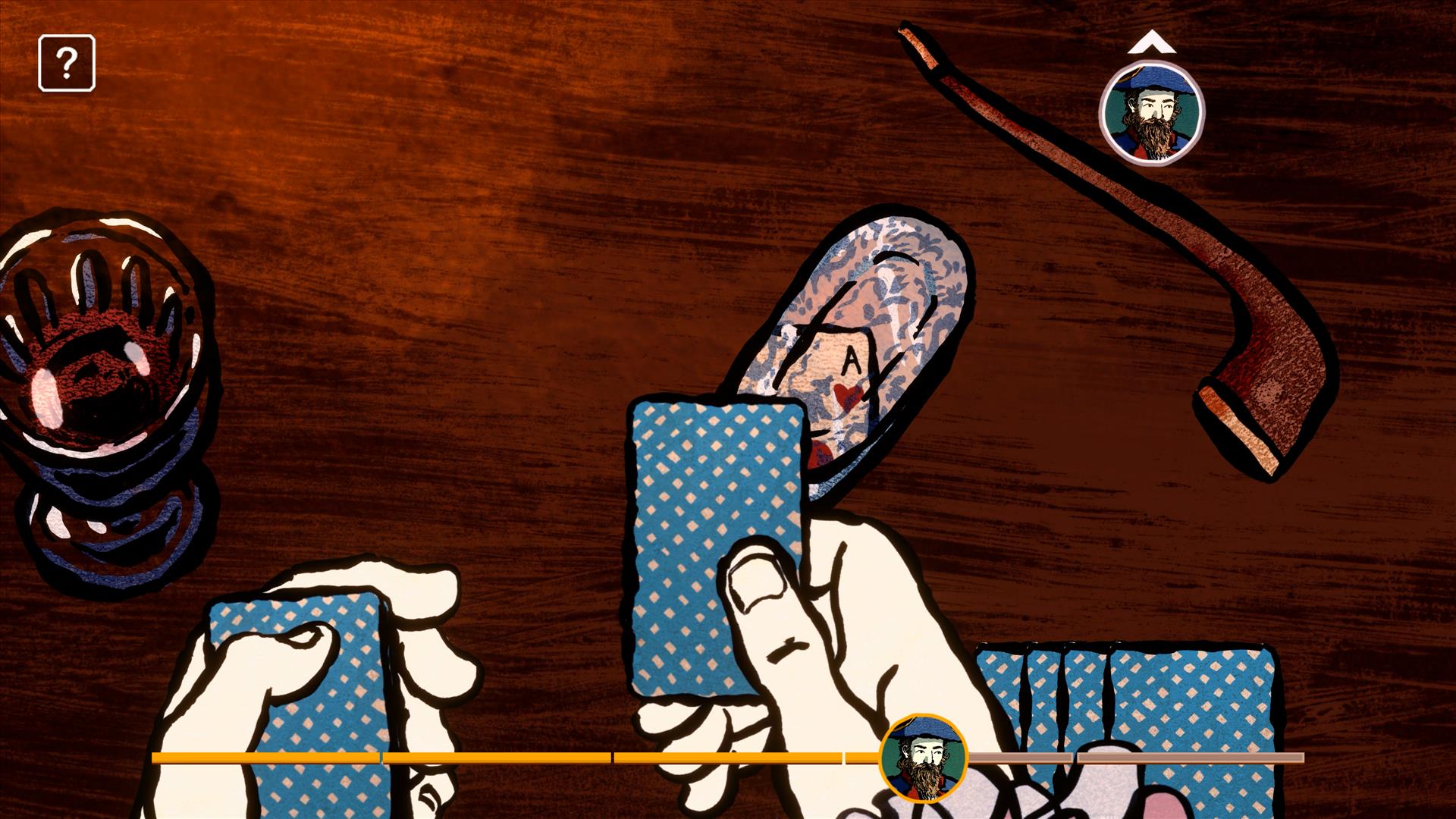 Card Shark is set up for someone who has a weekend free and wants to play through something and be done with it after. I say that mostly because I took last weekend to play and felt that it was the best way to play through the game. With 28 tricks to learn if you break for too long you’ll probably forget most of them. I actually kept a notepad right beside me when I was learning a new trick. Move your left stick clockwise, counter, left to right, or up and down to signal a certain suit of cards. Push the left stick in a certain direction to stack the deck one way or the other. All of it needs to be remembered, sometimes while trying to do other mini games as well. I found myself pausing the game frequently to look over my crib sheet to know what my next moves should be. If I had played an hour or so every couple of days I would have felt completely lost. 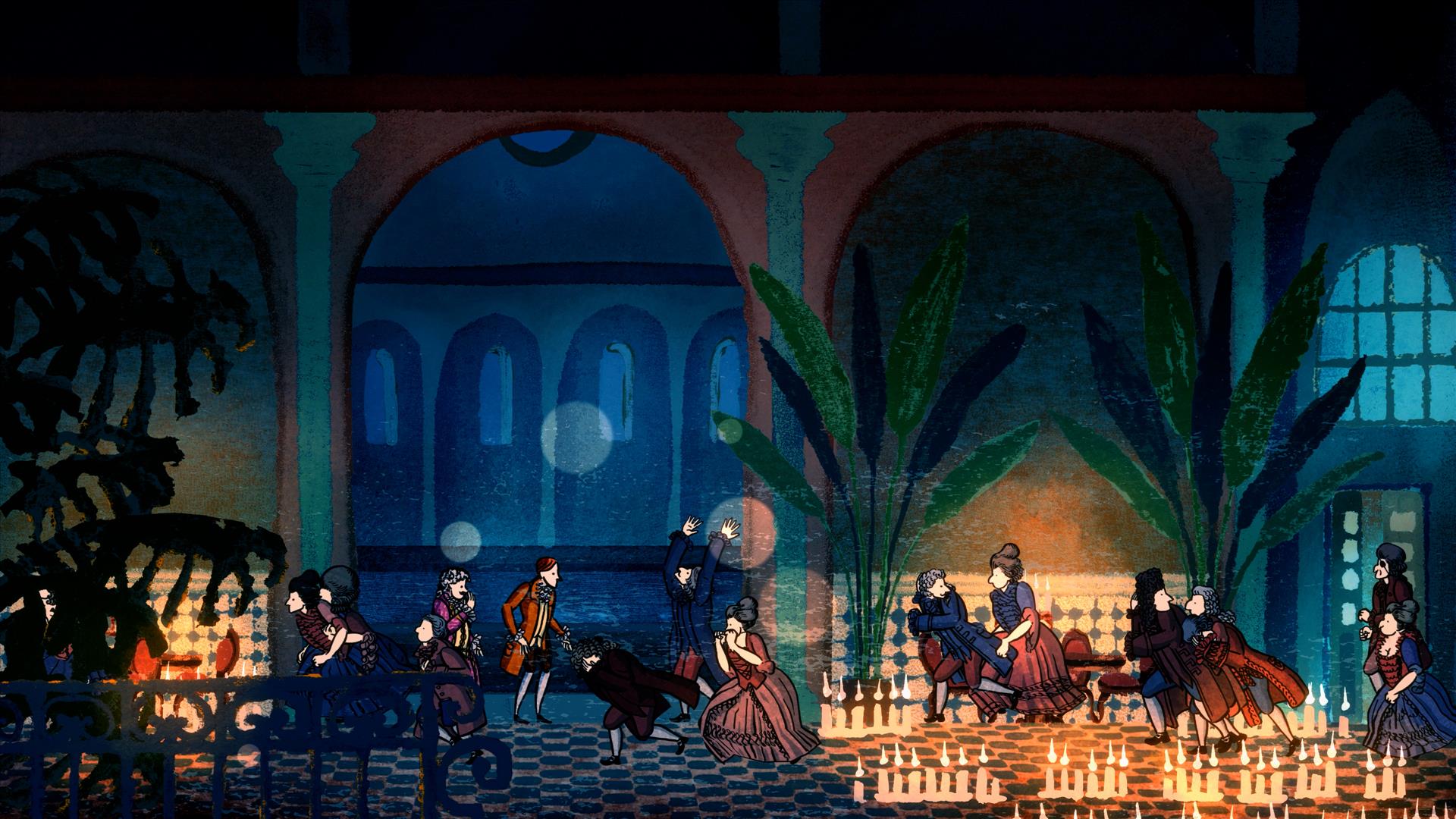 The world of Card Shark is great to look at, and to listen to as well. There was something about this art style that I loved. The watercolor aesthetic was pleasing to me. I enjoyed walking into a new establishment, ready to take everyone for all their money, and looking around the room, taking in everything that was going on in the background. The art and detail that went into each new scene was not missed on me.

My issue with Card Sharks was the overall feeling of dissatisfaction it gave me. The whole time, I felt like I was playing a big minigame. I found most of the tricks interesting, but lacked any real world anchor to them. Maybe it was due to Card Shark not actually having any card game mechanics in it. I don’t think it helps that you are learning a new trick before every new scene, especially early on in the game. The story never really drove the game either, leaving me feeling like I was just going through the motions because of the cues I was getting about where to head next. 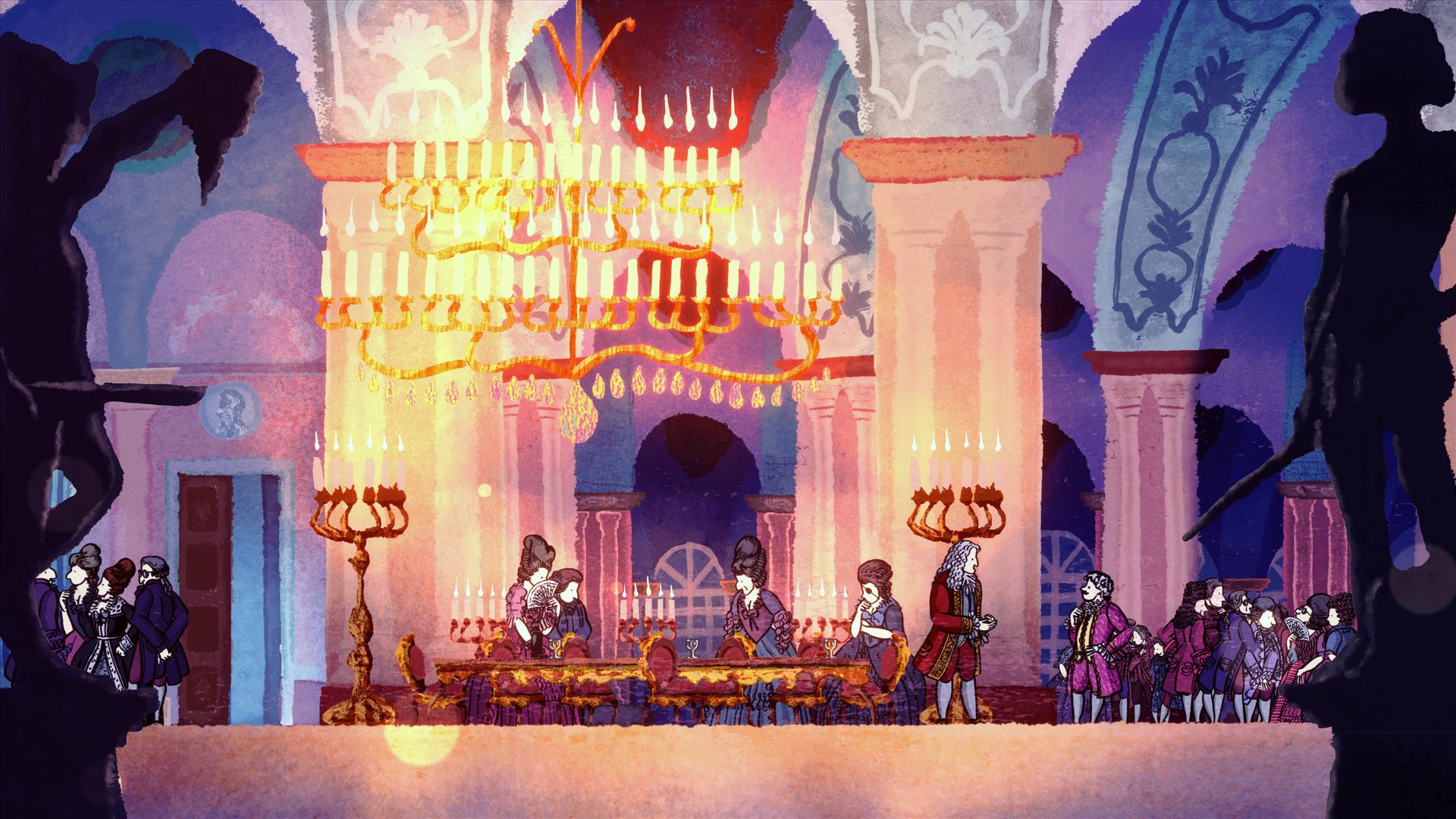 But all that said, there is nothing quite like Card Shark. This is a style all unto itself. I don’t even know what basic genre to put it in. There’s a bit of mystery, some suspense, a little revenge to be had in Card Shark. While I’m not in love with Card Shark, there is a lot to enjoy. The art is fantastic, something publisher Devolver Digital does a good job with. The look and feel of Card Shark is unique. The mini games are interesting to learn, and watching a massive trick go down the way it is intended is very satisfying. It is also unbelievable how frustrating it can be when you think it is going well, only to find yourself thrown into jail when it doesn’t.

Card Shark has a few things going for it, not the least of which is unique gameplay. I've never played anything like this. The watercolor style looks great. But the story feels like an afterthought; it never felt important or drove the actual game anywhere. The card playing part of Card Shark is nonexistent, instead focusing on the tricks you are trying to pull. While the tricking is fun, there is a lot to remember, and some of the tricks feel silly to perform. This might not be Devolver Digital’s biggest game to date, but it does have that feel that most Devolver Digital games give off - a unique game with a unique look and feel. Card Shark doesn’t fit into a genre, which is something to admire.