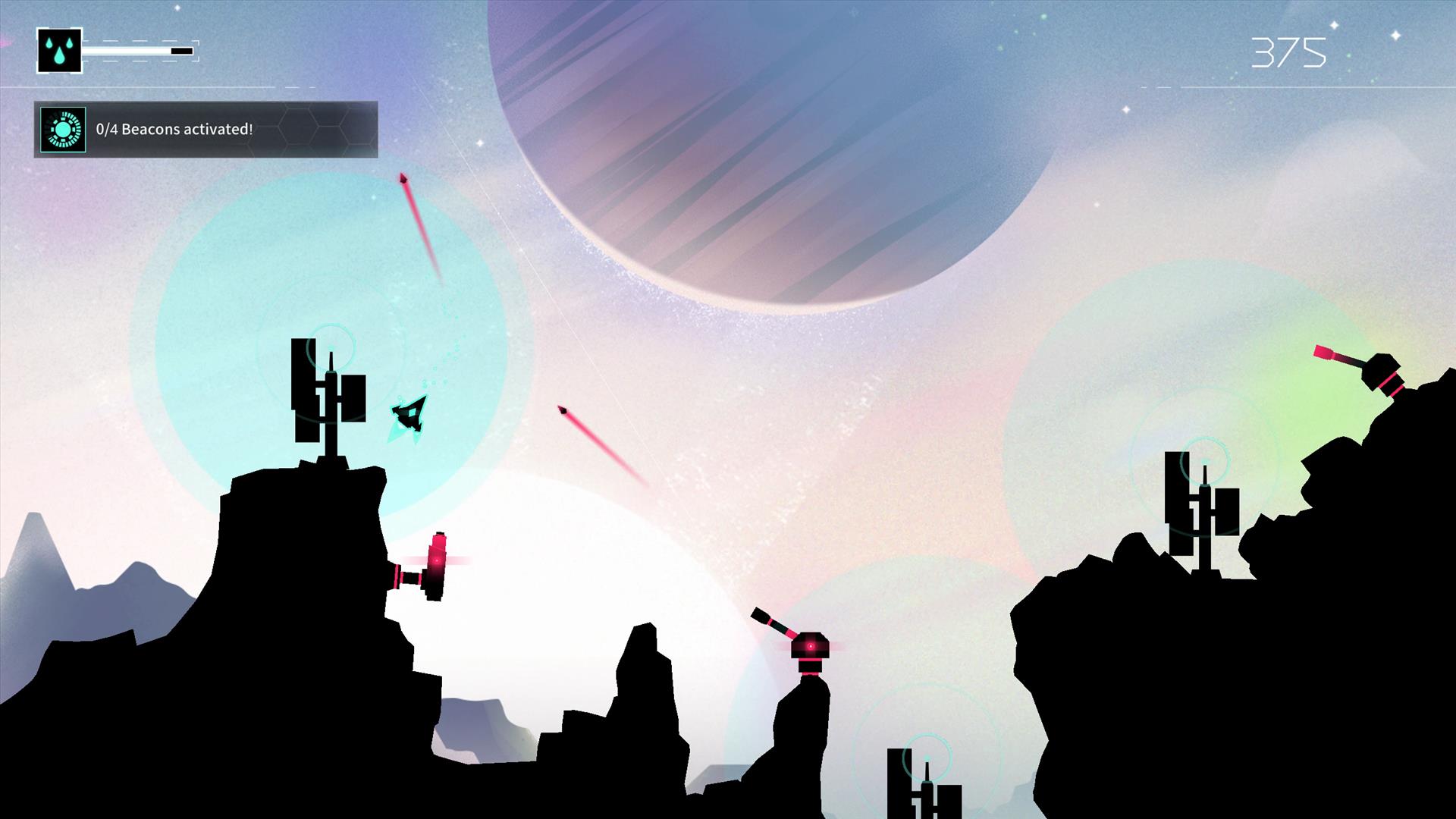 I have an Atari Arcade1up. It comes with 12 games, including Tempest, Centipede, Millipede, and Asteroids. There's also the 1982 vector graphics game Gravitar. It plays with buttons, and not the trackball as I thought. One button rotates your ship right, the other, left. Then a separate button fires your weapon, and ANOTHER button to use the thruster. It kicks you right in, telling you to land on a planet with different bonus points, and you have ZERO time to think about what to do, because 2 enemies are chasing you. You scurry to the planet, and your screen switches to your ship descending to the turf below. It sometimes tells you what to do, but sometimes, it doesn't. Then you explode to bits, because you have no idea what to do. Then your lives are gone. I went through this sequence about 4 times, before I vowed to never play this game again, because there's no reason this game was so difficult.

But then Atari announces Gravitar: Recharged. And I, like the crazy person I am, took it on. The more things change, the more they stay the same. This game is TOUGH! 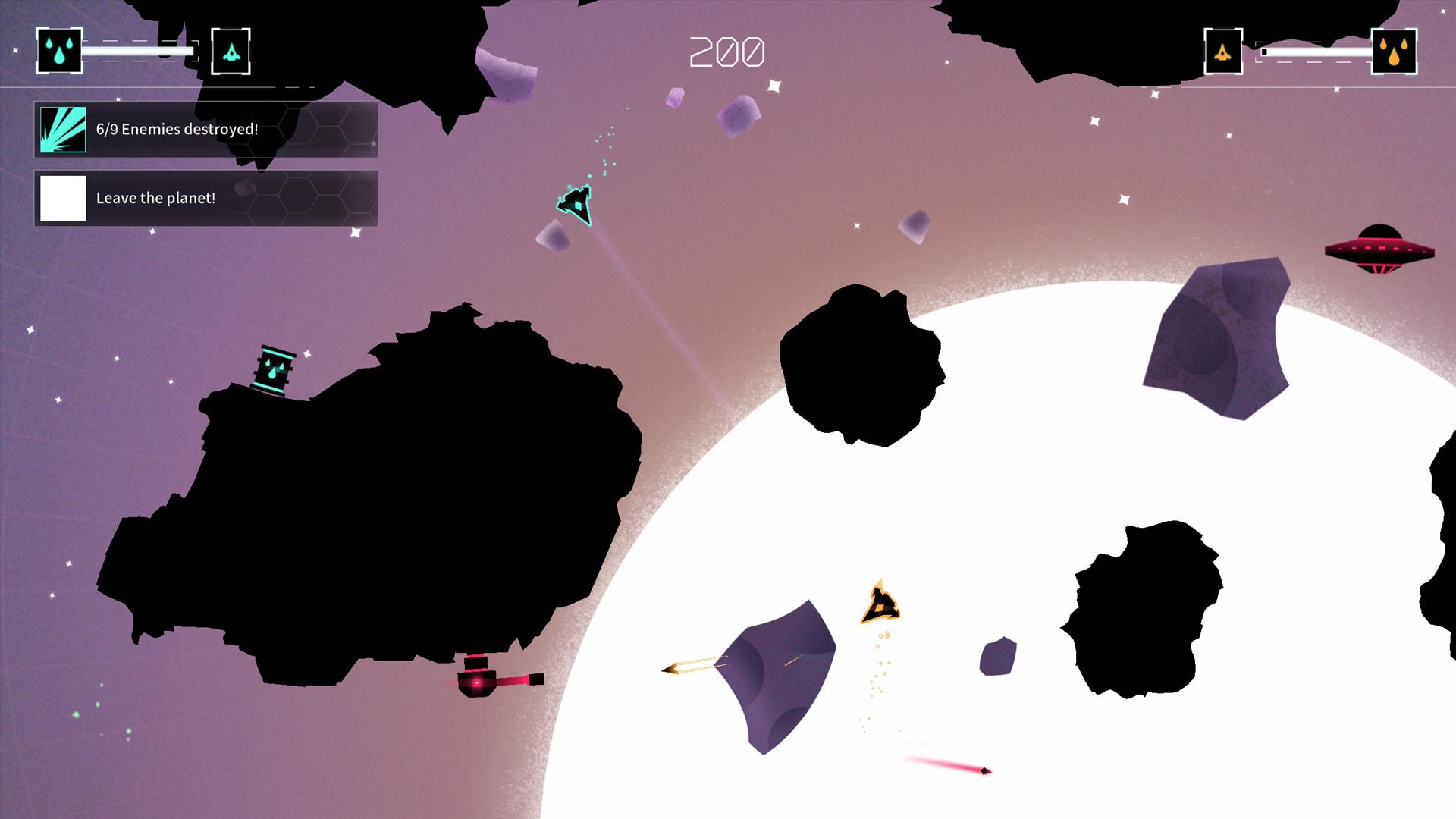 The Atari Recharged series usually has a neon green or purple color scheme. The user interface is usually in block letters and numbers similar to the old vector graphics. Gravitar: Recharged has changed all that. There are full backgrounds, whether you're in the solar system, flying around to enter planets, or in the actual planets. The backgrounds are simple, but gorgeous. The instructions for the planets are clear, and even the players' lives are shown sitting at the top of the screen so you don't get confused.

It's all action from there. Your enemies, or most things that can destroy you, are red and black. Things you need to interact with are teal and black. This makes it easier to shoot everything that's red, and interact with the latter, whether it's activating something, or picking up something with your 360 degree tractor beam. In other words, if it's red, destroy it, or avoid it. The music, of course, is masterfully done by Megan McDuffie. So at least there's some cool ominous music to listen to while you get battered. 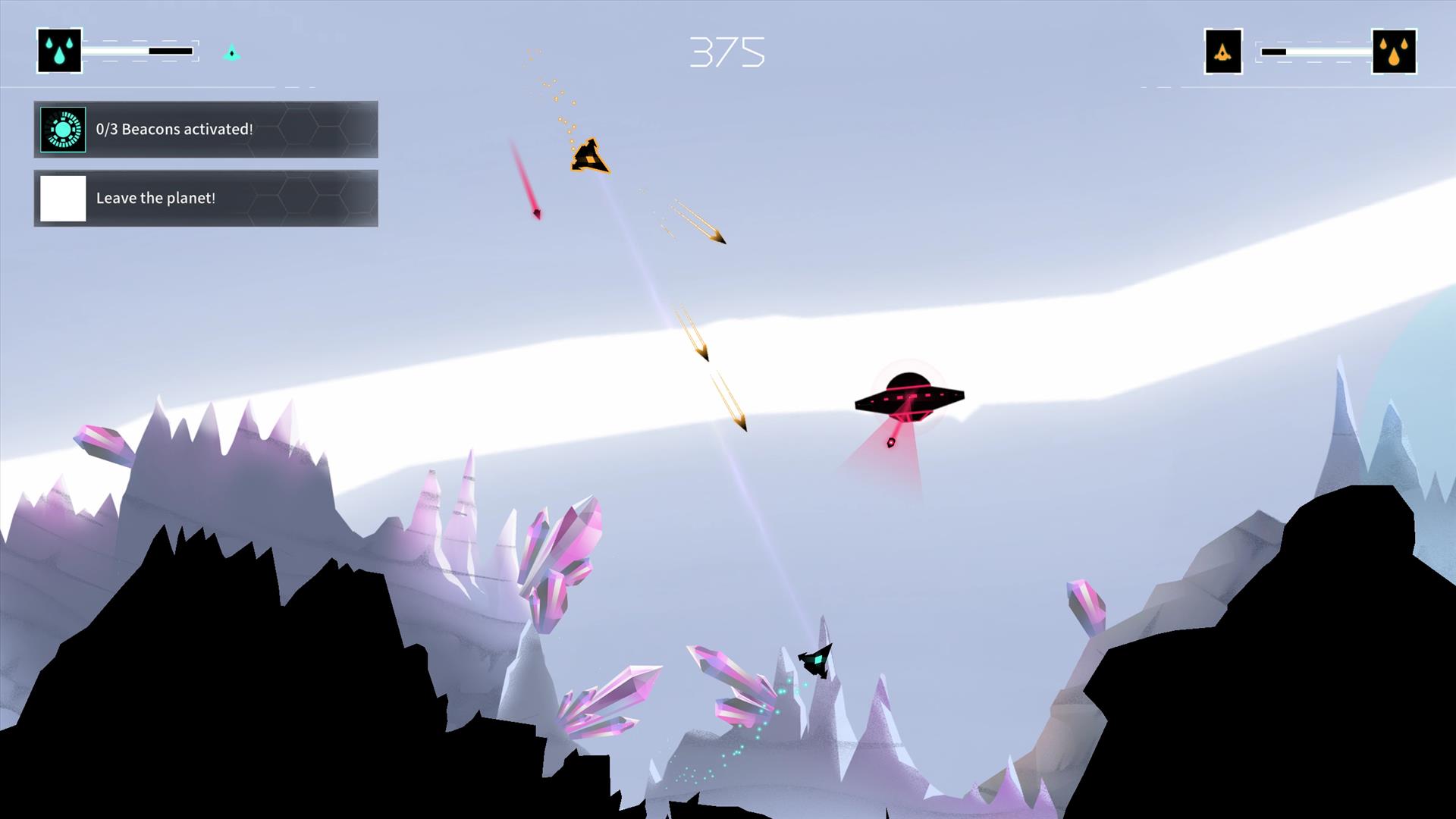 That's right, your ship has a tractor beam. It can be used to pick up items you will definitely want to use in the game. There are different power-up items you can use for offense. See, your ship shoots, but only three bullets per button push. With the power ups, you can get a spread gun, a homing shot, and even a rail gun. There is a meter in the lower right corner to tell you when each of these power ups will run out, so use them wisely. Your ship also has a one-hit shield. Once the shield is hit by an enemy shot, or a wall, or an asteroid, or a laser barrier, you have one more hit, and you're done. But don't fret, your shield eventually replenishes in about 5 seconds, though that seems WAY too long when everything is trying to take you down.

Controlling your ship is mostly like the old game, except you rotate your ship with an analog stick, using your thrusters with a trigger. I will tell you that if may feel like your ship doesn't want to cooperate with you, and this is the meat and potatoes of Gravitar. Controlling the ship is the most difficult part of the game. Everything is more powerful than your ship. If it gets hit, the shot pushes you, and you have to course correct before you run into pretty much anything else and explode. Sometime using your tractor beam to pick something up while moving will send them into the atmosphere. I would say that once you master how to fly the ship the game gets way easier, but I don't know if that's even the case because it is impossible to master flying the ship.

The arcade mode starts you off by asking you if you want bonuses, via taking away things from your already difficult quest. You can have one life, no shields, or no powerups. I do not recommend these during your first playthroughs, or frankly at all. Your overall score is uploaded to an online leaderboard, but I don't know if it's worth it. Then the game begins, and you are thrust into the solar system. There are planets orbiting the solar system. To enter them, you have to get close enough to them, all while avoiding asteroids and the sun.

There are 6 planets in all, and they all have their different missions. One planet has you destroying all the enemies. Another will have you activate beacons by hovering near them for around 5-7 seconds. The hardest ones are the reactor missions, where you navigate your ship through a very tight space, blow up the reactor, and have to escape before a timer runs out. Leaving the planet after finishing these missions is easy, as flying in any direction off the screen counts. There are some caveats. If you fail during a mission, the planet saves your progress. If you complete the mission, and get smacked, the mission is still complete. Destroy all the planets, and you move on to the next solar system. I will spoil that there is an achievement to complete 4 solar systems which is 24 planets, because math. And the difficulty is exponentially harder per solar system. Also, sometimes when you lose while in a planet, you respawn out in the solar system, into a random asteroid, and then fall into the sun, because...yeah. This game is tough. 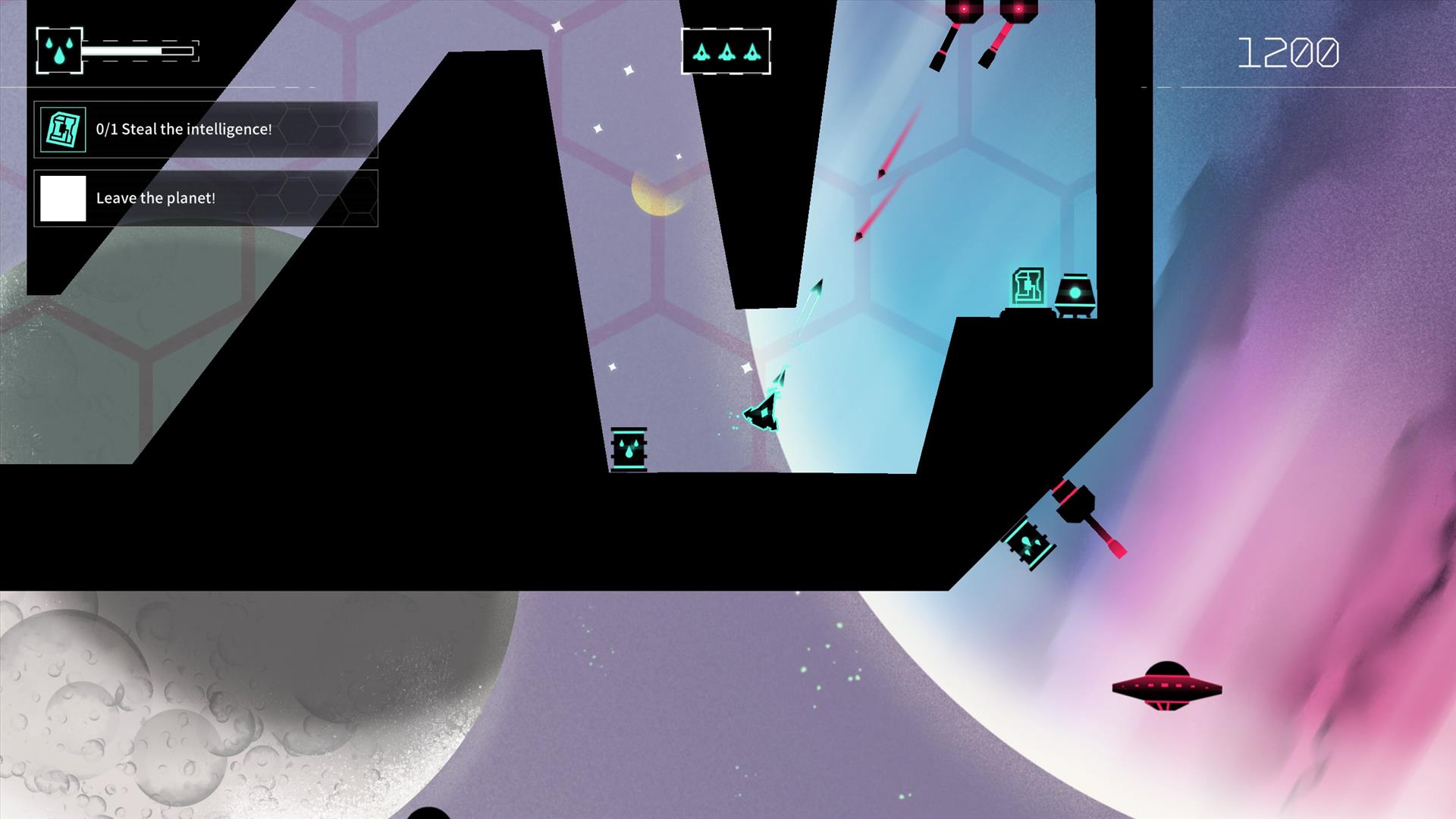 The secret to your success is the Missions Mode. Missions are just random missions without the solar system, asteroids, or the like. Here, you can try out missions with certain parameters. Destroy everyone with a ray gun power up, or navigate through this cave to work on your ship's maneuverability. These missions are KEY if you want to get any practice in for arcade mode. Missions Mode teaches you all the things you need to know. As far as your score goes, you have a base score per mission, but that score is added to an over all score, and uploaded to a leaderboard. I'm sitting at 9th at the time of this review. The issue in mission mode is, if you fail a mission here, you start all the way over. So, if you activate 5 beacons our of 6, and get blasted by a homing missile while dodging a UFO, and you can't shoot either because they're covered in a forcefield, sorry about your luck. Start over. This game is TOUGH! 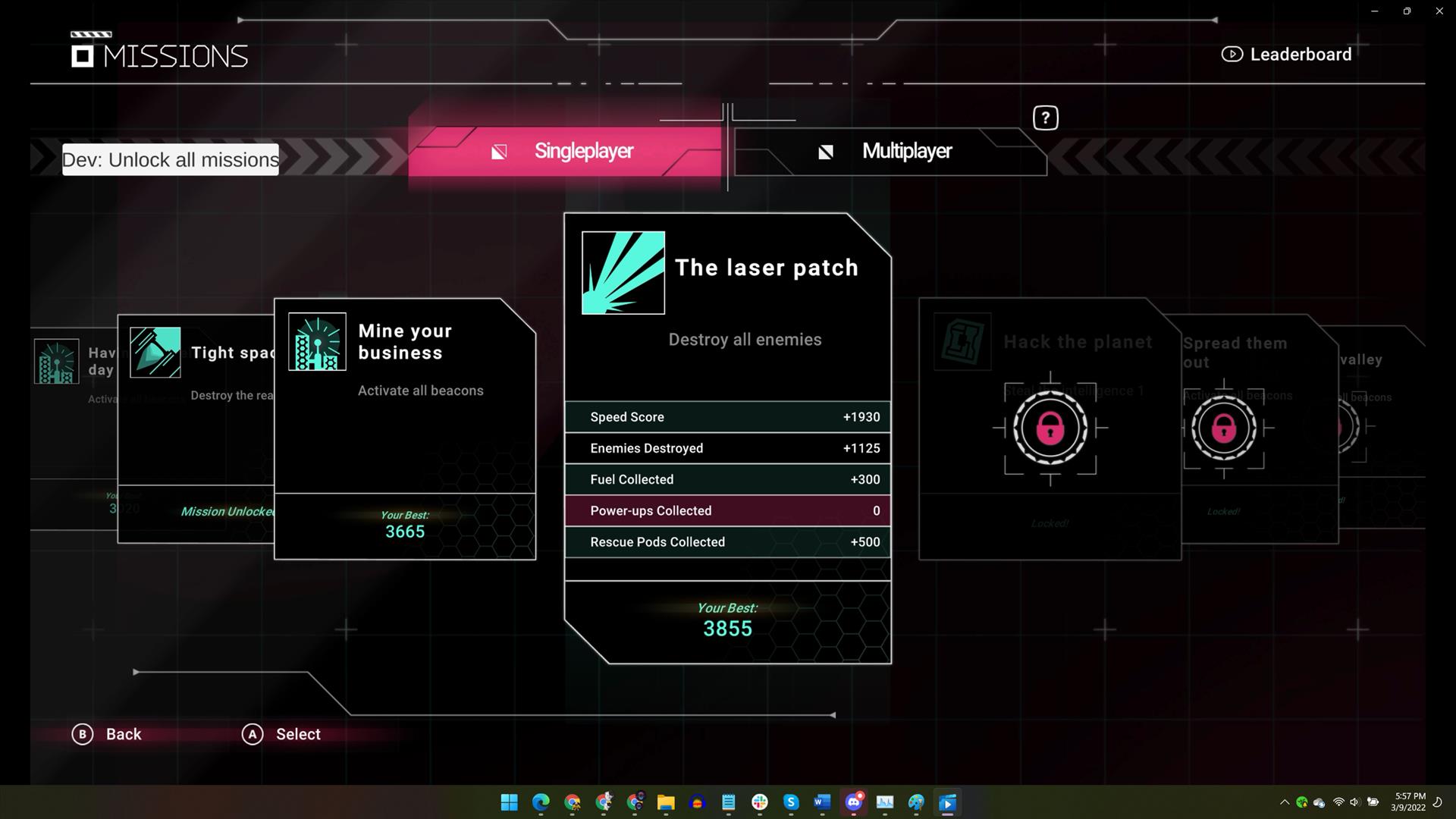 The enemies here are a mixed bag. The only ones that can fly around are the UFO's and they are the easiest in the game to defeat. This is because no matter how good you think your aim is at the stationary targets, it is not. There are your regular run of the mill turrets. They fire one slow, menacing Jason Voorhees-like bullet once they see you. They can only fire at 180 degrees, so if you get beyond that, you're golden. Then there are the homing missile enemies, who again, fire a slow missile toward you. And just when you think you've outrun the missile, you have not. It keeps coming like Michael Myers. You can shoot these missiles before they hit you, but good luck with that. There are also proximity bombs, that hang out like Audrey 2's. Totally harmless looking, planted into the ground, until you get close. You can escape them, and you can destroy them, but make sure you are outside the blast radius, or forget your shield, because you're done. I'll reiterate that walls are not your friend. Don't even think about it taking a hit on a wall to avoid a bullet, because the wall will push you into that bullet. There are energy walls too, that have an on/off gimmick. Fly though when they're off to carry out your objective, but don't be there when they come back on, or again, game over. There are more than this, but I feel like I've given you enough nightmares on your street.

There is some solace to all this. Again, all the enemies can be taken down with one shot. In arcade mode, if things get hairy, you can leave the planet without penalty. The beacons are really easy to activate, and you won't lose if you run into them. Another tip is that if a UFO is protected by a forcefield, you can make it chase you outside the generator's range, and blast it. Do NOT rush though a level. Take your time. There is no penalty, or achievements for time. On the contrary, there is one where if you make it out of the reactor mission with one second left. Also, keep shooting. You have unlimited bullets. 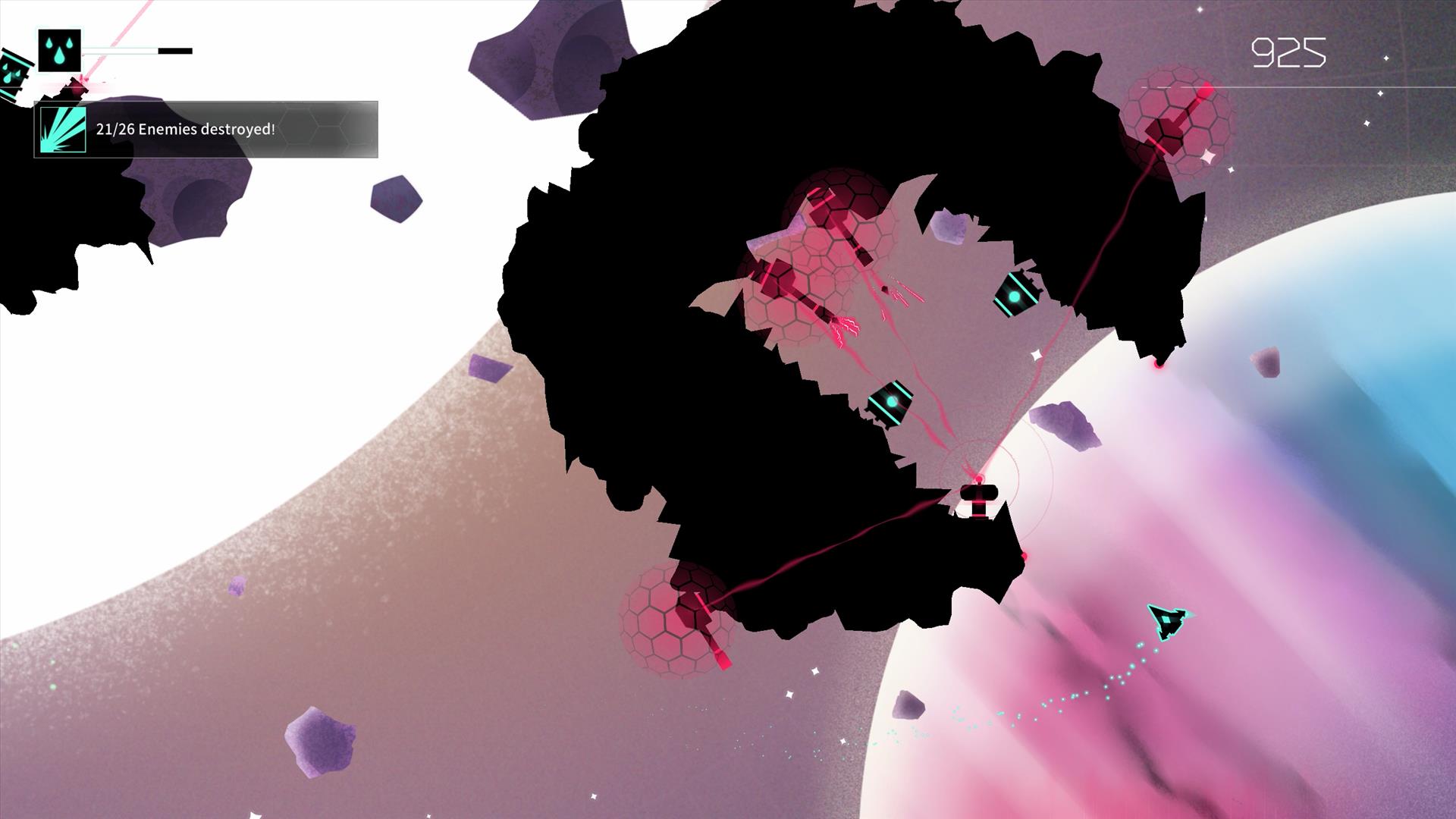 The top left corner is your fuel meter. So find those and get them as soon as you see them. If you run out of fuel, your ship just falls to the rocks or sun below. You can also shoot the fuel pods, and blow up things in it's blast radius. The enemies can also do this to you, so if you're using the tractor beam, and the fuel pod gets shot, it's curtains. The game is also called Gravitar. Each levels gravitational pull is DIFFERENT. Take heed to this. If the background to a level is blue, it's easy. If it's yellow, it's medium, and if it's red, it's going to take you forever. All this to say, be patient, and don't break your $70 controller. Atari won't be held responsible. There is also 2 player couch co-op, but then it's two of you getting smacked around.

Gravitar is EXTREMELY difficult. It's fun to watch other people play it, especially your friends who think they're the best at gaming. Atari continues to show you that they are here to forever challenge our mettle. Gravitar will provide the challenge you need, and reward you for your bravery. I can't even say it lacks in replay value, because let's be honest, you're not beating this game anytime soon.