Though I am loath to reduce the hard work a studio puts into a game by immediately comparing it to another game in the first paragraph of a review, it is impossible to discuss Riftbound without mentioning Plants Vs. Zombies. I’m not referring to the various shooters, deck-builders, and microtransaction-laden sequel hellscapes that Popcap’s property eventually evolved to encompass, but the first PVZ – the good one. If you, like me, loved Plants Vs. Zombies in its initial strategic incarnation but have seen little reason to return to the franchise after EA turned it into a sad, shriveled milk cow, well, I’ve got a treat for you. Or rather, Australian development house Barrel Smash Studios has a treat for you.

Riftbound is Barrel Smash Studios’ first game, and it is a corker. While it undoubtedly owes a debt of gratitude to Popcap’s original masterpiece, Riftbound takes that original addictive game design (and really, why isn’t this a genre at this point?) and cranks the volume all the way up, ratcheting the tension and intensity to the point where I was forced to turn the difficulty down to “Casual” to get past certain levels in the game. 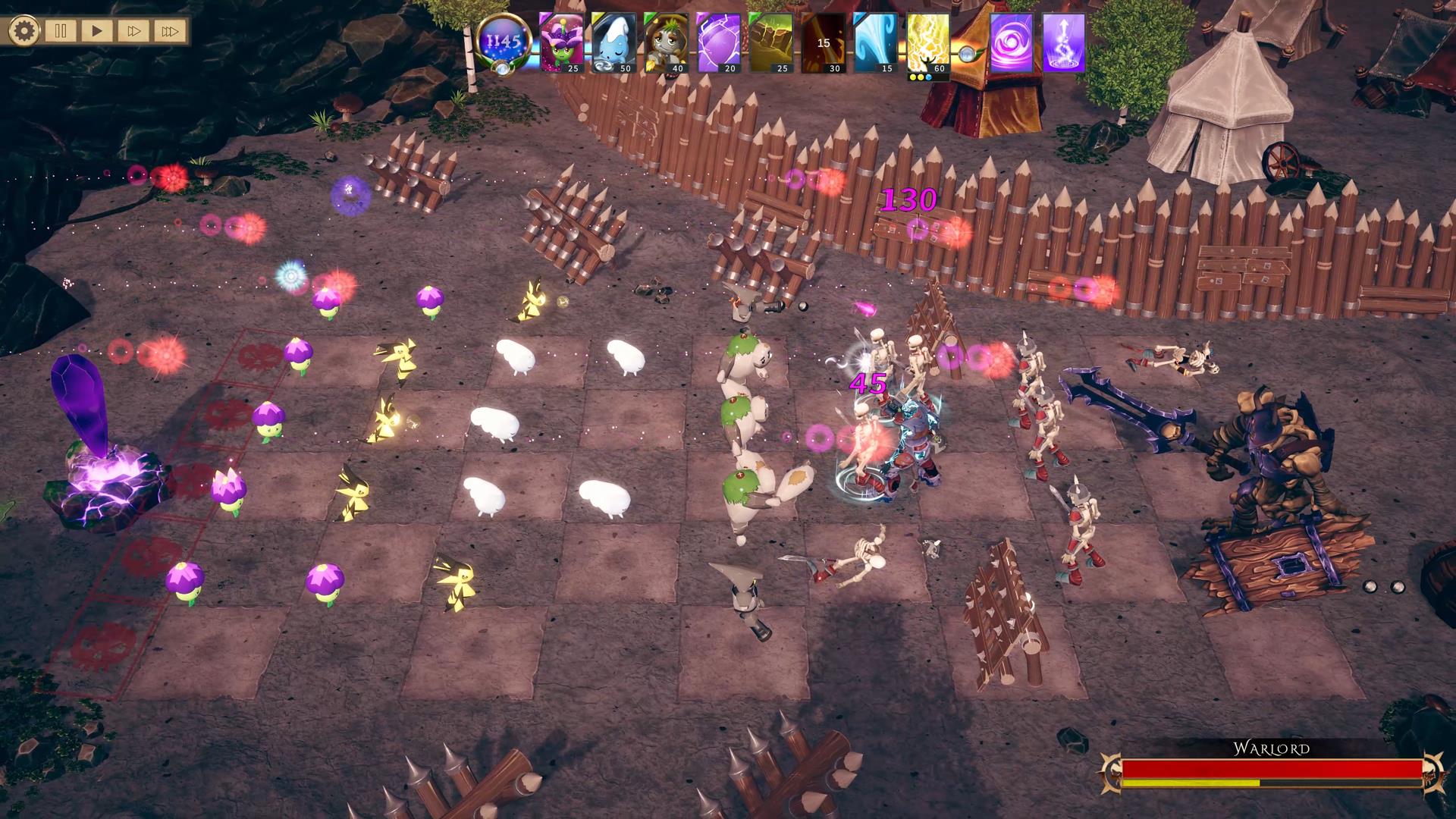 There ain’t no shame in my game – Riftbound at times requires the same sort of lightning-quick response time as certain RTS games. In the game’s later levels, you had better have a plan going in, as you will be walking a razor thin edge, and plopping one unit down in the wrong spot at the wrong time can lead to an instant game over.

The initial flow of the game will be immediately familiar to anyone that played Plants Vs. Zombies in the early 2000s. At its base level, you have three types of units – those that gather energy (or resources, if you prefer), those that attack, and those that defend. There are five lanes of action. At the start of the game, you have a very limited amount of energy, and perhaps ten seconds before an enemy starts marching towards you in one of the five lanes. If it reaches the left side of the screen, you lose. Do you place a resource unit, or an attacker to keep the bad guy at bay? And just like that, in Riftbound, you could lose the level. But not early on. Riftbound has a very nicely drawn learning curve, which brings players into the game by introducing the core concepts one level at a time. Starting with just a lane or two, Riftbound teaches players how to lay down a simple attacker to shoot baddies before they reach the end of the lane. Then the defensive rock guys are introduced – this game’s version of the trusty walnut. By placing attackers behind defensive units, and keeping your resource producers behind them, the player can construct a well-oiled machine of destruction, but only if they are careful (the obsessive compulsive in me demands clean rows of units).

Before long, the player has a number of different units to choose from – including various element-based attackers that each do their own type of damage. Over time, more and more enemy types are introduced to keep the player on their toes. Waves become thicker, attacks become stronger.

After communicating the game’s core concepts, the creators of Riftbound quickly start veering off into original mechanics. You can almost picture the folks behind this game in a room with a whiteboard, examining the core tenants of PVZ and then addressing each one in turn and asking “How do we make this cooler?”. In Riftbound, gameplay is not just about where you place units because of what they do; it’s about what you do with them after you place them. The first new concept that comes into play is evolution; you can – for a cost of both resources and time – evolve your units so they do better tricks. Resource gatherers can be evolved to psychically rip equipment from attacking units, converting it into energy. Water attackers can be upgraded into ice guys, slowing down the advancing horde. Rock guys can be evolved into burlier rock guys, who will explode and do damage to enemies upon defeat.

Evolution must be done one unit at a time, and you have to carefully plan when you do it, as a unit will be vulnerable to attack while it is evolving. This had me carefully planting two rows of defensive units, then evolving the back row while hoping that the front row could withstand the endless onslaught while evolution took place. And of course, each unit doesn’t just get one final form to evolve into; over the course of the game, players unlock a skill tree for each unit type, providing a wildly varied selection of powers to choose from. Players also unlock spells, which give temporary (but extremely helpful) boosts. My early favorite was probably the rock wall, which pops a defensive wall into place across three lanes, giving the player the briefest amount of breathing room to make life and death decisions. More advanced spells come in the form of combos, meaning that you can only cast them on lanes where you have particular units played in conjunction with each other. Don’t try to cast a Boon of Healing without an Aether resource and a Water unit in the lane, for example, or you will be futilely jamming on a button while your units are gobbled up by the horde.

You can’t just grab every skill and run into battle willy-nilly. You start each level with a certain number of “Spell Points”, which limit how many units, spells, and evolutionary states you can take into battle. This leads to a lot of teeth-gnashing decisions, as many of the game’s abilities start to feel indispensable (and once you get access to the spells that fling bad guys all over the map like ragdolls, they are awfully hard to leave behind). The player also gets access to upgrades, which give incremental boosts to units that make them just a smidge more powerful in battle. The only real nitpicks that I have about Riftbound are a couple of weird UX issues. The game works swimmingly with an Xbox controller, but for some reason, navigating the mission map is strangely finicky. I kept my mouse close at hand for level selection. There are also a few issues determining which lane is which; I lost more than one battle by accidentally putting a unit in the wrong lane. I’ll elect to share that fault with the game design – I would guess that my problems were 40% lane definition, 60% carelessness. I also wouldn’t have minded some visual indicator of a unit’s health. Nothing as crass as an HP bar, mind you, just a bit of wear and tear to let me know when someone was about to fall to the enemy. But really, these issues are minor in light of what has been achieved with this game.

Sid Meier once described games a “a series of interesting decisions”. Riftbound takes that formula and distills it down to its essence; to succeed in Riftbound’s later levels, the player must make tough, interesting decisions with the speed of electricity. In many ways, games of this nature take the RTS genre and strip it back to its barest essentials, leaving an ore deposit of the richest video game minerals for players to mine. There is really no reason to remake Plants Vs. Zombies. That game still exists (and my kids are literally playing it in the next room as I type this). The only reason to approach this sort of game is if you have a plan to make it better in ways that EA and Popcap could never quite nail. Riftbound achieves that lofty goal, moving this rather neglected genre of game into some surprisingly deep directions. Riftbound elevates what has long been considered a casual game type to something worth the attention of serious gamers.

Riftbound is a total nailbiter of a game. Barrel Smash Studios takes the Plants Vs. Zombies model and elevates it to something that requires speed, strategy, and precision at its highest levels, ultimately showing what heights this neglected genre can achieve. Show up for the casual fun, stay for the hardcore gameplay and irresistible addiction.