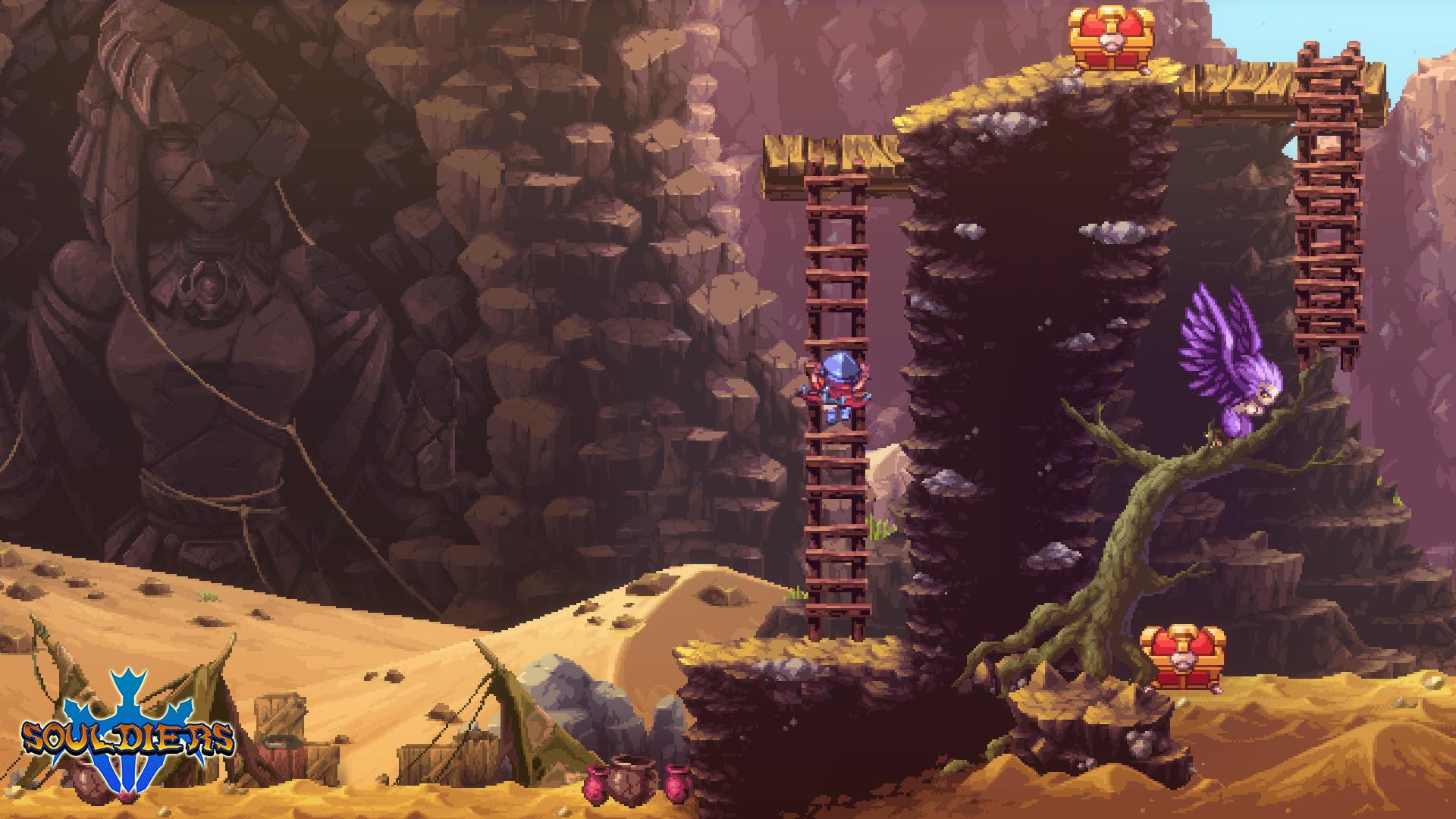 Written by Elliot Hilderbrand on 5/31/2022 for SWI
More On: Souldiers

War has broken out. Instead of taking the normal head first approach of engaging your enemies in open warfare, the king’s sorcerer suggests something a bit different. Head to them by way of a cave system, catching them off guard. Unfortunately, an earthquake near the caves traps and sort of kills your entire army. Just then a Valkyrie appears. She’s a being that wants to help you traverse over to the next plane of existence. You’re trapped in Terragaya, not quite dead, not quite alive. Now you have to make your way back to the world of the living. 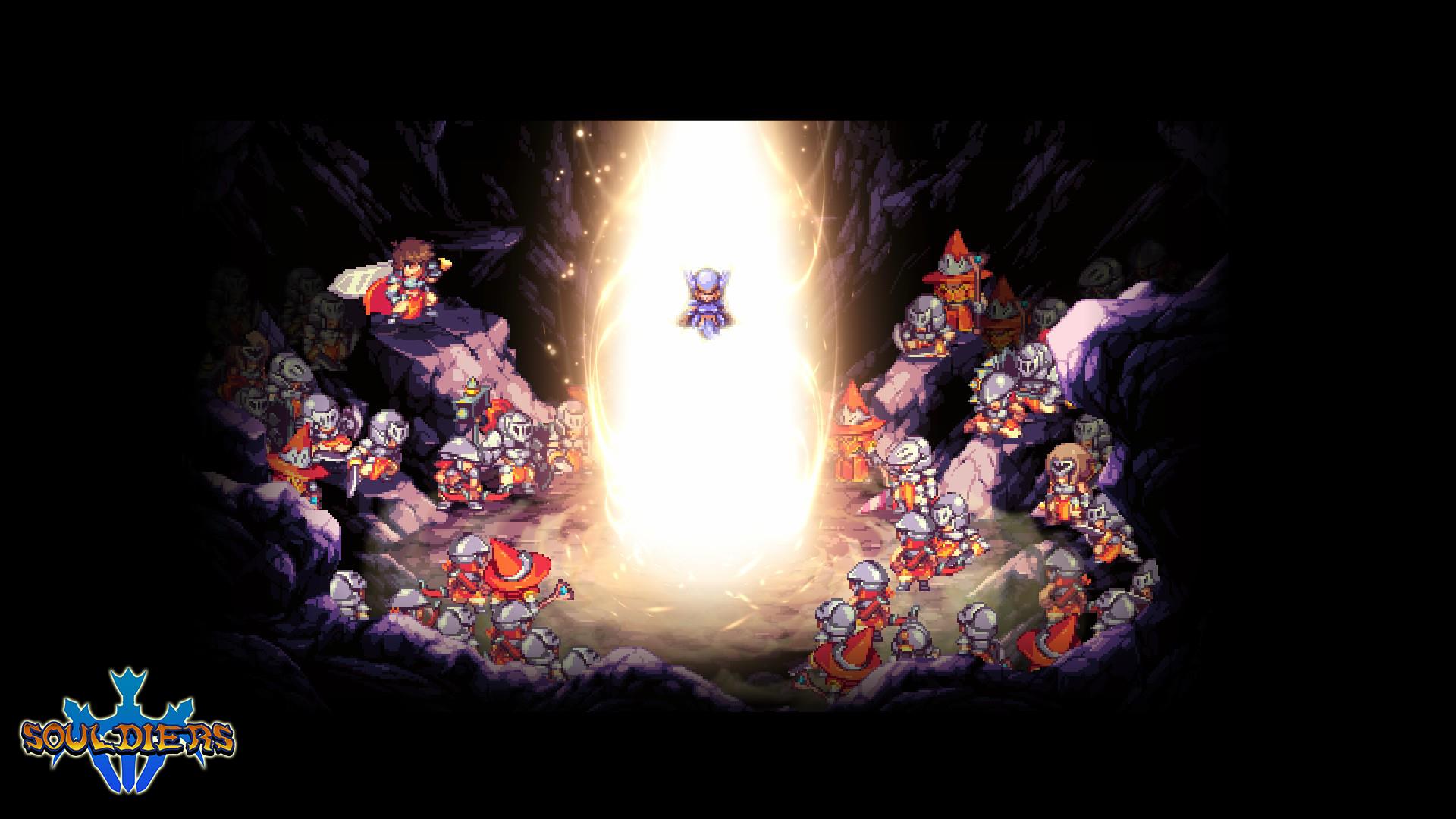 As far as Metroidvanias go, Souldiers fits the bill well. There is tons of exploration to be done. The world of Terragaya is big. Big enough to get lost in from time to time, which I want to happen when I play a Metroidvania. A leveling system that is straight forward, but offers choices. On top of being a Metroidvania, Souldiers is also a souls-like game. When it comes to souls-likes, Souldiers wears that hat well too. Each of the three classes is unique, playing differently enough I had trouble choosing which one to stick with long term. The game is also unforgiving. Precision at every step of the way is required. If you mess up at any point it will spell disaster for you.

Unfortunately, Souldiers having a lot of features I want in this genre didn’t help. I could not get into the gameplay. I was never able to find a groove to get into, instead finding myself flustered again and again. I haven’t played a game in a while that made me want to stop and take a break, but Souldiers had me walking away for fresh air. Souldiers is unforgiving in almost every aspect. While I enjoy learning how to engage with enemies in most souls-like games, Souldiers doesn’t really care. You can learn the moveset of enemies, but it doesn’t matter. 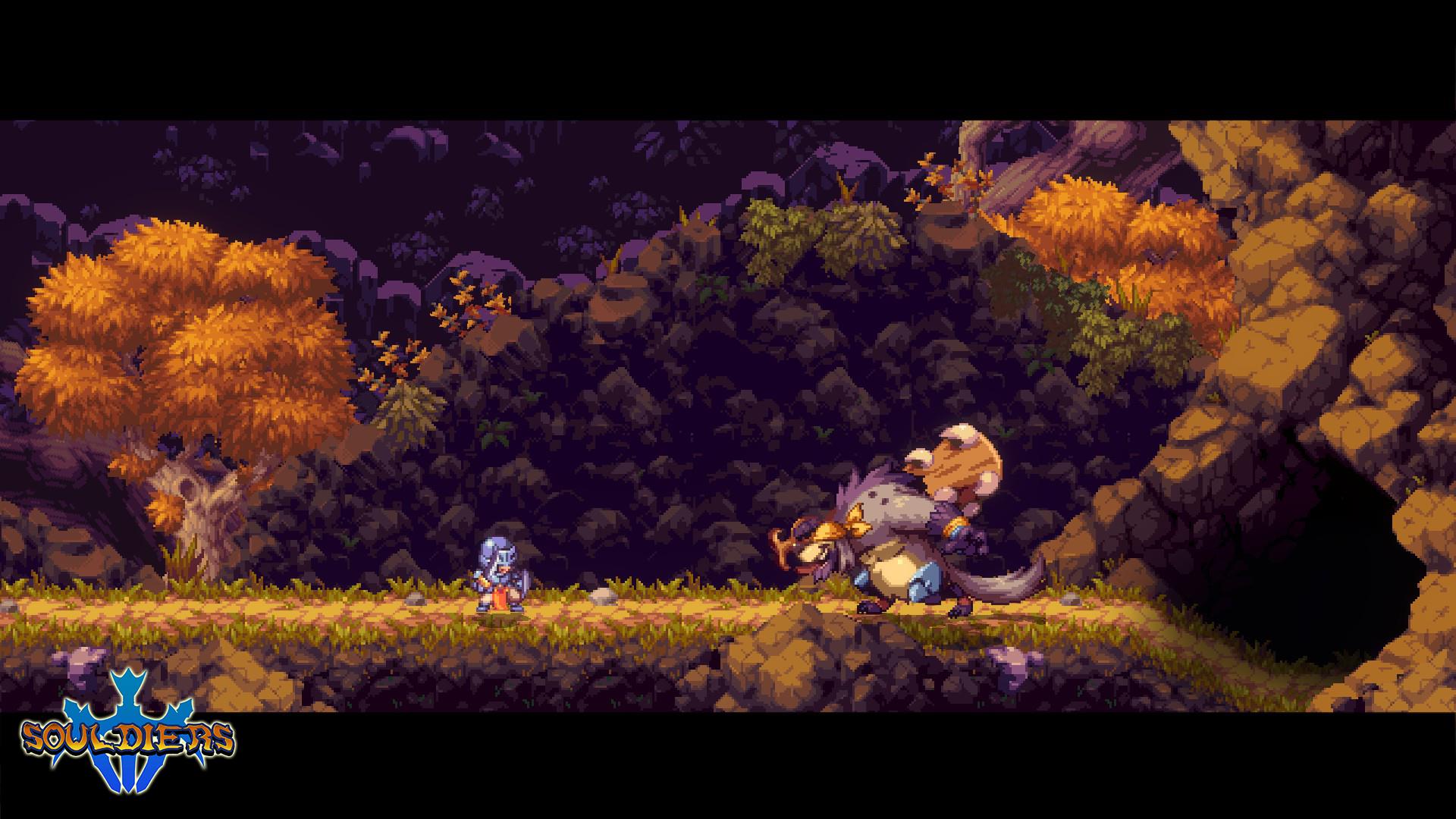 In Souldiers you have the choice of three classes to play through the game with. Once you make your choice though there is no going back. All three play a little differently. Your normal sword and board scout, a ranged archer class, and a caster. The scout is the most balanced, the caster being a glass cannon. I hated having to choose between the three, I wished I could switch classes at save points or something to that effect. Limiting each long playthrough to one class when you can choose between three was very unsatisfying. I spent an hour or so with each one before making a long term choice, finding the scout to be the most effective for my play style. 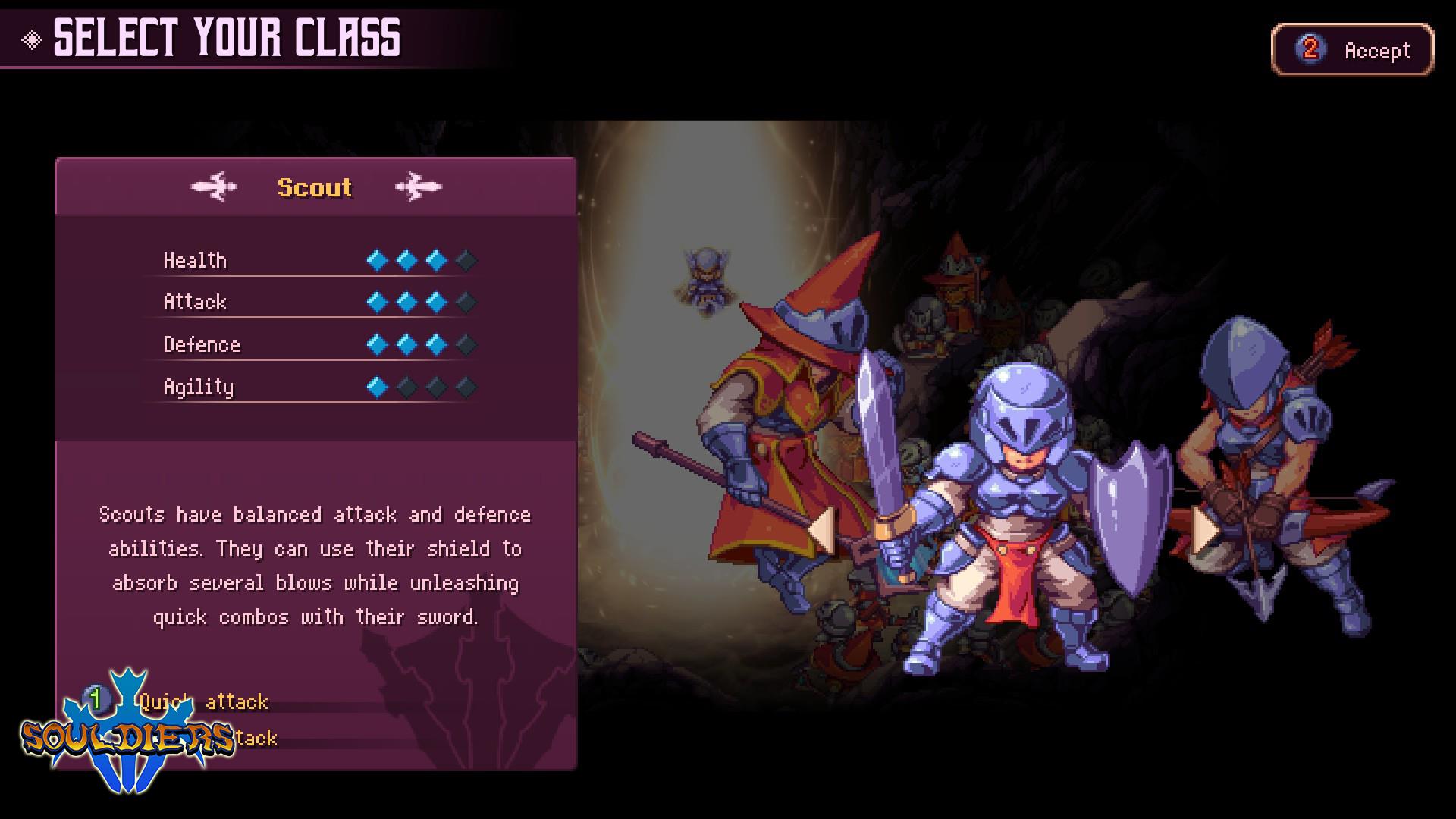 As a souls-like game I expect difficulty, in all aspects. Souldiers delivers above and beyond in this department. I found it to be so difficult at times that I was actually turned off by the difficulty. Most enemies in the main world are simple enough to understand. A spider shoots its web at you, then will run towards you. You have to jump to miss the web, then roll in the correct direction - sometimes instantly - to avoid the second attack. Maybe I’m not coordinated enough, it might be that I lack a proper reaction time. Perhaps attacks just feel cheap at times.

I had several instances of dying, and then respawning at a checkpoint that feels like it is on the other side of the map. I would then work my way back to the unexplored part, but having to face off against all the minions I already cleared, only to die at the same place again. This could almost be considered a gameplay mechanic since it occurred so often. 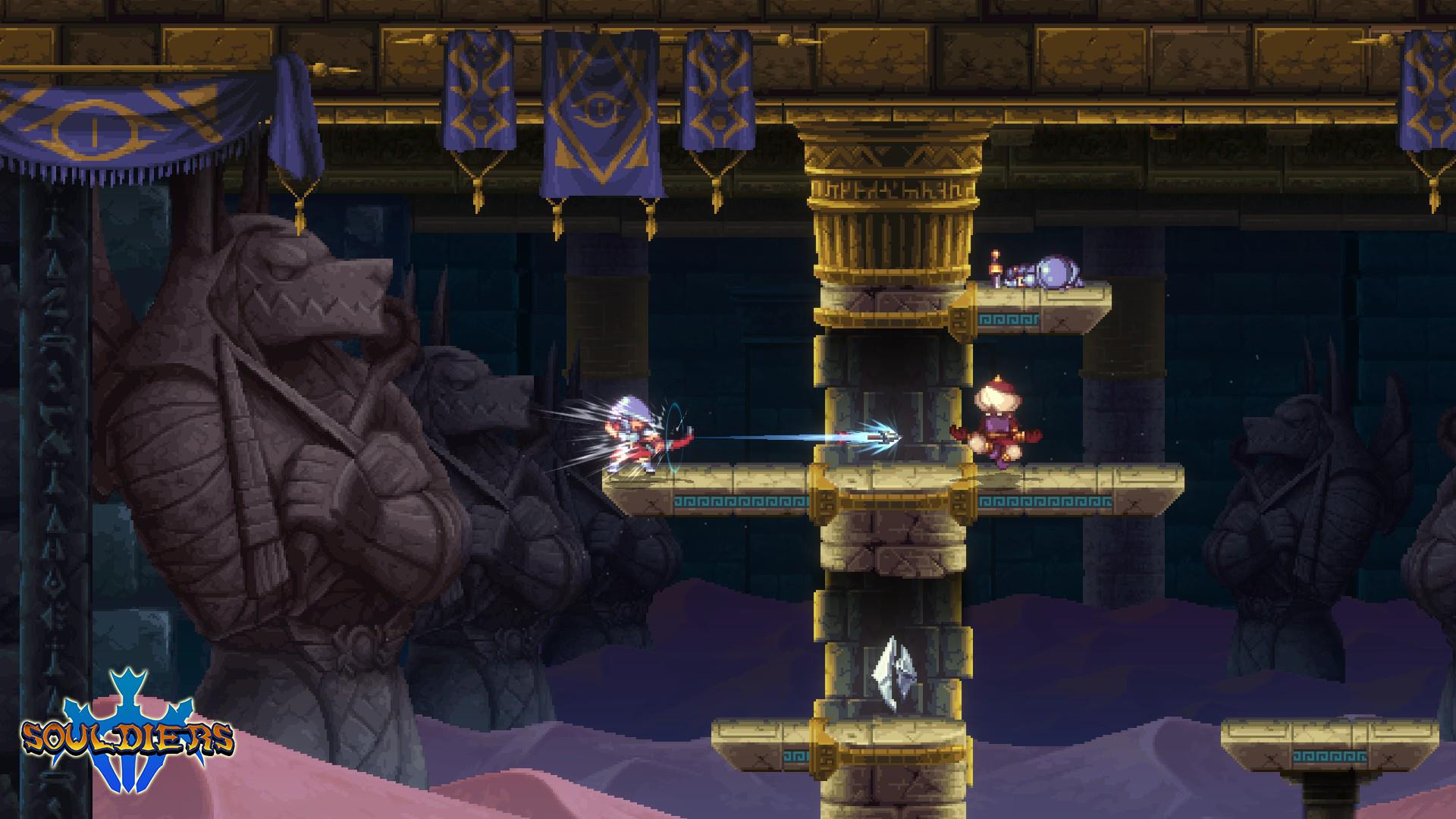 Another core issue I had were some of the puzzles. Puzzles felt like a lot of show, and no tell. I was never taught some of the puzzle elements, instead just expected to know how to solve them to advance. Early on in the first biome, I encountered rocks and levers. I walked around until I found a square rock that I could push. I pushed it to a lever and something happened, but I couldn’t tell what, or where to head to next. I knew I needed to make my way up, but my way was blocked by the rock I moved, unable to move it back. I assumed I did the correct action because I could no longer move the rock. It took another 15 minutes before I had solved the issue. For the most part I didn’t have major issues with solving the puzzles, but enough when I became stuck it took me longer than I would have wanted to find a solution. Sometimes I even gave up, choosing to take a break. 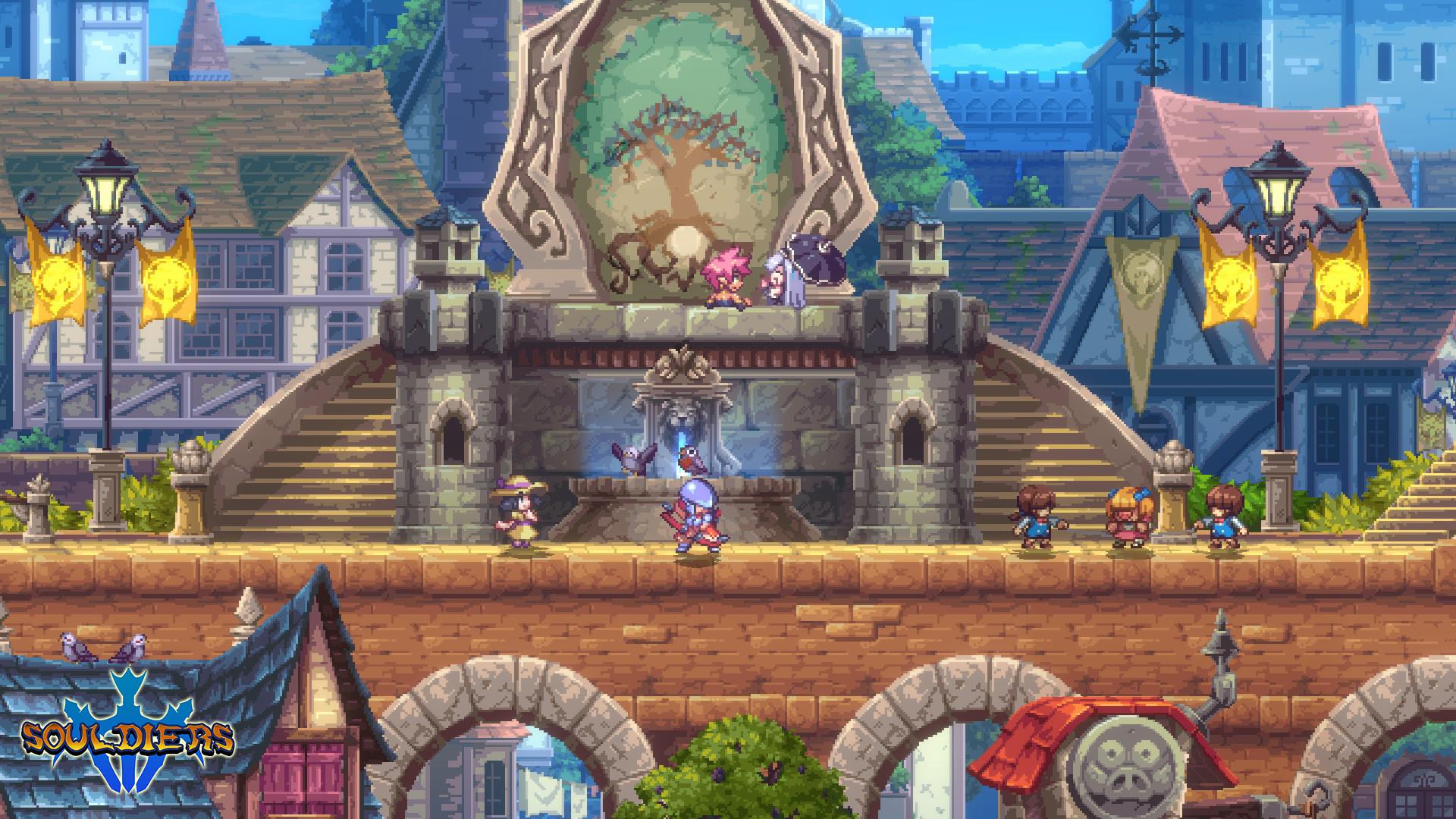 I felt lost not only on the puzzles but at times I felt lost playing Souldiers. The map is big, which is to be expected, and is welcomed. But when you leave the game and come back in a day or two the map that you have explored is blank. You can see the outline of the areas, but can not see what is in those already explored areas. I found myself just putting my Switch in rest mode and not playing any other games so I didn’t have that issue.

Loading times in Souldiers isn’t great either. I’m not only talking about loading in when you die, which sometimes took a full minute. It was so bad I would reach for my phone to kill some time. The game would also freeze on occasion when moving through the world. I would try to make a jump, my character wouldn’t move, I would try again, only to over jump into a pit and die. Saving or healing at a fountain gave me the same issues. 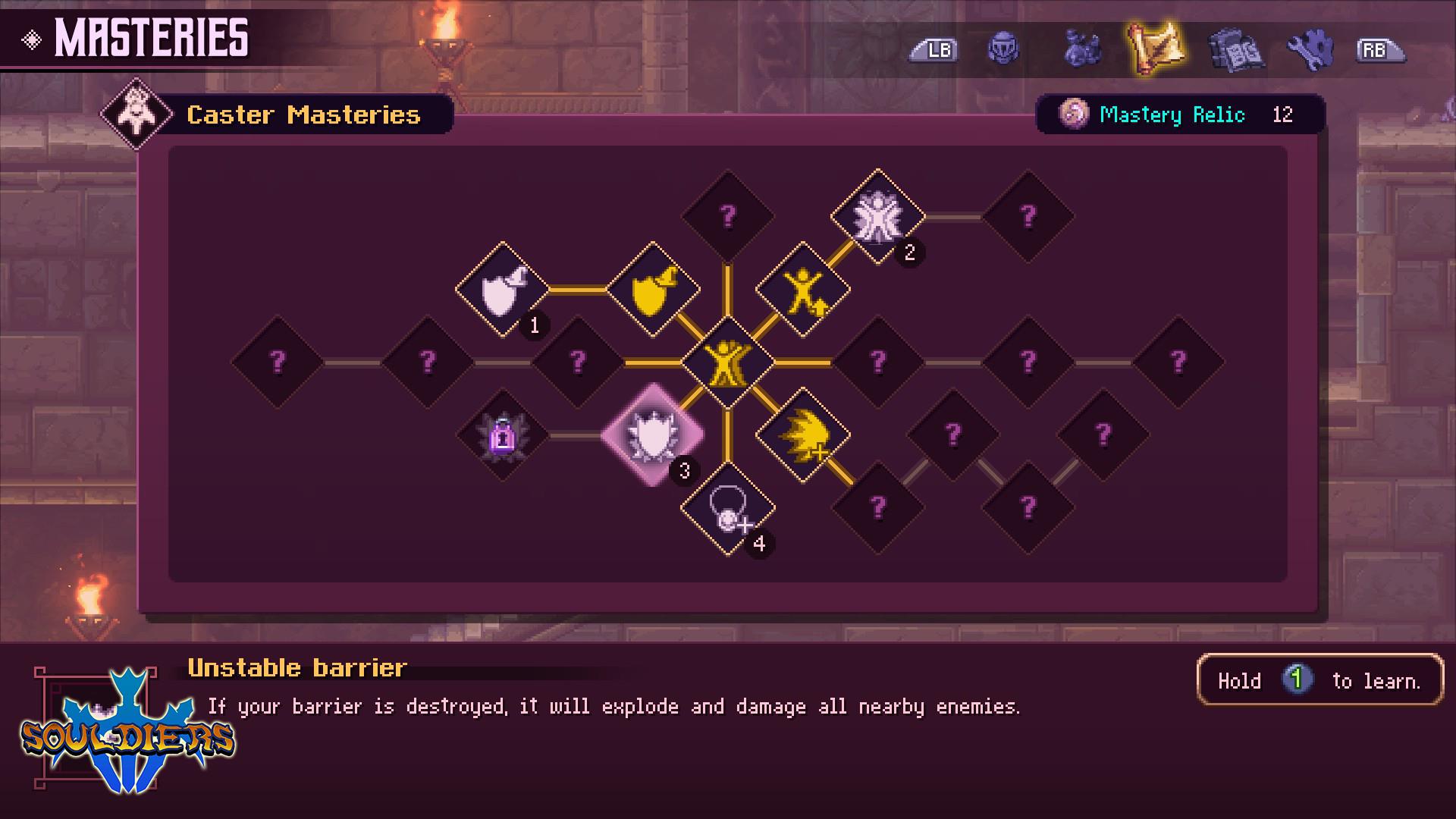 When all of these issues were combined in Souldiers, I was not having fun after a few hours of playing. Learning how to play wasn’t very hard, but I never felt rewarded when I accomplished a task in game. The map is big, and the exploring and backtracking that is fundamental to Metroidvanias is present in Souldiers. But loading or saving takes too long. And there is nothing worse than backtracking after dying, only to die at the same spot, forcing yourself to make the same trek back, yet again. Puzzles also frustrated me, I always felt dumb for not seeing the answer faster. The Souls-like part of Souldiers also turned me away. Being unforgiving in combat turned me off quickly. Souldiers is for people who bang their heads against brick walls and think on the 100th time it might actually go through.

There isn’t much that sets Souldiers apart from other Metroidvanias. A big map to explore, secrets to discover, and plenty of upgrades. But limiting players to one of three unique classes does not make me want to play Souldiers all over again a second, let alone, third time. Dying is a struggle, and loading back in after a minute to die all over again is not rewarding. Puzzles that frustrated me to no end were common enough to keep me away. Souldiers will only appeal to those who are gluttons for punishment with little reward.