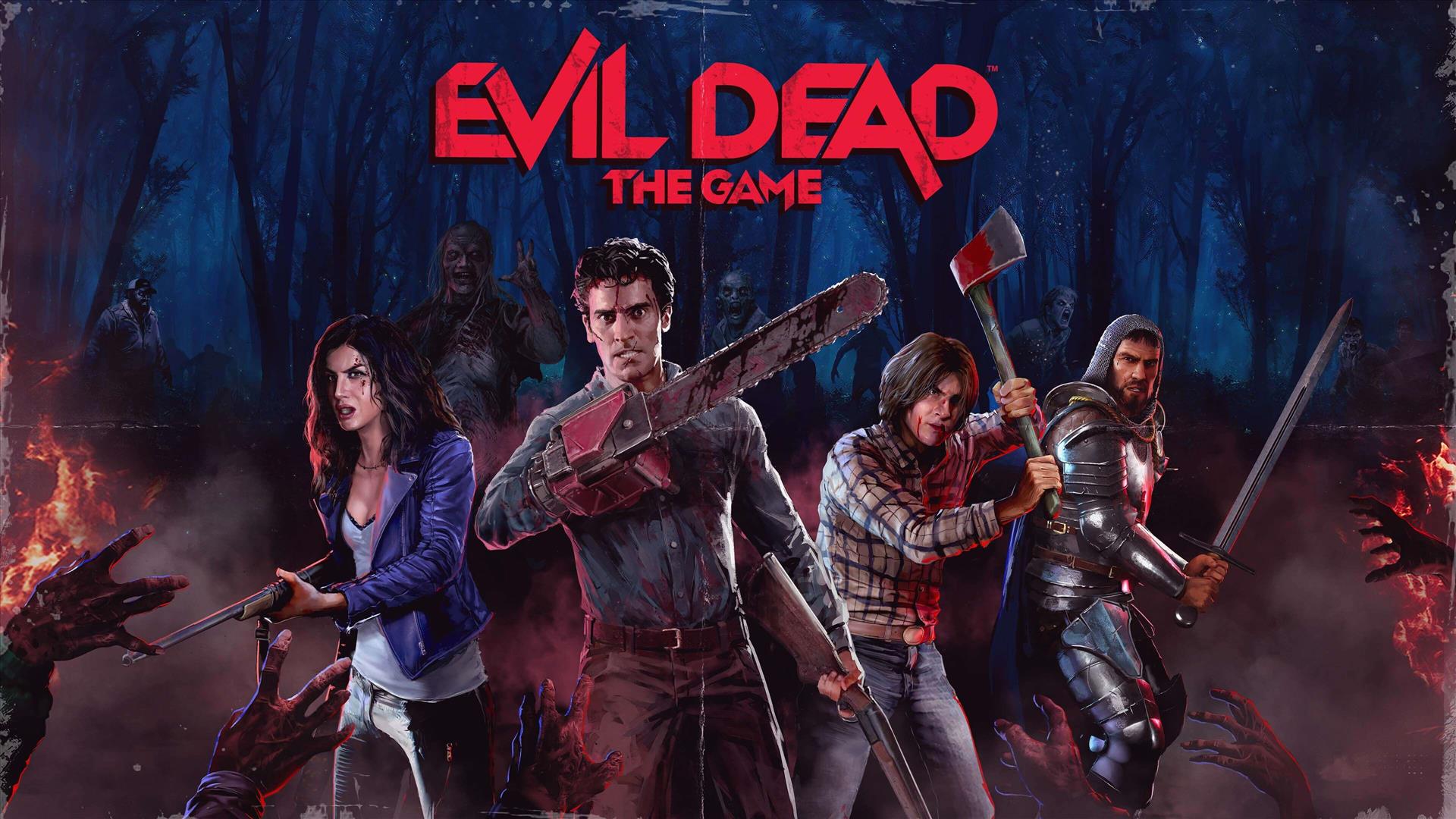 The asymmetrical multiplayer horror genre has been blowing up in the past few years, with popular titles such as Dead by Daylight, Predator: Hunting Grounds, and Friday the 13th leading the way. Now, fans of Sam Raimi and the old school Evil Dead series can rejoice with the release of the newest game from Saber Interactive. Evil Dead: The Game is an asymmetrical multiplayer survival horror experience set in the world of Deadites and the Necronomicon. The game pays homage to all the movies in the series as well as the TV show Ash vs. Evil Dead. It brings together the series' most iconic characters, along with gory guts, vulgar humor, and best of all, Bruce Campbell!

At first glance, Evil Dead: The Game seems to draw many similarities from Dead by Daylight, where a group of four survivors are pitted against the Forces of Darkness, controlled by a fifth player. However, it is an overall different game that introduces some very refreshing mechanics onto its sprawling map. On the survivor side, there are a total of thirteen characters to play and unlock. Coincidence with the number thirteen? I think not! I should also note that this game was released on Friday, the 13th of May (I see you, Saber Interactive). You get characters ranging from Pablo Simon Bolivar and Kelly Maxwell from Ash Vs. Evil Dead to the iconic Ash Williams himself and Henry the Red from Army of Darkness. Each character slots into a class system, either as leader, support, or hunter. On the Forces of Darkness side, there are three demon variants to choose from: warlord, necromancer, and puppeteer. Each demon class introduces different summons and abilities, including empowered possession or increased fear buildup. 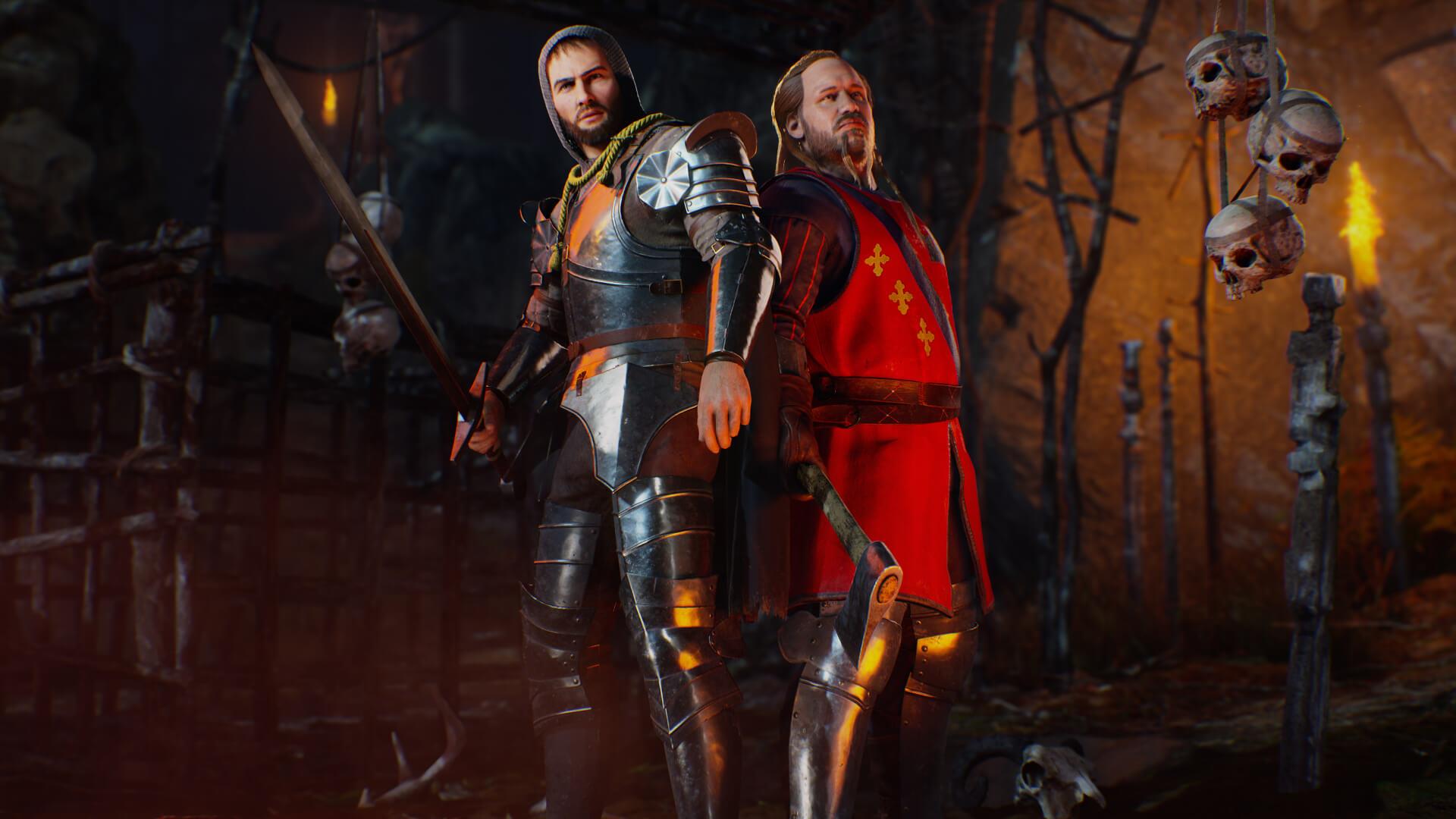 At the beginning of a match, survivors are spawned at a random location, and tasked to find 3 pieces of a map in order to locate the Kandarian dagger and pages of the Necronomicon. After the map is reconstructed, survivors must gather at two highlighted locations and point defend for a period of time. Once that is done and the dagger is acquired, the Dark Ones will reveal themselves on the map and the goal is to use the objects gained to wither away your enemy's health. After that, the only remaining thing to do is to protect the Necronomicon itself in another point defend scenario. If the survivors are able to do all this, then the round ends and they win. The gameplay loop of objectives can be fun and novel at first, but can get very dry and repetitive after a bit. The game definitely needs more maps, objectives, and different modes down the line if it wants to keep up the player base. Matches last between fifteen to thirty minutes depending team communication and skill level.

Many famous locations are present on the map, including “the cabin”, and filled with loot to equip your characters with. You get a melee and ranged weapon, amulets that act like shields, and a special drink called Pink F that grants skill points to be used for the duration of the match. Each character has an active special ability that is representative of their class, like an area of effect heal for all your team members or infinite ammo for yourself. The amount of synergy possible with different team members is staggering and definitely promotes replayability and experimentation. Winning or losing online matches grants experience points to characters that can be used to unlock permanent new skills in a tree. Since every character has their own skill tree, unlocking all skills for all characters can be quite grindy and tedious. It is unfortunate that this game can only be played with an internet connection, even though there is a solo mission mode and solo play with AI. It is also important to note that you only get experience points for online matches only, and not against AI. 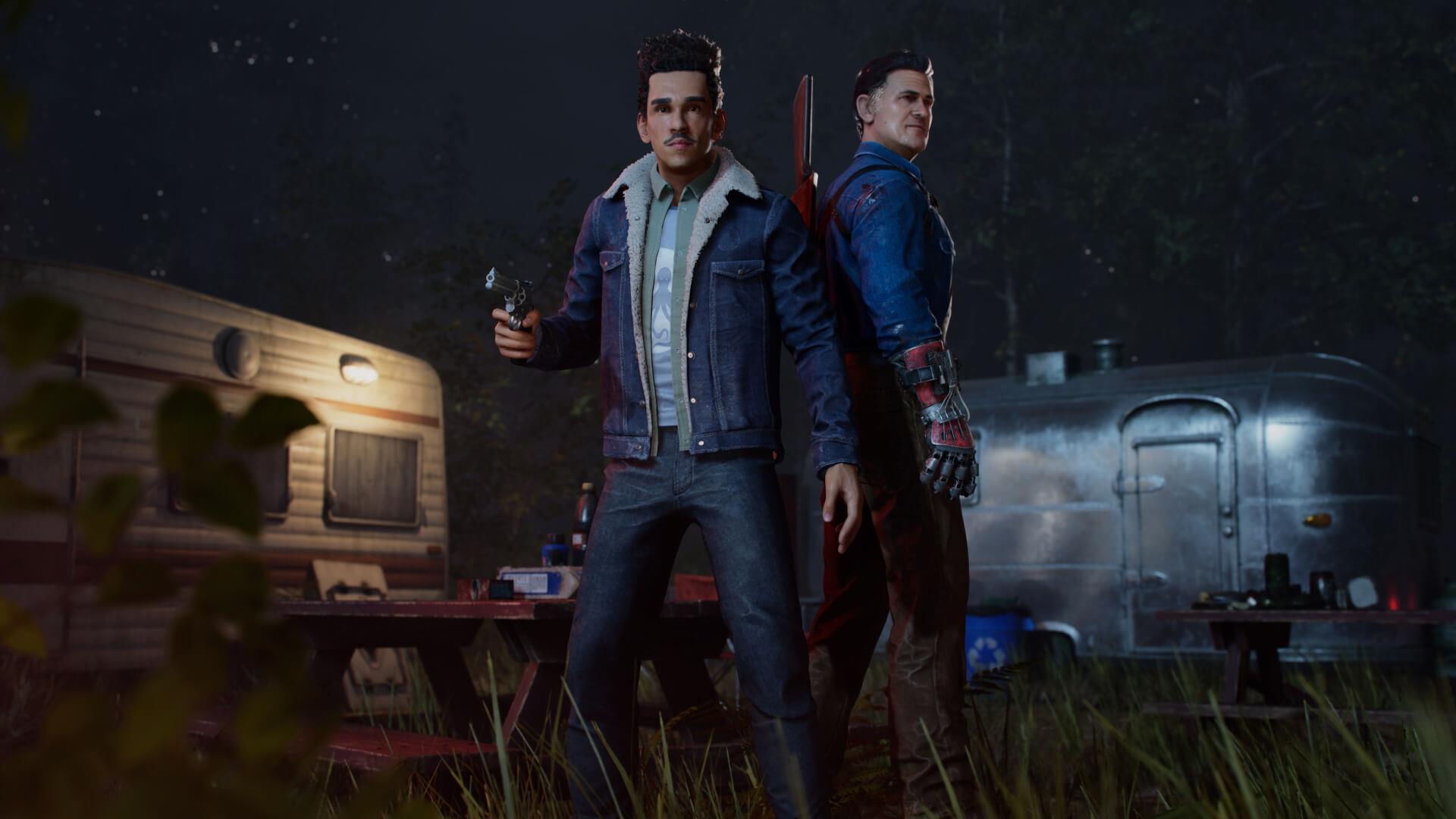 The Forces of Darkness try to do everything in their power to stop the survivors from taking control of the Necronomicon. You spawn as an invisible specter that can’t do much at first, but by collecting demonic energy orbs scattered throughout the map, you gain a whole arsenal of things to do, from placing portals that spawn Deadites, to possessing a tree, to summoning a boss character such as Evil Ash or Henrietta. The longer the survivors take, the stronger the Forces of Darkness gets, so it is in both parties favor to do things as fast as possible. There is a fear mechanic in play for the survivors that continues to increase. Once the fear meter is full, the Demon player can locate the survivor and possess them for a short period of time. This is probably the most fun and most satisfying part of playing as the Demon as you get to wreak havoc and scare the survivors! The only way the fear meter can go down is by creating a fire or light at designated locations and sticking with a friend. This is a great mechanic as it forces the survivors to work together as a team rather than splitting up and getting chewed up by the Forces of Darkness.

Evil Dead: The Game was delayed initially so that the team could include a single player experience as well. While they did deliver on single player options, it isn’t what most people would expect. Mission mode allows you to recreate scenes that happened in the movies such as digging up Linda’s head. These short side missions definitely immerse you into the universe of Evil Dead, but the lack of a solo campaign leaves me disappointed and wanting more. That being said, I am still glad that these snippets of solo play exist, as they are all well crafted and decently difficult! Completing these missions also grant you some hefty rewards, such as new characters and The Knowby Tapes. 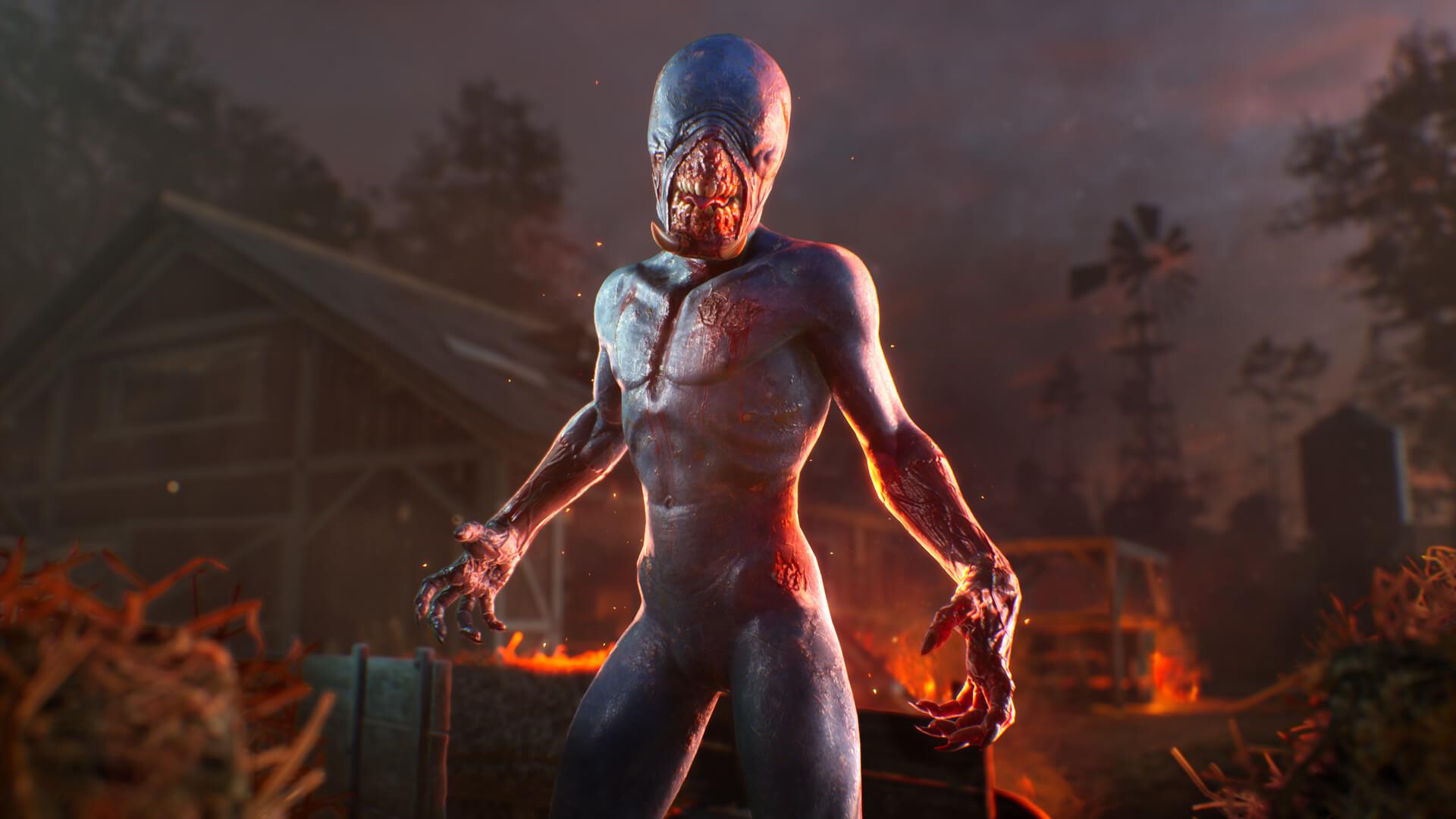 There are some quality life issues that are present in the game, such as no controller or sensitivity remapping or FOV slider. There’s also no difficulty to adjust for the AI when playing solo. Perhaps the most infuriating mechanic is the inability to step onto a small ledge. There’s no jump command and you can only vault over things the game deems valid. Lots of times, I found myself unable to step or jump onto a small elevation bump off the side of a mountain and had to walk all the way across in order to get up. I do appreciate that there is cross play though, so players on PC, Xbox, and PlayStation can play together seamlessly.

Evil Dead: The Game is a groovy blast to play with a group of friends, or even solo. Carving out Deadite brains as Ash Williams with a chainsaw never felt better. It is a huge bummer that no progression can be made when playing against AI and that the game must be played with an internet connection. It definitely shows utmost respect and love for the franchise, especially with the wide cast of characters and the well crafted solo missions. The game desperately needs to add more content down the road if it doesn’t want to end up dead by daylight. But for now, it’s a bloody good time!

Evil Dead: The Game brings a lot to the table within the realm of asymmetrical multiplayer horror experiences, with its cast of iconic characters, locations, and dialogue. It is an absolute blast to play as Ash Williams - voiced by Bruce Campbell himself - against the Forces of Darkness. There's even a solo mission mode that pays homage to famous scenes from the movies and tv series. Unfortunately, there's a slight lack of content due to repetitive objectives, and many quality of life concerns that the developers need to address if they want to prolong the longevity of their passion project.