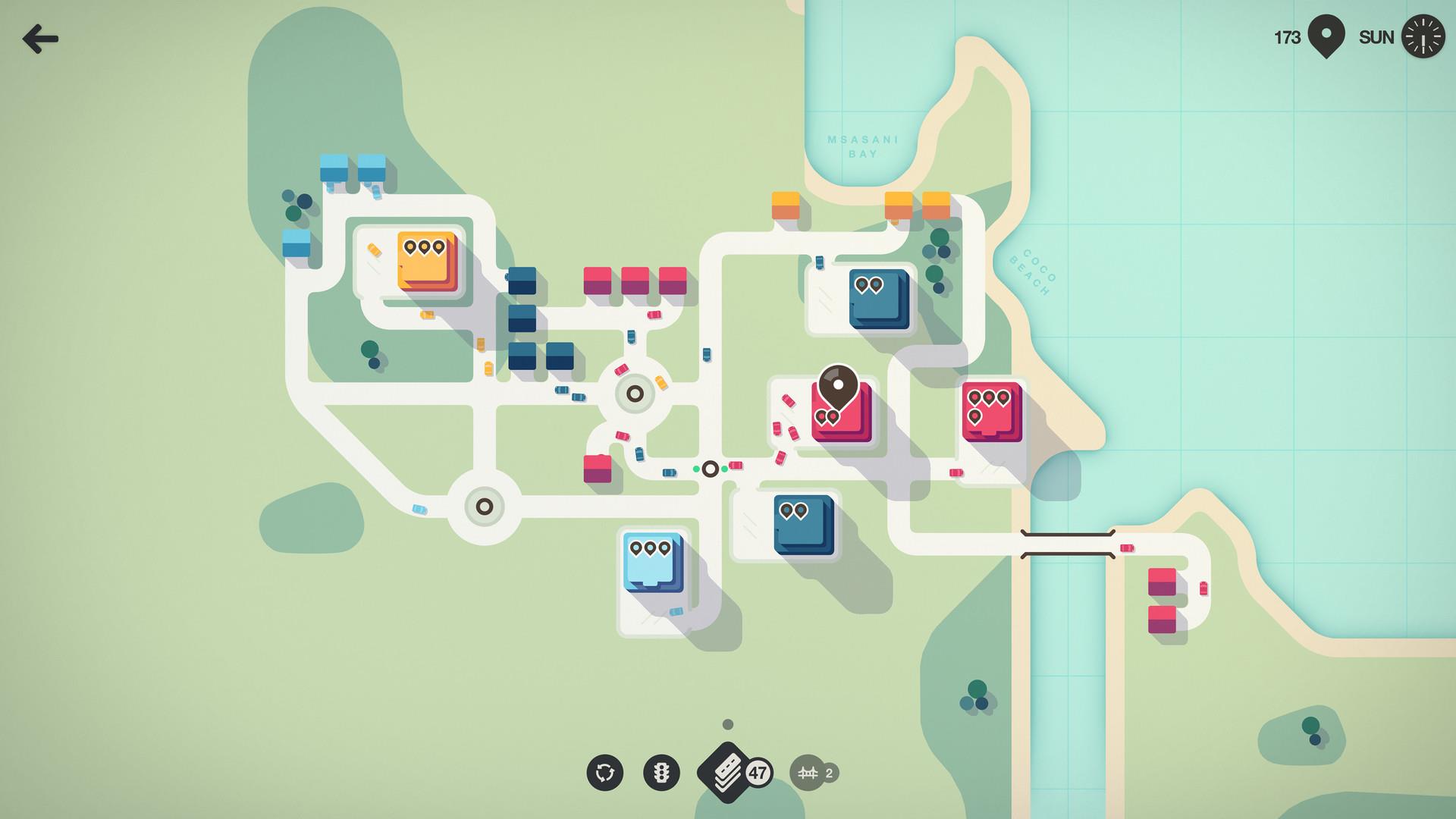 Written by Elliot Hilderbrand on 5/23/2022 for SWI
More On: Mini Motorways

In Mini Motorways you take on the role of a city engineer, planning out the roads for your city. Different colored houses need to shop at their respective shopping buildings, and it’s your job to make that happen. You draw roads, bridges, or freeways from their houses to the places they need to go. Eventually you can unlock round-abouts, stoplights, and other tools to make dealing with the ever growing traffic easier. The game ends when your citizens can no longer travel to those locations in a timely manner. The concept is simple enough. For a console game it is very simple. And that’s my biggest issue. This feels like a glorified mini game. Hell, "Mini" is in the name.

Advancement is made based on the number of completed trips made through your city’s roadways. You typically need around 400 trips to unlock the next city to plan in. Each city is modeled after a real world equivalent, but I could never really tell. Mini Motorways is colorful and vibrant, but it does not really show off the city the level is based on. I guess this city is Los Angeles? It is a basic interpretation at best. That’s not to say it doesn’t work, but you could name this city whatever you wanted and I would believe the developer. The simplistic look helps give off a clean and sharp vibe without feeling cheap or basic. Did I mention the game has a night mode you can turn on at any time? I love it. 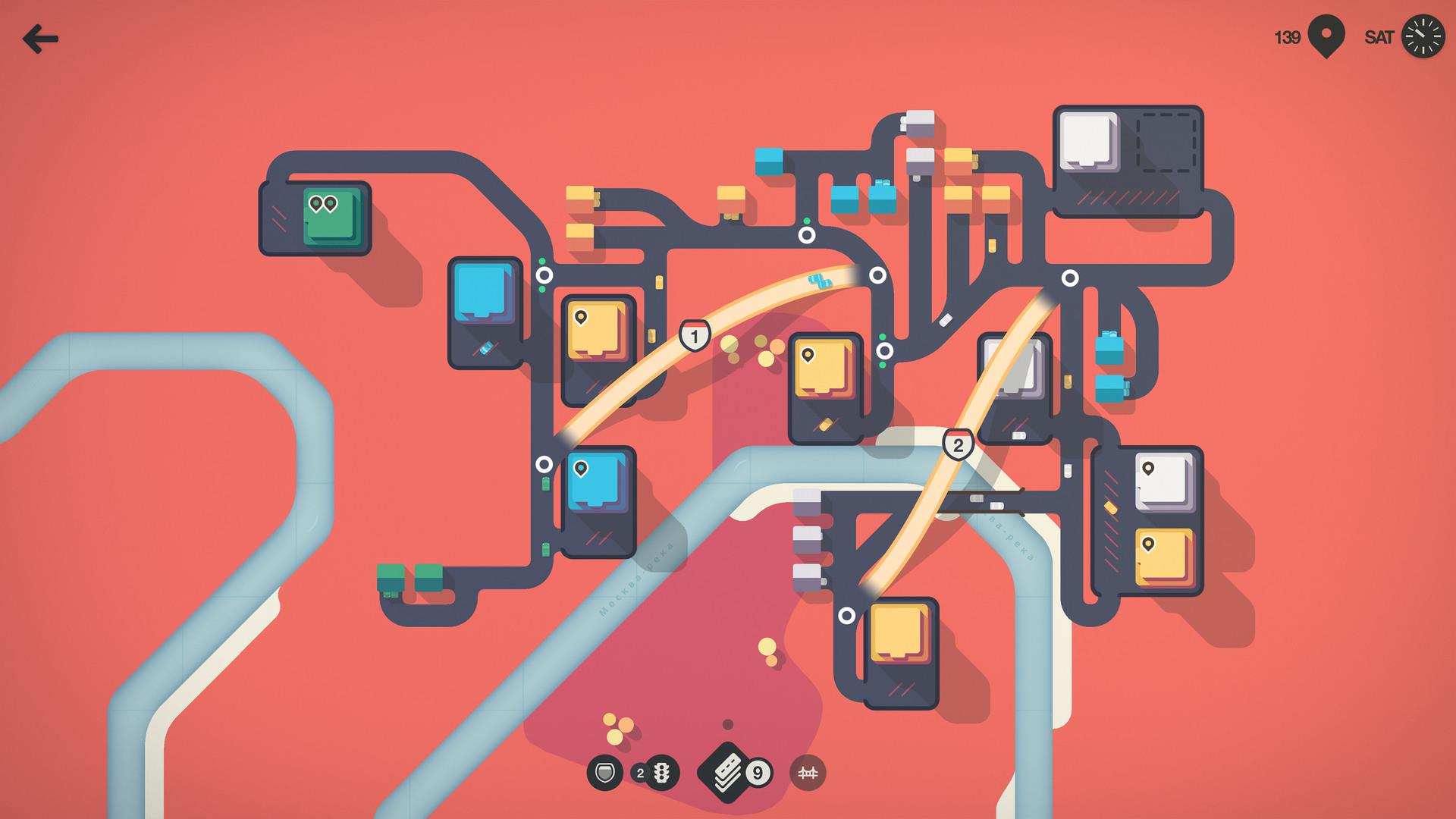 Mini Motorways can be played either docked or in handheld mode. If you truly want a punishment go with docked mode. The game was originally designed for phones, and so the touch screen controls on the Switch work wonders. When you start to add controller support trouble begins to brew. The cursor moves too slow, or too fast. Placing roads the way you want to place them isn’t as easy with a controller, almost painful. I’m actually fine with having to play this in handheld mode. I wish more games would implement more touch screen features on the Switch. Mini Motorways has also made the controls intuitive and easy on the touch screen. Having a game original made for a phone put onto a console is going to have some hiccups. The only gameplay problem I had was the displeasure of having to use a controller when I played docked. 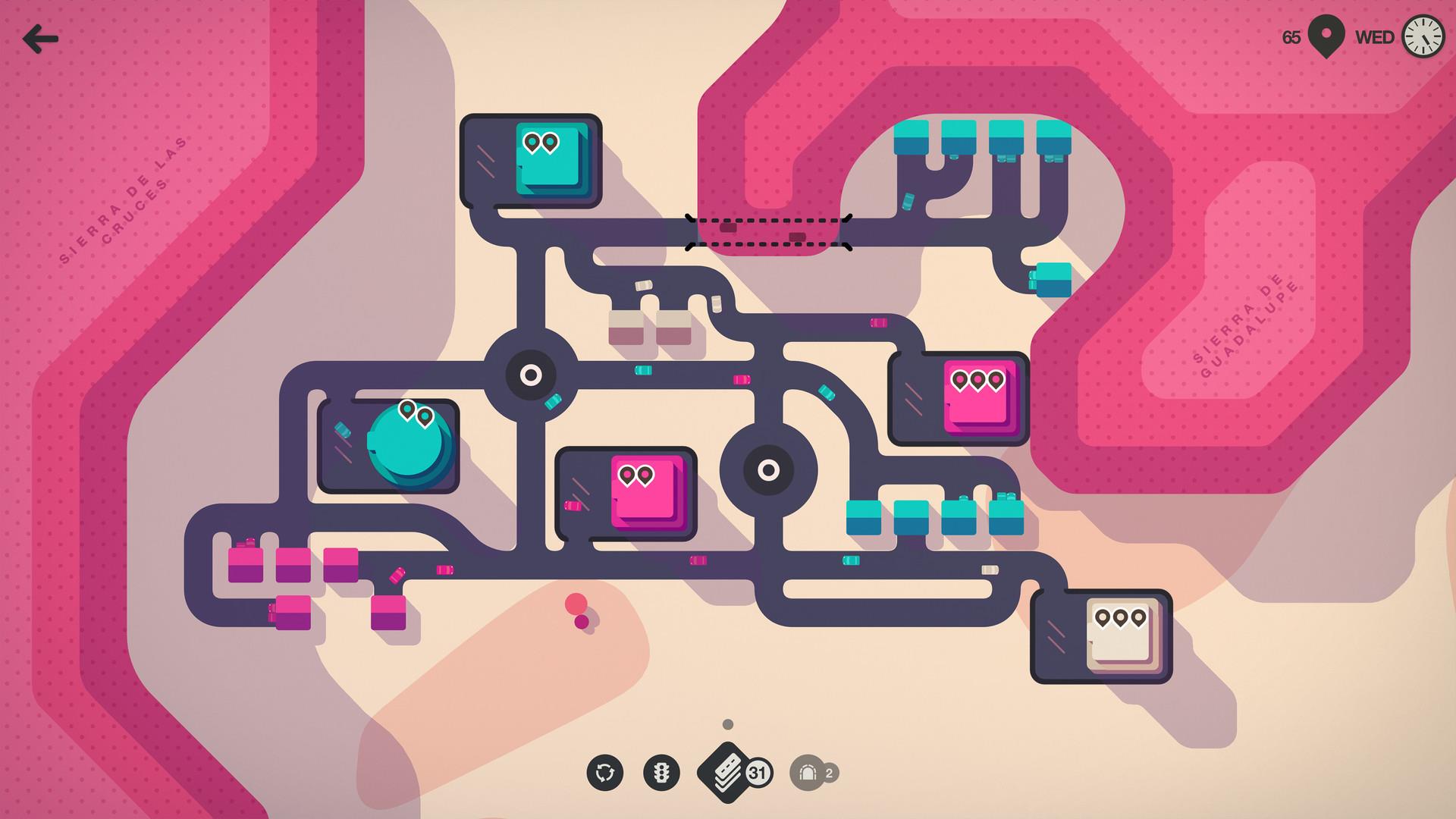 Once you are bored of the endless cycle of Mini Motorways’ main gameplay you can begin to delve into the challenges. The game offers weekly and daily challenges, and this truly saves the game from being a one and done. This is where the long term playing will come from. While I enjoy the base part of Mini Motorways, after an hour I’m ready to either take a break or try a challenge. Challenge modes will limit the amount of roads I can create, or not allow me to use bridges this time. There are enough different challenges that I find myself looking forward to doing the daily one when I get home from work. 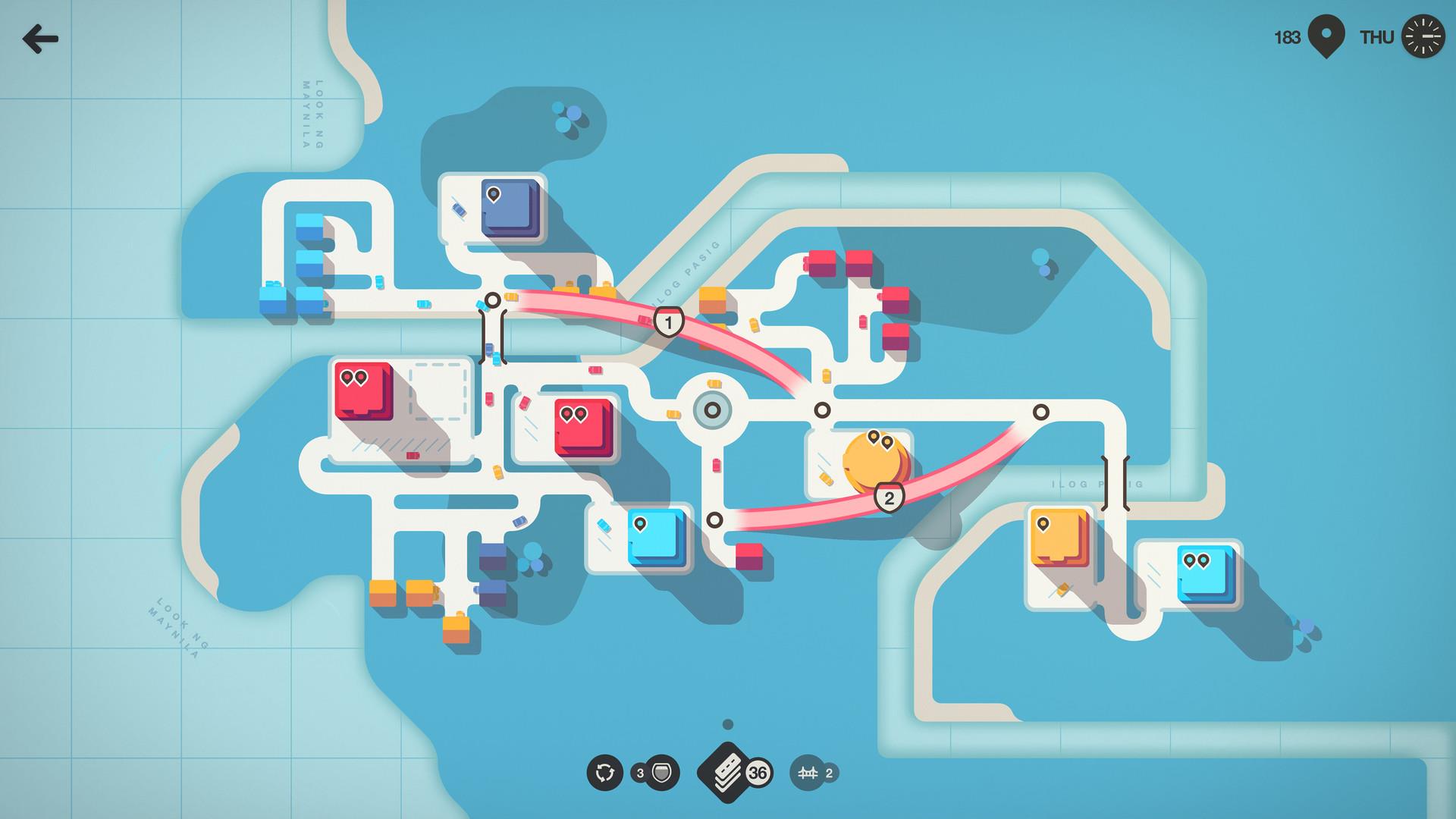 Besides feeling like an overgrown phone app content wise, Mini Motorways suffers from a lack of variety. Some of the maps are so similar that I do not notice much of a difference when playing between them. Sure the river might be on the right on one map, but on the left side the next time. But the basic gameplay stays the same. Or a mountain may block part of the map, but overall it doesn’t have enough variety. Each variation of city isn’t as diverse as I want it to be.

That’s not to say the repetitiveness is bad, in fact I really enjoy my nightly time with the game. It’s become a staple of my nighttime routine. The simple, addictive nature of the game does its job of making me want to play one more time each night, as long as I limit it to two games. I am engaged enough that in the week and a half since starting Mini Motorways I have looked forward to playing a round before bed each night. 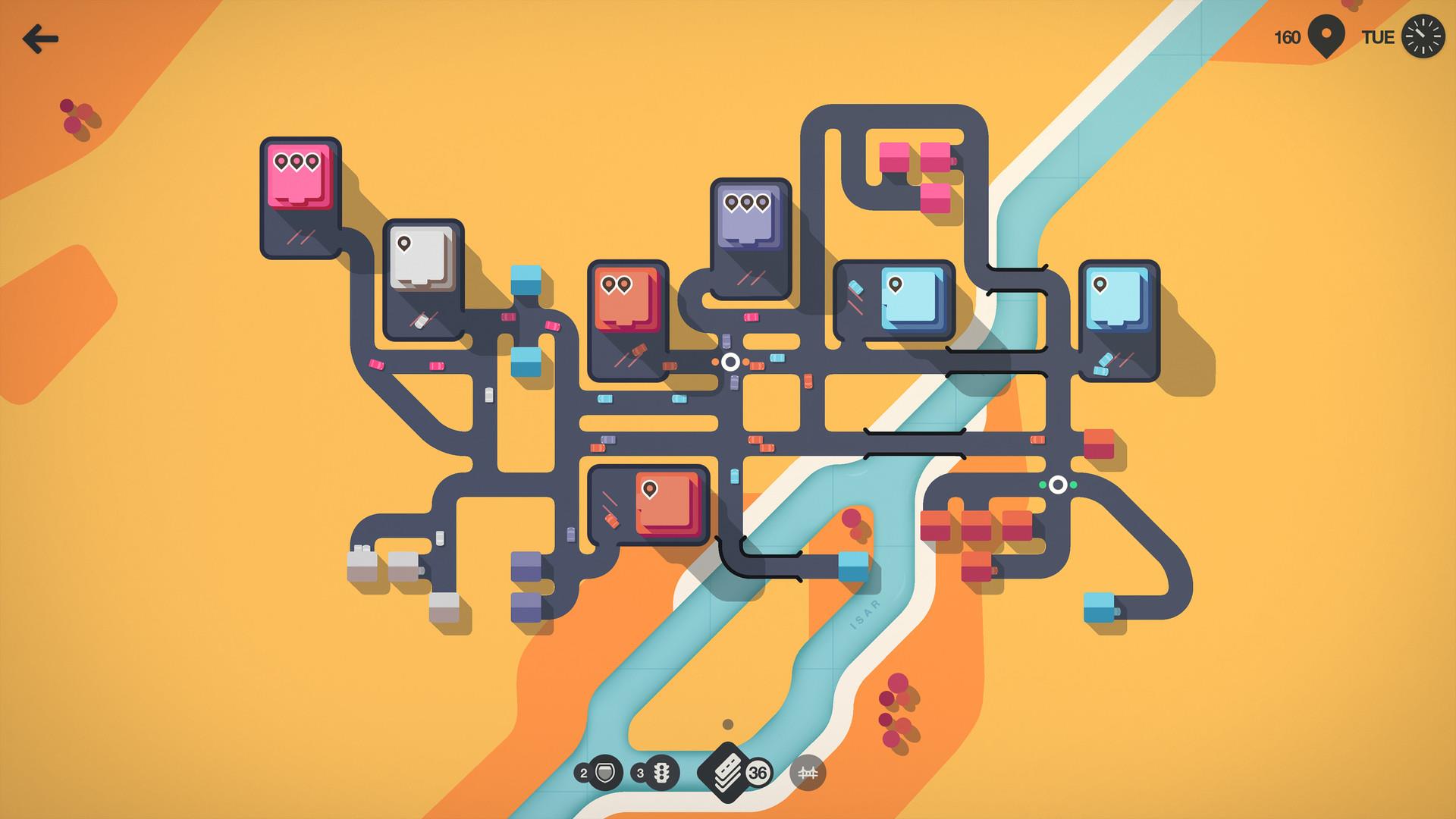 Mini Motorways gives me the same sensation I get from good puzzle games. I begin to see pathways, I start to think about the puzzle when I’m not even playing the game. The addictive nature of Mini Motorways’ puzzle seems simple enough, especially in the first five minutes of a game. But after the five minute mark it begins to feel a bit chaotic.

You can tell the end is near for your city when countdowns at stores begin. Once traffic starts to build up in a couple of spots on the map you really are in trouble. Once one store begins a countdown it is usually followed by a second and then a third almost seconds later. I found it very hard to recover once I had multiple countdowns going at once. I would usually just give up so I could see what my numbers were. Mini Motorways doesn’t tell you how you’re doing until your city has crumbled upon itself. 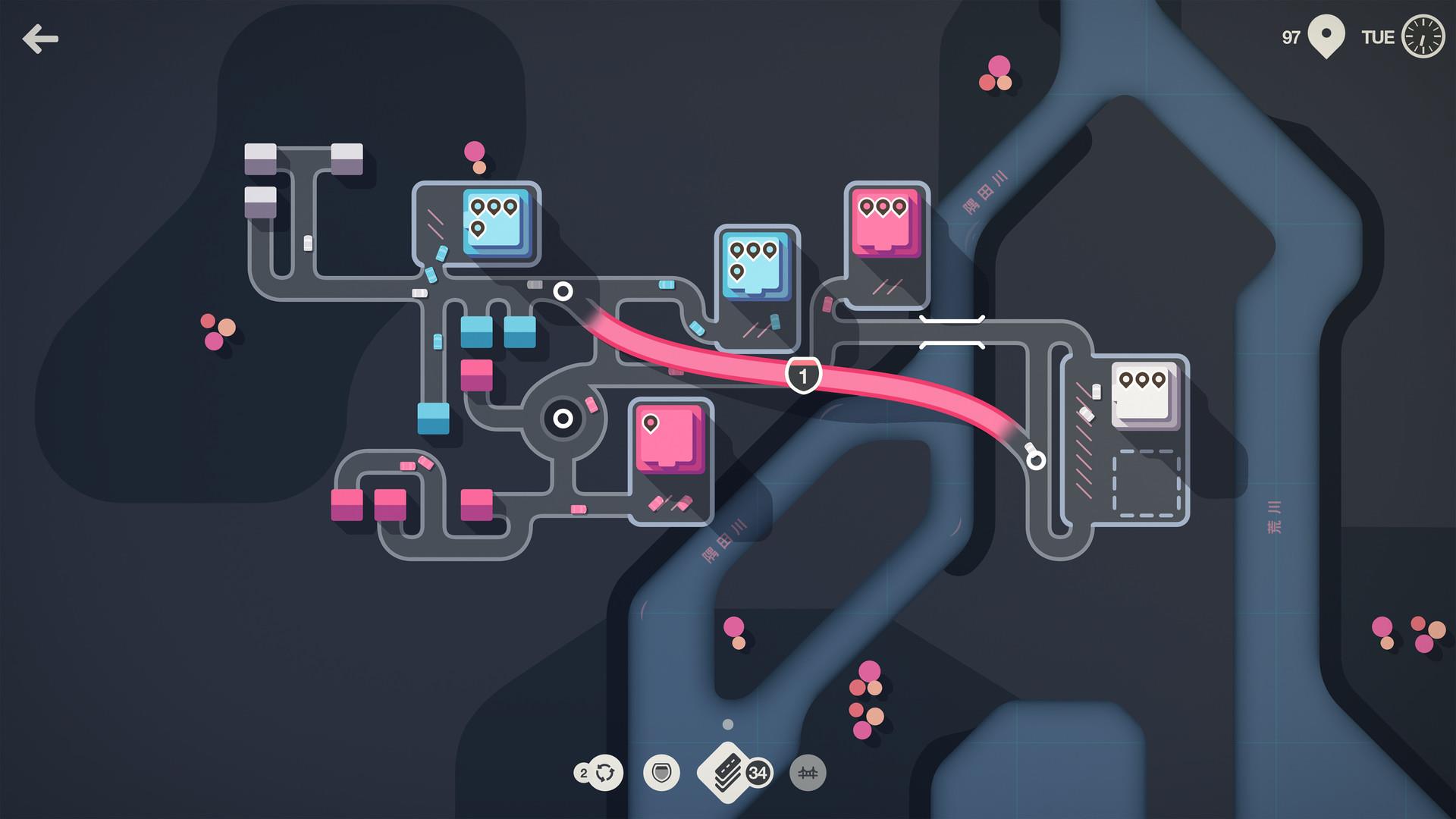 I like the feel and look. I like the puzzle gameplay. But I can't help but feel this is just a high end phone game. Mini Motorways began its life as an Apple Arcade exclusive. There are no micro transactions, no ads in between games. but the hooks are real. While I played some during my first week, by the second week I was playing a game or two at night right before going to bed. Motorways fits in well with someone who enjoys doing something like Wordle or Sudoku on a daily basis. There isn’t much else to say about Mini Motorways. Watch a 30 second clip of the game and you understand almost everything you need to play. Easy to learn, hard to master, and very addictive. Top that off with a clean interface and you’ve got a great 30 minute time waster. But there’s not much depth beyond the puzzles.

Good puzzle games make you see the pathways in your mind before they show up in the game. Mini Motorways does this, and does it well. At its heart, Mini Motorways is about failure. Or your attempt to push failure back as long as possible, just like my parents' marriage. Eventually your city will collapse under its own pressure. But if you need a half hour to kill Mini Motorways is a great choice.