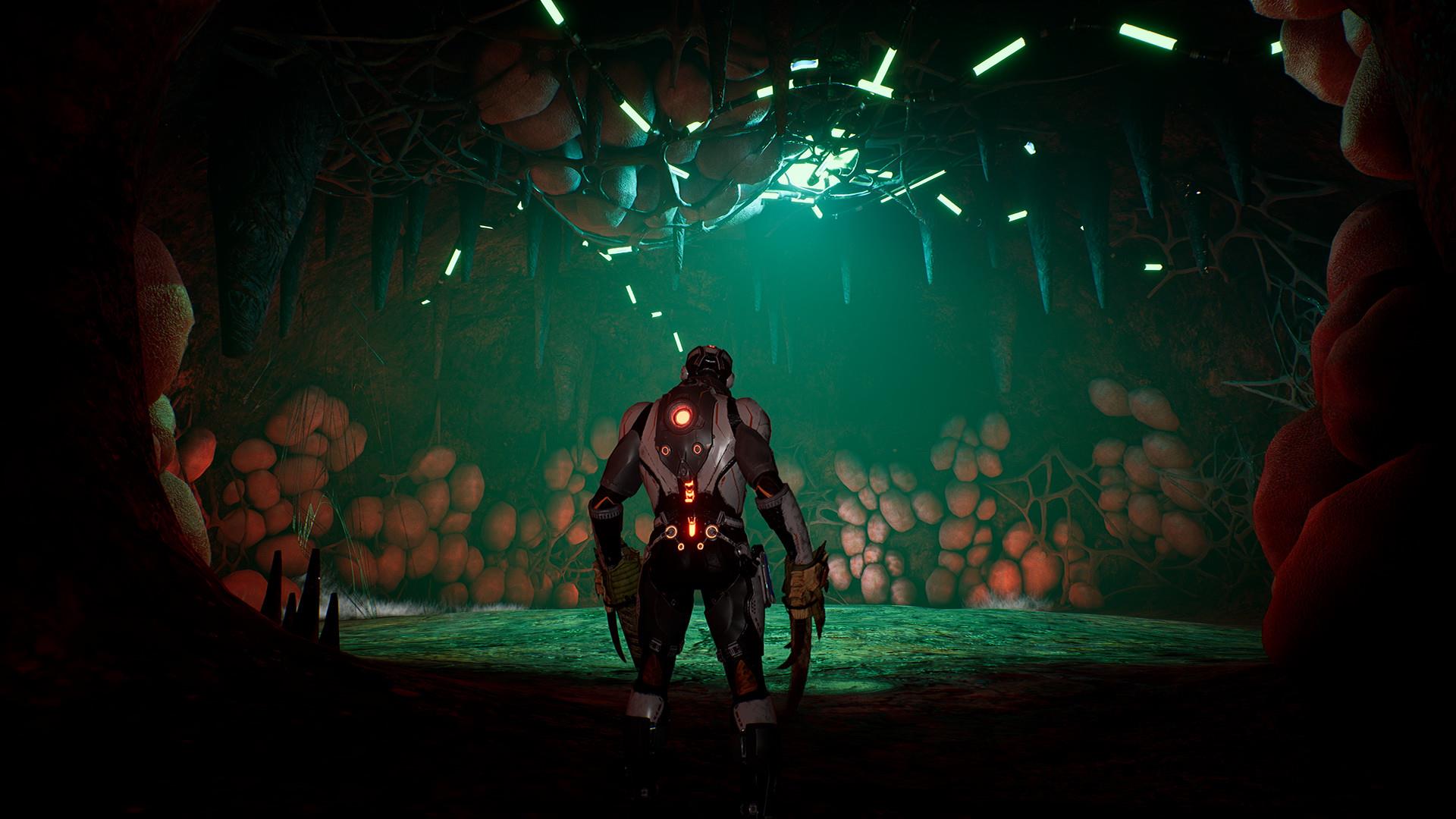 When I previewed the upcoming Souls-like game Dolmen back in December, I was genuinely excited to see what the full version would have to offer. Dolmen, not to be confused with the rock tombs from the Neolithic times, is the debut title from developer Massive Work Studio. It started off as a Kickstarter campaign back in 2018 and is an action role playing game that mixes science fiction with cosmic horrors. On paper, this seems like the perfect game for me, considering I have played every From Software game and am also a huge fan of H.P. Lovecraft. However, after playing the full release build, I was left heavily disappointed with pretty much every aspect of Dolmen, especially considering how the preview demo was pretty much 50% of the full game.

Dolmen is set on an alien planet known as Revion Prime, where various space corporations are trying to stake their claim on a rare resource known as Dolmen crystals. You are hired to venture onto the planet to investigate a distress signal and retrieve said crystals while discovering the planet’s secrets from within. At first glance, the game looks like a combination of Warframe and Dead Space, with armor and weapons that draw inspiration from both franchises. The graphics are decent, but definitely look like something from an earlier era. Cutscenes are limited but voice acting gets the job done. The in-game menu UI is terrible however, with a highlighted border that is extremely hard to see, making it very difficult to navigate.

It’s loud and clear that Dolmen draws most of its gameplay inspirations from the Dark Souls franchise, perhaps a little too much and in all the wrong ways. You have your “souls” in this game, called Nanites, that drop upon death. You have one chance to pick them up again; otherwise they’re lost forever should you die again. You have your typical light and heavy attacks, a dodge roll, and a ranged attack. There is a stamina system in play, but stamina depletes faster than you can count to three. Dodge roll twice and it’s completely gone. The game does introduce some novel elements to differentiate itself from the vanilla formula, like the energy bar. Energy acts sort of like mana, but your ranged attacks spend temporary energy points. You can continue to shoot as long as you wait for the bar to recharge. Healing is instantaneous, but spends permanent energy. The only way to restore energy is to drink a battery potion, which takes an insanely long time. There’s no way to shorten the duration and having to stop in the middle of a boss fight to take 4 seconds to drink a potion, and then pressing a button to heal is just unfeasible.

Combat is the bread and butter for any Souls-like game and is generally the hardest mechanic to implement effectively. Melee combat in Dolmen is atrocious, with clunky and janky animations, stiff character movement, inaccurate hit box detection, and overall unbalance. The game cranks up the difficulty artificially by making low level mobs do massive amounts of damage while you tickle them. Dolmen uses a rock paper scissors system with its three different elemental damage types: fire, ice, and acid. Exploiting these weaknesses is probably your best bet to do more than chip damage to enemies. However, there are several monsters that cannot be effectively countered, so it’s best to avoid them completely. Ironically enough, the ranged combat feels much better than the melee, considering it pretty much bypasses all the hitbox issues and animation concerns. For a game that markets itself as a Souls-like RPG, I definitely did not expect the shooting elements to feel the most fluid. 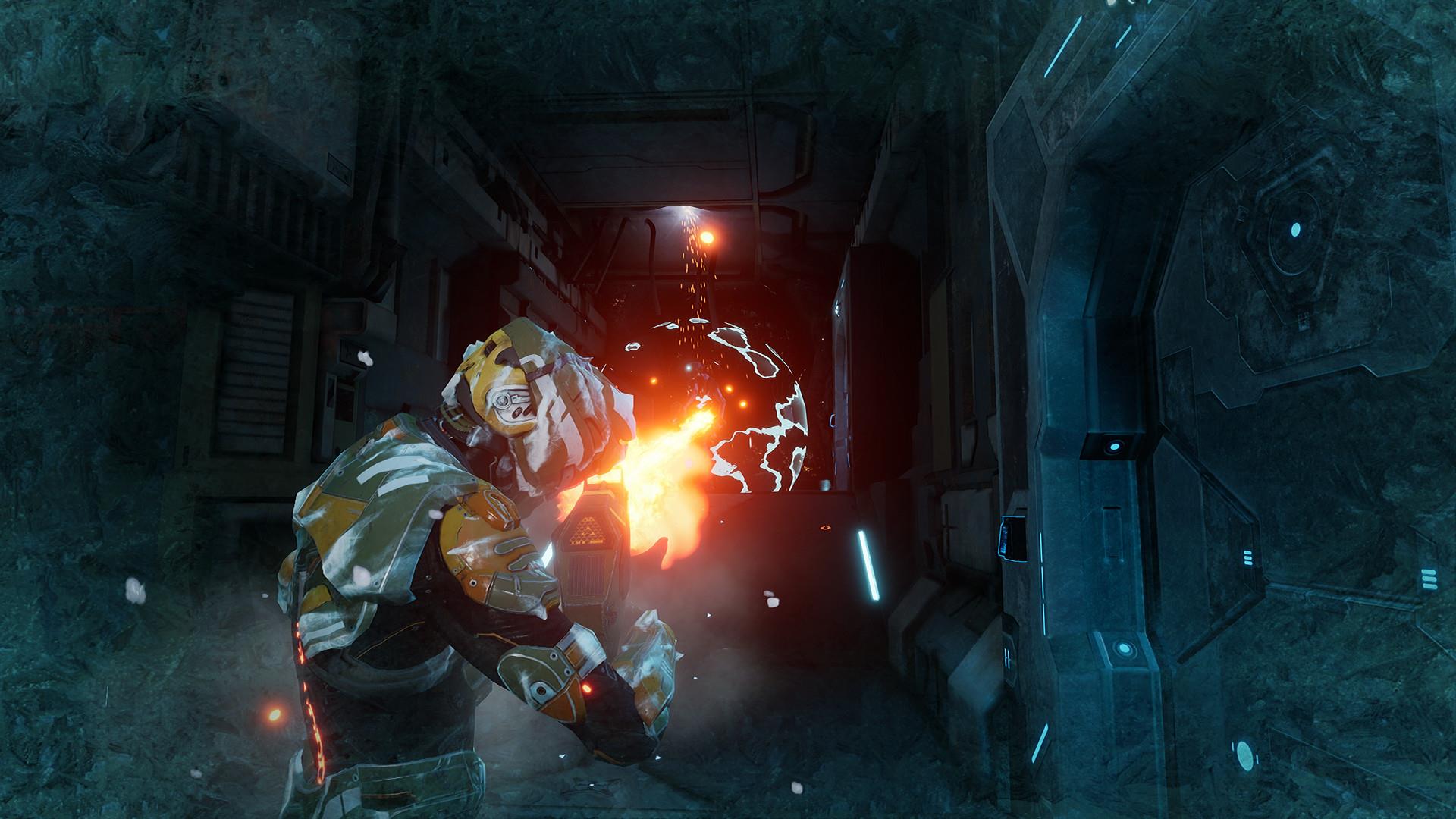 This imbalance is exacerbated during boss encounters, especially during one mid level boss that has the ability to one-shot you. I wouldn’t call myself a “Souls” veteran or pro of any sort, but I would consider myself a half decent player that has had extensive experience with games of this genre. This particular boss proved to be one of the most frustrating experiences of my gaming career. The trek to even get to the boss from the respawn point straight up took 2 minutes of walking. There weren't even any enemies for half the journey, just an empty corridor. The boss itself was a gimmick fight for the first half, but had moves that can one shot you out of thin air. I probably spent over an hour walking back to the boss just to get one shot before finally I got lucky and defeated it.

That’s the thing with the original Dark Souls games. Each death that you face should be one that you learn from. That death should be due to your own mistakes and decisions. This isn’t the case at all with Dolmen. Most, if not all deaths in Dolmen feel cheap, unfair, and completely out of your control. I learned absolutely nothing from my deaths from the aforementioned boss encounter. If anything, it was an absolute waste of my time. 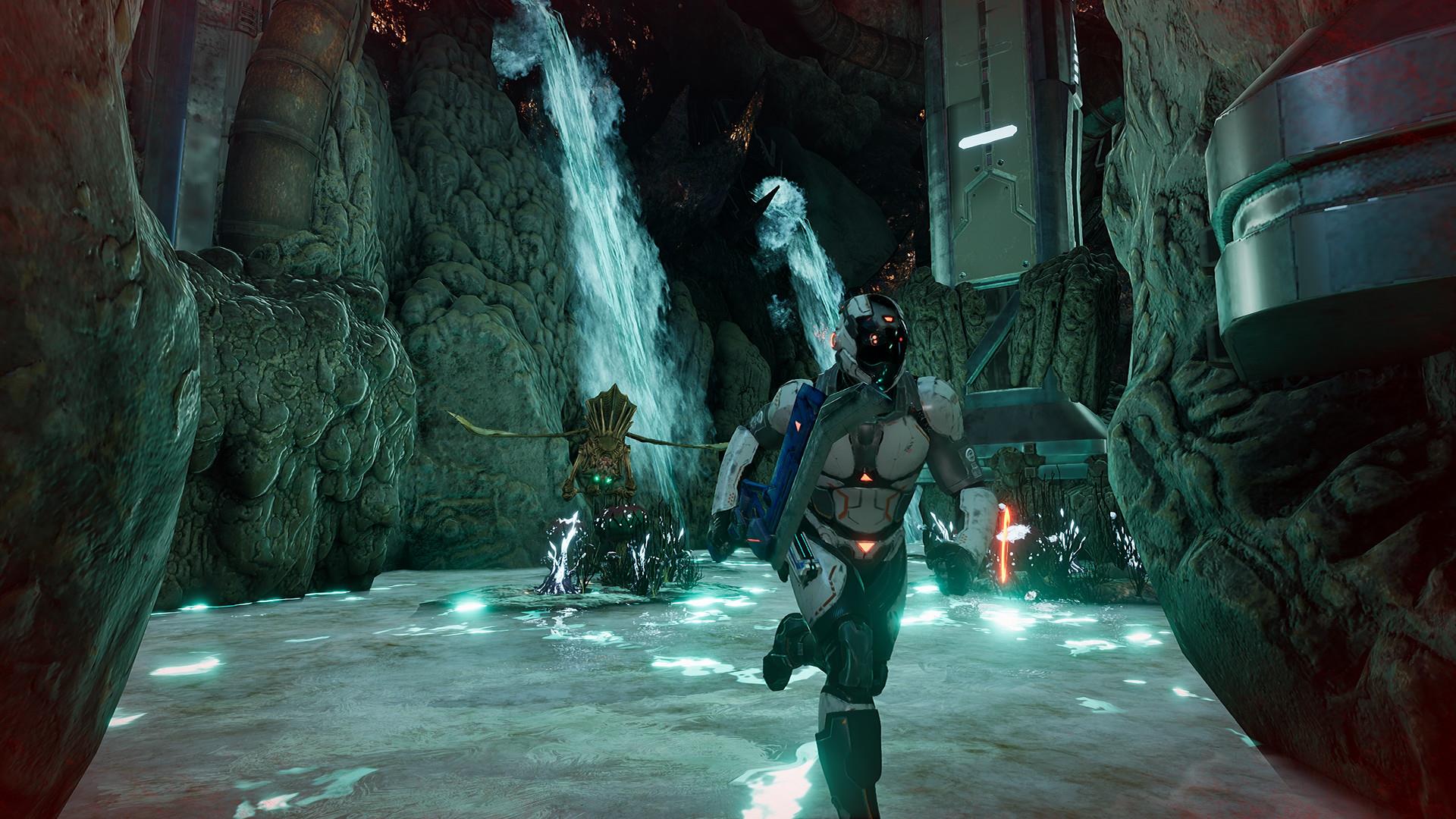 Upgrading your stats is your only way to get stronger, but each level up grants a laughable increase. Farming for Nanites gets extremely grindy due to how little each enemy drops. I’m not sure if this design choice was to pad out the length of the game but it’s one that I cannot look past. There comes a point where farming for levels ceases to be worth the effort due to how unbalanced some enemies and bosses are. You’ll still do chip damage to them and you’ll still die in one hit. There is also no way to respec your character and every time you want to level up you must travel back to your ship via a teleporter. In fact, after beating some bosses, the game drops you into a new area with no teleporter, so you can literally die from regular mobs and lose all the Nanites you got from the previous boss.

The other type of currency you randomly get from drops are Dolmen fragments. These are only used for multiplayer or to respawn bosses. Multiplayer only exists for boss fights and nothing else. However, you also drop and lose your Dolmen fragments when you die, so it’s a very weird design choice to render this currency absolutely useless because if you need help on a boss fight, you can’t summon anyone because your dropped fragments are in the boss room. The only way to get this fragment is to get it as a lucky drop from random enemies. You also need to use these fragments to respawn bosses in order to craft boss weapons. Again, this is unrealistic considering how rare it is to get them and how easy it is to lose them. 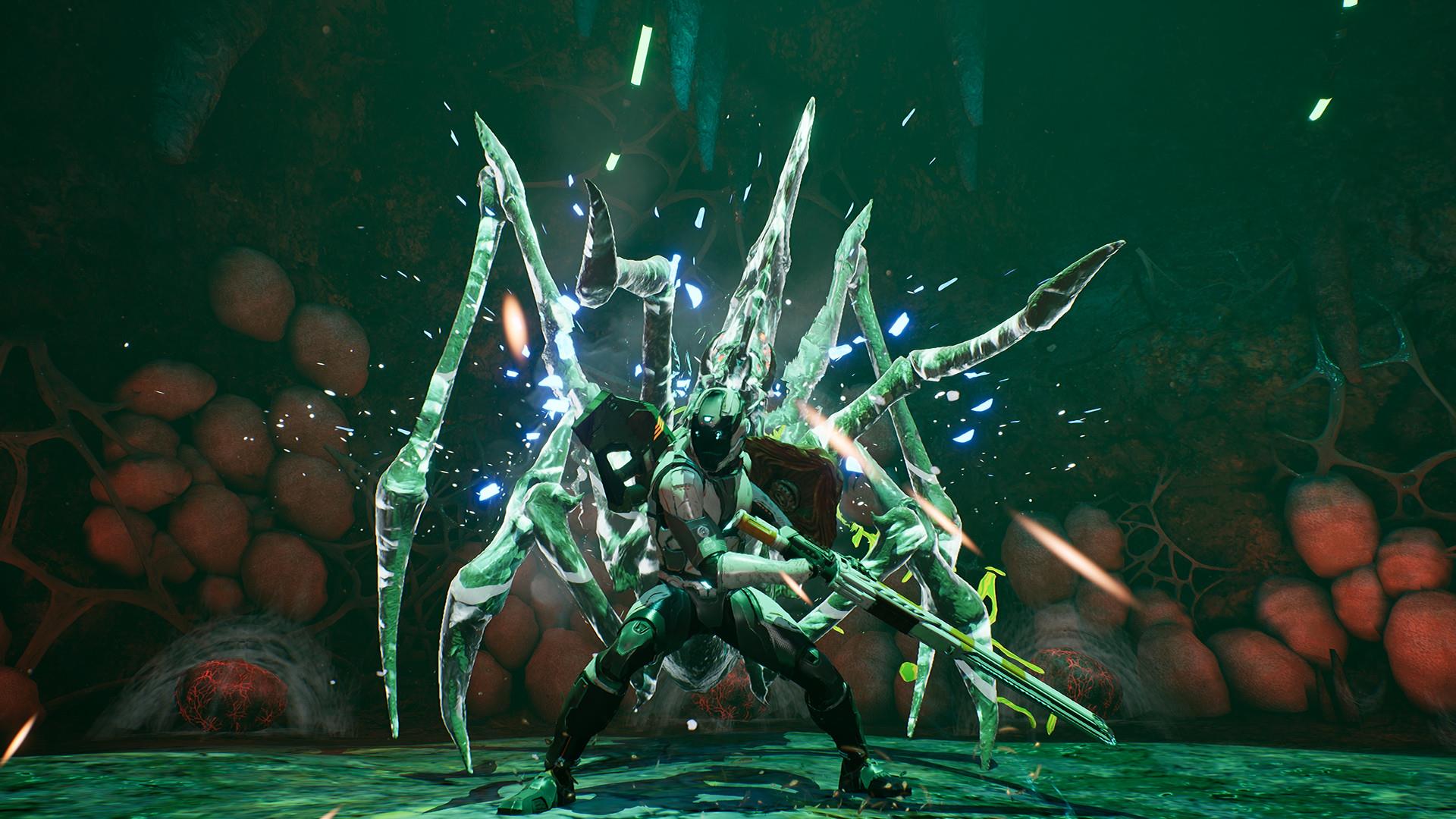 Dolmen is a game that doesn’t respect your time. It’s priced at a hefty $39.99, with a gameplay length of around 10 hours, depending how good you are at the game and no new game plus. The game is split into 3 acts and takes place in various locations on Revion Prime. Level design is mostly linear with very few optional areas to explore. Each area is stretched absurdly long, with some portions that are void of anything, so you just end up running and waiting for your measly stamina to recharge. It boggles my mind to think about how a game that has been in development for the past four years could arrive in this condition.

I had a lot of high expectations for Dolmen, considering the premise and gameplay genre. Unfortunately, it botches just about every aspect of being a Souls-like game. There were many concerns that I could look past in the demo, but are inexcusable in a full release. Not only are the technical mechanics poorly implemented with inaccurate hitbox detection and animations, the artificial difficulty and long spans of nothingness make the game frustrating for all the wrong reasons.