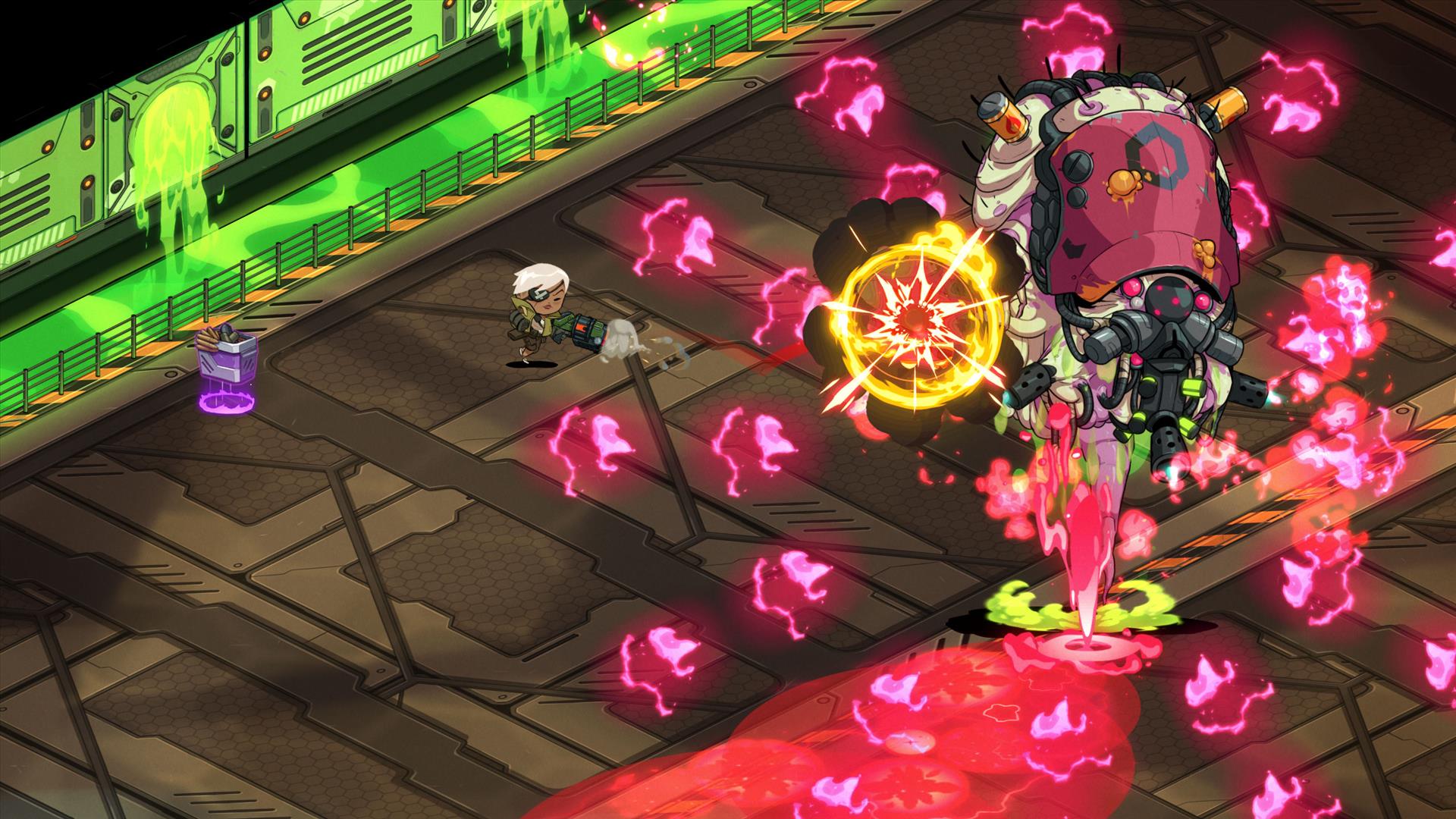 Written by Russell Archey on 5/26/2022 for PC
More On: Wildcat Gun Machine

I seem to be on a bit of a roll lately roguelike games.  Not going to lie, they’re probably my favorite genre next to platformers. Roguelike games tend to be built on a similar formula; go through part of a dungeon, collect new items and equipment to improve yourself and level up from experience, and in some cases die a quick and painful death only to try again with anything you’ve collected staying intact. There are some things I can see being merged with a roguelike game, but you know the one genre I didn’t expect to see? Bullet Hell. Ever wonder what a bullet hell roguelike game would be like? Well, ever the curious type and a sucker for punishment, I decided to see what it would be like by checking out Wildcat Gun Machine. 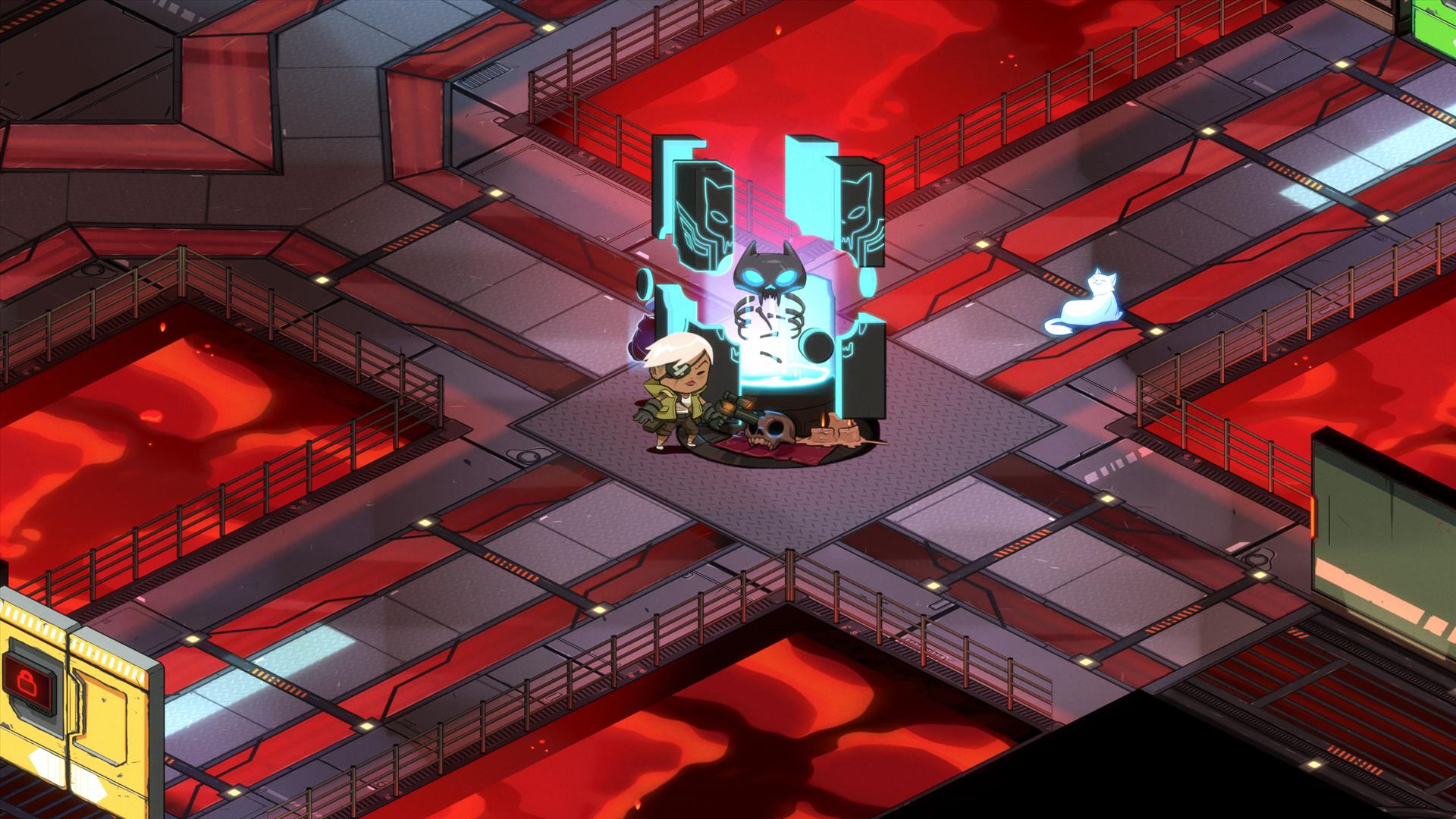 Wildcat Gun Machine doesn’t really have much of a story; you just start the game inside a labyrinth of sorts that looks like a laboratory with several branching paths. Inside this starting room is a large capsule that serves as the Act’s checkpoint and a giant door that looks like it’s covered with something that’s preventing it from opening. You can look at the Act’s map; when you do you’ll see a lot of paths and rooms you can go through, but only certain ones are able to be traversed to start with. The rest require you to find a few colored keys before you can open them up. A couple of rooms in the Act will have a boss you have to fight - defeating them will partially clear up the door in the central room.  Once the door is fully cleared you can enter it and face off against the main boss of the Act. 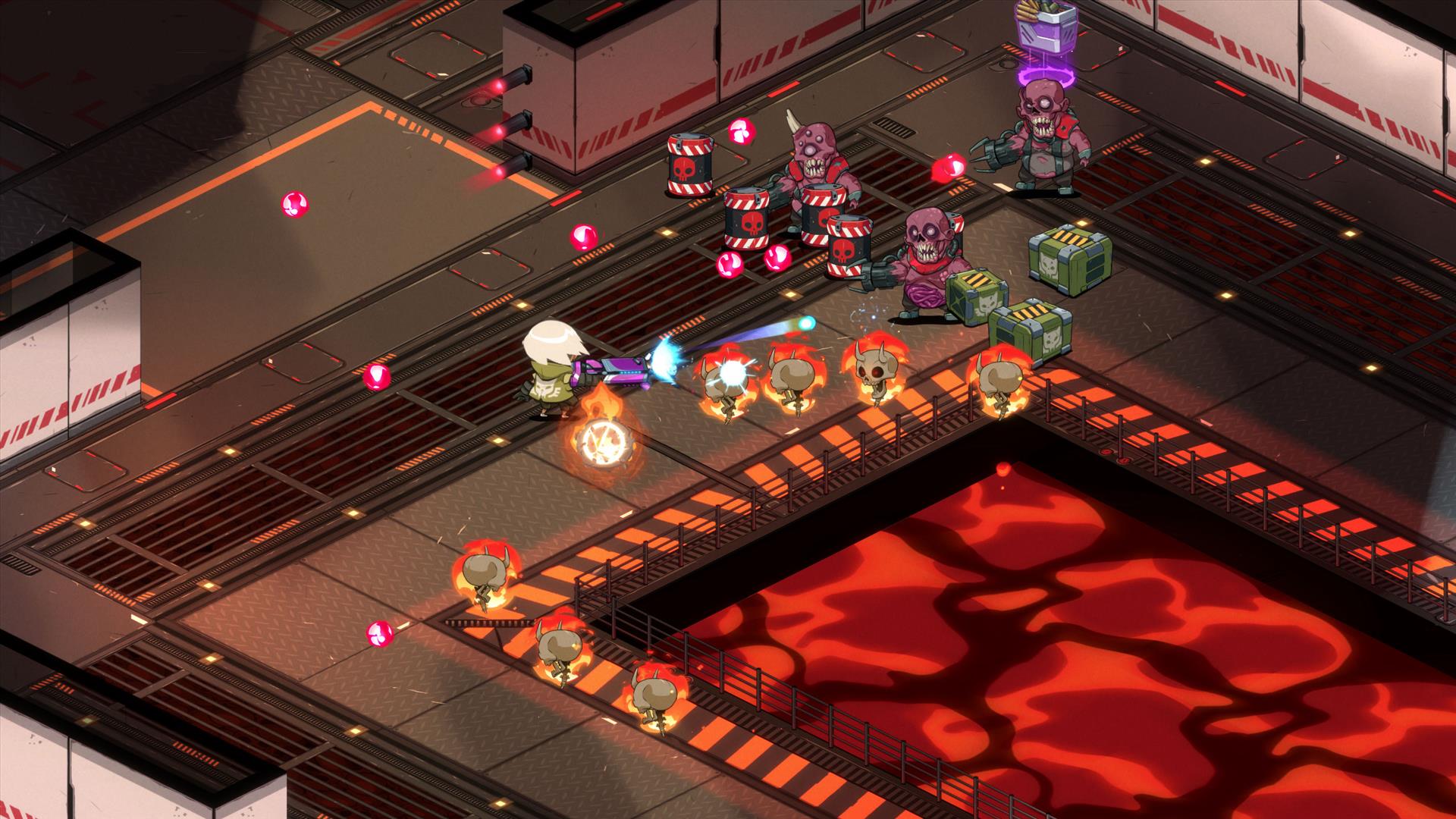 That giant capsule in the central room is your checkpoint, as well as a shop to purchase and equip new weapons. As you defeat enemies you’ll collect bones which act as currency. You can spend those bones at the checkpoint to purchase new primary weapons as well as upgrades to your other abilities. Not too far into the game you’ll gain dash and grenade abilities that both have a cool down period. The upgrades you can purchase can improve their effectiveness, reduce their cool down, and more. You can also purchase extra lives which can come in handy later. Once you’ve done your shopping you can then equip yourself with any primary weapon you’ve purchased and any secondary weapon you’ve found and unlocked. 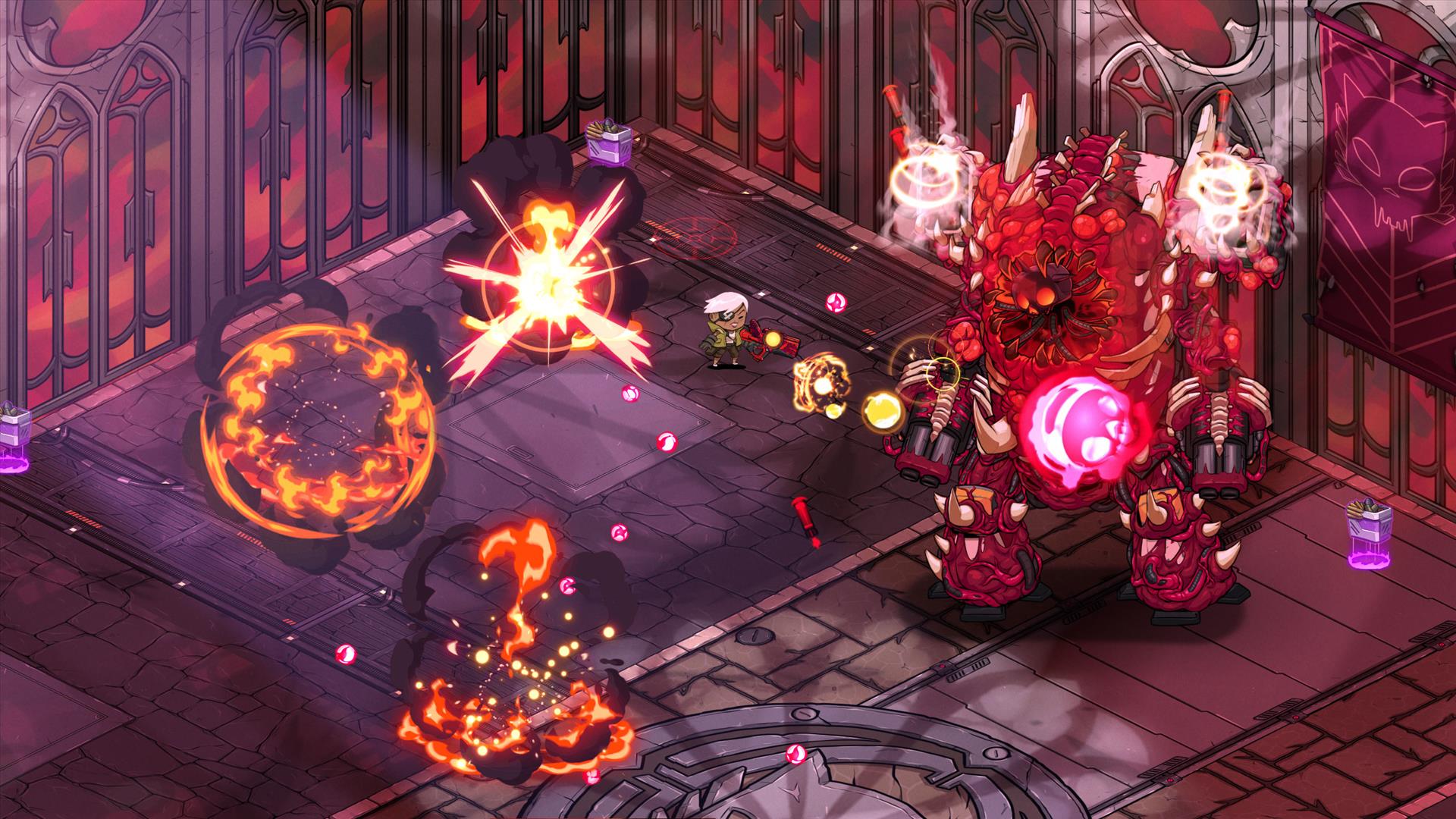 The weapons themselves aren’t terribly bad. Keep in mind that this is a bullet hell-ish game so don’t be surprised if you’re not one-shotting everything in sight as you weave in and out of bullets. That said, the primary weapons aren’t bad, but not really great. As you progress, you’ll unlock more you can purchase and they each have their own properties and power. The gun that can pierce through enemies might not be nearly as powerful as one that shoots homing bullets regardless of where you’re aiming. Purchasing the gun with the most power isn’t necessarily the best option if you’re not fond of the way it fires. While you can see a description of what each gun does before you buy it, it’s a lot different when you see it in action. I’ve purchased a couple that I immediately wished I could get a refund. The secondary weapons you find are a different story. They have limited ammo and some rooms have ammo pickups for them, so feel free to experiment with these (ammo also refills at the checkpoint). The secondary weapons are definitely more effective than the primary pistols, which they should be, but at times it feels like the pistols could have been at least a little bit better. 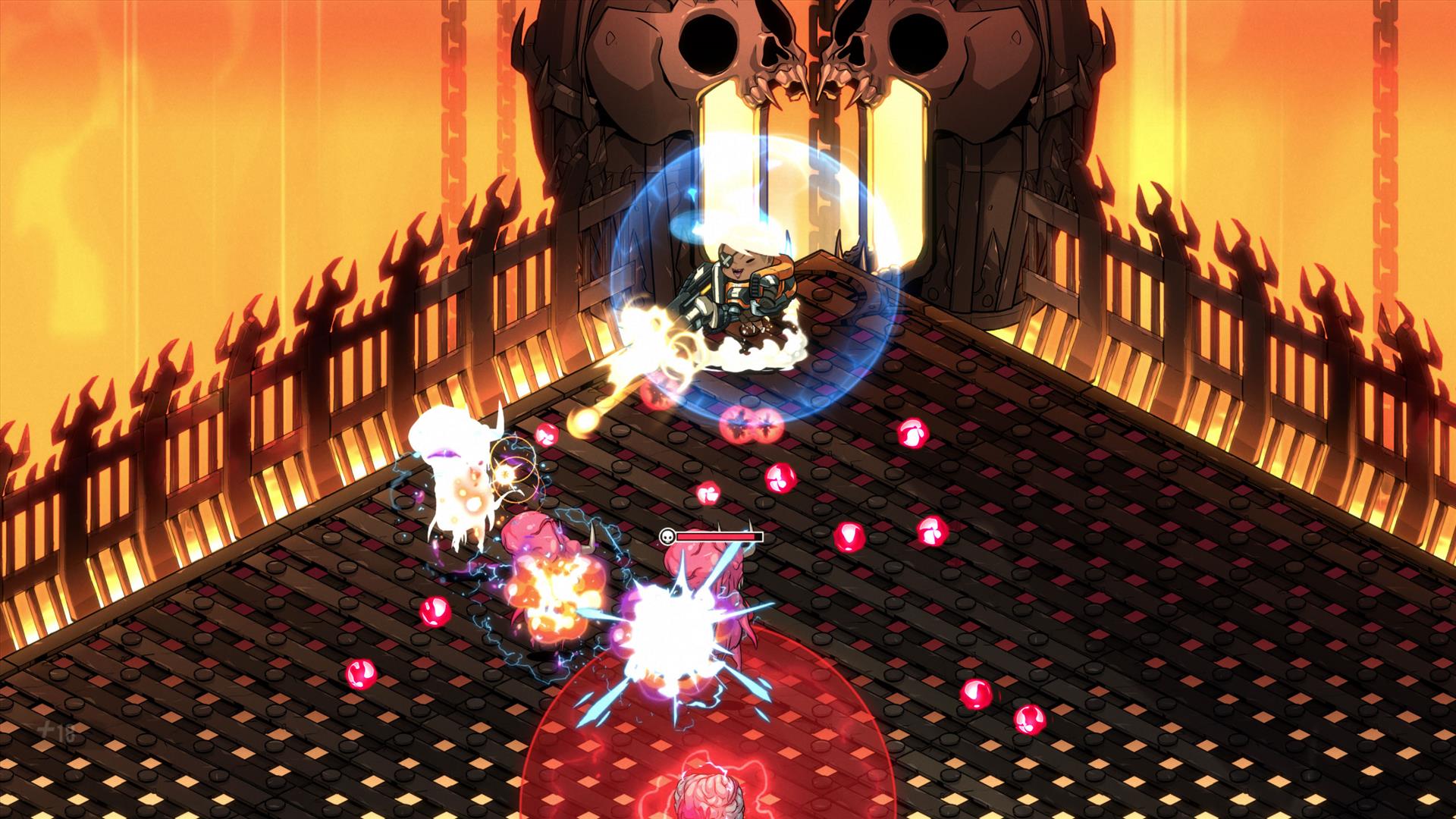 As you proceed through each Act you’ll come across plenty of rooms that will lock as soon as you enter before filling up with enemies, typically a few waves. You must clear out each wave before the doors will open back up. While you have a radar you can use while exploring, it goes away during combat, which is kind of annoying as you can’t see where enemies are until you start moving around the room. Some rooms will contain health, ammo pickups, and shields (you can carry three). In addition to your two weapons you’ll see a gauge start to fill up as you defeat enemies. When full you can activate the Gun Machine which lets you become invincible and mow down enemies in a barrage of bullets for a limited time. Other power-ups are available that will give you temporary buffs or abilities, but the downside is that you really have no indication when they will run out, so you might have a bit of temporary invincibility for a moment and then suddenly you’re taking damage like there’s no tomorrow because you didn’t know your invincibility ran out. 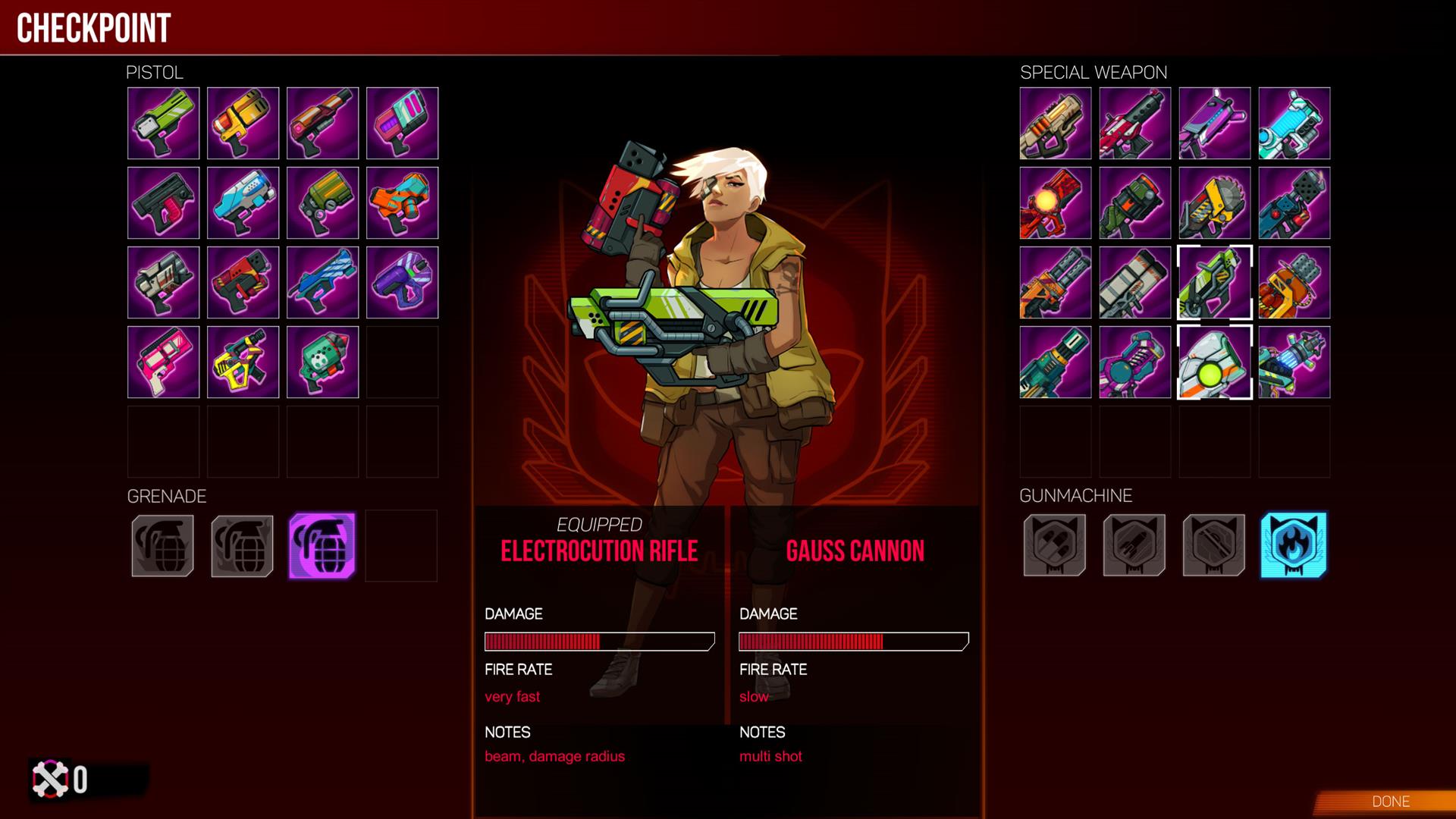 If you happen to take too much damage you’ll die, and what happens next kind of depends on if you purchased any extra lives. If you did, you can use one to restart from the room you died in, though you’ll have to refight any enemies in the room. If you choose not to use an extra life or don’t have any, you’ll restart from the checkpoint and basically lose any progress since the last time you were there. That sounds reasonable enough, except for a couple of things. First, visiting a checkpiont refreshes any extra lives you purchased, so if you had two, used one, and then after dying again decided to just go back to the checkpoint, you’re refreshed to two extra lives. In addition, since the checkpoint is kind of in the center of the map, you’re never really too far away from it at any time. A couple of rooms also have teleporters that warp you back to the checkpoint, so you can basically clear a couple of rooms and go back to the checkpoint. That way when you die you’re not losing very much progress, if any. 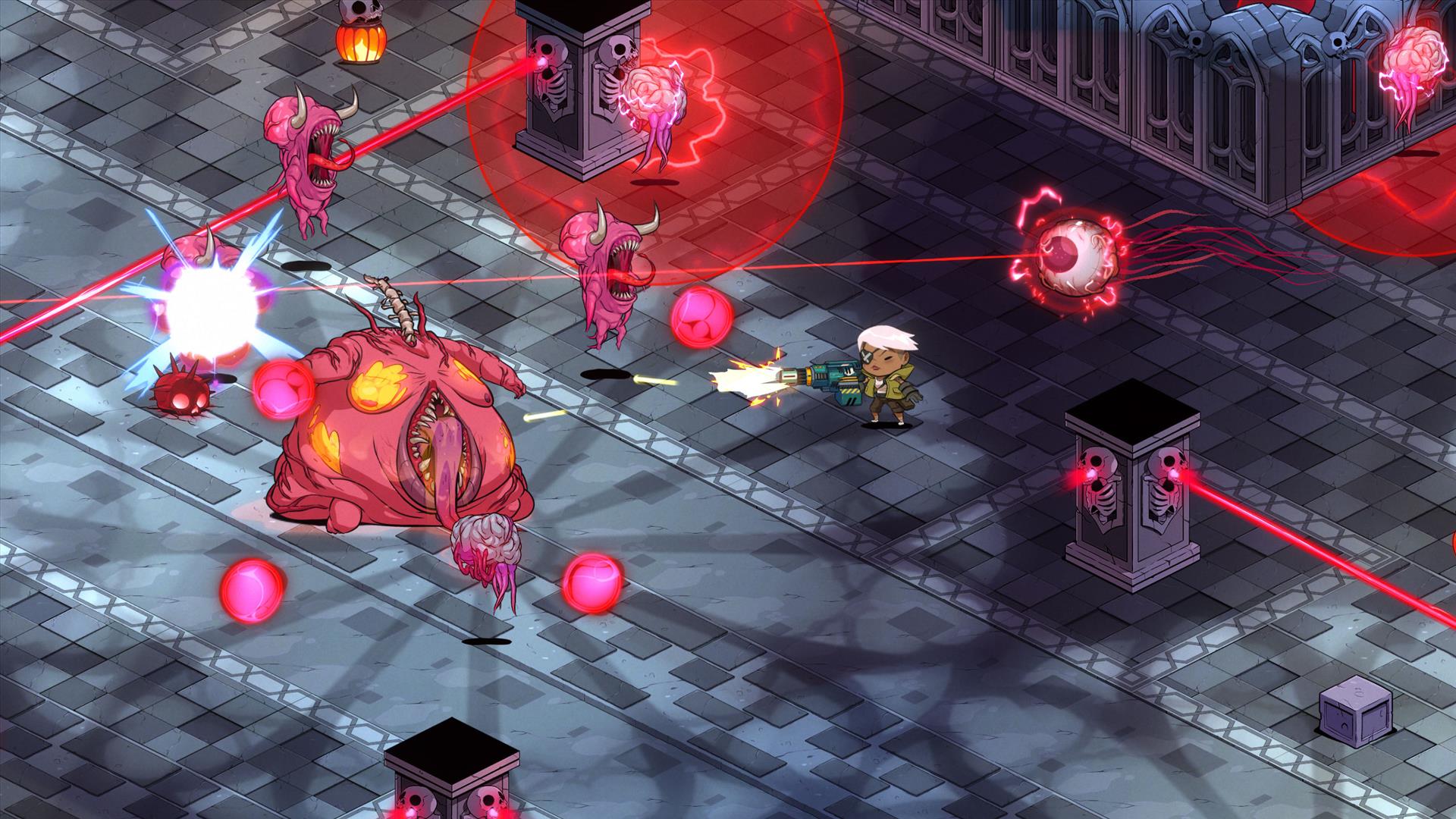 While I did enjoy my time with Wildcat Gun Machine, I didn’t really get much of a roguelike feel from it. The game felt much more like a bullet-hell title than a roguelike, especially with the lack of much of a story. The difficulty can ramp up later on but a lot of it is mitigated by having the checkpoint never be too far away. In my playthrough I didn’t even die until I got to the Act boss which did take me a few tries to beat, including one instance where I was glitched out of bounds (fair warning, do not try to get behind him). Beyond that though Wildcat Gun Machine was enjoyable, but it didn’t feel like it brought anything new to the table for roguelikes other than mixing in some bullet hell mechanics. The game looks great and I do enjoy the soundtrack, but a lot of the time I just felt like I was moving from room to room, taking out some enemies, moving to the next room, and so on. If you have fifteen dollars to spare, I’d say check it out if you want to see what you get when you mix a roguelike-ish game with bullet hell mechanics. Otherwise I’d wait for it to go on sale a bit.

Wildcat Gun Machine is an interesting take on roguelike and bullet hell games, but the roguelike aspects feel a bit lacking, especially the story. The game looks and sounds great, but a lot of the time I kind of felt like I was just going room to room, fighting enemies, and then going back to the checkpoint, which mitigates a bit of the challenge. Still, Wildcat Gun Machine is enjoyable, but if you’re specifically looking for a roguelike game to keep you busy, you might find things a bit lacking here.