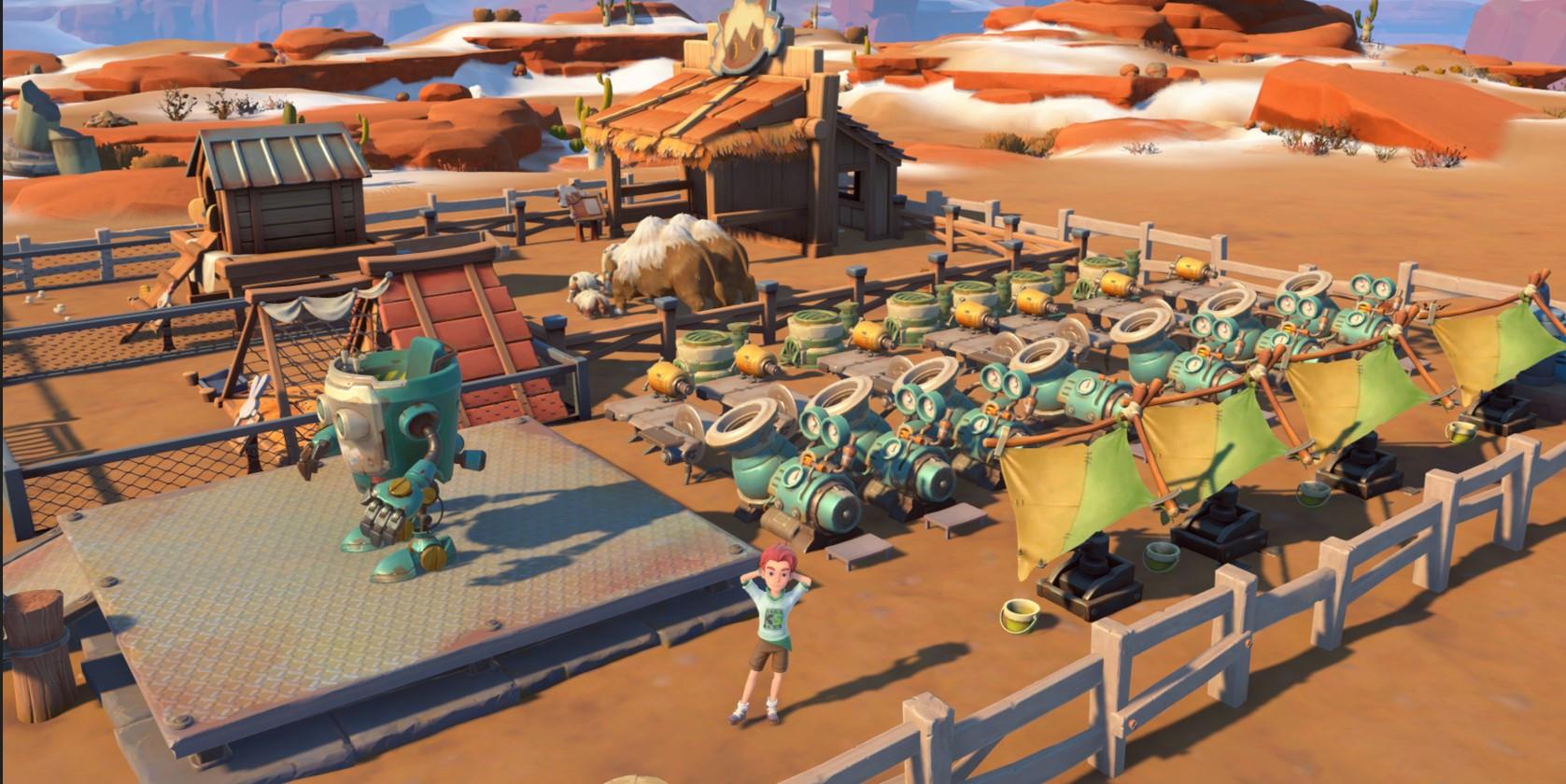 My Time at Sandrock

I stumbled upon My Time at Portia, the first game in the "My Time at" franchise, almost by accident. I'm fairly certain I got the game in a Humble Bundle, or through one of the other various means that cause games to pile up in my library with me being only half aware of it. I'm not certain what got me to try Portia, but one day I did. I guess it just looked friendly and relaxing, which can be nice sometimes when you are in between AAA shoot-em-up bangers. I took the plunge on PC, and was immediately hooked. So hooked, in fact, that I scurried over to my TV and bought a second copy of the game on PlayStation 4. For a game this fun and addictive, I wanted to sprawl on the sofa. I was gonna put some serious hours into Portia, and I knew it pretty early.

My Time at Portia, for those that haven't played it, is one of those town simulators that cropped up following the success of Stardew Valley - feeling kind of like a cross between that game and Animal Crossing. But unlike a lot of the wannabes and hangers-on, Portia is a stellar game, capable of standing on its own without riding any coattails. Over the past few years, Partia has become a cult hit, arriving on just about every platform to quiet success; the game currently has a Very Positive rating on Steam with 29,000 reviews.

The setup is simple, but the hooks are strong. Players arrive in town as a new "builder", and after a few early missions to learn the ropes, they are set free to follow whatever pursuits tickle their fancy. Over the course of the game, they become more and more involved with life in the town, meeting the various denizens of Portia and doing favors and missions for them. Most of these missions involve building stuff, which - by nature of needing new materials and building techniques - pushes the player further and further out into the open world.

It's been a few years since I went down the Portia rabbit hole, but I do have very fond memories of the game. I seem to remember futzing around with farming a little bit, but spending most of my time obsessively mining for lost relics. I did my best to attend town functions when they occurred (the town has its own schedule of activities, parties, and festivals, which you can attend or miss as you see fit). I definitely did some combat - I remember clearing a cave of bad guys and stealing all their stuff. But most of my admittedly fuzzy memories just center on the warm, happy feeling that I got playing the game, endlessly pursuing the ability to make bronze plates, or enough sheep hides to create a new jacket. 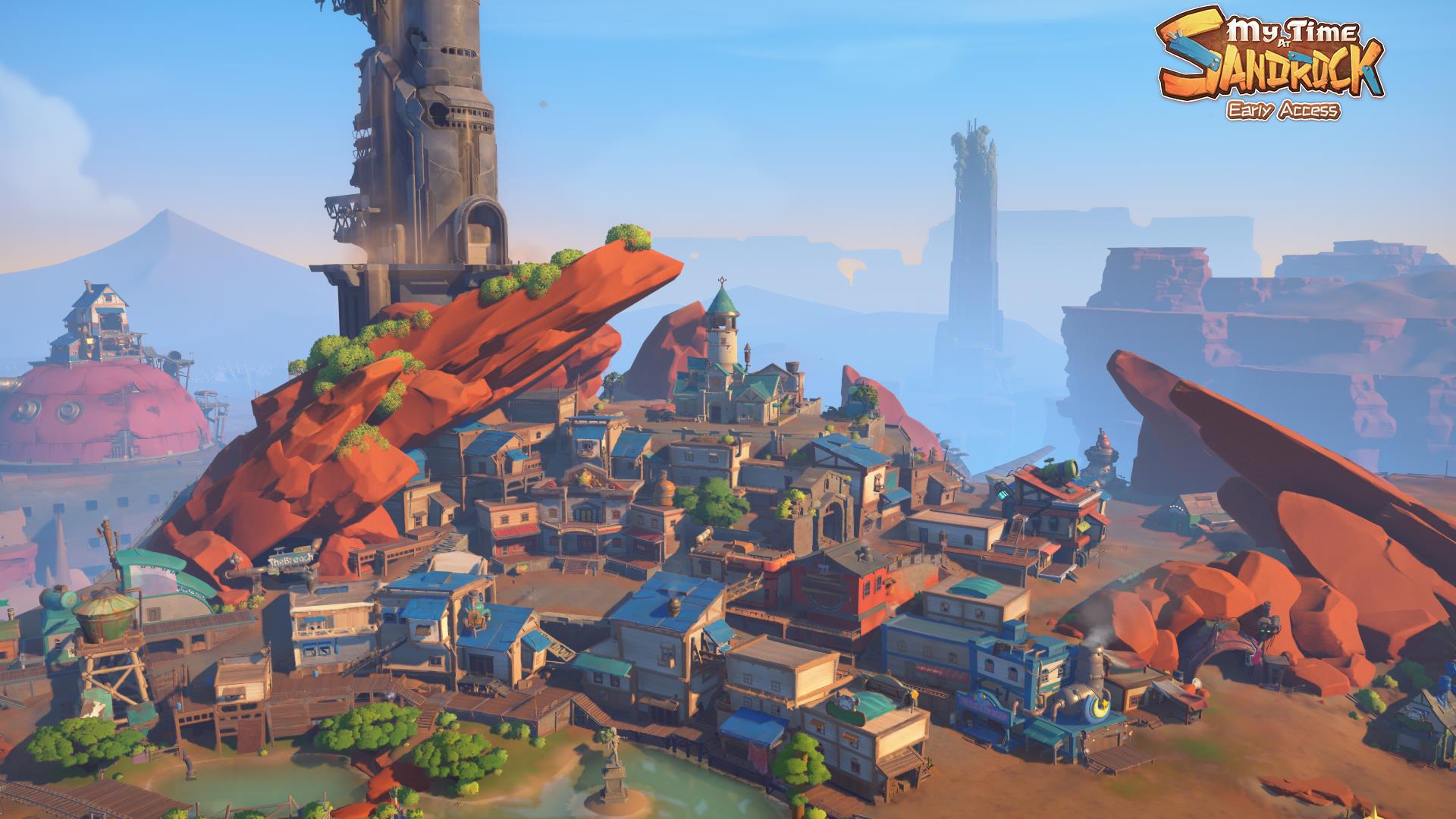 So yes, I loved My Time at Portia, which is why I jumped at the chance to take a look at My Time at Sandrock - the upcoming sequel to the original game. Sandrock began existence as an expansion to Portia, but before long Chinese development studio Pathea Games realized that in order to fully realize its full vision, it was going to have to start from scratch. The end result (or at least, the early access version of the end result) is a game that feels warmly familiar, sharing enough DNA with its predecessor that I felt comfortable diving right in, while still feeling better in almost every way.

The artwork in My Time at Sandrock is dramatically improved over Portia, as is the graphical performance. As soon as I booted Sandrock up, I whistled a little bit, because it is clear that Pathea Games has put some serious work into both the design and performance of this game. On PS4, Portia sometimes felt like it was just barely hanging on by the edges of its fingertips, a bit of a graphical throwback that succeeded on charm when its engine started huffing and puffing. Sandrock, on the other hand, is immediately visually arresting, coming right out of the box swinging with some amazing-looking visuals and a framerate (on my PC at least) that never sinks below a rock-solid 60-FPS. 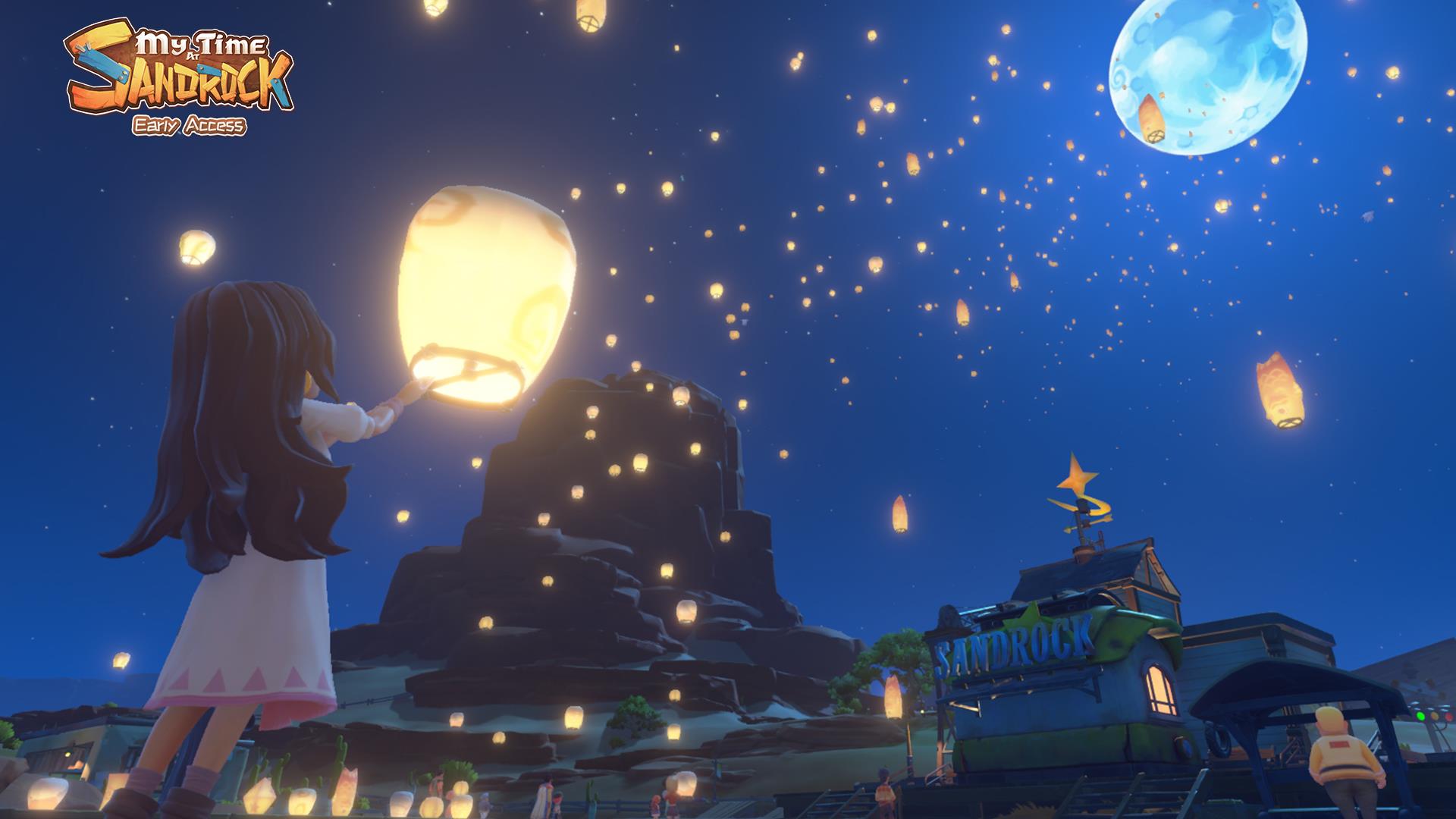 Part of the charm of Portia was the fact that the town had all of these little nooks and crannies hidden throughout it; even 40 hours into the game I was still discovering new places and people tucked into its winding map layout. Sandrock is very much the same, with streets that twist and turn around each other, and wraparound corners that reward players that take the time to see what is behind fences and buildings. Ditching the "little seaside town" vibe of the first game in favor of a post-apocalypic-sci-fi-Western-theme, Sandrock has a distinctive enough design that it feels unique and fun to explore, dusty and warm, with occasional sandstorms that sweep through the area. Though the early access version I'm playing doesn't have every character that will be in the game upon release, the town still feels very lively, with folks flagging me down to chat (and request that I build them umbrellas and troughs) every time I visit.

Everything - from the mission structure to the UI interface - feels as though it has been revamped and rethought, giving players a ton of options and choices at every turn while still feeling familiar and not the least bit overwhelming. I'm particularly impressed with the character creation tools, which allowed me to make a blue-haired character with a Bowie-wannabe tattoo on his face, a total freakshow that stands out from the Western-themed characters in town (but is fully accepted by everyone, despite his punk-rock-lite appearance). 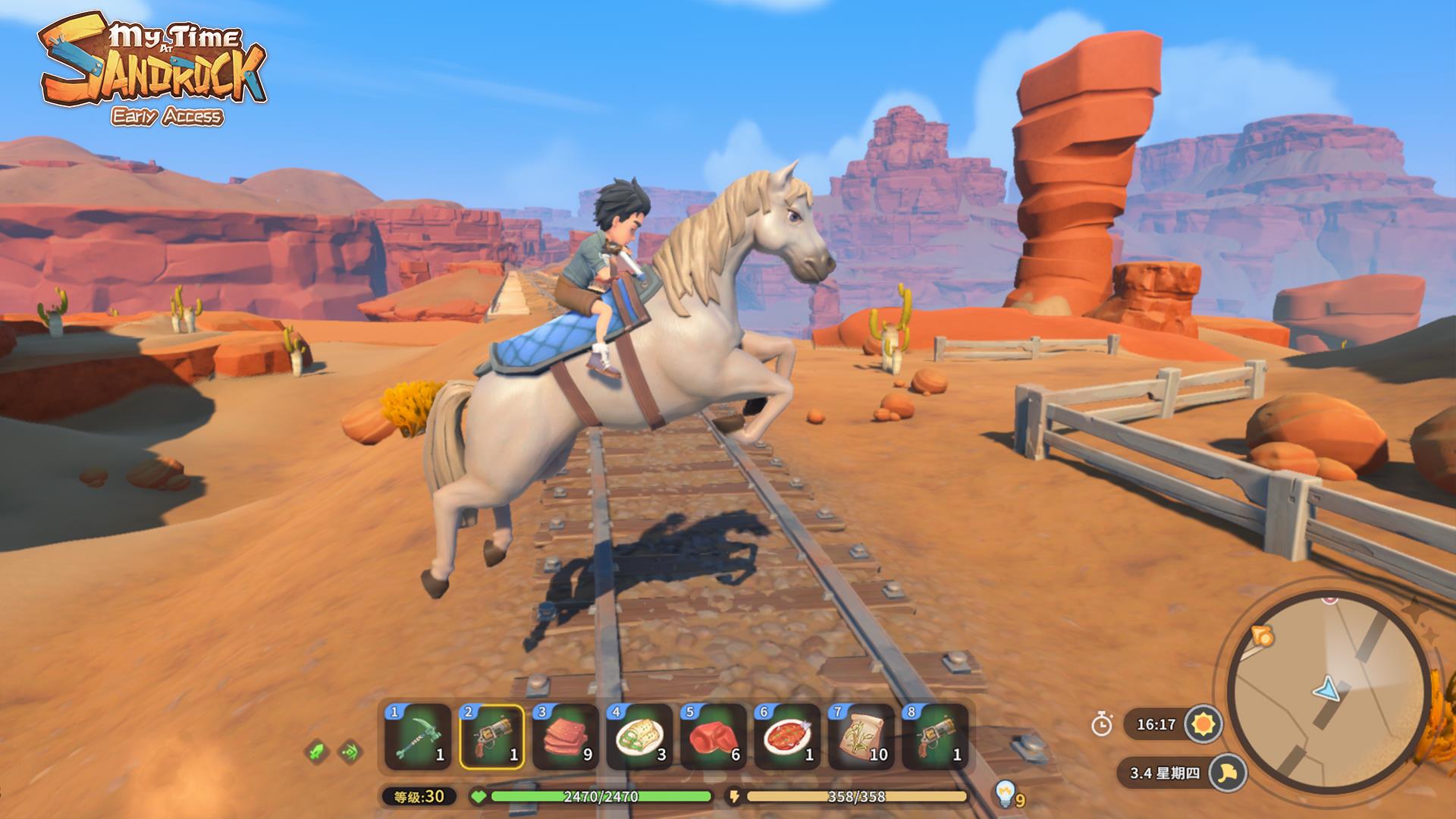 Once again, there seem to be an endless number of activities to suck players deeper into Sandrocks' gravitational pull. It is still early days for me in My Time at Sandrock; I've gone all in on mining at this point, but I haven't even hit the part of the game that will start me farming. But I can already tell that I'm going to be playing this game for at least a year. My Time at Sandrock is the sort of game that I could easily sink an hour a day into - and I have to force myself to stop when that time is up, because the stuff I want to do is queued up so deep that I could easily let four or five hours slip by.

It is not Gaming Nexus' policy to score preview or early access builds of games, and I'm not nearly far enough into My Time at Sandrock to offer that sort of in-depth opinion. Though this game frankly feels complete, there are many features yet to be implemented in My Time in Sandrock that will alter it before release - not the least of which is a multiplayer mode - which will need to be accounted for before I log a full review. But I can say that I absolutely love what I have seen of the game, and I have zero intention of stopping playing, regardless of what other reviews and previews come my way. 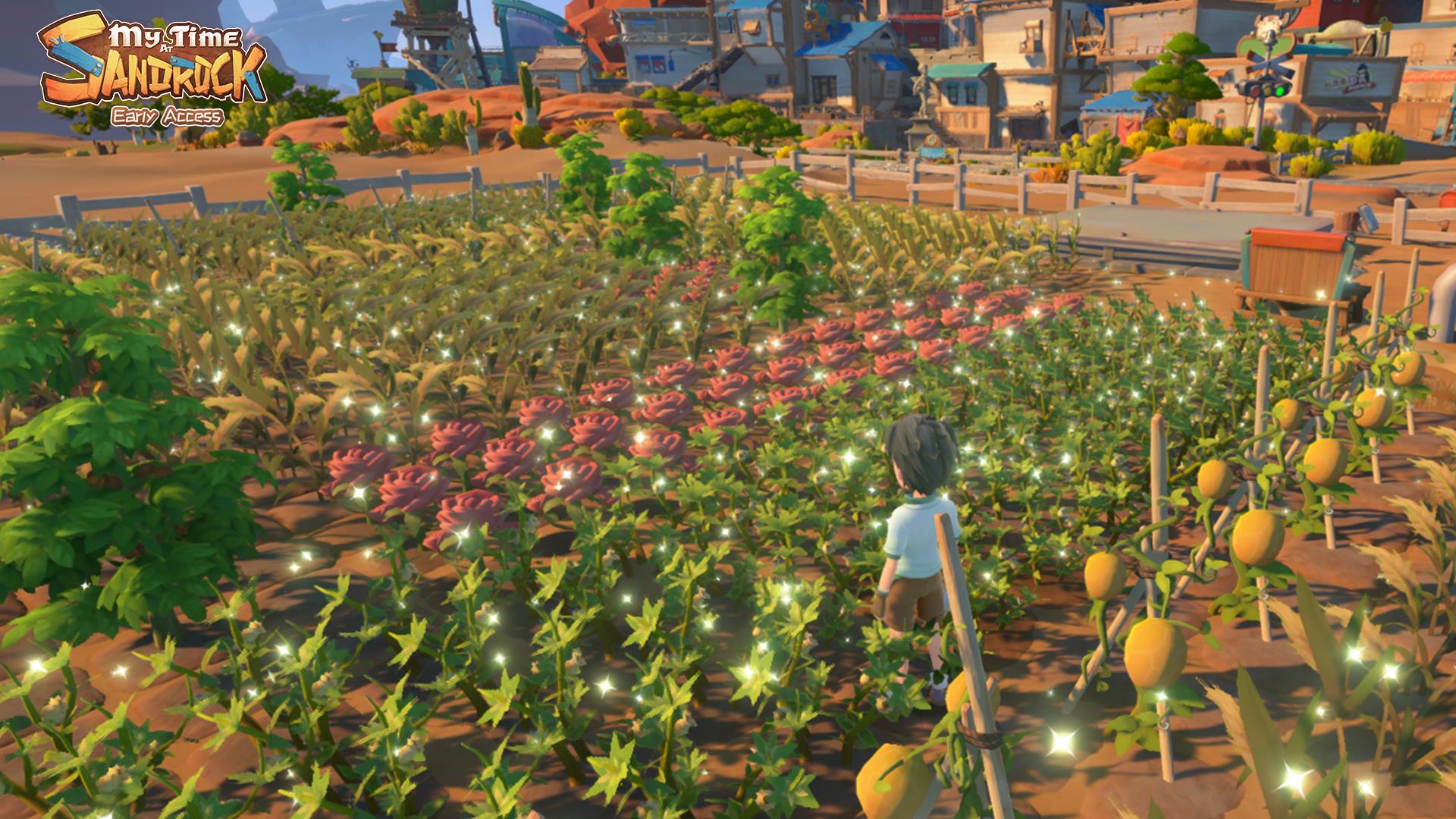 There are a lot of games that try to do it all, cramming in every mechanic under the sun but not really succeeding with any of them. My Time at Sandrock is one of the exceptions - everything it tries to do feels good and rewarding - whatever you find interesting is ultimately worth pursuing. If you had any love for My Time at Portia, or you enjoy sandbox/farming/mining/open world games at all, you simply can't go wrong by checking out My Time at Sandrock. This one is looking like an absolute winner, a time-sink that is rewarding, beautiful, and most of all, fun.