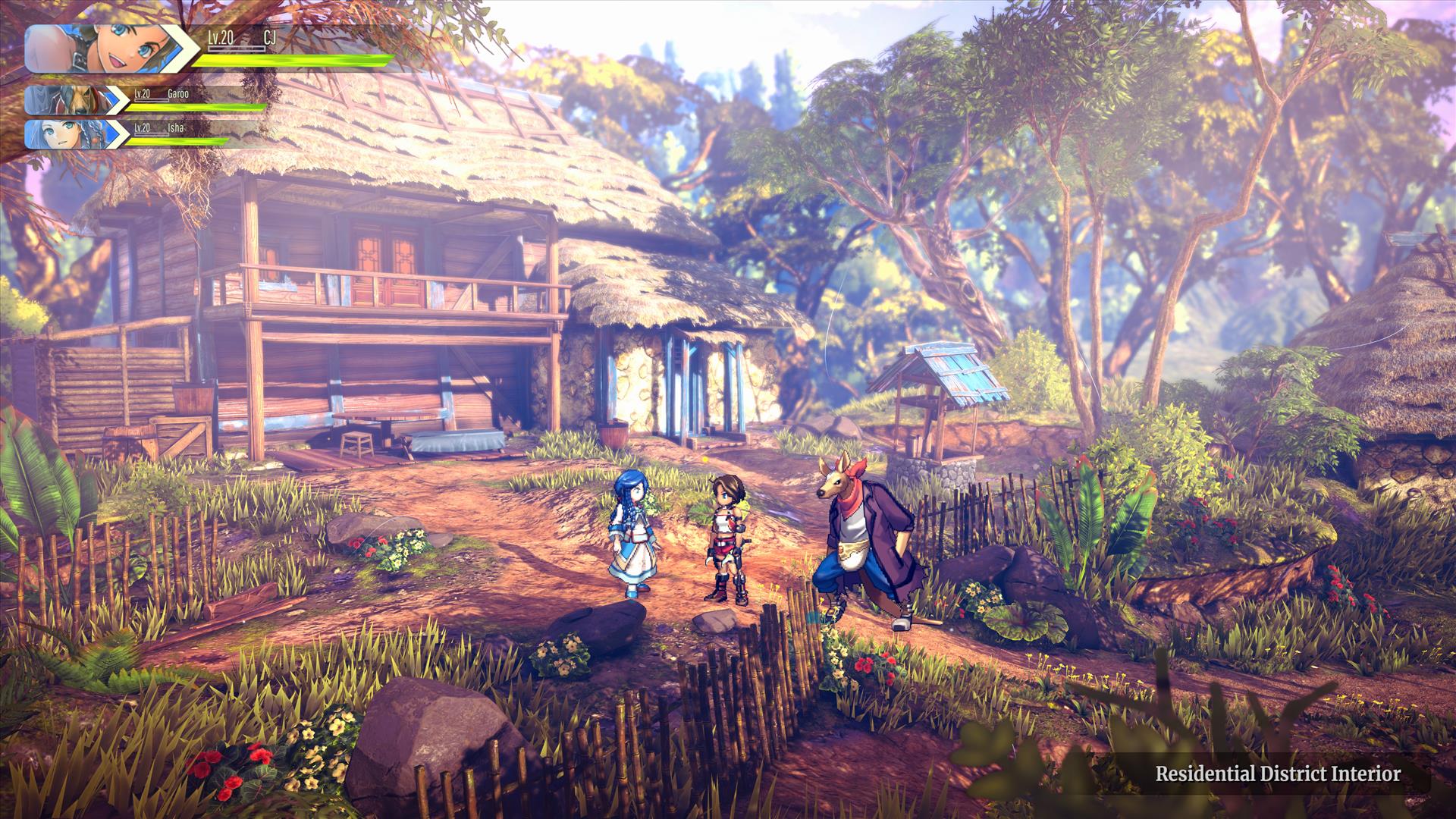 Written by Eric Hauter on 5/10/2022 for PS5
More On: Eiyuden Chronicle Rising

Eiyuden Chronicle is a cool case study in how to introduce a new franchise. Most development companies trying to bring players into a budding RPG universe would come swinging out of the gate with a full-fledged 60-hour banger, throwing all of their best tricks at the player in hopes of making an impression. Suikoden veterans Rabbit & Bear Studios and Natsumi Atari went a different route. In preparation for their upcoming full-length game Eiyuden Chronicle: Hundred Heroes, these teams have released Eiyuden Chronicle: Rising, a delicious little bonbon of a game that successfully introduces the world and a few characters with just enough addictive and fun gameplay to ensure that anyone that touches it will be foaming at the mouth to play the next installment.

Billed as a "prelude and prequel" to Hundred Heroes, EC: Rising is more than the tech demo fans might be expecting; this is a full-fledged game, with maybe 15 hours of gameplay (more or less, depending on how much you like to poke around and grind). Coming into EC: Rising a bit skeptical, I was quickly won over by the addictive systems in the game, along with a lightning-quick pace that constantly bombards the player with stuff to do, memorable characters, and mountains of quests to pursue. 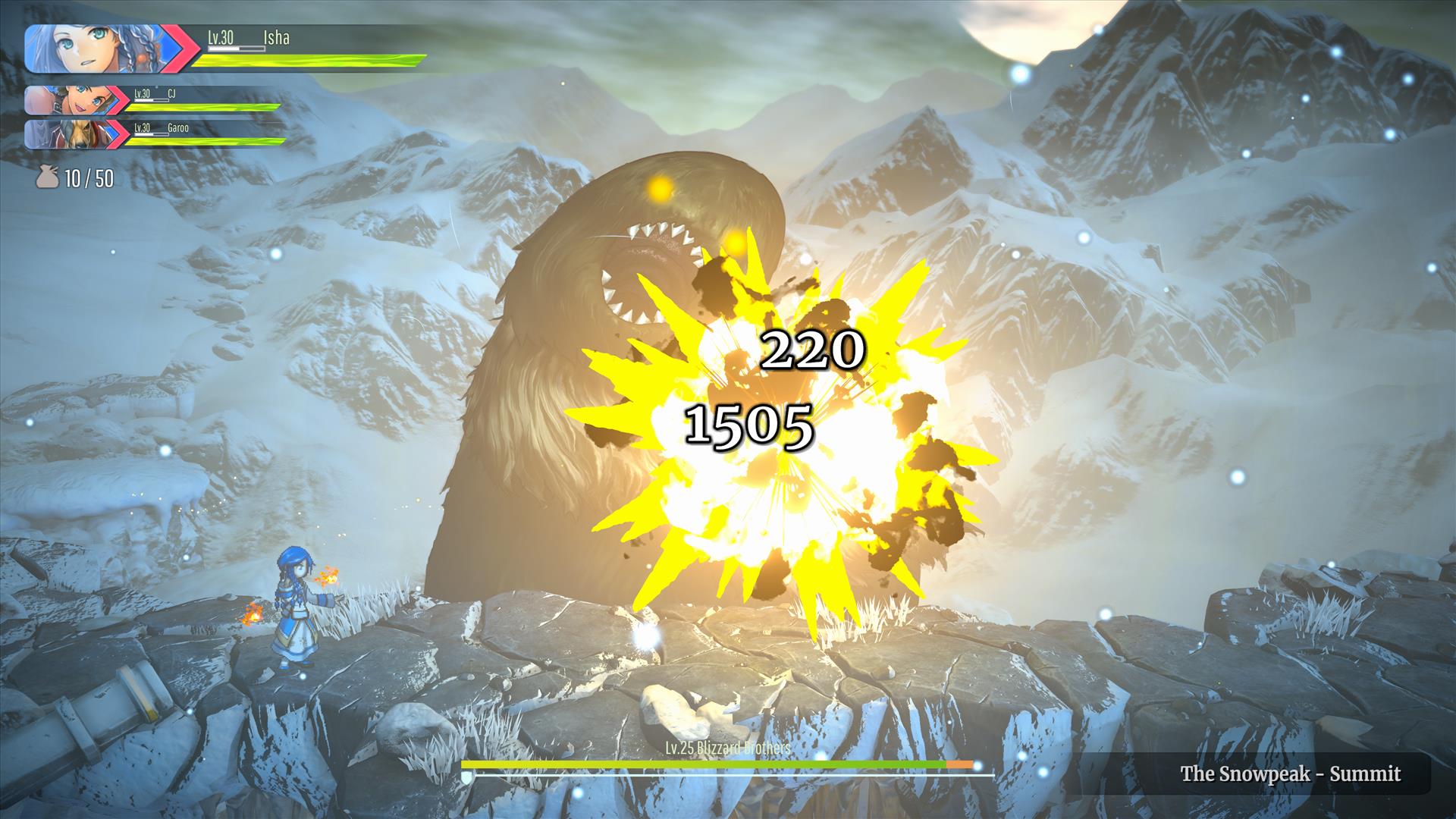 The player starts the game as CJ, a 15-year-old spitfire "ethical treasure hunter" out to make a name for herself by finding the largest, most-impressive treasure her family has ever seen. Turns out that this is a rite of passage in her clan; each generation needs to outperform the last when it comes to bringing home the best treasure ever. No pressure, kid. CJ wanders into New Neveah, a small town that is practically in ruins. A recent earthquake in town has unearthed a network of underground caverns, and adventurers and treasure hunters from all over the world are flooding in to try to claim the best relics before they are gone.

Isha - the rather savvy young mayor - has completely risen to the occasion, instituting a rather complex licensing and tax system to ensure that the visiting cave-divers don't strip the caverns of everything of value without the town getting its fair cut. As a result, CJ has to first earn her license to even enter the caves by doing good deeds for the folks around town, which helps ensure that a few shops are rebuild and some basic services are restored. Once she gains access to the ruins, CJ quickly becomes something of a folk hero for the people in town for her good cheer and helpful nature, eventually enlisting a few partners to help out with spelunking and town-building activites. Garoo, a hard-hitting kangaroo with a giant sword and a surly heart of gold joins her early on, and eventually the duo recruits mayor Isha herself to round out their trio with some handy ranged magic. 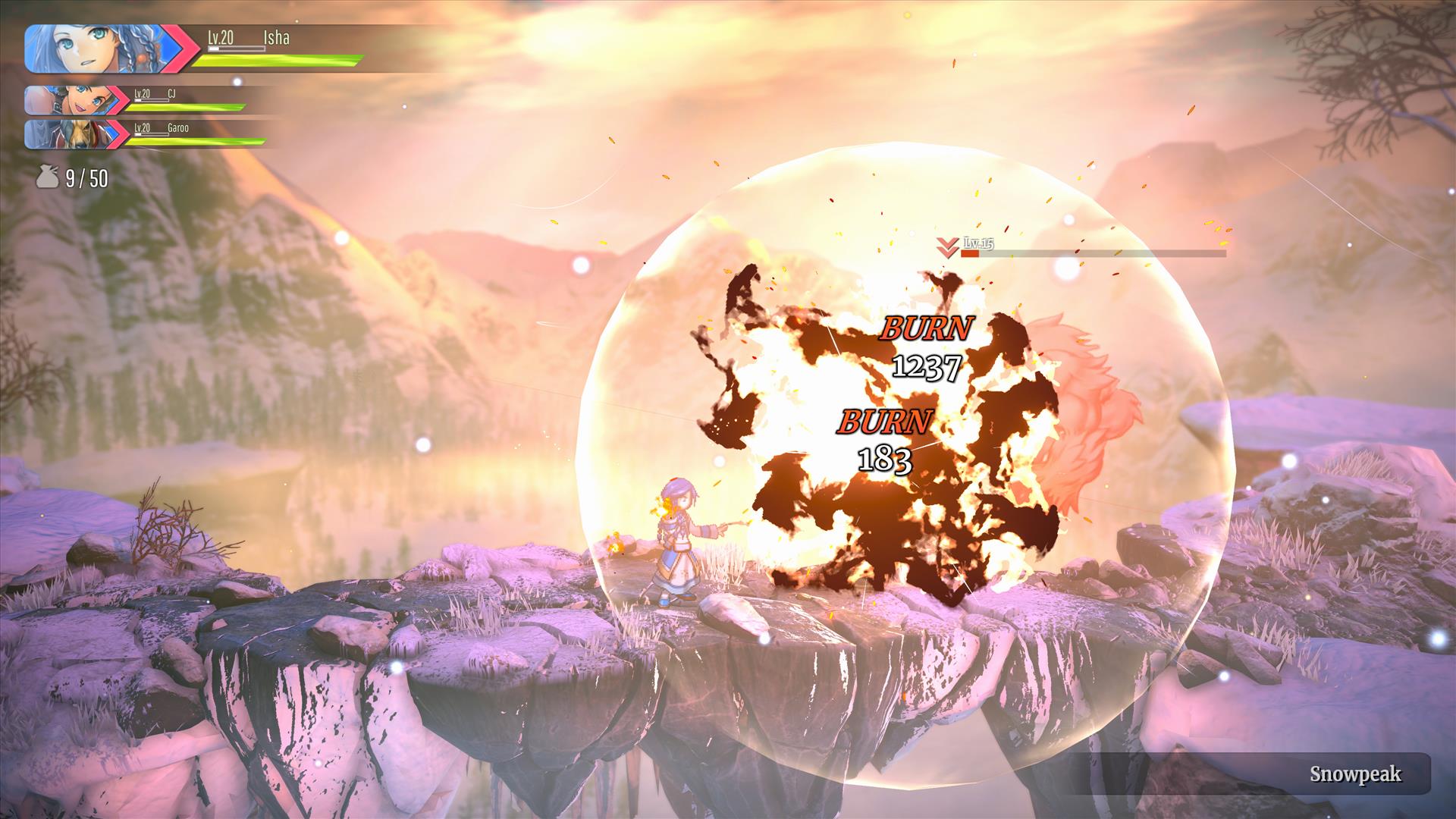 The characters are fun and engaging with their constant bickering, but the way the trio is implemented in combat is where the real magic happens in Eiyuden Chronicle. Each character is assigned a button on the controller. I was playing on PS5, so the Square button was CJ's attack, the Triangle was Garoo's, and the Circle triggered Isha's magic. As you are exploring the game's two primary dungeons (there is a forest in addition to the caverns), you can switch characters on the fly simply by tapping their attack button. For example, I would usually start a battle by tapping Square twice to get a few of CJ's quick axe attacks in, then tap Triangle, which brings Garoo surging onto the screen with a powerful swing of his sword. Wrap it all up with a large magic ball from Isha by tapping the circle.

All of these attacks happen just as fast as you can tap the buttons, with the characters appearing and disappearing with each attack. You kind of have to see it in action to understand, but the end result is ridiculously intuitive - and cool as hell - as you can try different cadences and combinations to build some massively destructive combos. Each of the characters has different traversal powers as well, which gives exploration a really cool puzzle-solving element. For example, you can use Garoo to jump high up into the air, quickly switch to CJ to dash forward, and then use Isha to hover slowly down to a distant ledge you were attempting to reach. 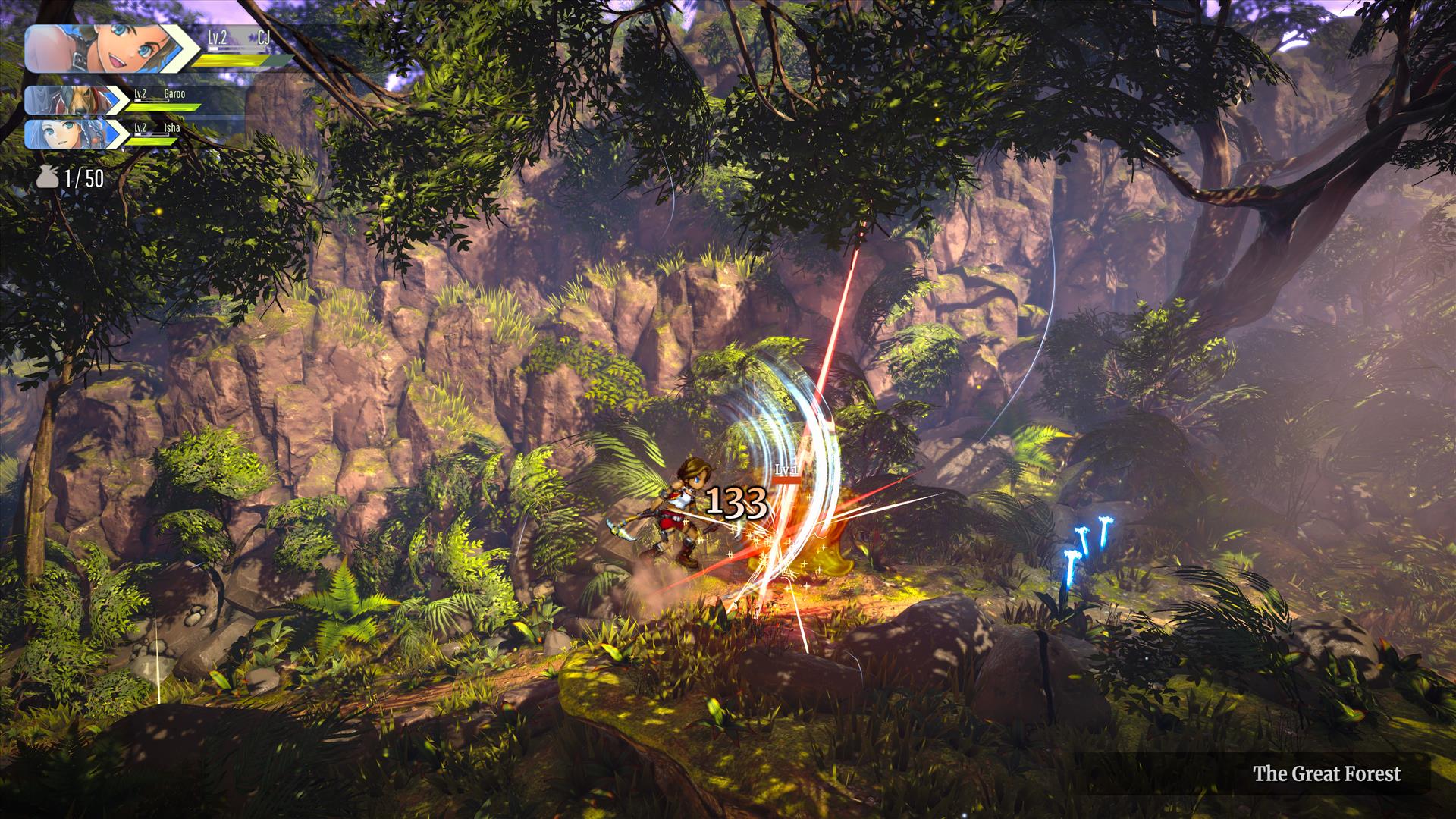 Eiyuden Chronicle is a side-scrolling RPG, which I normally don't care for, but I was completely won over by EC: Rising's clever design. The character animations are lively and fun, and the backgrounds are beautifully detailed, giving the game a vibrant look and feel. After you get your feet underneath you and learn the ropes, you quickly fall into the game's addictive loop, which has you alternately exploring the Metroidvania-lite dungeons and running around the town collecting and turning in quests. Like everything else in this game, this loop is very well designed. I quickly established a route I would run through the town, dealing with the variety of quests that organically appear with each visit. Then I would delve into one or both dungeons and explore until my pack was full. This will likely give you enough materials to resolve at least half of the quests in your log, so then you go run around town again.

About 50% of the time, turning in a quest will result in some improvement being made to one of the many, many shops that appear in New Neveah, which in turn opens up new gear, perks, and even more quests. Before long, the player is happily grinding through an ever-growing, always rewarding cycle of fun exploration and prize-reaping. And of course, a narrative unfolds as the game progresses, pushing the player forward while dangling just enough mystery and intrigue to ensure that they will return for the big kahuna later this year. 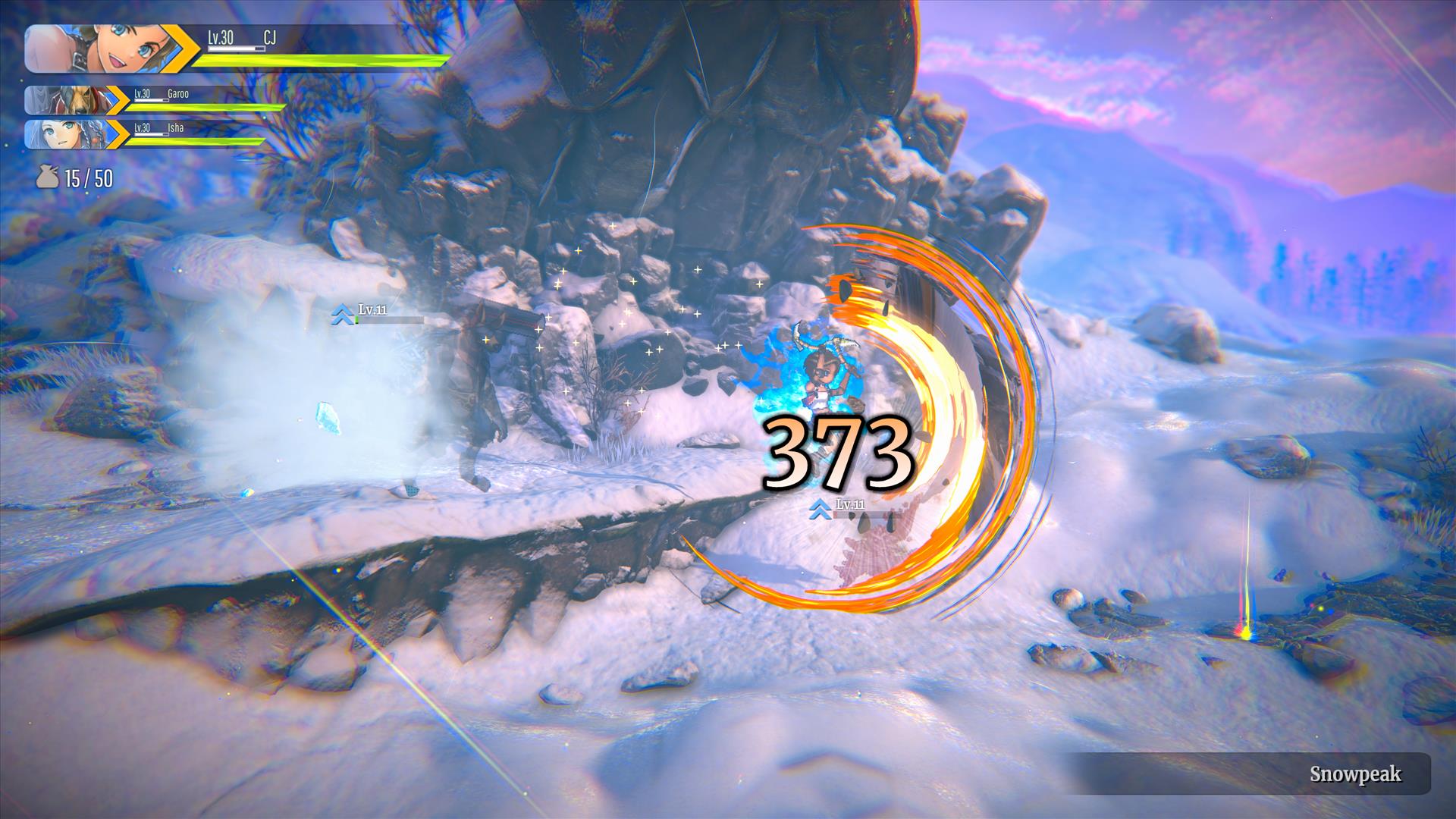 Will you need to play Rising to enjoy Hundred Heroes? Not likely. I'm quite sure the later game is designed to stand on its own perfectly well. A few rewards that will appear in Rising's big brother range from "kinda neat" to "probably inconsequential". But that is all missing the point, which is that EC: Rising is fun to play - well worth the $15 price even if no game was ever going to follow it up. The fact that it supports another title is simply gravy.

I had an absolute blast with this breezy game, happily whiling away hours whomping on monsters while reveling in the constant dopamine drip of rewards. I never died once while playing, and I was totally cool with that, as the game's fun vibe kept me engaged for the duration. Never confusing, but always engaging and fun, Eiyuden Chronicles: Rising unfolds like a flower, pulling you along as it reveals more and more layers. I love the concept of this game being a prelude to a much larger, more complex experience that is coming later - it feels like a delicious appetizer that assures the player that the chefs working on the main course absolutely know what they are doing. EC: Rising is a clever, auspicious start to a fun new franchise, and I can't wait to see where the story goes when this team delivers the feature presentation. If this game is any indication, we'll soon have a new classic on our hands.

Eiyuden Chronicle is a quick and frothy good time - exactly the introduction to the Eiyuden universe that was needed to get players excited for the next game. Cool, lighting-fast combat, fun characters, and non-stop progression all combine to make this a title worth exploring. Consider my appetite for more from this universe to be fully engaged.