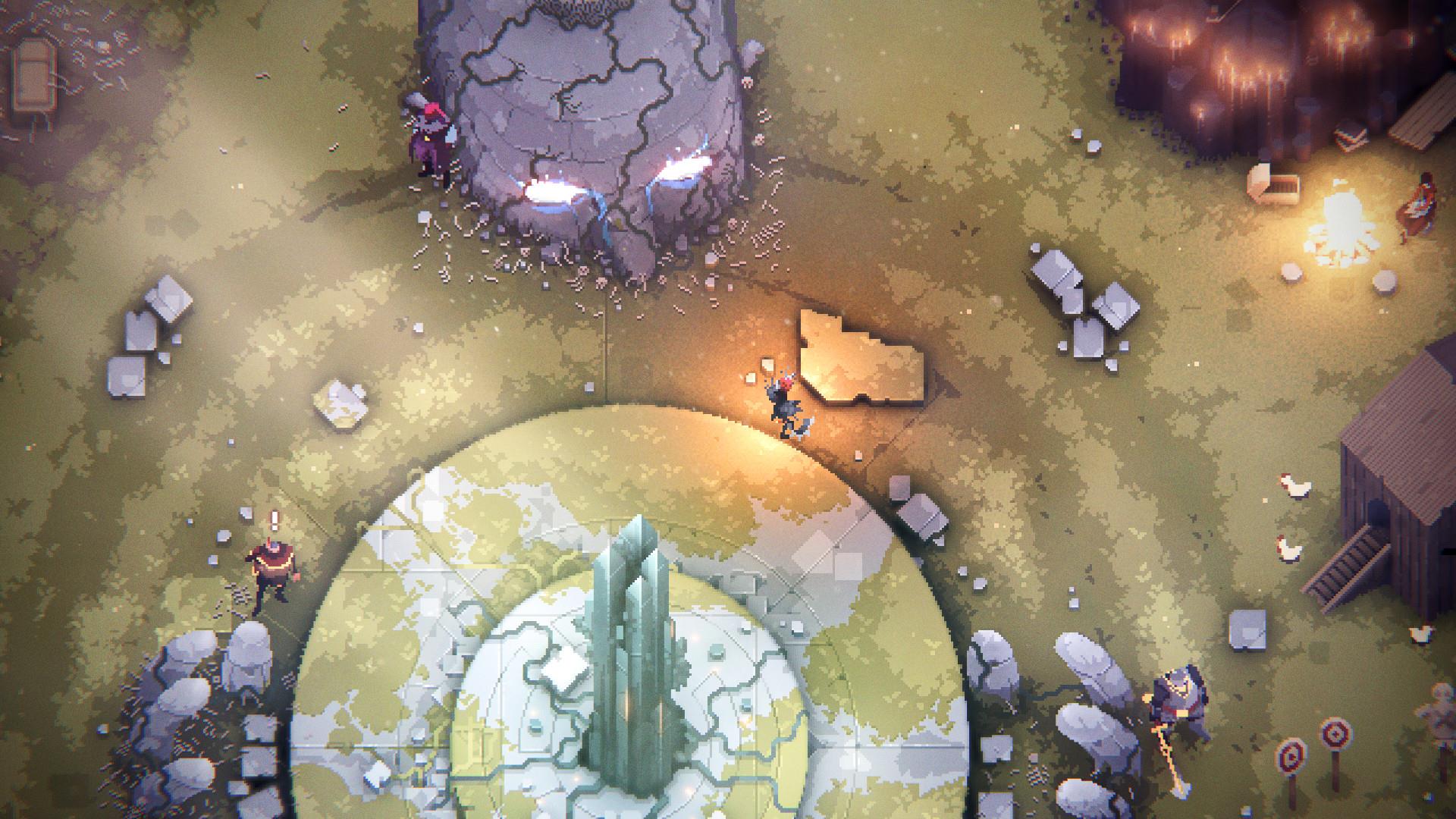 One of the unwritten rules we try to follow when reviewing new titles is to not compare one game to another game. Second rule is we do not talk about fight club. Generally I agree to both rules, but let’s break the first one. Straka.studio bills Loot River as a mix of two games, a Souls-like and Tetris. It's dangerous to say anything is like Tetris. When someone says, hey this is like Tetris, I expect to have visions, almost nightmares, when I play the game. I want to see the shapes in everything. Like in the lines of the carpet, or the clouds.  I want to be enamored by the spell a Tetris-style game puts on me. Proclaiming a similarity to an existing classic puts a developer at risk; saying your game is like something else puts undue pressure on it. Unfortunately Loot River is not like Tetris, which is a shame. It’s its own fun, enjoyable self, and has unique mechanics, but it’s not Tetris. Are there shapes that go into other shapes, yes. By that definition putting on shoes is like Tetris, they fit.

While I was a little disappointed in the lack of Tetris I was not let down by Loot River at all. In the game platforms float above water, you can walk onto them, and once on them control the direction they go. You move from platform to platform, hacking and slashing your way from level to level. The most unique gameplay element is that the platforms you move upon to and fro are under your control while you are standing on them. One joystick moves your character, the other the platform you are on. This also sets up Loot River to act as a bit of a puzzle type game.

The puzzle solving aspect starts out as very simplistic. You move from one platform to the other, fighting as you go. You also can control the platforms, as they are sitting in water. It’s more of a floating dock than platform situation. Moving platforms in early levels is easy, you can go almost anywhere you want without much hassle in the early levels. And then platforms begin to have levels, and staircases. I never fell in love with the puzzle aspect of the game. They never seemed truly challenging or puzzle-like, more of a slight befuddlement I had to get over. 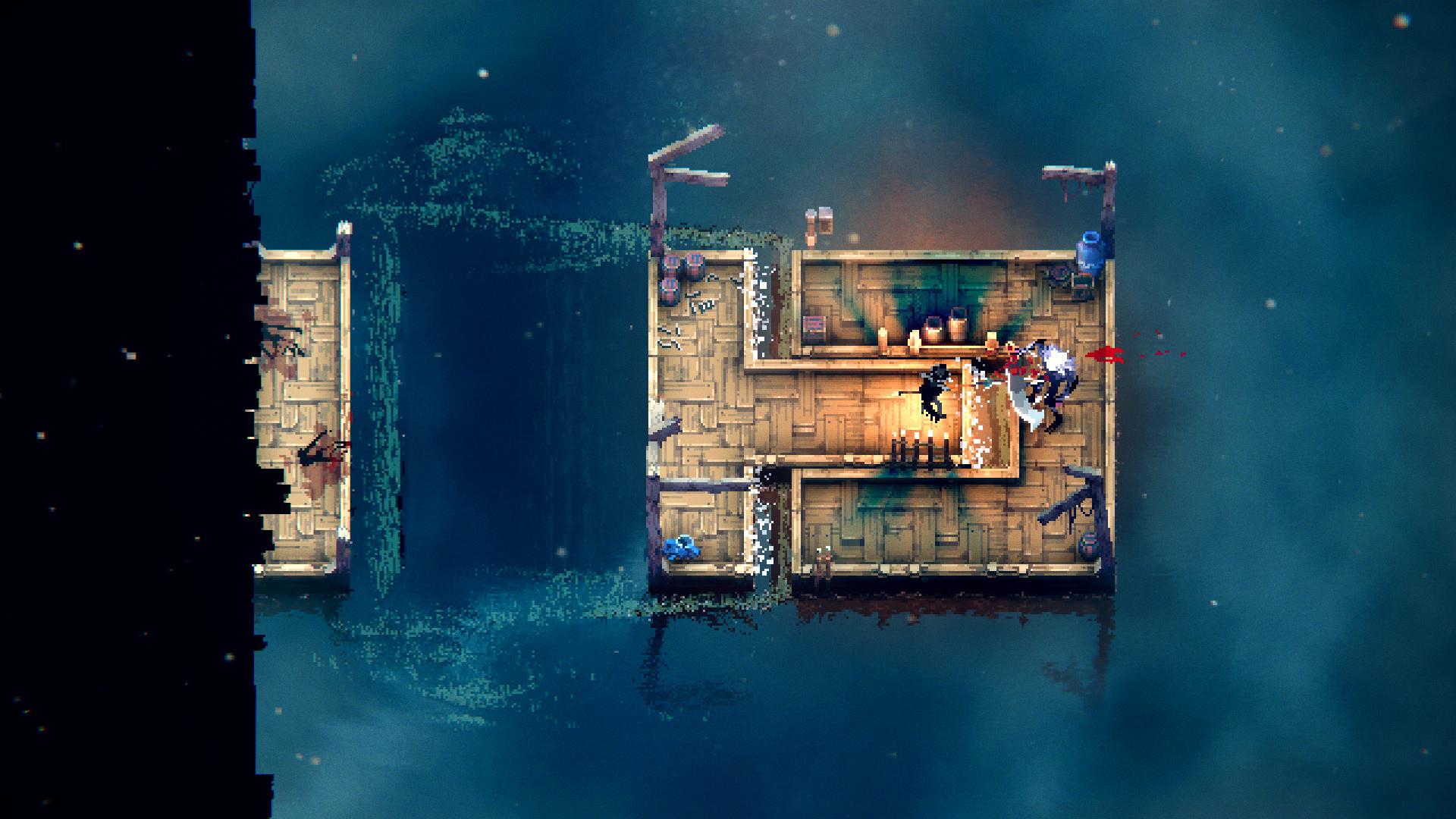 The other big game mechanic is combat. In Loot River it is a very standard affair. There are multiple weapons to find and pick up. Each is different enough to not feel identical, but also not changing enough to really matter when you get down to the nitty gritty. The combat itself is exactly what you would expect, but that does not mean it isn’t difficult. In this case, the comparison is accurate. The Souls-like part of this game is very evident; death is a regular occurrence in Loot River, expect it often. Later levels are a nightmare.

While dying is often a big part of Loot River, oftentimes it just doesn’t feel right. Death comes almost too randomly. Of course, most of the big fights in the game take time to learn and get through, I’m not talking about those deaths. I found myself dying to mobs I’ve cleared plenty of times. My main issue with dying in Loot River is the lack of learning from it. Souls games work best when I can understand why I am dying. While I can understand the fighting patterns of enemies, oftentimes the sheer number of enemies I had to overcome was overwhelming. I found myself getting frustrated at parts of the game I had cleared enough for this to not feel like an issue. It’s not fun to die again and again because I can’t beat back massive squads of enemies. 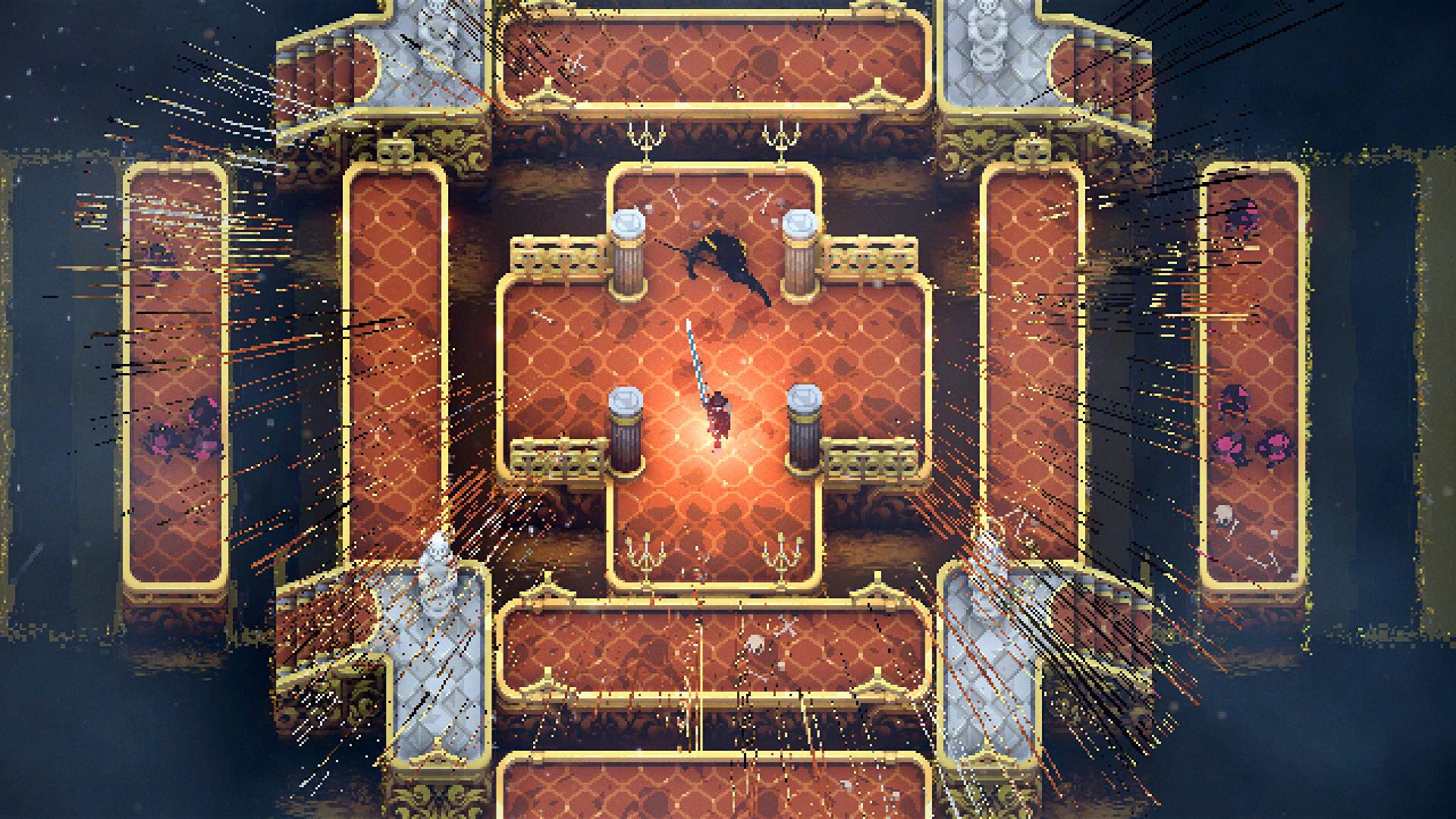 Having just said that too many enemies in Loot River is too much, the enemies themselves are great. When fought in smaller, manageable doses, learning the patterns is a fun experience. They are unique, well thought out, each with their own patterns to learn and avoid. It’s not just the enemies that are well crafted and polished. The pixel art for them, and the game in general, is fantastic. Messy and rough around the edges, it gives off the allure of needing to hurry up through levels. It doesn’t look perfect, and combat can make it look a little sloppy but that’s part of why I love it. The music also adds a great depth to the game. The timing of music when you enter areas of interest or big fights fits the tone well.

Controls also work very well. Controlling your character with the left thumb stick while you move the raft-like platforms with the right becomes easier the more you do it. Having the attacking actions on the trigger and bumper works well too. But you have to play with a controller. I can’t imagine the struggle to play this game on PC without one, a truly insane person may attempt it, but I can’t imagine getting very far, or having much fun doing so. Loot River even warns you before playing that you’re better off with a controller. 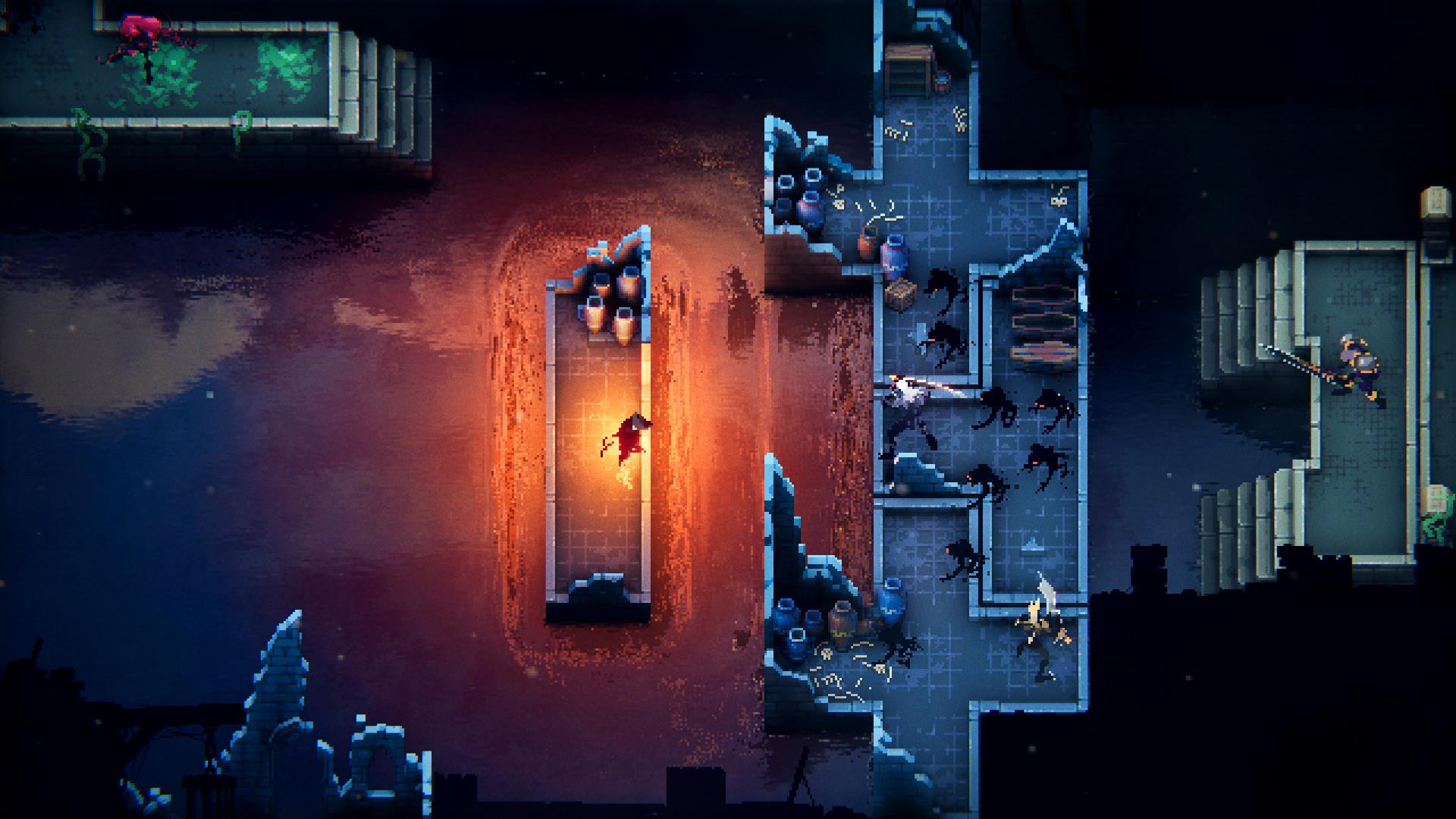 The procedurally generated labyrinth is mapped out differently each time, but feels very similar to prior runs. Levels look different from one to the next, but I’m a slower learner when it comes to Loot River. I found myself seeing the same handful of levels again and again. That could be why I felt the scenery doesn’t change enough, or it could be because you can only do so much with floating platforms on a river bed.

When I play a Souls-like game I ask myself a few questions. Is it rewarding, do I know what I did wrong, can I improve on it in the next run? I don’t think Loot River is rewarding enough to get me to come back again and again. I would get frustrated with a run and need a break; I never had the one-more-run mentality a great roguelike gives me. I found myself unsure about why I was dying. The leveling system looks nice, but doesn’t feel like it impacts my runs in a meaningful way. But I could be a moron that didn’t understand it well enough; I never knew how to improve. I also felt the difficulty spike was too sharp to have any pure enjoyment on a run, just small victories.

Loot River has a lot of good features. Controls, artwork, music are all very nice. The combat, while not bad, does nothing to move the genre forward. The unique Tetris-like platform moving is enjoyable, but nowhere near the complexity or difficulty of Tetris. I can see the potential for a great experience, but it just isn’t quite there. Occasional difficulty spikes that knock me for a loop and put me out of the mood to make another run leaves Loot River as a good, not great, game.