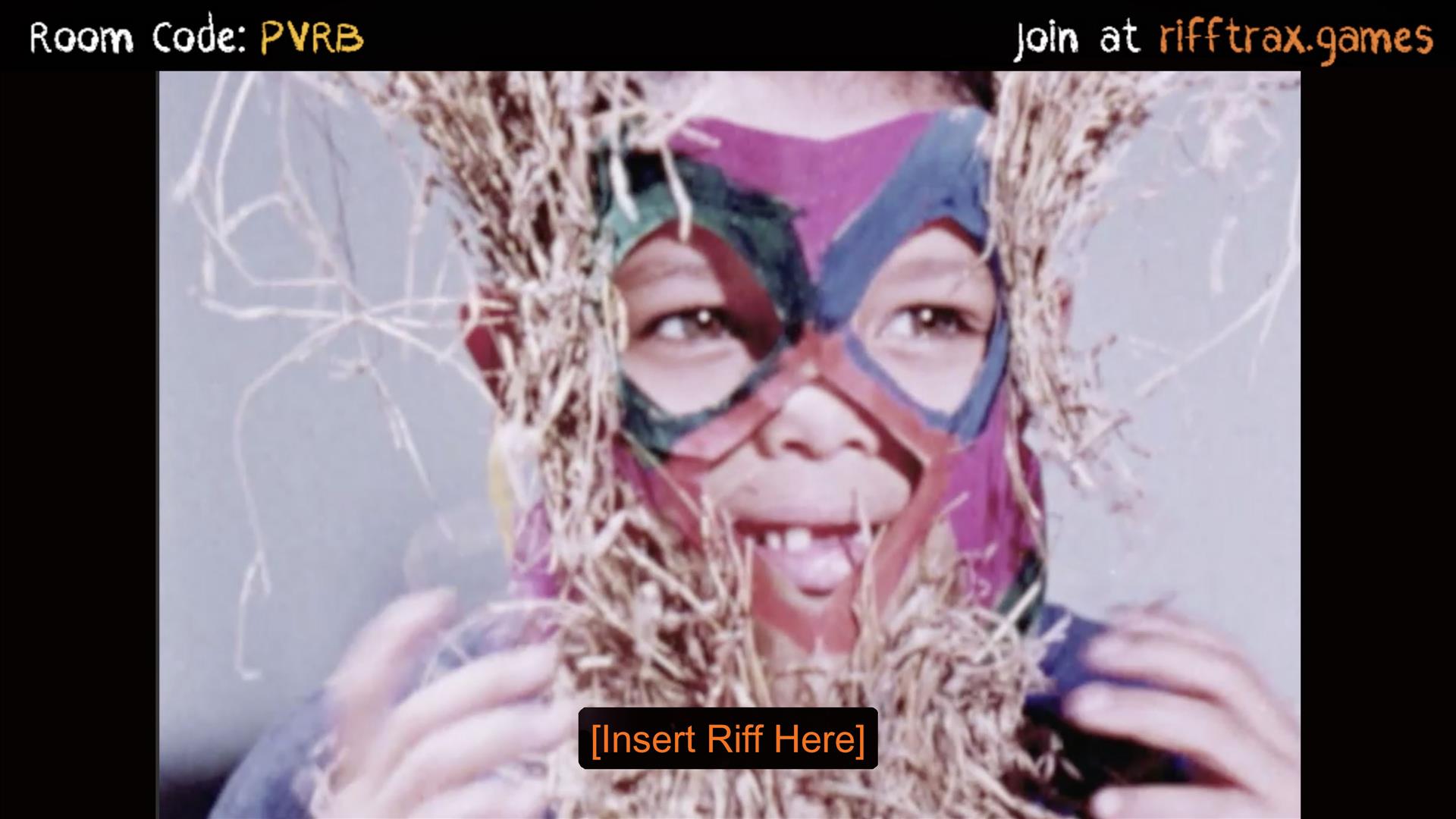 RiffTrax is an unusual property - one of those niche things that never could have existed before the internet, but has somehow found a way to thrive online. If you know it, you know it, and you probably love it. But if you don't know it, you could be a little bewildered by how it all works. RiffTrax started as an offshoot of Mystery Science 3000, the beloved show where a guy and a couple of robots deliver rapid-fire jokes over terrible (usually old and kinda sad) films. When MST3K went belly up for the first time (it has continuously come back in various forms over the years), a few of the writers and comedians behind the show formed RiffTrax, a sort of subscription-based offshoot that had a built-in audience with the MST3K crowd. RiffTrax loses the conceit of the robots, but keeps the jokes, streamlining the experience to just the unedited film and a stream of rat-a-tat jokes that never stop coming.

You can buy RiffTrax online in a few different ways. You can get older films and shorts with the jokes embedded in the video. Or you can buy audio tracks that can be synced with a movie while it is playing, which is how RiffTrax gets around copyright issues and can make fun of huge Hollywood releases. Some RiffTrax are available on various streaming platforms, and you can even find some of them on YouTube. There's a lot of content here - the RiffTrax website says that the gang has riffed on 470 films, 416 short films, and 16 TV episodes at this point - and new stuff is coming all the time. The RiffTrax group has a solid hustle going that they started from scratch, and they know how to market the goods. There are tours where they perform live. There is merch available for purchase. And now, there is a RiffTrax video game. 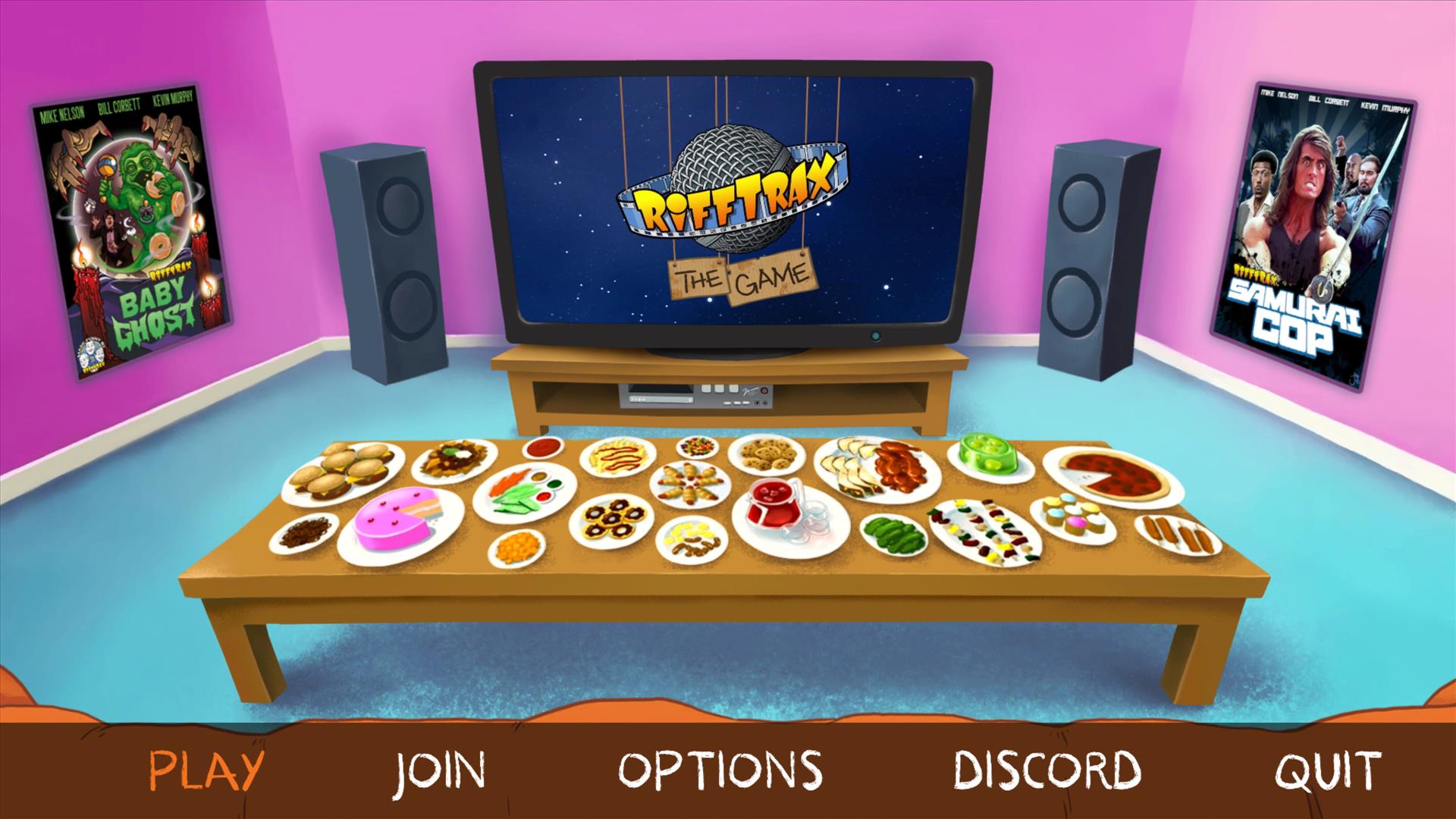 Let me be very clear here: I'm coming to this game as a RiffTrax fan. I've only seen a small fraction of the content these guys have produced, but it never fails to make me laugh. RiffTrax as a franchise is one of the most clever and consistently entertaining properties around. So I had pretty high hopes for RiffTrax: The Game, which is a sort of Jackbox-style party game in which users create their own jokes that play over very short clips from some of the weirdest RiffTrax films to come down the pike. It's a solid idea, but in execution there isn't really much to latch onto here in the way of gameplay. RiffTrax: The Game is pretty much a one-and-done proposition - something that will succeed in making your friends laugh for an evening (if you have funny friends), but an experience you won't likely return to after a few rounds.

Anyone that has played a Jackbox title will find the interface here familiar. After setting up the game options (number of rounds, voting method) with the controller, you set it aside and use your phone to play the actual game. By going to a website and entering a room code, players log in with their names. The interface is slick, quick, and easy to set up. I put together a small group of RiffTrax enthusiasts for my session, and everyone found the UI extremely easy to navigate. 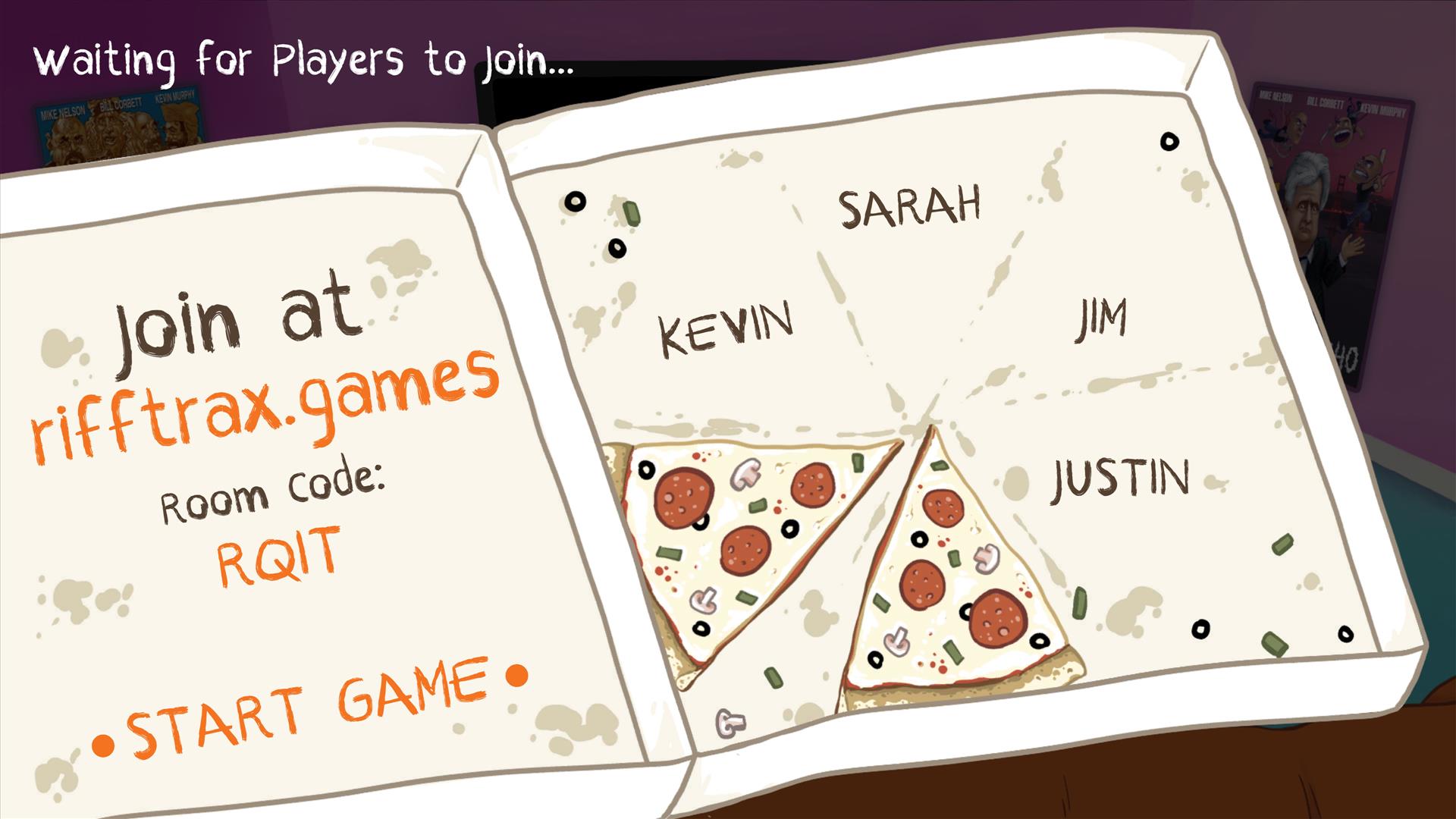 Of course, finding enjoyment in the game is something else entirely. There are two modes in RiffTrax: The Game, one of which is serviceable, and one of which is downright unplayable. In the first mode, "Write a Riff", players are shown a brief clip from a weird old film (the game seems to have about 10 films that it is drawing from, but to be fair, my group never saw a repeated clip). After a line or two of dialogue, players are prompted to "write a riff", meaning that they type a joke into their phone. The amount of time you have to think and write can be adjusted; we set ours up for 60 seconds, which seemed just enough to keep the pressure high while still giving enough time to complete a thought.

Once everyone has submitted a joke, the game proceeds to play the clip repeatedly, inserting each joke at the appropriate moment being read by a relatively decent text-to-speech AI (while also providing one ringer joke, provided by the folks behind the show). This is the make or break moment for RiffTrax: The Game. If you have funny friends, you will likely laugh a lot at what people come up with. If your friends are not funny, expect a lot of pointless swear words, poop jokes, and a room full of stony, uncomfortable silence. Luckily, my friends are funny, clever people, so we had a pretty good time playing for a while. The AI reader-bot, of course, has no sense of comedic timing, but you can still get around that with witty writing. 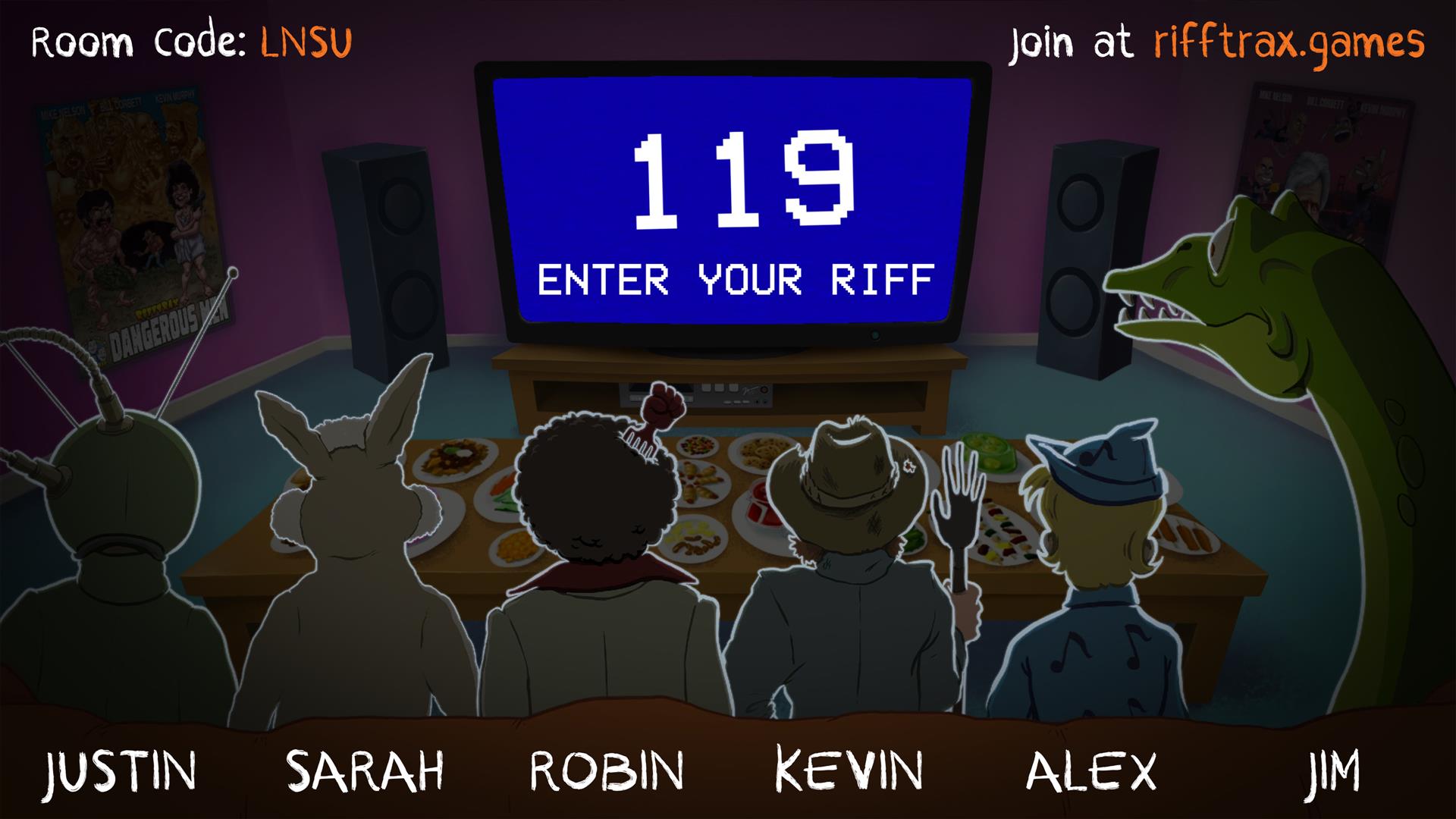 For example, in one clip a space ranger demands that another "Turn around!". A person under the gun without any ideas might type in something like "Look at me when I am talking to you." My wife, however, who is a genius, typed in "Every now and then I get a little bit nervous that the best of all the years have gone by." This was funny regardless of (maybe even because of) how poorly the AI robot read it, and is a prime example of how you win a round of RiffTrax. But playing this game also shows just how talented the creators of RiffTrax really are - coming up with something funny on the fly is much harder than you might thing.  There were times where the best I could do was type nonsense like "Duck duck bird" and hope that it made someone laugh.

At the end of each round, everybody votes on what their favorite jokes were and scores are revealed. The scores escalate in every round, so performing well at the end of the game can make up for any duds you threw against the wall early on. At the end, a winner is crowned, goofy credits roll, and the game can be restarted. Again, not a bad game, just not a lot to it. 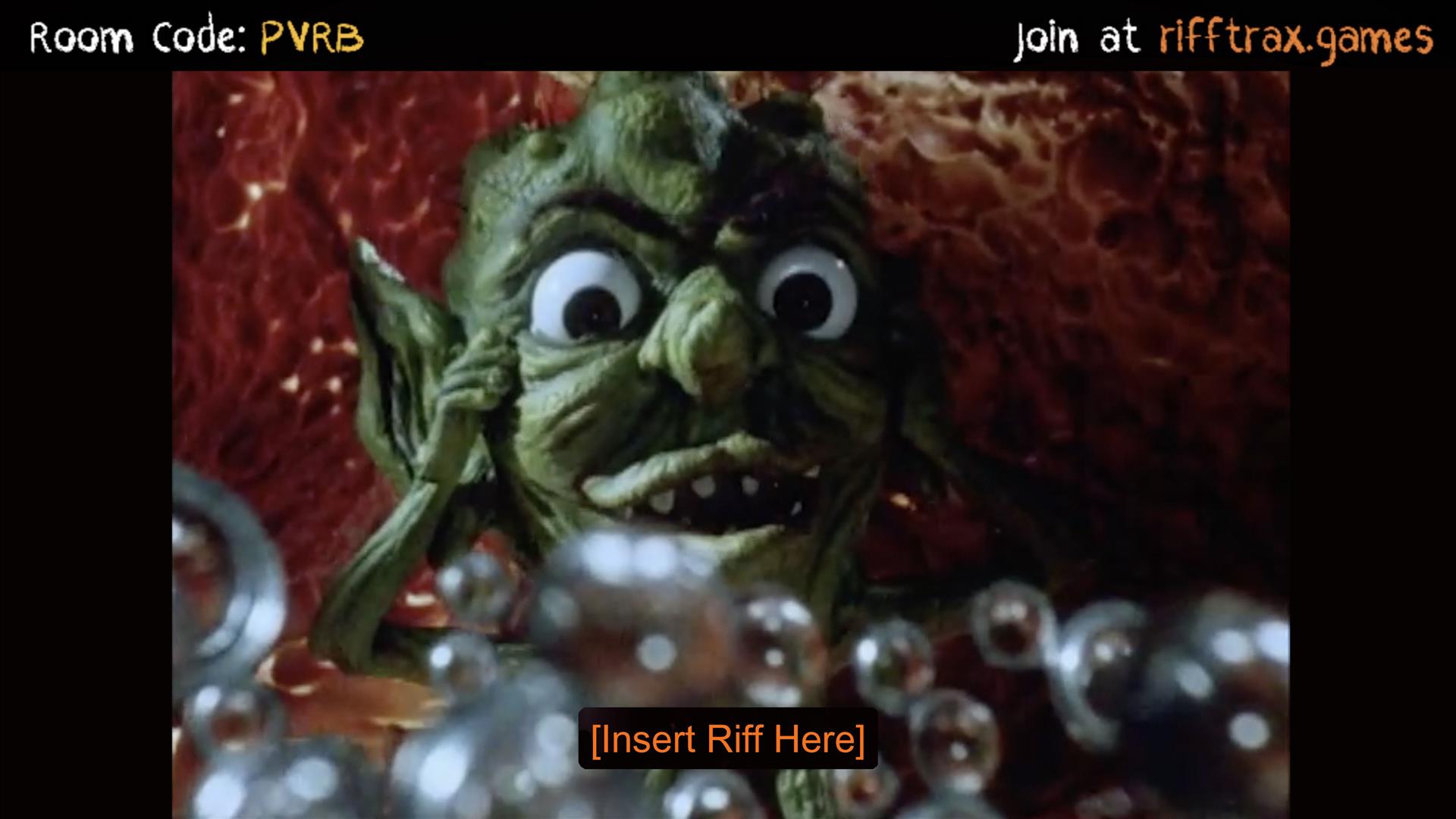 The other mode, "Pick a Riff" is absolute nonsense, and should be avoided at all costs. The same structure begins, with everyone shown a clip. But instead of being able to write a riff, the players are supplied with a list of maybe eight pre-written jokes to choose from, most of which have nothing to do with what is happening on screen. I can see what the game designers were going for here - there is an absurdist element similar to Apples to Apples at play, where players can try to match up something that is vaguely associated with what is happening on screen. But in reality, everyone was moaning at their lack of decent choices. To make it even worse, the game doesn't supply the player will all new choices after each turn - your bad choices stay will you from turn to turn unless you use one of your two "refresh riffs". This mode brought the room to a complete standstill, outside of the occasional burst of rage at how much it sucked. So yeah, fifty percent of the game is pretty much unplayable nonsense.

I would be remiss if I didn't mention that RiffTrax is set up with a lot of nice online options, none of which I was able to test in the prerelease period in which I played the game. RiffTrax supports remote games, cross play, and voice chat, which is a bit above and beyond for a game of this nature. There is also a Twitch integration that will allow streamers to get their chat in on the action with Twitch Chat voting, and a bunch of tools that will prevent you from getting flagged for content copyright while playing. So all of that is pretty nice. 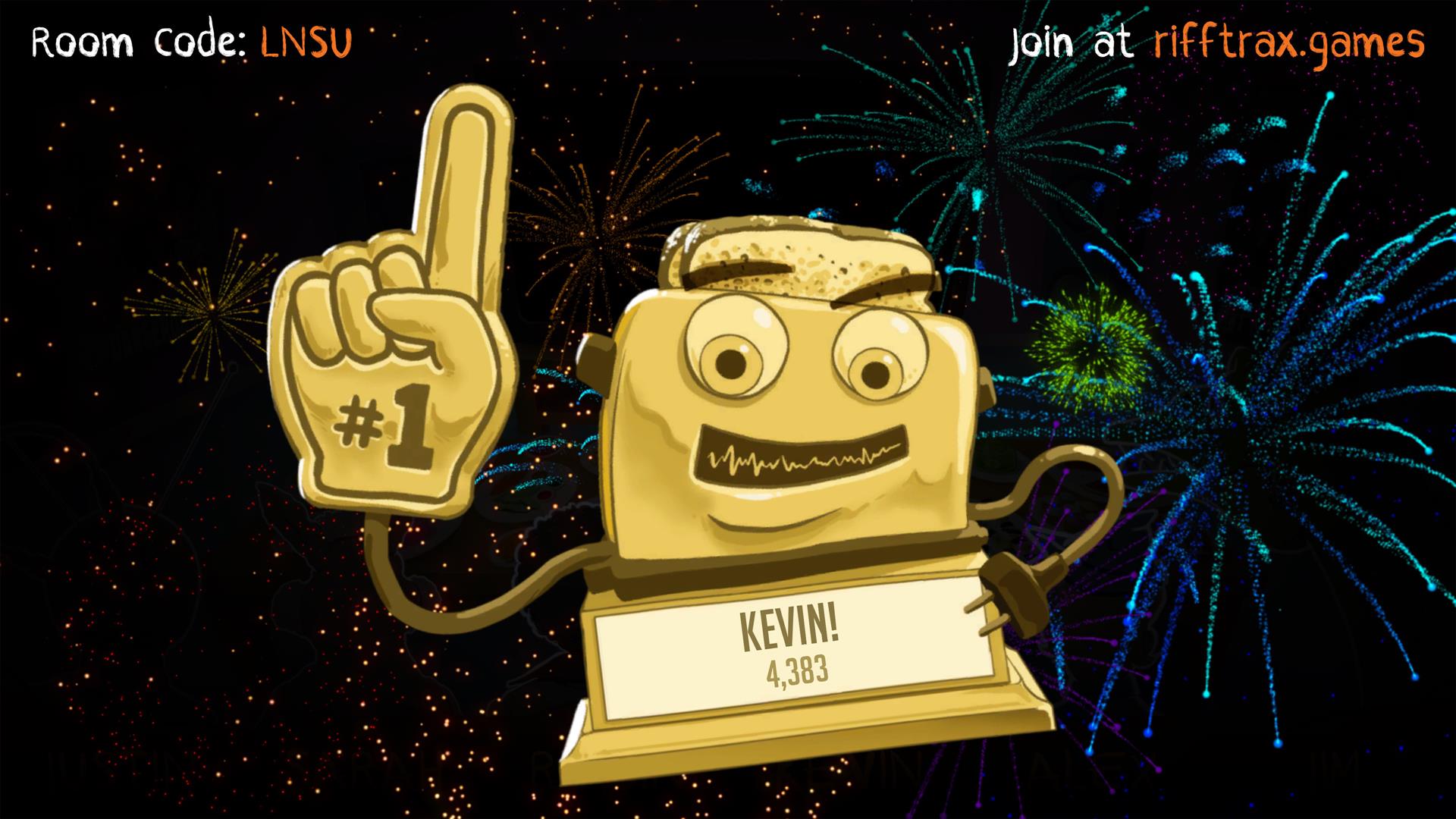 Here's the bottom line: RiffTrax: The Game costs ten dollars right out of the gate. In a few months, it will likely be down to five bucks. If you have some friends coming over that will enjoy cracking jokes and are pretty quick witted, you could do worse than picking up RiffTrax, with the knowledge that you'll get a couple of hours of fun out of it and likely never touch it again. Like I said, we did laugh. But nothing in this game is going to bring you back after a couple of rounds. If you're cool with that, and you are RiffTrax fan, then go ahead and take the plunge.

RiffTrax: The Game almost entirely relies on the quick wit of the people playing it; play with a bunch of duds and you will have a dire evening. But if you have funny friends, you can have a pretty decent time playing the "Write a Riff" mode for a few rounds. Just stay far away from the "Pick a Riff" mode, and understand that the appeal here is very limited to those that enjoy this form of entertainment already.