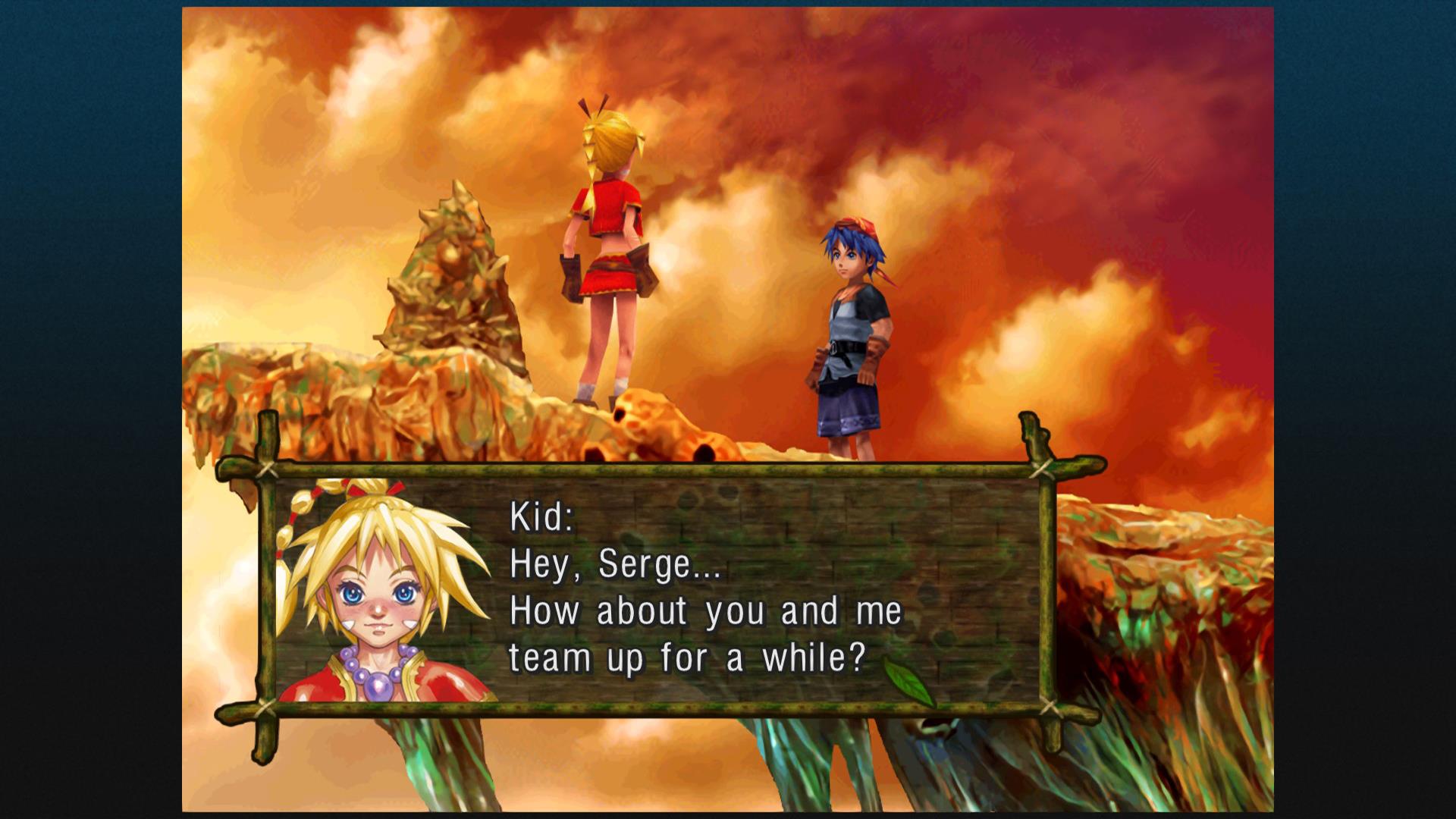 Written by Elliot Hilderbrand on 4/29/2022 for PS5
More On: CHRONO CROSS: THE RADICAL DREAMERS EDITION 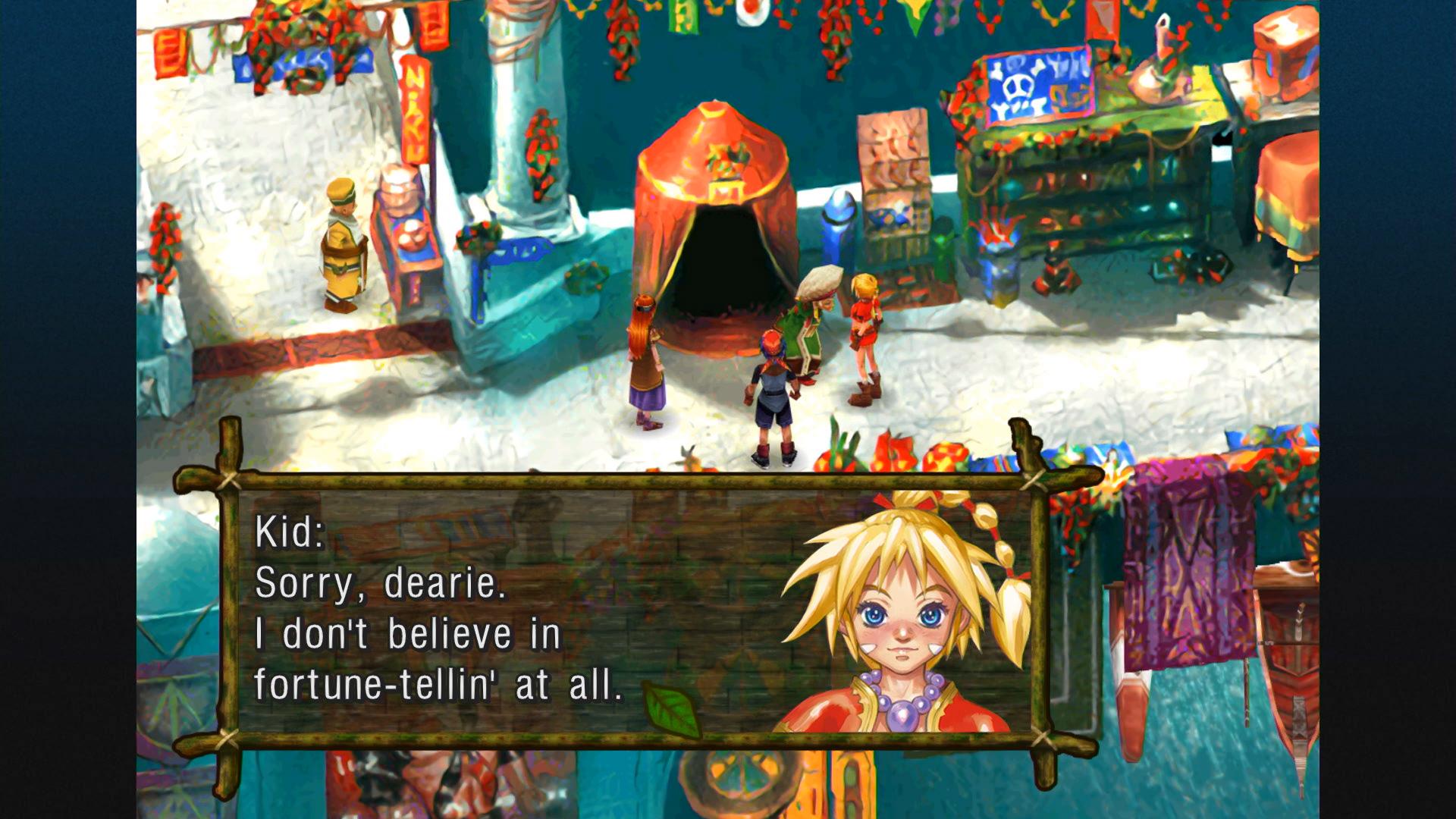 Very early on in Chrono Cross, the main character Serge finds himself in a world almost identical to his own, save one thing - him. In this new world Serge died at a young age. I was immediately swept into the plot. Sci-fi in my JRPG, yes please. But to say Chrono Cross has a confusing and convoluted story is, at times, being kind. Alternate worlds, a large cast of characters, body switching, and a super computer that’s evil are just a few plot points. I found the story easy to follow when I first began, but it did not take long for it to become a bit of a mess.

Traveling between worlds is interesting, but quickly begins to feel like a bit of a back and forth chore. Chrono Cross has too many key players to keep track of. That’s not to even mention all the villains in the story. I love a good story-driven JRPG, and I assumed this would become one of my favorites based on the amount of love this game gets on the internet, but I couldn’t do it. I became confused after about 10 hours, and eventually gave up on trying to finish it. I gave it a real go, but in the end I had enough.

It doesn’t help that there are 45 characters that you can get to join your team. I later found out you can’t even unlock all of them on your first playthrough. The worst part of that being that each character has a part to play in the game, or so I’m told. I found myself searching the internet to find which characters I absolutely needed to have on my team, or ones that just make for good party members.

Pre-rendered backdrops look fine, but play tricks on my eyes. They’re not as detailed as the character models, sometimes blurring lines that make it difficult to know what I am looking at. A few times I would struggle to find exactly where I needed to go. There would be a hole in the ground I needed to jump into, but the background made it hard to tell that was where I needed to go. I willingly would walk past chests because I couldn’t find the opening in the background to get to them. The contrast between the backgrounds and the characters was an aesthetic I did not care for. 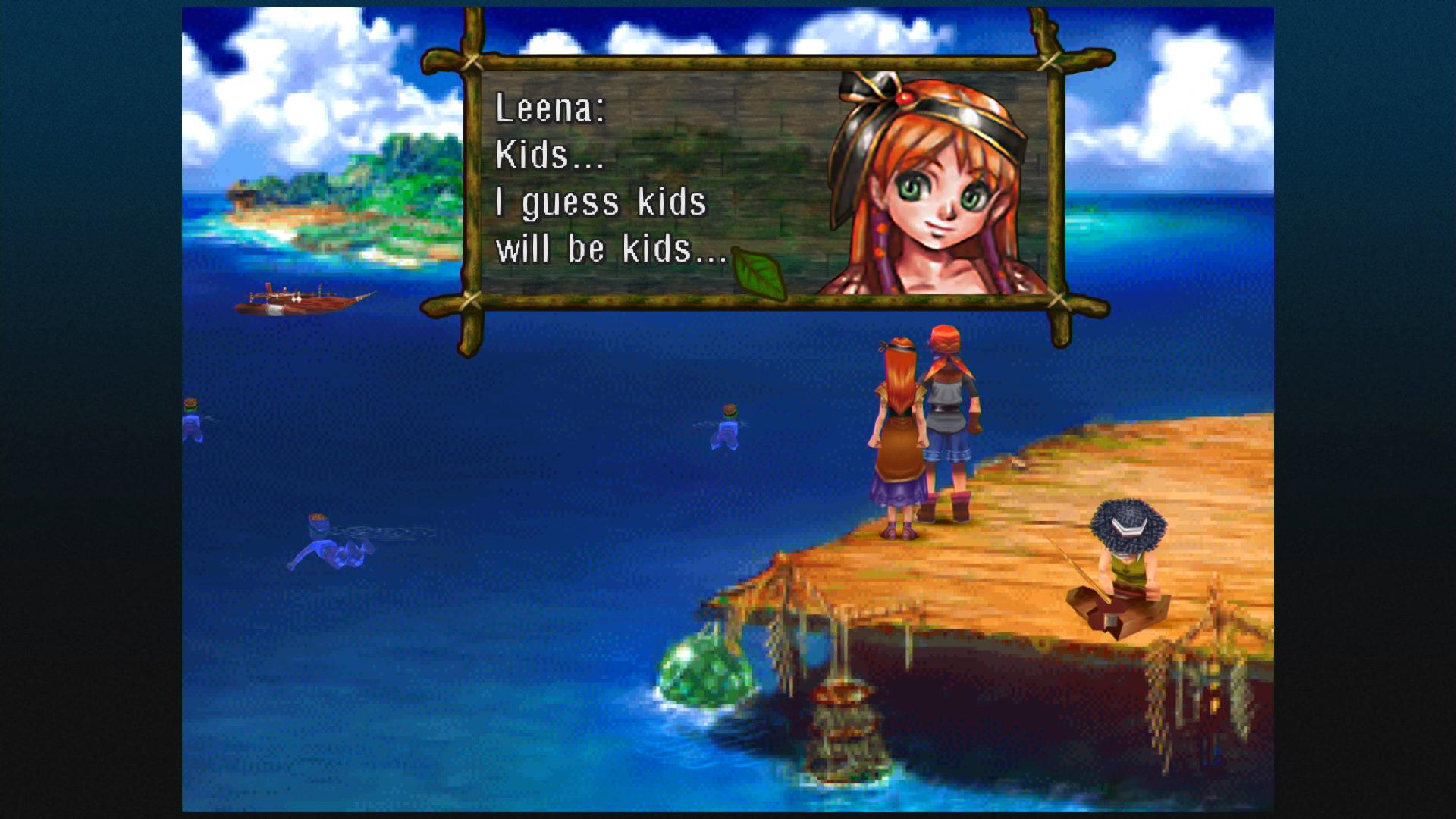 One of the few things not touched by this edition are the cutscenes. CG cutscenes maintain that quality feeling that you only get in JRPGs of the late 90s, early 2000s. They’re still a bit pixelated, having very little, if any, touch up done to them. I love it. It reminds me of coming home from school, turning on my PlayStation, and playing a JRPG. Back then it felt like cutting-edge technology; I recall thinking how great a cutscene like these looked. It doesn’t hold much water to what CG scenes look like now, but I love that nostalgic feel these scenes provide here.

While Chrono Cross is not the JRPG I excepted, Radical Dreamers was even a bit more bizarre. It’s a text based story. After playing through it and then going online to read about Radical Dreamers, I’ve found a few interesting tidbits about it. It is supposed to serve as a bridge between Chrono Cross and Chrono Trigger. Cross is a spiritual successor to Trigger, apparently Radical Dreamers has a character or two that appear in each game. Lastly, some of Radical Dreamers is not considered canon in the Chrono lore. I didn’t hate, or love Radical Dreamers, but I probably would have given up about five minutes in if I wasn’t reviewing the title. 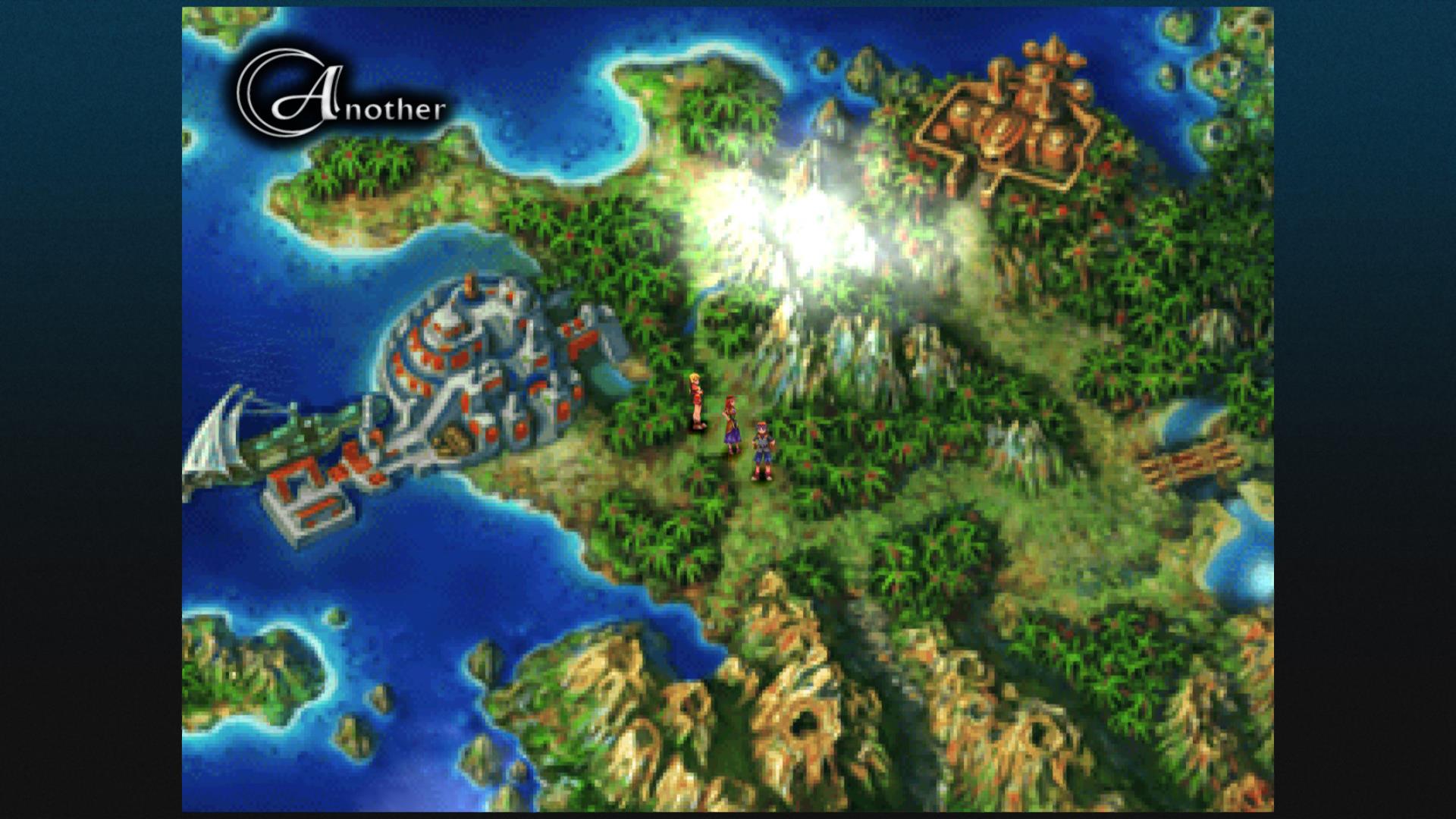 Everything is not all doom and gloom with Chrono Cross: The Radical Dreamers Edition. For starters, combat is great. Easy to understand, complex enough that, by the end, you feel you’ve mastered it. Learning how to use the elements, which color does best and where, was great. While combat is good, the music is even better. For this release the soundtrack has been re-recorded to make it sound even better. It’s grand, epic, exactly what you want in a classic JRPG. I am rarely big on the soundtrack to games, but this one stood out to me during big boss battles where the music really has a chance to be heard.

Chrono Cross: The Radical Dreamers Edition has a few tricks up its sleeve that did help with my overall enjoyment. You can speed up the game, or even slow it down. By being able to move at a faster pace I was able to cover more ground quicker. If you just want to enjoy the story, you can move quickly from crazy plot point to crazy plot point. You can also set the game to auto battle for you. The grind you may have experienced in the original title is now gone. While combat was the brightest spot for me, I left it off for most of my time playing. For what it's worth Chrono Cross: The Radical Dreamers Edition can almost play itself. 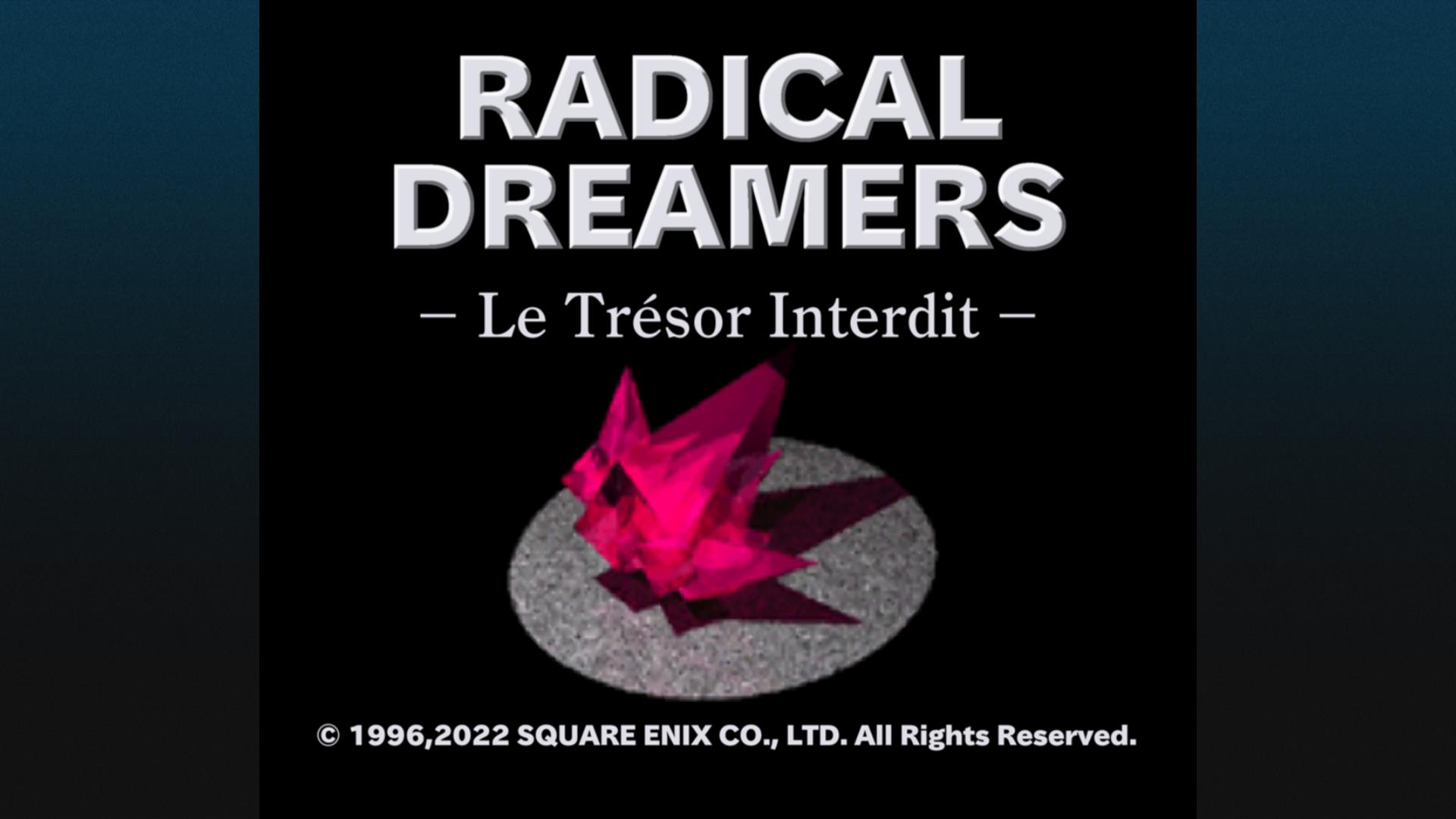 I’m not sure what it is, but I think it’s me. On paper I should be in love with this game. A classic feel, excellent music and a great combat system. But it doesn’t click for me. There is a lot to like about this version of the game too. This edition is very welcoming to new players. Speeding up the traveling, allowing creating an auto battle function, including Radical Dreamers to get the full Chrono Cross experience. But it's just not for me. I can recognize a great game, and I think Chrono Cross: The Radical Dreamers Edition is one, but it is a great game for someone else. Chrono Cross was possibly great in 1995 when it originally came out, but it doesn’t hold much water when compared to modern JRPGS.

I’m not sure what I thought I was going to get with Chrono Cross: The Radical Dreamers Edition. I thought I would be swept away in the story and taken on an adventure I wouldn’t forget. What I got was a game that feels like it is trapped in 1995. Some of that is good, solid combat, old-school CG cutscenes, excellent music. If you are new to Chrono Cross this edition is the one you want. It is beyond welcoming to new players. But there was too much holding the game back for me to make it a great game. A cast list so massive I felt bothered by it, and a story that is a bit bonkers was too much for me. Chrono Cross had to crawl so modern JRPGs could run, but it doesn’t fit in with JRPGs of today.