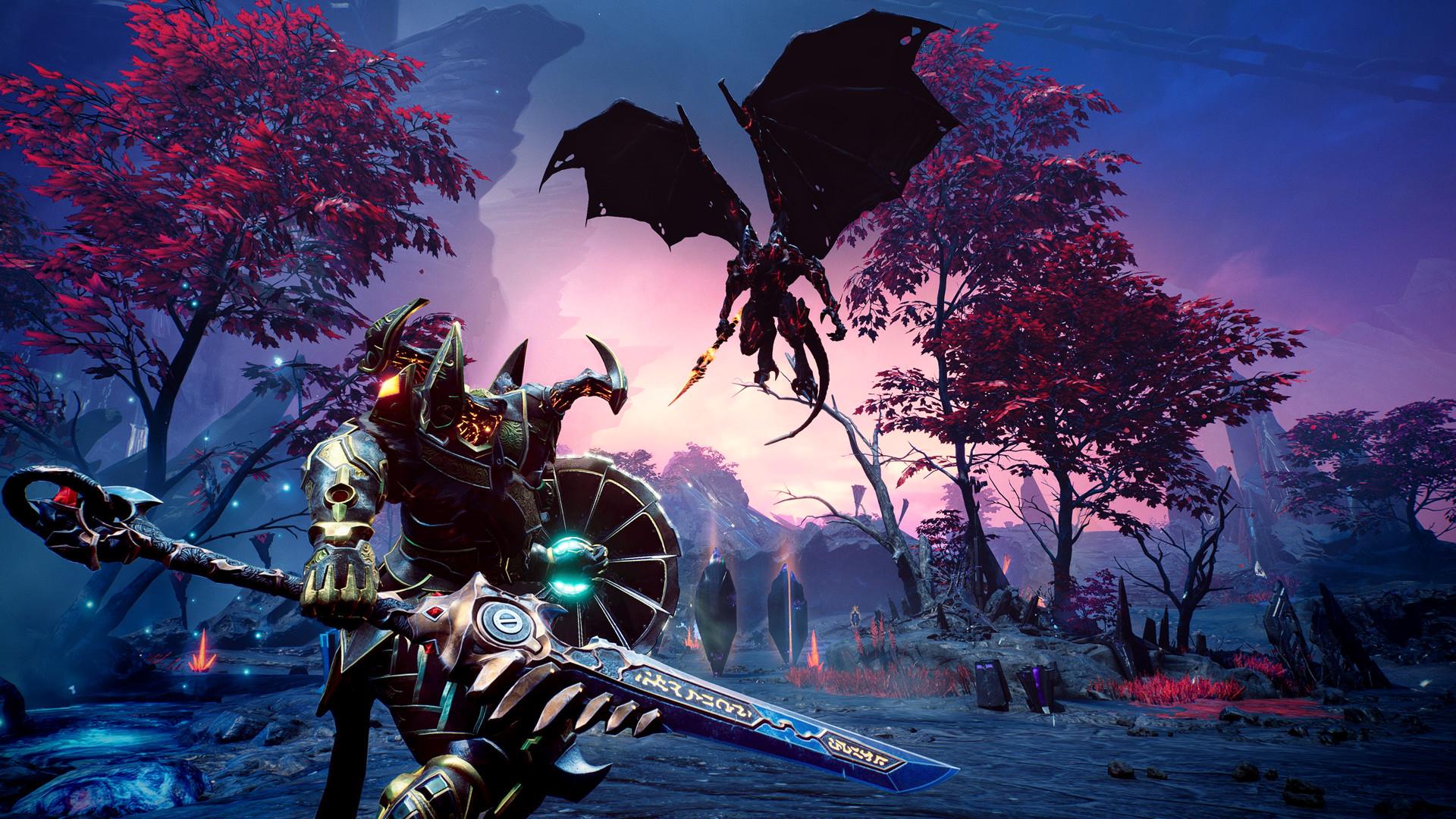 For those of you that forgot what Godfall was all about, it was announced as a launch title for the PlayStation 5 back in 2020. It is a third person, action role playing game that markets itself as the first “looter slasher” in the industry. Unfortunately, the game was extremely criticized for its nonsensical narrative, slew of bugs, technical issues, repetitive gameplay, and hefty price tag. Developer Counterplay Games has been steadily improving the game with tweaks and enhancements and has finally released an updated version of the game in an all-in-one package deemed Godfall: Ultimate Edition. The Ultimate Edition includes all the pre-order bonuses, the Fire & Darkness DLC expansion, and the all new Exalted Update which further extends the endgame content. Now the question...is Godfall worth playing now?

Not much has changed about Godfall’s story. You play as Orin, a Valorian knight that has been betrayed by his brother, Macros, who threatens the entire kingdom of Aperion as he attempts to become a god. There are a few new cutscenes in the Ultimate Edition and the ability for some allies to fight alongside you in the campaign but that’s about it. Let’s be honest here, nobody is playing this game for the story, but the effort to pad it out a little is still appreciated. 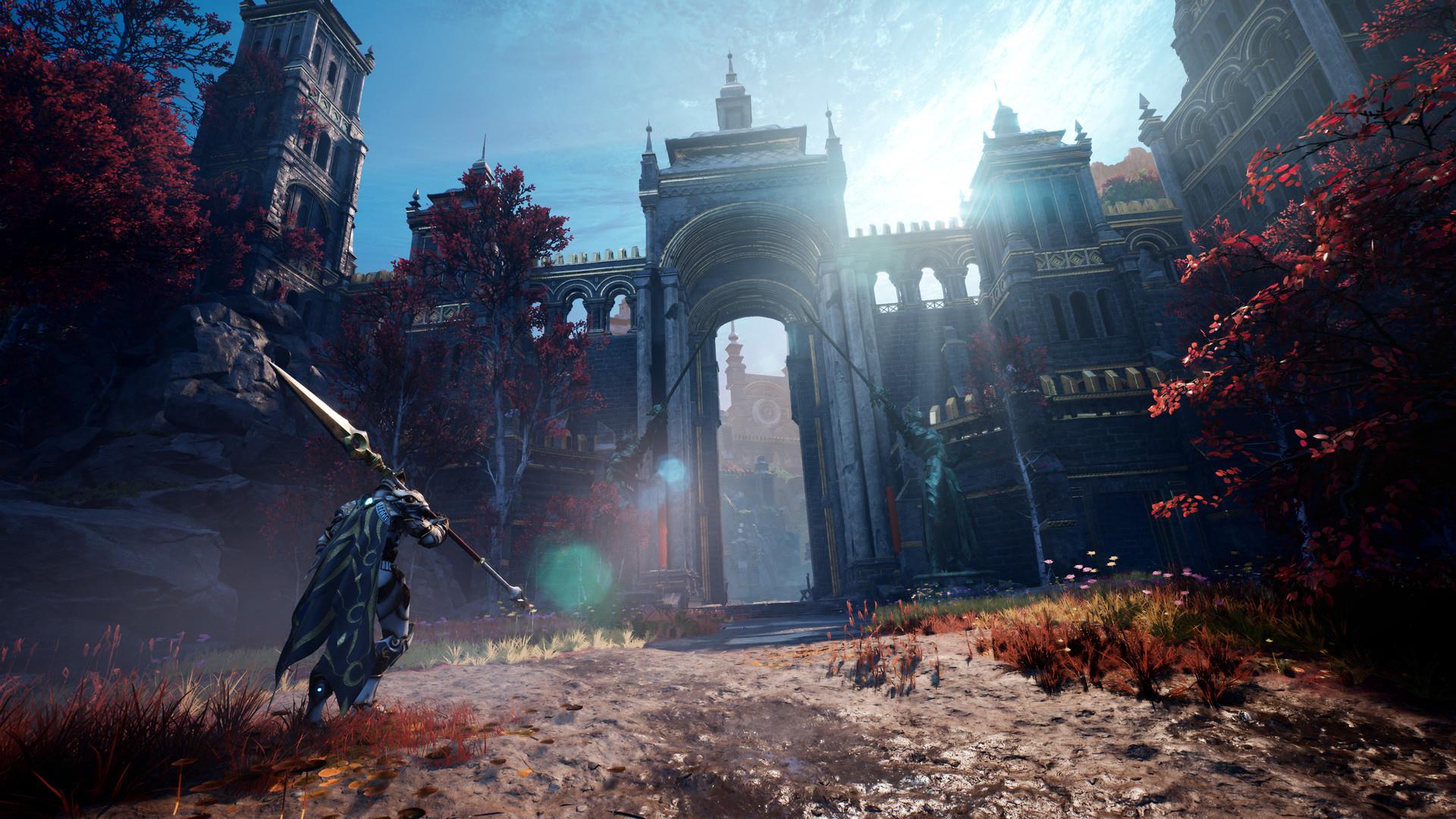 Godfall looks astonishingly beautiful, both then and now. The bright and glossy color scheme, along with the aesthetically designed valor plates and weapons make this game a visual marvel to look at. Technical issues such as stuttering and frame drops have been patched and fixed, with the game running spectacularly on the PlayStation 5. Load times are lightning fast, so nothing to complain about there - but the requirement to always have an online connection is still there, even in solo play. This was a critique for the game when it launched, and nothing has been done to address it now. You still can’t matchmake for the campaign but you can matchmake in the game’s endgame modes.

Combat is the main ebb and flow of Godfall, but it ultimately fails to deliver with its janky and clunky implementation. You have your typical light and heavy attacks, a block button, a parry, and an extensive skill tree. There are multiple weapon types, ranging from dual blades to gigantic war hammers. You have a shield as well, but it’s a blatant ripoff of Kratos’s shield from God of War. There’s no lock-on ability so a lot of the times you are swinging at nothing should you accidentally lock into an animation. This is the absolutely biggest problem with Godfall. The game features no animation canceling and you are forced into finishing the animation of whatever action you input until you finish it.  The amount of stagger you receive from getting hit makes this game an absolute chore to play, having you wait 3-4 seconds before you stand up again. You can also get stagger-locked by enemies, so every time you stand up you can get hit again, over and over. Not to mention the dodge mechanic is also inconsistent, even when upgraded. For a game that focuses so much on repetitive combat, the least you would expect is a competent implementation. There is also no real meaning for death, as bosses have health checkpoints. When you die, you can just respawn and keep hacking away until you get to the next checkpoint. 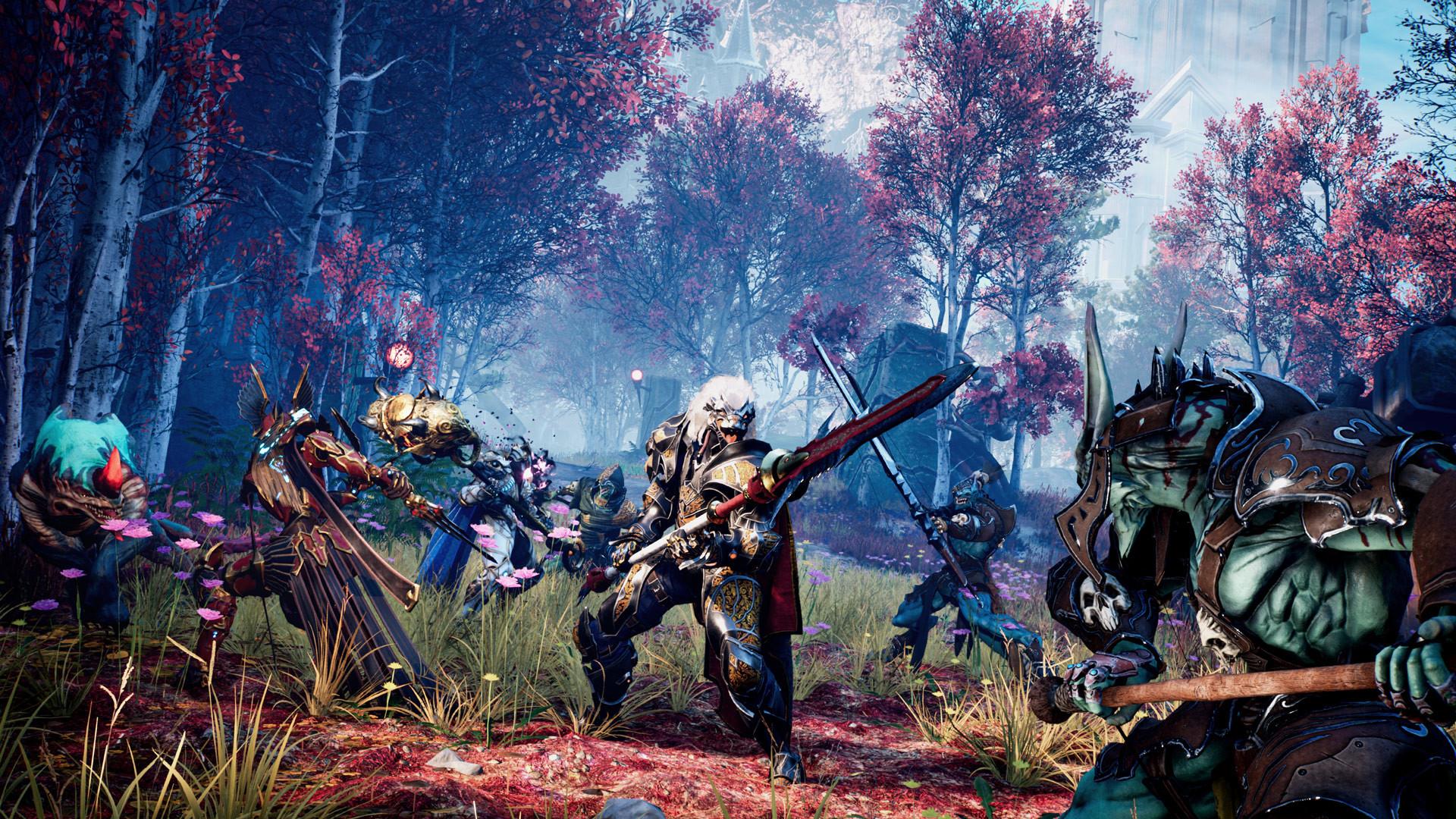 A new feature that was added in the Ultimate Edition is the option to boost your character up to level 50 so that you can skip the entire campaign and get access to the endgame content. While this option is nice to have and by no means forced upon you, it makes it more than obvious that even developers don’t think the narrative is worth trudging through and experiencing. The second biggest issue with this game is burn-out, and is another reason why Counterplay Games added this feature in. Grinding through the base game will likely burn you out by the end of it, and even more so with the repetitive nature of end-game farming. The sheer amount of content is there and it’s staggering, but a lot of it is the same thing with another color of paint slapped on.

The endgame of Godfall includes the Ascended Tower of Trials and the Spirit Realms. The Towers of Trials is an endless mode that pits you against waves of enemies that get increasingly harder until you die. The Spirit Realms mode supports up to 6 player co-op and has players going on runs to activate gates to summon minibosses. Enemies are reused with some sort of variation on them, and level design is nonexistent with the tower being a singular platform and the realm being a static arena. Different attributes can be mixed and matched to provide more variety in the type of mobs you summon but the loop ends up being more or less the same. Kill monsters, face the boss, repeat. The gameplay loop is repetitive, but the amount of loot you receive and the ability to theory craft character builds is impressive. The game can be seen as min-maxers dream! 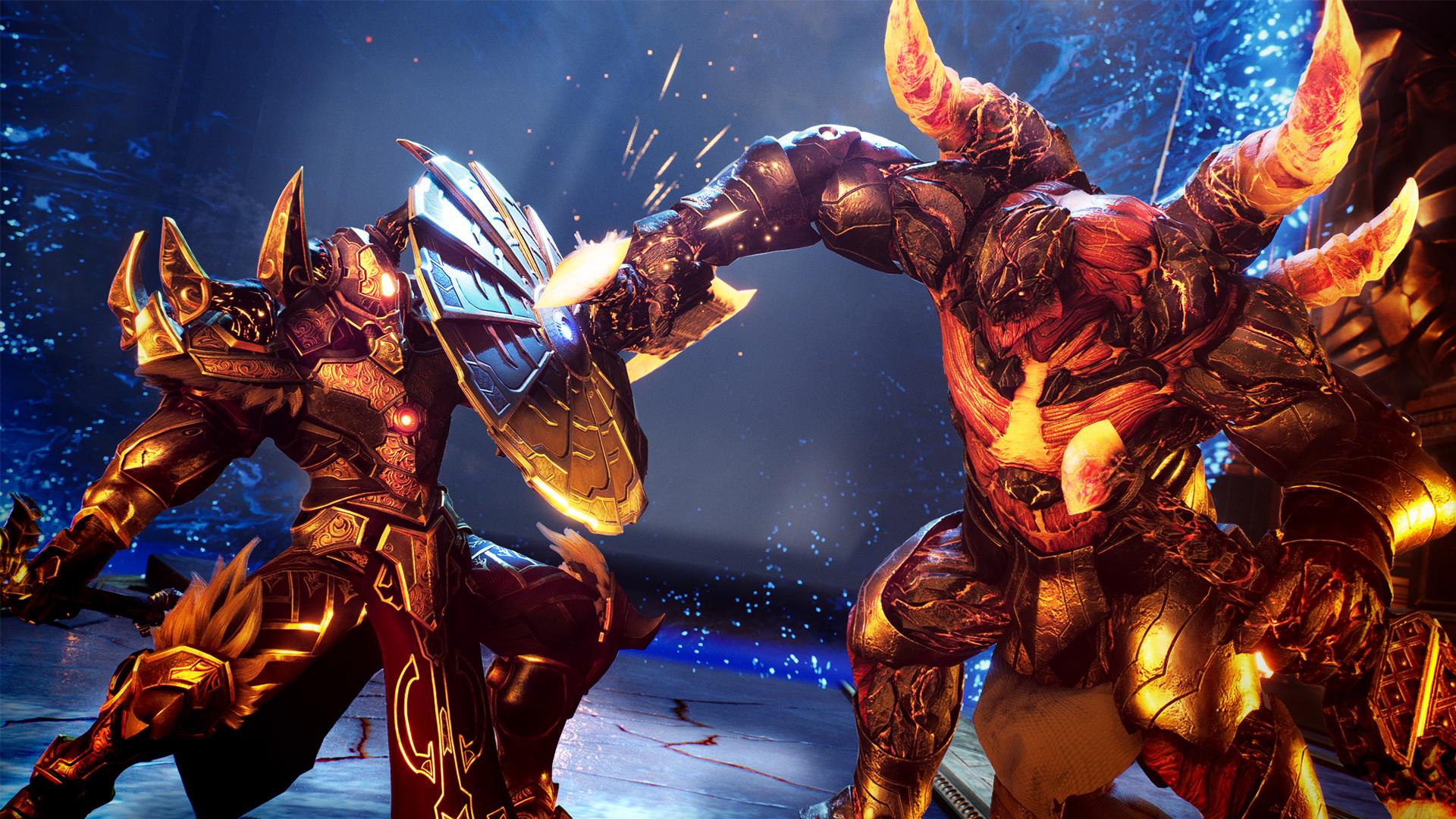 There are many quality of life updates that have not been addressed and I am not sure if they ever will be. There is still no minimap provided and the Spirit Vision mechanic is still buggy to the point where it doesn’t always point you in the direction to go. The uninspired level design makes matters worse as every corner you turn looks the same. Objective markers are not clearly stated and the only way to exit out of a free-roam mission is to “Abandon Mission”, which clearly warns you that you will lose all of your mission progress if you do so. These are very simple fixes and it’s odd why they were never addressed.

It is without a doubt that Godfall: Ultimate Edition addresses many of the concerns and issues players had with the base game when it first launched. More specifically, the endgame content, which is what a game of this nature is all about, has been fleshed out and expanded. However, many of the game’s core issues, many of which cannot be fixed without a complete overhaul of the gameplay system and loop, remain, such as janky combat and repetitive level design. That being said, Godfall: Ultimate Edition is worth taking a look at for those that are interested, especially with the more than reasonable price point at $29.99 compared to the base game that was $69.99 at launch.

Counterplay Games did a commendable job enhancing, tweaking, and extending Godfall into one complete package. The core issues are still there though, with poorly implemented combat, boring narrative, and endless grind. But for the amount of content you are getting at a finally reasonable price-point, it's worth a try for those that are into the looter genre. At least it's pretty!