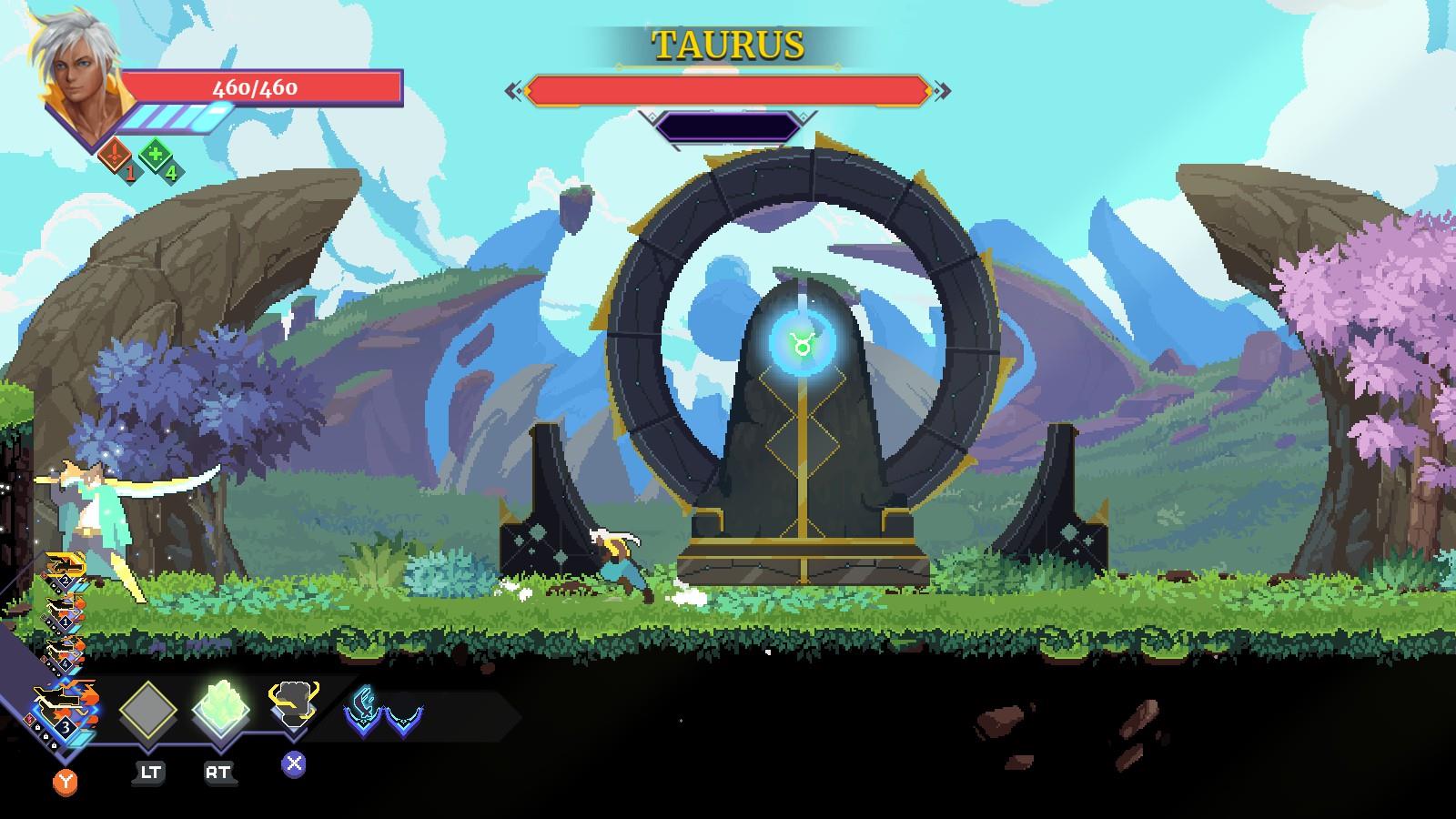 Written by Russell Archey on 5/2/2022 for PC
More On: Astral Ascent

There are a couple types of games I am a sucker for.  While I’ll usually jump at the chance to play a new indie platformer, a while back I played a game called Vertical Drop Heroes.  The game is described as a “procedural platformer RPG hybrid with roguelike elements”.  Basically what that translates into is you play the game, gain experience and upgrades, die, and then repeat the process with some of your improvements, through which you can proceed further.  Lather, rinse, and repeat.  Since then I’ve played a few other similar games, and today I’m taking a look at Astral Ascent - another such game in Steam Early Access with an interesting premise behind the story.

You begin Astral Ascent as Ayla, one of several people plucked from their lives and plopped into a utopian-like garden.  The Garden may look nice but it’s actually a prison run by twelve guardians known as the Zodiacs.  Your goal is to escape your prison by making your way through several worlds guarded by the Zodiacs, but that’s easier said than done.  You begin each escape attempt with four spells along with a basic attack and a dodge that renders you invulnerable during its execution.  After each area you will have a choice between two or three types of area to go to next, with their difficulty shown in the number of stars you will collect when you choose that area.  These can be areas that give you various rewards or let you spend resources on temporary upgrades and spells.  Inevitably though you will die and be sent back to The Garden. 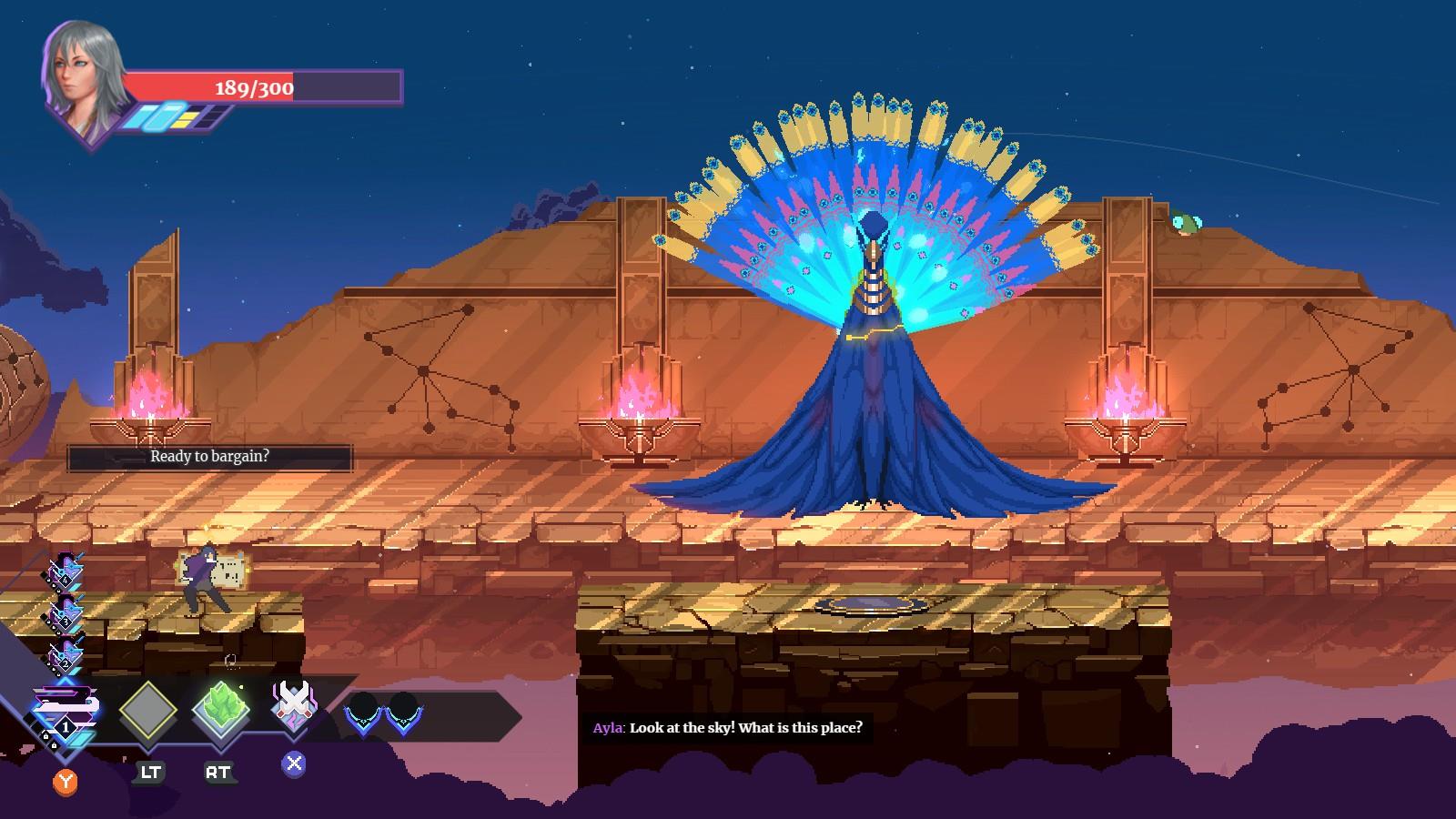 After you’ve attempted to escape The Garden once and failed, you’ll begin learning more about the other inhabitants, a.k.a. the NPCs that give you your permanent character improvements.  When you die you’ll lose any temporary upgrades you had, but you’ll also gain experience that you can use to unlock permanent upgrades, like new spells to acquire during an escape and improvements to maximum health and mana.  As you unlock these upgrades and hone your skills just by playing, you’ll begin to get further and further into the world. While you begin the game as Ayla, you’ll unlock three other characters along the way - including a character named Kiran who you unlock at the start, and two others you’ll unlock as you go. Each character has their own unique spells you can unlock from the Peddler in the Garden by spending experience points, giving you some unique customization options and ways to play.

When you first start your escape attempts, the choices at the end of each area will be limited to only two or three types of rooms, typically either combat rooms which give you Astral Keys used to open large chests, or Quartz - which is a resource you can spend in some areas.  Once you’ve made a couple attempts you’ll begin to see more area choices, like the Poetic Peddler who allows you to spend Quartz on new spells, and Andromeda’s Bar to spend stars on temporary upgrades. Much like previous, similar games in the genre, the more times you play the more things you’ll unlock to help you in your quest to escape. 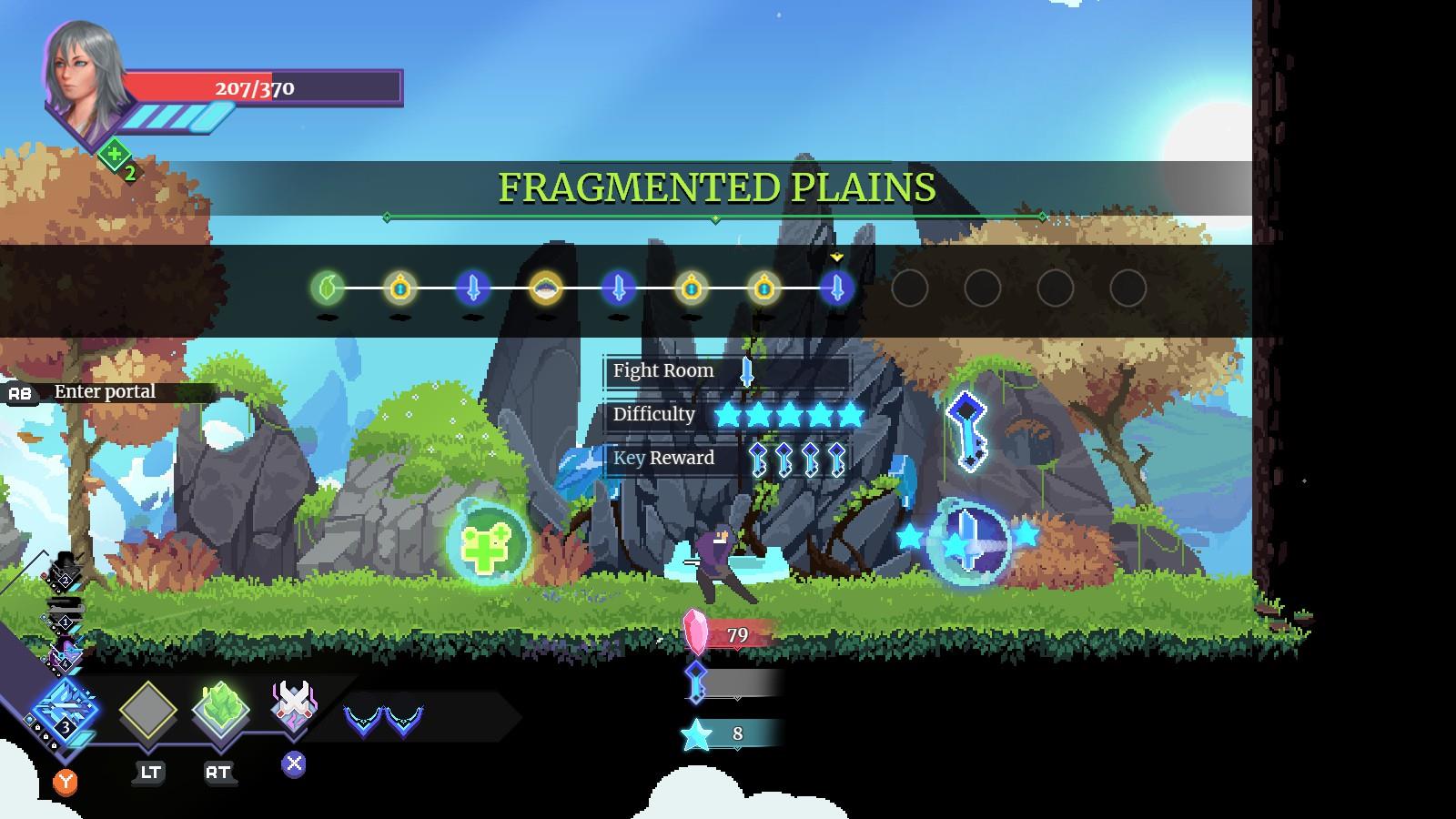 While Astral Ascent is currently in Early Access it does play pretty well. The controls are tight, and the mechanics are fairly solid for the most part. The dash has a slight cool down period so you cannot just spam invulnerability left and right, meaning you must use it strategically, so you don’t just dash in an attack. Holding down the basic attack button allows you to continuously attack without mashing the button and helps to take out airborne enemies.

As for the spells, while you start each escape attempt with four of the same spell, you can find more to replace them along the way, with each having a spell level and at least one Gambit slot open to give that spell more abilities you will find. You must use each spell slot before they will refresh and you must have mana to cast spells, though if you get in a few normal hits to restore it, mana is typically not an issue.  My one complaint about the controls comes from jumping, as you have a set jump height no matter how long you hold the button down. This can make taking on some airborne enemies a little frustrating as they may hover in a spot where you cannot hit them from the ground but jumping to attack them will make you jump over them, and you must attack them on your way back down. 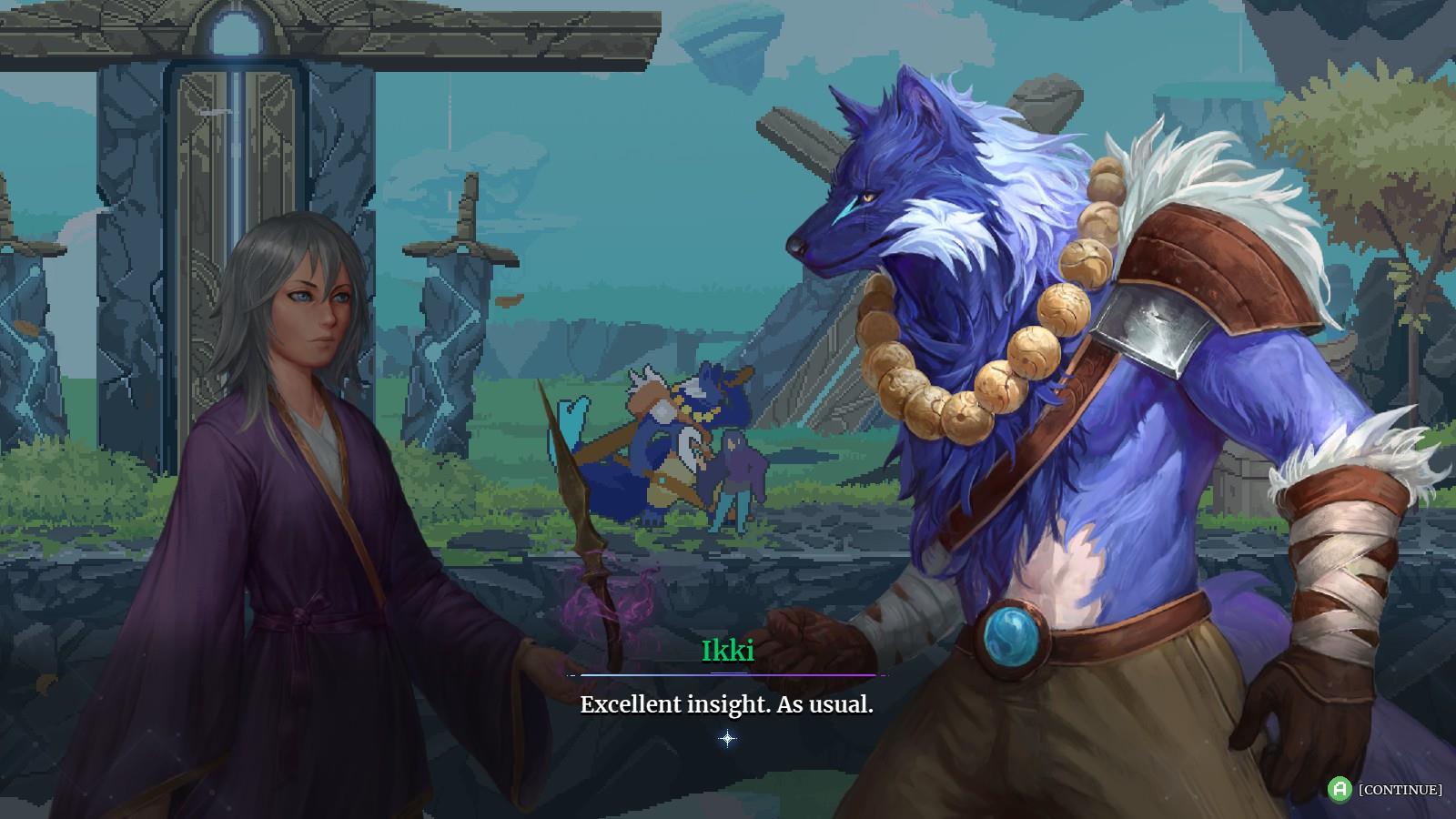 Along with how well the game looks, the characters are fully voiced and really well done. Most of the characters will give you the option to talk to them, usually when first meeting them to kind of give you an introduction to who they are and their purpose in The Garden, but often times after returning from an escape attempt. This not only lets you learn more information about that character, but also give you a bit more depth to Astral Ascent’s story and just a chance to relax a bit between attempts. Some people like to just get straight to the action while others like taking in a bit of the story. Aside from your first few escape attempts where you are immediately told about a new NPC you can meet, you have the choice to go meet with the NPCs and learn more about them, or just get straight back to the action.

While Astral Ascent is still in Early Access, it looks and feels solid so far. It can be a bit slow to get going as early on you may not make it too far into the first world before biting the dust, meaning you have very few experience points to spend on upgrades. During your escape attempts you will occasionally come across a choice of three stones to give you a temporary upgrade to your max life, attack power, and attack speed (the same three choice you will find at Andromeda’s Bar). Early on I would choose the life boost whenever I could and for the permanent upgrades in The Garden. Any permanent upgrades you unlock are shared among all playable characters, so if you have been playing as Ayla for a while and obtained a few upgrades but want to try Kiran, you can swap to him without losing your progress. Since each character has their own spells I do recommend trying them out when possible. This lets you get a feel for each character and their unique spells to see who you like playing as most. 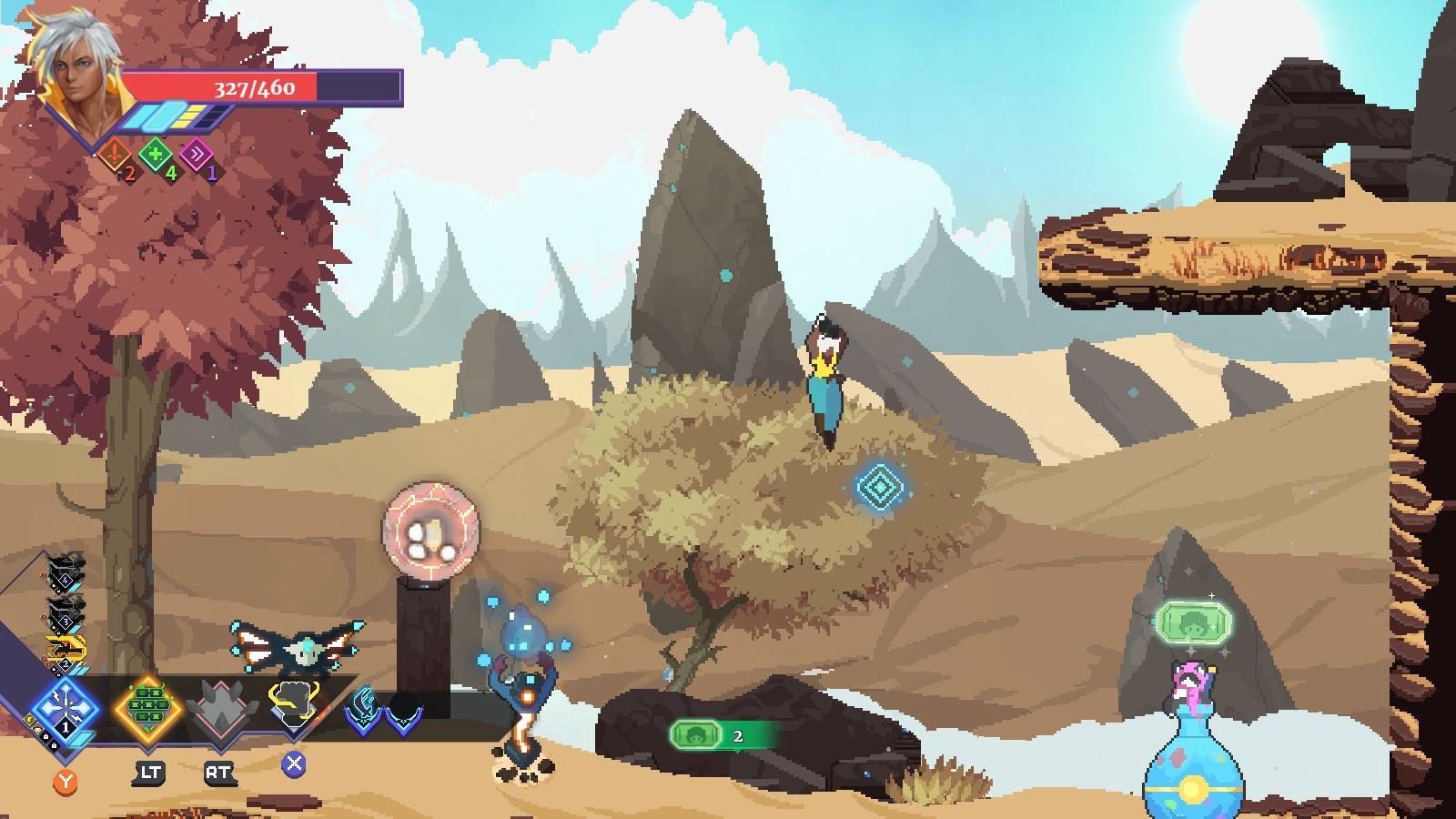 Overall Astral Ascent is enjoyable if you like these types of games. The look of The Garden and each world is great, the controls are responsive and fluid (attacking while jumping aside), and there is no denying that there is a lot of replayability. As Astral Ascent is currently in Early Access things can change between now and a final release, but the core of the game is solid and I am definitely looking forward to whatever Hibernian Workshop does with it. If the game feels this polished now, imagine what they can do between now and whenever they decided to do a full launch.