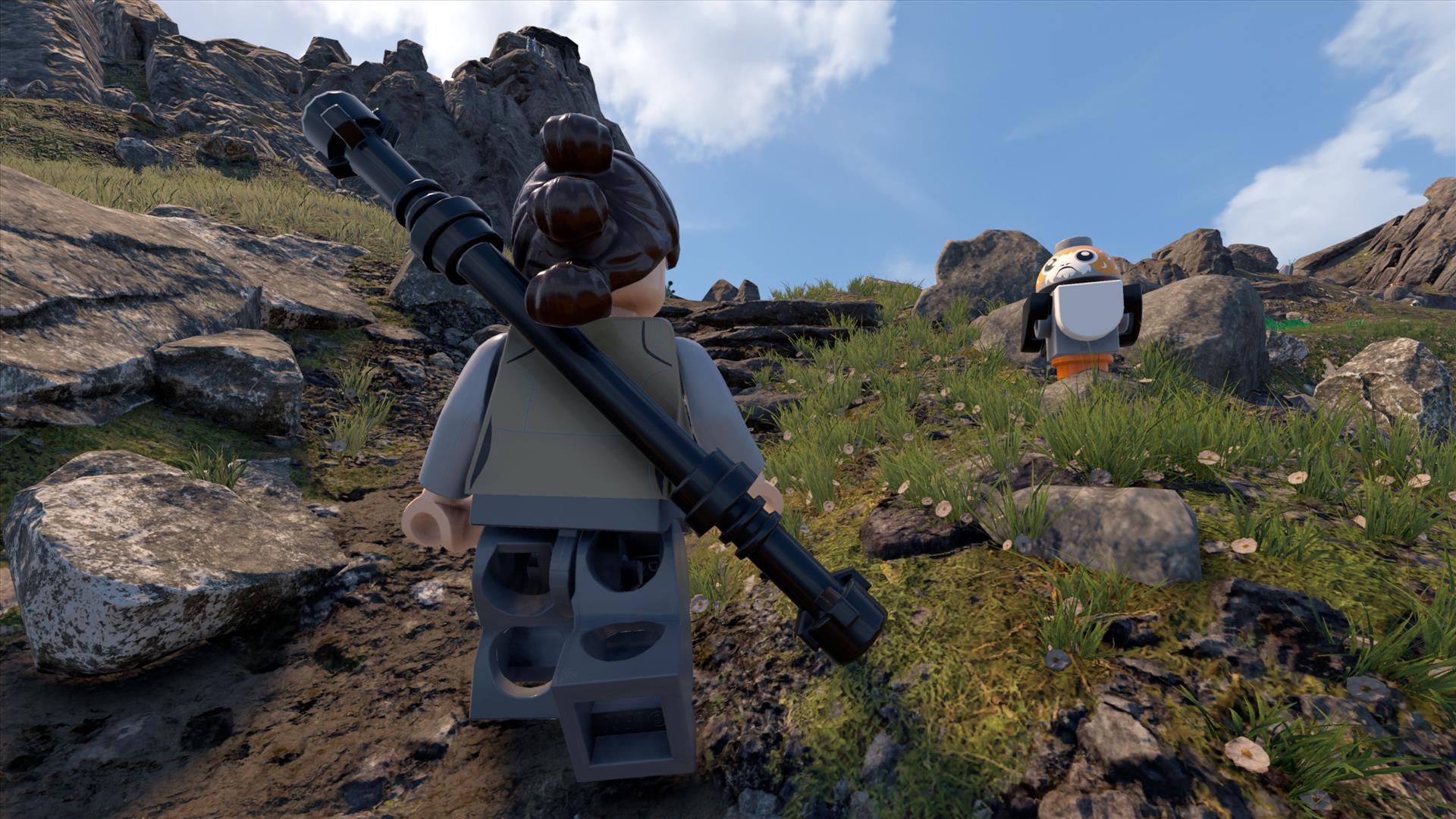 Written by Eric Hauter on 4/9/2022 for SWI
More On: Lego Star Wars: The Skywalker Saga

I’m still not done with Lego Star Wars: The Skywalker Saga. I’m not sure I will ever be. Sure, I’ve run through the film-based storyline levels, and I’ve spent some time messing around with the open world, but like most Lego games, this is a game that I’m going to come back to again and again as the years go by. While I’m not super happy that I’ve played The Skywalker Saga on Switch, one upside of that arrangement is that I’ll be able to keep the game handy so I can pull it out whenever I feel the urge for a bit of happiness and light. Heck, I’m still playing Lego City Undercover, and that game is almost ten years old.

Of course, TT Games’ Lego titles have evolved significantly over the years. What started as fun, linear romps through the familiar storylines of beloved franchises have become sprawling open-world epics, with so much content and ways to engage that I shudder to contemplate the final hour count a completionist player might put in. A quick trip to “How Long To Beat” shows a completionist run at around 40 hours. I call shenanigans. I spent five hours dorking around with the first story world alone, not coming close to completing everything, and there are nine of those.

I’ve long been on record saying (as often as I could, in every relevant context) that Lego Star Wars: The Force Awakens is the best Star Wars video game ever made. I still strongly believe that every Star Wars fan should experience that game, but the folks at TT Games have completely outdone themselves with this release, which is richer, deeper, funnier, and much more satisfying than anything that has come before. While The Force Awakens was a very deep vertical slice of that moment in Star Wars history, The Skywalker Saga smashes open the entire franchise like a watermelon, sending pieces sloshing in every direction. It’s huge, messy, and glorious all at the same time. 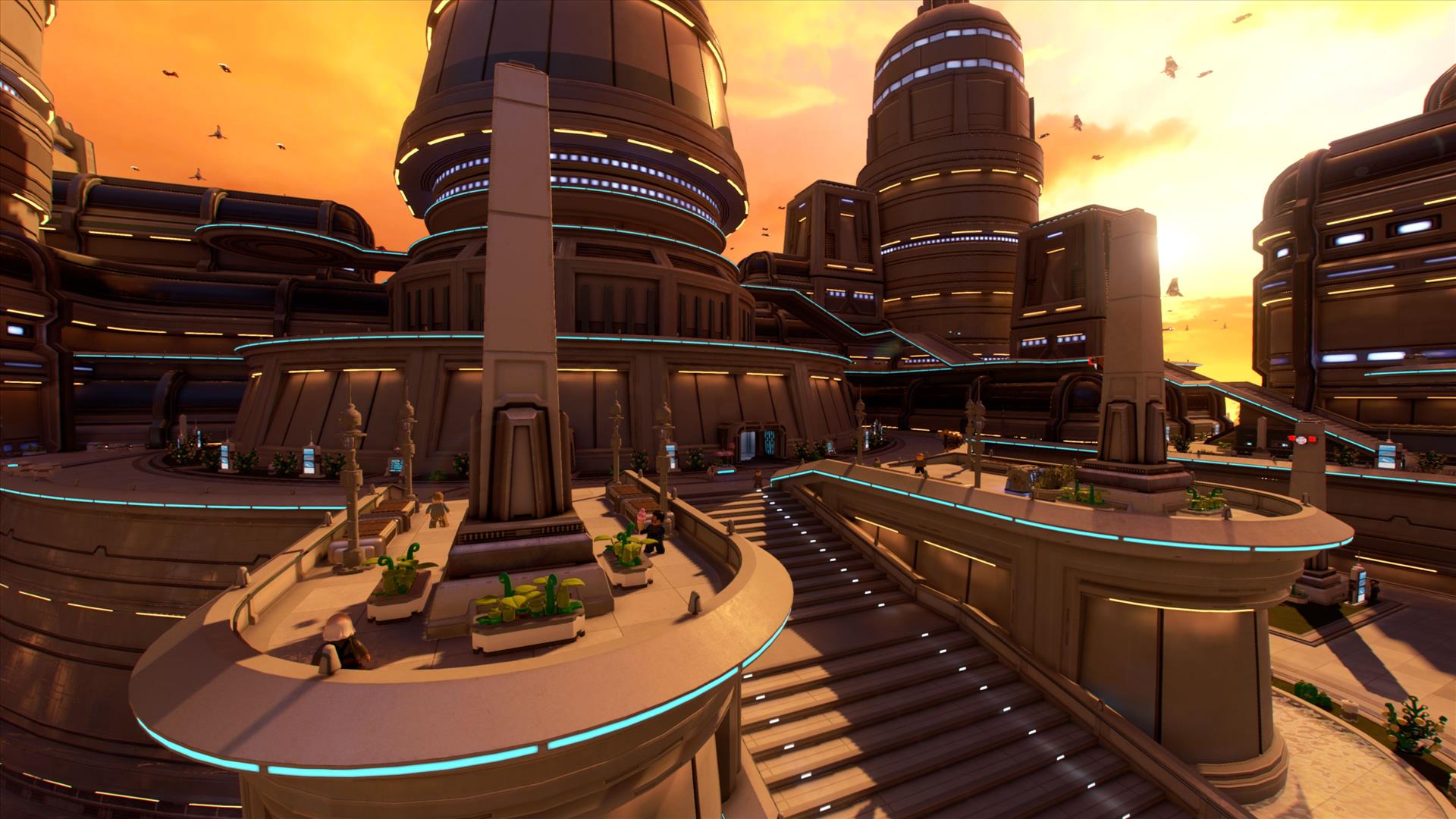 After playing The Skywalker Saga, the reasons for the game’s multiple delays become quickly apparent. It's almost as though a dark overlord was looming over the production of The Skywalker Saga, directing the developers to go bigger, give more, and include all the things. Which characters should we include? “ALL OF THEM!”. Which planets should we allow players to explore? “ALL OF THEM!”. What if someone just wants to spend a couple of hours riding a Dewback around Tatooine? “LET THEM, YOU FOOL!”.

The open-ended nature of The Skywalker Saga allows players to engage with it however they want. If you want to just rocket though the storyline for each of the nine primary films, you absolutely can, and you’ll have a great time. If you want to wander off the beaten path in the middle of the story and hunt down secrets on the forest moon of Endor, that’s no problem, the Ewoks will be waiting for you right where you left them when you decide to meander back. Do you want to spend the next five years dipping in and out of the game, collecting characters and ships for no reason other than the sheer joy of doing so? Do it!

Every aspect of The Skywalker Saga is built to allow players to do whatever the heck they want. The newly deepened melee combat system allows for both button mashing and insane combos. Playing as a Jedi or a Sith, you can pick stuff up with the Force and hurl it into enemies, or just wade into a group with your lightsaber and wreck shop. Every moment of the game has been finely tuned to keep the player amused and entertained, no matter how they choose to play it. 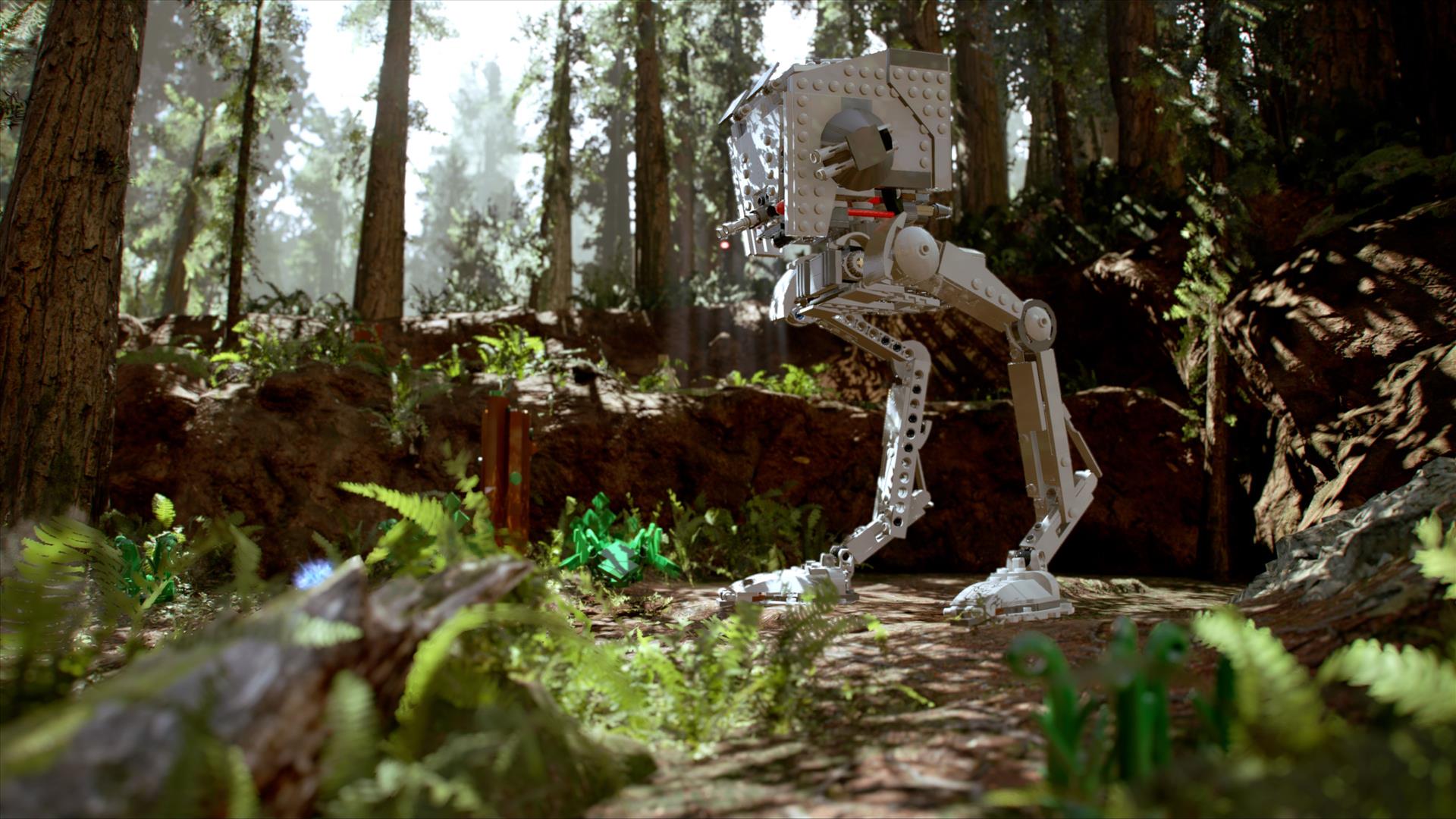 The Skywalker Saga still includes a lot of what players love about the franchise. You will still be solving puzzles, searching for mini-kits, and collecting hundreds of thousands of studs to unlock new characters and ships. There is enough familiar territory here that franchise fans will feel right at home. But some things have indeed changed, mostly in service of bringing the game into the modern era.

The camera, which in previous games hovered over the player, now sits behind the player characters’ shoulder, giving the game a more immediate feel. Combat has been deepened to become much more satisfying than the old “mash on X” ways of yore. Now there are a ton of cool combos to discover, and while mashing works to an extent, jamming on the same button endlessly will eventually result in your attacks being blocked, forcing you to change it up a bit. Now you need to button mash with multiple buttons.

Even the shooting has been reworked for a more Gears-like approach to ranged combat, having players duck behind cover, moving from place to place to gain advantageous angles. I knew that a lot of this stuff was happening, but playing the game, it’s shocking how clean it all it. There are several games’ worth of new systems in The Skywalker Saga, and they all just kinda…work. 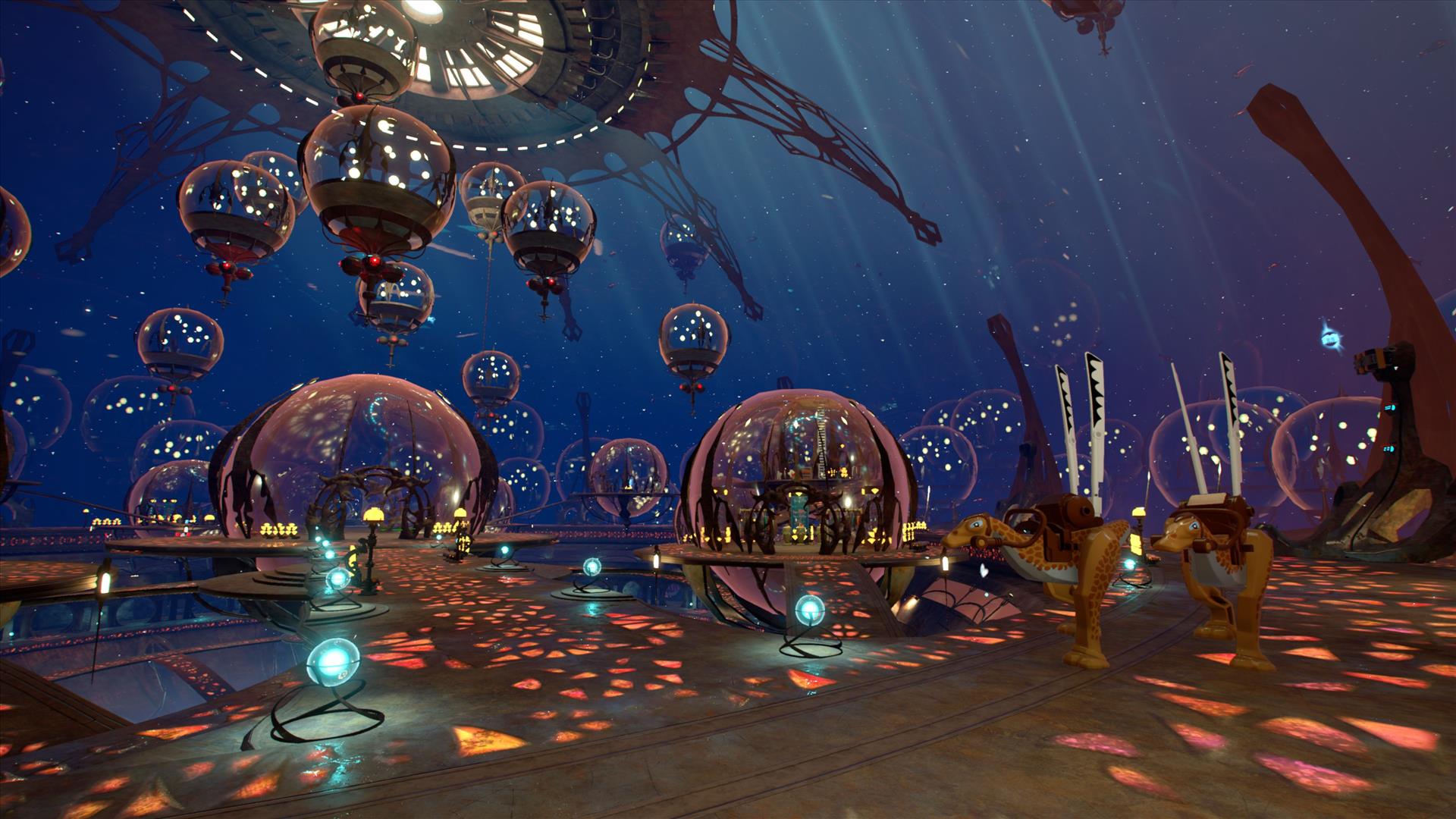 The story segments are tight and sharp, delivering the broad humor the series is known for to keep the kids giggling, while working in some pretty great zingers for the adults. Each film takes about three hours to get through (if you don’t poke around), focusing on the good stuff you love and remember best, while glossing over the more dialogue-heavy segments.

Speaking of dialogue, the game seems to include a mix of original film recordings and sound-alike voice work, which blends seamlessly to create a fantastic new soundscape. That said, the voice work on some of the side characters and quest givers is of extremely questionable quality, much of it sounding like placeholder clips that were recorded by the dev team and then never replaced. Those sound clips are some of the few pieces of the game that don’t squeak from an amazing amount of polish.

The side quests themselves can be attacked during the story play-through or returned to later in open play. I would recommend not getting super bogged down with them during your initial run, as much of the content starts to run together and is best left for later exploration when you can turn your mind off and just dork around. Stick to the rails when running through the story, grabbing stuff you see but not going too far off the beaten path. The films are best experienced as tight experiences, which keep the jokes flowing. 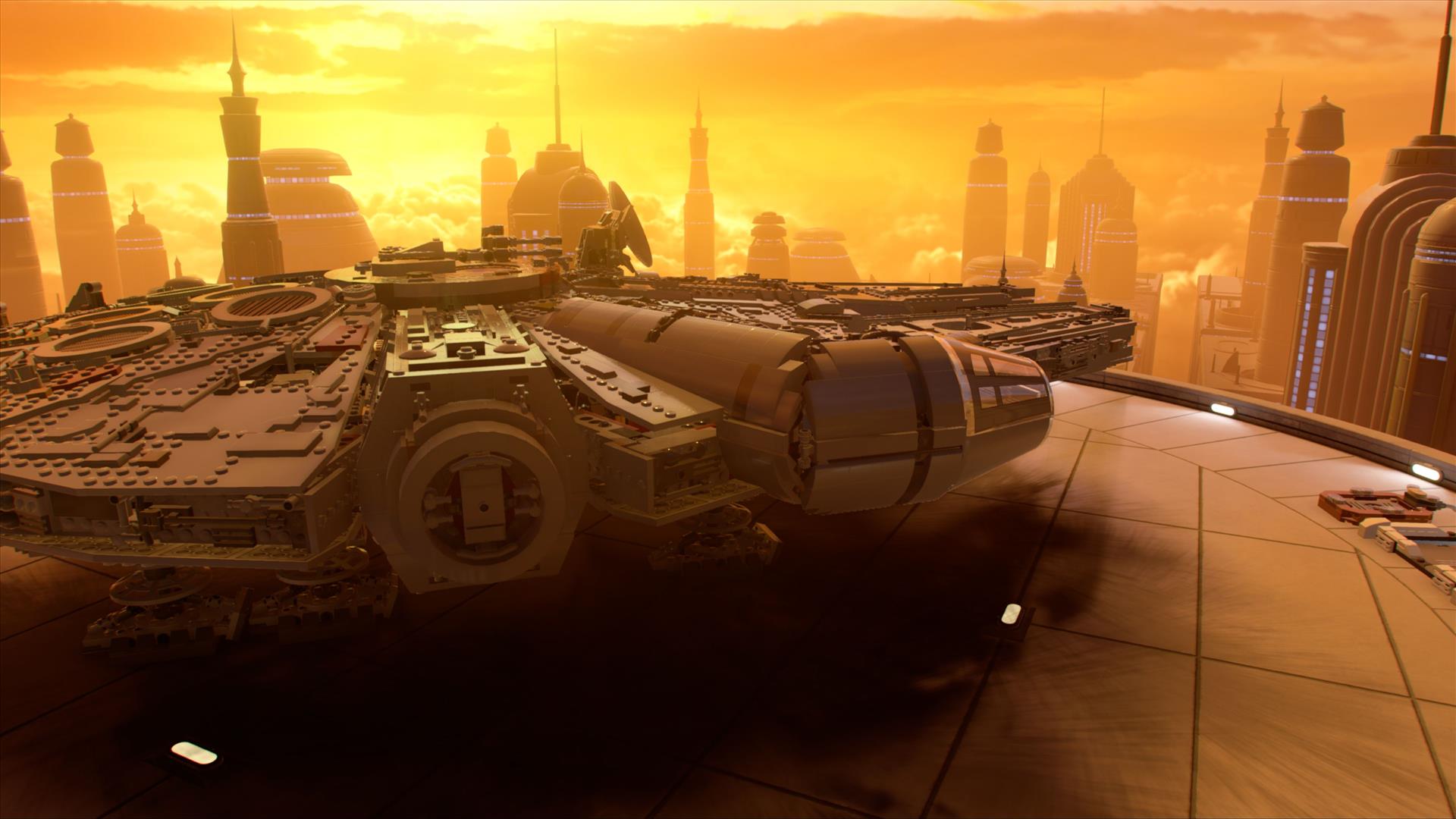 I mentioned above that I’m not 100% satisfied with The Skywalker Saga’s performance on the Nintendo Switch. This is more due to the limitations of Nintendo’s handheld than any issues that are the fault of TT Games. The resolution and clarity of the visuals is far less than what I’ve become accustomed to on current gen systems, and the framerate dips occasionally – not to horrible levels, but enough to be noticeable. Strangely, the game seems to have a hard time with cut scenes, which chug more than regular gameplay. Load times for levels are not great. More than anything, the game just doesn’t seem to shine in quite the way I want it to, as the Switch just can’t handle things like modern lighting. For the most part, the version is acceptable, but playing on Switch does make me feel like I’m missing out on something that is probably spectacular on newer consoles or a high-end PC.

Still, the creativity and love that TT Games put into Lego Star Wars: The Skywalker Saga comes shining through in every level. Though Switch might be limited, the game still delivers some pretty stunning moments of beauty - and you can't help but be in awe when you see giant capital ships, knowing that the developers really constructed the entire things out of virtual Lego. This is a fantastic way to revisit a beloved property, and it’s absolutely stunning that TT Games was able to take a fresh swipe at this entire property, taking another pass with all new jokes, puzzles, and an entirely new system of play. Nothing here feels old or recycled – the entire game is fresh and new. When that fanfare kicks in at the start of each film level, I can’t help but get excited to see what cool stuff TT Games is going to put in front of me.

The word “epic” gets thrown around an awful lot when discussing video games, but The Skywalker Saga actually feels epic in every sense of the word. TT Games understands Star Wars like few other developers, and they know what players want to see and do. That they were able to provide the goods in such abundance speaks to an unmeasurable level of dedication.

Lego Star Wars: The Skywalker Saga is impressive in every sense. From the tight, scripted story gameplay to the sprawling open world, every piece of this game feels lovingly crafted. While the Switch version feels a bit dated, that’s not the fault of the developer, which squeezed an impressive performance from Nintendo’s handheld. This is a game with enough fresh content to keep players coming back for years to come.