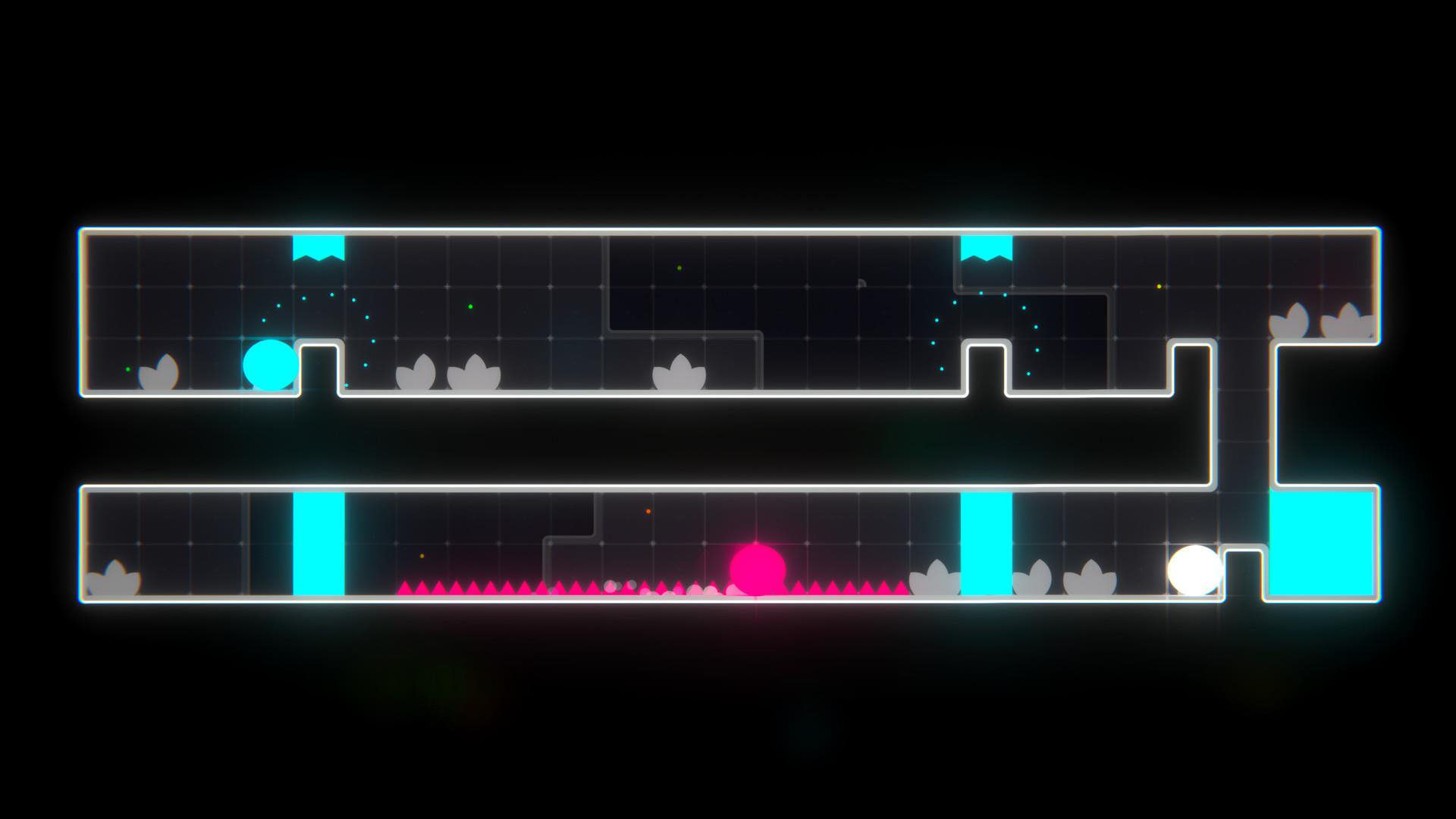 Oh Kombinera. I'm 44 years old. I used to play - and enjoy - Pac-Man for the Atari 2600. I currently have an entire shoebox filled with Atari 2600 carts. I could lose over and over playing these games and never stop playing them. Space Invaders, Combat, Adventure, and even the Activision games would wreck me. The arcade games ported onto the system did the same number on me. High scores in Centipede, Missile Command, and even that ridiculous Crystal Castles took all my money. To me, it wasn't about the high scores, it was how much further I could get with the next quarter. In those classic games, the further you got, the more difficult the game became. Atari is back now, and they've been releasing recharged versions of their old classics on consoles, and their newest console, the Atari VCS. Their latest release is a puzzle game called Kombinera, released on pretty much everything. I am here to tell you, it is difficult, in the best and most challenging way possible. 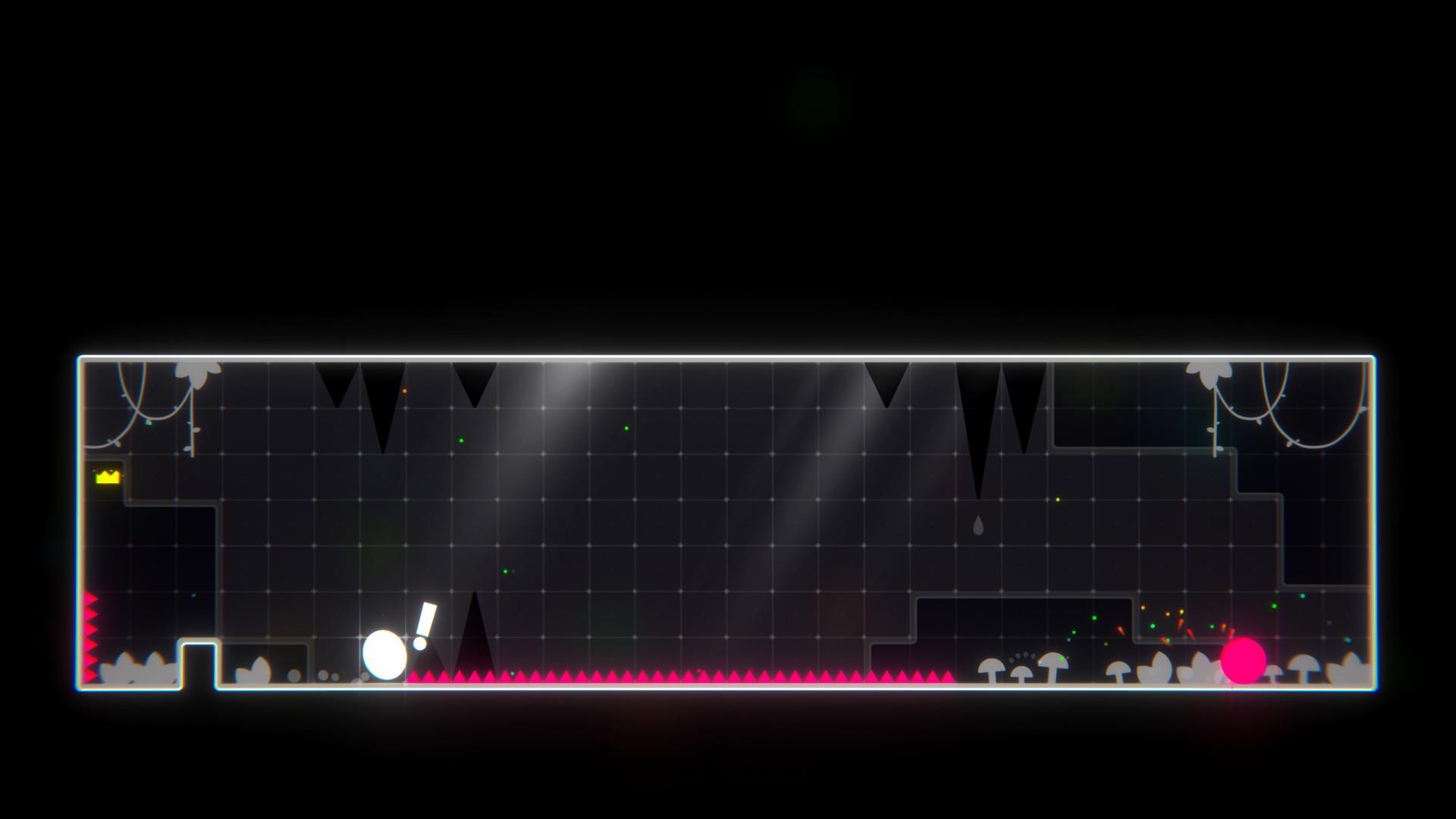 I call this a puzzle game, but the press release would refer to it as an "expertly crafted addicting platformer", and they are not wrong. They tell you up front that there are 300+ levels. They tell you that the game will become more difficult as you play it. They tell you that sometimes you will have to to make up your own ways to complete each level. And me? I ignored all of this information when I pushed start. And if you don't read this review, and read this paragraph twice, you've already lost. A lot. Like... a lot! No I'm serious. Go back and read this again before you buy this game.

The story is very simple. A king has fallen, and it's up to you to lead him back to get his kingdom in order. This story has very little to do with the game, and is only explained more through very cute, and quick cutscenes. Then the game starts. It shows you a rectangle box with two white orbs. The game shows you that you control both orbs at the same time. Your one and only goal, in every level, is to combine all the orbs into one. So if you use the control stick to push both orbs to the right, they will eventually run into each other, and you move on to the next level. The next level shows that if you jump, all the current orbs jump too. It teaches you a short hop, and a longer, higher jump. By level 4, you are introduced to the pink orb, and a level with pink spikes. If you push to the right, the white orb is destroyed when it hits the pink spikes. However, if you push left, the pink orb isn't harmed. So, you take it over to the left and combine it with the white, and move on. That's a taste. 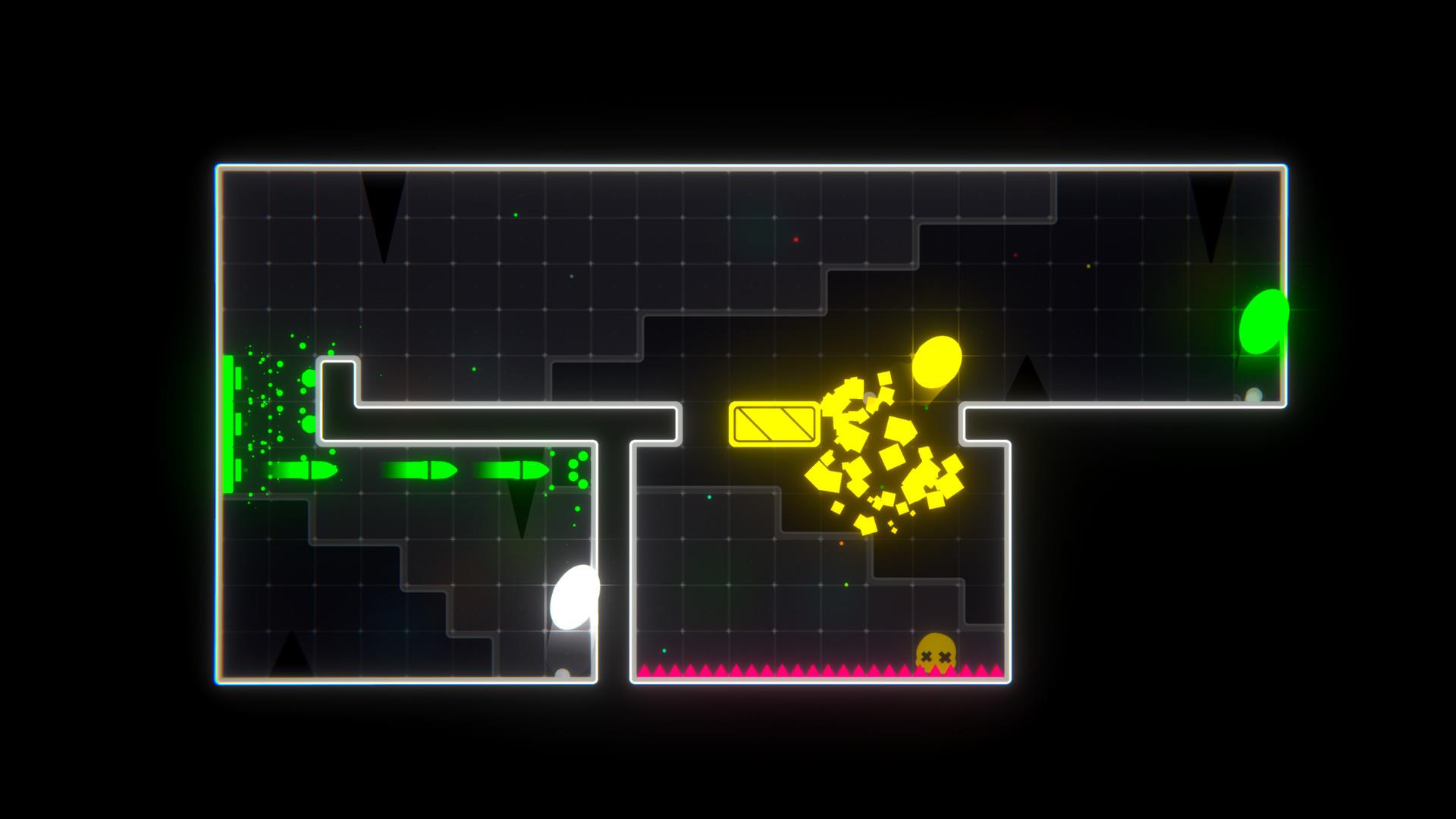 Kombinera then goes into a jumping exercise, and another level with a pink orb, but this time, there are things you must jump over. So you have to push to the right and jump so the white orb gets over the hump, but not all the way, or you'll hit the pink spikes. But the ledge is now preventing the white orb from going back left to the pink spikes on the wall, and is allowing the pink orb to come over and combine itself with the white, moving you right along. There's a level with multiple orbs, some pink, some white. When you combine the first 2, the white gains the property of the pink, so you can go over the pink spikes, and "rescue" another white orb, that you hopefully didn't push over the ledge onto the spikes.

The last few sentences in that paragraph is how I have to talk through the levels to beat them. The first 16 levels, I think you can get through with some regular common sense. Then you get to level 17. And level 17 makes you seem like you're crazy. It makes you feel inept. It makes you feel like you've learned absolutely nothing. How am I supposed to line these orbs up, so they stop hitting the pink spikes? Where's the pink orb, because when I combine with the white orb, the white orb now has white and pink properties, right? Then I could use it to go over the spikes. Alas, there's no pink orb. And I'm trying everything. And I mean EVERYTHING. I try 216 times. then on try 217, on level 17, I get it! And I rejoice! I knock out the last three levels, and that ends the chapter. The 1st chapter is over, and only 280+ levels to go. And level 17 took me 217 tries. Why am I still playing? Because I cannot stop. Because this game will not defeat me. Because I am a fool?

Before I go further, let's talk about the basics. Graphically, the game is simple, and not in a bad way. The colors pop off the screen, leaving you feeling as if you are playing in night mode the entire time, though in your options menu you can change those colors. If you want all the pink orbs and obstacles to be green, that option is available to you. For all you achievement hunters, there are "accomplishments", which also double as your stats screen. These stats include time played, levels completed, and yes, total deaths (1923 at the time of writing). You can also turn on the sound effects if you want the synthy and very thought provoking music to keep you in Zen as you talk to yourself. There are also different language settings, and a button configuration. 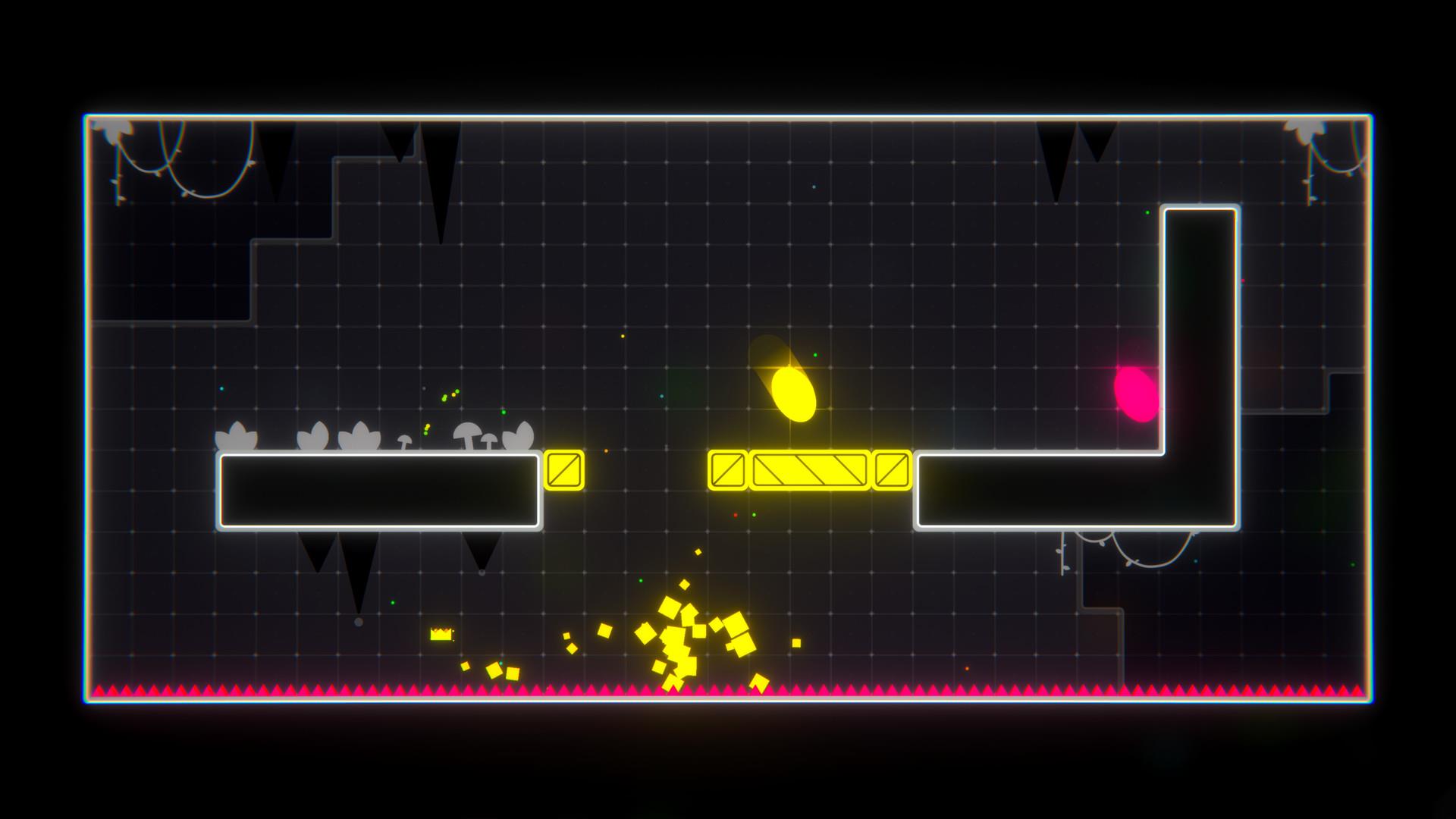 I say during the above stream that the game doesn't want you to win, and that's probably because I was challenged beyond my initial thoughts. Ever chapter starts with a title that has something to do with the levels, such as "long division", and "hopping mad". There is no absolutely correct way to finish each level. Sometimes, you may find yourself over-thinking how to combine the orbs, and lose anyway. To add to the replay value of the game, each level has a par time. Some of these levels had me perplexed as I spent 1 minute and 22 seconds, where as the par time is 22 seconds. There are also crowns scattered through out the game, which lead to secret levels. I have not conquered one secret level. And they will probably stay that way, for when I open them, I immediately reply "nope" and go back to the title screen. There are also times where I am literally telling myself, or whoever will listen, what the game wants me to do. "So they want me to go get this orb, come back, jump up and grab this one off the ceiling..." and then I die, and start over. I will spare you more of these theorems, for sometimes, I don't even know how I figured them out. The game doesn't want you to fail. It wants you to think. Hard. Have all the thoughts. And yeah, fail. Then think some more. And have feelings. 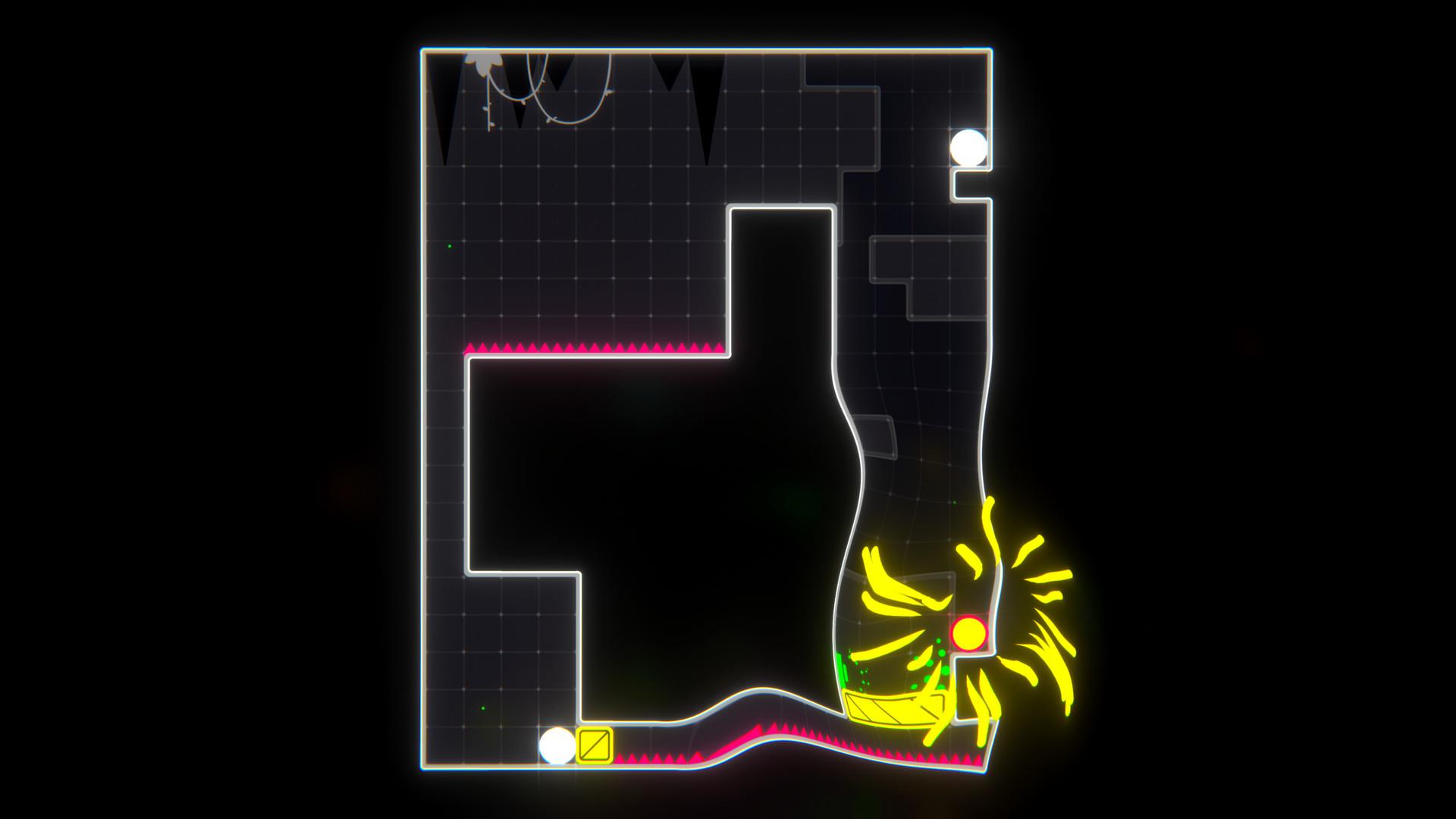 There's not much more I can say. I have slammed myself into this game with a third of the levels beat. I have encountered yellow orbs that break certain walls, blue orbs that can't get crushed by blue crushing walls, and black orbs that CANNOT JUMP! I am stuck on a level currently, and I find myself sitting the controller down often and letting my brain shed my incompetence. There have been times that I completely turn the game off, go get something to eat, relax, go back into it, and solve the level on the first try. The game teaches you patience, but not for long. It wants you to be the first to say you've conquered it. It wants you to stream it. It wants you to play it until you beat it, or your brain melts. Or both. Yeah, it's definitely both.

Kombinera is definitely one of the best, most frustrating, fulfilling, unapologetic games I have ever played. If you feel like you want to have some of your COD or even your Elden Ring friends lose their minds in a puzzle platformer game over and over, this is it. The hit boxes (ugh) are unforgiving. A mere touch of a hazard, and the level starts over. The levels also start over instantly, so if you're in a jam, and you keep trying to come flying out the gate, you'll be increasing that death count quicker than you can spell the name of this game. Kombinera is going to make you say "this is easy", and then say "I am not dumb, am I?" in a matter of minutes. If you want to get your brain meat a nice jolt, this is the game for you. If you want to laugh at your friends, this is the game for you. If you get frustrated very easily, hide all the breakable things in your living quarters.

Atari shows you how to mix a colorful, laid back vibe with an intense challenge. This gem takes everything you know about puzzles, and platformers, and throws it in the compactor, or should we say, the Kombiner. Win if you must, fail because you will. To quote an old video game show host, "Good Luck! You'll need it".