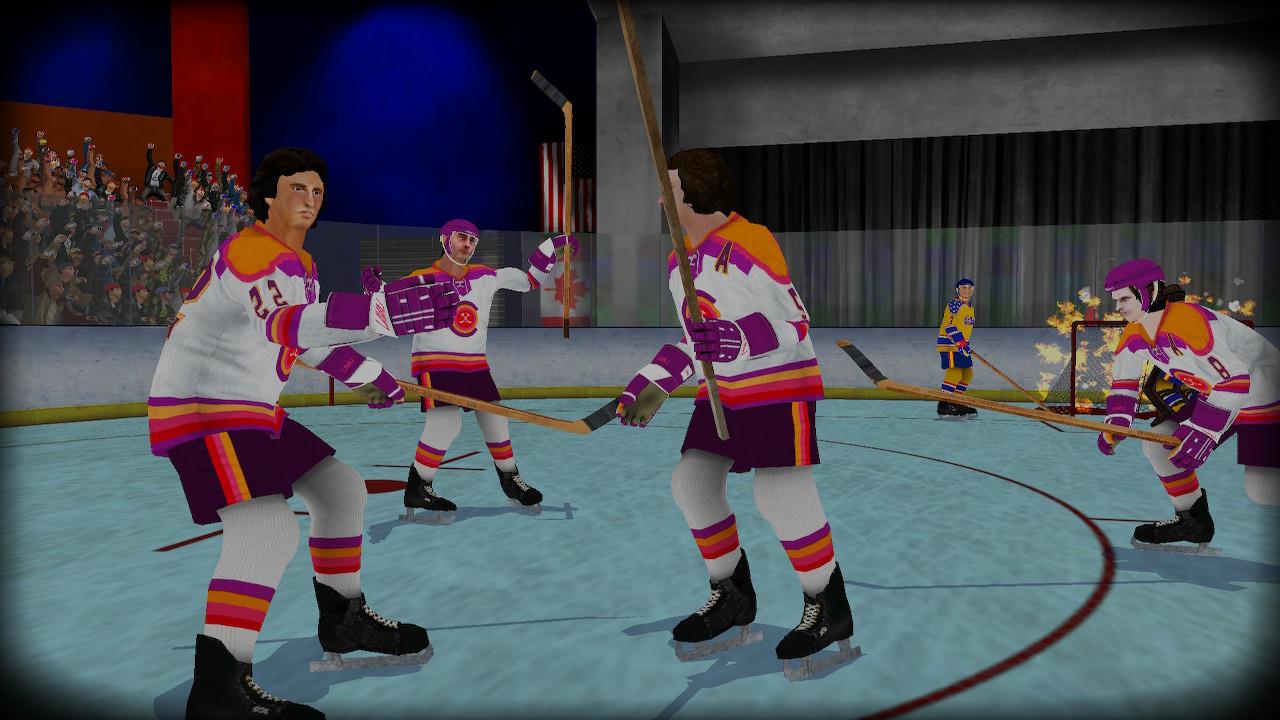 Written by Nathan Carter on 4/7/2022 for SWI
More On: Bush Hockey League

One of my favorite games from my childhood was NHLPA Hockey '93 on the Super Nintendo. My dad and I would play almost every day, and we got so good that we had some heated back and forth games that I will never forget. We also had to implement a no "wrap around the goal" exploit rule cause - we along with everyone else that played this game - knew that trick. It's probably why I prefer more arcade style sports games rather than straight simulations. That's the main reason I wanted to try Bush League Hockey, a game which looks like it's playing homage to both classic 70's hockey and classic hockey videogames with its simple controls and gameplay. Bush League Hockey looks the part and while I wouldn't say it's a bad game, it does seem to be lacking in several areas.

Bush League Hockey pays tribute to the Hockey of the 70's where every game was basically an all out no holds barred brawl. Players didn't wear helmets, tensions were high, and fights were plentiful. It was more like Gladiators entering an arena rather than a Hockey game back then. All of the text in the game, the uniforms, and even the music does a great job of capturing this time period. Hearing Stompin' Tom Connor's "The Hockey Song" was awesome. In game, the character models don't look amazing but still good enough for a smaller game like this. They also have somewhat of a cell shaded look to them. The arenas look great as well and the game has a filter over it to make it look like you are watching the game on an old CRT television. 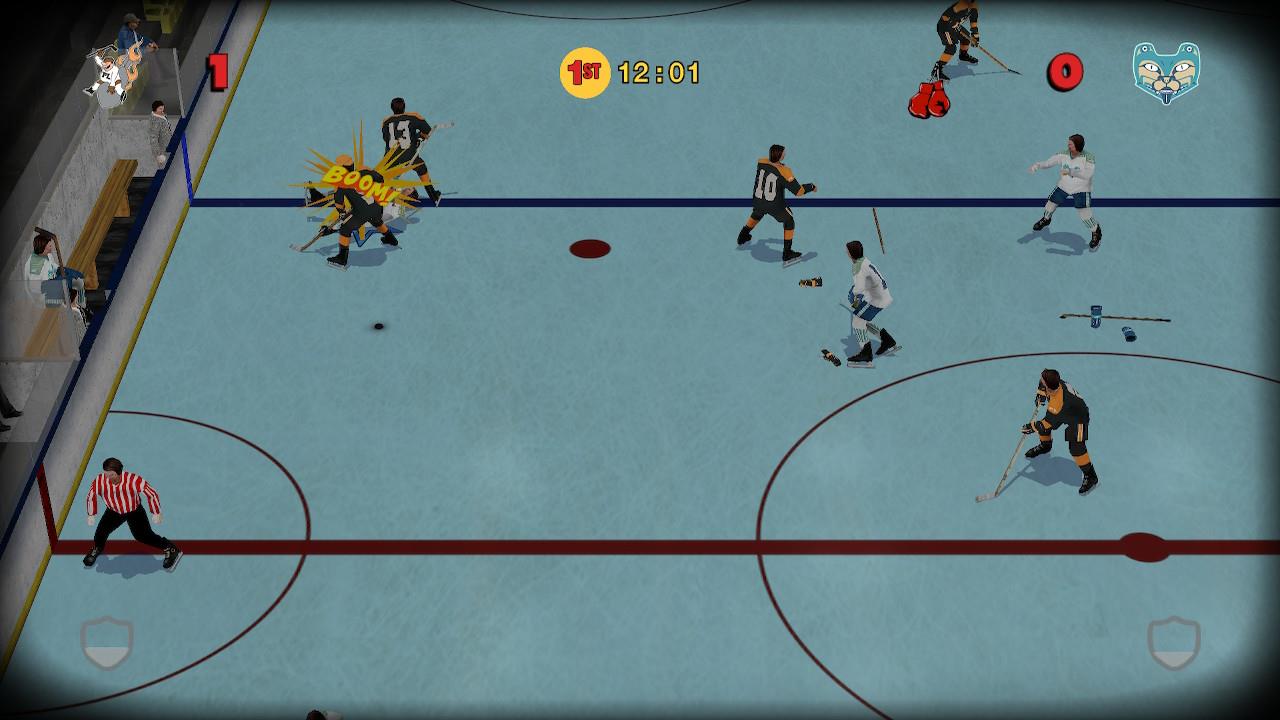 Bush Hockey League plays from that traditional top down perspective and does look like classic hockey games, with the player you are controlling being marked with a star under them. The game offers three different control schemes, but I went with the classic one where there are only two buttons used for shooting and passing. Passing is done with right trigger (or ZR as I played this on the Switch) and shooting is done by flicking the right thumbstick. While I have been singing the games praises for it's presentation, this is where it starts to falter a bit. While Bush Hockey League is a pick up and play arcade game, which you are playing exhibition or story mode, the game does feel somewhat slow. It just misses the mark in terms of speed to get that true arcade experience.

Expect these games to be really high scoring as well, as the goalies - even in exhibition mode - can be kind of brain dead at times. It seems there is this really weird loop where if a goalie does grab the puck, there is a chance that an opposing player will literally circle around the goalie so it's hard to pass the puck to a teammate. The opposing player will grab it and the goalie will just grab it back. Each team also has abilities to play based on their attributes, like being able to easily knock players down and being better at fighting. And of course, Bush Hockey League has fights. When the action pops off, the game will essentially turn into a fighting game with health bars for each player. The fighting isn't really that fun. It's really stiff and it's a shame because fighting seems to be a big part of the game; fights can injure players and take them out of the game. 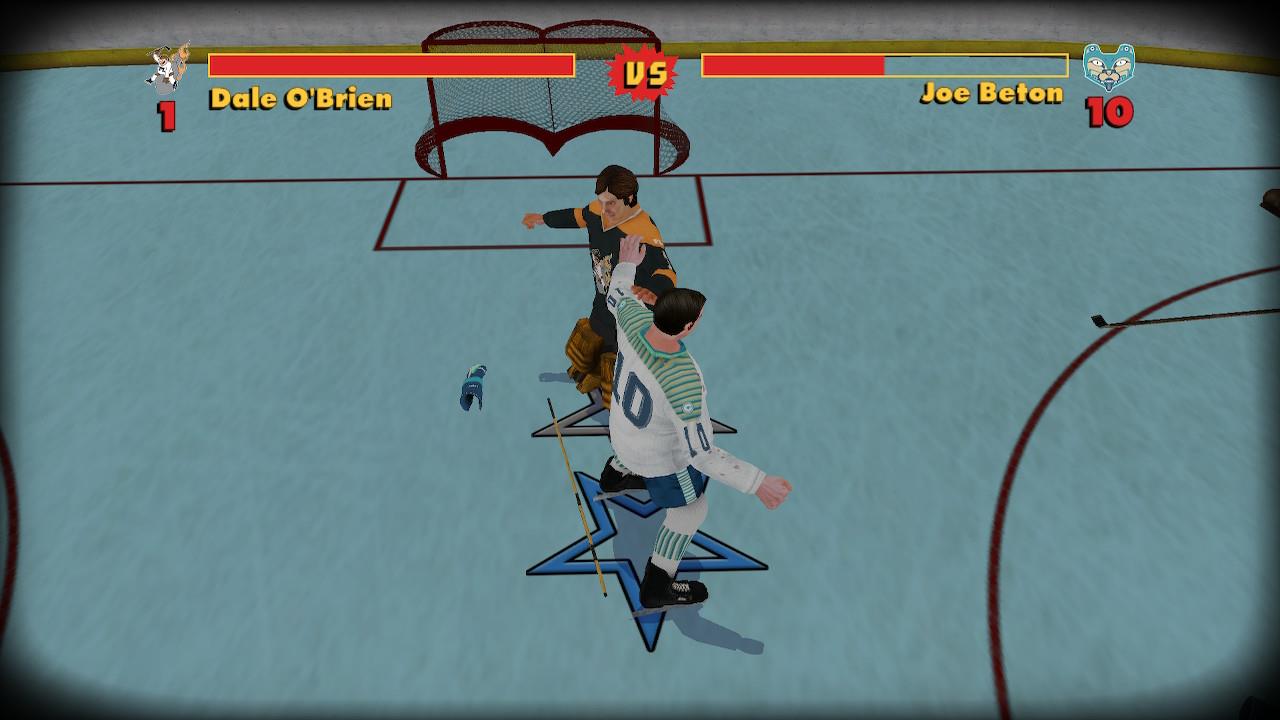 There is multiplayer available for up to four players but it's local only and there is no online play. You can also turn off onsides and icing rules to make the game even more of an arcade experience. Aside from exhibition mode, the only other mode is the story mode. In story mode it's your job to take a fledgling team that's about to be disbanded and take them to the championship.

Though newspaper clippings and loading screens you can find out that your team, the Schuylkill Hinto Brews are, well, pretty much showing up to games in no condition to perform. From drinking too much, bar fights, and punching out mall Santas, if a big change isn't made the team is done for. While I like the idea of bringing this team to greatness, the execution is severely lacking. For one, your team starts off with no abilities and your goalie is essentially worthless. If your opponent gets the puck they will score a goal. In order to gain abilities and make your team stronger, you need to complete objectives and while some of these can be easy - like scoring a number of goals or checking opponents - some of them can be a real exercise in patience. The objectives I really disliked were ones where you have to score points from certain areas of the rink because it seems like if you are not in the exact precise spot it won't count. With all of the opposing team ganging up on you, trying to score goals like this gets really tedious. Your team starts off terrible but will grow as you complete objectives. The more objectives you complete, the more points you will earn, which will give you access to the abilities the other teams have like more advanced shots and your team being on fire for consecutive goals. The main issue with this mode is that it sadly is just really tedious to play. 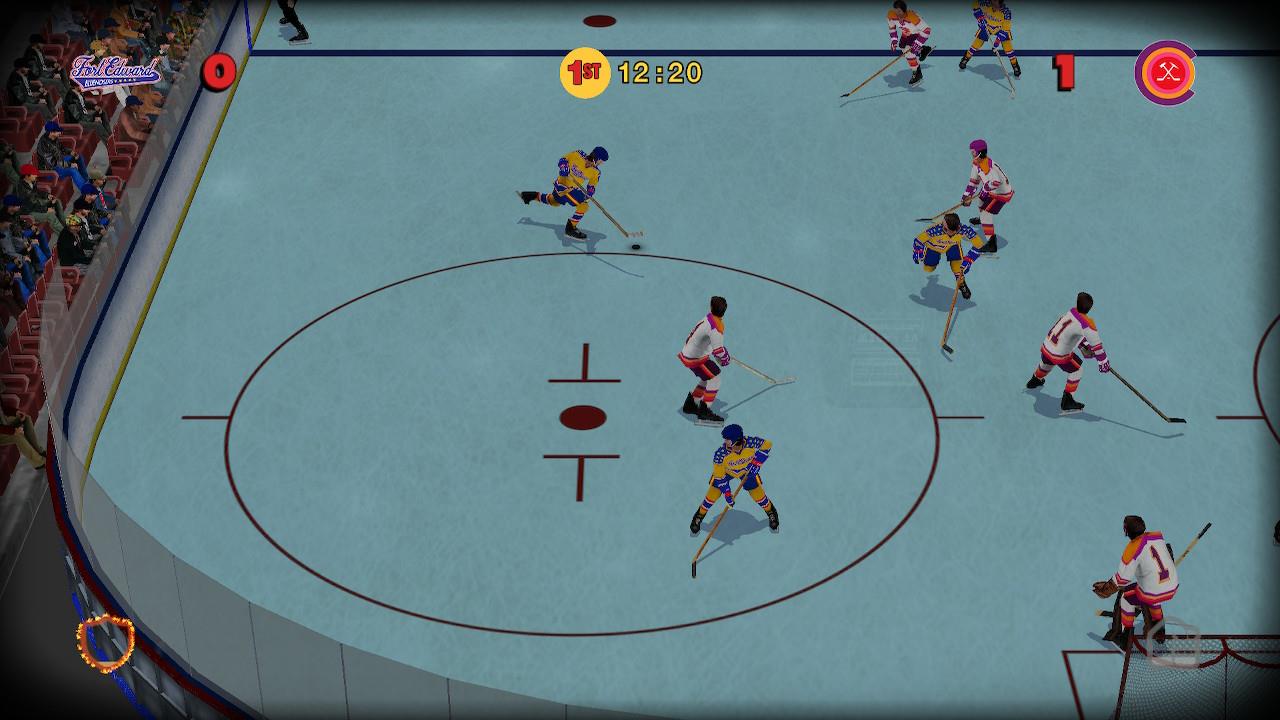 Speaking on a technical level, I didn't really experience that many glitches but the game did crash on me a few times and oh my good lord the loading times are absolutely atrocious. I was waiting for the game to load for so long that honestly thought that the game had crashed or something. I timed it. It takes around 1 minute and 30 seconds just to load into a game and this is for both exhibition and story mode. That's completely unacceptable, and I have no idea why it takes so long because it's not like this game is really all that graphically intensive or anything like that. I haven't played any of the other versions of the game so I'm not sure if this is a Nintendo Switch exclusive issue, but man, having to wait that long just to play one game is insane.

All in all Bush League Hockey looks great and captures the look and feel of classic 70's hockey and while I wouldn't say the game is bad gameplay wise, to me it just doesn't play well enough to be something that I would want to play all the time. I could see me playing exhibition mode in small spurts as games do end quickly but sadly this isn't the hockey game I would go to to get my arcade action fix.

Bush League Hockey got just about everything right except for the actual Hockey part, which is a shame because this is a charming arcade-style game but it's not something that I can see a lot of people wanting to play over long periods of time.