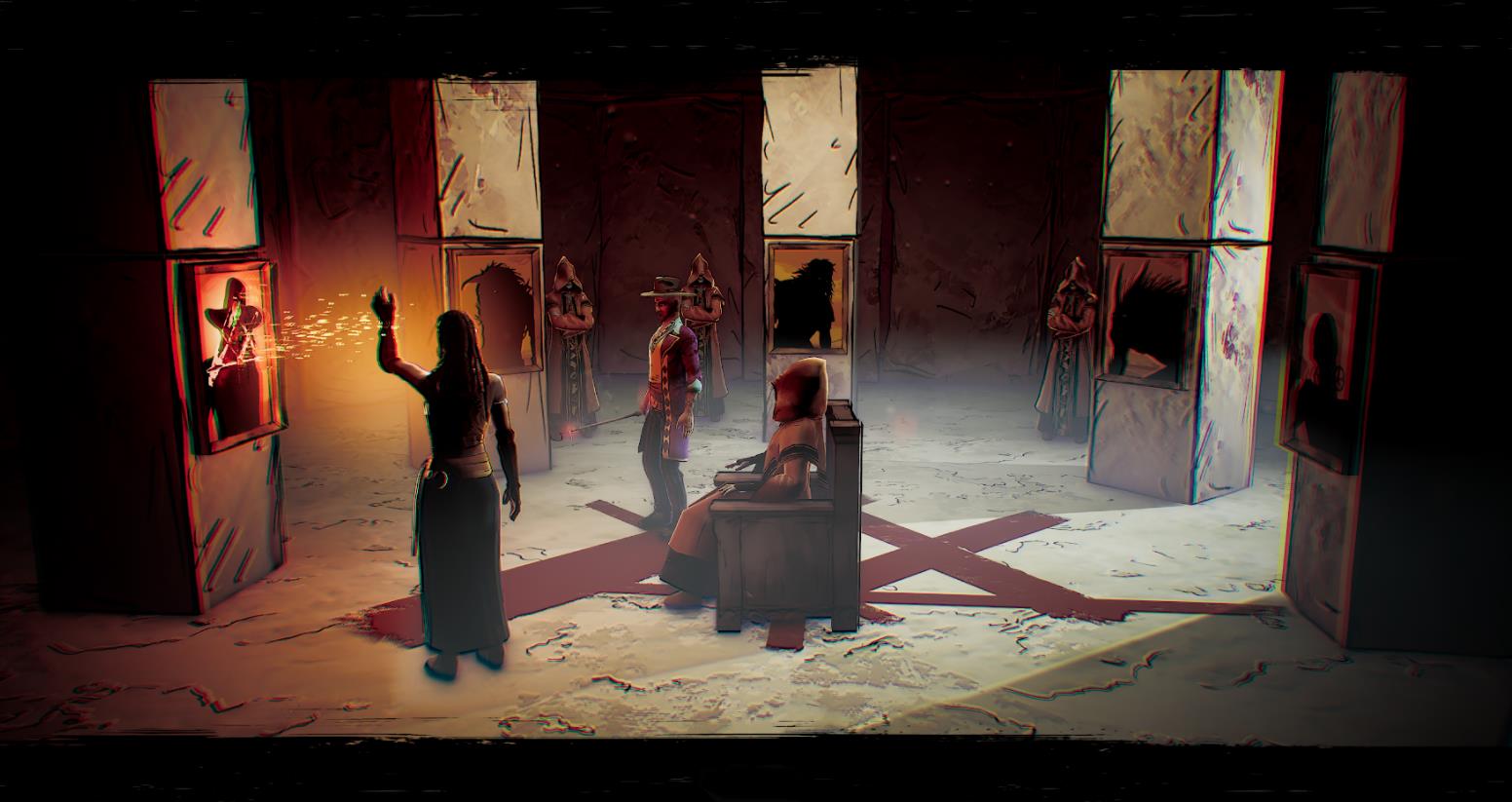 It took me a while to get onboard with top-down games. Wasteland 2 was the gateway drug that finally pushed me through the barrier holding me at bay; the siren song of a post-apocalyptic Fallout-like adventure was too much for me to resist, and I soon realized the advantages of a birds-eye view. I began to relish being able to see what was lurking behind corners, and the ability to swing the camera around to get a full view of the area. Over time, I came to appreciate the way these games shuffled me from location to location, taking away the need to tromp around barren settings to get right to the good stuff.

The Wasteland series is the quickest analog to come to mind for Weird West, the new action-packed haunted frontier sim from developer WolfEye Studios, but of course there are some key differences. Beyond the obvious twisted-western setting, the real-time combat system and episodic nature of Weird West set it apart from its more tactical contemporaries. But there are some key genetic similarities between the two properties, and fans of one should feel pretty comfortable delving into the other. 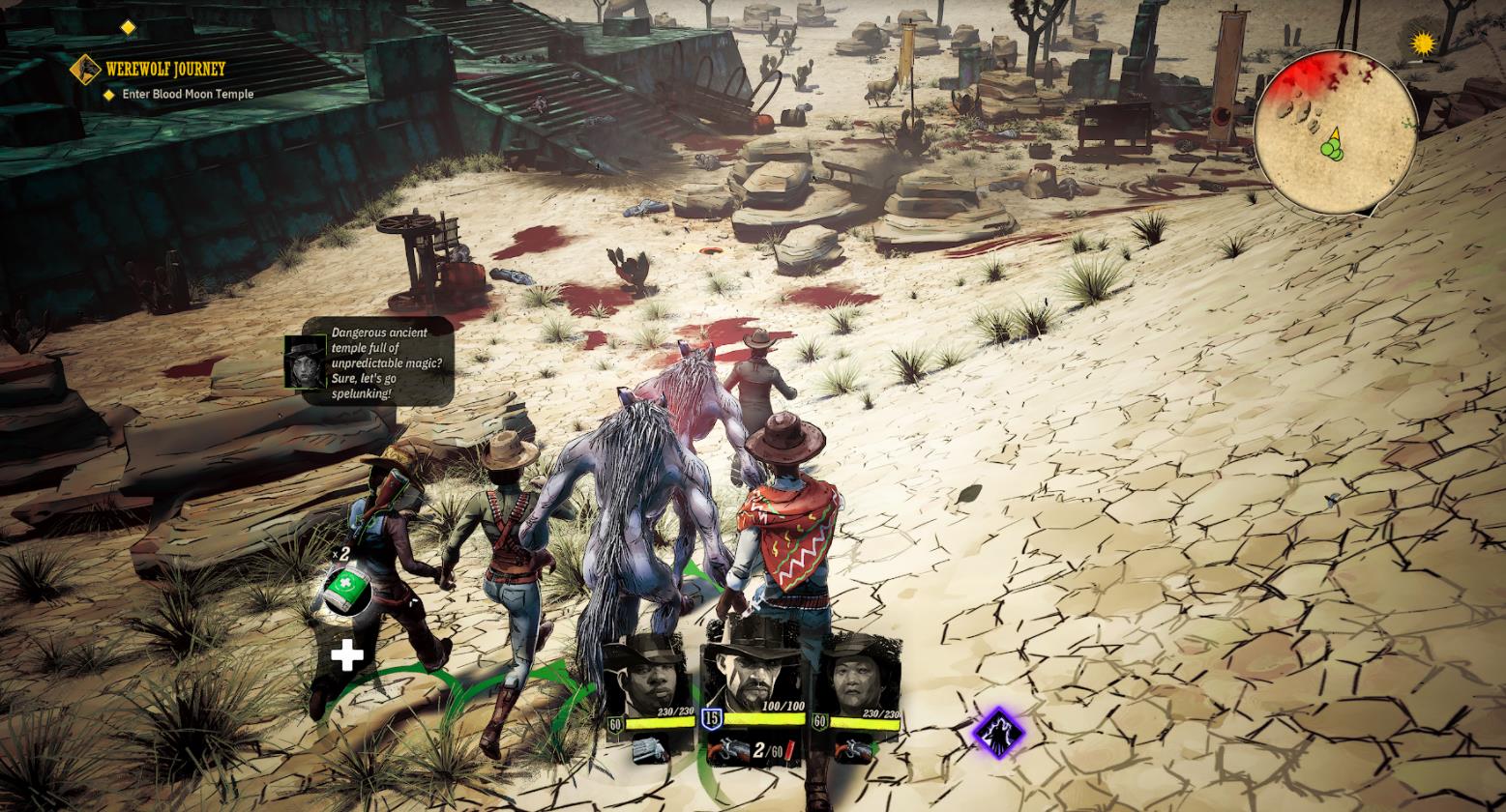 I’m not going to bury the lede here – I really enjoyed Weird West, and I’m excited for other people to play it. While it is not a perfect game, it is perfectly enjoyable; I never once felt bored or unengaged while playing it. There is a great story behind the game's fighting and exploration, and some shockingly good music moments scattered throughout. Even during the long periods I spent ignoring the story and grinding out bounties for cash, I was perfectly happy to do so, as simply engaging with the game’s fun systems was rewarding in itself.

Of particular interest is the combat system, which allows players to quickly swap between the five primary weapon types in the heat of battle. While dedicated players can go deep on grinding out loot for the game’s best weapons (and they are great when you get them), it is equally important to know which weapon to use in a situation. Fighting a werewolf up close? Grab your shotgun. Need to approach a camp quietly? Pull out your bow. Fighting groups of bad guys is much quicker and more accessible than doing so in a strategy game, adding a fun action element to Weird West that is missing from other similar games. 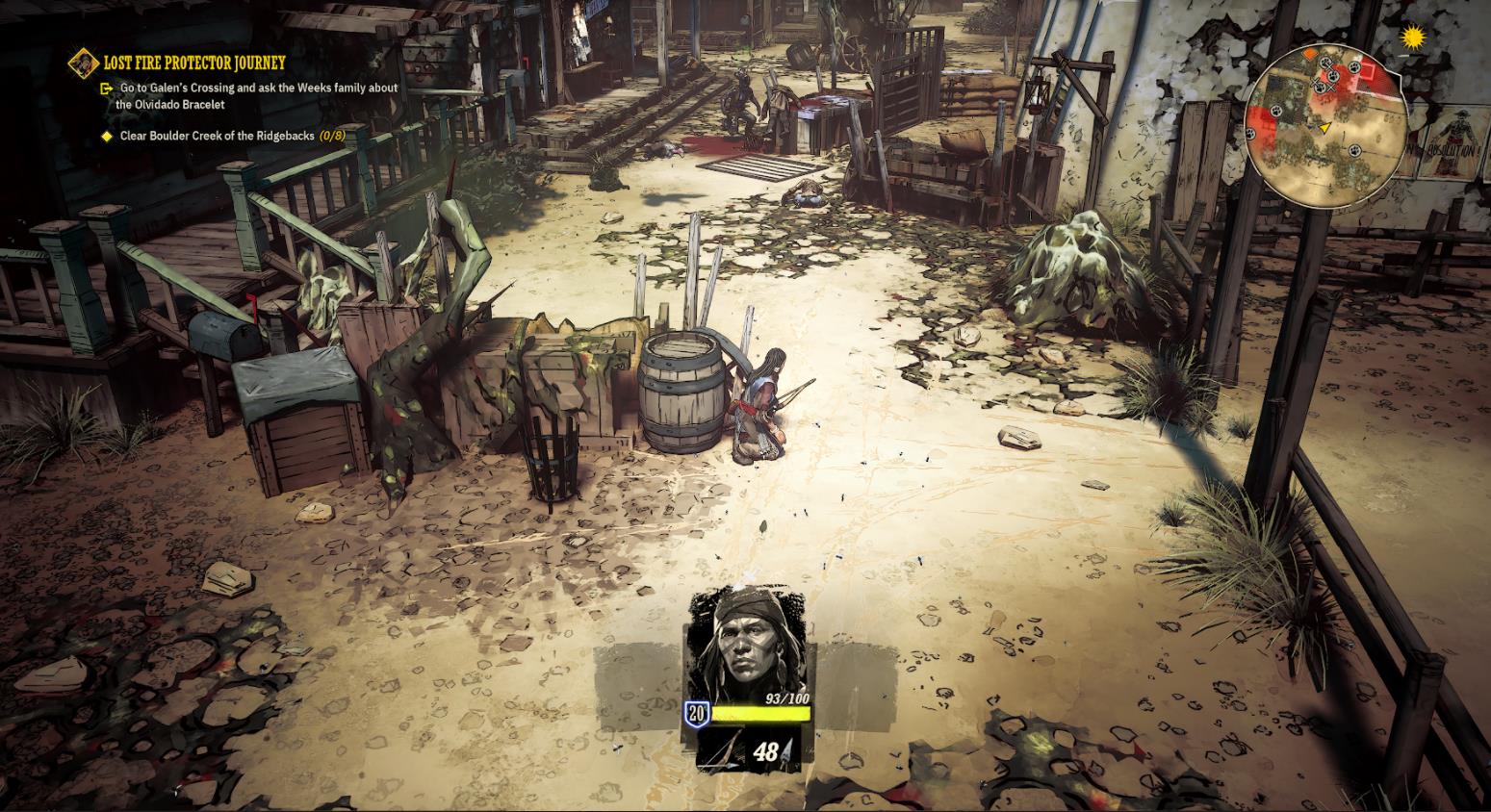 The environment is very interactive, with explosive and poisonous barrels littering the landscape. I’ve seen it a lot in strategy games, but it’s a lot of fun to spill oil on the ground and then light a group of baddies on fire in real time. There are also some pretty decent stealth mechanics for those that want to creep around quietly, taking out guards around the edges and lowering enemy numbers before plunging into the fray.

As much as I want to label Weird West an RPG, it isn’t really. I was about halfway through the game when I realized that there was no experience granted for kills or quests and very little in the way of progression beyond gathering loot and goodies. A perk system lets you customize your play style a bit, and each of the characters has a few abilities that can be unlocked, but for the most part you could take your character from the beginning of the game and march right to the final showdowns and probably be okay if you could roll and shoot fast enough. This is a game with a lot of great mechanics, but they are all used in service of the very cool story. 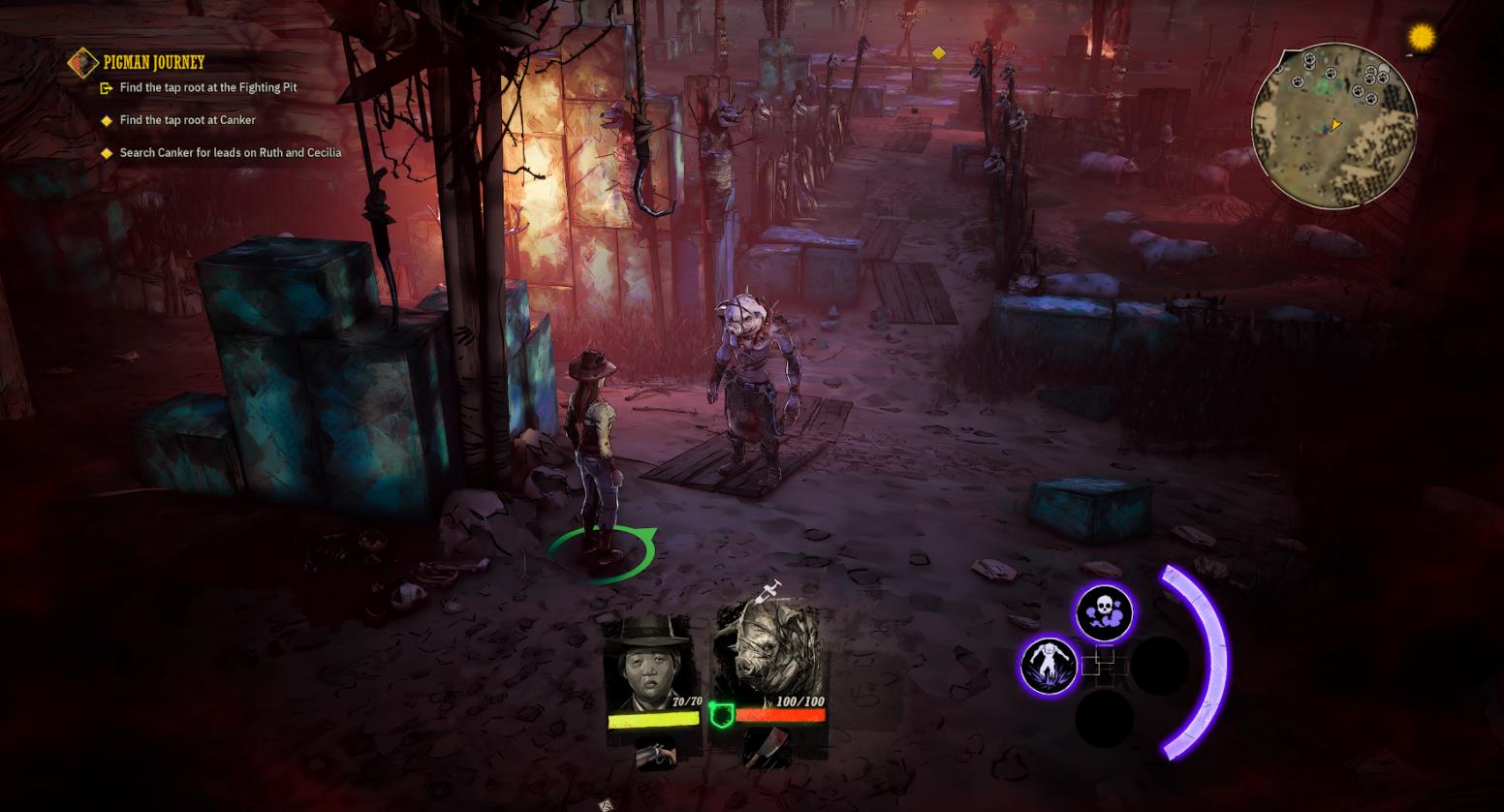 And how weird is Weird West? Pretty darn weird. The game is constantly darkly humorous, and frequently surprising. In the first five minutes of the game some strangers roll up onto the homestead of our first hero, the female bounty hunter. They immediately shoot and kill her young son and take her husband away to a camp to eventually be food for a gang of cannibalistic sirens.

Arriving at town to question a member of the gang that took her husband (I immediately chose to break all of his fingers), the bounty hunter finds that it was just raided, with half of the populace being taken to feed the same supply chain. The goal becomes quickly clear; destroy the gang, destroy the supply chain, destroy the sirens, and find your husband. But nothing is simple or clear cut; there are werewolves, pig-men, and a strange cult lurking around the corners of the bounty hunter’s story – and her tale is just 1/5 of the overall game. 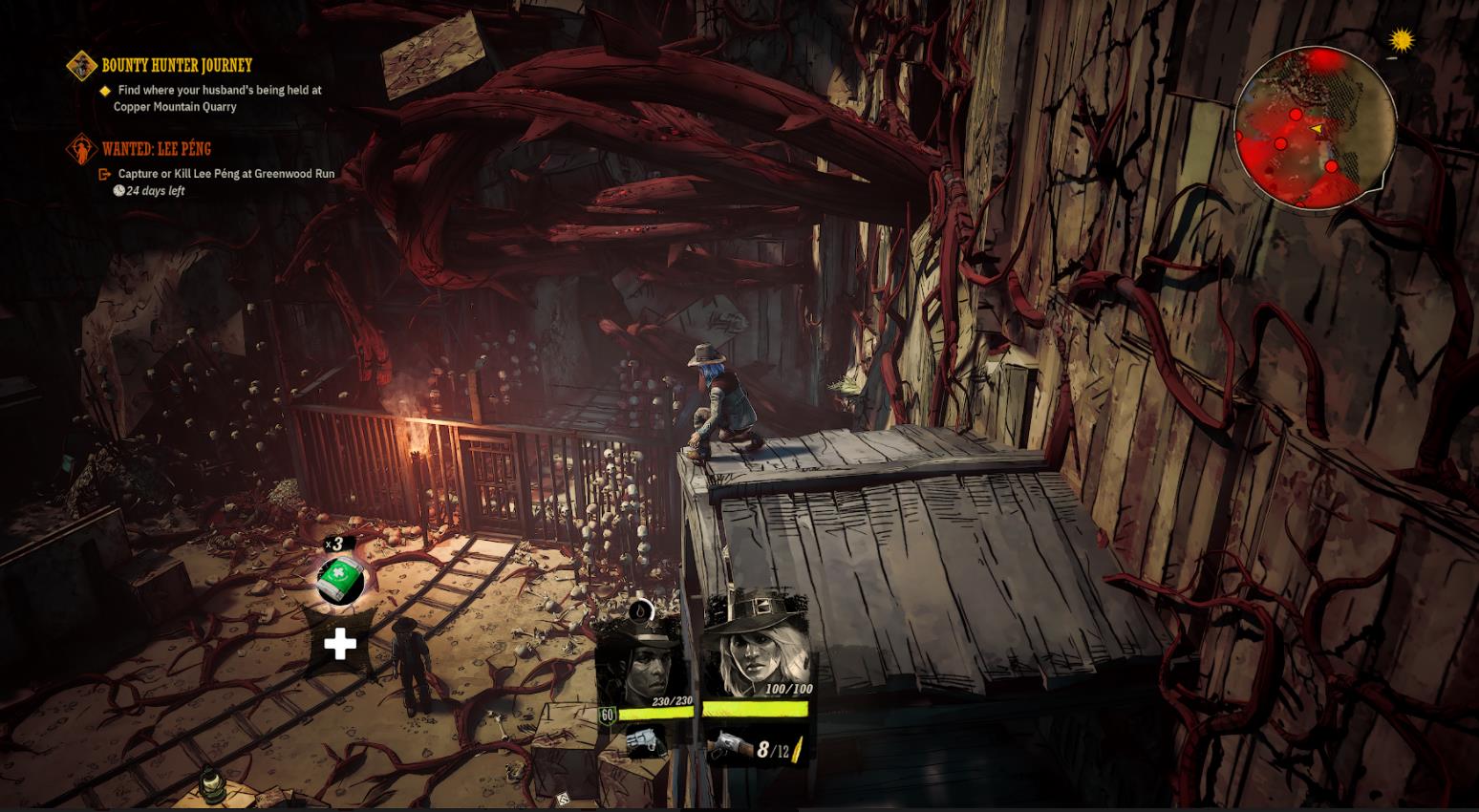 Weird West has a unique setup that I don’t recall seeing in a game before. As opposed to following a single protagonist through its twenty-five hour-or-so campaign (that’s what the developers say – I took about forty), Weird West plops the player into the shoes of several characters, each with their own arc. Each of these characters has its own setup and storyline, all of which contribute to the overall world building and storyline. Don’t get used to anything – towns that welcomed you as one character might attack your next incarnation on sight.

The conceit that allows Weird West to get away with this game of narrative duck-duck-goose has the player standing in for a spirit that bounces around the West, possessing various people (and non-people, and sort-of people) when a brand appears on their flesh. The impact can be jarring; the first time I switched bodies, I wasn’t expecting it, so I was a little perturbed to wake up in a new situation with all of my hard-earned cash and high-end weaponry left behind in the care of my first character. 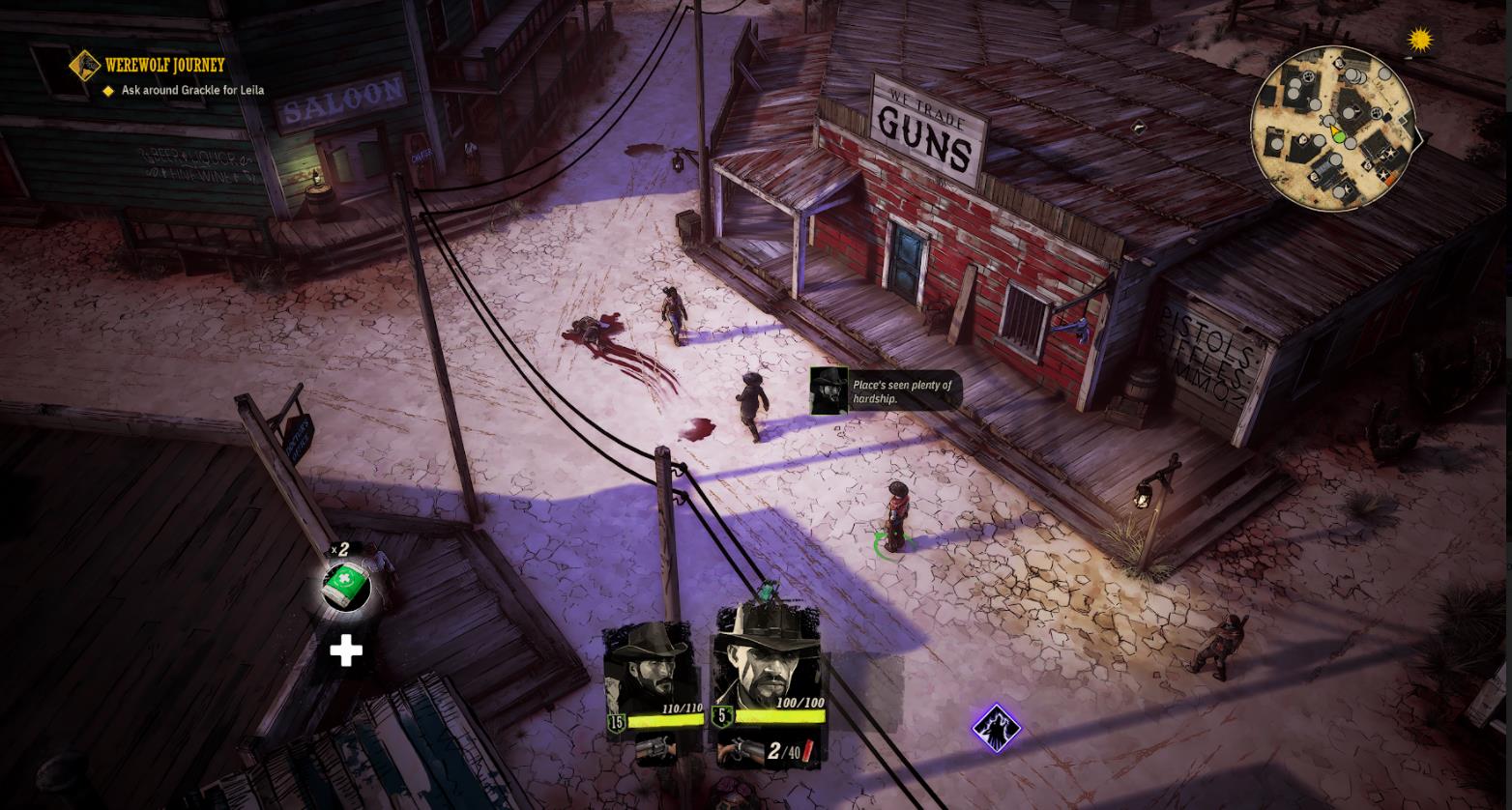 But not to worry. Weird West provides the player with plenty of opportunities; loot is lying around everywhere, and it doesn’t take long to start piling up cash and cool stuff. And by the time I finished my second story arc, I realized that I could see the end coming, so I stashed all my super-good stuff in my horse’s saddlebags to carry over to my next incarnation. When you wake up in a new body, make buying a horse your top priority, and – poof – your stuff is returned to you.

This workaround (the saddlebag thing) is one of several concessions Weird West makes to give the game a cohesive feel. However, the multiple-narrative thing isn’t without its faults. While I really enjoyed the fact that Weird West clicked the “reset” button every four or five hours, the fact that my actions in one scenario seemed to have little impact on the rest of the game felt like a bit of a missed opportunity.

Sure, if you run through a town and kill everyone as the Bounty Hunter, that town will still be abandoned (or inhabited by something worse than humans) when you play as the Pig Man. But there is an element of narrative choice that seems to be missing in Weird West – and while actions impact the rest of the game, choices didn’t really seem to matter all that much until the last few minutes of the game. There seemed to be very little in the way of branching narrative of the sort one would find in a Bethesda game, for example. Its not a huge deal but it is something I would love to see implemented a bit more when this game’s inevitable sequel arrives.

In many ways, Weird West feels like the first game in a franchise, doing a lot of the heavy lifting needed for world building and tone setting. I am hoping that this is the first chapter in a great ongoing exploration of a fantastic new universe. I could easily envision a Weird West II (Weirder West?) with far more content embedded for players to find through exploration. Some random events do take place during the game, and some destinations are only used for exploration, but I get excited to think of what WolfEye Studios could do with this fantastic world now that the first game is out of the way. This Star Wars feels very much like it has an Empire Strikes Back lurking in the shadows. 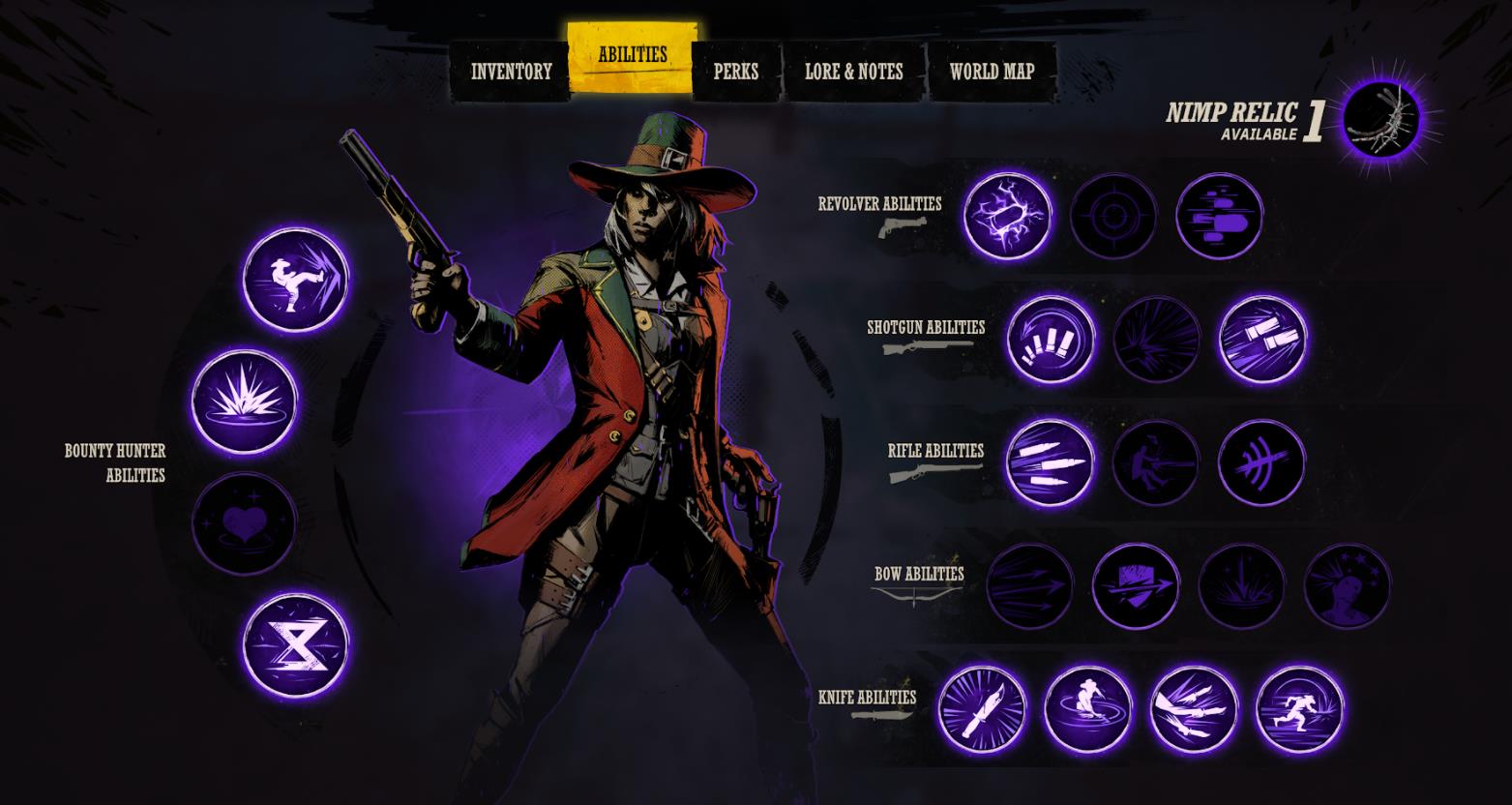 But in no way should anyone sleep on Weird West just because it is still building towards its full potential. This is a game that pulled me in like few others; I had to take a break in the middle for a five-day work trip, and the first thing I did upon returning was to sit down and finish it. And even though I’m done, I’m still tempted to dip back into my last save and dork around for a while. Simply existing in Weird West’s world is a lot of fun.

Weird West is a great game, and I imagine that many players will discover the many pleasures offered by the music, visuals, and story by trying Weird West via Game Pass. For those not in Xbox’s ecosystem, I would still recommend you seek out this game and play it. I played on PlayStation, and frankly, regardless of what system you play on there just aren’t that many games like Weird West on the market. Sure, there are a lot of games that let you explore and shoot, but few with a story and world as…well…weird as this one.

Weird West is a fun not-quite-RPG that feels like the beginning of a great new franchise. Perfectly enjoyable to play, this first iteration lays a lot of groundwork towards what will likely become an ongoing series. Darkly funny and surprising, each character's story arc is unique and rewarding. While a system of branching choices impacting the game's story feels like a natural evolution from what is here, what is presented is very enjoyable. Weird West creates a universe I don't want to leave. When it was over, I just wanted more - which is the biggest hurdle a new franchise can overcome.