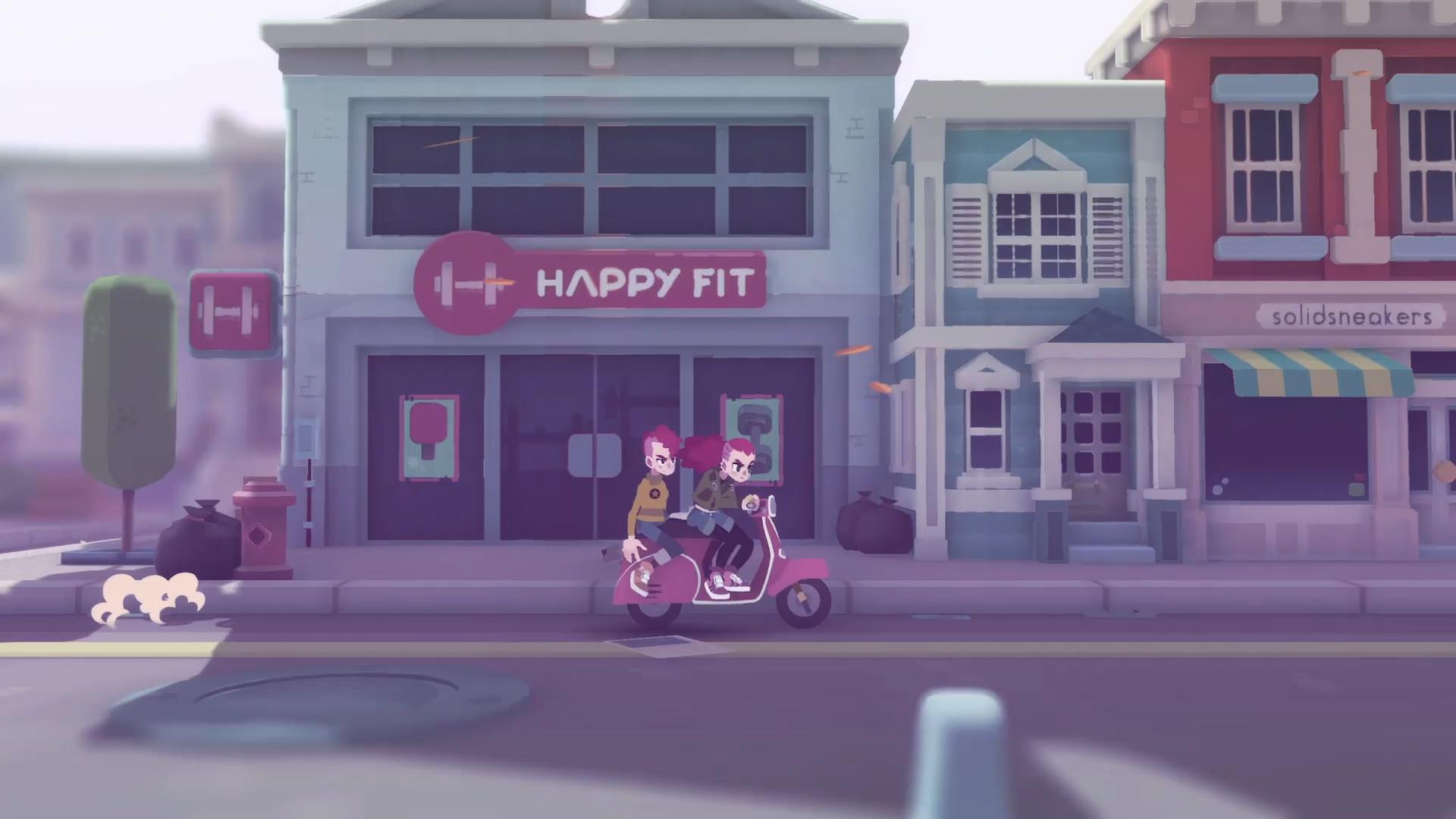 I have never been a beat-em-up fan. As a kid, I actively avoided the genre in the arcades. Though my friends would gravitate straight towards them, I didn't like the Turtles, the X-Men, or the Simpsons arcade machines. The entire genre just felt like an excuse for arcade machines to eat my quarters; I didn't understand how anyone could get good enough at these games to make them worth playing. My aversion continued into adulthood. Games like Scott Pilgrim just felt like so much button mashing; I would lose track of my character instantly amongst the chaos. I didn't like them, so I didn't try overly hard, so I sucked and died a lot.

When Young Souls dropped on Stadia last year, I saw that a lot of my Twitter friends were enjoying the game. The buzz around the game reached a low rumble in the Stadia community, and it seemed like everyone I knew on Google's platform was screaming about the greatness of Young Souls. There was something more to it, they said, something that gave the game actual stakes and heart. But as much as I trusted these folks and their judgement, I still didn't engage. I didn't like beat-em-up games because they are shallow and dumb, so I didn't try Young Souls. 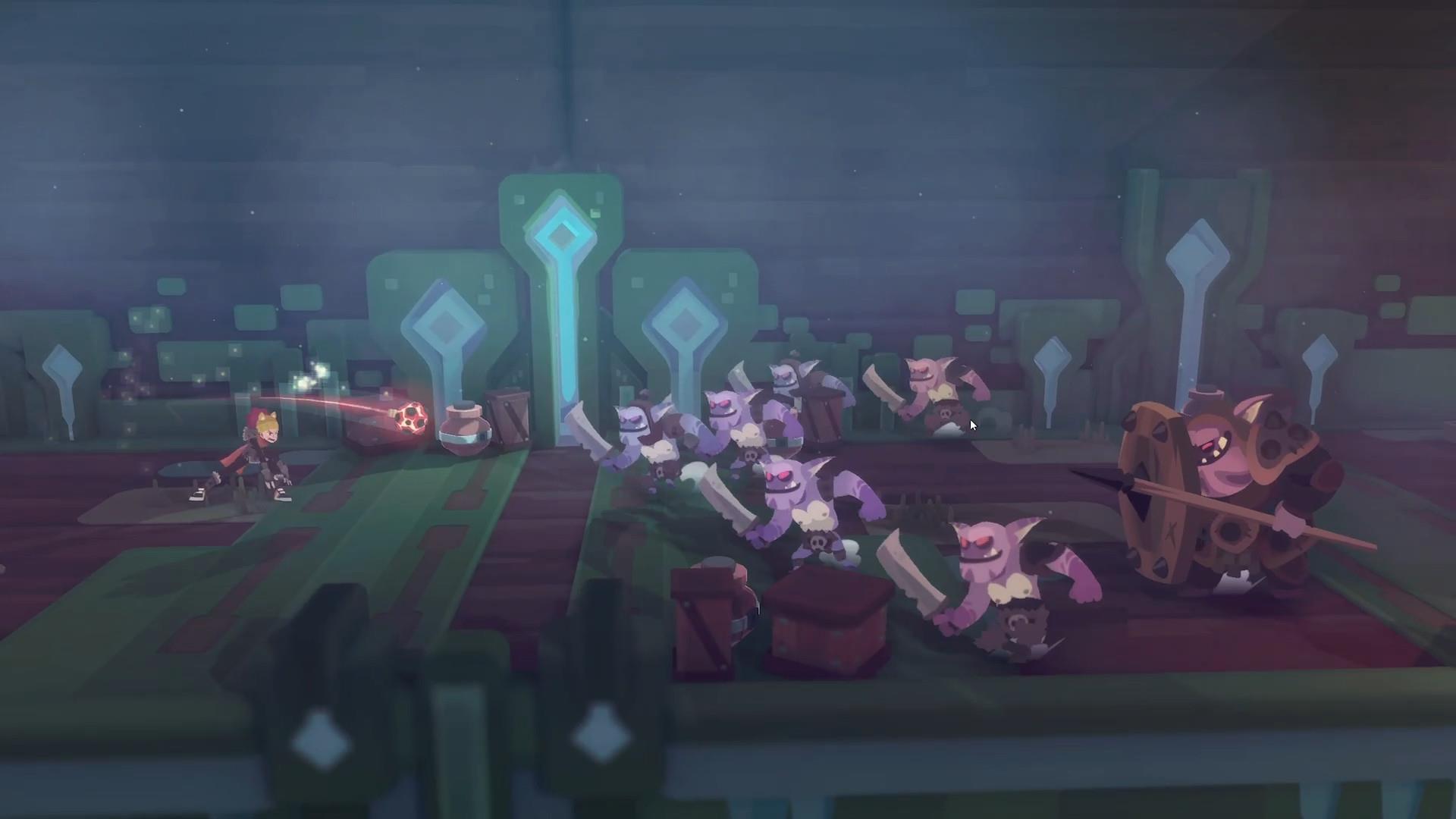 But leading up to Young Souls' recent release on consoles and PC, the game kept creeping into the periphery of my vision. Oh, I thought, that art style does look pretty cool. Hmm...those characters are funny and appealing. Hey, that looks more like a dungeon crawler than I was expecting. The next thing I knew, I was downloading Young Souls and jumping in. After all, in my eyes, one of the privileges of writing at a gaming site is getting to try new things, and that often results in me loving things I had no intention of loving. And such was the case for Young Souls. I won't say that Young Souls opened up a doorway for me, and now the scales have been peeled from my eyes and I love beat-em-up games. But I will say that Young Souls has so much great stuff going for it that I was able to look past its place in a genre I dislike, disregarding my prejudice and just engaging with it as a video game. And what a cool, cool video game it is.

Young Souls tells a story, which already puts it heads and tales above the typical "Chuck and Bub need to beat up all these guys and move to the next screen" story one normally sees in games like this. There is a structure built up around that core gameplay that gives the player more things to do than just punch dudes in the face, which makes punching dudes in the face much more fun. Like any form of entertainment, if you give the audience some characters to care about and devote time to building them up, then the audience will care so much more about what happens to them. 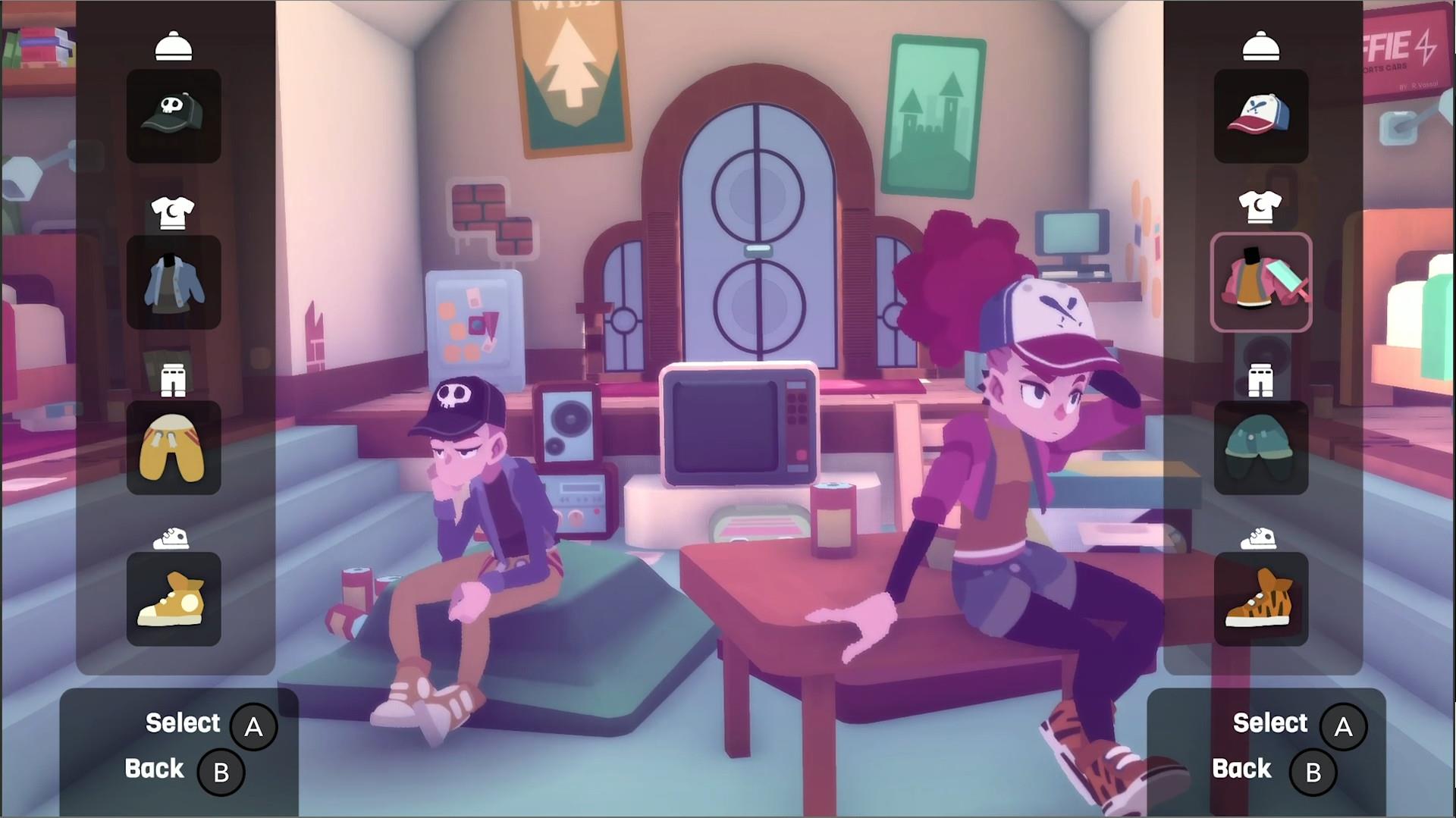 Young Souls is the story of Jenn and Tristan, two orphaned twins that have recently been adopted by an absent-minded professor. The twins are glorious creations, all teenaged attitude with a core of vulnerability. They are animated in a way that highlights just how young they really are, undercutting their street-tough dialogue with their cute little cartoon faces. At the beginning of the game, Jenn and Tristan discover that the professor has been working with the local town leadership to establish a relationship with the goblin population that lives beneath the town - something the twins were utterly unaware of. The professor has been kidnapped by new goblin leadership, and the twins - reeling from the discovery that goblins and magic are real - single-mindedly set out to recover the professor in the most teenage way possible (by kicking every ass that gets in their way).

This sets the twins on a journey of self-discovery and goblin slaughter. Making their way into the goblin realm via a gate in the professor's secret lair, Jenn and Tristan delve ever deeper through a series of dungeons, fighting grunts, collecting loots, and taking down bosses along the way. The dungeons at first seem to be straightforward, but very quickly the game reveals that there are a multitude of routes that player can take, which leads to some pretty cool Metroidvania-style backtracking to open alternate routes. 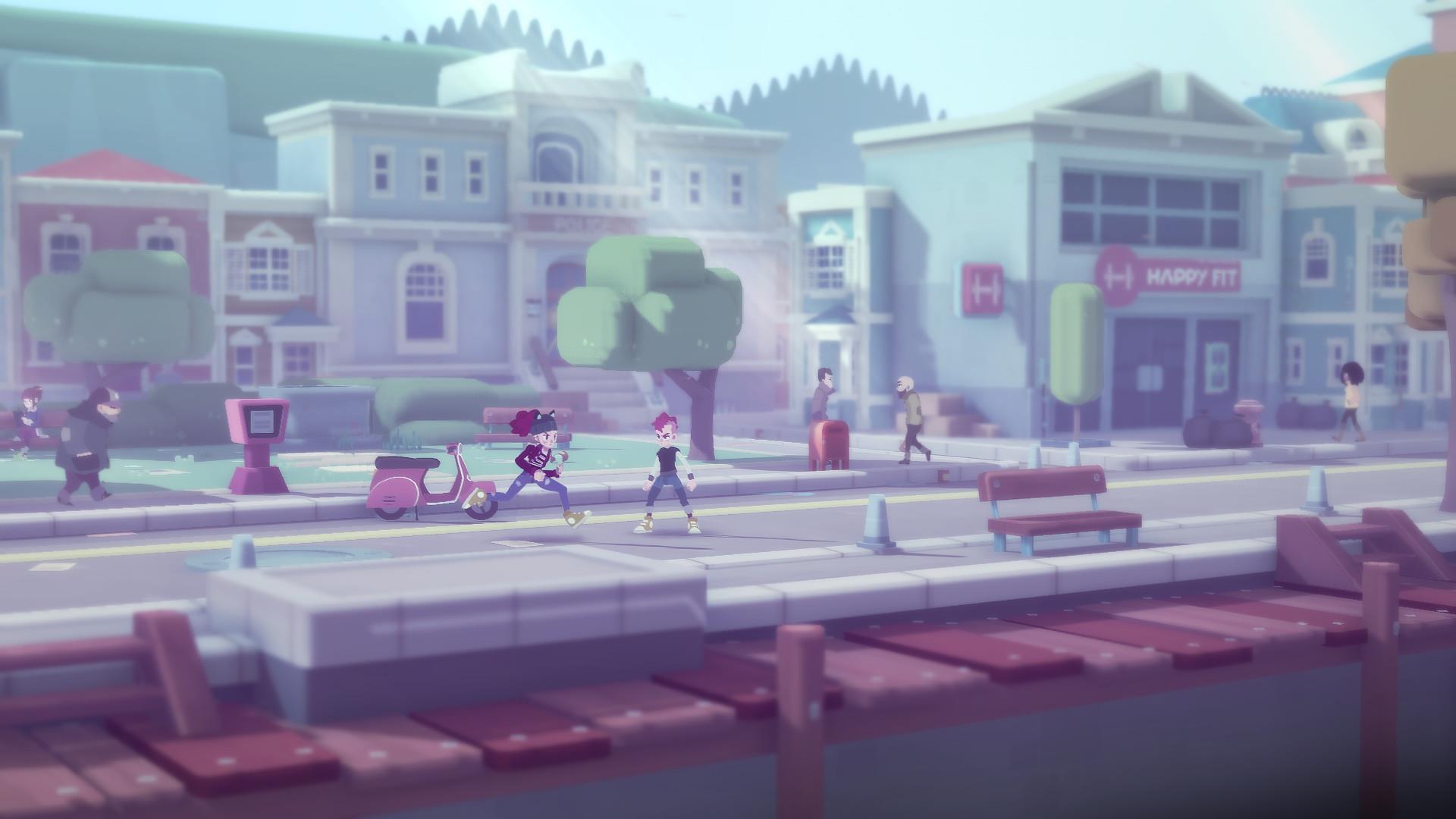 Though the game offers a local two-player option, I played the entire thing in single player, swapping between the two main characters with the L1 button on the fly, depending on the situation. As the player gains more loot additional options reveal themselves, meaning that you can assign roles to each of the twins. I turned Jenn into a slower, defense-minded character, while Tristan was my glass cannon, all dodges and heavy strikes. I pushed this dynamic even further with trips to the game's gym, which allows the player to play little button-mashing games to build up their character stats.

Between excursions into the dungeon (there's a nifty fast travel system that makes this as painless as possible), Jenn and Tristan can wander around the town on the surface, visiting shops to trade gear and chatting up the populace. Interestingly, they cannot handle any of the RPG elements of the game while in the dungeon, which means that players have to dip back to the professor's house in the "real" world to do stuff like leveling up and changing gear. At first, I kind of saw this as a hassle, not understanding why I couldn't just equip that sweet new axe I found on the fly. But after a while, I came to understand the wisdom of sending the player back and forth. This mechanic forces the player to engage in the parts of the game that don't involve just wandering around smacking dudes, precisely the elements of Young Souls that set it apart from the rest of the genre. 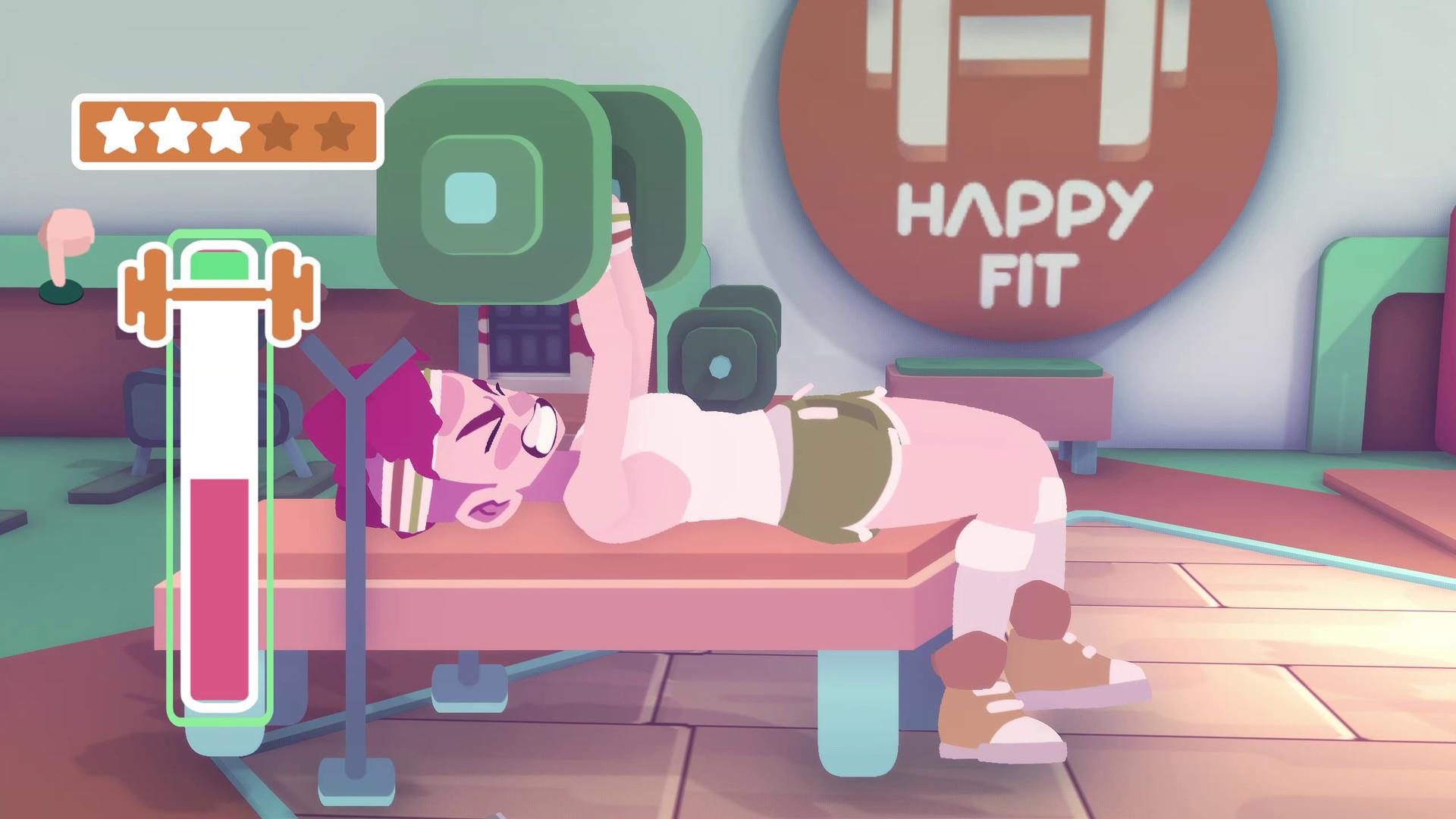 Look, I'm not proud of the fact that I had written off an entire genre of video game as being "not for me", and I'm very pleased to be proven wrong (as I so often am when I actually give new things a try). Young Souls does more than just elevate the beat-em-up genre; it goes a step further in creating a fun new world to play in, with delightful characters that show real emotion and growth. Everything in this game clicked for me, from the stellar animation to the surprisingly foul-mouthed dialogue. There's even a bit of social and political commentary in there for those that want to go looking for it. With surprising depth, both narratively and gameplay-wise, and a superb sense of wit and style, Young Souls delivers a great experience that I never thought I would have within its genre. Damn it all, video games, you keep proving me wrong.

Young Souls delivers something that I never thought was possible - a beat-em-up game with characters and a story that I actually cared about. With strong RPG elements, great writing, stellar art, and fun combat, Young Souls is worth playing even if, like me, you never gave this sort of game a second look.