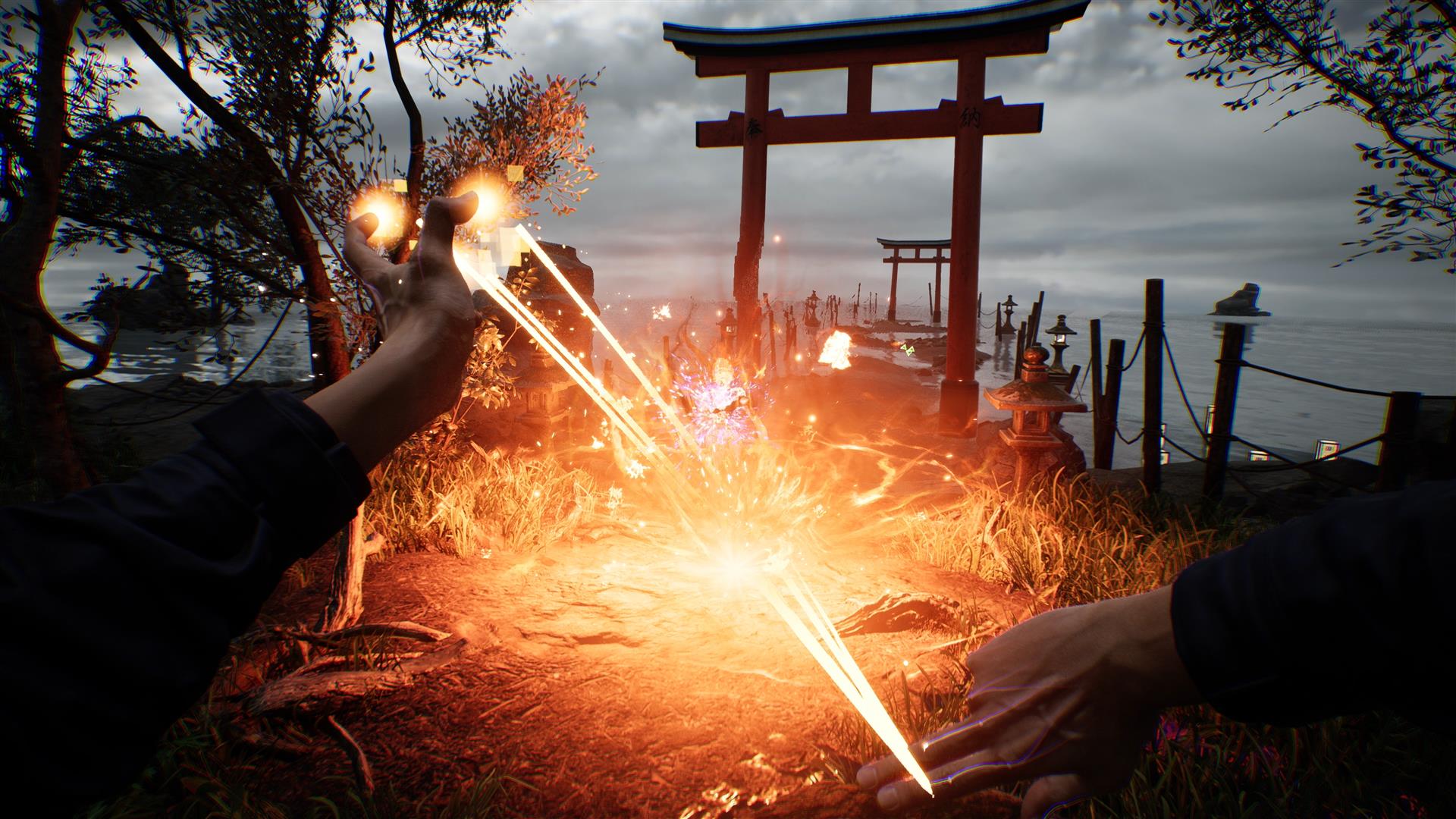 Tango Gameworks’ upcoming title Ghostwire Tokyo has always loomed in mystery ever since its initial announcement back in E3 2019. At first glance, this title might reek of horror vibes due to its name and the developers’ past work with The Evil WIthin series, but after my hands-on preview of the game up to Chapter 2, I can say that there’s so much more than meets the eye. Ghostwire Tokyo is a first person horror action stealth shooter that has a heavy emphasis on world building and storytelling. Tokyo has been infiltrated by a mysterious fog, causing everyone to disappear and supernatural Visitors to stalk the streets of Shibuya. You play as Akito, sole survivor of this supernatural event, who has been partially possessed by the spirit of a past ghost hunter named KK, in order to uncover the roots of this phenomenon and take down the man responsible for it all.

Let’s get the most obvious aspect out of the way; this game looks absolutely gorgeous, bringing out the vibrant colors of neon alleyways and billboards in downtown Shibuya. It’s sometimes difficult to discern between real life and CGI. I can’t even tell the difference between cutscene quality and gameplay quality as the two are identically detailed, not to mention the fact that game also excellently utilizes all the next-gen features of the PlayStation 5. Load times are near instant, from booting up the game from scratch to fast traveling between opposite ends of the map. Rumble and haptic feedback in the DualSense controller paired with the 3D audio from the PULSE headphones make the experience that much more daunting and immersive. The faint moaning of a distant ghastly Visitor can instantly be located thanks to the auditory response within the environment. And the reverberating rumble of the controller when I am ripping the core out of a spirit is just so satisfying and visceral. This game’s puzzles even utilize the touch pad of the DualSense controller, allowing seamless finger swipes to solve them. 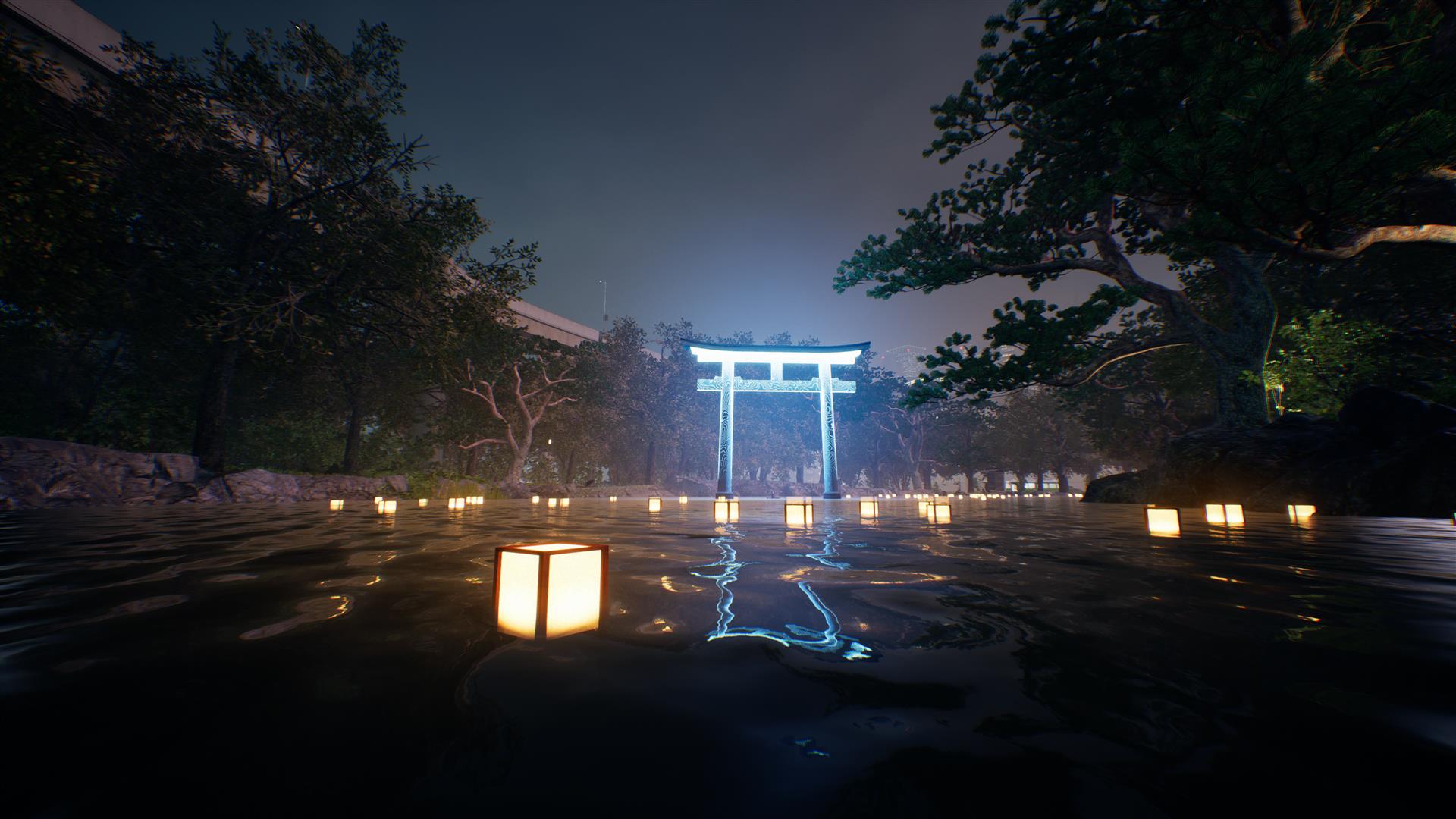 Ghostwire Tokyo is unlike any game I have ever played, as it meshes together several genres seamlessly into an experience like no other. On one hand, it’s screaming horror and supernatural with trippy visuals and dark corridors filled with evil ghosts and spirits. An added sprinkle on top that complements the horror factor is the actual representation of real Japanese yokai and folklore. From the feline Nekomata and flying Tengu to the infamous Kuchisake-onna or slit mouthed woman, this game never ceases to surprise me. I could also see some direct influences from the disturbing dreamlike mindscapes of Stefano from The Evil Within 2 in certain portions of the game. Reality becomes distorted and rooms turn sideways and upside down. No cheap jump scares, but handcrafted atmosphere and tension.

But on the other hand, the game is quite action oriented due to KK providing Akito with the power of Ethereal Weaving. Ethereal Weaving essentially turns Akito into Aang from Avatar the Last Airbender as it gives him the ability to manipulate different elements such as wind, fire, and water to shoot out varying projectiles and spells. But there’s more to Akito’s combat kit than just weaving, as he gets introduced to a bow and arrow as well as talismans to complement his role as a ghost hunter. Performing perfect parries will push Visitors back and once weakened, Visitors will have their “core” visible for Akito to purge, instantly killing them. Since he’s spiritually connected to KK, he even has an ultimate move called Wired In that can be activated which essentially turns his powers into overdrive. But that’s not all, there’s also stealth! Akito can and will get separated from KK, which will strip him of all his magical powers, leaving him with bare fists and a bow. Approaching enemies in stealth will instantly purge them and certain talismans can aid him in stealth. 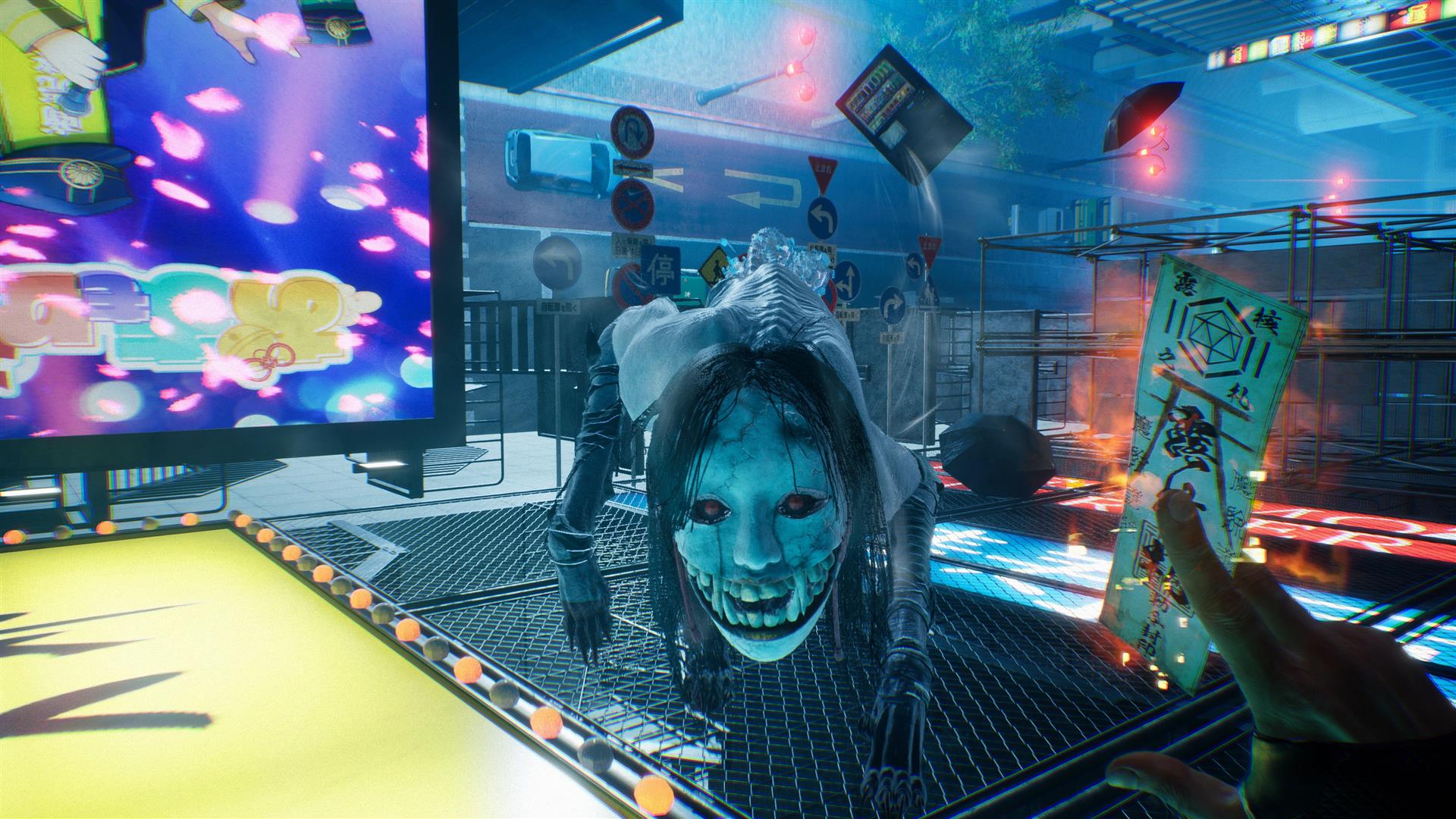 There are even detective gameplay elements woven into the game. No pun intended. Akito has the ability to activate spectral vision, which allows him to track the footprints and traces of past activity. Scattered throughout Tokyo are also investigative documents that provide more insight into the narrative and world building. The world of Ghostwire Tokyo is huge and sprawling, with most of it shrouded in lethal fog that Akito must otherwise disperse by cleansing nearby Tori Gates and shrines. The more gates cleansed, the more that can be explored, simple as that. Heck, Akito can even donate money at shrines, which grants him more luck to whatever he wishes for. Multiple dogs, specifically Shiba Inus, and cats are encountered, and yes, you can pet them and feed them! Reading their thoughts with your spectral vision and feeding them just might lead you to something special.

The developers don’t shy away from being light hearted and comedic from time to time, especially in the abundance of side quests available for you to take part of. Because the supernatural phenomenon has practically erased 99% of people from Tokyo, their spirits are left behind. A particular spirit was using the restroom and ran out of toilet paper. The mission was, yep, you guessed it, to seek out a few rolls of toilet paper for him to do his business. In a game where the protagonist is borderline edgy and angsty and the entire world is in turmoil, I definitely let out a chuckle when my main goal at hand was to help a ghost do a number two in a public bathroom. Another side mission included hunting down a Japanese yokai known as a Kappa with a cucumber, which is in fact contextually accurate to its lore and history. The attention to detail in this game is immaculate. 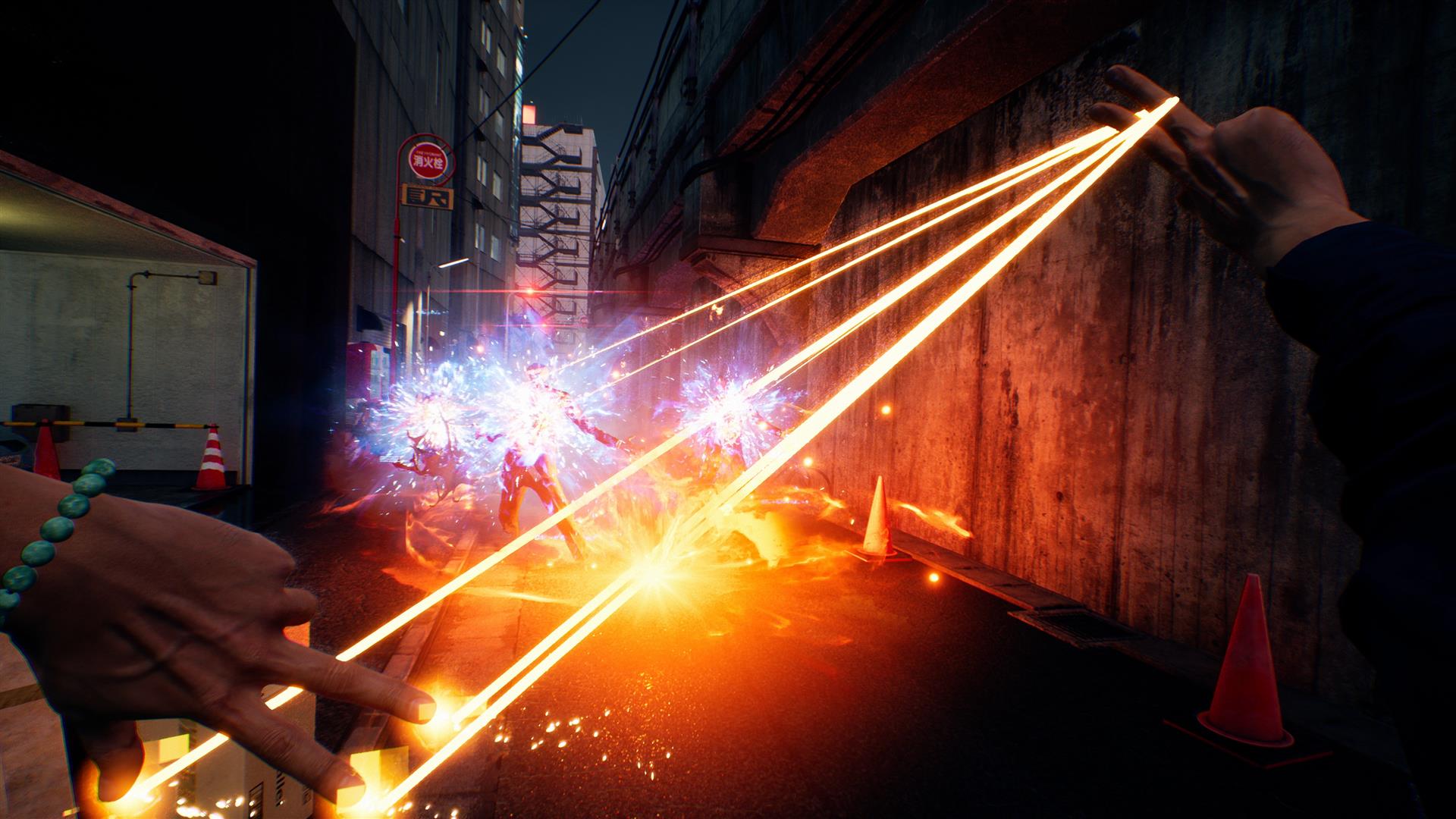 My time so far in this haunting rendition of Tokyo has been spectacular. It’s been difficult to put the controller down as I keep telling myself: just one more shrine and I’ll be done! That being said, I’m not sure when the game will get repetitive in its gameplay cycle. I haven’t done enough side missions to see if they are recycled and I haven’t completed the game, so I don’t yet  have a definitive opinion on the overarching narrative. Ghostwire Tokyo is undoubtedly a unique experience in its presentation alone. My impressions of it so far are extremely positive and I can’t wait to see what the full game is like.